‘Hybrid’ once meant ‘eco alternative’. Panamera Turbo S puts a twist on that, and begins a new chapter of flagship performance for Stuttgart

The new flagship of the Porsche Panamera range. While the previous top-shelf version in both this and the first-generation were in Turbo S form, a new Turbo S E-Hybrid version now rounds out the line-up with plug-in electric power. 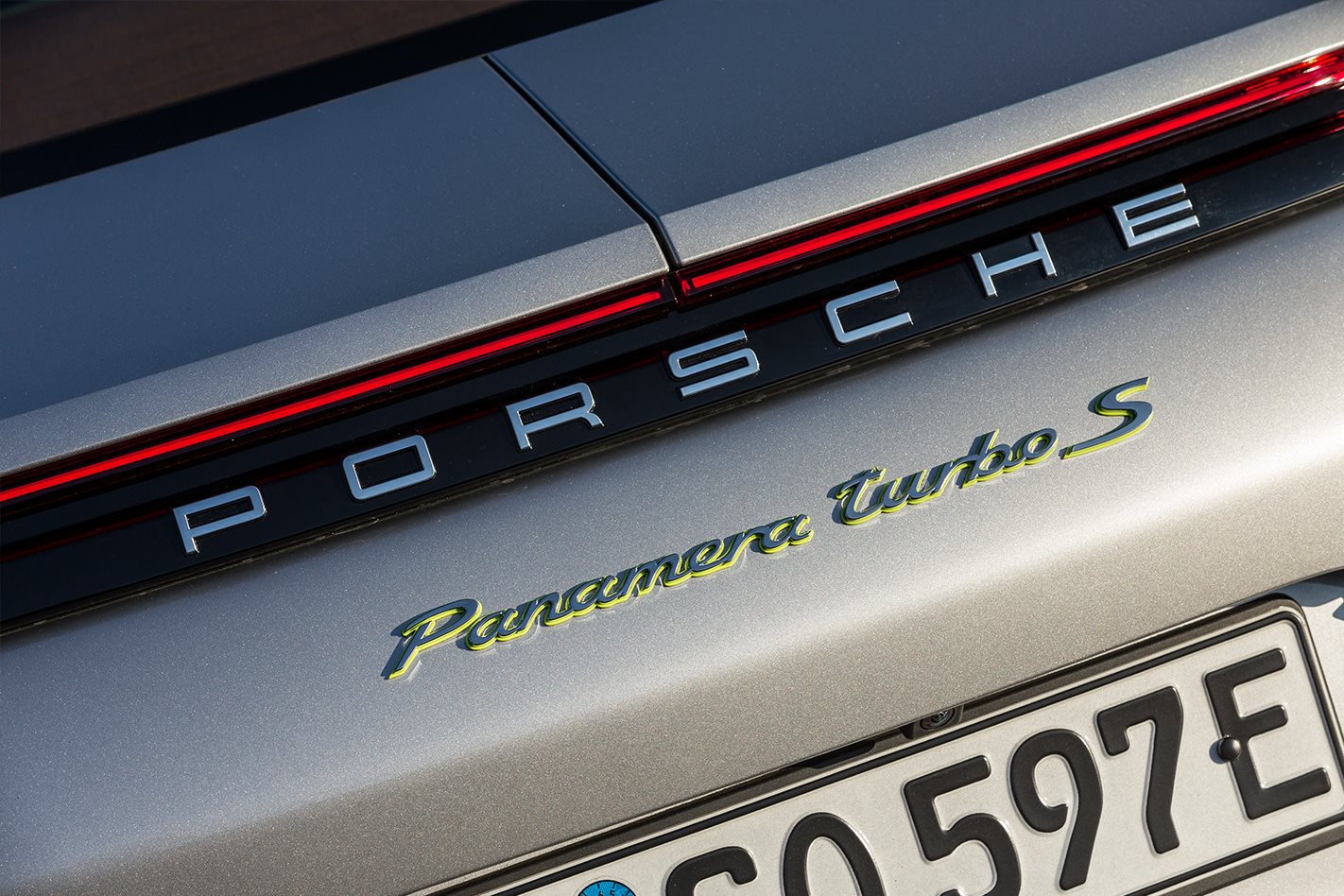 Offering a hybrid variant as the top-performing model in any model line is a first for the German car maker and a sign of intent for its future electrification strategy. From here, expect to see increasing numbers of electrified Porsche vehicles going online. If the Panamera can pull off its plug-in party trick, Porsche's demanding fans are more likely to accept others.

Porsche is not alone among revered sports car brands in taking the odd evolutionary turn that initially sits about as comfortably as a sandpaper scarf among purists.

When the iconic 911 dropped its air-cooled engine for the 996 generation, for example, diehards ran around throwing their Nomex undies on bonfires. Then, more recently, when the entire Carrera range went turbo, Stuttgart flags were burned in the streets.

Yet the 911 is still stands elevated as among the most complete sports cars of them all. (If you think otherwise, there’s still space in next month’s Inbox to air your flameproof undergarments). 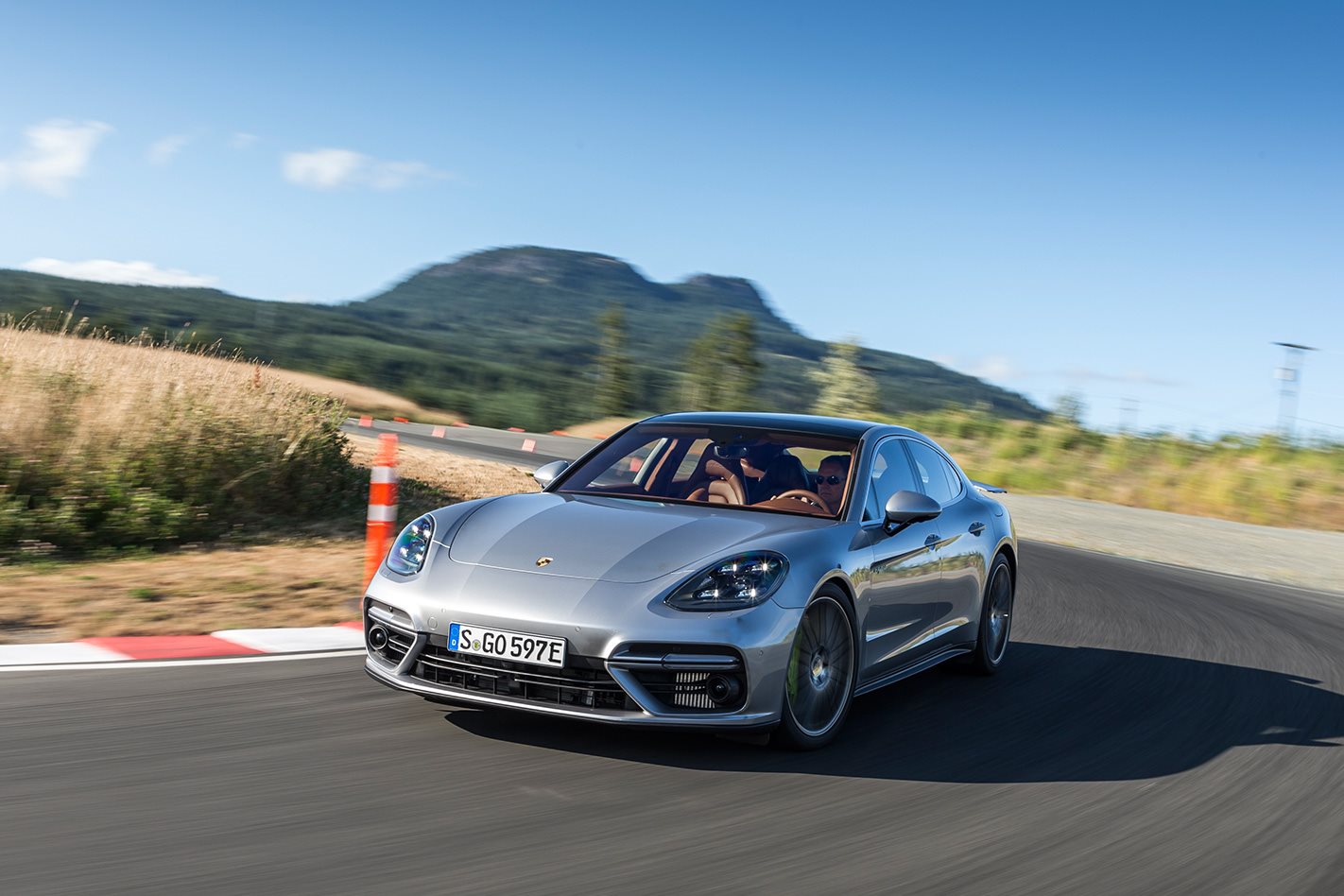 The Panamera took the converse approach by starting out with weird proportions that polarized Porsche punters right up until its replacement, thankfully, with a second-generation version that looks more like a 911 whose parents put growth hormone in its cereal – proportionally lovely, just bigger.

This new addition is the performance flagship, cementing that status through the addition of an electrically assisted powertrain. While the Panamera 4 E-Hybrid uses much the same electric hardware as this Turbo S E-Hybrid, that model plugs a gap between Panamera 4 and 4S; its focus on minimal consumption. But with this range-topper, Porsche global communications manager Herman-Josef Stappen explains that the company sets out to prepare fans for halo models that deliver electrifying performance from a battery.

“In the first generation of the Panamera the hybrid model was purely based on efficiency … now we have a new strategy,” Stappen said. “Now we go even more in the performance direction, but it’s still more efficient than the normal Turbo. The first step was with the 918 Spyder. That showed us that it could work, [now] we have done it with the Panamera. It’s no secret that there are other cars due to be revealed.” 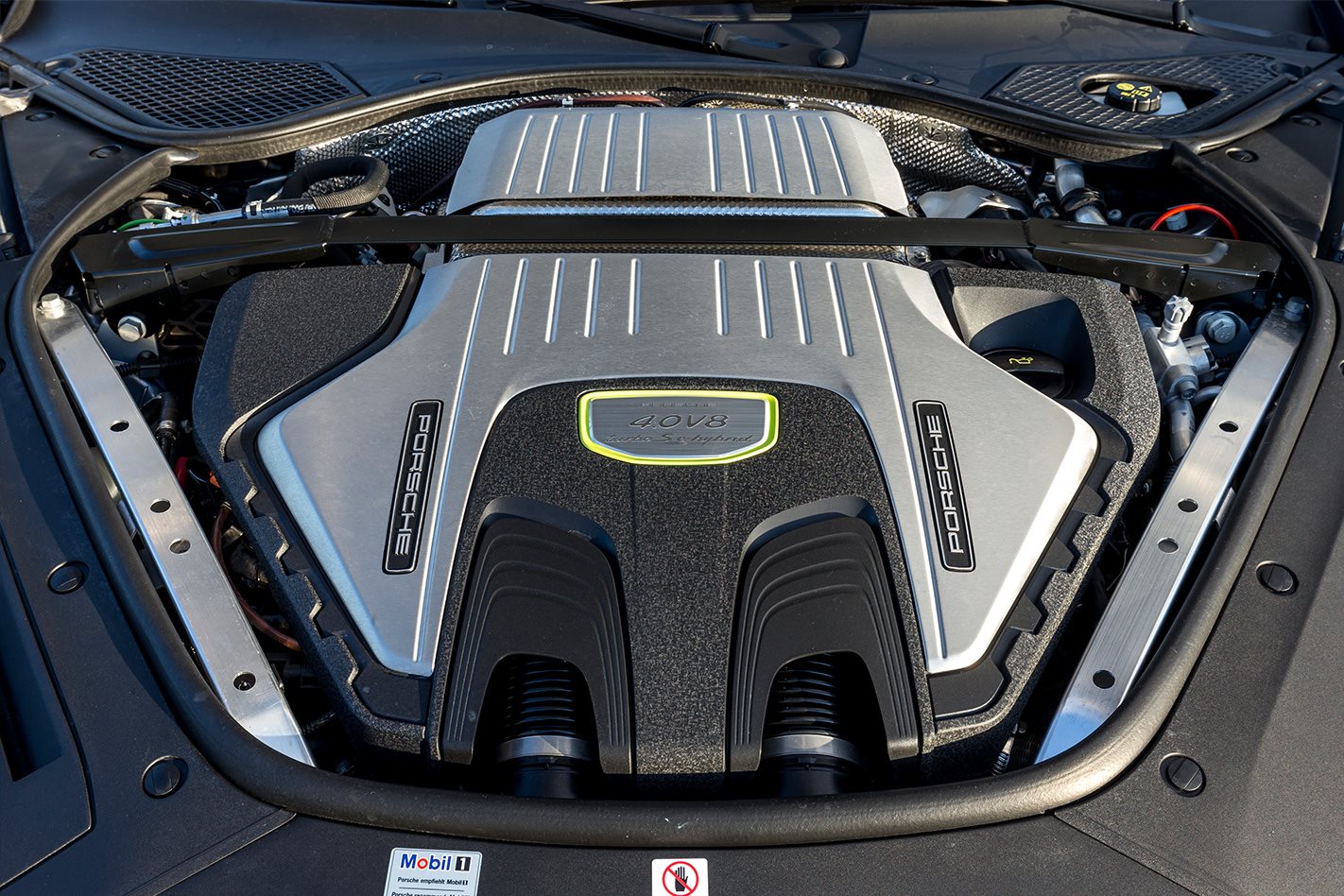 But before we get into how convincingly the Panamera Turbo S E-Hybrid delivers on its high-performance promise, let’s look at the hardware that sets it apart from the regular Turbo. In the combustion-only car, a 4.0-litre turbo V8 sends 404kW and 770Nm to all four wheels, but the hybrid Turbo S adds to this with a 100kW motor incorporated into the eight-speed dual clutch gearbox, drawing from a 14kWh lithium-ion battery.

Cost? An extra $75,600 over the price of the Turbo, and an additional 300kg to haul around, yet the advantages are clear. Official combined cycle consumption drops to 2.9L/100km while the 0-100km/h claim is trimmed by 0.2sec. As a plug-in hybrid, the Turbo S can commute up to 50km without using any fuel at all, says Porsche.

During our first blast in the hybrid Panamera on Canada’s Vancouver Island we managed to temporarily bludgeon the fuel economy figure into the 20s, but in fear of Canada’s speed enforcement – even stricter that Australia’s, would you believe – most of our road driving was sedate, which brought a corresponding drop in thirst.

Unlike some PHEVs that have a sewing machine to back up the petrol engine, the Porsche’s 100kW/400m of emissions-free electric grunt easily covers normal driving without having to poke the V8 into life. 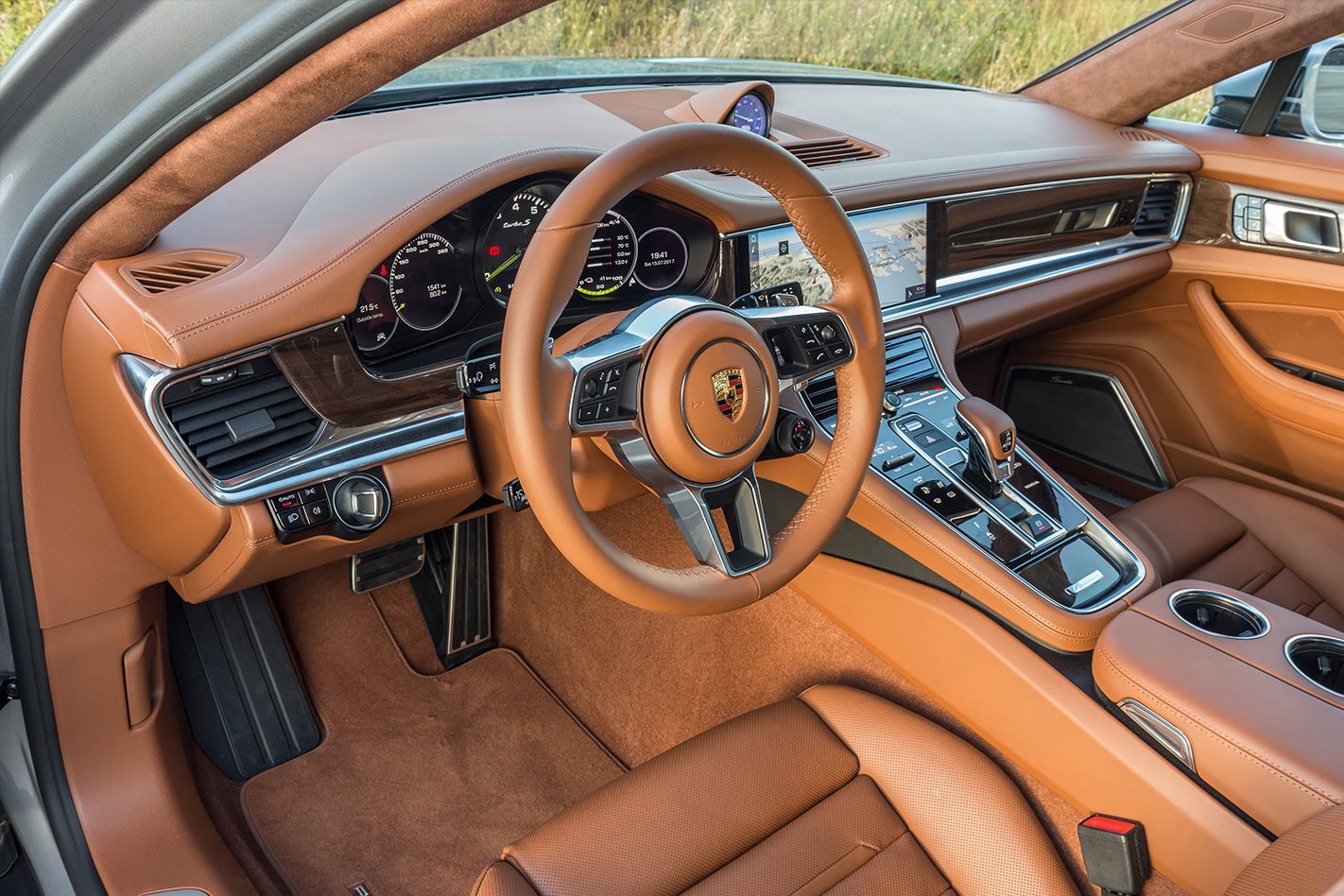 In default E driving mode as prescribed by the steering wheel mounted selector, the accelerator has an obvious detent in its travel that politely discourages you from prodding through into fossil fuel, but turn the switch to H and the notch in the throttle’s travel is removed.

The Panamera’s transition into combustion power is eerily seamless. At one point, I thought I had detected the distant rumble of the V8 firing to life but it turned out to be a Chevrolet Silverado with a side-exit exhaust pulling alongside for a closer look.

The 3996cc Porsche V8’s power is prodigious and the delivery broad, and the assistance of the 400Nm electric motor results in the most wonderfully muscular and willing powertrain.

There is little turbo lag thanks to the siting of the two turbos in the V8 valley, close to the exhaust ports, and any hint of dullness just off idle is erased by the motor. 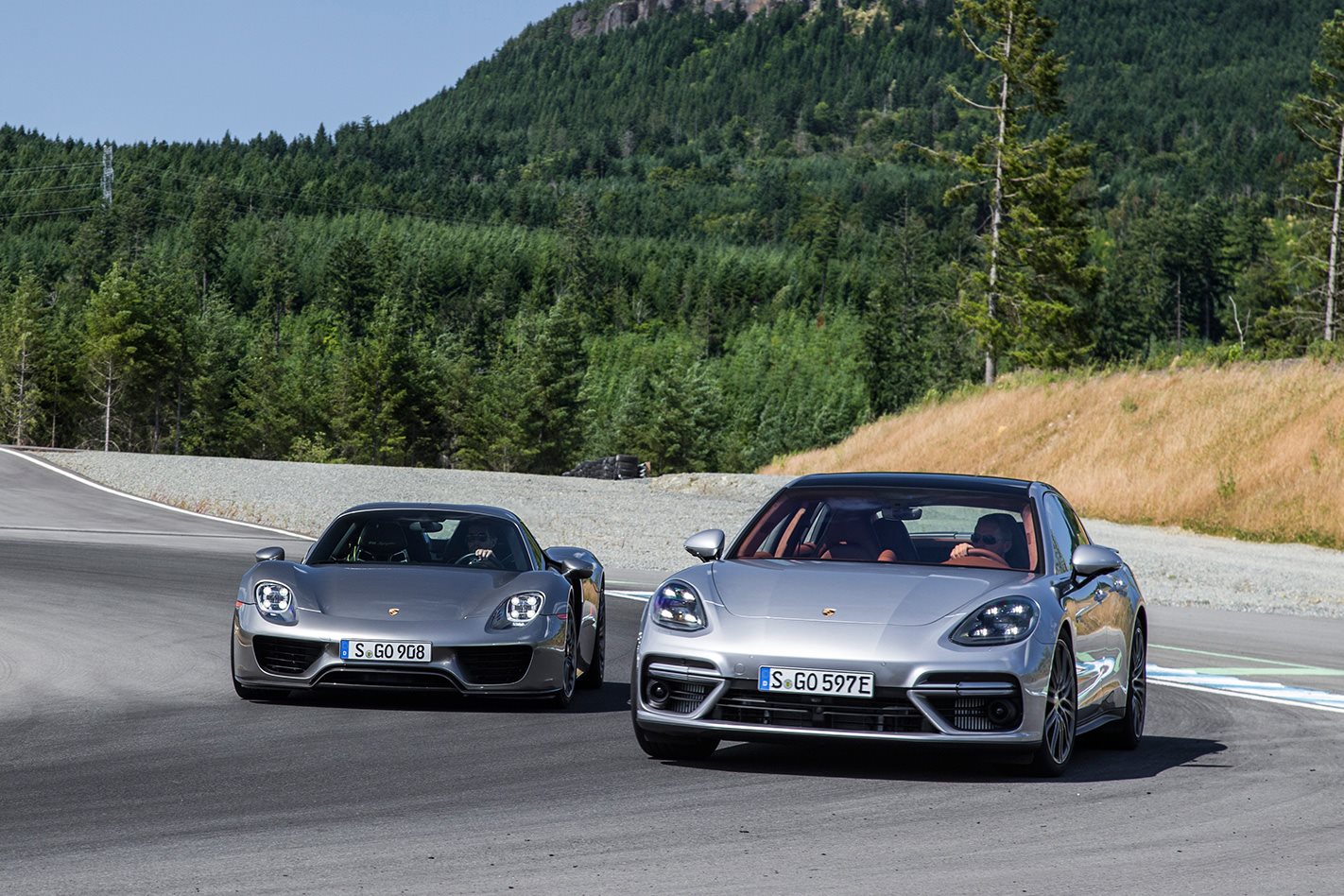 While the 2.3-tonne Panamera isn’t the most obvious track tool – especially on the tight Vancouver Island Motorsport Circuit, which packs more turns than Phillip Island into about half the distance – the Turbo S has more pleasant surprises in store.

Despite its long 2950mm wheelbase and broad 1937mm body, the Panamera carves a surprisingly precise line. In tight turns, the optional four-wheel steering can be felt providing the effect of a shorter wheelbase, mid-corner grip is bountiful and the standard-fit carbon ceramic brakes with monstrous ten-piston calipers provide terrific feel and unfading power.

Officially, the Panamera is all-wheel drive, but with the selector dialled to Sport Plus the big sedan does a convincing impression of a rear-driver. The nose tips keenly into corners with minimal complaint from the tyres and torque vectoring subtly and effectively tightens the angle of attack.

Under hard braking into the circuit’s steep descents, the tail can be shaken loose, revealing a delightful playfulness, yet can be gathered up with the chatty steering in a manner that’s uncommon in cars of this weight and size. 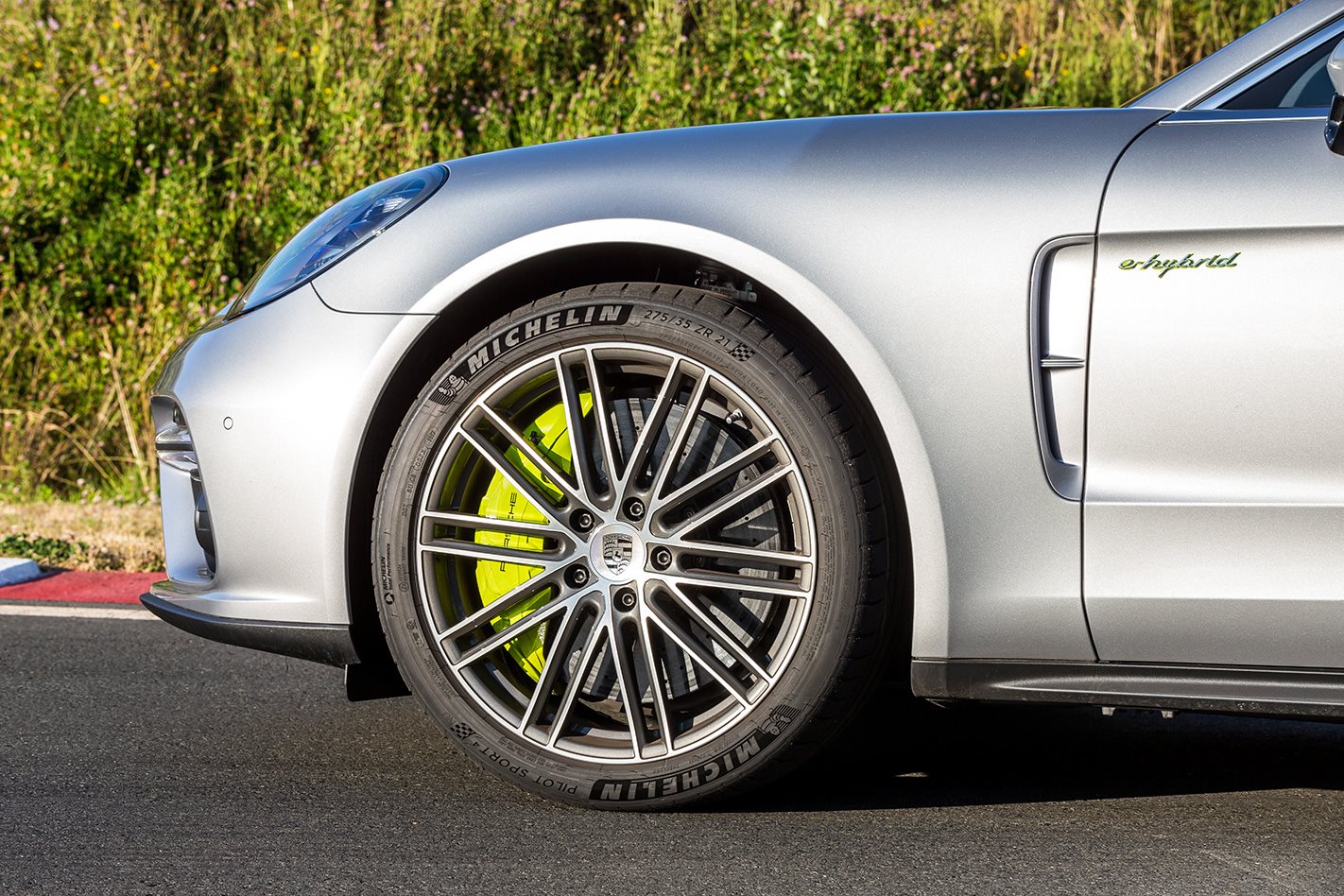 Acceleration is equally defiant of the Panamera’s weight, and the electric surge from rest would seem to support the 3.2sec 0-100km/h claim. The four test cars had been put through track punishment for more than a week by the time we strapped in, yet were showing no signs of exhaustion – typical Porsche stoicism we’re pleased to see passed on to the Panamera.

Away from the track on Canada’s iconic pine-lined roads, the four-seat powerhouse settled into duty as an accomplished cruiser, which is precisely how most customers will use their Panamera.

Although we didn’t do a back-to-back comparison, the Turbo S E-Hybrid’s ride seems just as polished as the Turbo’s and the comfort of the sports seats is stunning. Three-stage adaptive dampers and air suspension smooth all but the most offensive road imperfections and the cabin ambience is on a par with a BMW 7 Series or Mercedes S-Class.

If you’re a fan of the existing Panamera range then the good news is that, beyond the hybrid’s startling turn of speed, it’s much the same appealing package stepping from the Turbo into its electrified sibling. From the outside, there are few hints at its super-hybrid status other than Zombie Squad fluoro green badges and calipers. 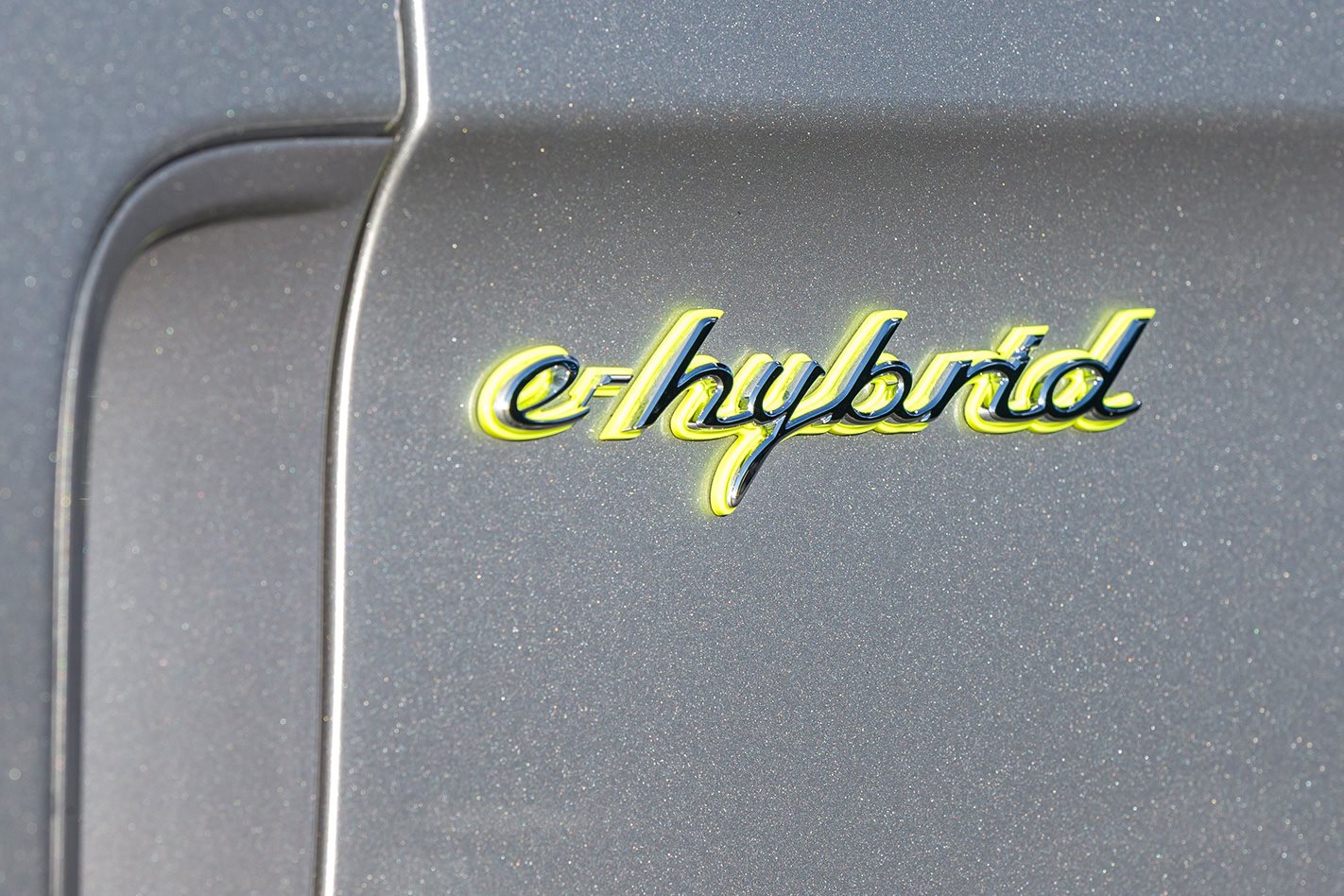 Quite where the Acid Green flashes will surface next in the Porsche line-up remains unconfirmed, but next year’s 992 911 seems a safe bet. Either way, the decision to begin the rollout of this new, performance-focused hybrid strategy with the Panamera as its ambassador, is a calculated move.

If the 911 had led the charge into electrified high-performance Porsches it’s likely to have caused seismic unrest, but thanks to the incredible abilities of the company’s first electrified range-topper and its uncompromised teaming of performance and zero-emissions capability, Porsche’s electrified future is starting to make sense.