The hooligans at Land Rover’s SVO division have obviously been studying what their AMG rivals across the Channel have been getting away with for years, deciding that Alfaterbach’s ‘too much power is never enough’ approach is a strategy worth emulating.

A leather-lined, carbon-clad flying block of flats that speaks with a plummy Brit accent… then delivers a shattering Liverpool kiss that knocks you into next week.

Why not? We were in the neighborhood (Coventry, UK, that is) driving Range Rover’s other new 2018 models, so it would have been churlish to pass up the opportunity to test this, it’s fastest and most unhinged model yet. Phwoar! We mean Phwoar! This is one seriously ballistic off-roader. It’s difficult to get your head around how rabidly fast a 2.3-tonne SUV can be once a supercharged 5.0-litre V8 is shoehorned beneath its aluminium and carbon-fibre nose, but believe us when we tell you that it works a treat. It’s quick, yes, but also deliciously rowdy, with a thunderous engine note that falls somewhere between a NASCAR at full noise and an off-shore powerboat thundering through 10-foot swell. With its sumptuous leather-and-suede-lined interior, absurdly capable off-road ability, and shattering cross-continental pace, it’s hard to imagine a better place to be when the wallopers eventually catch you and apply the cuffs. With the recent launch of Range Rover’s first plug-in hybrid electric models, one might be tempted to think the Brit brand has gone all PC and forgotten about its V8 roots.

But put that thought aside folks, because the hooligans… err, engineers at Jaguar Land Rover’s Special Vehicles Operation have provided the Ying to the PHEV’s Yang, with a supercharged 5.0-litre V8 beast that’s the hardest, fastest and undoubtedly the loudest Range Rover ever built.

Powered by the familiar supercharged 5.0-litre V8 of the previous iteration, the engine has had its wick turned up to extract an additional 18kW and 20Nm, pushing outputs to a somehow more staggering 423kW and 700Nm. Combined with some targeted weight saving initiatives, the extra Neddies help shave two-tenths off the SVR’s 0-100km/h time, stopping the traps at a blink-and-you’ll-miss-it 4.5seconds.

For those in any doubt about the pace of this thing, that’s quicker than a good number of models in Porsche’s 911 Carrera range, yet the Rangie tips the scales at almost 1000kg heavier. 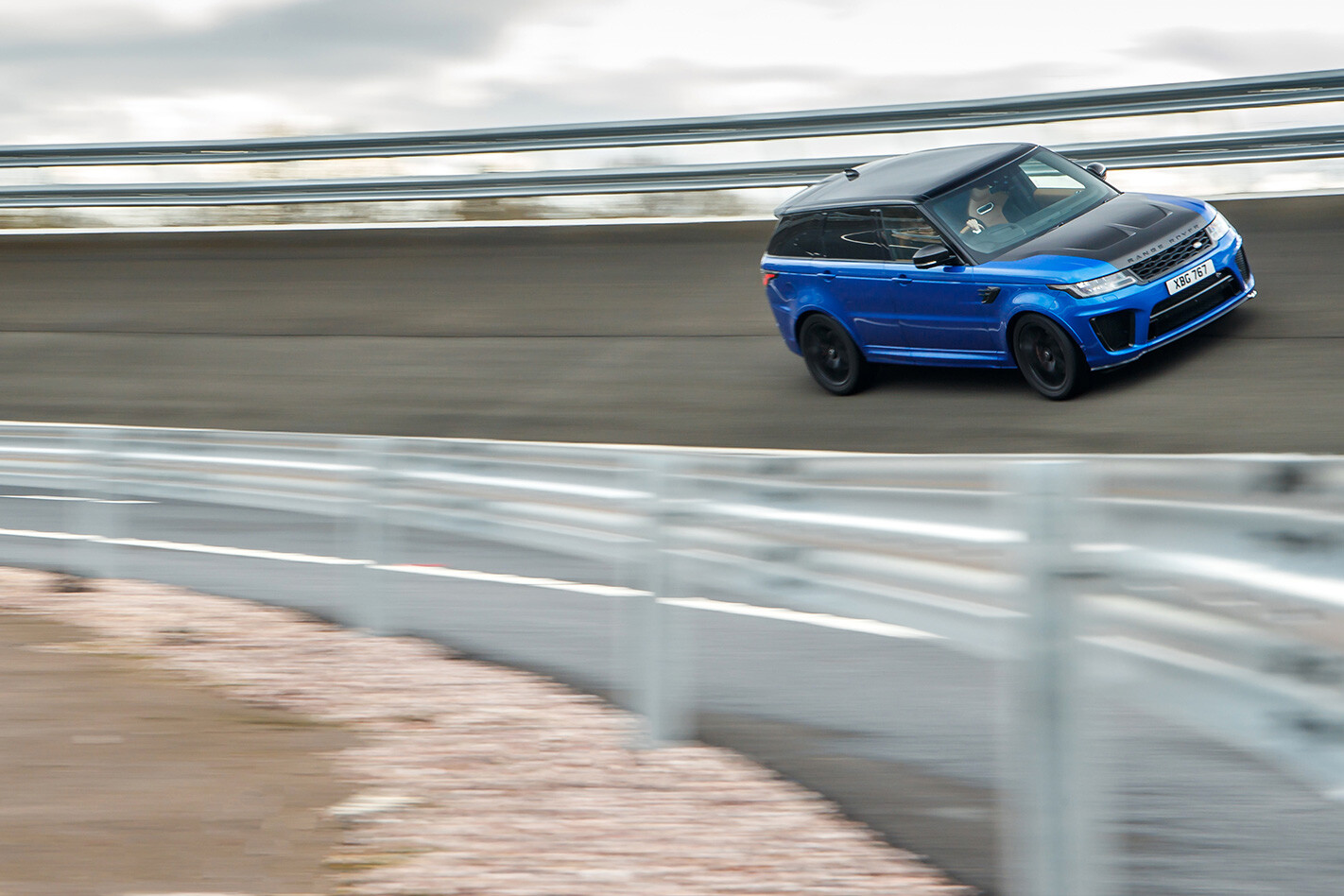 It’s absurd really that something this big can cover ground so quickly and capably, but it also makes for an absurdly fun driving experience, as we discovered during a test session at JLR’s Fen End test facility in the British Midlands.

An old WWII airstrip that’s had an injection of JLR funds to resurface and refurbish it, the track features a mile long straight on one side mirrored by a three-quarter mile straight on the other, both linked by a banked wall at top and some sinuous curves at bottom.

The instruction from JLR’s test-ride jockeys was simple enough: nail it and see what sort of pace you can muster on both straights, backing off and braking in time to ease it through the banking and the bends.

In the interests of science we tried several runs, the whine of the blower utterly overwhelmed by the raucous blast from the multi-modal exhaust system as the nose lifted like an off-shore power boat and the SVR rocketed down the strip, digital tacho racing across the dial to kiss 6500rpm before the superb ZF eight-speed auto fired home another perfectly spaced ratio. 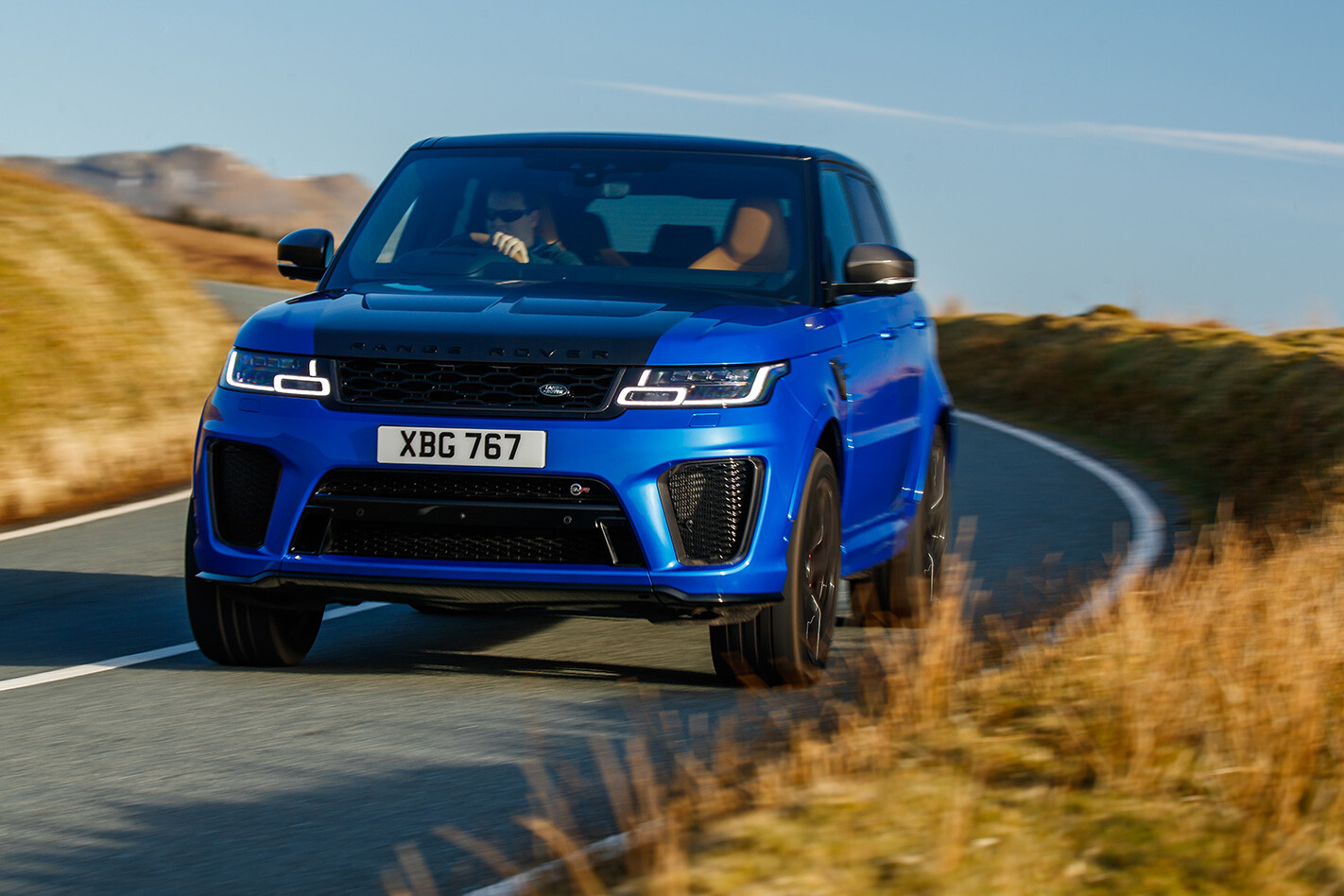 It’s an absolute hoot of unrelenting acceleration and thankfully all reigned in with big-hearted stopping performance from the ventilated front and rear discs, measuring 380mm and 365mm respectively, and delivering nicely predictable and progressive pedal feel.

Hauling at a still respectable clip through the Fen End bends did reveal that even SVO can’t defy the immutable laws of physics, and while the SVR is utterly predictable and controllable through the tight stuff, its height and weight do work against the driver’s ability to hold a smooth and progressive line.

Quite how the new SVR would compare dynamically to its predecessor we can’t say without a back-to-back test, but SVO claims to have paid attention to its double wishbone front and multi-link rear suspension, with a view to controlling pitch under heavy acceleration and braking, and tuning the dampers for better turn-in, mid-corner grip and body control.

One thing they haven’t done in making these changes is mess with the car’s impressive ride quality, and despite this being the most focused model in the Range Rover Sport lineup, it still rides lumpy and pothole peppered UK B-roads with impressive air-sprung comfort and refinement. It helps that the dynamic drive mode allows individual selection of sport or comfort for gearbox, steering, throttle and suspension, so that you can run with everything in sport but still have a compliant ride.

Stylistically, the MY2018 SVR is differentiated from earlier models with some key styling enhancements, perhaps the most notable of which is its handsome carbon-fibre composite bonnet with integrated cooling vents. The lightweight bonnet delivers real dynamic benefits but mostly just looks brilliant, displayed as it was on our test cars with the central section left unpainted to expose the eye-catching carbon-fibre weave.

There’s a new front bumper design including enhanced brake cooling ducts and slimline pixel LED headlights, new detailing on the grille and side vents, 21-inch split-spoke alloys as standard, and an SVO badge on the tailgate in place of the Land Rover badge. There’s also additional exterior design packs, including a carbon-fibre pack, which can be optioned for further customisation. Inside the cabin the SVR makes every bit as impressive a statement as out, thanks to full leather trim on dash and doors, plus a gorgeous dark suede headlining and striking new SVR performance seats clad in handsome Windsor leather and boasting 16-way electric adjustment.

Other neat features include an 825W, 19-speaker Meridian surround system and gesture-controlled sunblind and tailgate, which open when you swipe a hand or foot in their vicinity.

The SVR also gets many of the comprehensive MY18 mid-life updates that go across other Range Rover Sport models, including inter-linked dual high-definition 10-inch touchscreens and a configurable 12-inch display in the main instrument cluster, which together add a futuristic look to the beautifully trimmed and presented cabin.

The MY 18 Range Rover Sport SVR is available for order from Australian dealers now, with the first dealer cars arriving in late March or early April.