Some are born great, while others have greatness thrust upon them. Then there are those who achieve greatness over time through a process of hard graft. It’s into this last category that the Mercedes-AMG GT falls.

We’ve always wanted to love AMG’s testosterone-fuelled two-door, a brawny, bent-eight alternative to the Porsche 911, but the expectation has never quite lived up to the reality. Head-smashing performance has always been a given, but over-sensitive steering, an allergy to bumps and unresolved handling have taken the edge off. 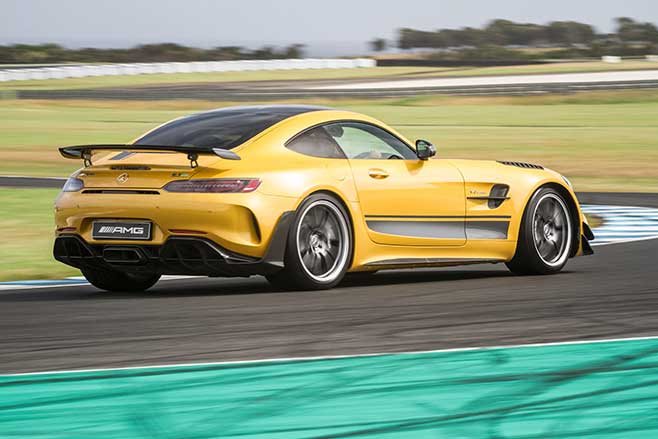 Over the years AMG has chipped away with tweaks here and adjustments there and it’s now all come together in an unlikely fashion with the GT R Pro. The Pro is to the GT R what the GT3 RS is to the GT3 – a harder, sharper version focused on circuit performance.

A hardcore, road-going track car doesn’t sound like an obvious candidate for cohesion and the confusion deepens when a look at the spec sheet shows that the Pro has no more power than the GT R on which it is based. Nor is it any lighter. 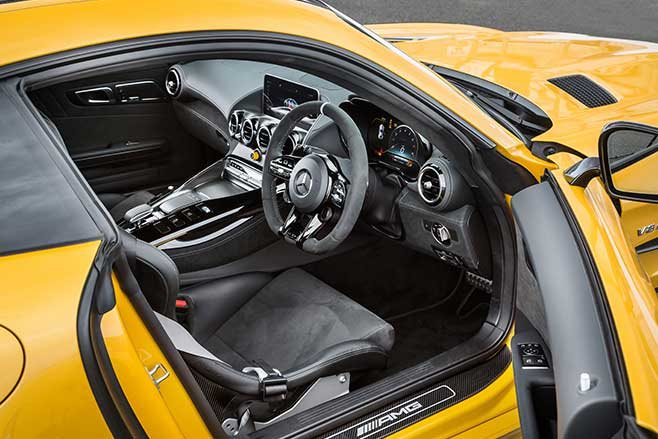 The gearbox is the same, as are the wheels and tyres, so consequently performance is also identical. Figures of 430kW/700Nm, 0-100km/h in 3.6sec and a 318km/h top speed aren’t exactly shabby, but it’s difficult to see where progress has been made.

Carbon-ceramic front brakes (using massive 402mm discs) are standard, but that seems a fairly lean return for the $84,500 price premium over the ‘regular’ GT R. To appreciate the Pro you need to delve deeply into the details. 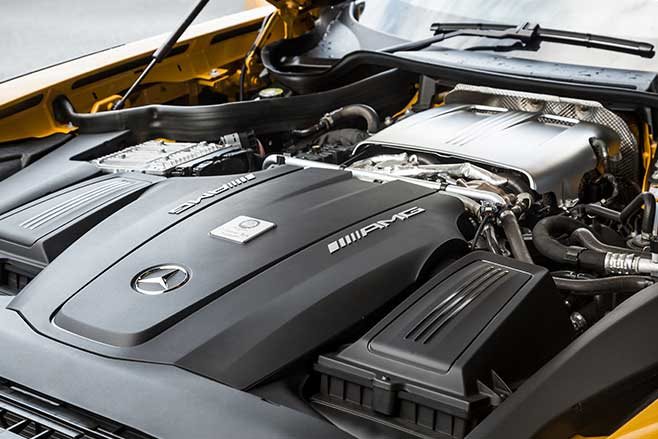 Weight has been saved, but it’s also been replaced in the form of a body-stiffening roll cage and underbody carbon fibre shear panel. The standard adaptive dampers have been jettisoned for manually-adjustable coilovers, tuneable for rebound and high- and low-speed compression, the carbon front anti-roll bar and hollow steel rear are likewise adjustable and there are uniball bearings for both the upper and lower wishbones to eliminate any slack.

Finally, there’s the aerodynamic addenda that have sprouted all over the GT. The front splitter has been extended (and can be extended further via a button on the centre console), new aero flics threaten the shins of witless pedestrians and louvres above the front wheels vent turbulent air out of the guards 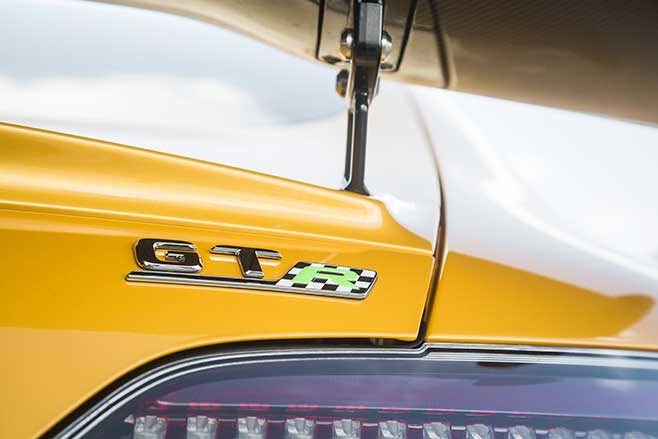 At the rear a re-designed carbon fibre roof lowers the centre of gravity, carbon panels at the rear help direct airflow and the massive wing has been enhanced with a gurney flap. In total, an extra 99kg of downforce is produced at 250km/h.

The other way to identify the differences between the GT R and the Pro is to drive them. From the first turn of the steering wheel the Pro makes its case with more weight and a greater connection to the razor sharp front end. 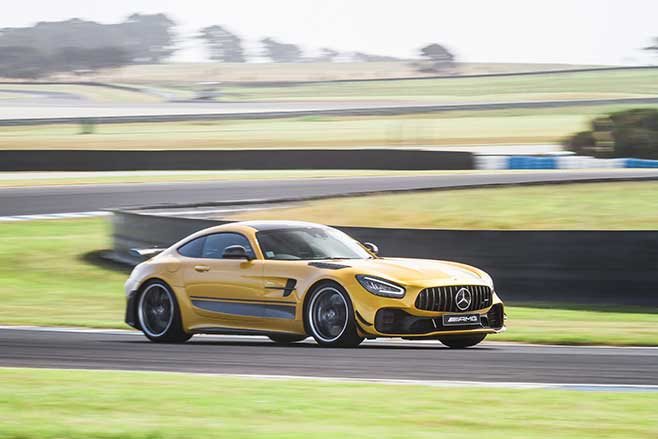 There is a slight delay on centre before it reacts very quickly, presumably a result of the all-wheel steering, but it’s easy to adjust to and once dialled in you needn’t give it a second thought, the 275mm front Michelin Pilot Sport Cup 2s scribing your chosen line like a slot car.

Lateral grip is astonishing, as is traction out of slower corners, though if you’re clumsy with the throttle wheelspin can be checked with either the ESP Sport mode or a few flicks of AMG’s 10-stage traction control system. The four-point harnesses are necessary to keep your body located and make a huge difference to the driver’s ability to feel what the car is doing at the limit. 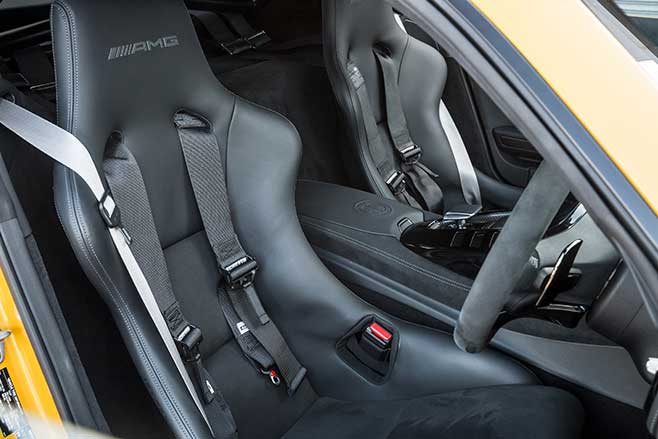 Power might remain the same but there’s enough for truly brutal acceleration; power tails off slightly around 6500rpm but each upshift plunges you deep into the pool of torque and the noise the dry-sumped V8 makes should carry an adults-only warning.

Most incredible of all are the brakes; even with massive closing speeds they can be applied ridiculously late, the Pro hunkering into the ground and shedding speed like a parachute’s been pulled. They also simply refuse to tire, nor do the, err, tyres, remaining consistent lap after lap after lap. 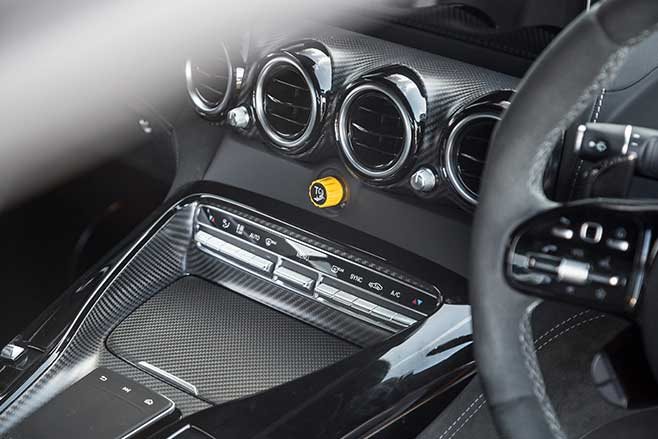 The only criticism to point the Pro’s way on track is that entering Phillip Island’s quicker corners its weight becomes apparent, the car taking a fraction of a second to settle after turn-in. This has the potential to be scary when speeds are north of 200km/h but such is the feedback and confidence the rest of the package provides that it only needs to be observed, not reacted to.

Of course, that a high-end, track-focused car works well on a dry, warm racetrack perhaps isn’t a revelation, and it must be said that at the first sign of moisture the Pro becomes about as potent a weapon as an over-cooked noodle, but in the environment in which it’s designed to work it is absolutely phenomenal.

There are also questions over the Pro’s road usability, as our first taste was limited exclusively to Phillip Island, but sadly it’s somewhat a moot point as just 15 of the worldwide production of 750 are coming to Australia and all are spoken for, even at a base price of $453,200.

Nevertheless, the Pro has realised the GT’s potential. By abandoning any pretence of civility and unleashing the monster within, AMG has created something truly great.