There’s never been a better time to review the dual-cab 4x4 class of 2016 than right now. Wheels pitches eight of the biggest sellers in the segment for the title of King of the Heap. Here's number seven, the Holden Colorado.

There’s never been a better time to review the dual-cab 4x4 class of 2016 than right now. Wheels pitches eight of the biggest sellers in the segment for the title of King of the Heap. Here's number seven, the Holden Colorado.

HOLDEN’S entrant may have a face that clearly links it to the family, and a Lion logo the size of a Frisbee, but it was developed by GM in Brazil, has an Italian engine, is built in Thailand, and shares chassis and body hardpoints with the Isuzu D-Max. The tuneable bits (springs, dampers and anti-roll bars) received attention from Holden, with a softer tune to make on-road dynamics more palatable for buyers used to unibody SUV comfort levels. 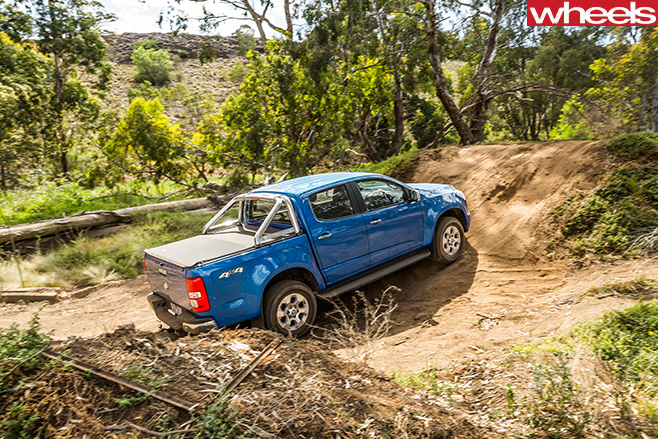 Before we get to that, though, we need to get past the lack of cabin ambience, the hard plastics, the flimsy storage compartment lids, the fussy and dated instruments, and the fact that even in this LTZ spec (a grade higher than much of the field here), any sort of service like navigation requires your smartphone and your data. Our test car’s seats are finished in grey vinyl-look leather while the gloss black trim in the centre console and around the circular HVAC system does little to distract you from the obvious cost-cutting. 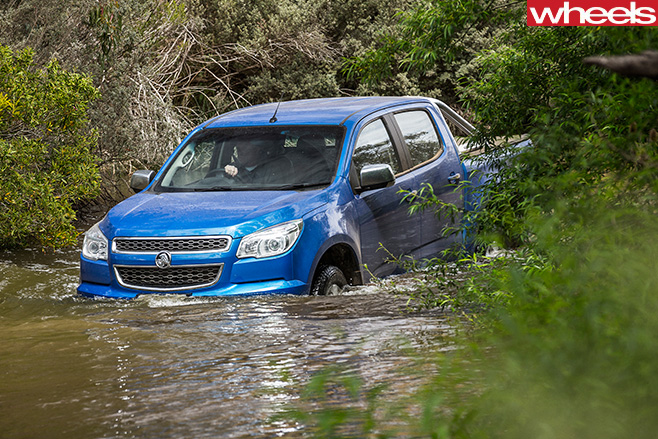 This could be overlooked if the powertrain was a model of refinement and efficiency, but it’s not. The big four-pot – 2.8 litres, force-fed by a single turbo – comes from VM Motori, now owned by Fiat-Chrysler, which relieved GM of its 50 percent stake in 2013. It takes only minutes behind the wheel to realise why GM wanted out. Despite the addition of extra sound insulation as part of last year’s MY15 upgrades, it’s still loud for this class and objects to being revved. And it only meets Euro 4 emissions, not the Euro 5 standard achieved by the others here. 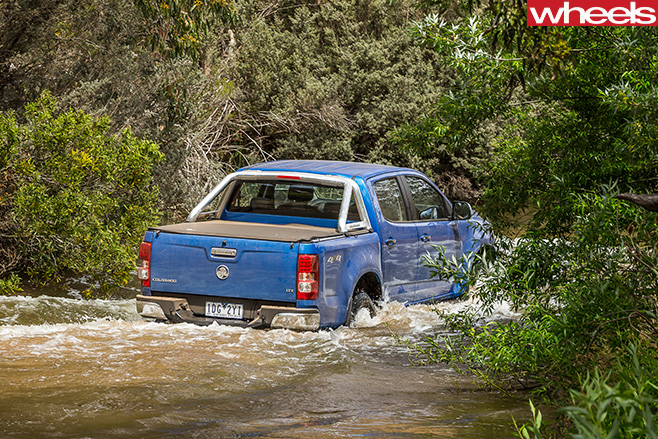 On the road, the big Holden is passable provided you don’t ask too much of it. The engine’s gruffness and noise is only intrusive beyond the peak power point, and GM’s six-speed auto does a decent job of upshifting early to tap into the bottom of the solid, but narrow, torque spread to keep the big rig surfing along. Driven flat-out it’s even (just) quickest in class, though other issues make that inadvisable. 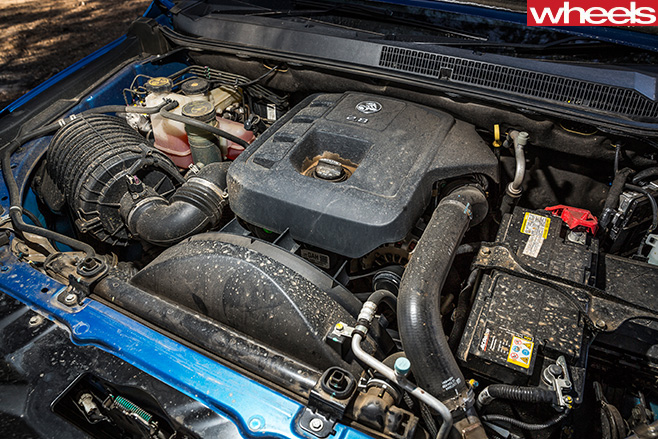 The move to softer chassis settings makes the Colorado less jarring and uncomfortable than before, but on any typically lumpy B-road there’s a problem with the relationship between the cabin and what’s going on down at road level. The body wobbles on the chassis as though the two elements are connected with jelly pots rather than anything you’d find in the hardware department. Hit a bumpy section and the wheel shimmies in your hands, as the whole plot quivers and quakes.

On dirt, the ESC is deftly calibrated to quickly curb spinning wheels and gently restrict slides, but over corrugations the steering kickback reaches eye-widening levels. At least the fast-acting ABS allows you to quickly scrub off speed to something less likely to cause further affront from the steering. 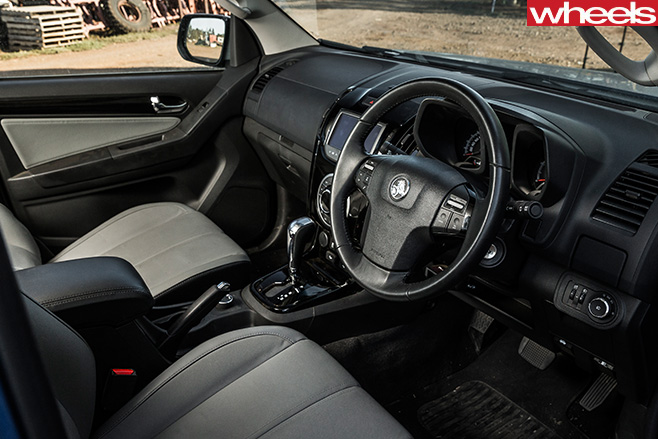 It’s a shame the platform and engine are well short of what’s needed, but Holden is working on another round of upgrades (due later this year) aimed at addressing drivetrain NVH issues, and improving cabin quality and functionality. We’re not expecting miracles, but if you’re wedded to the brand, it could be worth waiting to see what the updated model brings. For everyone else, keep reading.

Like all the contenders here bar the Amarok, the Colorado offers a low-range four-wheel-drive mode. But the lack of a rear diff lock does put it at a disadvantage when the going gets properly steep and snotty. Granted, most owners would not attempt the almost absurdly steep and deeply rutted trail used by our test team, but it was telling that more than half the field was able to make the climb. The Colorado didn’t – only just – once the rear axle hit max articulation and traction headed south. 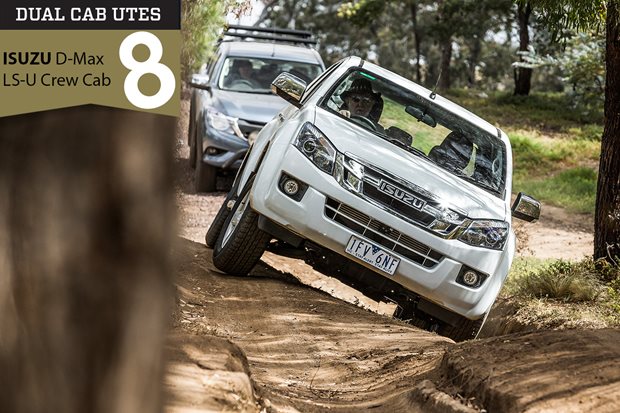 There’s never been a better time to review the dual-cab 4x4 class of 2016 than right now. Wheels pitches eight of the biggest sellers in the segment for the title of King of... 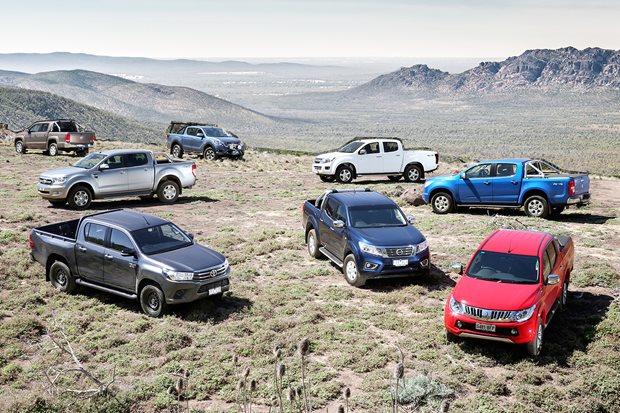 At work or play, these are the utes Australians are buying in increasing numbers. We put ’em to the test, on the road and off it, to find the best 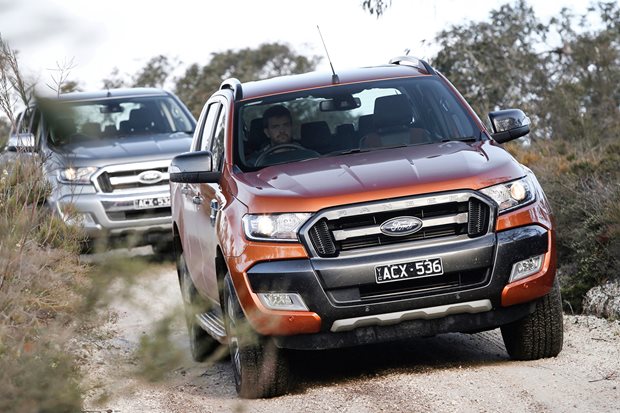 Ford has refreshed its popular Ranger ute for 2016, with styling and tech upgrades aimed at making upper-spec XLT and Wildtrak double cabs more attractive for families