Forget crash-test results, or how many airbags your truck has, because you’re looking at the safest SUV on the planet. And we’ve driven it.

GET out a magnifying glass, take a real close look at the photographs and tell me what you see.

This was first published in 4x4 Australia’s December 2012 issue.

You’d be safe in assuming the vehicle is a stock-standard Range Rover Vogue, right? Well, no. I’ll bet you didn’t notice the bulletproof glass, or the heavy-duty wheels with run-flat tyres, or the tamper-proof exhaust. This is an armoured Range Rover and, as such, you won’t find anything so crass as chequer-plate, slits for windows, gun ports, or a half-track under its bum. 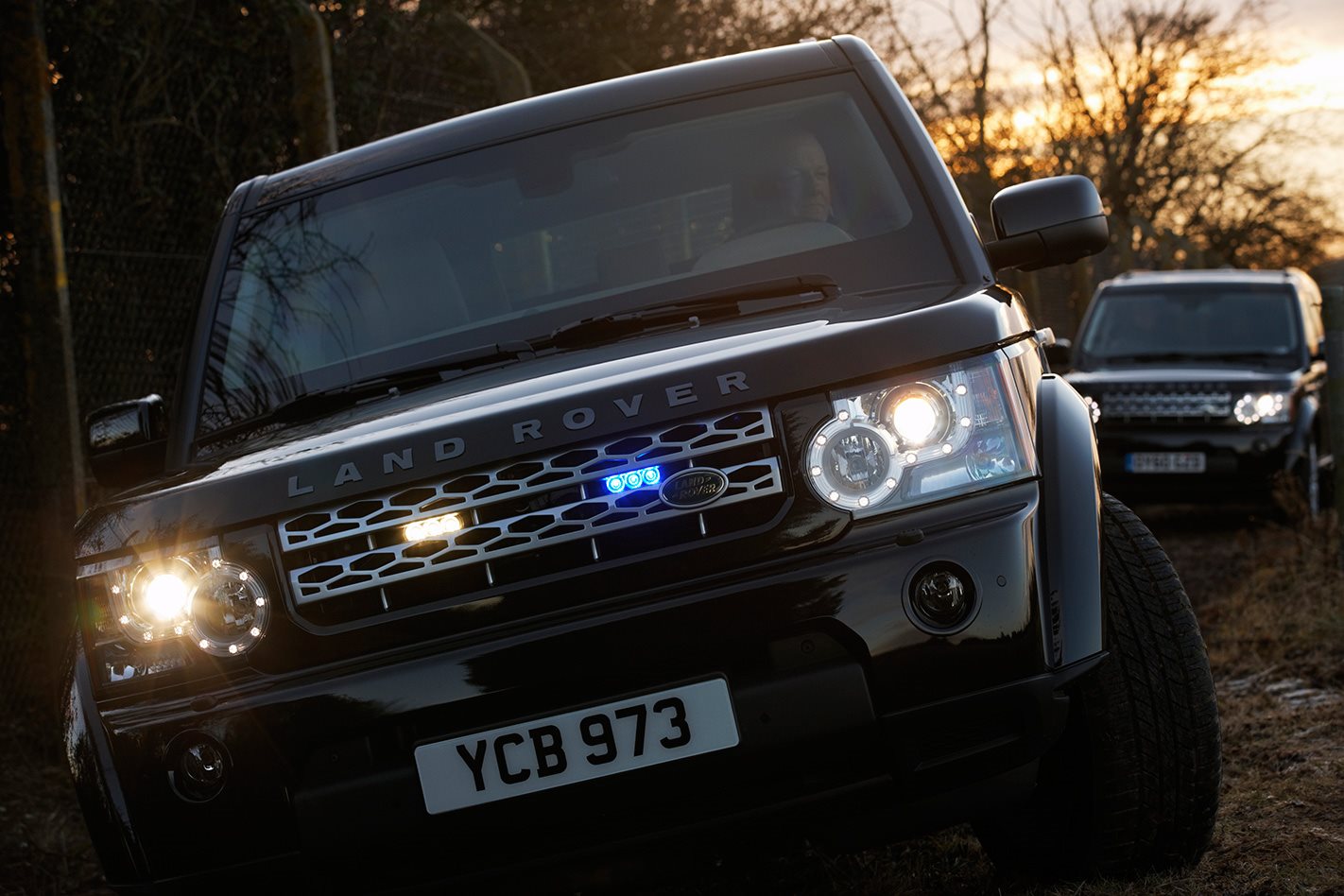 “This isn’t a battlefield weapon,” says Land Rover’s Armoured Vehicle Driver Trainer, Ian Halton, as he points out all of the toughened bits of the car the LR watchdogs won’t let us show you. Sorry.

There are overlaps on all the doors, even on the rear-boot lid, to ensure ‘splash’, or molten metal/shrapnel can’t penetrate door shuts or handles; the petrol tank is wrapped in armour; and the battery is stashed inside an armoured box in the boot. Even the exhaust pipe is fitted with mesh to prevent tampering.

The body provides 360-degree protection with ballistic and blast steel, and Kevlar armour is hidden beneath the Range Rover’s skin. Indeed, the outer skin is a façade only and so it can be stone-chipped, dented by a shopping trolley or even two-bobbed. 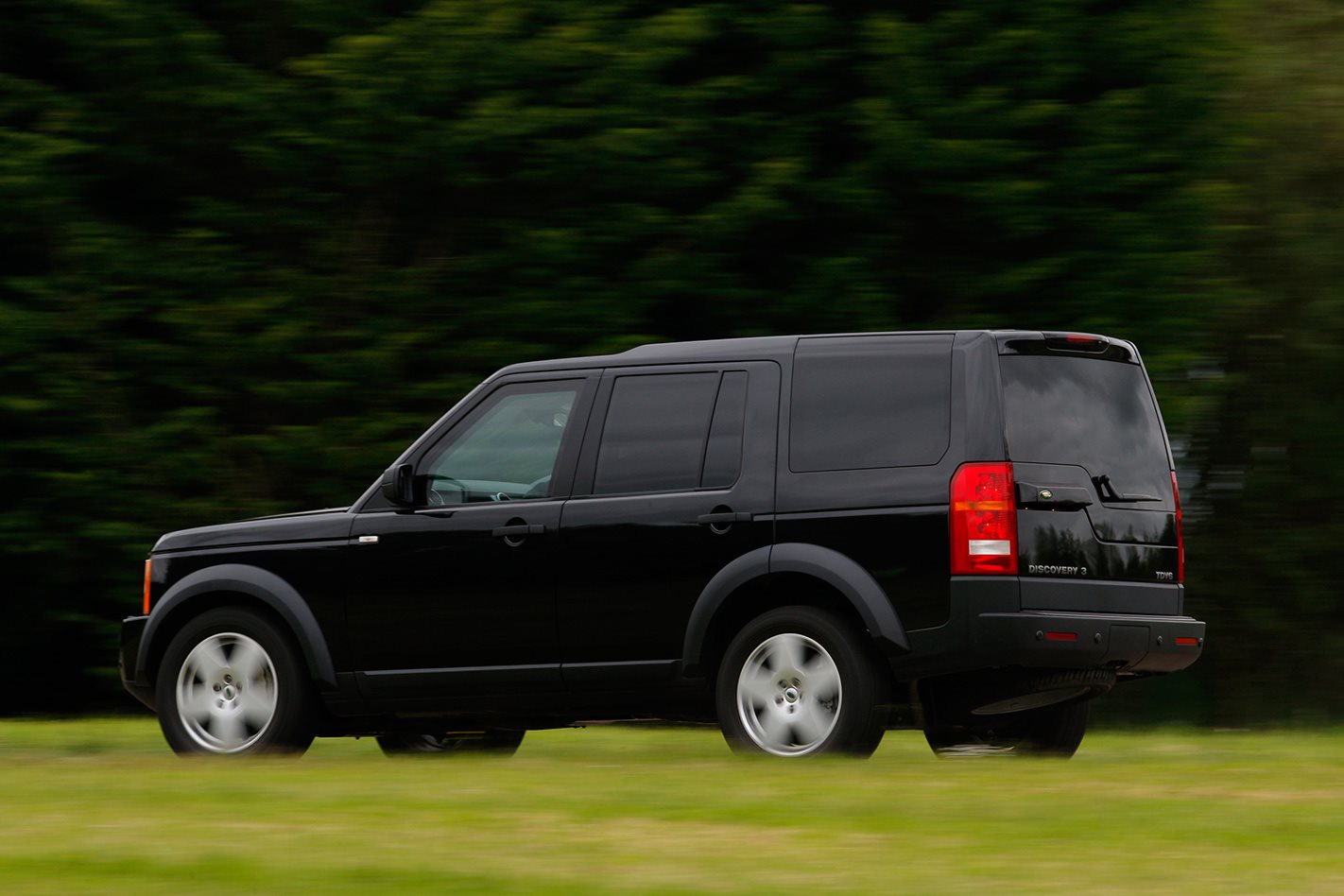 “It’s designed not to be noticed, which is probably its greatest defensive asset,” says Halton. The plasma-cut, fixed-in-place, 40mm-thick toughened and heavily tinted glass is noticeable, however, but only if you catch it in the right light, at the right angle.

So, to the untrained eye, there’s nothing to suggest this car could step into the ring with two handfuls of hand grenades or an AK-47 and come out looking like anything other than a smouldering ruin. But it can. The Range Rover you see on these pages has been armoured to within an inch of its life, which is the not-so-technical speak for B6-plus. It’s a virtual bunker.

And to prove that point, Halton flips open his laptop, runs a film and starts narrating: “That rig next to the Land Rover Discovery [armoured to the same level as this Range Rover] holds 15kg of high explosive.” Then he’s silent… nothing… nothing… nothing… then… kaboom! 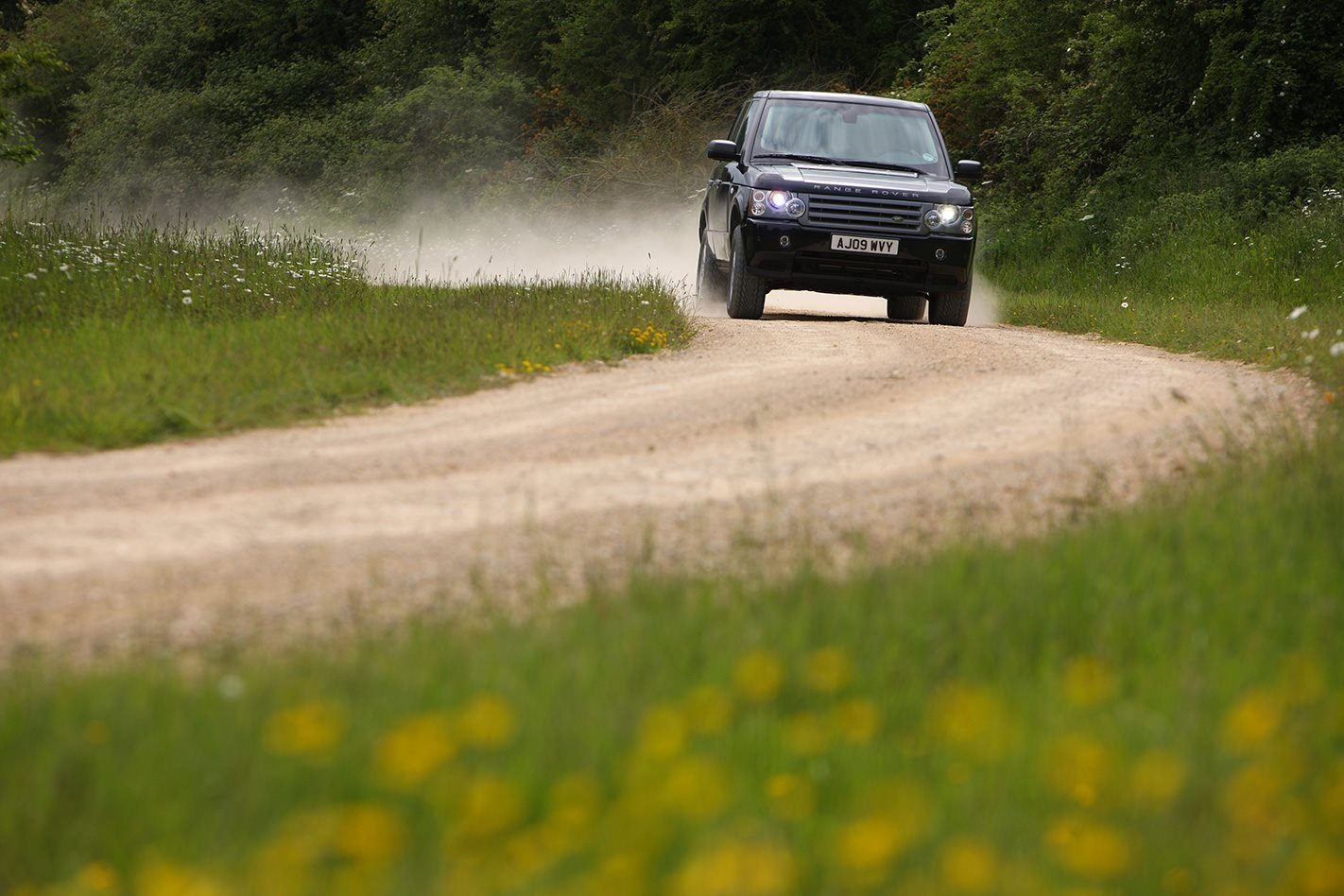 It’s the sort of explosion you see in a Hollywood movie, or see the aftermath of on the news; the sort of explosion that would reduce four or five regular cars to black smears on the ground. Only when the smoke clears, the Disco is anything but a smear. Sure, the glass is crazed, the bonnet has been blown off and is God-knows-where, the outer skin has been shredded, and the tyres look ruined, but the vehicle is still standing.

“That car was able to be driven away from that explosion and the passengers would have survived,” Halton says as my jaw hits the table. He then shows me police footage of the Thai Prime Minister’s lightly-armoured S-Class being attacked during the 2010 riots in that country.

“The driver, in this instance, got himself trapped in the hotel compound and so, with almost nothing more than a few plastic garden chairs, pot plants, and flip-flops [thongs] the protestors almost gained access to the Prime Minister. Only the organisers calling off the attack saved the situation.” 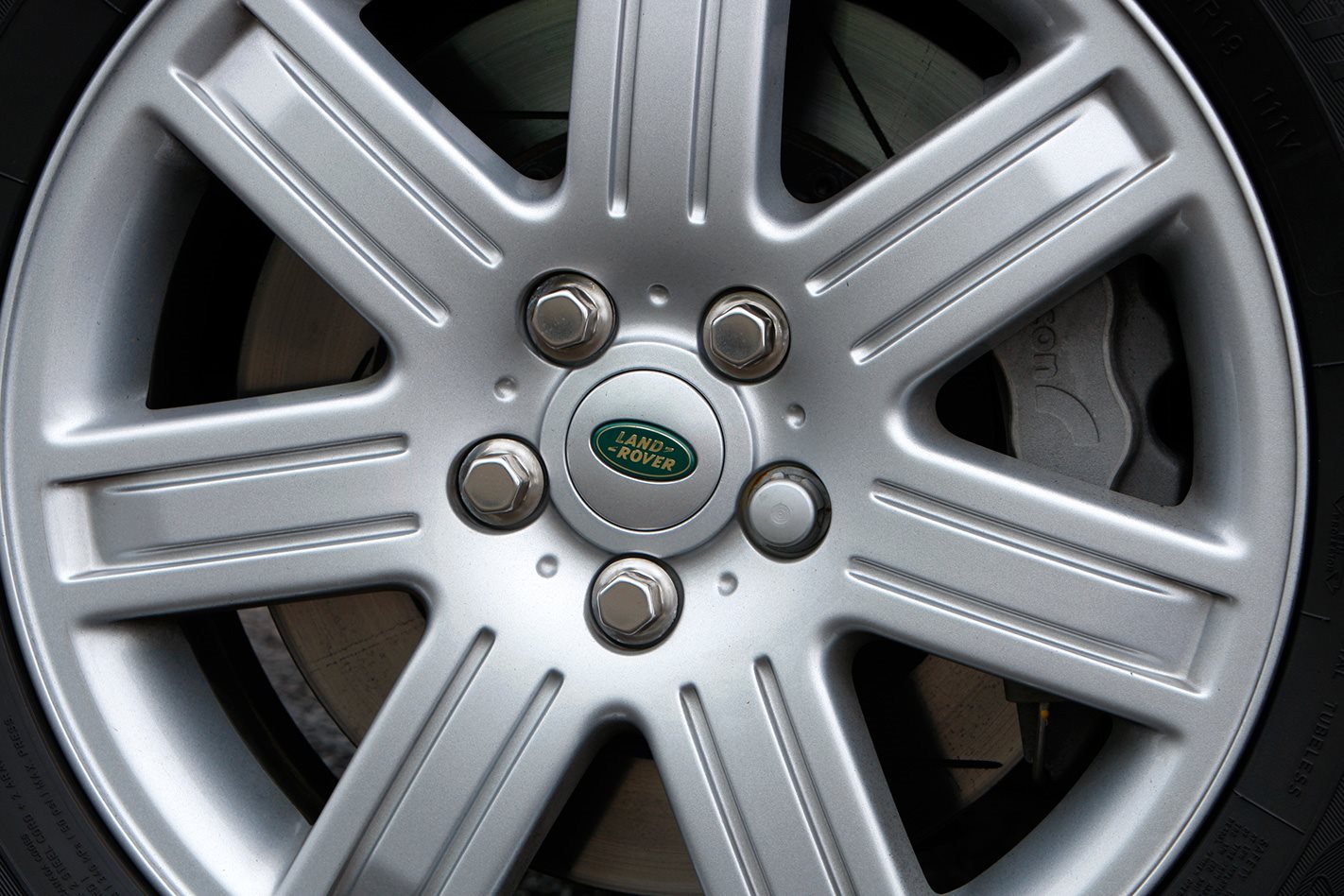 The Thai government has since bought [this number is classified] armoured Discovery 4s from Land Rover, and Halton taught the drivers how to use them, as he’s done with Sri Lankan government officials, as well as dignitaries, security personnel, police officers, military men and women, millionaires and religious leaders from around the world.

But, buying an armoured Land Rover isn’t as easy as you might think. For a start, you have to apply to buy one, and not just to Land Rover, but, if you’re buying in the UK, to the British Home Office. Plenty of punters, says Halton, have been turned down “for one reason or another”.

Once the vetting process has finished, Land Rover appoints a dedicated security consultant to work with the customer to ensure the vehicle is built to meet their requirements. All vehicles are sold with a warranty, and driver training as part of the package. Added extras include regular visits to a technician to ensure the vehicle is in tip-top condition. (In case you’re wondering – no armoured Rangie, or Disco, had yet been sold in Australia at time of writing.) 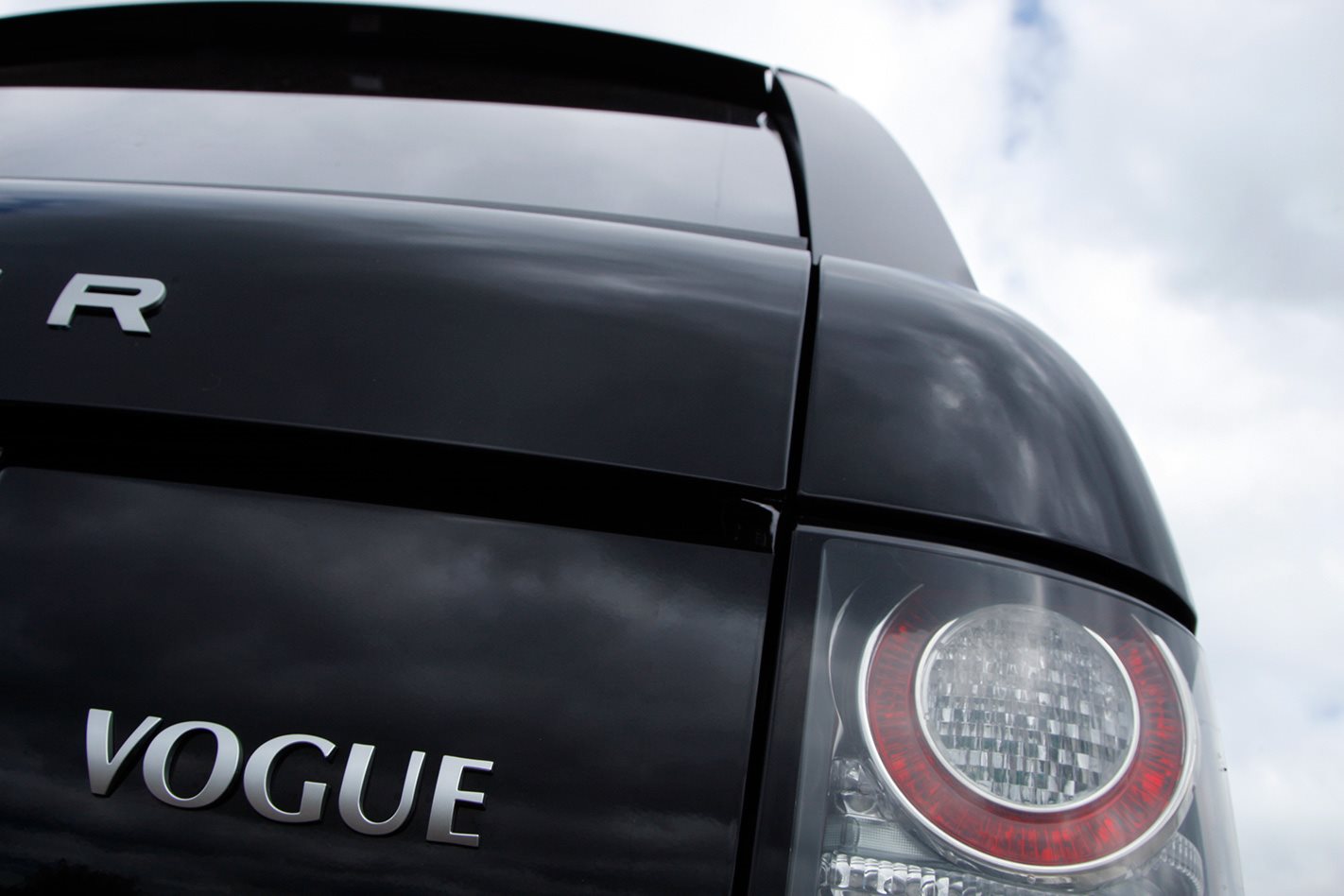 An hour or so later, and with my head filled with tales of assassination attempts and kidnappings – “in 2005, there were 442 kidnappings in London alone”, Halton says – and my notepad full of situational awareness, route selection and risk-assessment techniques, I am led out to the armoured Range Rover. Playtime is about to begin.

Well, at least it will as soon as I can get the door open. So heavily armoured is this thing that it takes all of the strength I have just to pull open the doors. Once inside, and with my breath back, I kick over the armoured Range Rover. Three times.

See, with almost two tonnes of armour around the body you can’t hear a thing from inside the cabin. Indeed, you have to use an intercom system, hidden in the cup holders, to talk and listen to people outside. 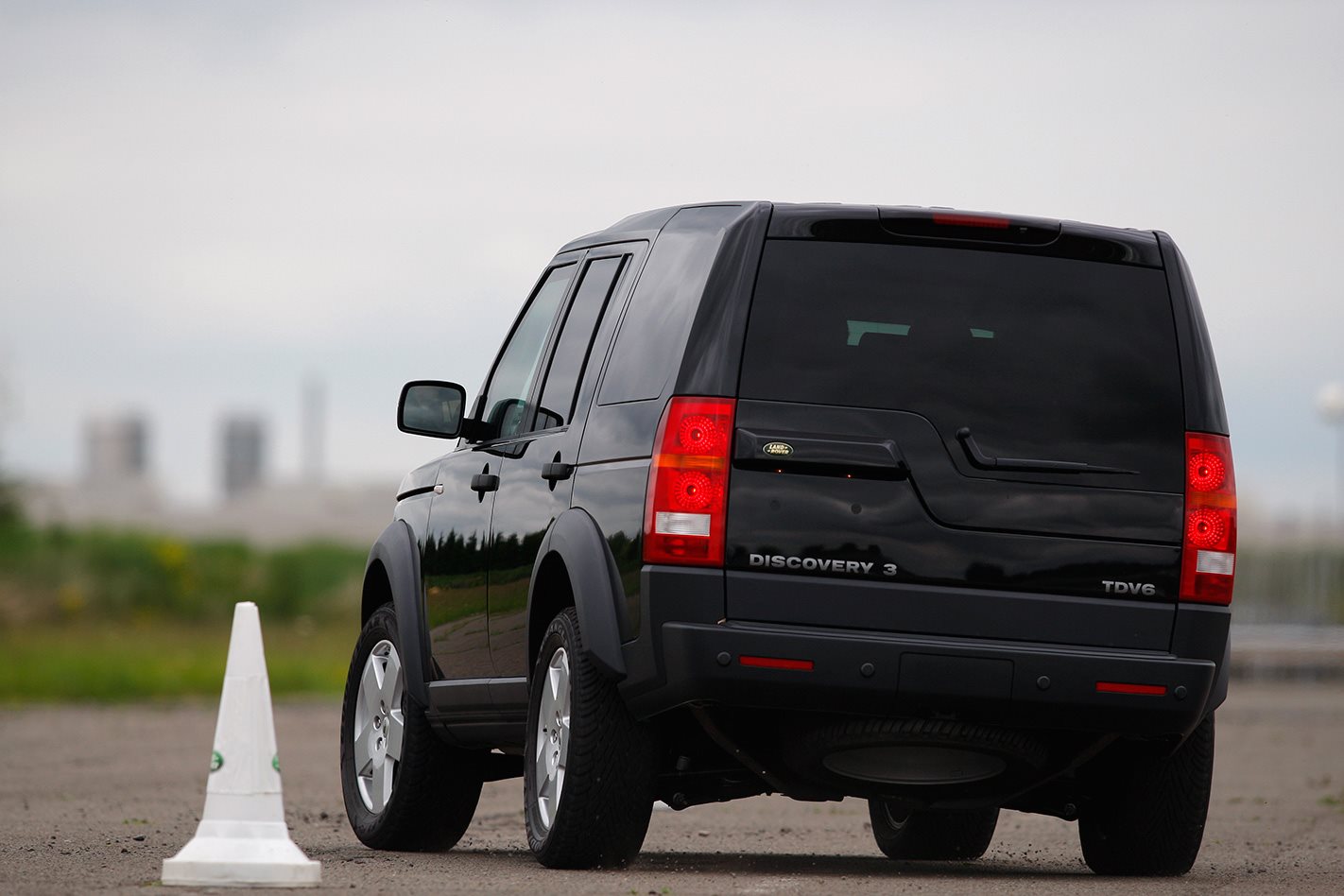 On the move, the armoured Range Rover rides and handles like a regular Range Rover. And that’s all down to its 5.0-litre V8 thumping out 276kW and 510Nm, and a Prodrive-tweaked chassis, air suspension, braking system and heavy-duty wheels. So, because it still behaves like a proper Rangie, you can clamber over gutters, down steps, or even push through walls if need be. Not that we got to do any of that.

“The Range Rover’s armour and all-road ability can mean the difference between life and death; but all it does is buy you a few vital seconds,” Halton says. 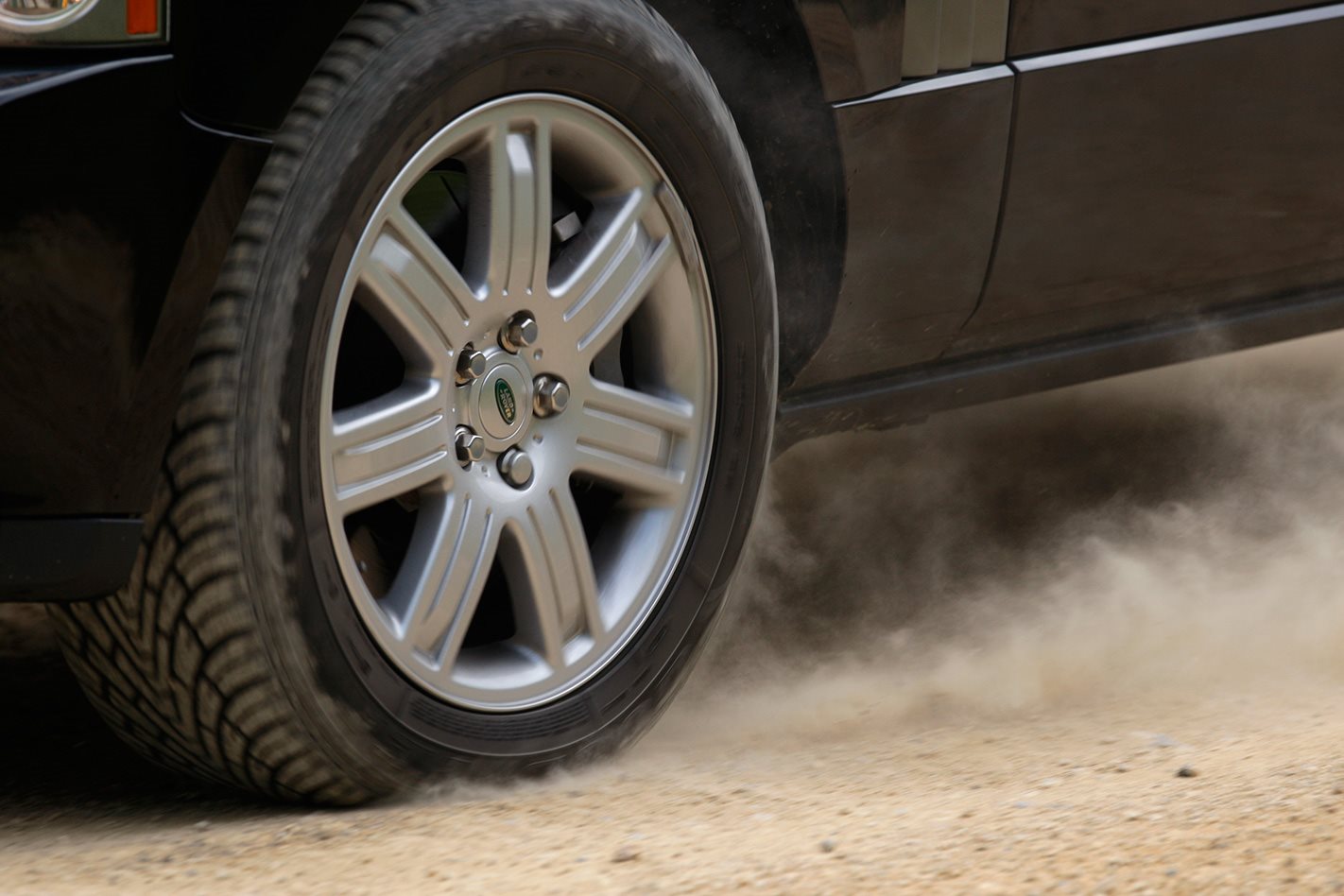 And that’s why, right now, I’m driving a figure-of-eight around a very large, and very empty car park.

“The key is to be firm but smooth, it’s when you panic and yank at the wheel with too much speed that you can tip it over and you don’t want that when you’re being shot at.”

But the best technique for escaping an ambush, and one of the most difficult to master, Halton says, is the high-speed reverse. Most difficult because you have to master three different ways of doing it: using the wing mirrors, using the rear-vision mirror, or looking over your shoulder. And all the while, bullets might be slapping into your vehicle. 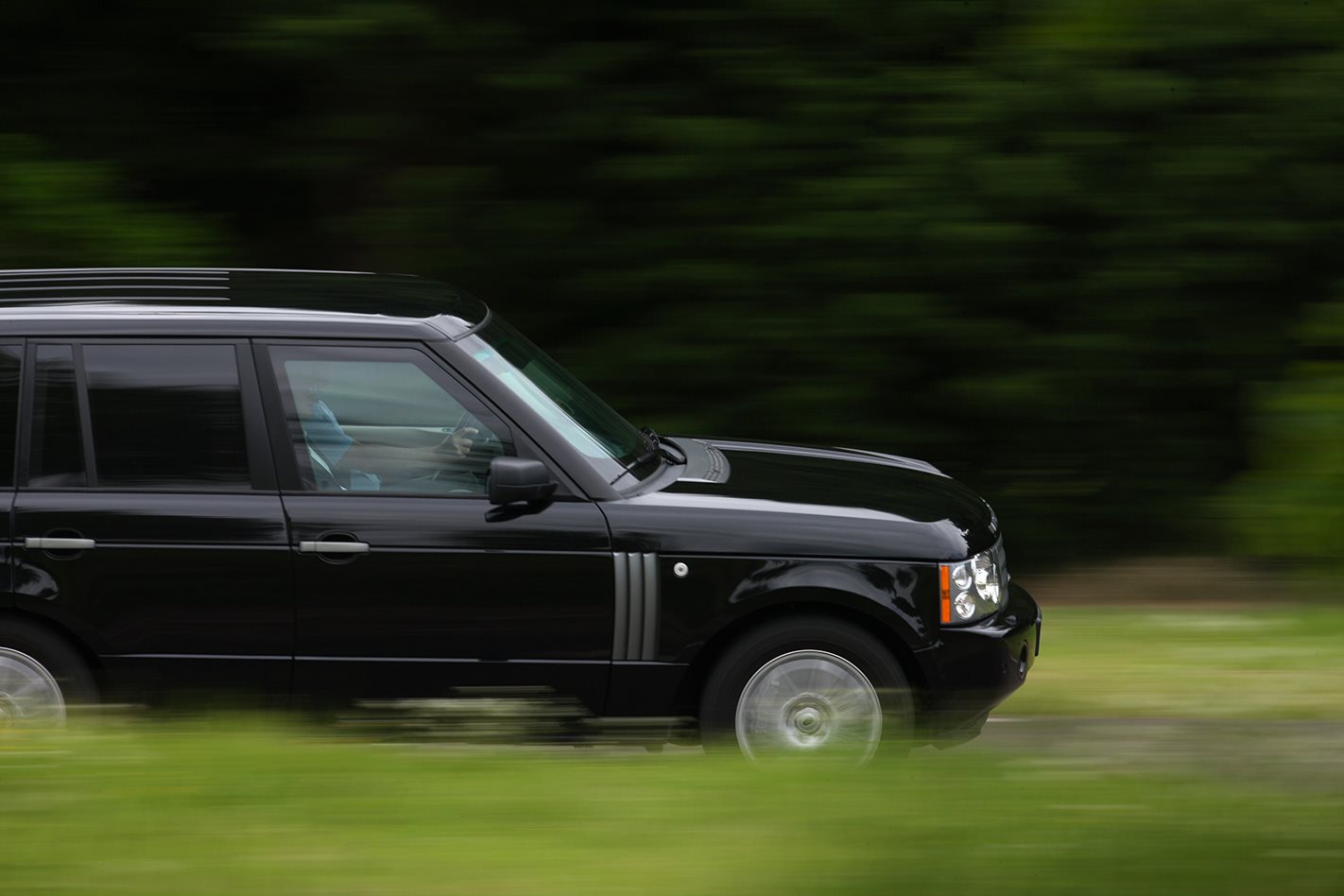 Using the rear-vision mirror I end up way off-course, running over the witches hats simulating a line of parked cars against the gutter. Game Over. Reset. Start again.

Using the wing mirrors I stay straight, but I’m slow, too slow, according to Halton. But looking back over my shoulder and locking my hand onto the top of the wheel, I manage to stay straight, even with the throttle mashed into the deep-pile carpet.

From there, Halton runs me through a brake-and-steer exercise designed to simulate avoiding an obstacle or even a gunman who has jumped out from behind a parked car. It’s simple enough to do, but it’s terrifying, because if you brake too late with too much speed on board you could understeer into a parked car, or building, or… and end up a sitting duck. Worse still, you could turn too hard, be too soft on the brakes and roll the car. 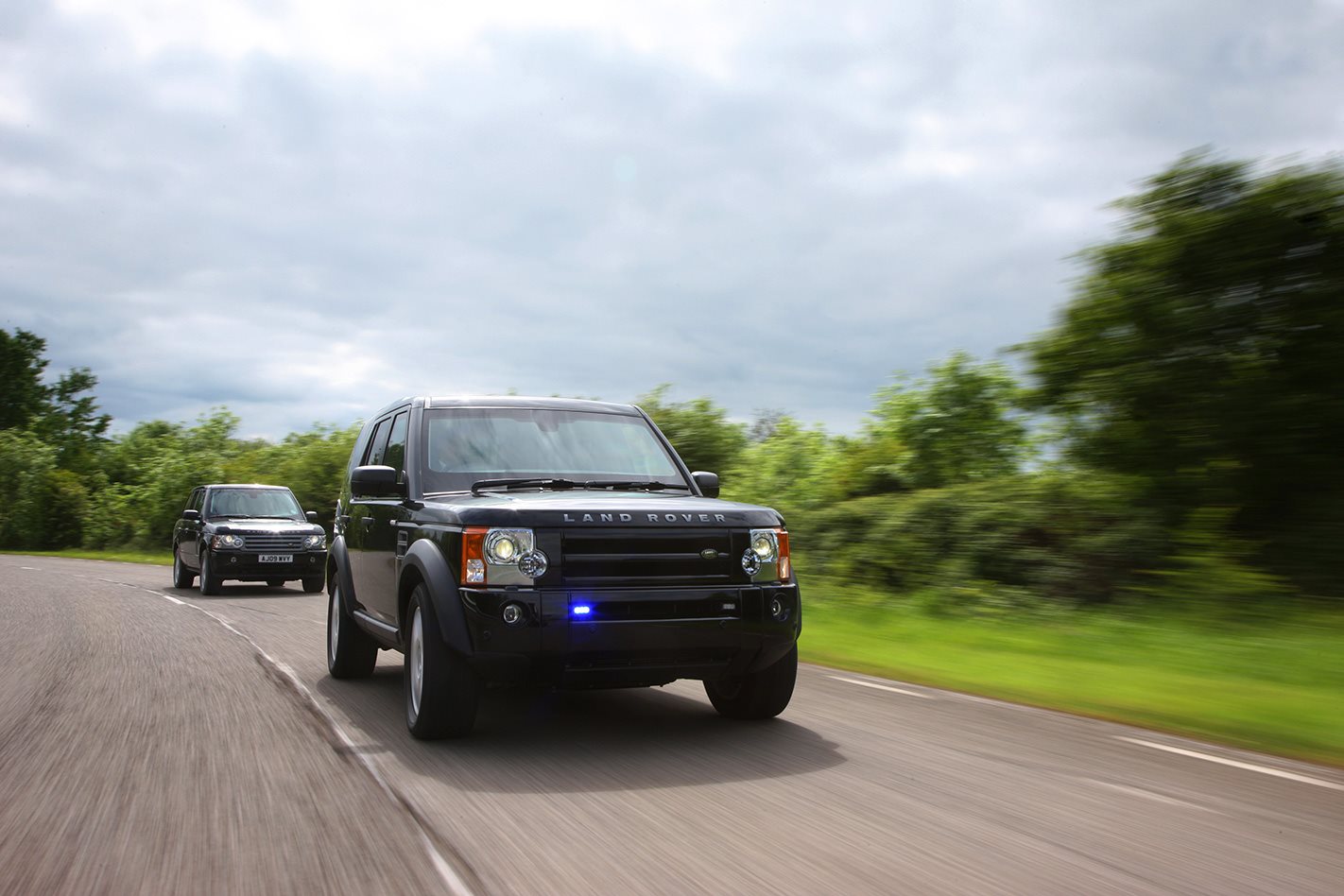 With this two-and-a-bit-million-dollars-worth of bunker scheduled to be sent to the detailers in the next hour, before being delivered to its new owner tomorrow, there’s just enough time for one more exercise.

And that is the high-speed brake test, which would theoretically then lead into the high-speed reverse. So I pin the throttle to the boards, the big girl picks up her skirt and hammers to 100km/h; I immediately get on the brakes with both feet.

The armoured Range Rover’s run-flat EMT tyres grip into the road and the Rangie screeches to a halt. I slam it into reverse. Gunmen avoided. VIP safe. Phew. And there, sadly, endeth the lesson. 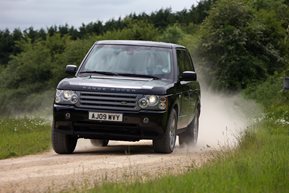