Hyundai’s attempt to crack into the premium market via the Genesis brand it established in 2015. The Genesis G70 is a midsize rear-drive sedan offered with either a 2.0-litre turbo four or 3.3-litre twin-turbo V6. The car’s international media launch was a chance to drive the G70 on roads out of Korea’s capital and at an excellent racetrack, however only the top-spec V6 car was available, not the turbo four, which is expected to take around 60 percent of the G70’s local sales.

The cars we drove were not tuned to the final specification of those we’ll get in Australia, so it’s difficult to make a definitive call. But if local suspension work improves body control and the retuned steering delivers, then the G70’s blend of premium feel and refined road manners – plus keen pricing, high equipment levels and five-year warranty – will all make it a model to be taken seriously in this segment. TO SAVE you the trouble, your diligent research team at Wheels (okay, me) has looked up the word ‘genesis’. Turns out it’s not merely the name of the band that Phil Collins left to allow him to deliver ‘Sussudio’ and other gems. No, it comes from the Greek for ‘beginning’ and suggests ‘the origin of something important’, which is perfectly appropriate for its deployment by Hyundai for the Korean manufacturer’s premium brand. But equally, in Hyundai’s application, the word Genesis could be defined as ‘mild confusion’.

In 2014, you may recall, Hyundai Australia launched a large luxury sedan pitched into the zone dominated by the Mercedes-Benz E Class and BMW’s 5 Series. Hyundai saw an opportunity to move up the food chain, where profits and prestige beckoned. So let’s accept that applying the Genesis name to that model – which ended up largely being bought by hire car companies, and is now known as the G80 – was, in hindsight, not the ideal strategy. 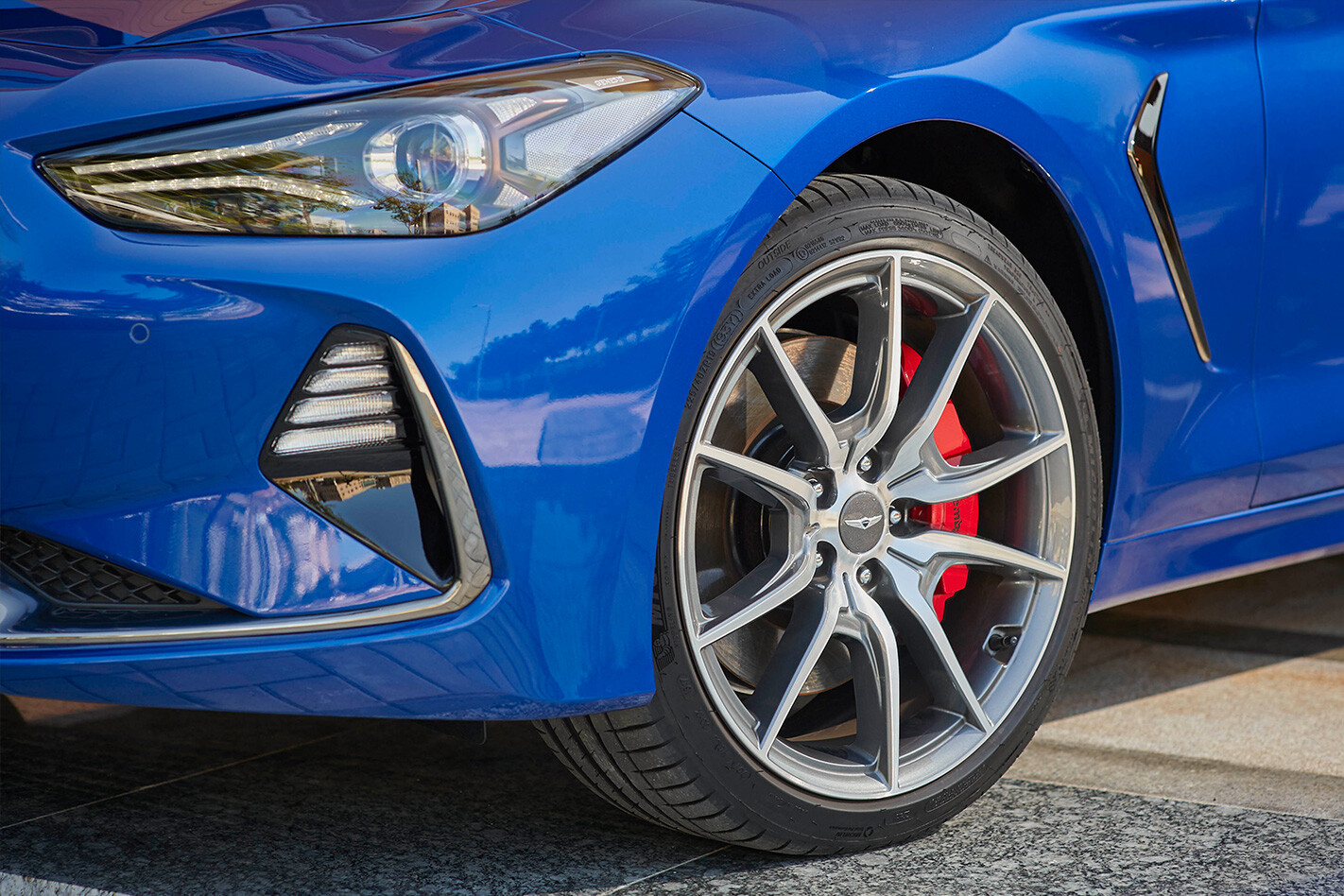 Genesis could have been the beginning of the end.

But we’ve written previously about the tenacity and ambition of the Koreans running its automotive industry. They possess fearlessness as well as a “recruit the best” hiring policy. So here’s what Korea’s largest car company is asking you to do: forget what you know about the Hyundai Genesis, and open your mind to Genesis the brand. Just as Lexus is to Toyota, and as Infiniti is to Nissan, now Genesis is to Hyundai. 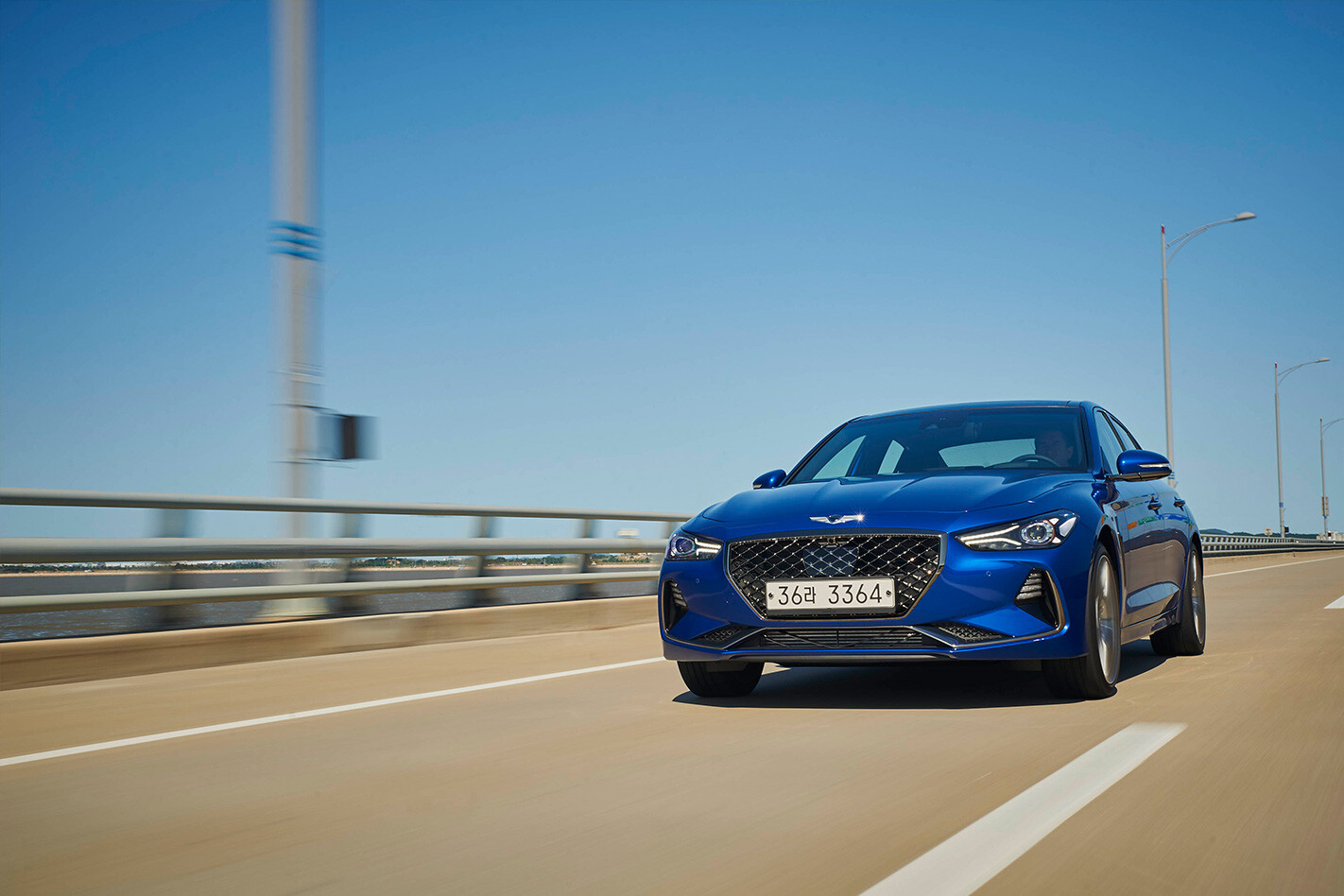 The brand was launched in North America, China, the Middle East and South Korea in 2015 and has surged strongly. This car, the midsize G70, will spearhead the launch of Genesis in Australia in the first quarter of 2018, offered in three trim levels for the 190kW/353Nm turbo-petrol four-cylinder, and three trim levels for the 3.3-litre twin-turbo V6. All drive the rear-wheels only via an eight-speed automatic.

On the subject of the exterior styling, I’d agree with the official Genesis line that it has proportion and athleticism, but it’s not what you’d call an expression of minimalism. There’s a lot going on at the front, while the rear lacks the crisp elegance of the revised G80 sedan we’ll see in Australia around the same time as the G70. But … ignore the moronic trolls online and form your own opinion once you see it in the metal. It’s a bit derivative from some angles, but in no way dumpy of ungainly.

As for a driving assessment, regulars here will be familiar with the old line “we’ll reserve judgment until we can drive the car on Australian roads” but in this instance, it’s more a case of reserving judgment until we drive the actual car that will be sold in Australia. All we can provide here is an impression of the G70 in its broader role, because the spec of the cars we drove were not representative of what we’ll get in Australia, and we weren’t offered a drive of the 2.0-litre turbo four that will take at least 60 percent of G70 volume in Australia. 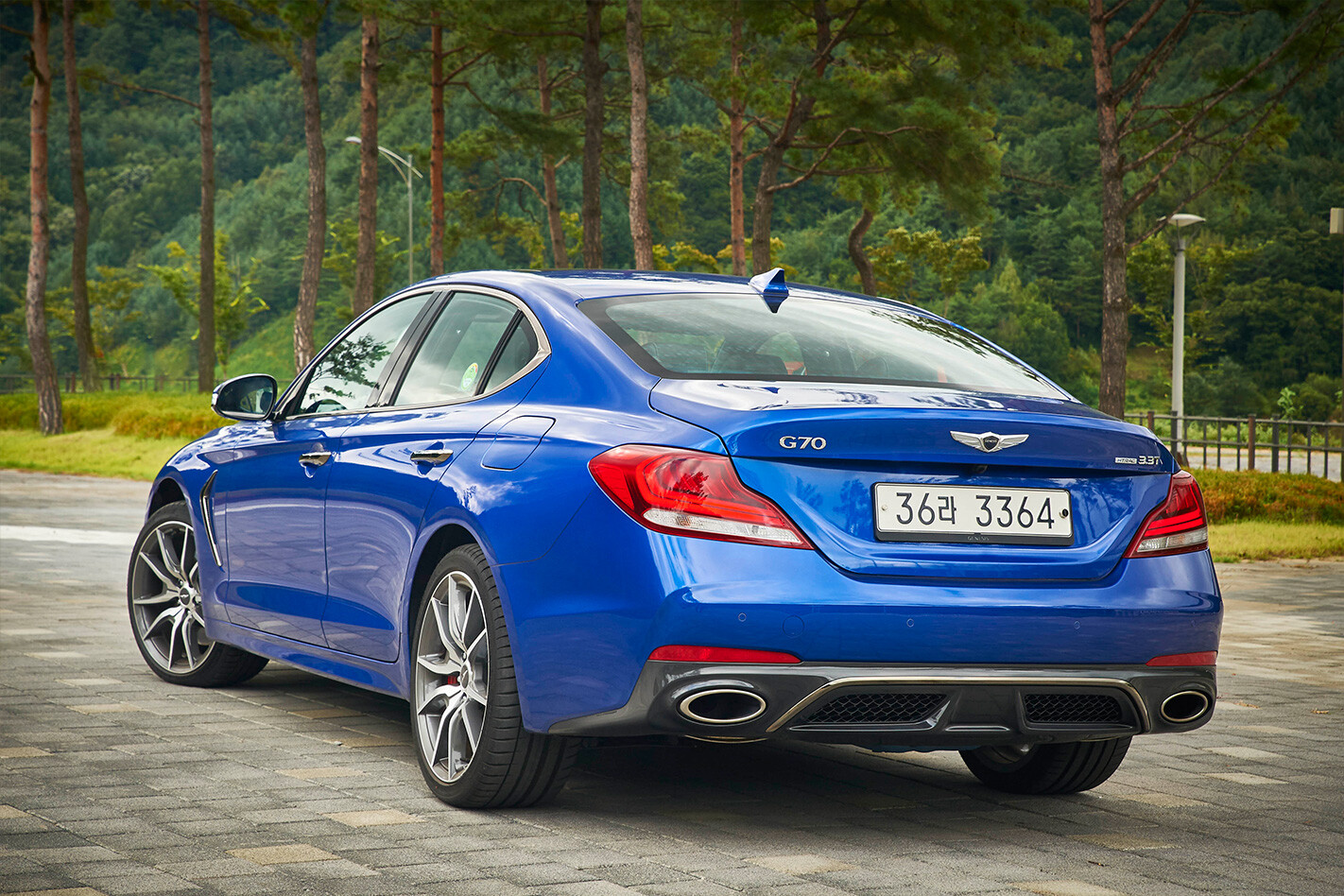 The cars we did punt, first on road and then on track, were weighed down by all- wheel drive, adding around 70kg, and running too-soft dampers tuned for the Korean market. Our car also came with the non-delete fitment of a well-fed photographer in the back seat and his gear in the boot, tipping in about another 130kg. So it’s no surprise the G70 – already tubby for this class at around 1750kg – felt weighty and a bit wallow-prone when we had a brief chance to push it on some twisty sections. The damper tune felt unsuited to Aussie tastes and conditions, so it’s a good thing our cars will come with more disciplined body control. We’re assured that ride won’t be unduly compromised in Comfort mode, and Sport will still be useable on our roads. We’ll see.

But let’s get back to the positives. The interiors of the cars we sampled – the top-spec sport and luxury lines (with these model tiers yet to be decided by HMCA) exuded a suitably premium feel in terms of materials and especially in equipment levels. Yes, we are now in an era where a Mazda CX-9’s interior feels premium, so there’s not the gulf there once was, and the G70’s interior won’t be the cause for anyone at Audi breaking out in cold sweats. But the layout is utterly intuitive (if not really adventurous) and the leather, aluminium and general feel-good factor are persuasive. The driving position has plenty of scope to accommodate a variety of body shapes, and the seats themselves are top notch, with loads of adjustment, and power extension of the under thigh section that brings a big thumbs up. The G70 rebukes the trend to move all minor controls to the infotainment screen, another move which will no doubt find plenty of supporters. The touch screen is tablet style, rather than a full integration, and the graphics are a bit on the basic side, but functionality is fine.

At 4685mm long, 1850mm wide and 1400mm high, the G70 is 157mm shorter, 18mm narrower and sits on a 70mm shorter wheelbase than the Kia Stinger, with which it shares much of its platform and drivetrain fundamentals. That reduction in size is most apparent in terms of rear-seat accommodation. It’s on the tight side for anyone approaching six foot, and there’s barely any footroom if the front occupants have their seats set at the lowest level. 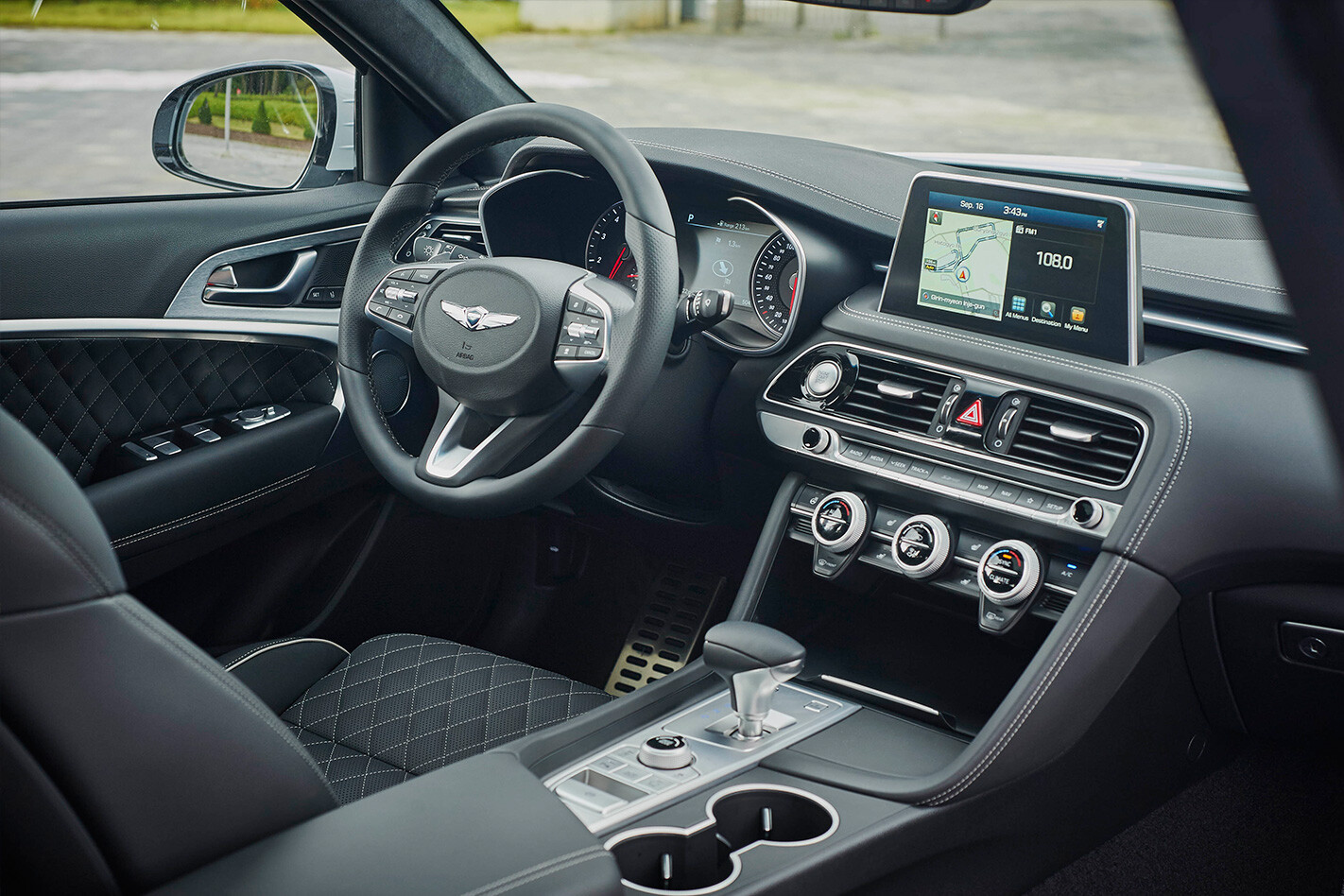 The engine, which is virtually inaudible at idle, has a note that’s partly synthesised via a digital sound-processing system; it’s growly agreeable without ever being really thrilling. The upshifts are at a fairly conservative 6100rpm, and with no full manual mode for the transmission – only paddle shifts to override the auto – you’ll never meet the rev limiter, let alone nuzzle up against it to avoid an upshift as you enter a braking area. The transmission calibration is an issue on a circuit and in hard driving; obstinate in its refusal to give a second- or third-gear downshift when road speed and revs have already proved capable of it in the upshifting phase. As for performance, the claim for the V6 is 0-100km/h in 4.7sec; expect the reality to be closer to 5.0sec.

At the brilliantly named Inje Speedium circuit, where Albert Biermann was quick to point out “it’s not a performance car, it’s a luxury car with sporting ability,” the AWD G70 still acquitted itself pretty well at effort levels of around eight tenths. There was more roll than you may expect with the adaptive dampers in Sport mode, but Aussie cars will surely be more resilient. What is encouraging is that the ESC calibration is nicely judged, giving enough latitude to allow the rump to be usefully engaged in line tightening.

The rear-drive car, much closer in spec to what we will see in Australia, was a way more satisfying thing to drive hard, even if we were only permitted a single lap in it.  The slight nose heaviness of the AWD car was removed, thanks to the deletion of the power take-off unit and front drive shafts, and instantly there was much crisper, more incisive turn-in, followed by much better mid-corner balance. The chassis’ obedience to throttle lifts or applications was in a different league to the AWD car. The grip from the stickier Michelin Pilot Sport 4s, which we will also get, was usefully higher than that of the less performance-focussed Michelins fitted to the AWD cars, and the faster corner speeds these tyres allowed only elevated the sense adjustability of the rear-driver. Power-down ability, thanks to a mechanical limited-slip diff, is also exceptional.

But it’s premature to try and forecast if the G70 can really rival the best in this class for dynamics. First impressions suggest its weight may hold it back, but it won’t be far short. Fact is Hyundai knows that being a dynamic benchmark isn’t essential to success this segment. A nice riding, good driving package will be enough, given that overall refinement is excellent. And the Australian-spec G70s, we predict, will deliver all this and more. The G70’s powers of persuasion will come from other angles of attack; like standard equipment for which the Euros gouge you via expensive option bundles, a longer warranty, the promise much easier ownership experience, with courtesy car drop off and collection at service time. 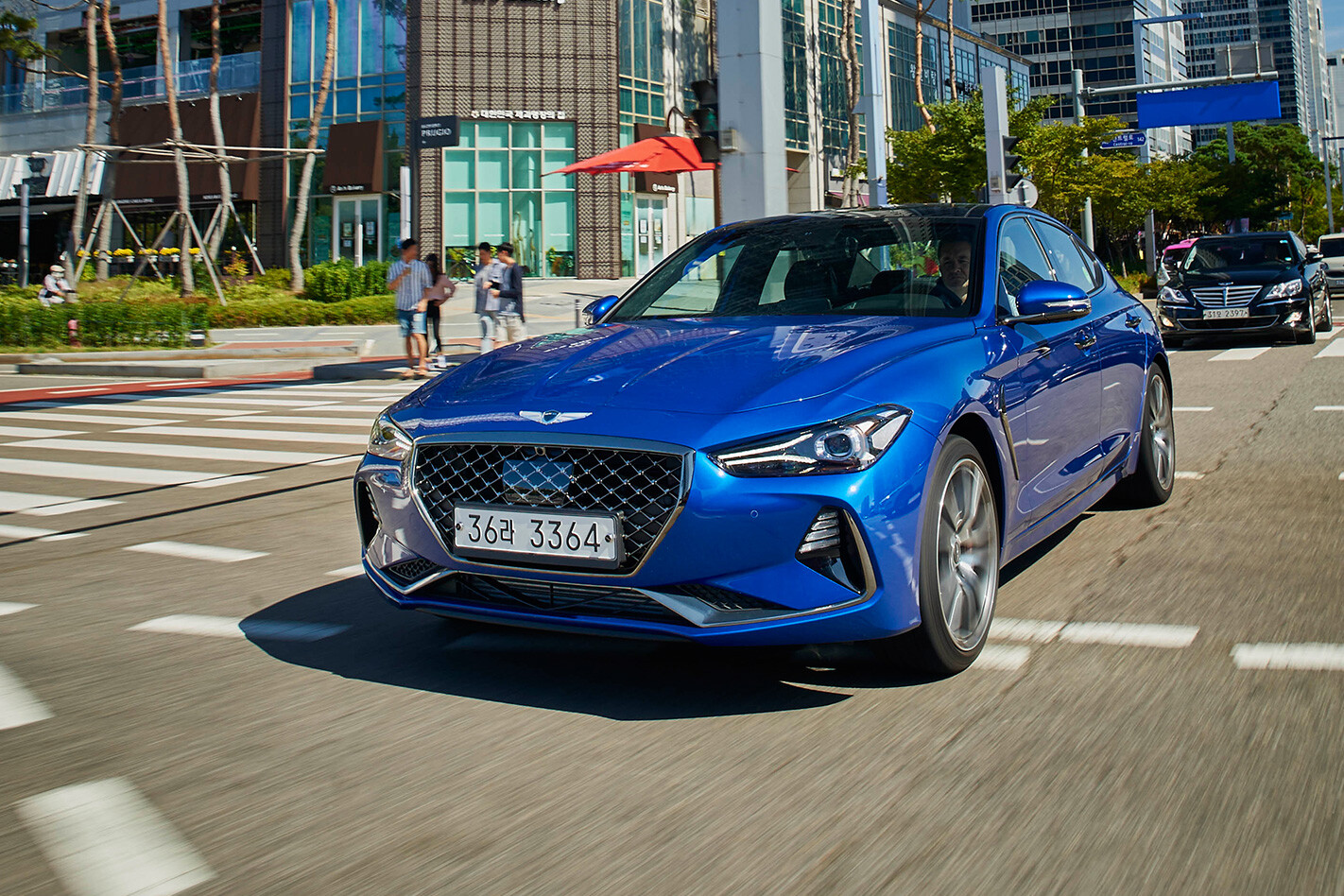 In short, Genesis doesn’t just herald a new beginning for Hyundai, it has the potential to usher in a new era of discomfort for the premium European brands. The game hasn’t changed, but a serious new player just joined the table.