THE eyes are stinging. The ears are ringing. The wig is about to part from the scalp. But, hey, Lamborghini’s demographic says this is a man’s world, so the top stays down while the new Huracan Spyder rips into the speedo numbers that start with a ‘two’ – at the same time freezing an icy smile on my face.

It’s said there’s no real pleasure without pain, and the Spyder bears testament to that. From the sonic assault of the engine and exhaust, to the take-no-prisoners tune of the suspension, to the nose that wants to grind itself off at the mere sight of a speed hump, this car plays hardball.

It also sits in a segment occupied by some highly talented players, so is it worthy of the $470,800 asking price when it arrives in Oz? Well, first things first, our first encounter with Lambo’s latest roofless creation generated mixed feelings. We love stylist Filippo Perini’s razor-sharp design, the street-theatre presence, the atmo punch and the sheer sonic tsunami of the 449kW 5.2-litre V10. 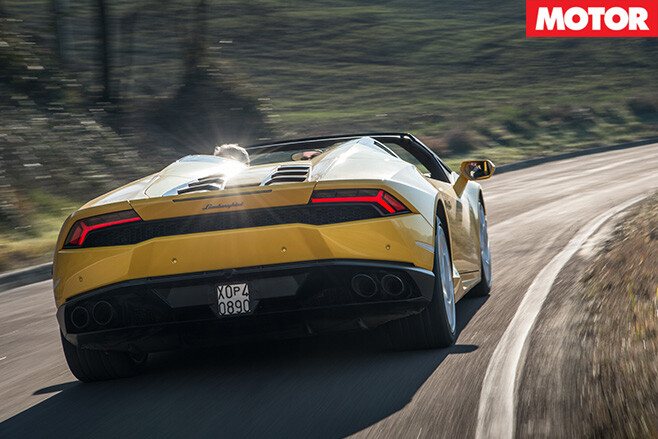 But we’re less enamoured with the bonsai luggage receptacle and the theatrical overkill of the cockpit. Then there’s the limited roof-up headroom and poor visibility, and the fact the folding roof has the sound deadening qualities of a kitchen towel. No, this car could never be considered a logical buy, let alone a daily driver.

But it is a Lamborghini, so its job description is to get under the skin. And it takes just a press of the roof button to start the process. Watch as the whole roof assembly retracts back in one yawning motion and changes the scenery in just 17 seconds.

Instantly the sonic assault gains new dimensions. The drivetrain now has to compete with the wind rush and the road noise of the fat 20-inch Pirellis. Shifting from Strada to Sport mode gives the engine back the aural upper hand. The induction note slurps hungrily and the exhaust note growls voraciously all the way to a shattering peak at the 9000rpm limiter. 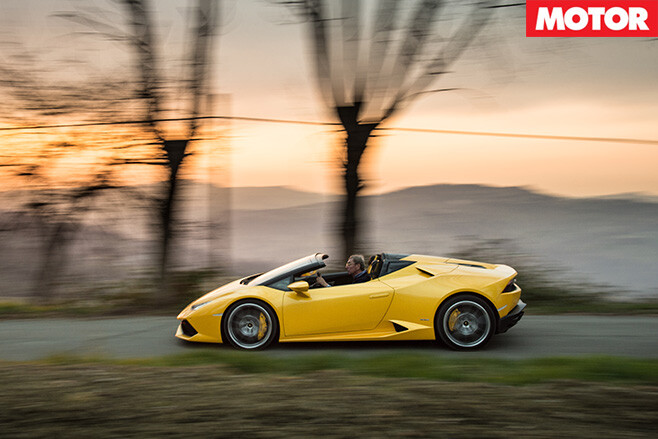 In Sport, the dual-clutch transmission delivers upshifts hard and fast, while the staccato downshifts never miss a beat. Bonus points for its extra-large shift paddles attached to steering column not the wheel, and for the foolproof reverse gear T-bar.

To really get stuck in, though, you’ll want to select Corsa. The dampers switch to their stiffest of three settings, every gear change slots home with a crisp thump, a sharp throttle lift is accompanied by thunder from the sexy rear end, and the ESC electronics are now attached to an extra-long leash.

The tail-happy Spyder prefers accurate carving to smoky slides. Its bellowing V10 and the wind-in-the-hair sensations are somehow just as important as grabbing armfuls of opposite lock and coating the wheels in brake dust. Yet when the opportunity presents itself, the Spyder will bolt to 100km/h in 3.4sec and won’t let up until (a highly theoretical) 325km/h. 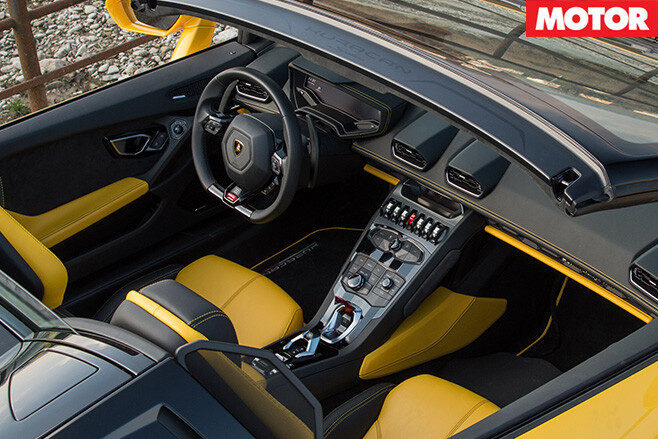 The video arcade instruments won’t be to everyone’s taste, nor the dashboard layout, which combines chunky plastic with sat-nav graphics borrowed from Audi. The scattered array of secondary buttons, switches and levers is confusing, however the driving position and main controls are, as in the coupe, spot-on.

Drawbacks? The different settings bundled in the Strada, Sport and Corsa modes can’t be reconfigured to individual preference. Then there’s the outmoded infotainment system, the absence of a head-up display and the fact the must-have hydraulic front-axle lift commands a premium.

No, the Spyder is not about efficiency, sustainability, practicality, or sensibility. It couldn’t care less about lane discipline, cross-traffic monitoring, or self parking. Like every Lambo, the new Spyder is a highly emotional creation which assaults all of your senses. This engine responds to throttle orders like a whip being cracked, it sounds like a spine-tingling open-air concert staged exclusively for two, and its manic eagerness for revs borders on unhinged. 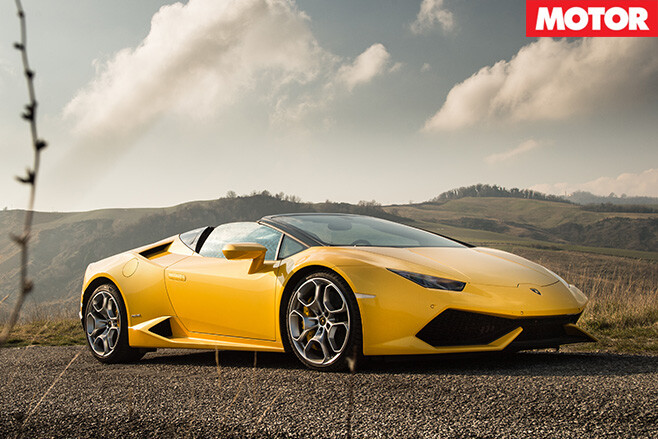 The Spyder is a clear case of character eclipsing perfection. In a purely objective head-to-head comparison, the Lamborghini will always lose out to the Ferrari 488, and would struggle against a 911 Turbo S Cabriolet or an Audi R8. But emotional connection counts for plenty in this segment, and that’s exactly what makes this old-school, egocentric and colourful nonconformist from Sant’Agata so special and desirable.