It seems power has become the de facto aspect that defines a hypercar these days.

Sitting at the highest echelon of the performance car sector one would assume power has to be the ultimate bragging point, but not for a little Italian manufacturer called Pagani. With the new Bugatti Chrion and Koenigsegg Regera both boasting around 1100kW – the latter resorting to a hybrid system to boost the transmission-less driveline – the 588kW Pagani claims for the Huayra BC almost seems a little underwhelming. But there’s so much more to this focused, track-inspired version of the Huayra.

Those initials first. BC stands for Benny Caiola, Horacio Pagani’s first ever customer. Benny was a man who believed in Horacio and his cars, and over the years he turned out to be more of a mentor than just a customer. Benny, who was regarded as one of the biggest Ferrari collectors in the world before his passing in 2010, always encouraged Horacio to create a more track-focused version of his then-new baby, the Huayra. Fast forward a few years and we are in beautiful Sicily, Italy, to get a taste of a close-to-production prototype. 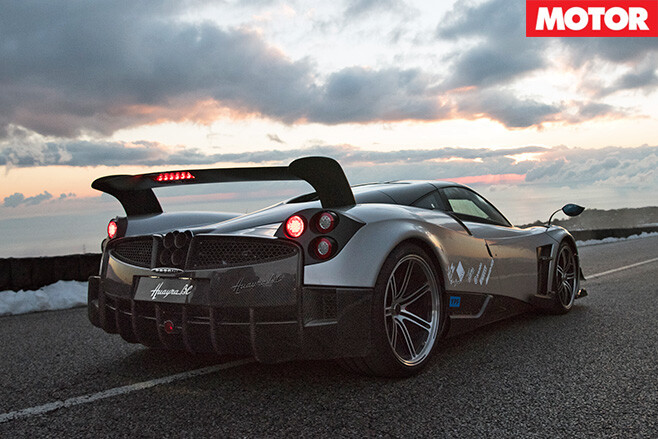 When it comes to numbers, the Huayra BC's key one is 1218kg; this is what it weighs, which is almost 100kg less than the regular Huayra. The weight loss is achieved solely thanks to Pagani’s maniacal research and development into carbon composite technology. The carbotanium monocoque tub remains unchanged, as that’s a requirement for homologation in most markets, but every single body panel – save for the tiny roof piece – has been redesigned and created in lighter carbonfibre.

Aside from the obvious aerodynamic additions, such as the aggressive front splitter, the vented front arches and the rear diffuser, the Huayra’s profile has been given more pronounced features including a crisper shoulder line, widened and gently blistered fenders and, of course, a fixed rear wing.

Pagani called in Dallara to design and refine the aero, using countless hours of Computational Fluid Dynamics (CFD) testing to make sure the Huayra sticks to the ground. And, for the occasional excursion to the track, the rake on the rear spoiler can be increased to add downforce. The cockpit, too, has seen some evident changes, making it obvious the focus is on driving. There are lightweight bucket seats with four-point harnesses, a fire extinguisher, and the billet aluminium that makes up the various sections of the dash and cabin are all anodised in black. The satin finish on the exposed carbon and the plush suede covering everything else combines to give a nicely toned-down and performance-oriented feel.

However, creature comforts aren’t sacrificed. Climate control is still present, and the BC is equipped with the latest version of Pagani’s infotainment system, which now boasts Apple CarPlay. Keyless entry will also be offered on the BC.

The aforementioned 588kW are generated via AMG’s thundering 6.0-litre, twin-turbo V12 engine. The V12 is now running the latest Bosch engine management system, a clever, more responsive mapping for the throttles and a tad more boost. It only revs to 6500rpm, because it doesn’t need to go over that; power comes in at just under redline with a towering 1100Nm being developed at 4000rpm. 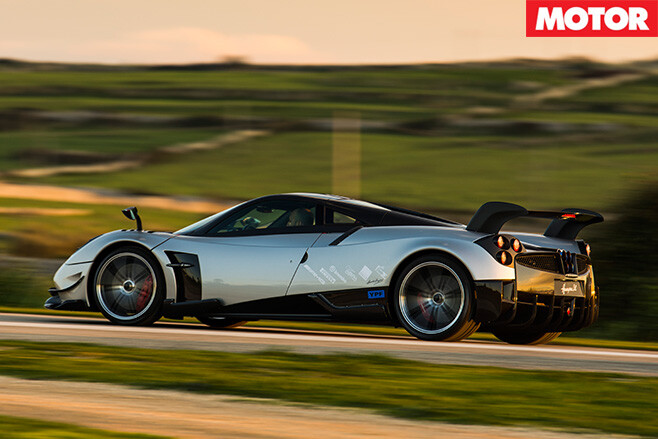 But words can’t possibly describe the full nature of this engine. It’s smooth and effortless, but at the same time brutal in its delivery. Even at 1000rpm in seventh gear it starts packing on speed at an unrelenting rate, but its refinement is what characterises it the most.

It’s as if it combines the progressive, linear and responsive nature of a naturally-aspirated powerplant with the explosive delivery of a forced-induction engine. And, unlike a lot of manufacturers that try to almost hide the fact that turbos are employed, Pagani celebrates it by amplifying all the wooshing sounds coming from the BorgWarner turbos.

It produces a distinct jet-fighter like quality that combines with the underlying low-frequency thunder coming from the engine. It’s all topped off with the crackles and pops the BC’s special lightweight (2.9kg!) titanium exhaust generates every time you back off the throttle. Gearbox shattering performance then, and that’s why the seven-speed, single-clutch Xtrac automated sequential got a complete redesign, too. There’s an uprated clutch, a faster actuating system that cuts shift times in half to 75 milliseconds, and stronger carbonfibre synchros. This sends drive to an all-new electronic differential and then on to Le Mans racecar-derived tripod axles. It’s all electronically controlled via the various drive modes you can select directly on the steering wheel. Impressive stuff!

The fine tuning and perfecting of every component is taken right across the board to the suspension, which now sports 25 per cent lighter and redesigned arms made from aerospace-grade HiForg (with more aggressive geometry), and new Öhlins active dampers.

Next-generation Brembo monobloc brake calipers are as light as they can possibly get; every gram of aluminium alloy has been carved out around each of the six front and four rear pistons. These bite down hard on carbon ceramic discs that further cut the all-important unsprung mass. The wheels are also lighter, despite being bigger at each corner – 20-inch up front and 21-inch at the rear, wrapped in Pirelli’s P-Zero Corsa. Lucky owners will also be supplied with a track wheel/tyre set-up – slightly smaller in diameter at 19-inch front and 20-inch rear, but shod in Pirelli’s Trofeo rubber, which introduces a stickier compound and an aggressive tread pattern.

Best thing is, these tyres are street legal, so you can drive home from the track after a day of fun; although, we would assume anyone tracking a Huayra BC would probably show up to the track with a dedicated transporter and a team of mechanics.

But how does it drive? Our prototype test car is around 70 per cent according to its minders, but even in its current state it's seriously impressive. Horacio Pagani’s insistence on making cars that aren’t hard or intimidating to drive is what stands out almost immediately once you get comfortable. 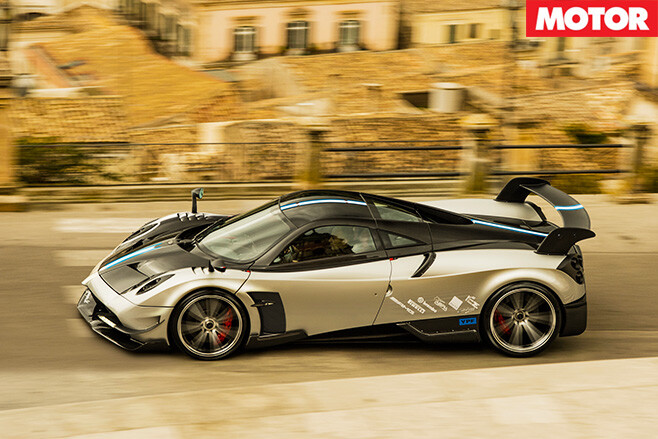 Your senses are tickled by some of the most communicative controls you’ll ever encounter on a street-registered car; there’s direct and precise steering that relays constant information from the front end, and there’s a rear end that comes alive under power in a very progressive and useable way.

This is partly due to the way the car’s weight is contained as close to the centre of balance as possible, something that dictated the use of a lighter, transversally mounted single-clutch transmission over a heavier and longitudinal twin-clutch unit.
There is no way a 588kW hypercar should be so chuckable, but that’s what the BC is: totally useable and infinitely satisfying.

The BC prototype hadn’t yet been fitted with the new-generation Öhlins dampers that will equip the 20 production cars. These will not only provide an even more comfortable and forgiving ride when cruising, but when pushing hard the active front set-up will counteract pitch and roll so as to keep the car flat under heavy braking and through corners – in an effort not to upset the fine weight distribution. 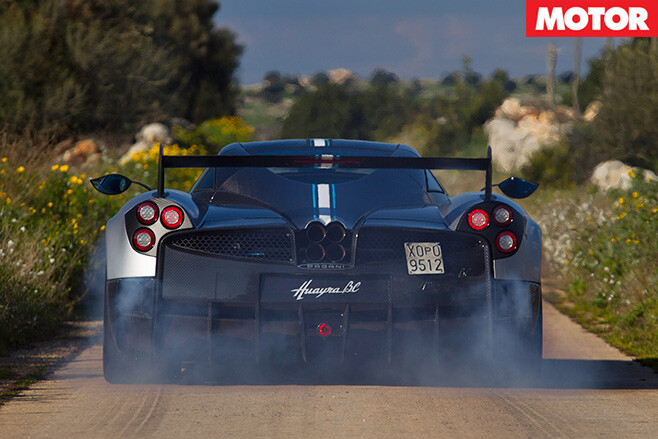 With so much torque available right across the low- to mid-range, savage acceleration is always available and intoxicatingly addictive. You seldom get close to the redline on regular roads, as the V12 just packs on speed so violently and effortlessly in every gear.

Despite the quicker shift times of the new gearbox there’s still a pause between shifts, but that’s a small price to pay for having such an exploitable ensemble beneath you. The brake pedal, too, is greatly progressive, with a tonne of feedback on what those massive Brembo calipers are up to.

The more you drive it the more you realise the choice to focus a great deal of the car’s development on shedding weight rather than going crazy with power – because honestly, 588kW is about as much power as anyone would ever need – was a very wise decision indeed. Add to that the obsessive way in which Pagani develops, sculpts and finishes every single component of the Huayra BC and you have what may well be very close to automotive perfection. And that sort of perfection comes at a pretty hefty price, starting at 2.35million (AU$3.5million) for each of the 20 cars being built. And, yes, they are all sold out.