POUNDING in to the first craggy gully along an undulating dirt road is enough to establish that Ford’s latest addition to its vast Ranger family has solid nous when the going gets tough.

Yep, I did say “latest addition.” Just when you thought there were enough Ford Rangers to wade through, along comes another – the FX4 Max.

Borrowing most of its mechanical kit and spec from the Ranger XLT, the new FX4 Max has wisps of Raptor DNA designed to step up the off-road cred and add some all-important visual muscle.

There are Raptor-esque touches. Black 17-inch wheels (they’re unique to FX4) and the F-O-R-D grille replacing the more formal blue oval one are two highlights. An extended black sports bar adds to that look, while unique side-steps with protruding hoops aim to make the rise into the cabin that tad easier. Wheel-arch flares are smaller than those on Raptor, as are the arches themselves; the Max’s body is shared with regular Rangers, so doesn’t have that full-blown, pumped-up stance. 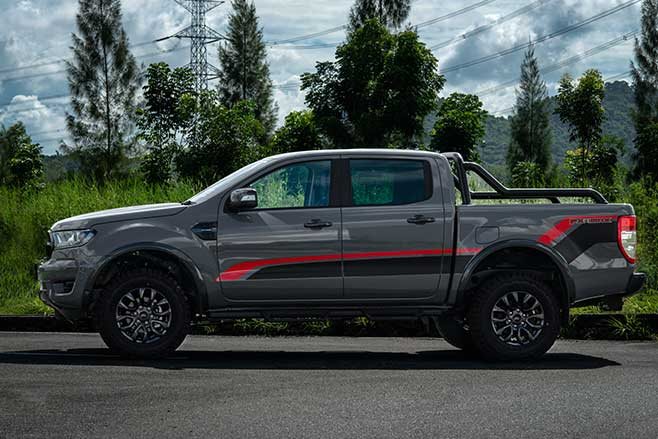 Optional stickers ($750) add to the grunty bling, although we’re not sure they’d be high on our shopping list. At least you can add adaptive cruise control for $800, something that can’t be achieved at any price in a Raptor.

Inside, the seats have FX4 Max embroidered along with something supposed to look like carbon fibre and slivers of leather.

Yet in an indication that cost containment was part of the goal – the FX4 Max is $65,940 plus on-roads – you’ll still be adjusting your seat manually.

But it’s underneath where things get interesting. 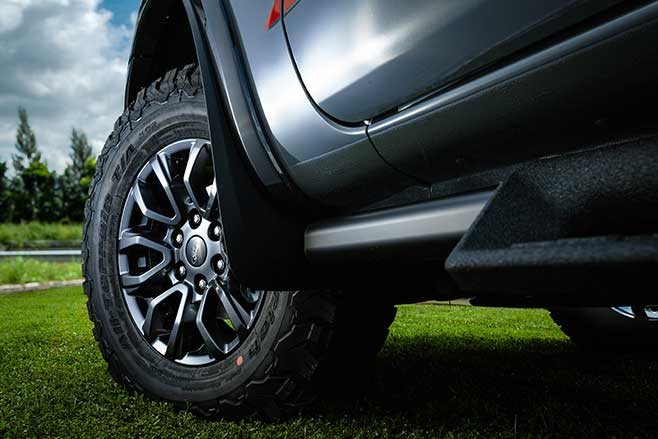 The Max brochure is quick to spruik the “advanced Fox shocks”, which creates that marketing link with the Raptor. However, whereas the Raptor gets 2.5-inch shocks, the Fox in the FX4 Max are 2.0 inches in diameter. And there’s none of the motorsport-inspired geometry that separates a Raptor from a mere Ranger. That said, there’s also plenty to get excited about: new bump stops, a 29mm front stabiliser bar and remote reservoirs on the rear which retains its leaf springs.

Springs have also been revised to match the new Fox components and account for the higher ride height. All up, there’s another 30mm to play with compared with a regular Ranger, about 20mm through the suspension and 10mm in the tyres. Which brings us to those bulging BF Goodrichs, each 20mm narrower than those on a Raptor. The 32-inch all-terrains ride on 17-inch rims and stick out further, widening the track by 26mm. 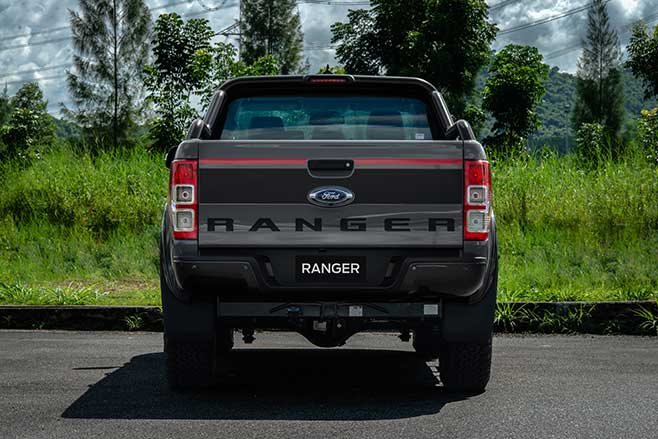 Our first contact with choppy gravel showed there are noticeable improvements over a garden variety Ranger, a mix of suspension and tyres better disposing of washouts and rocks poking their head above the shifting surface. No doubt the additional sidewall in the tyres is doing a lot of the early work.

Driven briskly over fire trails, there’s still the firmness of an unladen Ranger but it recovers from a bump more assertively. There’s more consistent control and with external canisters for the rear shocks we’d like to think the prospect of rolling over corrugations would be less punishing on the gear, especially if you’re approaching GVM.

The Max benefits are more obvious over, say, 50km/h. In that sense it’s like the Raptor, although the Max is skewed towards the XLT side of the ledger. Like the Raptor, the FX4 Max’s suspension tweaks are most pronounced over bumpier roads and with some pace on board. That said, the leaf-sprung rear-end isn’t completely quelled, occasionally skipping, especially after a big hit. Whereas the Raptor will hungrily attack almost any bump at any speed and somehow skillfully cushion 2.3 tonnes of flying Ford, the FX4 Max still calls for restraint.

Granted our drive was with the car unladen and we suspect the difference between suburban-spec Ranger and FX4 Max may be more pronounced with half-a-tonne on board. 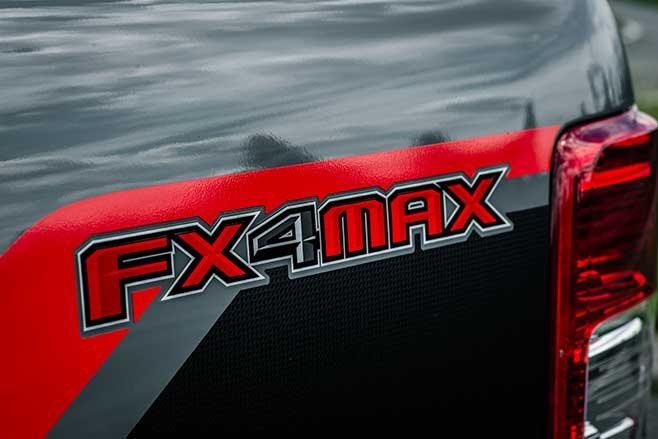 It’s the additional kilos where the FX4 Max makes up plenty of 4x4 points. Its 981kg payload (233kg up on Raptor) is ready for gadgets and gear – and you get the impression the suspension will happily welcome it. The 3.5-tonne tow capacity matches that of other Rangers.

There are also other teasers that make the Max a more proficient adventurer. Accessory switches on top of the dash have been plucked from the F-150 parts bin and make it cleaner to connect everything from additional lights to a winch. The 250amp alternator ensures the electrical system copes with extra accessories, although many will still splash out on a second battery for fridges and other things you want powered overnight.

On road the BF Goodrich K02s ram home the compromises. The taller sidewall takes the edge off steering accuracy, so additional input is required for the same result. There’s a little more hum from the tyres at 110km/h, particularly from the rear. And water on bitumen is not a good mix, the BFGs slide unnervingly. We’d be prepared to bet they’re better on gravel than wet bitumen, the chunky tread blocks beautifully clawing every grain of dirt for impressive control. There’s also a matching spare underneath, although the chances of getting a puncture are a lot less than they are with the highway rubber typically fitted to a Ranger. That’s the start of a solid off-road package with the FX4 Max.

The extra 30mm of clearance – 19mm at the rear diff – improves the approach and departure angles to 31 and 23 degrees, each 2 degrees up on a Ranger but still shy of a Raptor. And the BFGs do a better job of clutching at rocks and mud.

Ford claims the side-steps don’t impact overall ground clearance, but it doesn’t take a particularly challenging rock or log to realise they’ll limit how far you can go. At least they’re tough and should deal with the occasional scrape, although the steps that hang down can easily catch on things, so it pays to have a spotter ensuring some of that bling stays put.

Better still, remove the side-steps and bolt on proper rock rails. They’ll also be less likely to dig into your shins or calves on entry and exit. 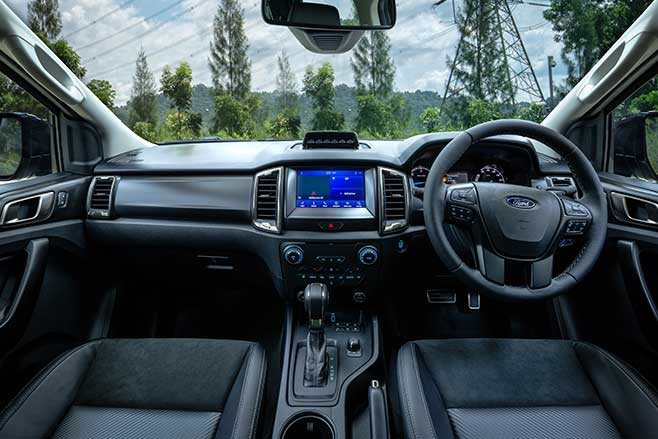 Like the Raptor, the FX4 Max comes exclusively with the 2.0-litre bi-turbo four-cylinder diesel that is a $1500 option on an XLT. Smoother and quieter than the venerable 3.2 five-pot, the 2.0 doesn’t have the initial throttle response but makes up for it with more pep across the rev range. Overtaking is easier, the additional Newton-metres better dealing with a weighted Ranger.

The 10-speed auto is ever eager to slot into a taller ratio, something more obvious when winding up a mountain pass or tackling winding trails. Without paddle shifters the only way to take control is with the fiddly toggle switch on the side of the gear selector.

So, yes, there are genuine changes and improvements over an XLT, although the Raptor is still leaps and bounds ahead (literally) for those wanting a seriously special truck. There’s still a place in the bush for something with wild Baja genes.

Instead, the FX4 Max compromises some of that never-slow-down Raptor mentality and deftly turns it towards the adventurous side of 4x4 touring. Having a proper payload and tow capacity is key to its appeal.

The FX4 Max is an acquired taste that prioritises off-road hardware over showroom bling. And it’s a ute that’s undoubtedly more XLT than Raptor. But it absolutely has a place for those who use their trucks as they were originally designed.

READ NEXT: Which Ranger special edition to choose?