With strong off-road credentials and a competitive price, can the uniquely-styled Nissan QX80 carve a niche in the petrol 4x4 market?

It has a big nose and it only comes with a petrol engine.

But, with strong off-road credentials and a competitive price, the Nissan QX80 might still have what it takes to carve a niche in the petrol 4x4 market…

The QX80 is a Y62 Nissan Patrol with more luxury gear and features, as well as a unique nose and rear bumper designed to give it a distinctive appearance. It certainly stands out; although, we’re not sure how many people will lunge lovingly at its bulbous snout. 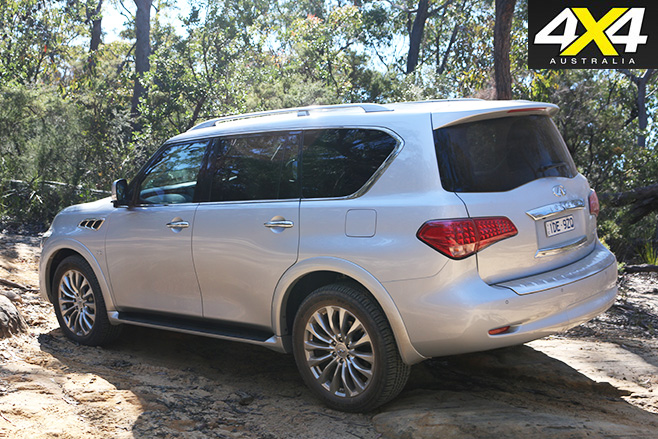 But there’s still the foot-operated park brake and the same look and feel of a Patrol inside. Indeed, most of the interior is Patrol, right down to the seating for eight. That means a basic colour touchscreen and an instrument cluster without the detailed colours and attention to detail you expect for this money.

Simply accessing the QX80 is something of a feat. It’s a big machine and one that really needs those side steps. Even loading gear into the tailgate requires a decent lift; such is the height of the boot floor. Once there, it’s a spacious and comfy place to travel – and you tower above just about everything else on the road. There’s seating for eight; although, it’s a struggle to fit three adults across the third row seat. Many will probably fold the third row of seats flat, something done at the touch of a button (well, two actually). 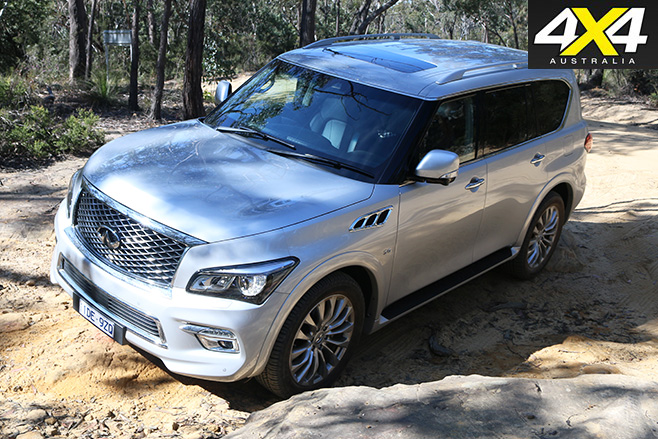 Small-item storage isn’t brilliant – there are door pockets and some covered cup holders – although, the cavernous centre console makes up points.

The QX80’s suspension is marginally stiffer than the Patrol’s, which combines with the larger, lower-profile 22-inch tyres (they’re 275/50s) to make for a slightly firmer ride. It’s all well controlled, though, thanks partly to the Hydraulic Body Motion Control that effectively stiffens the suspension on the outside of the corner to reduce leaning.

Not that you’ll ever mistake it for a lithe athlete. It’s still a big, heavy machine – a hefty 2837kg, or almost three tonnes – and its weight becomes immediately obvious should you ask it to change direction quickly.

The 5.6-litre V8 is a beast and is impressive in the way it somehow manages to bring decent performance to a vehicle weighing so much. Put that down to the 298kW of power and 560Nm of torque, not to mention the free-revving nature of the big engine, as well as its intuitive seven-speed auto. However, the cruise control doesn’t seem to be in sync with the engine; it struggles to maintain speed on hills, sometimes losing 20km/h or more before finally convincing the V8 to delve deeper. 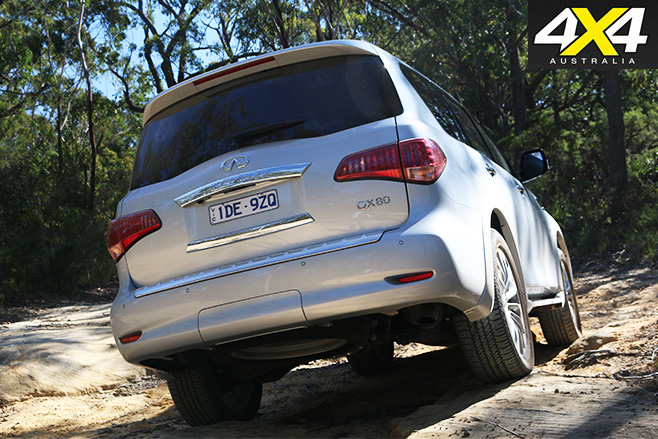 A heck of a lot less impressive is fuel use. It’s claimed at 14.8 litres per 100km, but in everyday driving we found it a struggle to keep it below 20L/100km. And you can easily exceed 25L/100km. That it prefers premium unleaded adds to the bowser pain. Oh, and the 100-litre tank doesn’t tend to go far; you might get 500km between fills.

It’s quiet, though, and impressively refined.

The QX80 has a ground clearance of 245mm, which is great in isolation, but 38mm less than the Patrol. Still, for crawling over rocks or keeping away from high ridges between wheel tracks, it’s fine.

But it’s the approach angle that lets the QX80 down. At 24.3 degrees, it’s miles off the Patrol’s 34.1 degree approach; that’s largely because of the lower clearance and also the unique bumpers that stick out farther (the QX80 is 165mm longer than a Patrol) and have a more aggressive lower lip. This means you have to be a lot more careful when tackling anything taller than the front bumper. 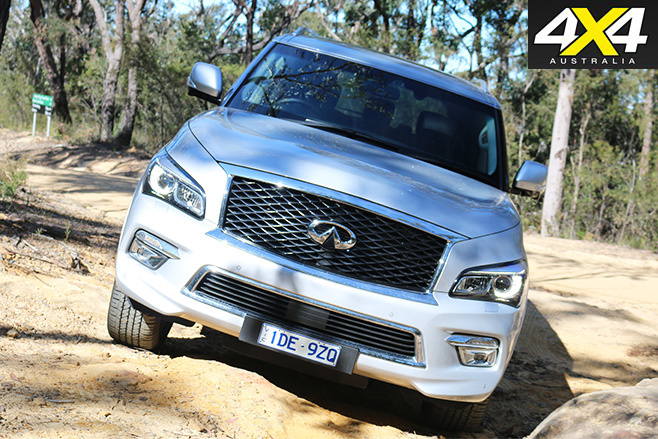 There are no issues with the four-wheel drive system. The permanent all-paw system can be run in 4H or for low range for off-road where the rear diff can also be employed. On top of that, there are three dedicated off-road modes for the traction control – sand, on-road and snow.

The QX80 isn’t as well suited as some at carrying a load either, as the gross vehicle mass (GVM) is 3500kg. By the time you put people and their luggage on board, it doesn’t leave much room for camping and recover gear.

The QX80’s biggest issue is one that also haunts the Y62 Patrol – a lack of a diesel engine option. And while the 5.6-litre unit does a good job of shifting all that metal, it also does a stellar job of draining the local petrol station. 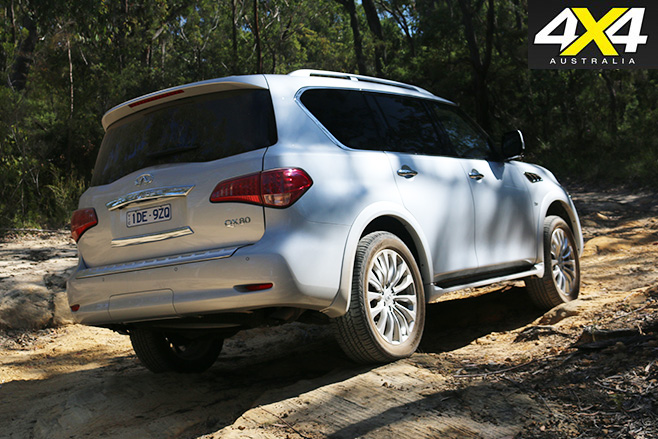 But it’s the price that is the thing likely to make the QX80 a niche player in an already small niche. The Ti-L Patrol gets almost all the same gear and significantly better off-road credentials – and for $23,000 less. 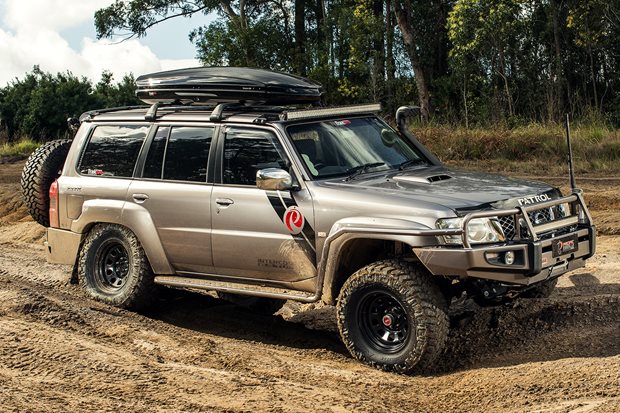 This Nissan Patrol has been equipped with an arsenal of weapons-grade modifications, including a military-spec 6.5L V8 diesel engine. 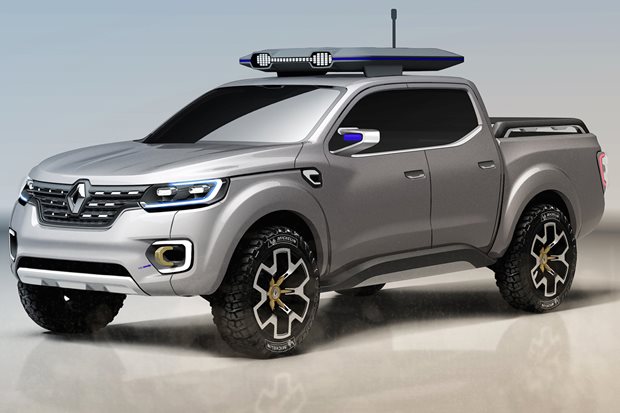 Renault reveals what its version of the Nissan Navara will look like. 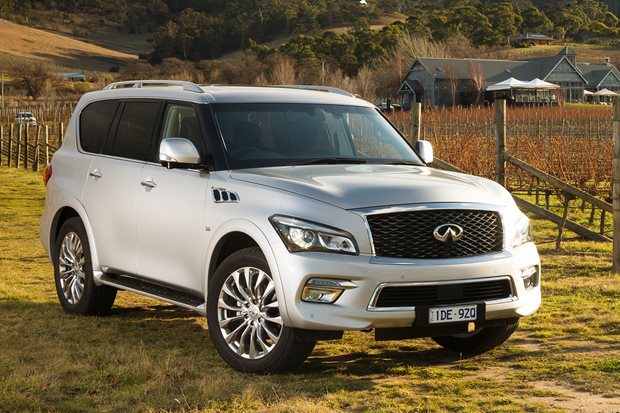 The all-mode 4x4 2015 Infiniti QX80 is the new flagship in terms of price, size and ambition for the luxury arm of Nissan 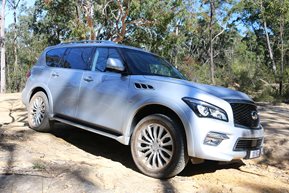