Shocking acceleration and all-wheel drive grip from two electric motors amps up the talents of the Model S.

WHY WE’RE TESTING IT
We visited the Tesla head office and factory south of San Francisco and took the opportunity to get behind the wheel of the brand’s new flagship.

THE WHEELS VERDICT
The Model S has always been quick off the mark, but the p85D delivers a truly concussive accelerative punch. It’s a pretty comfy cruiser. Just don’t take it on a race track.

PLUS: Brutal acceleration; ripper colour touchscreen; comfortable and luxurious
MINUS: Brakes not up to the 515kW task; elevated seating position; looks and smells the same as a regular Model S

THE WHEELS REVIEW
Fastest four-door in the world. It's a big claim and one that has been boasted by a diverse mix over the decades, from Aston Martin, Lotus and BMW, to locally produced Fords and HSVs.

Now the mantle goes to a Tesla - at least if your definition of ultimate speed is the 0-100km/h dash.

The Model S dual motor is claimed to top 100km/h in 3.3 seconds, a tenth or two shy of Porsche's 911 Turbo, a full second ahead of the HSV GTS and a blink or two ahead of the Mercedes E63 AMG. Even the four-wheel drive version of Benz's executive express manages the milestone in 3.6 seconds.

Much of the Tesla's V8-smashing performance comes in the first half second. Have a scout around YouTube and you'll spot videos of contorted faces and iPhones pinned to the seatbacks as it whistles off the line like you’ve parked it on a level crossing in the path of a bullet train.

The launch from a standstill is surreal. Like a 1990s computer game, once you've punched the accelerator it's like a switch to instant excitement. Suddenly you're doing 30, 40, 50 clicks with no sign of the go-forward-fast show slowing.

What’s electric (sorry) about the Tesla’s power delivery is the lack of any let-up. From the instant you breathe on the accelerator it’s a fiery forward thrust that simply doesn’t waver. There are no gear changes to halt momentum and no sniff of wheelspin as you take off.

Even more eerie is the lack of noise. Without the cue-in of a rise in revs, you’re unprepared for the step-off and when you do get rolling it masks the pace you’re (quickly) building. What’s more, it's one of the few cars I've driven where it's difficult to stop your head jolting as you take off.

Only once you pass the tonne does the energy feel like it's petering out, and that's partially because of the ferocity of the few seconds it took to get to that point.

For the most part, though, the dual motor - or P85D, as it's officially called (P for performance and D for dual motor) - is like any other Model S. Same spacious interior, albeit with a floor that's a tad high due to the battery pack underneath. Same hushed cabin and same outsized control screen that unlocks all manner of infotainment goodies.

But the P85D doesn't scream performance in the same way as its hot shot, petrol-fuelled rivals. There are no wings or fins, no extra exhausts (still zero!). Not even some subtle intakes or mirrors to give the hi-po game away.

Owners will have to make do with the unique badge, but any random with a screwdriver can quickly relegate your P85D to any old Model S.

Not that it's likely to wipe the smile off owners' faces. They've still got the right pedal.

But not all is ballistic with the P85D. Stopping doesn't have the same aggression. Four-piston Brembos up front bite hard and quickly, and for a few stops will arrest the slinky five-seater brilliantly. But it doesn't take much of an enthusiastic downhill run to limber the pads to the point where they're threatening to flame.

Put that down to the weight - there's 2.2 tonnes to slow - and the fact you're arriving at corners much quicker than you would be in the less powerful Teslas (or most other cars).

So it's more potent cruiser than race track bruiser.

Not that the Model S is lacking cornering talent. Sticky 21-inch Michelins (245mm wide at the front, 265 at the rear) allow you to push on hard, with impressive balance and a meaty, reassuring feel to the wheel. The extra weight over the nose (the balance is almost bang on 50/50) helps with turn-in but it'll ultimately understeer if you exercise all that torque injudiciously.

No matter how hard you push, though, it's difficult to get any meaningful body roll. The bulk of that weight sits in the floor in the form of batteries, with the electric motors also sitting low in the chassis.

So while it’s not perfect, the P85D is supremely talented, in its own earth-hugging way. 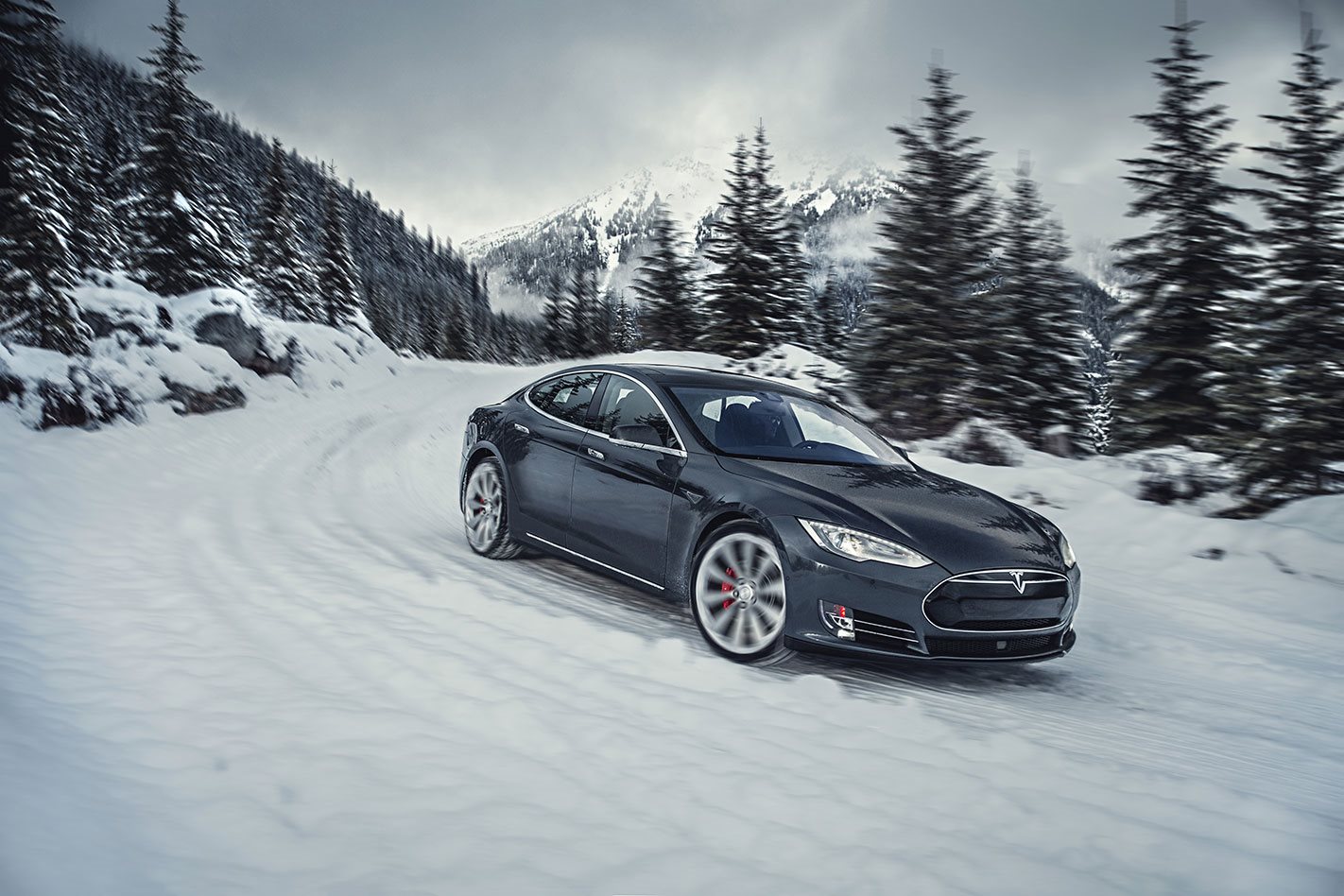 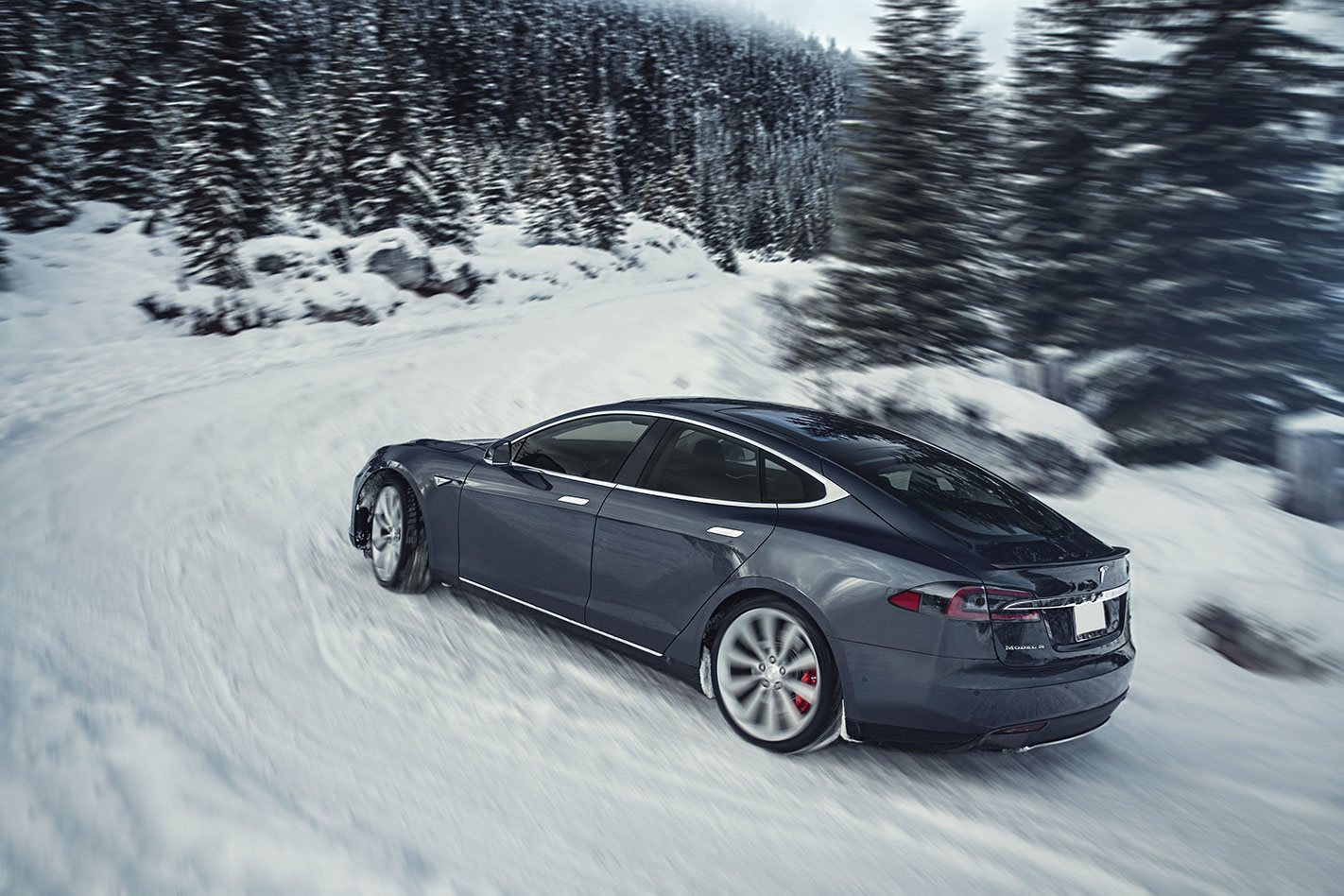 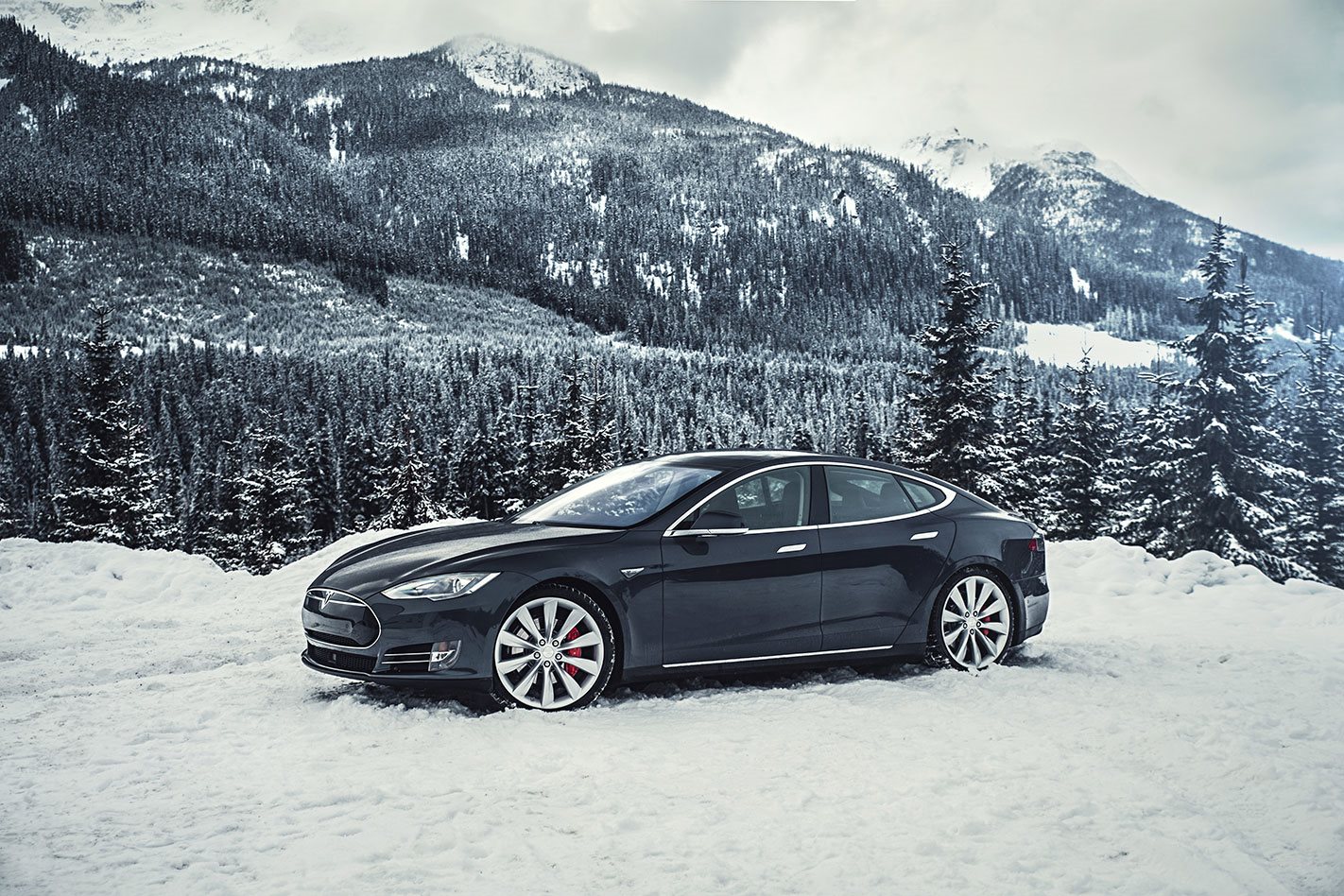 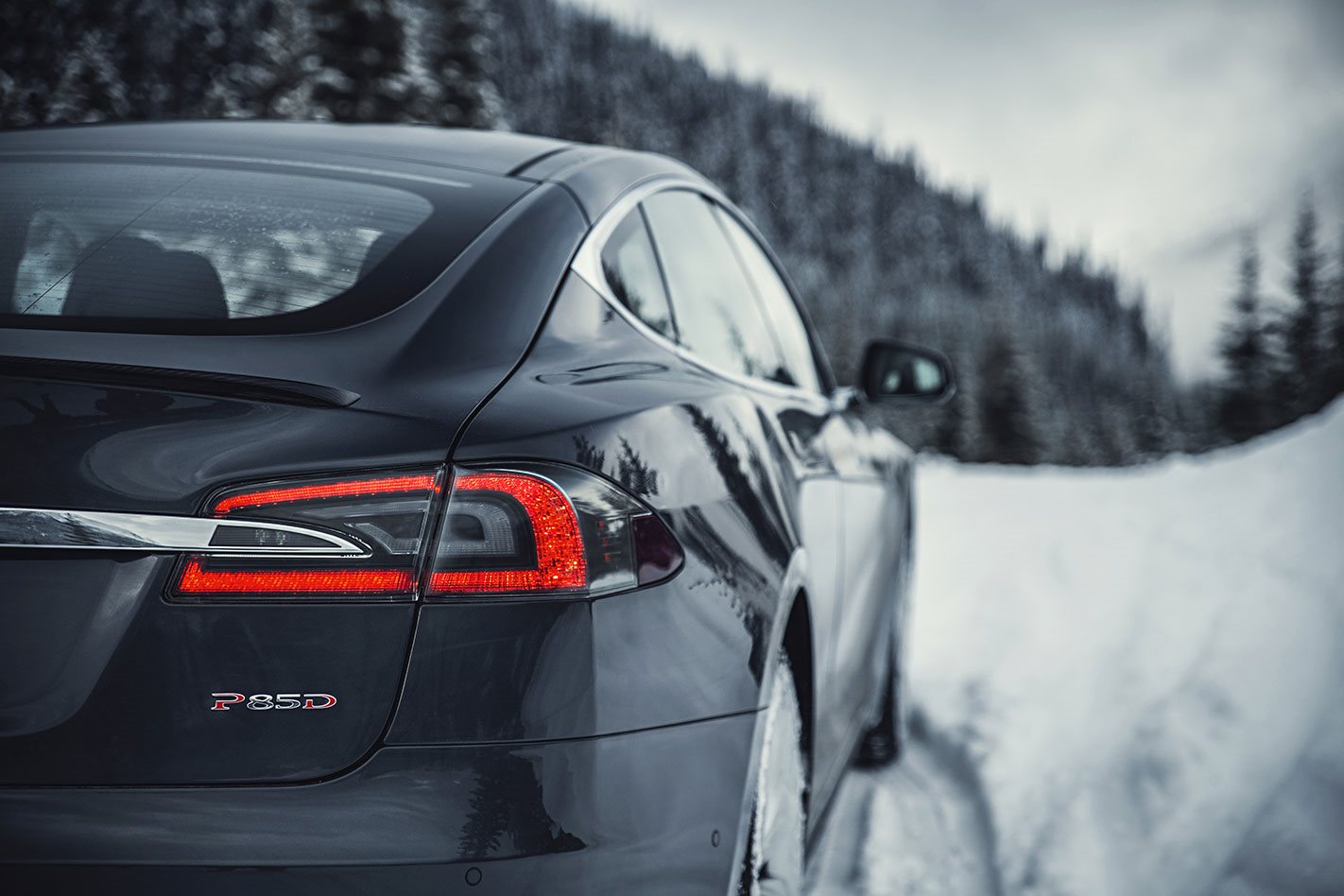 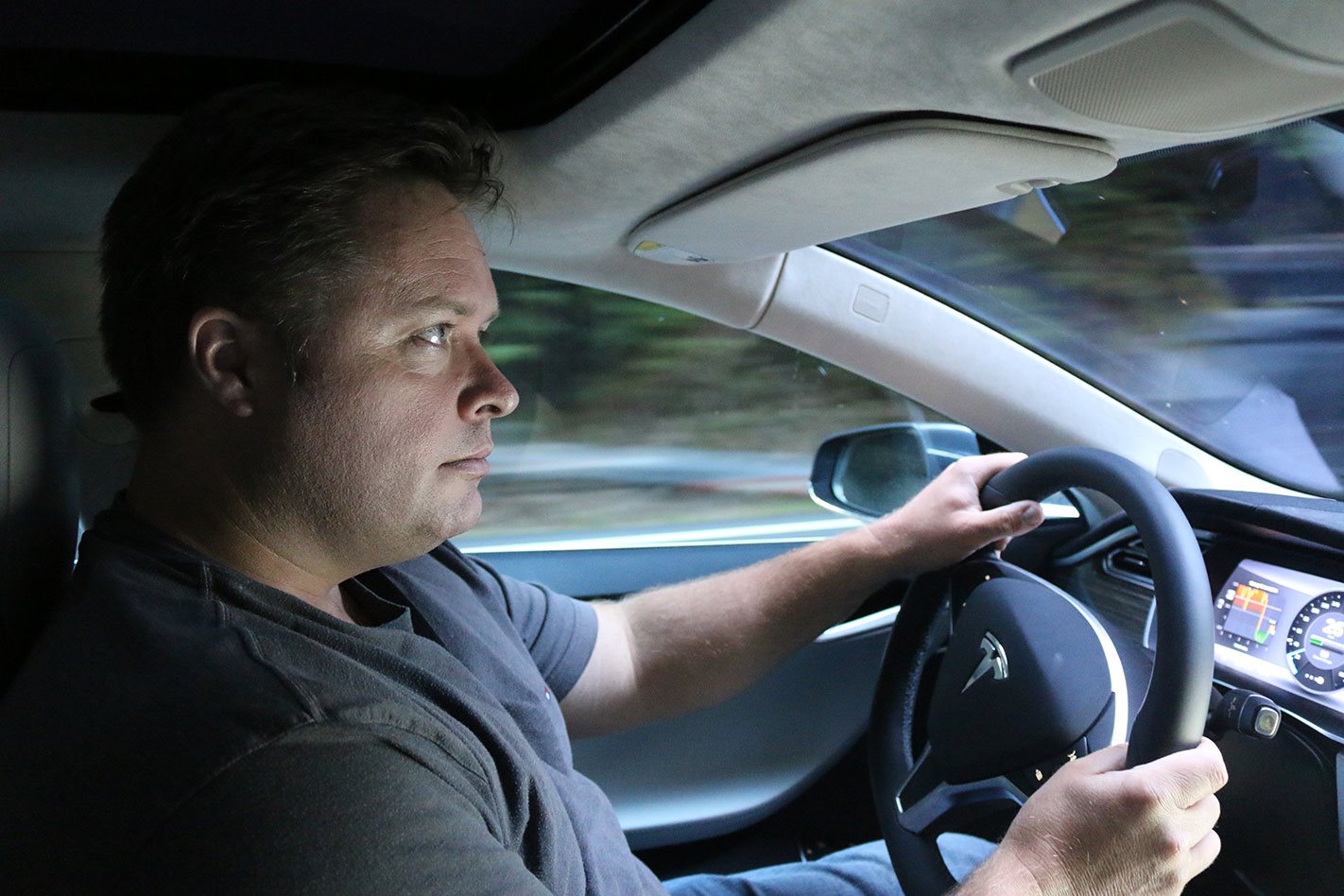 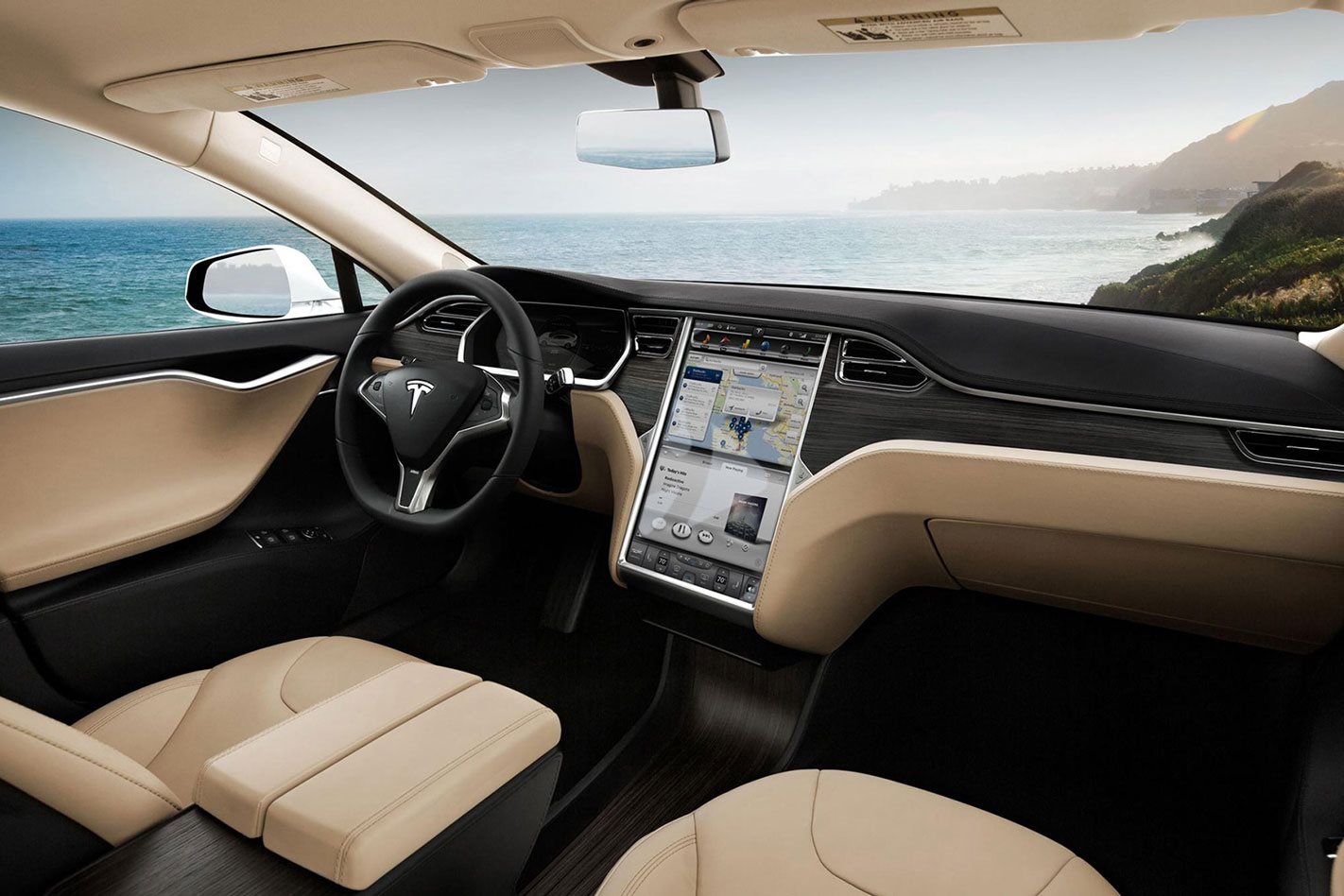