Granted, the V6 variant makes up almost 90 per cent of all private Amarok sales in Australia, which isn’t surprising when you consider it makes around 100 more Newton metres than its four-cylinder stablemate, and you don’t have to swipe the credit card for that much more coin. In fact, owners can now get all of the benefits of six cylinders and have change from $50K. So, offering a manual variant is a gamble well worth taking, we reckon. 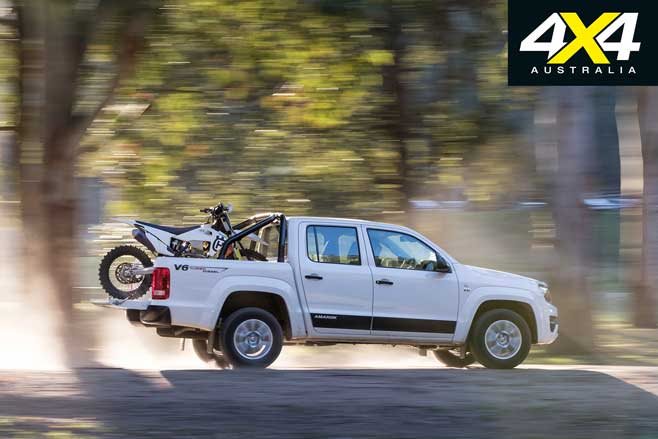 The stick-shift entry into the market means this Amarok is the only V6-powered manual dual-cab on sale in Australia – very niche, you could say. Volkswagen has already sold 60 V6 manual variants, and demand for more is on a pure wait-and-see basis, with VW officials biding their time to see how many units shift in initial months.

The six-speed manual gearbox in question is the same gearbox used in the Amarok four-cylinder variants, but the shifts have been recalibrated and materials strengthened due to the increased torque running through it. The shifts are clean and there’s plenty of power from the V6 engine on tap early, which helps when overtaking slow caravanners on freeway entry ramps. Planting the throttle to the rubber footwell provides ample urge without much fuss; the engine is smooth and quiet for a diesel.

The V6 is the 3.0-litre turbo-diesel unit with 165kW (180kW on overboost) and 500Nm – 50Nm less than the auto V6 variants but 80Nm and 100Nm more than the four-cylinder models. Engineers spent some time strengthening aspects of the V6 variants to cater for the hike in torque, including adding bars in front of the radiator for added protection, and strengthening the front diff housing. 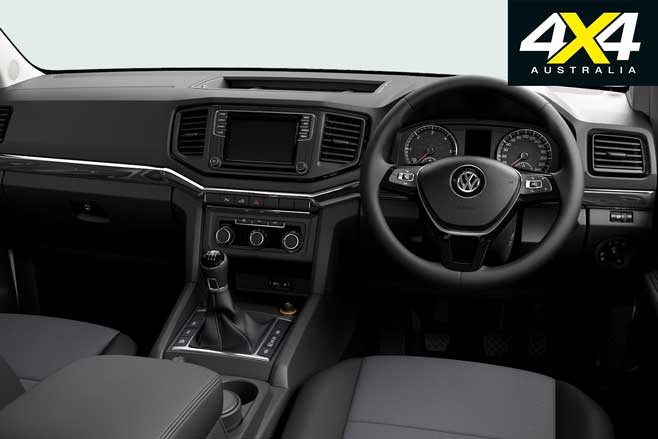 It’s on the highway when you have to remind yourself that you’re driving a dual-cab ute. Yes, really. The combination of the smooth, punchy engine and the slick-shifting six-speed manual, as well as the uniquely located leaf springs at the rear – positioned beside the chassis rails rather than beneath them, and in-line with the rear diff – sure-up balance, ensuring the Amarok remains passenger-car-like on freeway runs.

Off-road, though, is where the manual Amarok V6 reaps the biggest benefit, with VW pairing the six-speed manual with a traditional part-time 4WD system with a two-speed transfer case (high and low range); in lieu of the auto’s permanent single-range 4WD system. Now with a locked 50/50 torque split and low range, the manual V6 Amarok should appease 4x4 purists who questioned the auto’s full-time set-up. 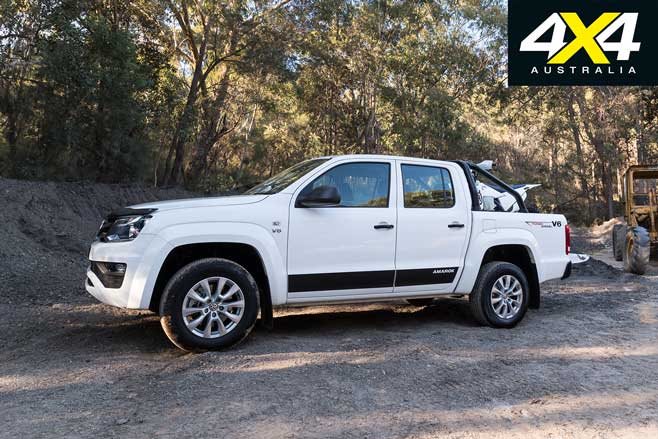 In addition, the manual V6 Amarok is equipped with a mechanical diff lock for extreme low-speed off-roading – ABS/ESP deactivates once the diff lock is engaged – as well as an Off-Road Mode which activates electrical interventions including Electronic Stability Program (ESP) and hill-descent assist (with a control range between 2km/h and 30km/h).

For troglodytes who believe electronic aids are for wimps, there’s the option to go old-school low-low without technological intervention. However, you’re not entirely on your own, with electronic brake support remaining in play to ensure you don’t end up belly-up.

With the 4WD systems activated, via simple-to-use buttons either side of the gear stick on the centre console, the manual Amarok V6 proved it’s just as capable on the dirt as it is on bitumen. With grip often akin to an ice-rink on the test route at the Melbourne 4x4 training and proving ground in Werribee, the Amarok – on all-terrain rubber, mind you – excelled on the slippery slopes. 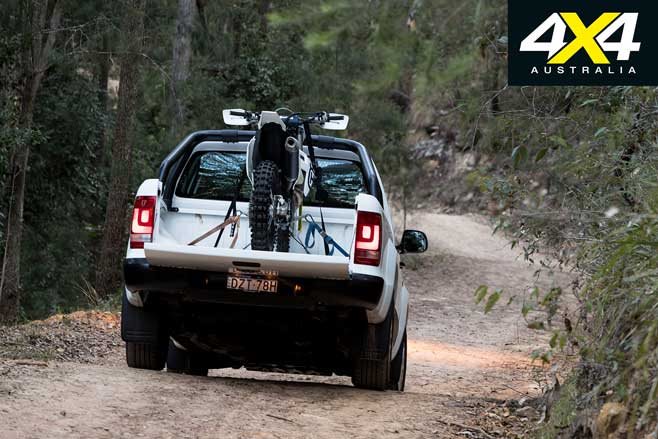 These slightly aggressive all-terrains (deflated to 22psi) are stock ’Rok equipment, meaning they’ll be slapped beneath Amaroks leaving showrooms, and they provide a fine balance between on- and off-road performance.

Despite tricky inclines saturated from constant rain and torn up by the recon rigs, the Amarok remained well-planted and composed, with adequate approach (23°) and departure (23.6°) angles and plenty of wheel travel. However, V6 ’Roks have a wading depth of just 500mm, so a snorkel would be a great addition.

Readers of this magazine know the Amarok V6 auto is a very comprehensive vehicle, in the upper echelon in terms of premium dual-cab offerings despite its ageing platform, and that won’t change until the Ford-Volkswagen partnership swings into full motion for the next-gen in a few years’ time. 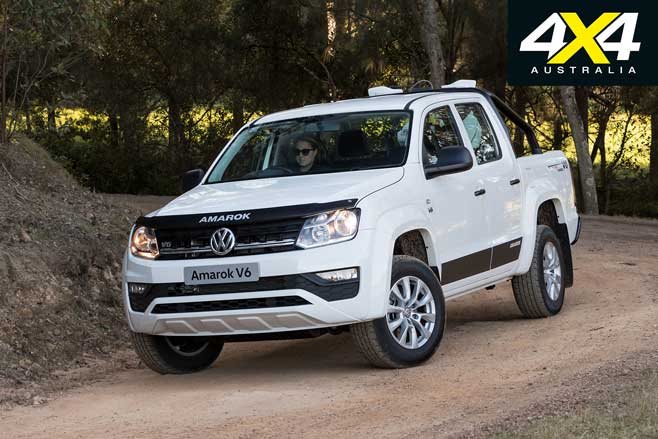 Even in base Core spec the current Amarok is well equipped, with a well-appointed cabin that’s simple yet effective in its layout. It gets cloth seating, a leather-wrapped steering wheel, heavy duty front and rear rubber floors (extremely useful on our test day) and a touchscreen with modern apps including Apple CarPlay/Android Auto. The touchscreen can be controlled via buttons and dials, of great benefit when off-road.

The three-pedal cog-swapper has a load capacity of 1004kg and less towing capacity than the V6 auto – 3000kg versus 3500kg. On the safety front it may still lack rear and side curtains, as well as autonomous emergency braking, but it’s encouraging that brands are listening to what fans want. While it might be very niche, it’s nice to know that there are brands like Volkswagen that are still willing to bring to market something for the traditionalists.

The Amarok V6 Core 4x4 manual and V6 Core Enduro 4x4 both have an RRP of $49,590, the latter adding black ‘Enduro’ side decals, a front bonnet protector and black sports bar. 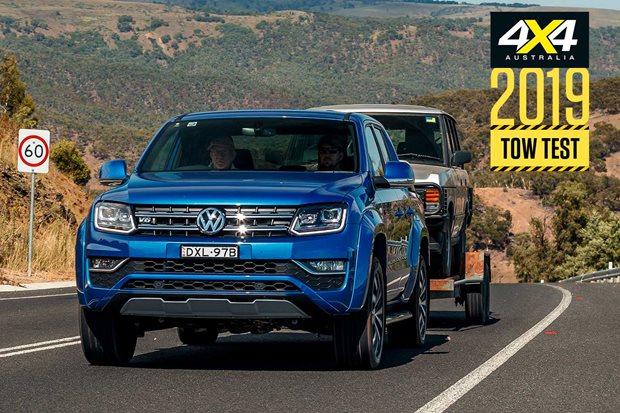 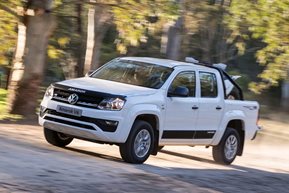