WhichCar saves you the research to bring you the most inexpensive cars on the market, ripe for end-of-2016 bargains.

Mitsubishi Mirage ES - $12,250
A list price of $12,250 makes the Mirage one of the most popular light cars on the market. It’s powered by a punchy 1.2L four-cylinder engine that delivers an impressive fuel economy figure of 4.6L/100km. Despite its low price-tag, the Mirage is loaded with creature comforts including six airbags, stability control, ABS, hill start assist, Bluetooth, air conditioning and more. If manual cars aren’t your thing you pick up a Mirage ES with CVT auto from $13,490.
Mitsubishi has stopped bringing in Mirage sedans so you should be able to drive a hard bargain, [LINK https://www.whichcar.com.au/car-advice/inside-advice-on-getting-the-best-deal-on-a-new-car ] such as free on-road costs, for any still in the showroom The spacious Suzuki Celerio will happily seat four adults while featuring a TARDIS-like 254-litre boot. The car’s 1.0-litre three-cylinder engine and sharp handling characteristics make it well-suited as a city runabout. The Celerio drinks just 4.7L/100km and is equipped with all the essential tech-goodies. The sub-$13,000 price is for the manual, however, the CVT auto is still a bargain at $13,990. The pocket-sized Holden is aimed at a younger audience and is designed to provide a ‘fuss-free’ city-driving experience (which is actually quite fun) with a spacious interior and class-leading tech. New for the Spark in 2016 was the 1.4-litre engine that provides a combined fuel economy figure of 5.2L/100km. This price is for the five-speed manual - if you don’t want a clutch, the CVT auto retails for $15,690. 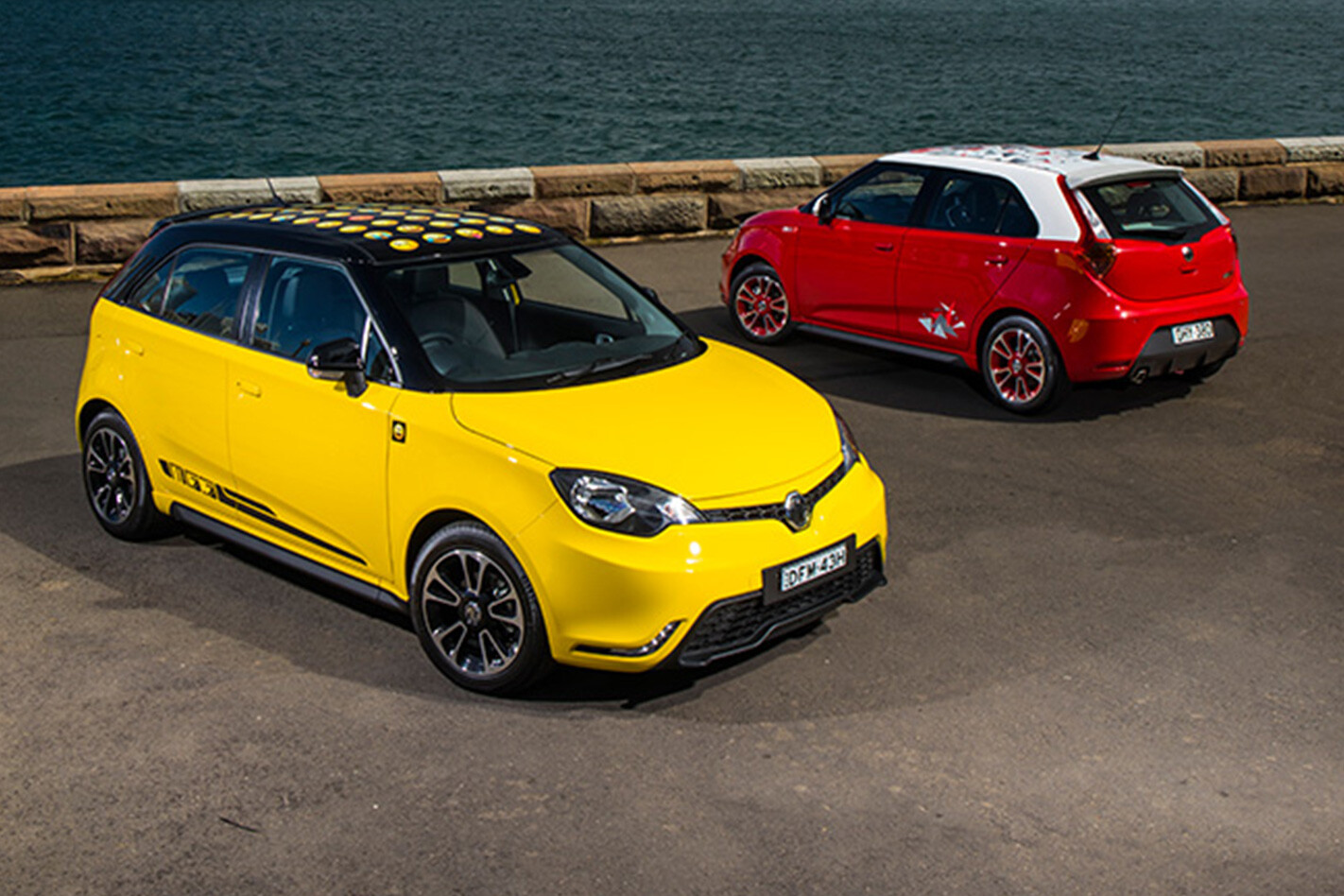 The iconic British brand is back with two Chinese models both priced under $15,000. The MG3 Core is the entry model of the three-tier line-up and 78kW 1.5-litre four-cylinder petrol engine mates to a five-speed manual transmission. The entry-level Core comes equipped with the standard six airbags, mandatory electronic stability control [LINK https://www.whichcar.com.au/car-advice/traction-control-and-esc ] and 14-inch steel wheels. The mid-level Soul MG3 costs $14,990 with the addition of remote central locking, Bluetooth and audio streaming and steering wheel audio controls The Nissan Micra has been universally lauded for its refined fit-and-finish though it is getting a little dated. The car’s 1.2-litre three-cylinder motor allows for a comfortable and composed drive but is slightly thirstier than its competitors with a fuel consumption figure of 5.9/100km. The Micra is one of the most comprehensively-equipped cars of its kind with plenty of safety, entertainment and comfort features onboard. The above price is for the five-speed manual version with the four-speed auto retailing at $15,290.
The Nissan Micra is on its way out, with Nissan Australia yet to commit to the new model so you should be able to score a bargain. The MY17 Holden Barina update saw the price of the entry-level manual version drop below $15,000 despite receiving extra kit including reverse camera, 7.0-inch MyLink infotainment system with Apple CarPlay and Android Auto, LED daytime-running lights, six airbags, automatic headlights, rear parking sensors, fog lights, cruise control and 16-inch alloy wheels. The five-speed manual version is powered by 85kW 1.6-litre four cylinder petrol engine that drinks 6.8L/100km. The six-speed auto costs an extra $2771.
While already being one of the best value cars on the market you should be able to drive a hard bargain as this model enters its runout year. The Jazz is a step up in exterior and interior size over many other cars in its price bracket. It’s also one of the most powerful. It features a 1.5-litre four-cylinder engine that burns 6.3L/100km. On the inside you’ll find a touch-screen display with a rear-view camera as standard, as well as clever folding rear seats that allow for a heap of extra luggage space. The CVT auto will cost an extra $2000, though the manual is more fun to drive. The baby Hyundai has enjoyed a sales boom this year. It has a 1.4-litre engine that consumes 5.7-litre/100km and produces adequate power for urban cruising. Luggage space is aplenty for a car of its size and all the essential technology you’d expect is onboard including a 5.0-inch touchscreen display.
The interior is soft to the touch which keeps in line with the car’s forgiving suspension and steering feel. The $14,990 price tag is for six-speed manual hatch and sedan variants, with the CVT auto costing an extra $2000. 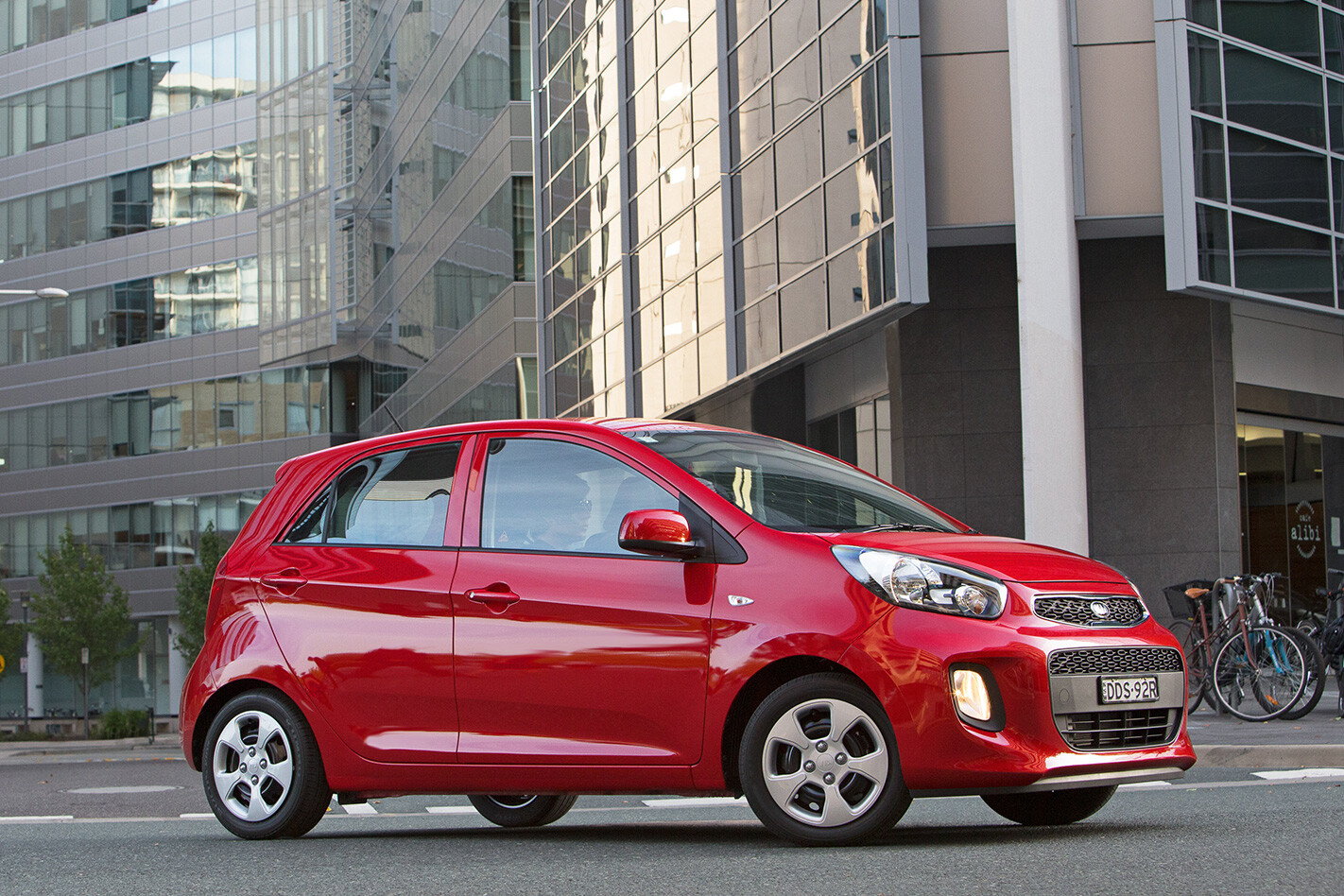 One of the few automatic cars under $15,000, the four-door Picanto is one of the best city hatchback buys. It’s powered by a gutsy 63kW 1.2-litre four-cylinder engine that sips petrol at a rate of 5.2L/100kms. It has four-wheel disc brakes, rear parking sensors, six airbags and Kia’s seven-year warranty. 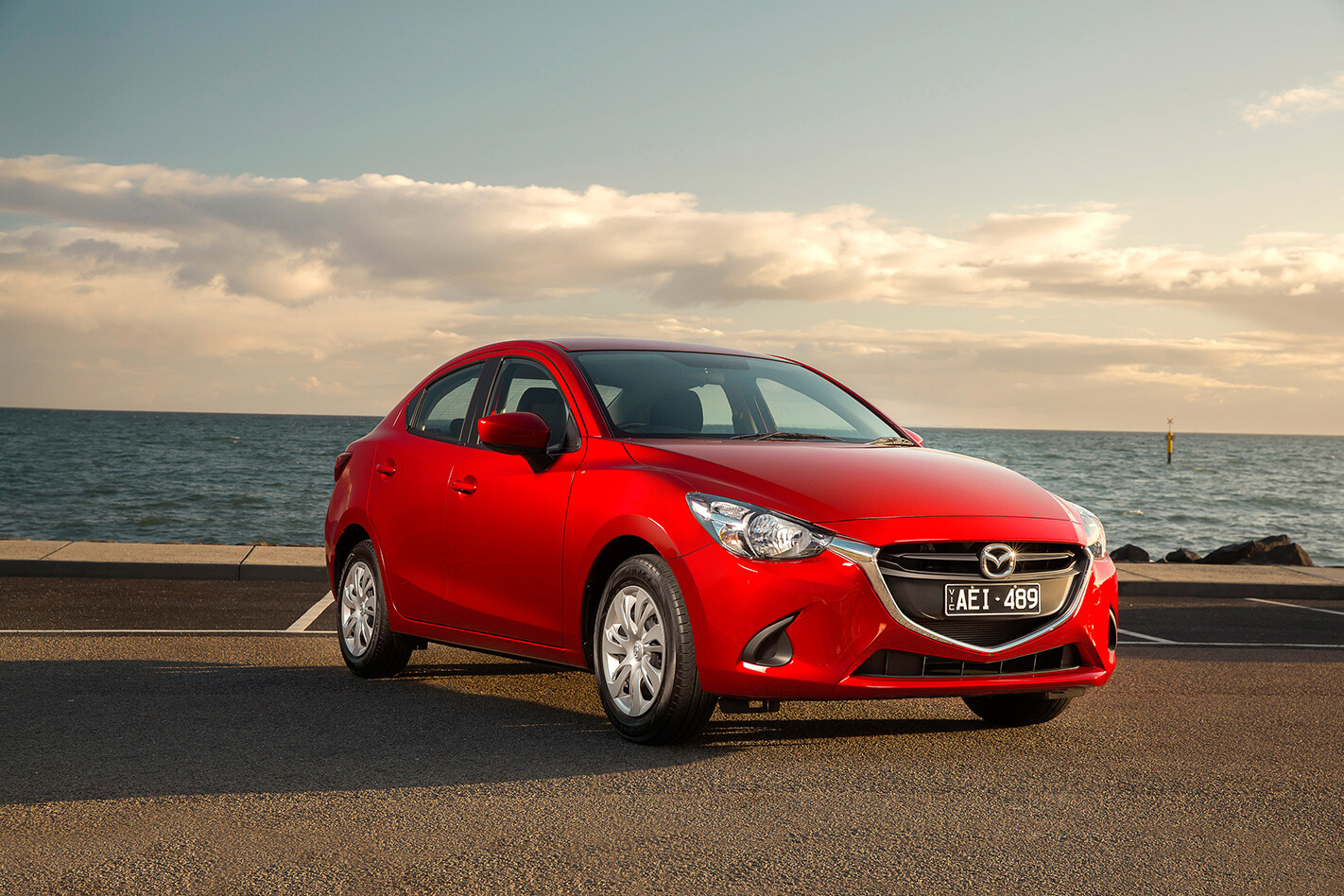 The six-speed manual version of the Mazda 2 hatch and sedan is a great little driver’s car with responsive performance, engaging steering and a zippy engine that makes it one of the most enjoyable city runabouts on the market. It has a stylish exterior design and is easy on fuel, with its 1.5-litre four-cylinder engine powers the little Mazda, producing a fuel consumption rating of just 4.9L/100km. If you’re not sure about driving manual this is a great car to get reacquainted with a clutch, though there is a six-speed automatic transmission for an extra $2000.