The hits keep coming for one of Jeep's best-sellers after the Jeep Wrangler rolled onto its side after two frontal-offset crash tests.

In a first for the US's Insurance Institute for Highway Safety (IIHS) body, the 2019 four-door Wrangler fell onto its passenger side after striking a deformable barrier at 64km/h, sliding across the floor of the test cell and into a safety barrier.

Chosen as part of a routine audit program that verifies the findings of carmaker tests, the latest Wrangler hasn’t actually been crash-tested in the United States at all, outside of Jeep owner Fiat-Chrysler’s own testing.

“Rollovers — even partial ones like those that occurred in the Wrangler tests — are especially dangerous crashes, in part due to the risk of complete or partial ejection,” said the IIHS in its report. “This is a particular concern in the Wrangler, which has a roof and doors that can be removed.”

The Wrangler also misses out on curtain airbags, thanks to that removable roof.

Other than the rollover, the driver's space was maintained well, and the dummy's movement was well-controlled, according to the safety body.

It scored Good ratings – the IIHS’s highest mark – in moderate front overlap and side testing, as well as for roof strength and head restraints/seats.

After the Wrangler rolled in the audit test, the IIHS reported that Fiat-Chrysler questioned the method that IIHS engineers had used to attach the vehicle to the crash propulsion system.

“IIHS agreed to conduct a second test using a different method, which was approved by Fiat Chrysler. The second test also ended with the vehicle tipping on its side,” read the report.

“FCA has produced more than 500,000 of these vehicles,” said Fiat-Chrysler in a statement issued to US media outlets after the test results were released. “By conservative estimate, they have accounted for 6.7 billion miles [13 billion kilometres] of on-road driving.

"From this population, we are unaware of any incidents that correlate with the vehicle dynamic portion of the IIHS test result. With more than 75 available safety and security features, the Jeep Wrangler Unlimited meets or exceeds all federal safety standards and continues to win acclaim from news organizations (sic) and consumer groups."

The brand also pointed out that no single test determines vehicle safety.

“FCA routinely monitors third-party evaluations and factors such findings into our product-development process. We design our vehicles for real-world performance. And real-world data, along with continuing demand, indicate the Jeep Wrangler Unlimited meets or exceeds customer expectations,” it said. 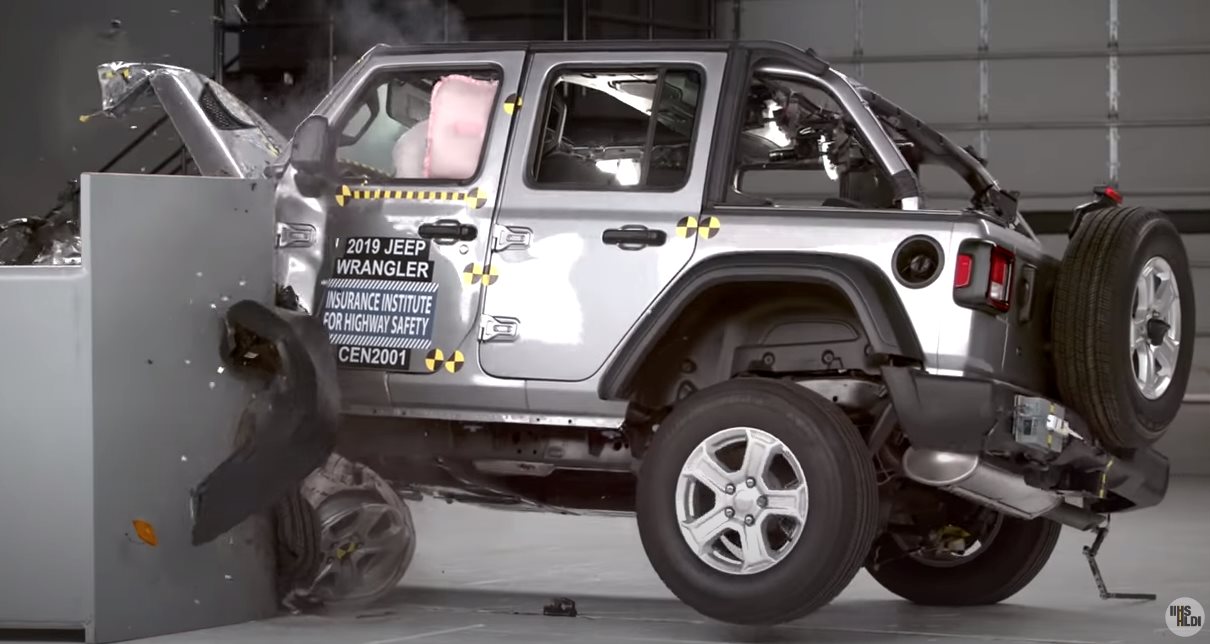 The Wrangler has come under fire for its poor safety rating in Australia and Europe, initially scoring just one star from five in NCAP testing. After the fitment of AEB, that score was raised to three stars in December last year.

“These upgrades are welcome, and I commend the local supplier for moving to provide Wrangler buyers in Australia and New Zealand with collision avoidance capability,” ANCAP Chief Executive, James Goodwin said at the time.

“While a three-star rating is still somewhat shy of the expected five stars, all upgraded models now have the ability to detect and assist with avoiding a crash with another vehicle – both in lower and higher speed scenarios.”