Why the four-door Ford Mustang is a terrible idea

A Mustang with four cylinders makes perfect sense, but four doors is a Ford faux pas

Once you have stopped laughing at the notion of one of the most iconic muscle cars being defaced with an extra set of doors, and the seeming unlikelihood of such an automotive travesty, take a few breaths and allow me to explain exactly how close to midnight the doomsday clock is reading.

Ford couldn’t have possibly imagined, even in its wildest dreams, that the Mustang would receive such a resoundingly warm reception when the first right-hand drive version hit Australian shores in 2014.

Yes, expectations were high given the half-century delay it had taken for the iconic pony car to make it Down Under, but unprecedented demand and a complete sell-out of the initial run of more than 6000 cars took virtually everyone by surprise.

Read next: Rumours of four-door Ford Mustang could point to upcoming crossover

All the time, arch rival GM sat on the sidelines seething at the Mustang’s success, the General’s hands tied with no right-hooker Camaro rival to stride in and steal some of the stampede action. FCA was in the same boat with its strictly left-hand drive Dodge Challenger.

But just as one twist of fate allowed Ford to thumb its nose at the competition from a safe distance, a different product strategy appears to be turning the tables and has the Blue Oval in a bit of a flap.

Sure, Ford was able to monopolise the lucrative Australian muscle car market unchallenged with its Coupe and Convertible Mustang, but its recent strategy to slim down its passenger car offering and focus on SUVs and trucks has given its American opponents a chance to steal back a little grace – in the muscle sedan arena. 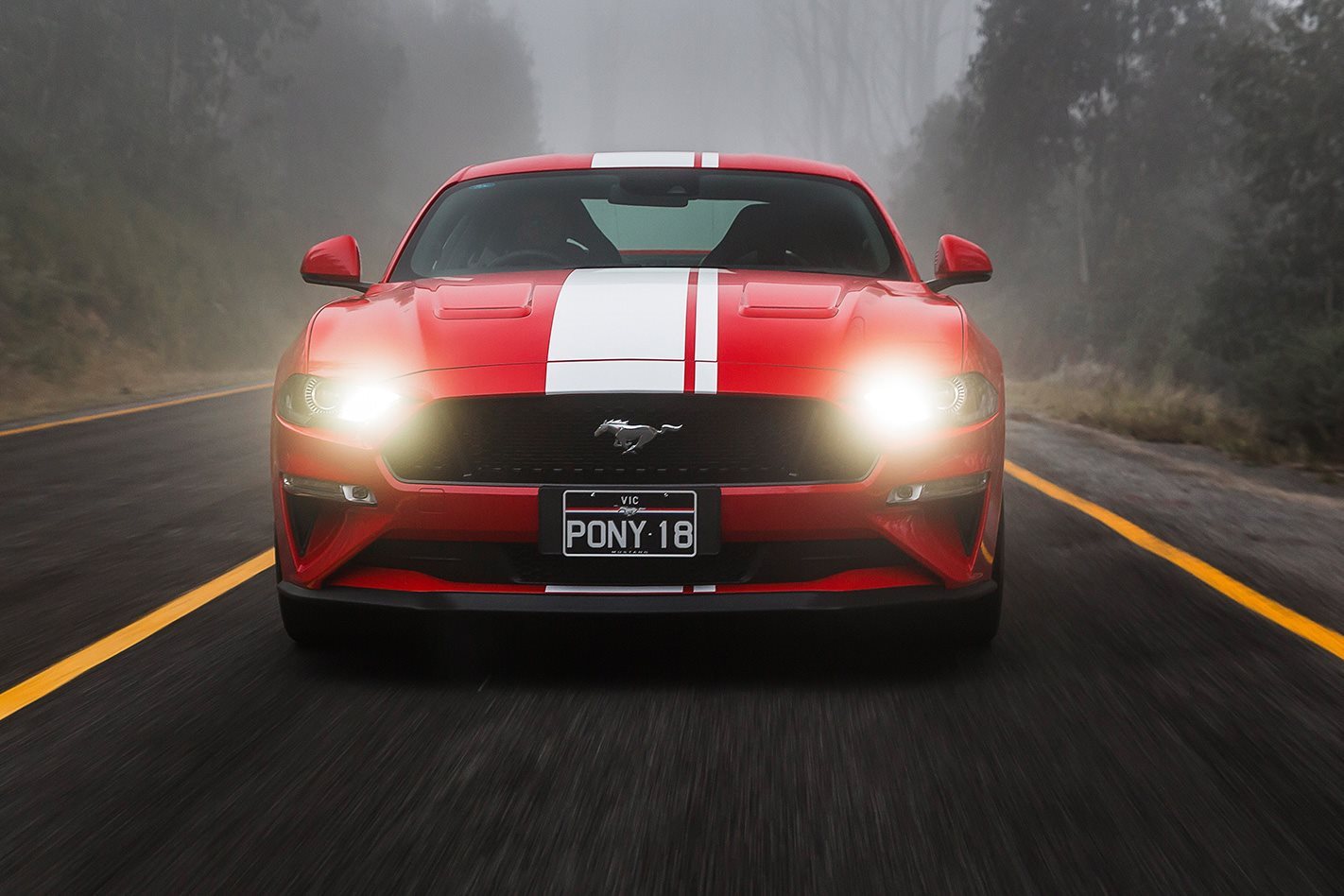 Unlike GM, which offers the mighty supercharged V8 Cadillac CTS-V, and Dodge’s Charger – effectively a four-door version of the Challenger, which is available in a number of tyre-destroying variants, Ford simply can’t compete. Other theories state Ford is going after Porsche’s Panamera.

Suddenly the idea of a four door Mustang doesn’t seem quite as absurd as it first appeared right? But while the business case sort of stacks up, absurd it still is and perhaps now you will entertain the notion of why Ford definitely shouldn’t build it.

First of all there’s the matter of brand value and plain old fashioned pride. If you need an example of how easy it is to trash an icon look no further than MG. What was once a prestigious symbol of British sportscars, slowly sagged to representing a range of vehicles that were rebadged lukewarm Rovers, to today, where the Chinese-owned company is (I’m being as kind as I can here) exclusively a purveyor of affordable SUVs and passenger vehicles.

There’s only so long a brand can take a battering before the supporting columns crumble away and all its original founding cache is forgotten. And the galloping horse is no different.

For now the Mustang is a bastion of brawn and in 50 years it has only ever adorned the bonnet of two-doors, but now it appears some naughty dealers have leaked Ford’s intention to create a more family friendly version.

Sportscars are hallowed ground; vehicles that get away with sacrificing some practicality to be faster, more beautiful and downright more desirable. Trying to make the Mustang cater for even a small part of another audience will surely start to flake some of that chrome lustre from its badge.

Even more worryingly, some rumours suggest the unconfirmed model will not just sprout a proper second row of seating, it could even grow a little ground clearance and evolve into a crossover. Imagine retiring Winx to a life of seaside fun rides for kids and you’re close to a comparable level of cruelty.

And are we not forgetting damning safety ratings from Euro NCAP which chastised the Mustang Coupe for a number of offenses including insufficient rear occupant protection!?

On hearing that news, I was quick to leap to the Mustang’s defence. After all, if you are a driving enthusiast like me, you probably don’t care about the lack of lane departure warning and rarely subject passengers to the torture of the laughable rear seats.

But if you are now offering those same people doors to access a more accommodating second row, I’m afraid I have to suddenly give a damn about occupant safety.

It is not the first time the iconic muscle car has created controversy, but the decision to introduce the 2.3-litre turbocharged four cylinder Ecoboost, which many fans still herald as sacrilege, is in no way as offensive as a four-door Mustang.

A high-output four-pot makes sense, particularly to someone raised not in a culture of V8’s and bigger-is-better, but in a country where fuel is expensive and shrieking turbos are king.

I like the Ecoboost and, if it were my money, I would go manual four-banger Mustang every time. For a start the lighter front end is sweeter to steer and while, it might not have the correct soundtrack, a naughty exhaust system from Roush would at least partly alleviate that. A few more dollars would donate a fat turbo, shiny intercooler and a rolling road fettling which would have me embarrassing GT drivers at the lights.

But I’m not sure I could have the same unapologetic fun or hold my mirror aviator bespectacled head as high in a version that had the wrong number of doors. However, there is a beautifully simple solution to this entire potential calamity.

Rather than bludgeoning the beloved brumby with an awkward four-door that shares the same name as the handsome coupe and convertible, forge a fresh new moniker and allow the Mustang to keep galloping free as it always has.

Have your say below: Is a four door Ford Mustang a terrible idea?