The all-new Kia Rio holds up well against most of its light-car competitors but how does it fare against the highly regarded Mazda 2?

The light car segment used to be the bargain basement class packaged primarily for younger people who supposedly didn’t care too much about equipment levels and driveability.

Mazda was one of the first to provide this, with the current generation Mazda 2 that satisfies on many fronts with great handling and performance plus recently-introduced automatic emergency braking. 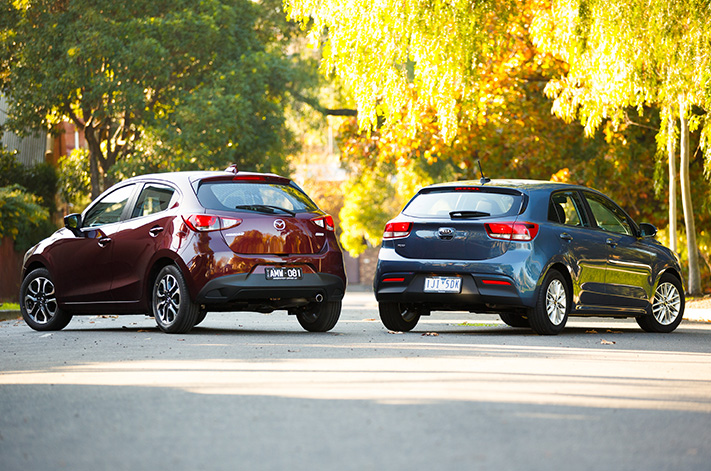 Kia has also brought maturity to the segment with its fourth Rio that features European-inspired looks, improved ride and handling, higher interior trim levels and a modern infotainment package.

It holds its own against the pack, but we decided to see how stacks up against the Mazda 2 which is held up as the class benchmark.

In the blue corner, the similarly priced 2017 Mazda 2 Genki hatch [$22,690] with six-speed auto – while this is $1200 more than the Kia it’s a fair comparison spec-wise when you consider the Genki with six-speed manual retails at $20,690. It’s similarly appointed to the Rio Si with extras including a head-up display, automatic city braking, blind-spot monitoring, rear-cross traffic alert and a more powerful 1.5-litre engine.

The third-generation Mazda 2 hatch arrived in 2014 with a mid-life update this year adding more technology but only minor aesthetic tweaks.

Inside you’ll find a clutter free interior that uses materials well to give it a premium feel, such as the fabric covering the hard plastic door inserts and stitched faux leather along the dashboard and metal finish/look trim. 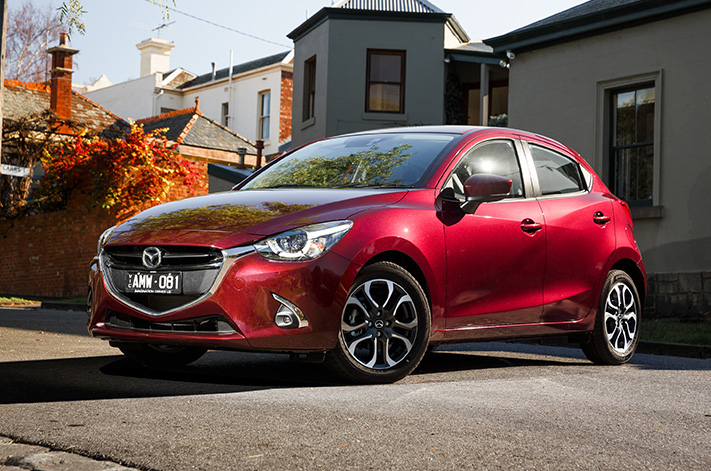 The Mazda 2’s interior echoes the rest of the range with a floating infotainment screen with rotary controller on the centre console. Infotainment functions are intuitive, though Mazda IS yet to get on the Apple Carplay or Android Auto bandwagon and  our test car would only pick up ABC channels on digital radio.

The front seats are comfortable with good lateral support and allow for a low driving position unlike other light cars such as the Toyota Yaris that feel like you’re sitting on a barstool.

Where the Mazda 2 loses points is passenger and cargo practicality, starting with the back seats. They’ll easily seat two adults though the bottom cushion is quite short meaning a lack of under thigh support. Leg room is also pretty tight with knees touching the front seat, but headroom is good. While there’s a map pocket behind the front passenger seat, the rear doors have no bins or cup holders. 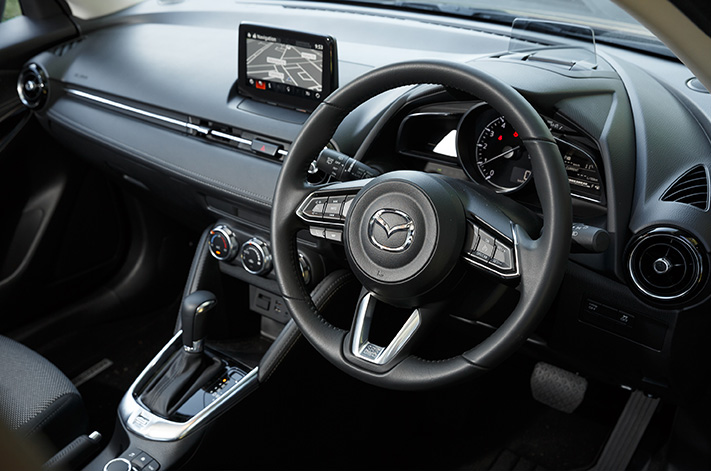 At 250 litres, boot space is also tight especially when compared to the cavernous Rio and the tight rear opening seems to be more about function than form. If you want more space it’s worth looking at the Mazda 2 sedan which has a 440-litre boot, however it’s not available in Genki spec.

The Mazda gains points when you press the push button start and select drive. The SKYACTIVE-G 1.5  direct injection engine is responsive with the automatic transmission that provides smooth transitions though  the gears. Flick the Sports mode switch and there’s more pep and torque at low speed for some extra zip. 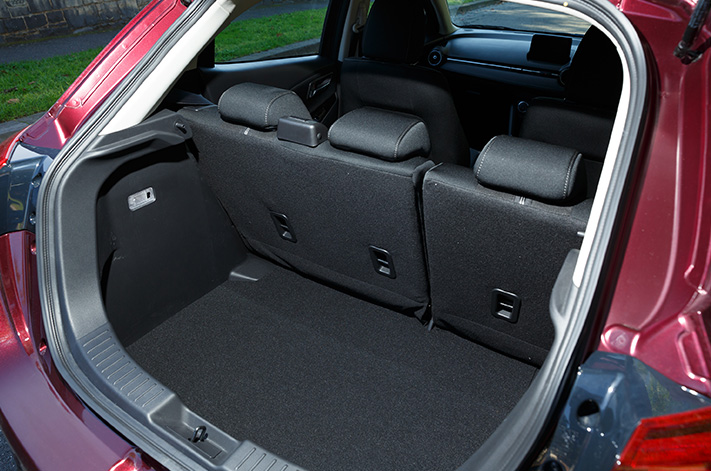 Fuel economy during our test drive was 7.2L/100km on suburban and country roads and mostly in Sport mode.

The ride can be a little stiff on rougher roads though this could partly due to the 16-inch alloy wheels. But the dampers absorb bumps well with little bounce back.

Steering is well weighted and direct. The April 2017 facelift added G-Vectoring Control which adjusts engine torque to steering action so the front wheels comply with your request while load is transferred to the rear wheels so they duly follow. This works well in slippery conditions and drivers will generally be unaware if and when the electronic stability control [ESC] steps in to correct direction. 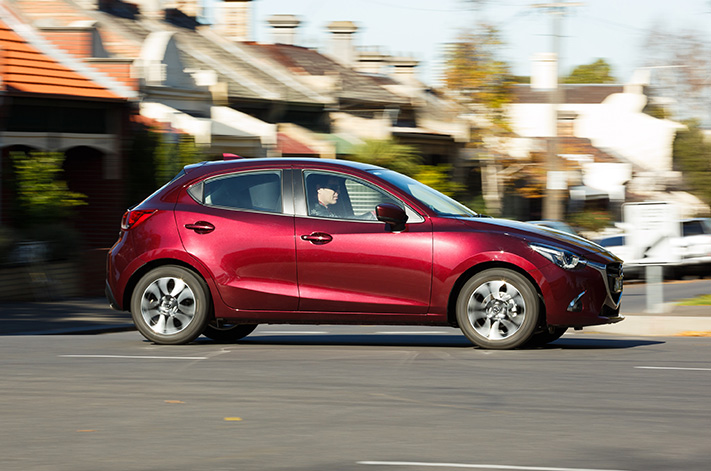 Vibration through the car is well controlled and refinement has improved compared to older Mazda 2 models.

The recent facelift also brought advanced driver assist functions including automatic city braking, which uses an infrared sensor to sense an object in front and applies the brakes at speeds up to 30km/h to prevent a collision. Other active safety tech includes blind spot monitoring and rear cross traffic alert.

Mazda 2 punches above its weight in terms of equipment and driveability that make up for its practical shortcomings.

The previous generation Rio was introduced in 2011 and was the Korean carmaker’s most popular model thanks to attractive looks and a relatively roomy cabin, but it was cheap and cheerful inside.

The Korean carmaker employed its European and Californian design studios to give its all-new Rio hatch a fresh, more advanced look. It is slightly bigger than the model it replaces thanks to a 10 millimetre longer wheelbase. This means more room inside, while cabin improvements and new technology impart an upmarket feel and bring a sense of maturity to Kia’s light segment entrant. 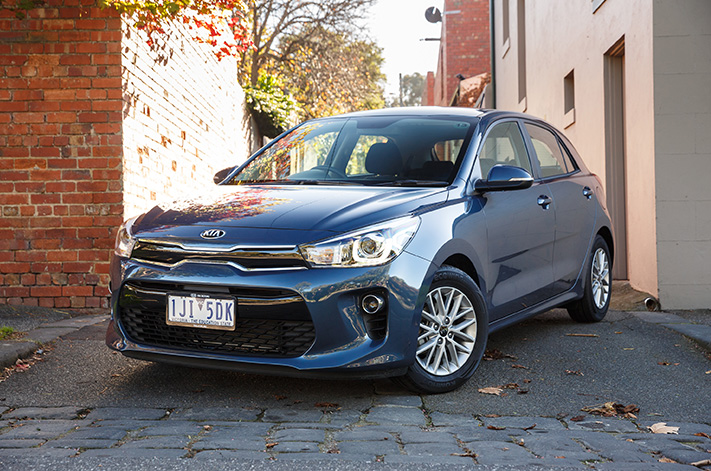 The interior is understated but elegant, with a 7-inch floating infotainment screen and none of the visual clutter of the previous model.

Piano black surfaces add to the premium look and the illuminated gauge cluster is bright and detailed without being complicated. That said the top of the dashboard and door trims are still a tribute to cheap plastics and undermine some of the finer detail elsewhere.

The infotainment system has Apple CarPlay and Android Auto connectivity with intuitive menus and the touchscreen is easy to operate when in motion. The DAB+ digital radio interface is one of the better ones in terms of finding channels and storing favourites. The sat-nav is easy to set, and can warn you about approaching fixed speed/red light cameras. 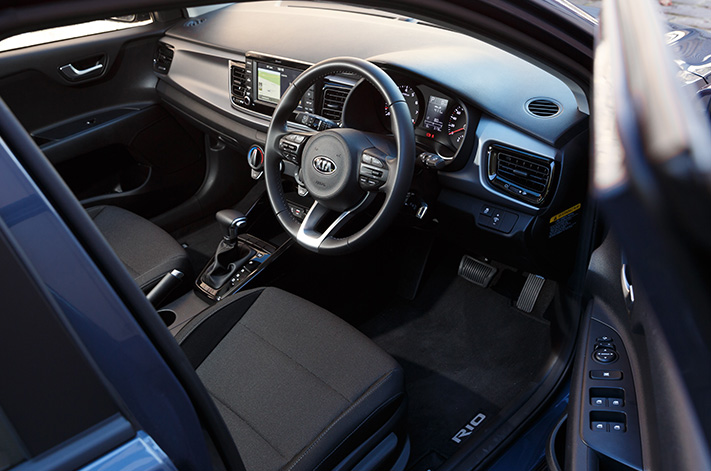 Like the Mazda the driving position is comfortable but doesn’t have quite as much lateral support. Interior storage is excellent for a car this size and includes a centre console bin with padded lid that acts as an armrest, cup holders in the centre and all four doors, sunglass holder above the mirror, and a generous space in front of the gear knob to leave a phone and keys.

The Rio’s emphasis on practicality is also evident in the rear seats, which have their own USB port, a tray to place small items and a map pocket behind the front passenger seat.

The back seat itself easily sits two adults with good head room and a little more legroom than the Mazda despite wider base that provides better under thigh and lower back support. The straight window line means better side vision for kids. 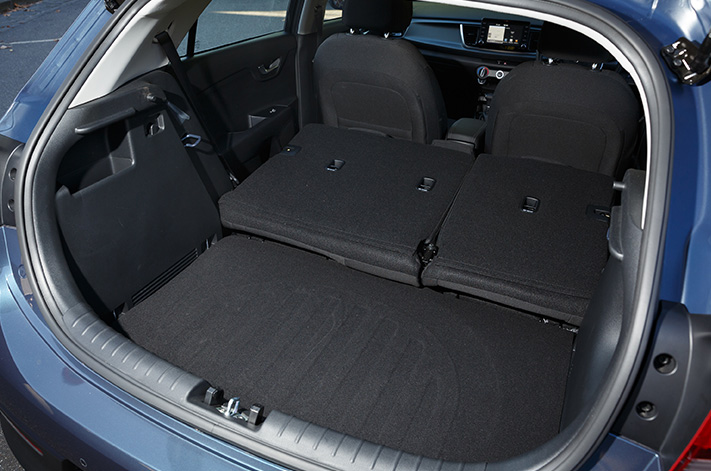 Boot space is up 37 litres compared to the old model to a substantial 325 litres. This triples to 980 litres with the 60-40 split rear seats folded down and the wide hatch opening helps make loading cargo easier.

Handling has also been improved, with Kia’s Australian engineering team tuning the suspension to suit local conditions. It complies well even on choppy dirt roads and the ride is firm without being hard, though it can be a little spongy on bigger bumps. There is a bit of disconnect between the front and rear particularly on gravelly bends, which made the ESC work hard to ensure the rear wheels followed the front.

Steering also feels nicely weighted though there’s a little bit of play when driving in a straight line, necessitating minute corrections to stay in control. 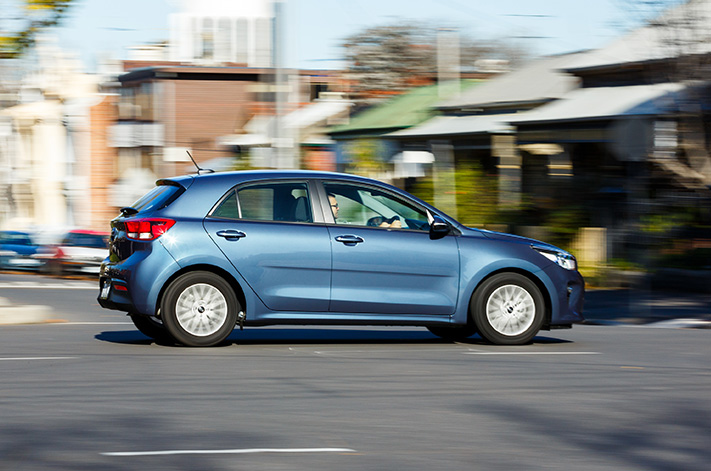 Road and engine noise is also reasonably low and generally on a par with the Mazda, though you do get a bit more wind noise through the doors seals than the Mazda as well as a higher din from under the bonnet at high revs.

All the effort that went into improving the Rio’s design has been partly undone by Kia’s decision to carry over the weaker of two powertrains from the previous range with a 1.4-litre four-cylinder petrol engine coupled with a four-speed automatic transmission. It’s OK around town, but putting the foot down results in plenty of noise but little motivation.

During our testing fuel economy was 7.2L/100Kms, which isn’t bad considering there’s no fifth gear to bring revs down.

The other notable omission is the lack of an advanced driver assistance pack, including automatic city braking.

That said, the 2017 Kia Rio succeeds in providing a good, value-packed and practical car that’s a pleasant to drive and comes with a seven-year warranty. 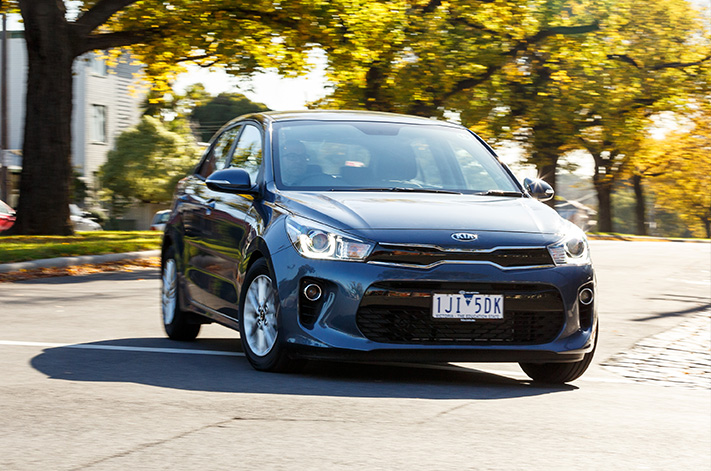 Kia is still an aspiring brand and has worked hard to make the Rio a more sophisticated and capable car with well executed design changes.

But Kia also took the easy route to attract people to showrooms by upping the size and spruiking practicality without doing the hard work such as improving performance and active safety, unlike Mazda which has managed this without compromising affordability.

The $1200 price difference between the two cars we tested can be justified by the quality of their drivetrains alone, yet the Mazda also comes with considerable extras and you’ll enjoy driving it a lot more. 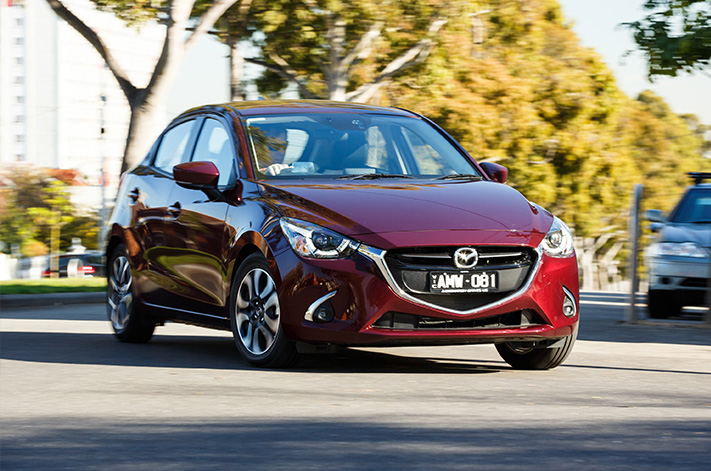