They’re the Swiss army knives of the car world, expected to cater to families big and small enduring everything from the school run to the big family adventure.

But in their quest to be all things to all people the large seven-seat SUVs often cut corners along the way.

But in 2017 the compromises are less noticeable, as shown by the Wheels Car of the Year-winning Mazda CX-9.

Since scooping COTY in 2017 the Mazda CX-9 has been under attack from competitors looking to claw back some of the high ground set by what was an impressive step up for families. 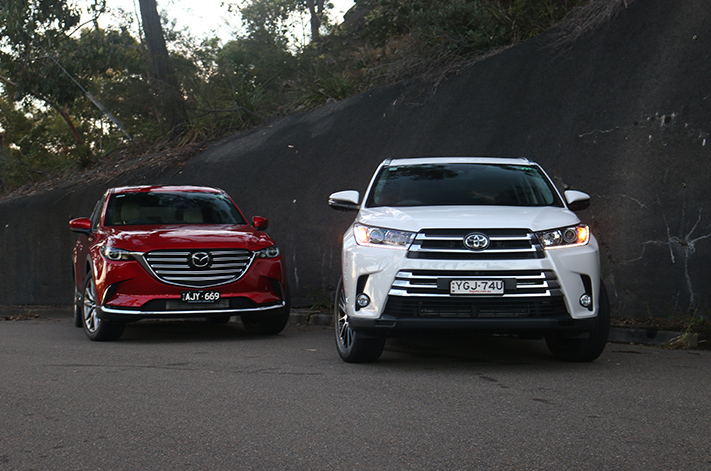 At the forefront is Toyota, which early this year ushered in a mid-cycle update to its popular Kluger. A new nose and bumpers headlined the aesthetic tweaks, but it’s under the bonnet where the more significant updates have taken place.

So, does the updated Kluger have the muscle to tackle the CX-9?

For this test we’ve assembled the Kluger Grande and CX-9 Azami, each top of their large respective trees and each with all-wheel drive.

Part of the Kluger’s premium goes into the subsidised servicing. Over three years or 60,000km you’ll spend just $1080 on servicing, whereas for the Mazda it’s $2795.

We’ll call that a draw, then. 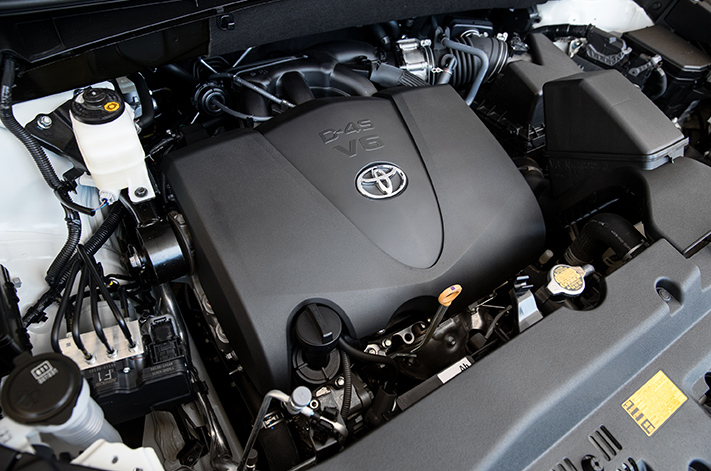 Each is dripping in gear, including leather, navigation, heated electric front seats, a sunroof, digital radio and side blinds in the middle row.

The CX-9 adds to the active safety artillery with rear auto braking, particularly handy for the prang-prone, or if a kid runs behind the car.

Its head-up display is also a handy addition, adding a digital speedo, something the Toyota does without.

The Kluger fights back with a DVD screen and a trio of headsets for those in the back.

The CX-9’s infotainment counterpunch is a beefy Bose sound system that is many decibels ahead of the thin-sounding generic brand in the Kluger.

If you’re looking to bust out of the ’burbs the full-size spare of the Kluger is a win, although make sure you bring a picnic rug and a few friends to unlatch it from its underbody compartment.

Keeping kids comfy and adults content is what these family large SUVs are all about.

The basic seven-seat formula is the same with each, but there are differences in the details.

Larger kids and adults will appreciate the extra 30mm of knee room in the middle row of the Kluger and its flat floor and broader door openings make for more elegant entrances and departures. 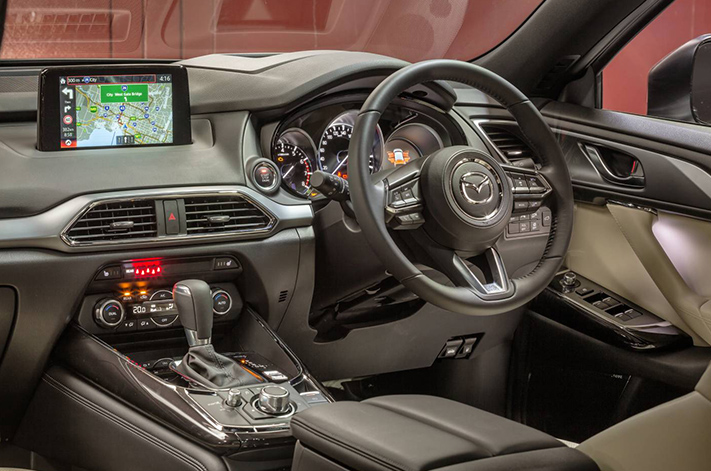 The CX-9’s seats kick it up a rung on comfort and the folding centre arm rest matches the Kluger’s for cupholders but also gets a covered box incorporating two USB charging plugs. That’s a hint of tech gold for tabletted teens.

The CX-9 takes a clear win with its top tether mounting point on one of its two third-row seats. It’s unique in this class, allowing more flexibility in placing younger children.

Without it, it means kids under eight years old can’t legally travel in the back row of a Kluger, relegating the grandparents (or larger children) to the back row. 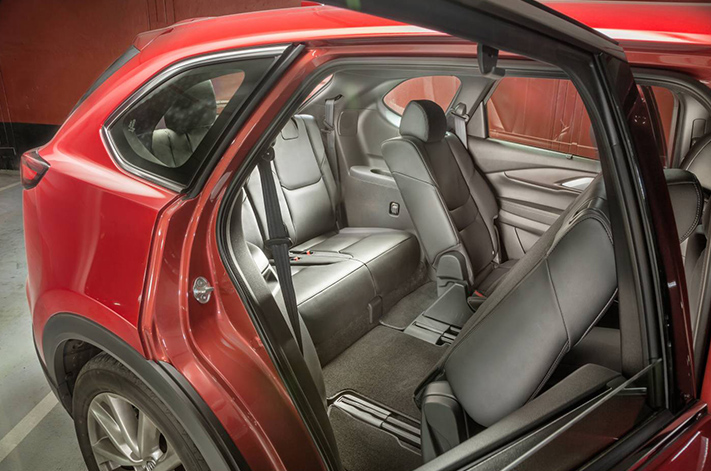 Clamber into the third row and the Toyota takes a win with its roof mounted air vents. The CX-9 instead relies on sending a draft rearward from the air outlets further forward.

Those wanting to carry large items may appreciate the 60/40 split of the Kluger’s third row, allowing a fraction more luggage space than the 50/50 split of the Mazda.

As for boot space, the CX-9’s is longer but narrower, while the Kluger gets some modest underfloor storage.

Forget hybrid and diesel; the CX-9 and Kluger stick to old school petrol for propulsion.

But each goes about it a very different way. The Kluger’s V6 uses cubic capacity to good effect, muscling up 218kW and 350Nm.

The recent infusion of direct injection along with a revised calibration for the six-speed auto makes for a far more pleasant device, leveraging its middle rev range and building pace swiftly.

Stamp on the throttle, then, and it’s a victory to the Kluger, doing a great job of overcoming 2100kg. 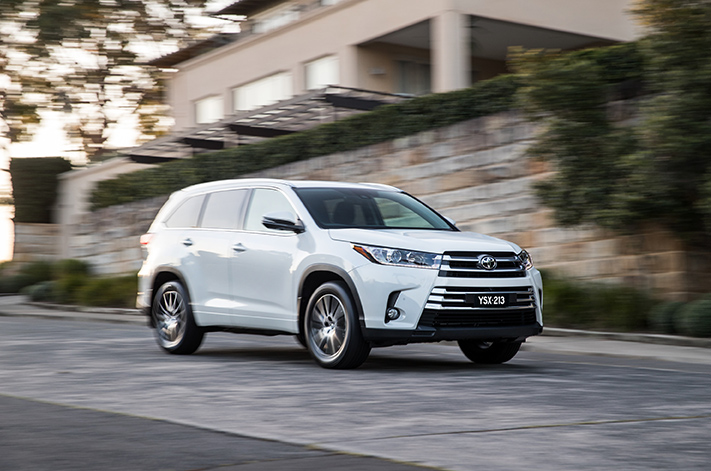 The CX-9, on the other hand, employs just four cylinders but picks up a turbocharger, something that gives it a tempting torque advantage.

The full 420Nm – 20 per cent more than the Kluger - is available from just 2000rpm, so there’s useful pull exactly where you need it – with no waiting for revs to rise, just a syrupy surge with an effortlessness that translates to relaxed motoring in most situations.

Burst past the torque peak and enthusiasm wanes, the transmission instead shifting up a gear and going back to grunting away with its turbo.

The equation is helped by the lighter frame; at 1924kg the CX-9 undercuts the Kluger by almost 10 per cent.

For regular driving the four-cylinder turbo is a better bet, but if you decide to unleash on a set of twisties the Kluger’s V6 is the more satisfying donk. 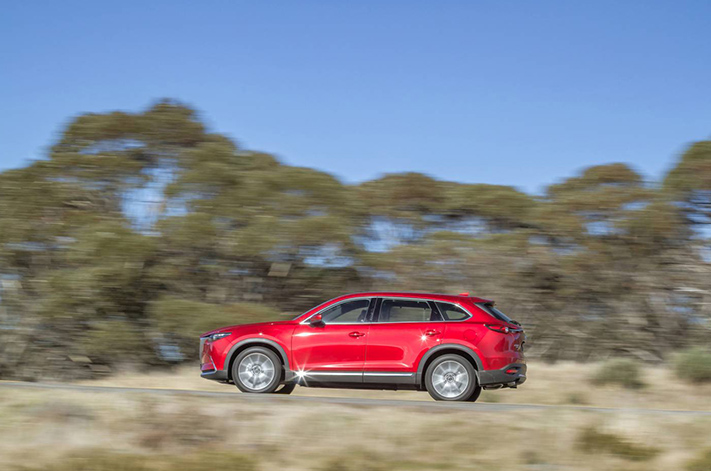 However, despite those efficiency gains the Kluger’s 9.5L/100km claimed consumption is higher than the 8.8L/100km of the CX-9.

Featherweight steering in the Kluger makes light work of parking but lacks finesse at speed.

And while the Toyota laps up sharp-edged lumps convincingly, the 20-inch hoops of the CX-9 ultimately hang on harder, making for more engaging cornering.

The CX-9 also wins on refinement, its hushed cabin adding to the upmarket ambience.

For larger families the Kluger’s extra millimetres could make sprawling teens all the more content. And the notable improvements to the V6 make for a more enjoyable and enticing machine.

But the Kluger is ultimately upstaged by the classy, thoughtful and well-executed CX-9. Any deficiencies are comfortably countered by clever thinking.

Its smartly packaged interior and effortless four-cylinder engine make for a winning combination.

If a seven-seater is on your shopping list then the CX-9 is still the weapon of choice in the large SUV segment.