Despite being the world’s most popular passenger car, the Toyota Corolla has long been seen as the vehicle of choice for people who see cars as an appliance, rather than something that’s fun to drive.

Seeking to prove that it could be both, the Japanese carmaker went back to the drawing board with its 12th-generation Corolla hatch, building it from the ground up on an all-new chassis, with a view to make it a significantly more refined and enjoyable ride.

We took to the road in the entry-level Ascent Sport with the 2.0-litre petrol engine and automatic transmission to find out of Toyota has managed to incorporate both driveability and engagement into its already-successful Corolla formula that has seen Toyota's small hatch reign supreme over rivals such as the Mazda 3, Hyundai i30, Honda Civic, Kia Cerato and Volkswagen Golf.

Priced at $24,370, the Ascent Sport is the cheapest automatic option in the new Corolla range, attracting a $1500 premium over the six-speed manual.

The vehicle we tested was the Ascent Sport auto in Glacier White, which is the only paint option not to incur an additional cost – the other seven colours attract a $475 premium. Optional extras included satellite navigation, digital radio (DAB+) and rear privacy glass, which are bundled together as part of a $1042 package, which took the retail price of our Corolla to $25,412.

The Corolla’s highly efficient 2.0-litre petrol engine has a frugal official fuel consumption rating of 6.0-litres/100km when coupled with the automatic transmission. Our real-world testing showed 8.1L/100km with a mix of highway and inner-city driving.

The Corolla is covered by Toyota’s three year/100,000km warranty.

The Corolla Ascent Sport Auto is the most advanced entry-level variant in its class, and comes with advanced safety features that were unheard of in small hatchbacks just a few years ago. These include adaptive cruise control, autonomous emergency braking with pedestrian and cyclist detection, lane keeping assist, and speed-sign recognition.

You also get a big 8.0-inch touchscreen with voice recognition, which clearly displays a reversing camera image with fixed guidelines. Infotainment includes AM/FM radio and connectivity with your mobile device via Bluetooth or USB for phone calls or music streaming. For an additional $1042 you can add satellite navigation with SUNA traffic information and digital radio DAB+ to .

The Ascent Sport rolls on 16-inch aluminium-alloy wheels and you get a full-sized spare alloy.

The 2018 Toyota Corolla is a five-door hatchback that seats up to five people.

Measuring 4375mm long by 1709mm wide, and weighing in at 1340kg, the Corolla Ascent Sport auto is average sized for its class, however the boot space  is very small, with a miniscule 217-litre capacity that’s 142 litres smaller than the previous model Corolla and 69-litres less than the Yaris.

The new Toyota Corolla hatch was awarded a five-star ANCAP safety rating in August 2018 thanks in part to its active safety features, including autonomous emergency braking (AEB) with cyclist and pedestrian detection, and lane-keep assist.

It scored well for crash protection – 96 percent and 86 percent for adult and child occupant protection respectively – and is equipped with seven airbags (front, front side, full length curtain, and driver’s knee), ISOFIX child seat anchors in the rear seats, and seatbelt warnings.

The 12th-generation Corolla has a fresh and ergonomically sound cabin design. Build quality is hard to fault and the materials used also have a high quality feel.

That said, the Ascent Sport’s plastic steering wheel isn’t as pleasant as the leather wrapped tiller in higher-spec SX and ZR Corollas, or similarly-priced Mazda 3 Touring, but the buttons are laid out intuitively, including the cruise control switchgear, which are mercifully no longer located on a separate stalk.

The cloth upholstery also feels durable and the front seats have deep cushions and great lower- and upper-back support.

The back seats are comfortable too, however leg and headroom is tight, with the shins of the average sized adult touching the front seats. A centre armrest has two cup holders, and there is also a handy cup holder on each of the rear-door armrests.

Rear storage is confined to a map pocket behind the front passenger seat and there are no air vents or USB and 12v sockets for rear-seat occupants.

The ride down back is pleasant though, thanks to the Corolla’s advanced multi-link rear suspension that handles lumpy rural roads in a composed manner.

The new Corolla was built with the driver in mind, and has been re-built from the ground up on a new longer, wider and stiffer chassis with a sophisticated new multi-link rear suspension.

The well-balanced chassis combines with nicely-weighted and direct-acting steering to make cornering surprisingly good fun. It handles bumpy roads great too, with the multilink suspension feeling like it’s cutting through road imperfections rather than merely rolling over them. 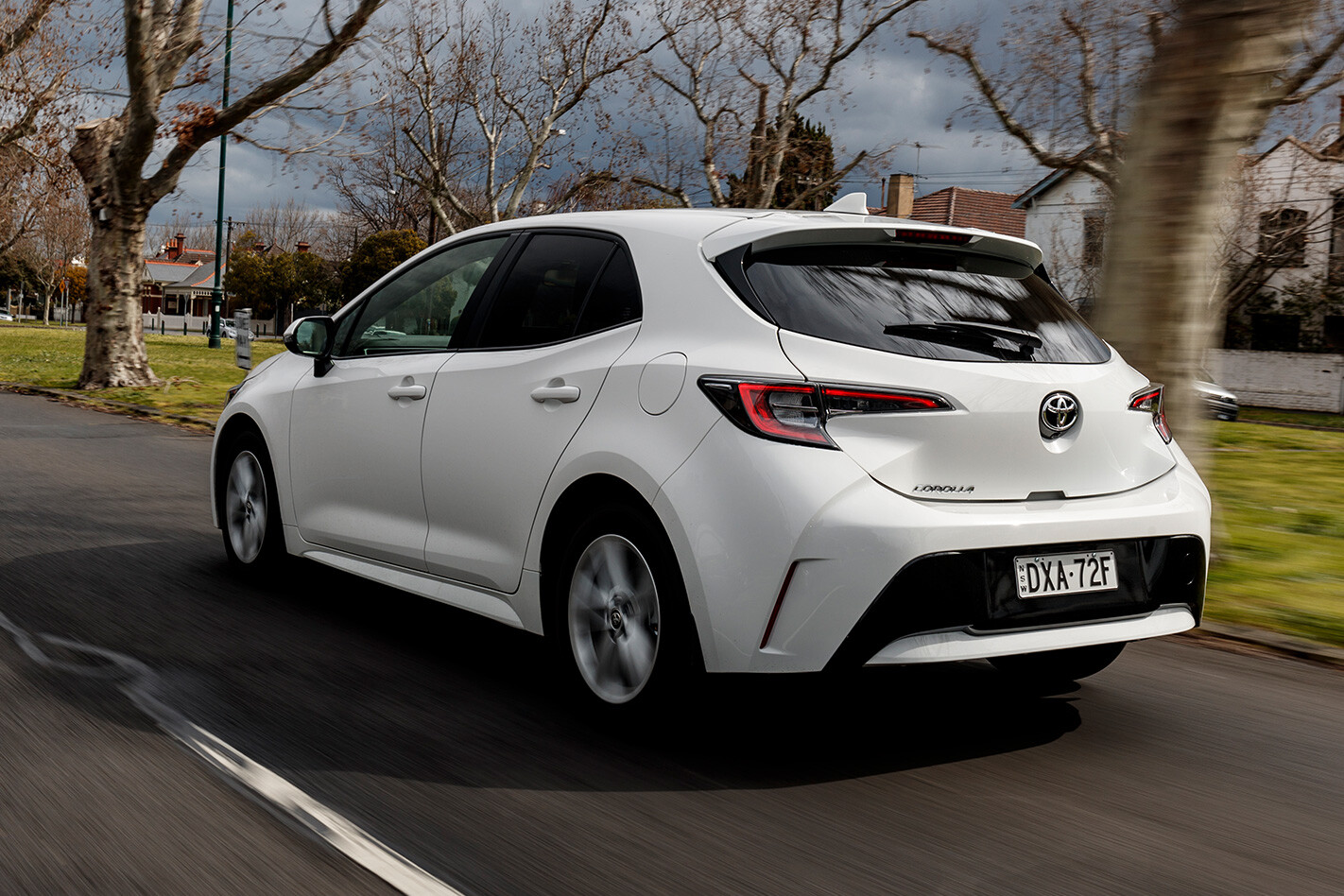 The highly-efficient 2.0-litre petrol engine is the most powerful engine for its size without a turbo and, coupled with the CVT automatic, is the pick of the Corolla’s powertrains over the 2.0-litre petrol manual and 1.8-litre hybrid CVT.

While CVT autos usually have a revvy but sluggish rubber-band feel, the 2.0-litre Corolla’s has a ‘launch gear’ that steps through the gears like a traditional automatic gearbox. This helps it take-off sharply from a standstill, while also offering responsive acceleration while on the move, such as when overtaking.

Yes, the Toyota Corolla can now add driver enjoyment to its steadfast reputation. It seems have moved two generations ahead of the now-superseded Corolla, both in terms of driveability and technology, and the company has done well to gift even the entry-level Ascent Sport with a fat standard equipment list.

The emphasis on driveability has compromised practicality though, with tighter rear-seat space and a comically small boot. But while the new Corolla may lose buyers seeking more utility, it’s likely to gain new fans looking for something more than whitegoods on wheels.