The Porsche Taycan Turbo has a party trick. It has launch control. Of course, among performance cars launch control is nothing new, but the Taycan’s is a little bit different.

In petrol-powered cars, the activation of launch control is accompanied by the roaring of the engine as revs rise to the optimal level for maximum acceleration.

In the Taycan, however, there is nothing but silence. The calm before the storm, if you will. The only clue to what’s about to occur is the “Launch control activated” message on the digital instrument display. 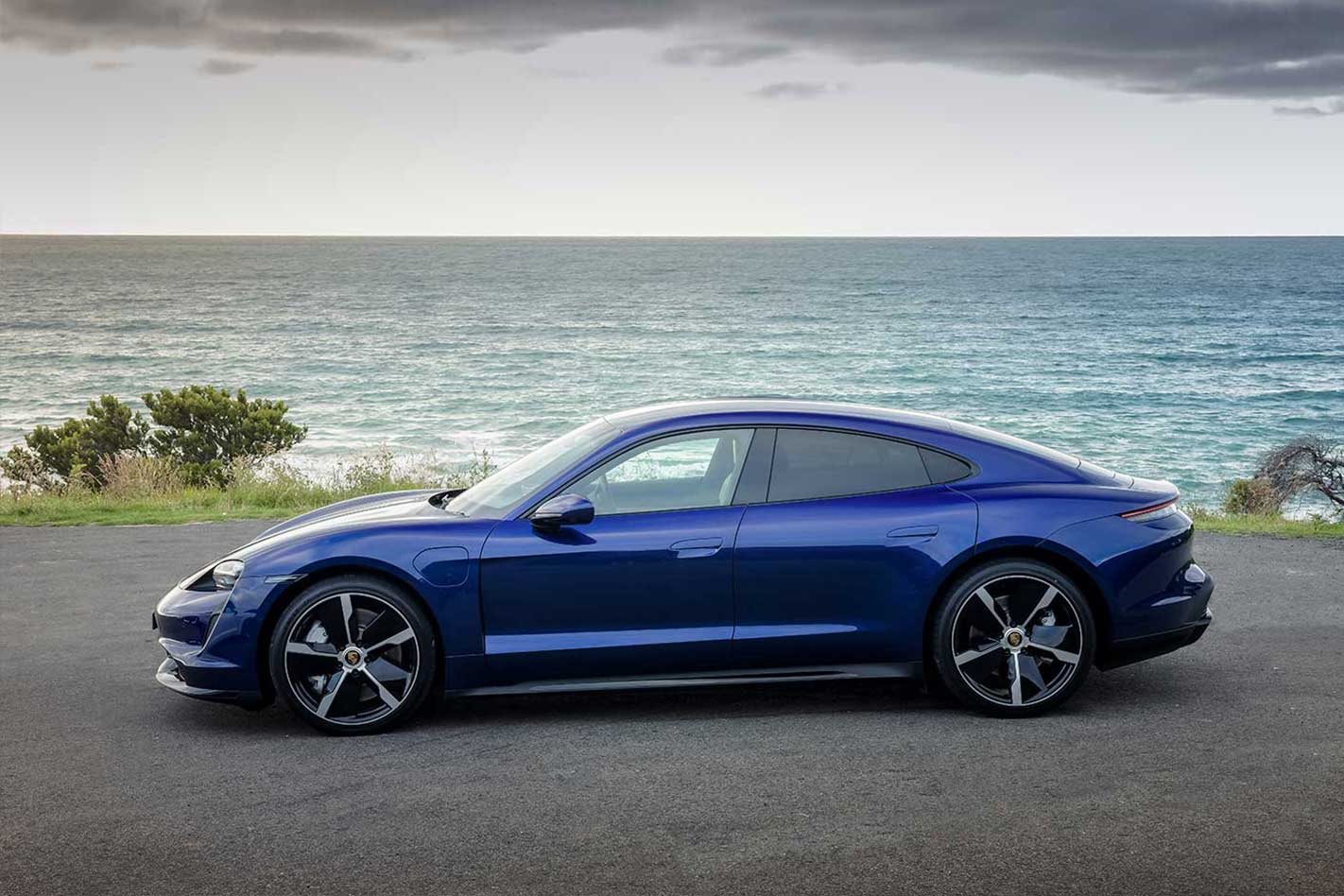 If you’re in a mischievous mood, this allows you to surprise unsuspecting passengers by silently and instantly unleashing 500kW and 850Nm of furious electrical power upon them.

Don’t do this with people of a nervous or frail disposition, or anyone with an iffy neck, as their (and your) head will be slammed against the seat as 2305kg of Taycan Turbo teleports to 100km/h in 3.2sec, two black lines evidence of the tyres’ struggle to accommodate the recent and rapid departure of this remarkable new Porsche.

READ Electric cars coming to Australia in 2021
Ok, so the fact an electrically-powered Porsche is fast in a straight line should be news to no one, but is it a one-trick pony? Can this silent 2.3-tonne four-door provide the driving engagement that models from this marque are renowned for and, lack of physical turbocharger aside, does it live up to the promise of that Turbo badge? 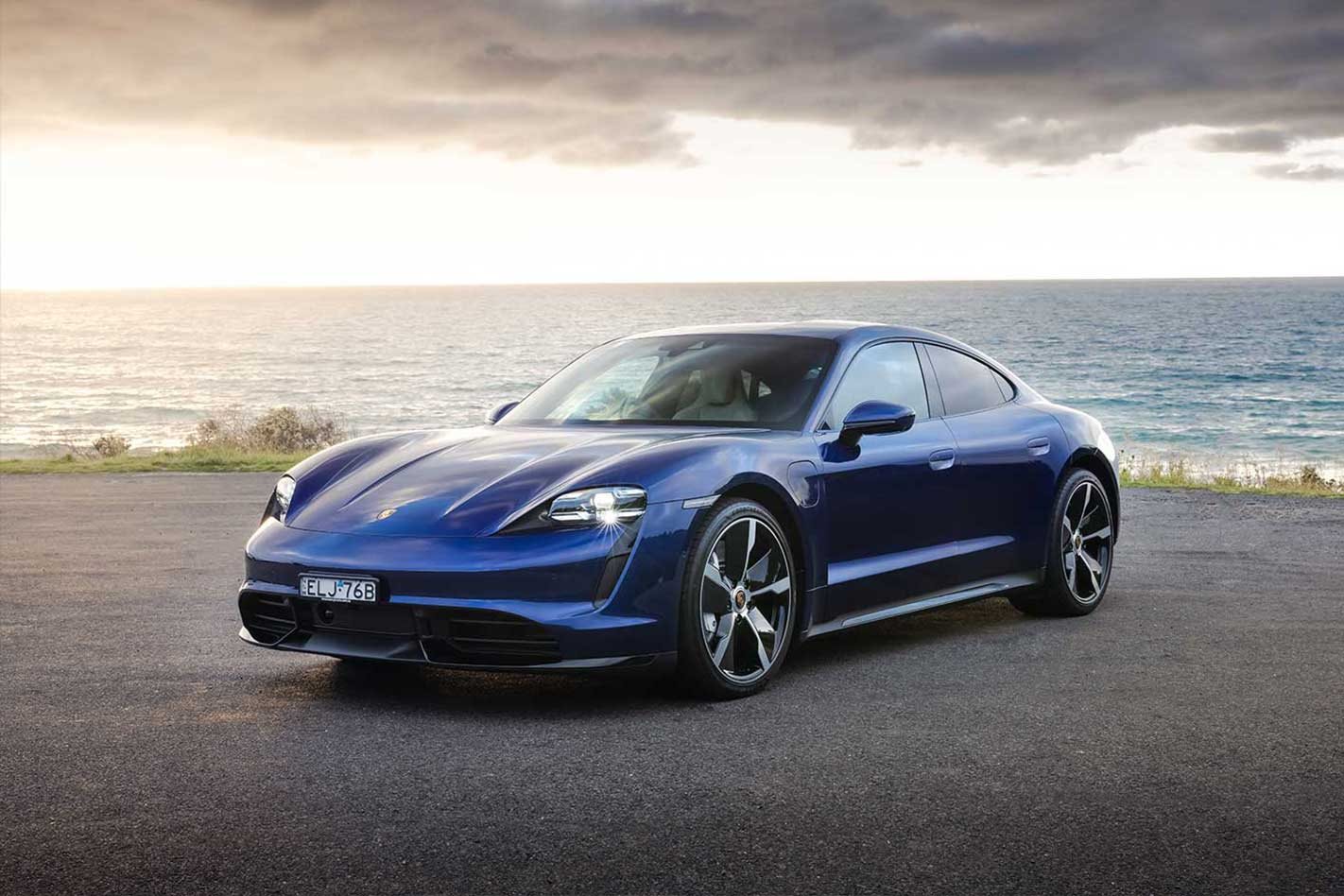 Before we get into that, let’s take a closer look as to what constitutes the $268,500 Taycan Turbo. Specifically, what does the extra $80,000 buy you over and above the entry-level Taycan 4S? 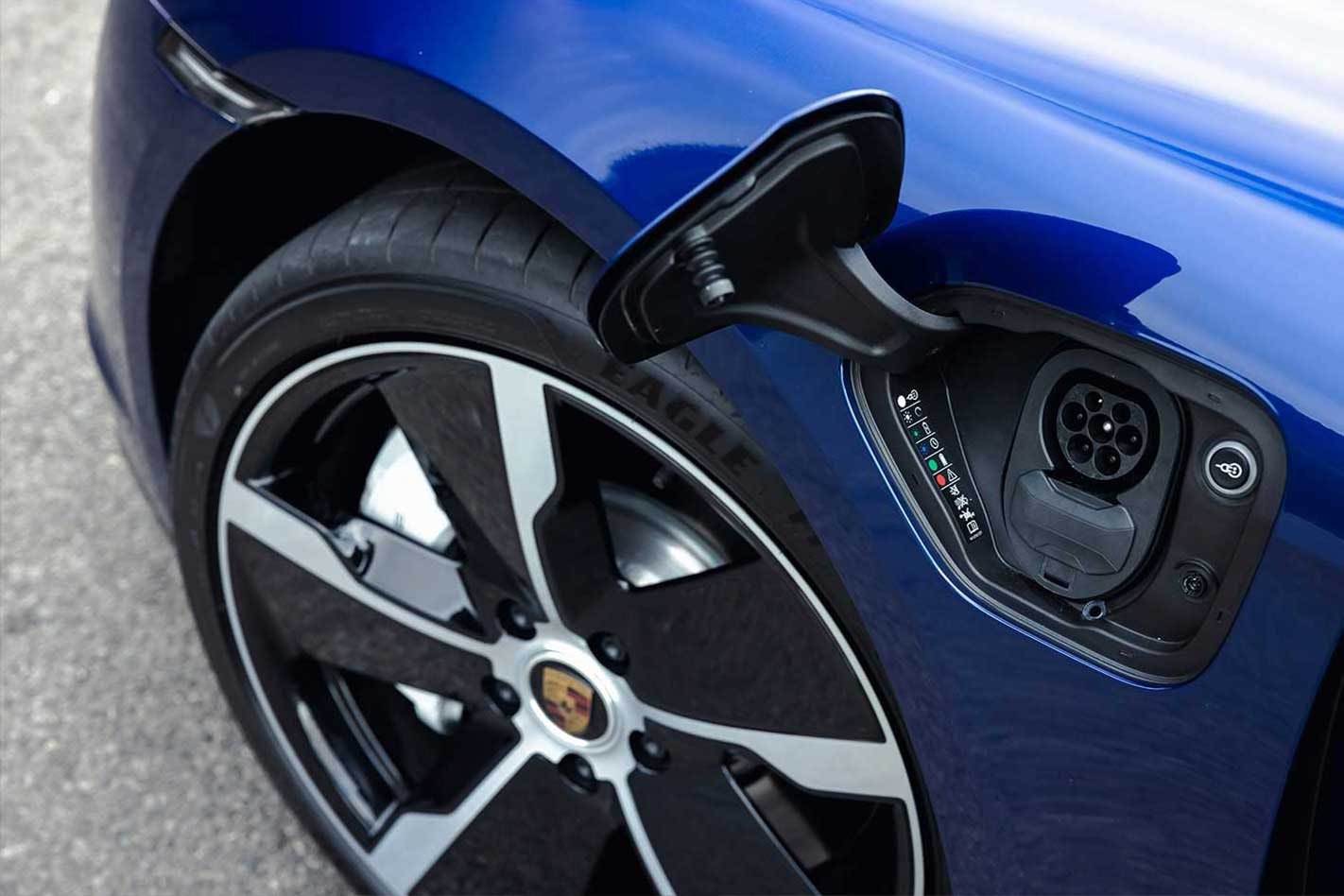 Porsche Torque Vectoring Plus is standard, while the brake disc diameter grows from 360mm to 410mm and 358mm to 365mm front and rear respectively. Various exterior inlays (lower valance, side skirts, rear diffuser) are painted in body colour rather than black and Porsche’s dynamic LED matrix headlights (PDLS Plus) are also fitted standard.

Finally on the mechanical side of things, Porsche Dynamic Chassis Control Sport, which includes active anti-roll bars and is a $6870 option on the 4S, is included as standard.

On the inside, there’s four-zone climate control, Race-Tex roof lining, heated seats front AND rear, ambient lighting and adaptive sports seats become a no-cost option. The very cool leather-free interior also becomes a $1000 option rather than $8530 in the 4S. There is nothing unusual about the way the materials look and feel – you’d swear it was regular leather, Alcantara and so-on – but they are more eco-friendly and heavily recycled. 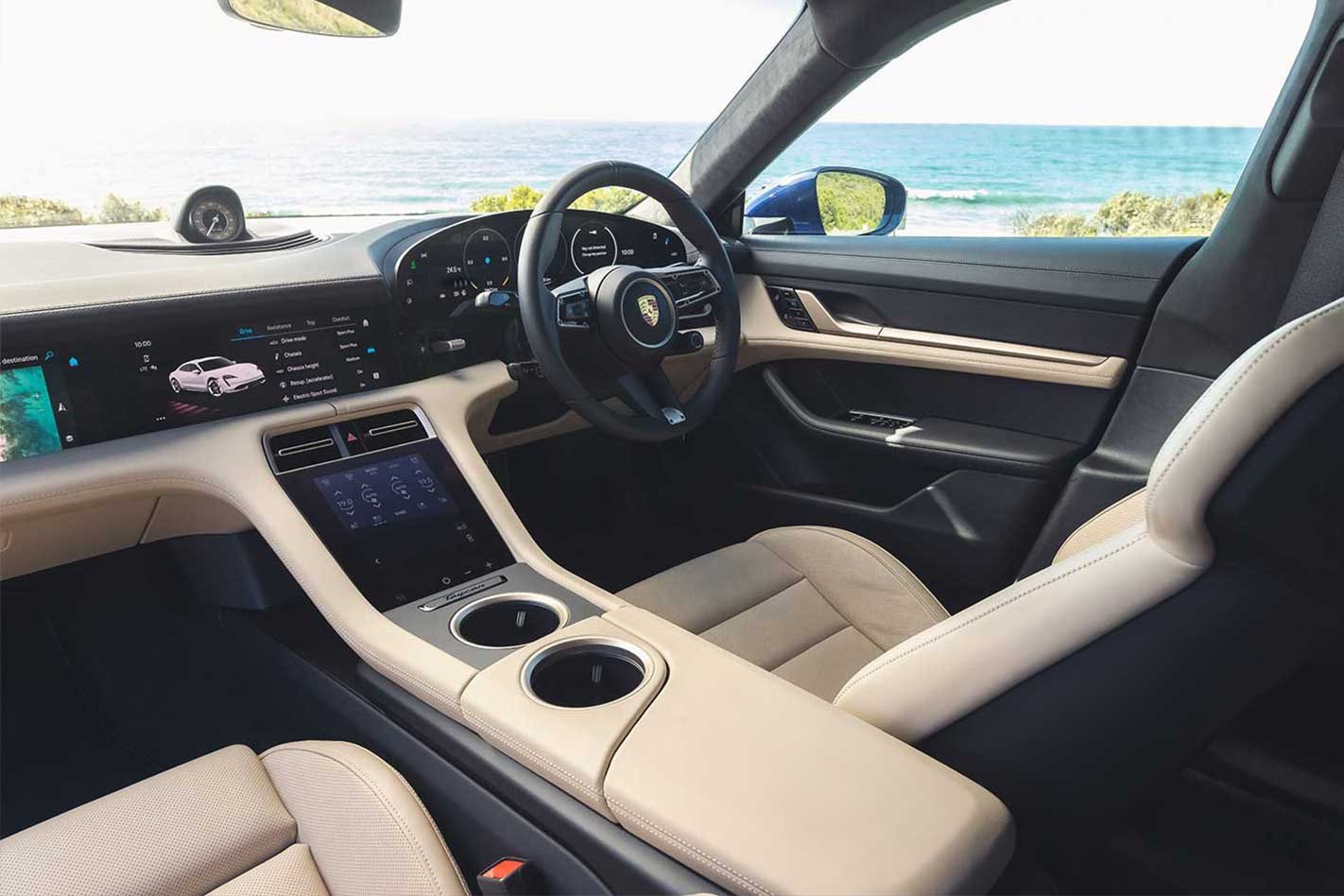 The interior itself is beautiful in terms of quality and design, though it’ll help if you like the look of screens as there are a lot of them. The main infotainment screen is familiar from other Porsches; it’s a swipe-and-tap affair controlling Porsche Connect, navigation, Apple CarPlay, a 14-speaker Bose stereo and a variety of car functions, such as drive mode selection. 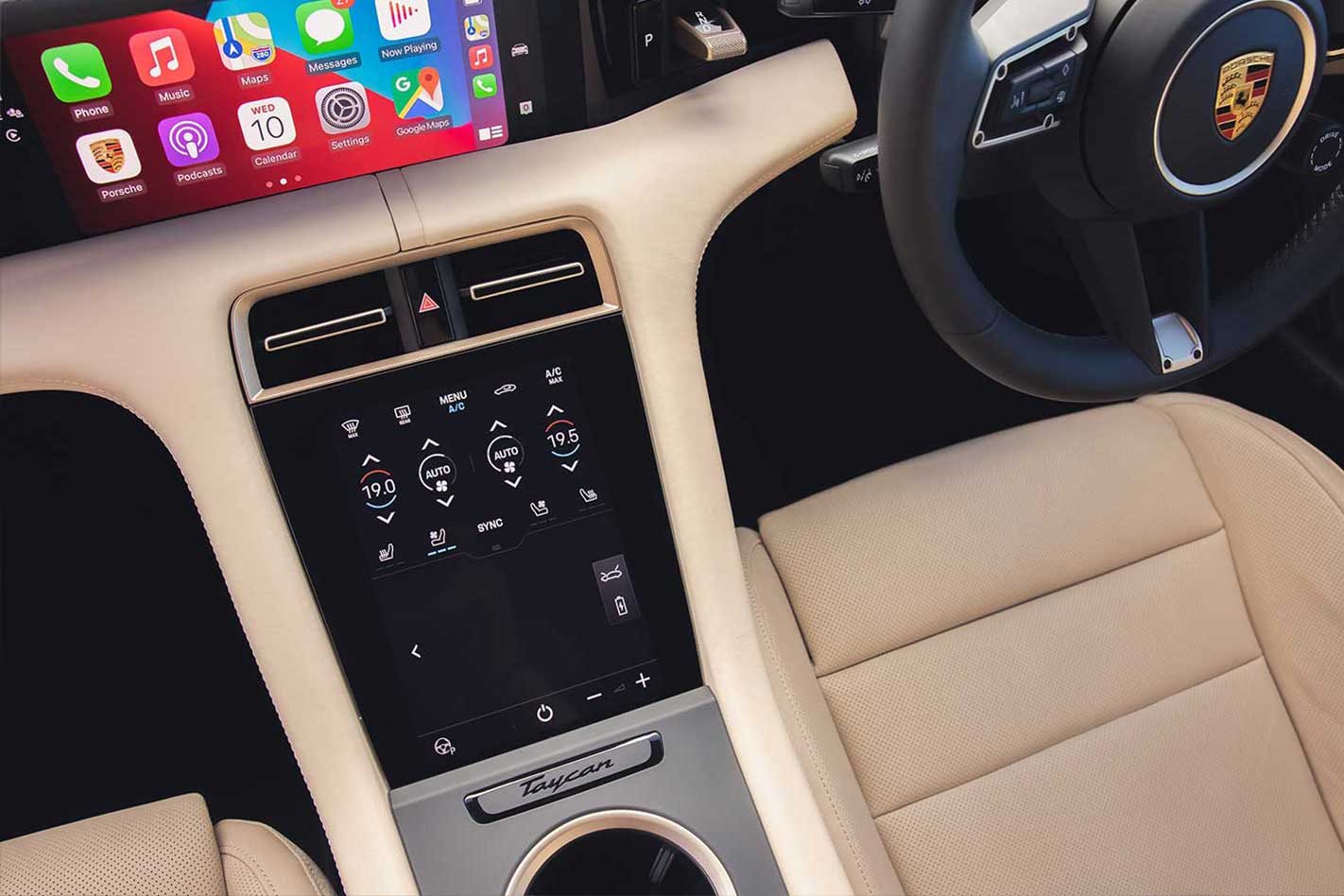 An optional passenger screen, a clone of the main screen, can be installed on the left-hand side of the dash. This massive expanse of displays looks quite cool but it seems a bit redundant when the main screen is within easy reach of the passenger, though it does allow two separate functions (for example, navigation and audio) to be operated at once. 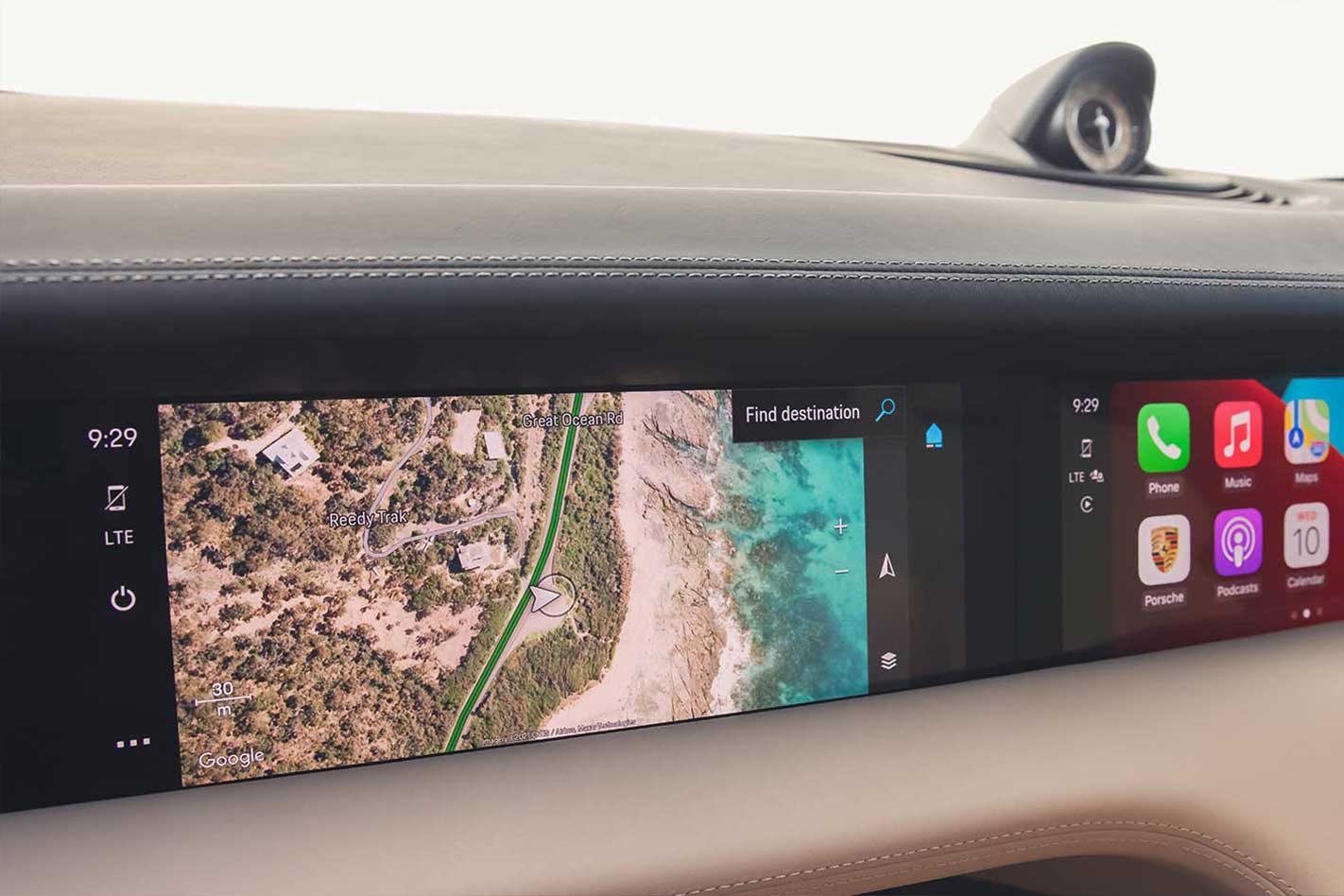 Below the main screen is another display containing the climate controls and a touchpad to control the main infotainment and recognise handwriting for address inputs and the like. There’s little wrong with the functionality of the haptic climate controls, though personally, a physical button is always nicer. The touchpad also suffers from the Lexus problem of jerky, imprecise movement and, again, seems redundant with the main touchscreen is less than an arm’s reach away.

What looks amazing, though, is the beautiful curved 16.8-inch digital instrument display. It can show power usage, navigation map in large or small sizes or next to nothing at all in its ‘reduced’ mode. It also houses the touch controls for the lights on the left and the chassis (damper stiffness, ESP setting and ride height) on the right. 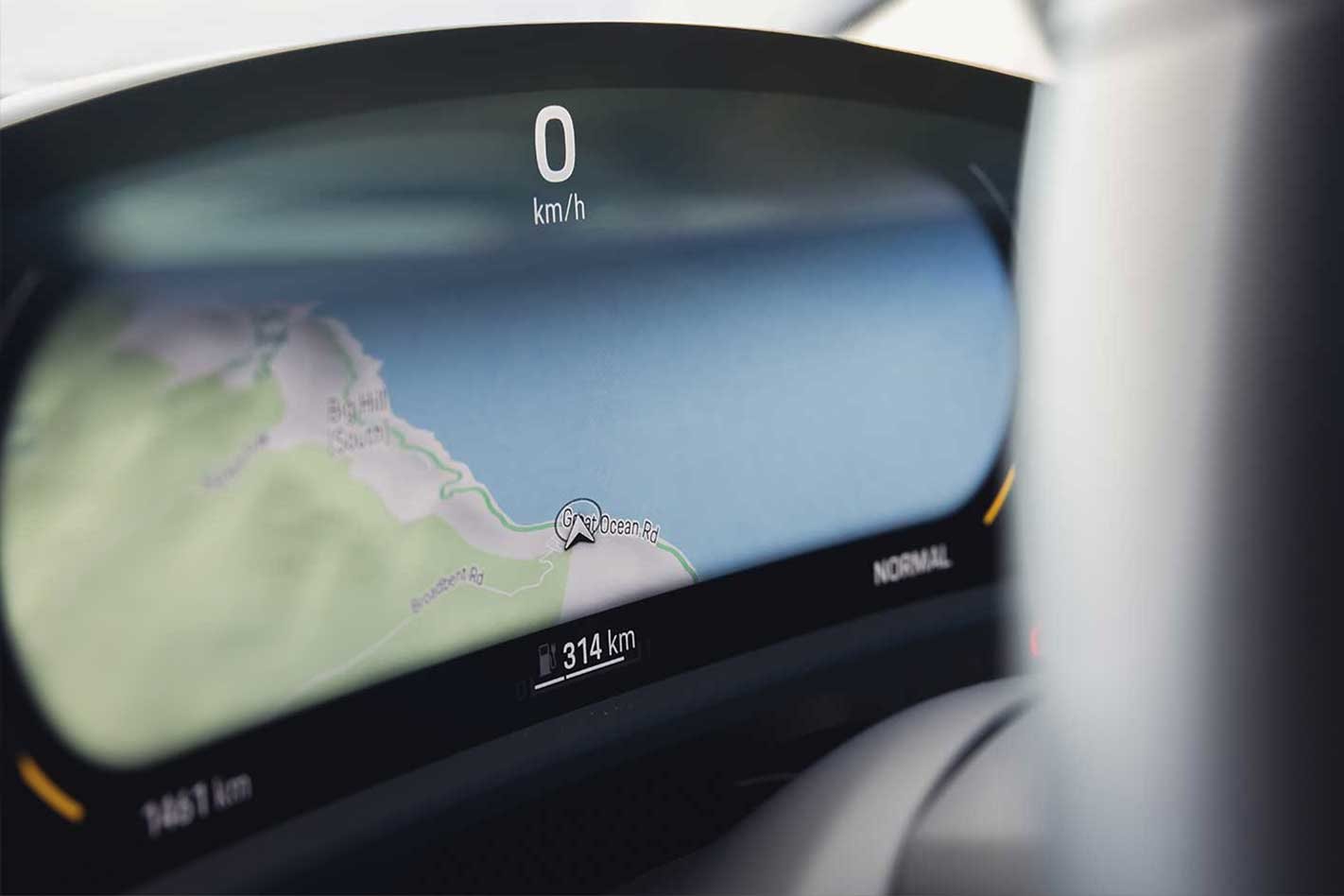 The driving position is fantastic, set low with the pedals arranged for left-foot braking should you wish, but space in the back will be tight for larger adults. Headroom was just ok for my 180cm frame and foot room is a bit scarce, though legroom is fine as long as the front row sit fairly far forward. Luggage space is decent, the 366-litre boot assisted by an 81-litre ‘frunk' in the nose.

Switching on the Taycan is as simple as getting in, while reaching out with your left hand will locate the drive selector – click it up for Reverse, or down for Drive. When you’re not terrifying your passengers with full-bore launch control starts, the Taycan is a very serene place to be. 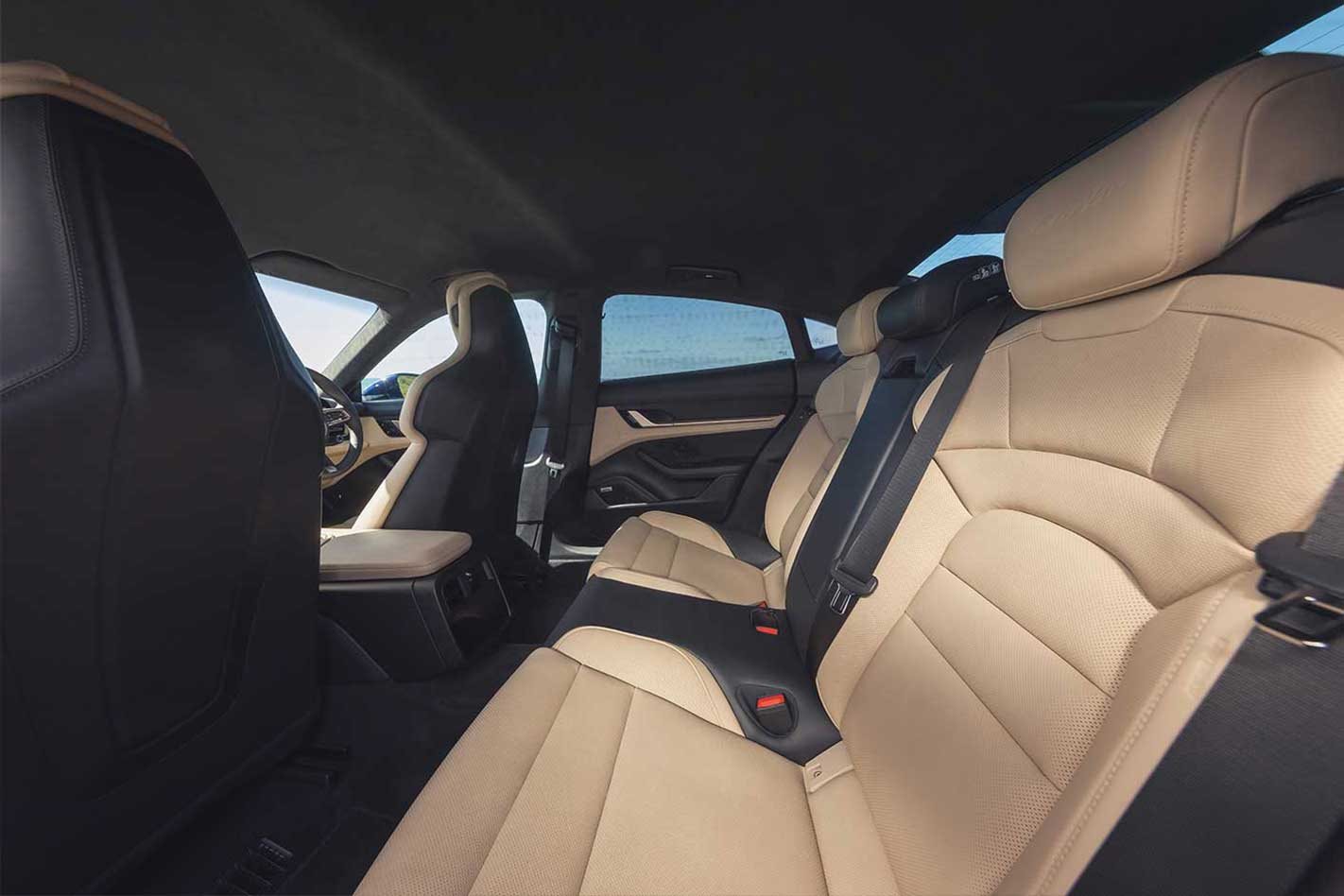 This is partly down to the lack of engine noise, but often this absence makes other mechanical noise (tyre and wind roar, for example) more noticeable. Not so here. You can option Porsche Electric Sound ($1050), which emits a noise when accelerating and braking, but it’ll definitely be an acquired taste.

The other attribute that makes the Taycan so relaxing to drive is its excellent ride. You can feel its substantial heft, to the point that on really bumpy roads a click to Sport helps keep the body in check, but in general, comfort is excellent. 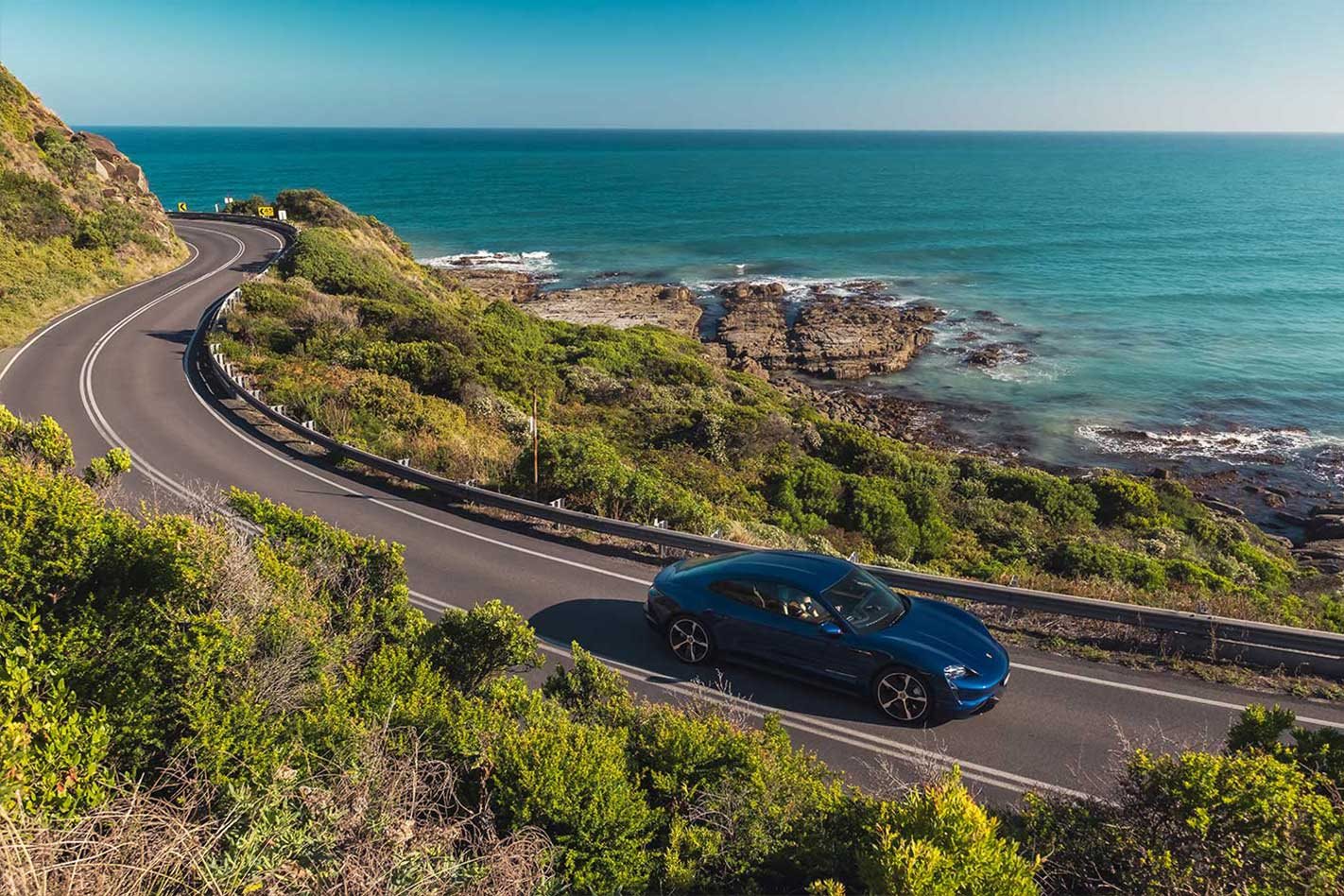 Unlike many electric cars, Porsche doesn’t subscribe to the idea of ‘one-pedal’ driving, a name given to the strong regeneration of electric motors. This tops up the batteries but provides a braking effect. The Taycan can actually regenerate extremely efficiently, but in Normal mode it glides with the feeling of very limited mechanical and aerodynamic drag.

There are four drive modes as well as an ‘Individual’ mode that allows drivers to tailor their favourite combination of settings. As the name suggests, Range ekes the maximum possible mileage from the stored energy, setting all the ancillaries to their most efficient settings, lowering the ride height and closing the air intake flaps. It also limits the car’s top speed, though the limit is adjustable. 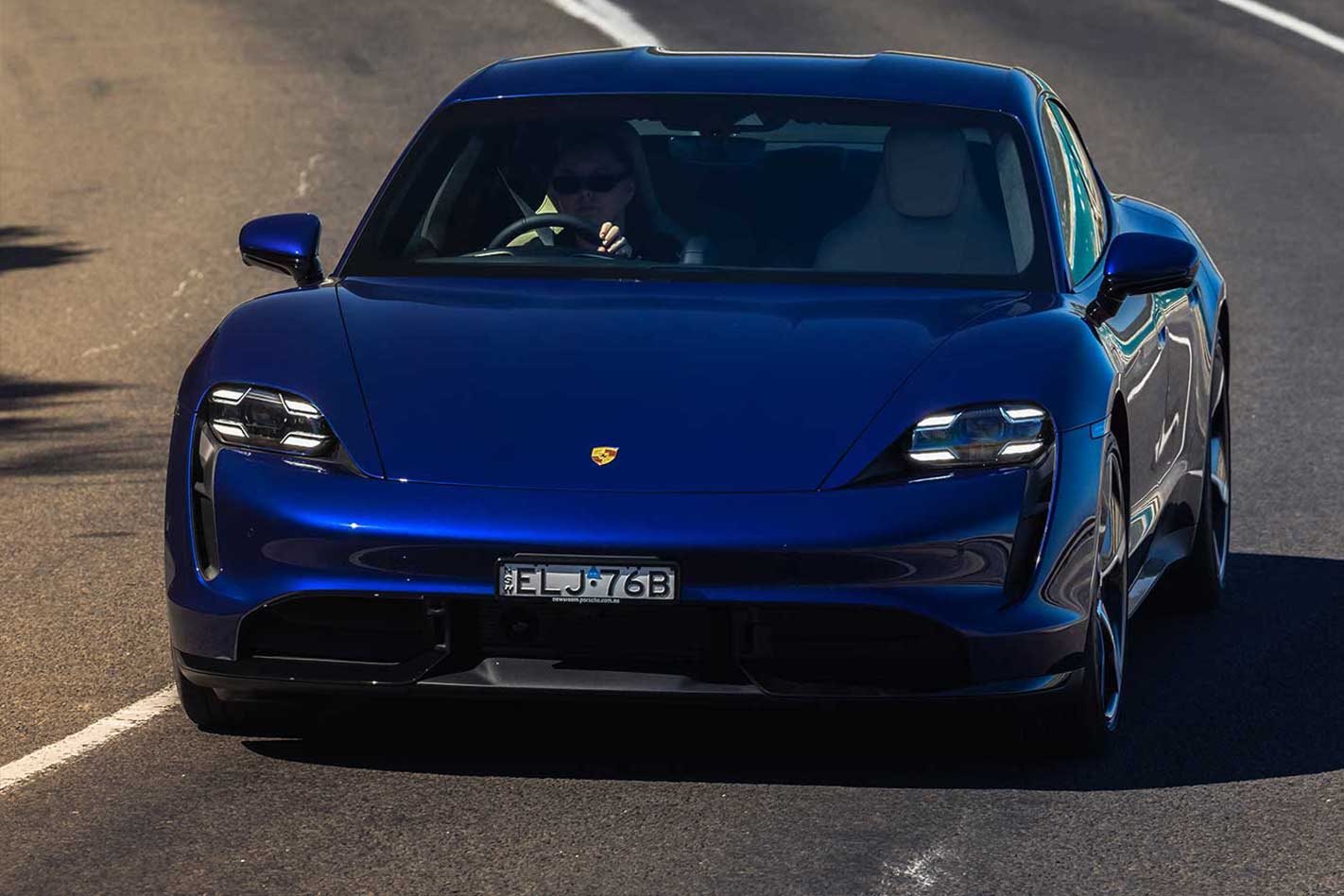 Obviously, the maximum range you achieve will be highly dependent on not just your driving style but whether you’ve got the air-con pumping or the heated seats on, but Porsche claims the Taycan Turbo’s maximum range, validated using the European WLTP drive cycle, is 452km.

READ What is the WLTP emissions test?
Selecting Sport and Sport Plus – the easiest way to do so is to use the steering wheel-mounted rotary selector – progressively sharpens the throttle response and stiffens the suspension. 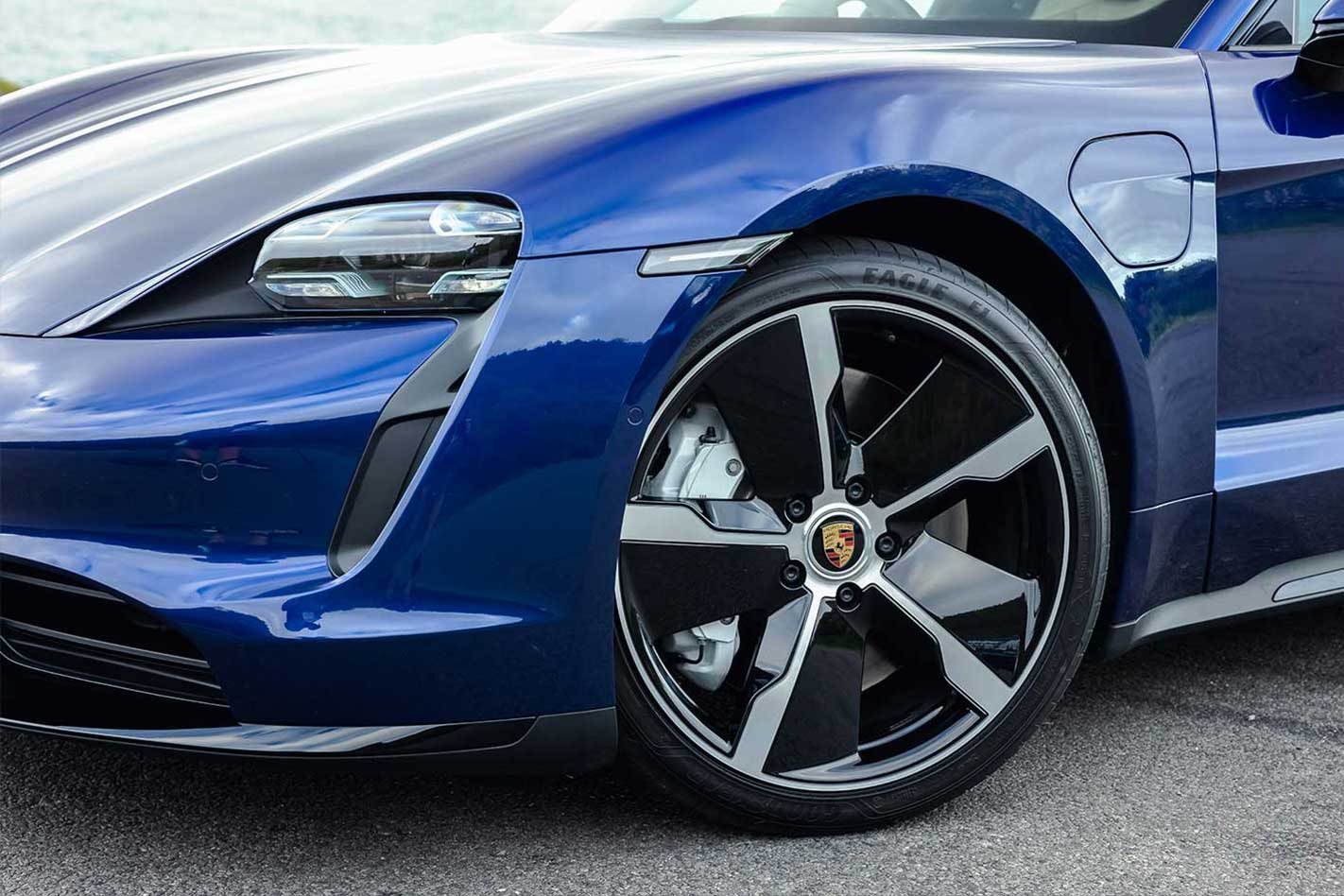 In all modes, the Taycan feels exactly like a Porsche. There’s a certain harmony to the weighting and feel of the throttle, brakes and, in particular, the steering which will be immediately familiar to any current Panamera, Cayenne or 911 owner.

Like other Porsches, the Taycan is also utterly unfazed by being driven hard. Doing so is a bit strange, as there are very few of the normal cues that we’ve come to rely on over the life of the internal combustion engine.

Traditionally, when approaching a corner at speed your brain will automatically figure out what gear is needed, which will then be either selected by the car or the driver and thus you’ll be at roughly the right speed. 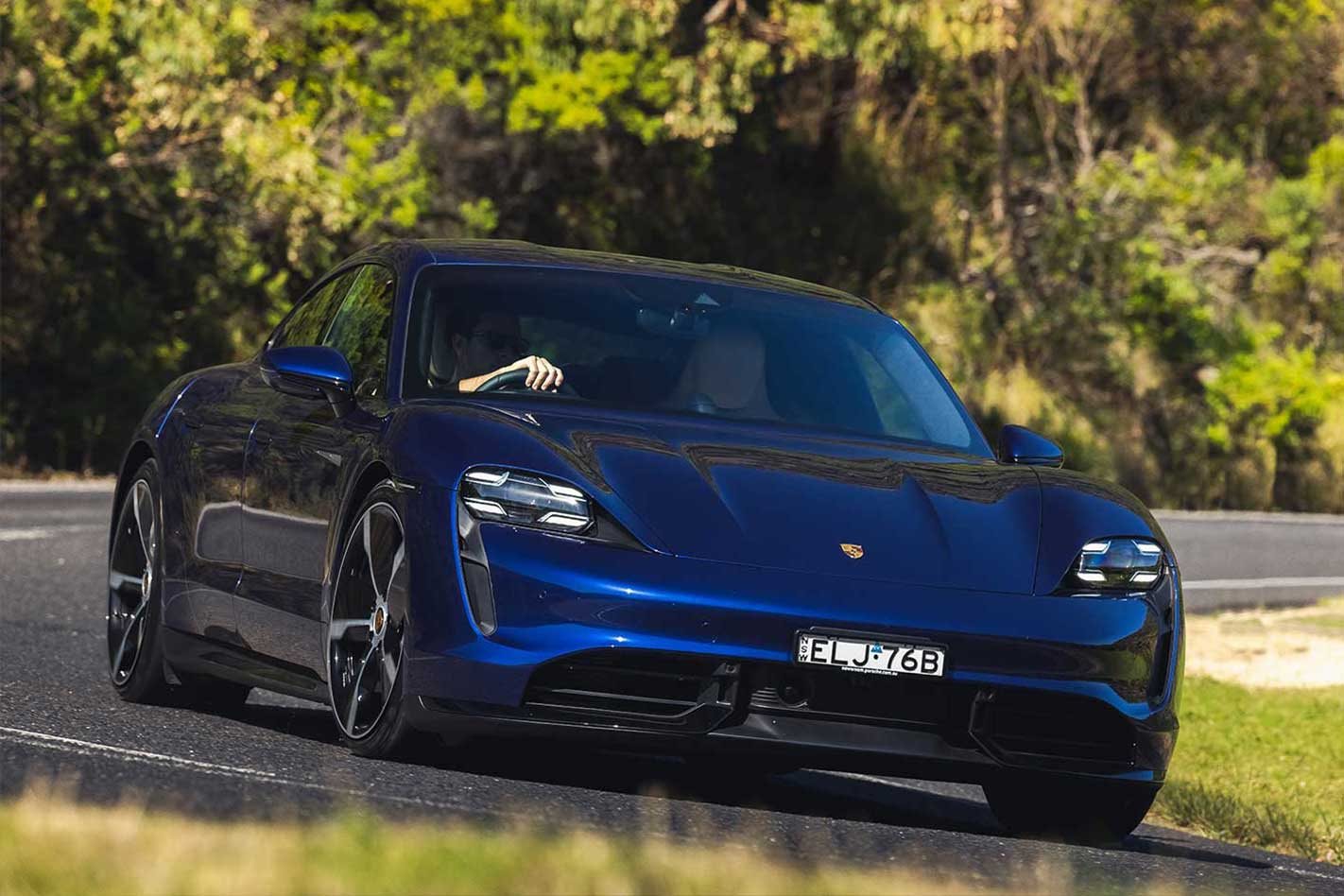 In an electric car your only cue is visual – there are no gears to change and there is no noise for reference – and that is relative; if you’ve been driving around town all day 60km/h feels normal, but if you’ve spent the day at 110km/h on the highway then 60km/h feels like you could walk faster.

This is likely something that drivers will quickly adapt to as electric cars become more prevalent and the Taycan supports the process by having outstanding grip, brilliant brakes, great feedback and, in Turbo guise, eye-watering punch out of corners. There is not the slightest hesitation, the acceleration delivered instantly.

It’s truly impressive, though to call it fun is perhaps stretching the truth. Apart from the basic functions of the vehicle – pressing the pedals and turning the steering wheel – there isn’t much for the driver to engage with. Don’t get me wrong, the Taycan is a very enjoyable car to drive, but if you’re looking for visceral thrills you’re looking in the wrong place. 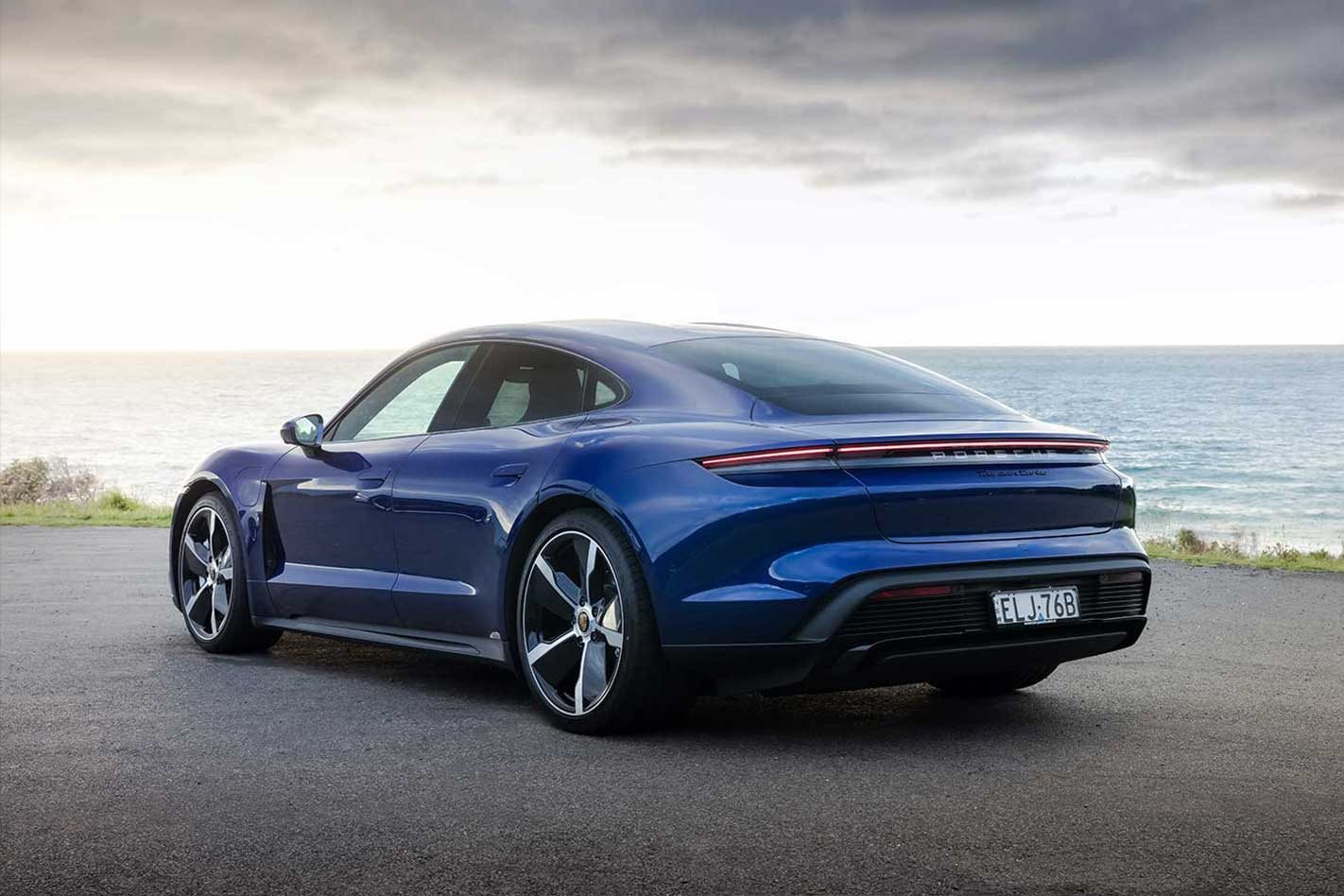 And that’s perfectly fine. In fact, it almost suits the Turbo branding. Putting aside the fact that the Taycan Turbo doesn’t actually have a turbo, the name has traditionally signified the ‘grand tourer’ of the respective Porsche range, the car that can handle daily usage without raising a sweat and cover long distances at speed and in comfort. This is a role to which the Taycan Turbo is perfectly suited.

The only real question mark surrounding the Taycan Turbo is if you’re spending the thick end of $300,000 on it, why not stretch that bit further and order the Taycan Turbo S that takes the Turbo’s party trick and turns it up to David Copperfield levels? But that’s a question for well-heeled buyers to wrestle with.