Jaguar’s XE mid-sizer is primed for war with the Germans, but can it really dull the shine of the stellar C-Class’s three-pointed star?

You want to know how not to take over a car company, look at Jaguar. In 1989 the Coventry cat was bought by Ford, an American company that had no experience with European luxury cars. Ford imposed its platforms, parts and planning, creating a fragmented model family and stifling development of models that were important to the Jaguar brand. It’s understood that Ford lost a couple of billion every year.

If you want to know how to take over a car company, look at Jaguar. In 2008 it was bought by Tata, an Indian company that had no experience with European luxury cars. Tata acknowledged as much and put its faith in Jaguar’s experienced and enthusiastic leaders, who began developing a cohesive family of desirable models. It’s enjoyed double-digit growth almost every year since. 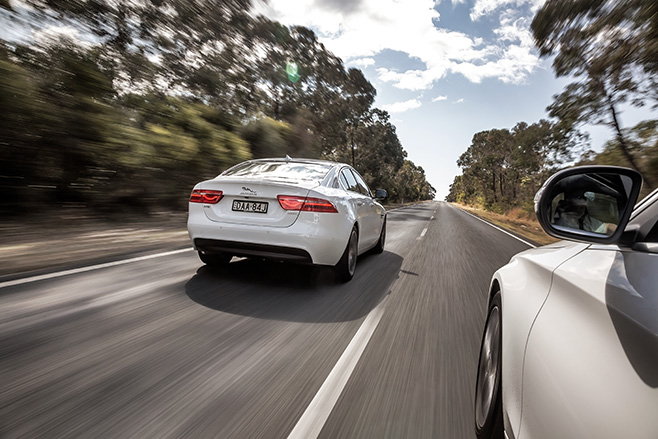 The Jaguar XE sedan is crucial to continuing that success. It’s the volume model that provides the stability for investment in new, niche-seeking models like the recent F-Pace SUV. Just look at the track records of its rivals: The BMW 3 Series still constitutes more than 26 percent of its maker’s volume; Mercedes-Benz’s C-Class more than 22 percent.

Jaguar hasn’t had a contender in the class since the Ford Mondeo-based X-Type of 2001-09 – and it hasn’t had a successful contender there, ever. Ironically, the all-new XE wears the same name as a landmark Ford Falcon, but this car’s mission is to shake off any whiff of Jag’s Ford past.

As an indication of how different today’s landscape is, consider that the once prolific Falcon is today comfortably outsold by the C-Class, and has been for more than two years. Prestige is the new mainstream.

It’s the Mercedes C-Class that we’ve pitted against the Jaguar, not least because of the car’s dominance in the class; in the first six months of this year it had pretty much outsold all its rivals combined. But there’s also the matter of BMW, Audi, Lexus et al being currently in the throes of replacing their rival models. 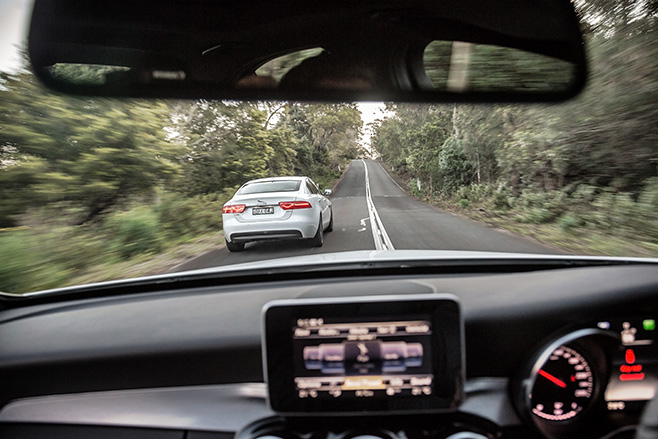 Let’s hope they’ve been diligent in throwing their drink cans into the recycling because these two cars suggest that if you ain’t into aluminium, you ain’t in the game. The body structure of this W205-series Mercedes comprises 48 percent aluminium; Jaguar beats that with a boast of 75 percent in the XE’s structure.

The XE arrives in four trim levels, with four engine choices – a new Ingenium 2.0-litre diesel and a supercharged 3.0-litre V6 framing a pair of old (Ford Ecoboost) 2.0-litre four-cylinder petrol turbos making 147kW/280Nm or 177kW/340Nm. All drive through an eight-speed automatic transmission, a cog count equalled in this class by the 3 Series and the Volvo S60. 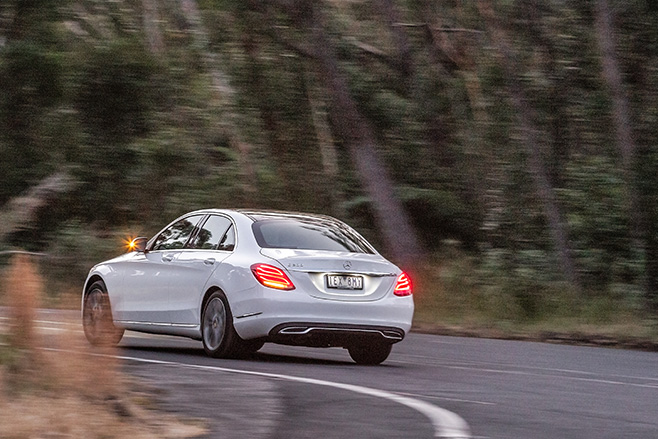 By no coincidence, the Mercedes-Benz C200 also has a 2.0-litre turbo four, making ballpark power and torque (135kW/300Nm) and listing at $60,900. Our Polar White C200 has the optional Vision Package ($3454), comprising the almost full-length panoramic sunroof (with electric blinds), head-up display and ‘intelligent’ LED lighting. So there’s little more than a grand between them as tested.

Ambient interior lighting is standard in the C200, though its upholstery is ‘Artico man-made leather’ rather than the bovine-made variety. The seats have full electric adjustment (including, as in the Jag, four-way lumbar), and there’s also keyless entry/start, the Audio 20 infotainment screen (controlled by touchpad/knob) and blind-spot warning.

Both cars offer cockpit adjustment for the suspension, steering, transmission and throttle mapping. 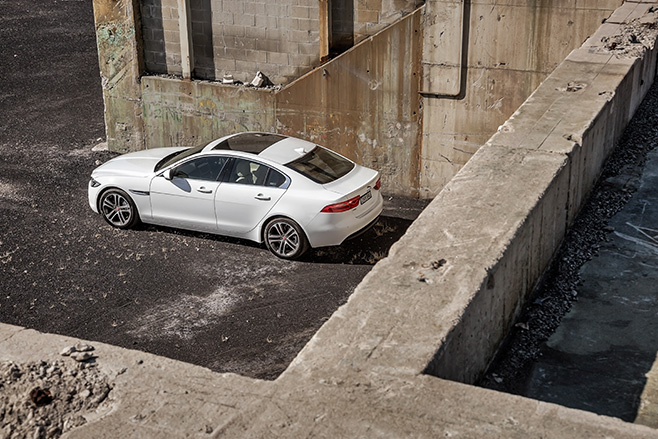 With similar dimensions, powerplants and equipment, surely the main thing that matters about all this lightweight aluminium construction is how much they end up weighing. And it all starts to look a bit silly because the abundantly alloy XE tips the scales at 1530kg, which is 65kg on the wrong side of the C200 and a whopping 135kg heavier than the now four-year-old BMW 320i.

No question that the Jaguar has the latest and freshest look in the class (at least until the new Audi A4 hits the market next year). The exterior perfectly conveys the XE’s sporting intent, but it’s conventionally handsome. Details such as the LED tail-light signature (echoed in the dashboard lighting), the steering wheel and the instrumentation strongly evoke Jag’s hero F-Type sports car, but elements about the XE’s wedgy body hint at Tesla, Audi, BMW and even Honda.

The Mercedes’ styling is more likely to polarise people. To these eyes, its thrusting proportions, with a long bonnet and tightly tucked tail, have an elegance and distinctiveness that suggest traditional coachbuilding. This base-level C-Class is also quite jewelled, with brightwork in the front vents, front splitter and elsewhere about the body. Like the Jag, it runs 18-inch alloys, similarly shod with 225/45 front and 245/40 rear tyres.

You’d swear the Jaguar is shorter and stockier than the long, lithe Benz, and it is – but by less than a thumbnail between bumpers, and on a wheelbase that’s just 5mm shorter. The Jaguar is, however, 40mm wider and 26mm lower, on tracks that are 14mm and 33mm wider front and rear, these differences helping to account for the Benz’s narrower, tapered-tail appearance. 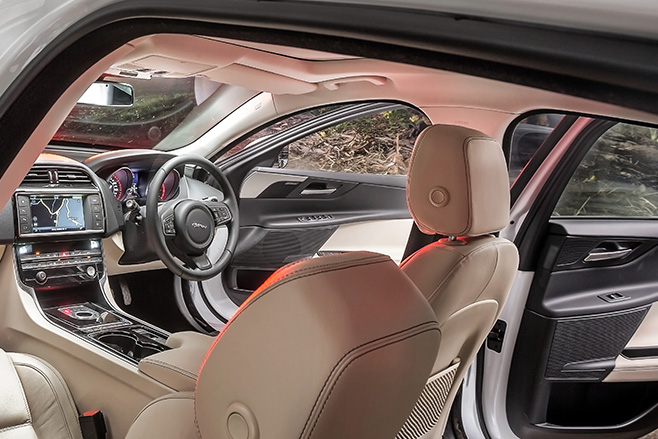 The themes naturally carry through to the interiors, where the Jaguar’s dashboard is architectural and tastefully edgy. The two-tone colour scheme (ours in Latte and Jet – ooh, ra-ther!) complements beautiful elements like the reverse-angled sweep across the dash and door trims, which are likewise endowed with interesting angles. An owner would not quickly tire of looking at this interior.

One thing that does get old quickly is the Jaguar’s pop-up rotary transmission selector (supplemented, as in the Merc, by steering wheel paddles). Along with its piano-black surround, it occupies exactly the same footprint in the centre console as would a conventional manual or automatic gate. The Mercedes’ column-stalk selector, meanwhile, does actually save space, resulting in a large and convenient stowage bin.

The Mercedes’ interior is more about ovoid forms, classic charcoals and real brushed aluminium, along with a share of piano-black plastic and fake chrome. The scalloped dash houses a row of metal-look toggles for its HVAC and other controls, an arrangement that’s easier to use (in daytime, especially) than the Jaguar’s flush buttons.

Mercedes’ information screen is plonked atop the dash like an errant iPad (sorry, tablet). It’s straightforward to use, via the hand-pad and control knob on the centre console, but the Jaguar tablet’s touch-sensitivity makes more sense. One suspects this may be a precursor to BYO tablets. 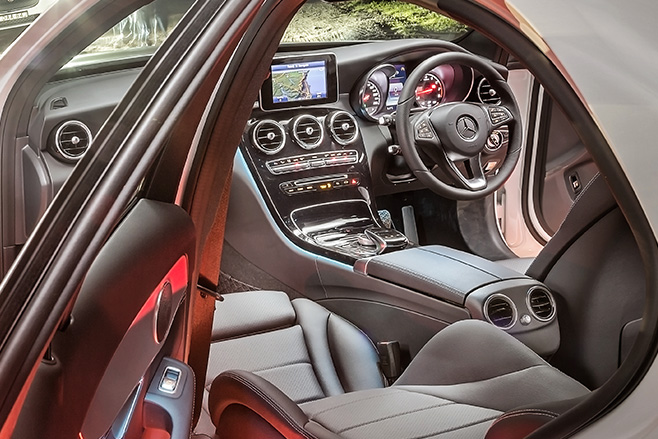 The front seats in both cars are comfortable and supporting, offering a huge range of adjustment. The XE’s are firmer and the leather actually a bit more slippery than the Benz’s slightly plusher pews. The Jaguar’s steering column adjustment is electric, the Merc’s manual.

In the rear, both offer adequate legroom and space to slot feet beneath the front seats. The Benz appears to be the roomiest, and it is, though this is partly a visual trick of its shorter, chamfered cushion that gives bugger-all support for thighs. The Jag’s bench is flatter, but egress and entry are more difficult. More annoyingly, the XE’s bench pushes its occupants towards the centreline of the car, making it marginal as a three-seater. It also has less headroom, though neither car is especially generous here.

Both feature split/folding backrests, giving access to the boot. The Merc’s has the larger volume, but the Jag’s is longer and perhaps more usefully shaped.

At standstill, it seems, the Jaguar offers a more sporting and edgy alternative to the more conservative, comfortably rounded Mercedes. Wonder if there’s a theme developing here?

Both these turbocharged four-cylinder engines are strong and sweet, and both feature idle-stop for an economy kick. Neither sounds especially sporting, but neither does their sound cheapen the ambience. 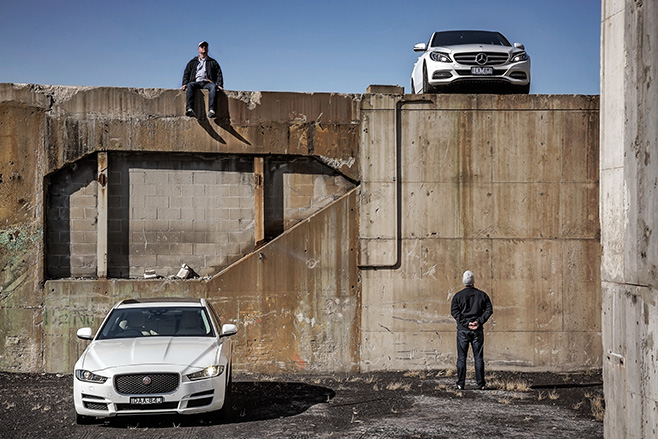 You would pick the Jaguar as the quicker of the two cars. Its throttle response is sharper (whether in Normal or Dynamic), with a lively feel, a yearning to rev and generally quicker shifting through its fuller box of ratios. Only occasionally in normal driving does the Jag’s eight-speeder get indecisive, notably after you’ve been using the manual paddles.

The Mercedes is similarly linear in its power delivery – there’s no trace of lag in either – but its seven-speed transmission has a weird, momentary pause at each upshift, punctuating the perception of progress.

For all that, though, the C-Class emerges as the quicker of the two. We manage 7.7sec from 0-100km/h (three-tenths slower than Merc’s claim) and a standing 400m in 15.4sec. In the Jaguar, our identical 7.7sec sprint matches the manufacturer’s claim, and the 400m arrives in 15.6sec.

Tellingly, beyond 100km/h the Jaguar begins to hit its stride. It reaches 160km/h some two seconds before the Merc. More usefully, the XE’s 80-100km/h overtaking performance is more than half a second better. 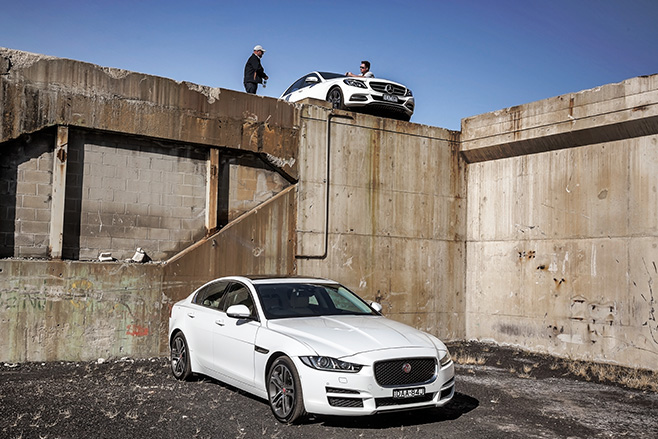 In braking, however, the roles are reversed – and somewhat alarmingly – the Mercedes scrambling from 100km/h to standstill in 35.6 metres, some 6.2m shorter.

That theme we’ve been alluding to plays out entirely on the open road, where even in their comfort-oriented modes (Normal in the Jag, Comfort in the Merc) the British car proves to be more tautly suspended, quick to respond and impeccably well controlled.

The XE’s quick turn-in is heightened (but not by much) in Dynamic mode, where a subtle response at the straight-ahead transitions quickly to a grab for the corner apex. The tail is also in on the act, the chassis pivoting into the corner with very little bodyroll. There’s bags of grip, until it begins to push into a firm, flat, predictable understeer. The Jag feels really quick and agile, though there’s some trade-off in the steering being a bit less directionally relaxed in motorway cruising. The ride manages that fabled British balancing act of being communicative yet comfortable.

Where the Jaguar dances through corners, the Mercedes flows. The steering is linear and (in Comfort) just short of lazy; the difference in weighting and turn-in with Sport or Sport Plus engaged is more pronounced, though turn-in is still less sudden than the Jaguar’s Normal setting. There’s more bodyroll, a softer ride (a bit floaty in Comfort), earlier and more obvious warnings when pushed clumsily fast into a corner, where the Merc’s chassis neutrality is almost eerie. 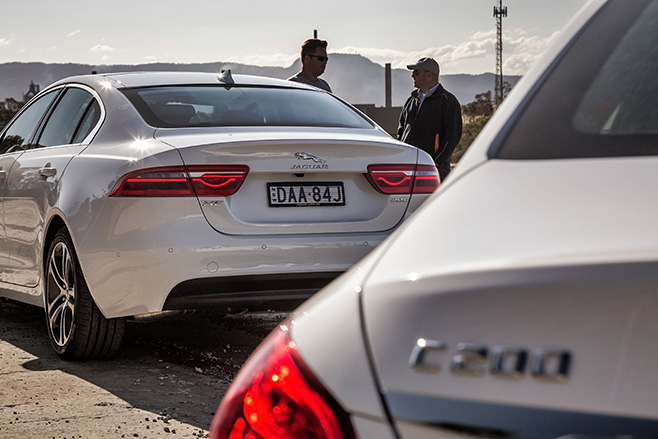 Where the Jaguar covers ground quickly and entertainingly, the Merc seems to mould itself to the road and flow with it. It’s the blob you won’t shake from the rear-view mirror.

This is one of those tests where ‘comparison’ is a lot easier than ‘conclusion’.

Jaguar has obviously positioned the XE as the sporty alternative in the class and they’ve absolutely nailed it. Against the 30 or 40 years of experience accumulated by Mercedes-Benz and BMW in this segment, Jaguar has pounced virtually out of nowhere and produced a car that’s immediately on the mark. It may have only a few months to enjoy the limelight, until the facelifted 3 Series and newcomer Alfa Romeo Giulia try to muscle into the same sporting niche.

Buyers in this segment are stepping up for the European experience. For some, that means overtly sporting character. For many others, it’s expressed in the Benz’s apparently idiot-proof dynamics, more comfortable ride, better rear cabin, outward impression of richness, and more confident expectation of retained value.

For the moment, the C-Class is the more accomplished of these two cars. But there’s only a whisker in it.

This article was originally published in Wheels October 2015.