The guerrilla fighters at HSV have done it again, ambushing Australia’s car industry at the Sydney International Motor Show with their most radical design yet, the HSV HRT Edition Maloo ute.

This top-secret project went from whiteboard scribblings to concept car in four months and almost stole the show from Holden’s much vaunted Monaro. This bodybuilder’s Maloo, hyped up on a cocktail of Nandrolone, testosterone and every other ‘rone’ you can think of, sends the ‘Wow Meter’ off the scale. 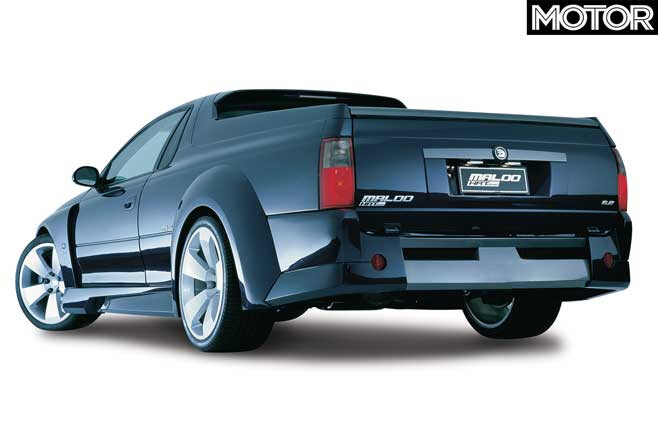 It rides on massive, one-off 20-inch magnesium wheels under bulging arches that look like Arnie’s biceps. The steroids don’t stop there. Under the one-piece front ‘clip’ is a 350kW/600Nm, 6.2-litre Chev sourced from specialist US Corvette tuner, Callaway. No figures have been run, but you’d have to bet this Maloo could bench press the quarter in a sub 14 without raising a sweat.

Get used to the pumped up styling because there’s a fair chance it will pop up on future HSV models. HSV’S UK-based designer, Neil Simpson, is known to favour the wide-body look and the TWR style guru had a lot to do with this Maloo’s malevolent stance.

Holden Managing Director Peter Hanenberger had encouraged HSV to up its style ante and the Maloo was the result, said HSV marketing boss, Chris Payne. “Early on Peter said HSV needed to move to the next level, to be more challenging in our concepts and it was directly in response to him that we got into it.”

HSV is monitoring reaction (which has been hysterical) to the concept very closely, trying to judge if over-the-top will sell and whether there is a place in its range for a car like the HRTE Maloo.

“We’re testing the market, pushing it to see what the response is,” said project architect Brad Dunstan. “You’re seeing a little bit of the way Neil wants to go and other features will be determined by public reaction.”

Payne concurs. “This car’s not so subtle. Who knows where it’s going to end but we’ve got to start somewhere.”

Dunstan, a 10-year HSV man now Executive in Charge of Engineering, said Maloo was a team-building exercise. “The guys in engineering are really enthusiastic about projects like this, they’re all petrol heads,” he said. “To let them have free reign is a good thing.”

Utes will never be the same again.

Despite being wider and longer, the HRTE Maloo body sits on a standard ute wheelbase. Front track has been widened 50mm by extending the steering rack to correct geometry and by using a reworked strut (basically now a coil-over shock) machined by HRT. The front also features an industrial-strength strut tower brace.

The 75mm wider rear track was achieved by using a different offset on the wider rear wheels. Multi-link suspension (including 15mm anti-roll bar), not found on other Holden utes, improves stability as does the placement of the fuel tank, cargo liner and hard tonneau cover which puts more weight over those monster rear tyres. We’re tipping you could still overpower the grip, though.

The extra 150mm of cabin space meant a kick-arse VDO sound system could be slung in, so behind the seats lurks the hardware (amps, crossovers etc), plus a 10-inch sub-woofer and two 51/4 inch mid-range speakers. Tweeters are in the doors.

The interior is trimmed in purple and charcoal leather with suede inserts and silver highlights, (just the thing for a tradesman’s ute). The sports seats were hand made and are trimmed in suede. Oh, and there’s a fridge in the tray for a couple of coldies, with mood-setting downlights (bring bad the drive-in, we say).

The Maloo wears the biggest set of stoppers yet seen on an HSV car. HRT and AP Racing came up with a front mtor measuring 378mm, clamped by six-piston opposed calipers. The rears are 340mm rotors and four-piston calipers. Don’t be surprised to see these anchors on HSV’s highest performance Coupe (Monaro), the GTS when it is launched in December.

To house monster brakes you need monster wheels and they don’t come much bigger than the 20-inch suckers on a Maloo. Huge wheels on a concept car is a ”designer’s trick” it makes the car look smaller but 20-inch mags were always the goal with Maloo. The nine-inch fronts and 10inch rears are clad with Pirelli P Zeros.

The mega displacement of 6.2-litres was achieved by bolting in a new crankshaft, rods and pistons pulled from the Chevy hi-po catalogue and sourced by Corvette tuning experts, Callaway Engineering.

On the inlet side, HSV’s 300kW manifold sits in the vee with the GTS throttle body. The better breathing LS6 Corvette alloy heads are distinguished from HSV’s 300kW jobbies via different shaped port and combustion chamber.

By 1300rpm the 6.2-litre already makes as much torque as the peak figure (475Nm) generated by HSV's 255kW engine. Maloo gets a stainless steel 4-2-1 system dumping through a huge pipe in the driver’s side skirt. The six-speed transmission plugs in behind a larger diameter clutch and lightweight aluminium flywheel.

Engineering attacked a body shell, laying back the A-pillar in get the rake needed for a Monaro windscreen. The B and C-pillars were shortened by 40mm, and moved rearwards.

To fit coupe dams, the FDO (Frame Door Opening) was widened by stitching two panels together; extending the cabin by 150mm (shortening the tray by the same amount). Reshaping the roof was tricky, so a sedan roof was cat in size. Around 50-75mm of metal was cut from the rear arches to accommodate the flares and wheels.

The styling team used a standard ute to hang clay flares, front bumper, sills etc. Moulds were then taken and ”low tech” fibreglass laid-in to form the parts. The one-piece front clip is also fibreglass, although the bonnet is steel. The colour is Violet Echo.

1. Out of reverence for the king of utes, the Chevrolet El Camino SS, the HRTE Maloo was almost called a Maloo Camino

2. Engineering boss Dunstan wanted to call the car ‘The Hammer’ but he rooled by the marketing department (who are no tools)

4. Styling clay just doesn’t come from any old quarry; it’s specially made and comes from Germany

5. On the first day of the Sydney International Motor Show, 68 people wanted to buy an HRTE Maloo

6. Dunstan swears his next show car will ‘not’ be a wide-bodied Coupe. We wait with bated breath

7. The engine was run-in on a dyno, then driven around in a ClubSport by Dunstan. Bet he won a few traffic light showdowns