The 2020 Mercedes-AMG A45 S is set to take the hot hatch benchmark to a new level with sub-4.0sec 0-100km/h launch control acceleration and ‘next level’ handling including a tyre-frying drift mode.

Expected to officially break cover at the 2019 Goodwood Festival of Speed in September, MOTOR can exclusively reveal the first details of AMG’s hottest-ever hatch, one that promises to send all-wheel drive rivals like the Audi RS3 and Ford Focus RS packing. Speaking exclusively about the new hyper hatch at the Circuit of the Americas in Austin, Texas, recently, AMG chairman Tobias Moers said the 2020 A45 S represented a new level of performance for a transverse engine Mercedes-Benz model, keenly describing the upcoming five-door as “an unbelievable car”.

Set to follow the recently unveiled A35 4MATIC into Australian showrooms, Moers revealed the new A45 S will pack more than 294kW, though AMG has since revealed that to be 310kW, from a new turbocharged 2.0-litre four-cylinder – a sufficient enough gain in power to push it ahead of the Audi RS3 for overall firepower.

There will also be a less powerful non-S version of the A45, good for 285kW. It’s unclear what else the ‘base’ A45 misses out on just yet.

Despite the power bump for the S, the AMG chairman said there is more to the upcoming second-gen A45 S than merely output alone, suggesting a largely new chassis, including a mostly bespoke MacPherson strut front and multi-link rear suspension boasting variable damping, making it a “more engaging and more emotional car to drive”.

“There’s no oversteer, it is better handling. You feel every corner at the Nordschleife (a reference to the Nürburgring circuit where a good deal of the new five-door hatchback’s development has taken place during the European summer). It is also better riding; we’re very focused on chassis stiffness,” said Moers.

Like all new compact models from Mercedes-Benz, the 2020 A45 S is based around a heavily re-engineered platform. Known internally as the MFA2 structure, it has been reworked in various areas by the team at AMG to provide the new car with a level of rigidity described as being beyond that of regular fourth-generation A-Class models.

This critical change in the drivetrain has enabled AMG to provide the new A45 S with a drift function similar to that originally brought to the E63 S. “It will go sideways,” enthused Moers, who previously headed up new vehicle development at AMG prior to being elevated to chairman in 2013, hinting it will go a long way to answering criticism of the clinical driving characteristics of the initial A45.

News of the adoption of the new four-wheel drive system and drift function comes after the unveiling of the new A35, a car the AMG boss said delivers a level of handling beyond “the A45 of today, if not more”.

Moers confirmed the new A45 S will pack a “totally new engine,” which we now know is the M139, the most powerful road-going production four cylinder yet.

The M139 boasts the same swept volume as the M133 that powered the first-gen A45, with bore and stroke of 83mm and 92mm giving an overall capacity of 1991cc.

Key elements of the new engine, which will be built on a new state-of-the-art production line at in AMG’s engine facility, include a newly designed aluminium block. It is manufactured from an aluminium alloy known as ‘AlSi7Mg’, features the same 90mm cylinder spacing as the M133 and uses Mercedes-Benz’s patented Nanoslide coating for the cylinder walls to reduce frictional losses.

Additionally, the cylinder head has also been reworked. It is produced from an aluminium alloy known as ‘AlSi10MgZr’ that includes zirconium silicate to increase thermal conductivity.

The new four-cylinder also receives the German car maker’s spray-guided direct-injection, chain-driven camshafts and a twin-scroll turbocharger that, unlike that of the old engine, is programmed to operate at a maximum 30.5psi of boost pressure. That’s up from 26psi in the last A45.

The routing of air from the inlet manifold into the cylinders is different to that of the old M133, with engineers rotating the engine 180 degrees to reduce the ‘plumbing’ distance for airflow. This is claimed to provide a more ‘naturally aspirated’ feeling for throttle response. Oh, and it’ll rev to 7200rpm.

Various reports quote the AMG head as saying the A45 S’s new engine will be mated with an eight-speed dual-clutch automatic gearbox, although this has yet to be 100 per cent confirmed. With the current model offering no manual transmission option, it’s almost certain the next A45 will follow suit.

Assuming it hits the scales at a similar weight to today’s 1480kg first-generation A45 4MATIC, the new model may well be in line to become the first series production hatchback to deliver a 0-100km/h time under 4.0sec – some 0.2sec faster than its predecessor.

Nothing is official just yet, but AMG officials have revealed the Audi RS3 and its 4.1sec 0-100km/h time is the clear acceleration benchmark, with a launch-control-assisted sub-4.0sec sprint likely for the A45 S.

Stylistically, AMG’s new hyper hatch will be differentiated from the A35 by a more aggressive Panamerica grille set within a uniquely styled front bumper featuring larger air ducts. Further exterior elements include uniquely designed wheels up to 20 inches in diameter, wider sills underneath the doors, a more prominent rear hatch spoiler and larger rear diffuser. 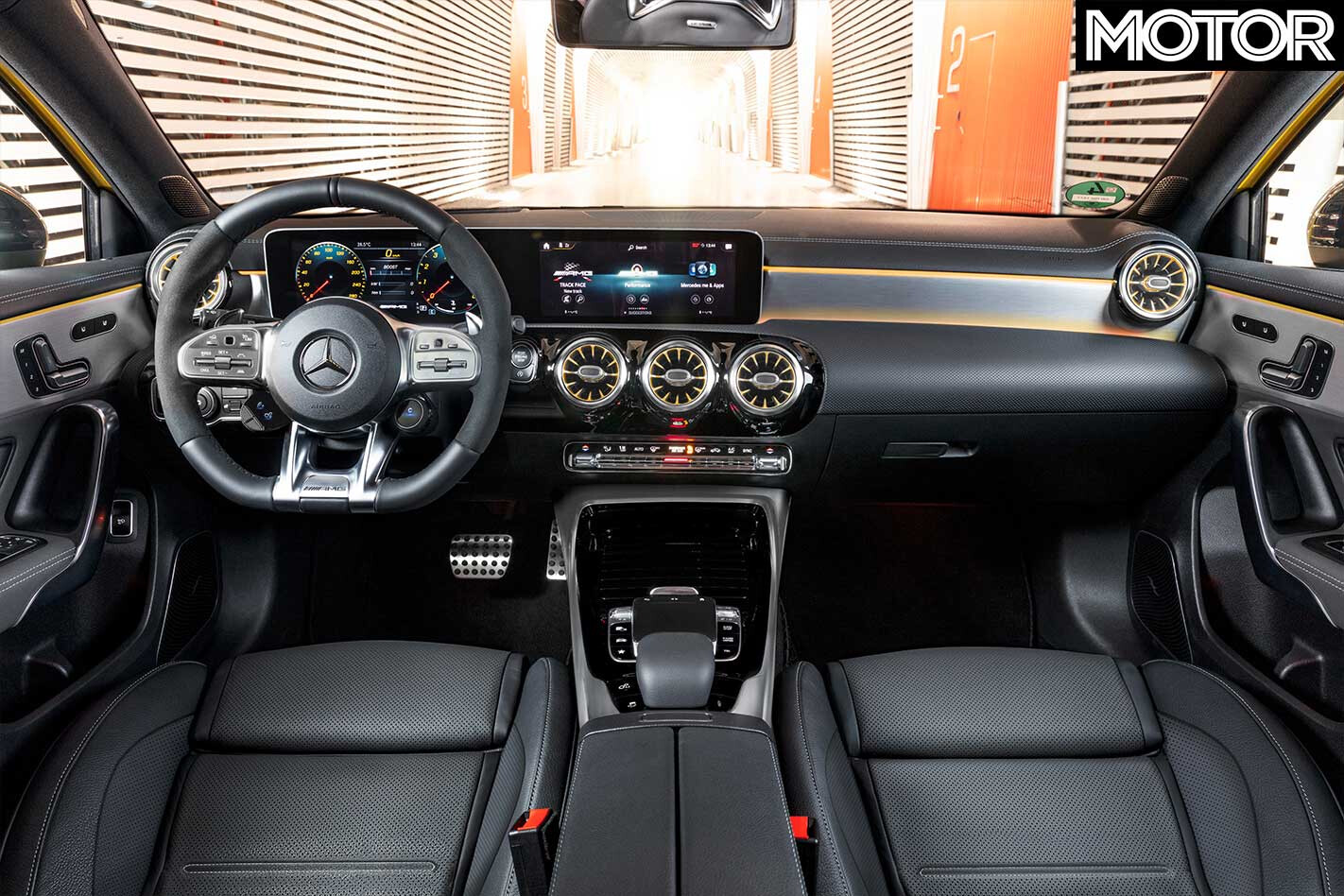 Inside, the second-generation A45 will feature its own unique digital instrument graphics and Mercedes-Benz’s new MBUX operating system among a range of sporting touches, including an AMG multi-function steering wheel, front seats and trim elements.

The next A45 S is unlikely to reach Australian shores this year, a 2020 on-sale date more likely. Pricing is currently the exclusive realm of speculation; the outgoing, heavily specified A45 is $78,240.

01 - Headline figures
Boasting mega power figures, the next-gen A45 is rumoured to nail 0-100km/h in less than 4.0sec. This would make it the hottest of hot hatches, besting the Audi RS3’s 4.1sec.

03 - Drift ready
Majority of drive can be sent to the rear wheels, as opposed to only 50 per cent with previous A45. Will gain unique track widths, too.

05 - Body donor
New MFA2 platform will underpin not only the A-Class, but will be shared with the CLA and B-Class.

Far from having it all its own way, the second-generation Mercedes-AMG A45 will need to be good to compete against a slew of upcoming models.

Rumoured to be packing a mild-hybrid system in combination with a high-output combustion engine, the next Ford Focus RS poses one of the biggest threats. Expected to channel more than 300kW through all fours, the RS will also adopt an angrier exterior design (artist impression pictured) based on the all-new Focus.

Hyundai is wanting to add a halo model to its range, and the RN30 Concept could be a sign that an all-wheel drive hot hatch is in the works. The RN30 uses a 280kW/450Nm four-cylinder turbo and is tied to a wet-type dual-clutch transmission.

Rumours are gathering that VW is planning a mild-hybrid version of the Golf R, with a combined output of over 300kW (with the EA888 four-pot).

With the new BMW 1 Series adopting front-wheel drive and AWD, it seems an M version (if one is coming) would be AWD for better packaging. What powers it, four or ( unfortunately unlikely) six cylinders, is the bigger unknown.