It’s known as the Bathurst 1000 of the Outback, so how do you prep a stock-standard Mazda ute for a 452km desert bash?

But when did good sense ever stop the magazine that took a Porsche 911 to the top
of Big Red, and a 7 Series limo up the Birdsville Track?

So we put it out there that Wheels wanted to compete in the race they call the Bathurst 1000 of the outback, the Finke Desert Race. And Mazda – cleverly or stupidly, jury’s out – stepped up.

So now, on the June long weekend, Team Wheels with yours truly at the wheel and seasoned co-driver Bernie Webb calling the turns, will line up alongside 559 other cars, bikes and quads to see who can get from Alice Springs to Finke and back the quickest.

Utes have gone from being rudimentary workhorses to genuine off-roaders, everyday runabouts and family cars. As well as traditional players including Holden, Ford, Nissan, Mazda and Mitsubishi, there are relative newcomers in the segment such as Volkswagen and, soon, Mercedes-Benz and Renault.

They’re big business in showrooms around the country, and three of them are among the nation’s best-selling cars. But they’re not all that popular with off-road racers. Our BT-50 XTR – a $51,700 unit complete with reversing camera and sat-nav – will be competing in a near-showroom class against just four others. A podium, therefore, is a real chance, especially when you take into account last year’s 55 percent attrition rate among four-wheel competitors.

First stop for our soon-to-be-race-ute was the workshop to get prepped for race duties.

Our Finke car is a regular production car that was used at the media launch for the updated Mazda BT-50 last September. It’s also spent a fair chunk of its life lugging around a 2.1-tonne caravan. And to really wring its neck, Wheels and sister publication 4X4 Australia threw AFT-123 into an eight-way megatest – as reported in our May issue – that included a stint at the Melbourne 4x4 Training and Proving Ground, where it was headlight-deep in water crossings and crossed-up over moguls designed to stretch and stress every inch of an off-road vehicle. 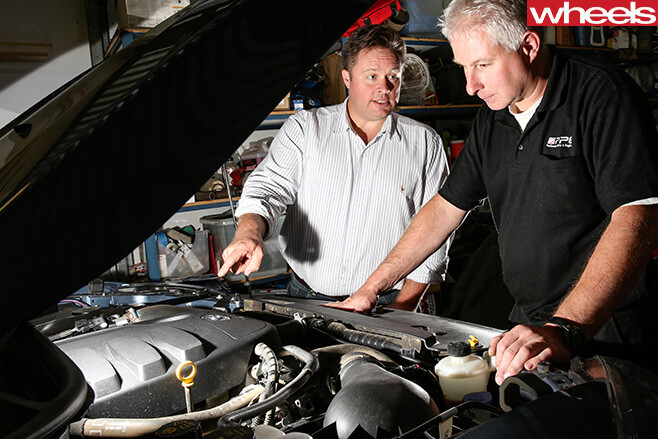 Then I had it for a few months, giving it the full family treatment; holidays, shopping runs and the occasional blast to a mountain-bike trail. So it’s fair to say it has been pretty well run-in, with close to 10,000 hard clicks on the clock.

Indeed, the crew at motorsport specialists Performance Parts & Engineering – the team at the centre in our Finke assault – spotted the occasional clue that AFT-123 wasn’t fresh from the factory.

“Have you been to McDonald’s in this car?” was the query from Pete as the interior was being stripped to fit a roll cage. Turns out not all those French fries ended up in the mouths of my kids. Again, just like so many family cars. So Job One was a thorough clean. 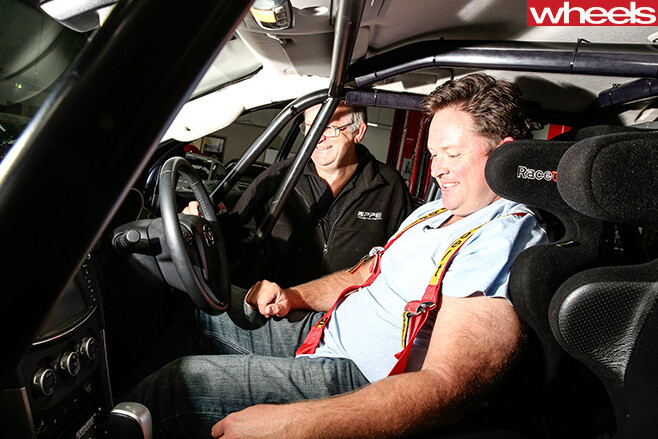 During its month in the workshop, our BT-50 had very little done in the broader scheme of race-car development. Most of it centred on mandatory safety requirements. The biggest changes are the ones you can see: the certified roll cage; a pair of race seats; six-point harnesses; a sizeable number 750 hanging off the sports bar; and a sinister grey wrap to complete the dirt-buster look.

We threw some tougher Toyo off-road tyres at the standard 17-inch alloy wheels, underneath are some extra sheets of metal in case we bash something serious, and we’ve gone for some heavier-duty brake pads and linings (it’s still got drum brakes at the back). Aside from upgraded shocks, the suspension is standard, including the rear leafs because they’re designed to cope with a hefty 1095kg payload. 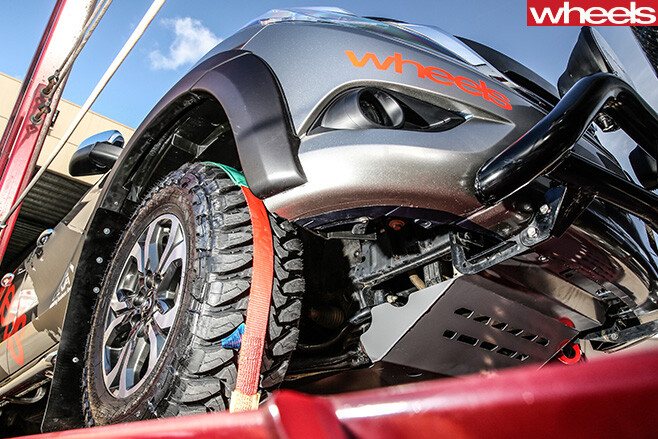 The 3.2-litre five-cylinder turbo-diesel engine has had nothing more than an oil change as part of a service that included new fluids throughout, all factory-approved and recommended by Mazda. Same 147kW and same 470Nm outputs as the ones you see driving around every day of the week.

Experienced co-driver Bernie Webb will be riding in the hot seat. He has sat alongside some of Australia’s best rally drivers, including Targa Tasmania paceman Steve Glenney; they won outright in 2008. He’s also meticulous with pace notes, which should be handy over the notoriously challenging – and occasionally treacherous – Finke course that loosely follows the Ghan Railway line south of Alice Springs.

Our pace is expected to be a little more relaxed than Targa Tassie, although lumpier and bumpier than anything your average rally throws up. The fastest buggies and trophy trucks have enormous suspension travel and dampers designed to cope with repeated high-speed hard hits. Not that we can afford to muck around. Competitors have to finish the 226km course in four hours, and the course is then repeated in reverse the next day. That means an average speed of 56.5km/h, which many outback travellers will tell you is difficult enough on a good road – seemingly impossible on the punishing Finke course.

While a win in the production car category would be a dream result, that’s not the goal. The aim is to finish – in the process (hopefully) proving that a factory ute designed for more genteel duties can also kick its heels up and maintain a decent pace in what is shaping up as hell of a challenge.

Right now, the June 11-13 Finke Desert Race is two weeks away. We’ll have a full report in the August issue, on sale July 21. And stay tuned here for more updates.