Excuse the tautology, but it was deja vu all over again. At the 1999 Sydney Motor Show, when the cloth was lifted from Holden’s ‘Coupe’ concept it was an instant star of screen, print and public. Holden lapped up the admiration as much as the public did at the prospect ­− and then realisation − of its production.

This feature was originally published in MOTOR’s December 2002 issue

Three years later, Monaro is on the streets and Holden drops another bomb, so to speak. While much less a secret than the Coupe, Holden’s SSX ‘hatchback’ design concept was, arguably (and again) the star of the 2002 Sydney Motor show. 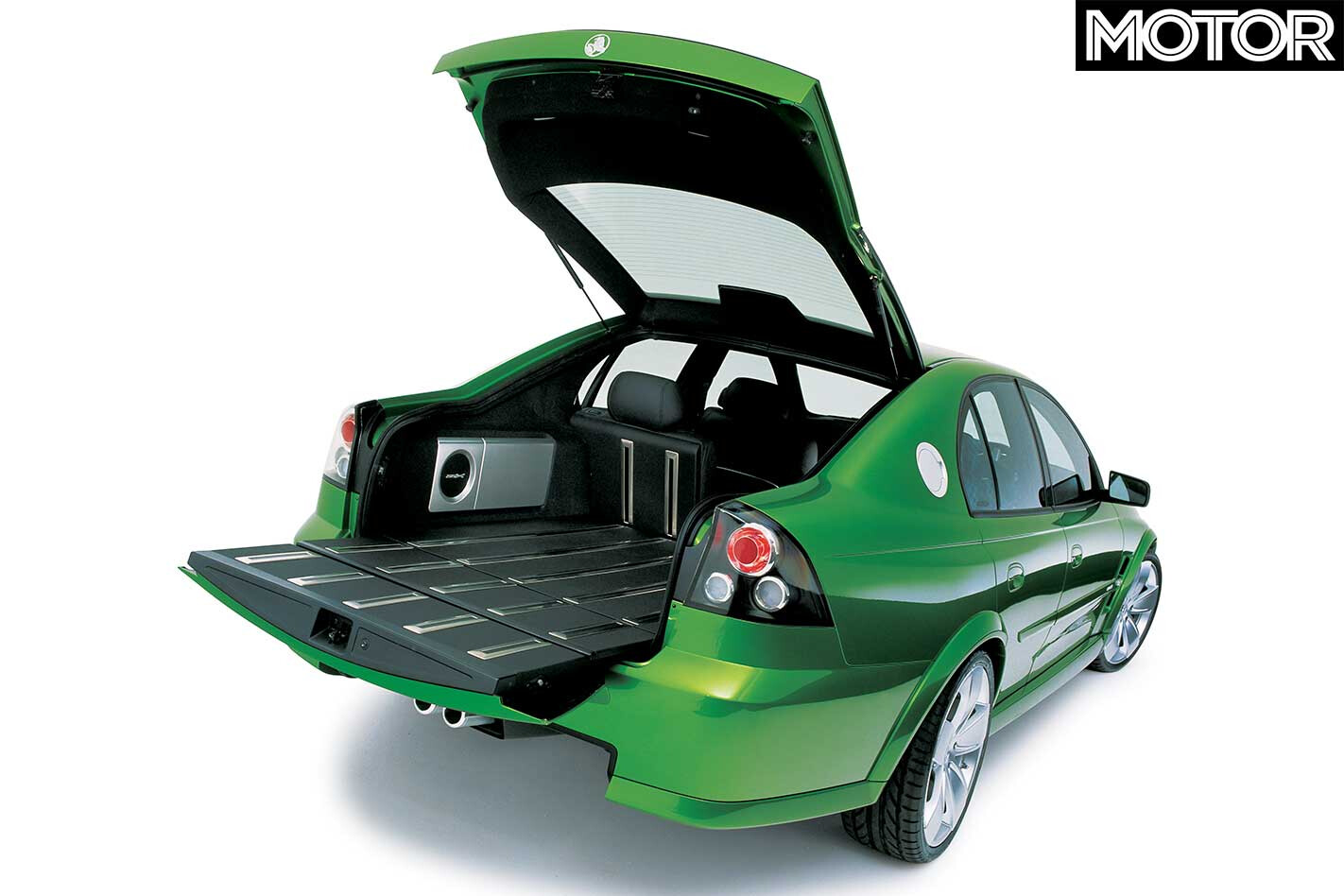 Coupled with its electric paint, 19-inch wheels (with tyres displaying just the slightest hint that they had been driven on) and low-slung ride-height, the SSX must have left many other manufacturers − that blue oval badge included − scratching their heads in gazumpment.

So why the all-in-one concept? Well, as the near-by Mitsubishi stand proved, with relatively few viewers of the AWD Magna, marvels of mechanics does not a talked-about car make. The SSX’s hatchback body got ’em in but it was the all-wheel drive that blew ’em away.

So why build it? The idea was about showing what could be done. Head of Design of the Monaro and the SSX, Mike Simcoe doesn’t like wasting his time on cars: “Concept cars are nice to do, but I like to think everything we do has the feasibility of going into production. And the SSX was built with this in mind.”

The all-wheel drive running gear was first seen in the Cross8 concept and, in wagon form, it’s heading into production next year. Holden simply wanted to prove that its platforms, and drivetrains are multi-use enough to allow for a number of variants: wagons, hatches, even convertibles.

Naturally the SSX, like the Monaro, is being used as a meter for public interest. Simcoe says if Holden were to give the green light to SSX, it could be turned into a reality in the same time as Monaro:
24 months. Which is tricky timing, because that lands it with barely one production year before the new VE platform in 2006.

As radical as it looks, the SSX isn’t as far removed from the Commodore sedan as it may appear. The underbody has its minor alterations (a slightly forward mounted fuel tank, specific front lower control arms and struts to accommodate the front diff and driveshafts) but the all-wheel drive Holden running gear was accommodated very neatly.

Using ‘bits and pieces’ from different areas of GM to assemble the drivetrain (including the Gen III 5.7-litre V8), the SSX’s four-speed automatic gearbox takes drive from its rear output shaft to a transfer case.

While drive to the rear continues conventionally through a two-piece tailshaft, a secondary driveshaft runs from the transfer case forward along the passenger side of the gearbox to the front diff housing and constant velocity joints. Simcoe added that the front and rear undertrays not only aid aerodynamically, “but they keep prying eyes from what we don’t want people to see yet [the diffs]”.

The consequence of this running gear, chosen ‘for simplicity’ says Simcoe, is a wider track. The all-wheel drive bulges the front and rear tracks by 54 mm and 93 mm respectively, while the body itself is 94 mm wider than a VY SS. Which is partly the reason for the different offset of the super light cast magnesium 19-inch alloys. Simcoe added: “But the footprint is still the same.”

The guards however, are not and it’s the extensions front and rear that give the SSX its visual muscle. “We sell image as well,” tells Simcoe, justifying its super low ride and menacing appearance. Even the Holden colour, Hot House Green was tweaked; the SSX’s ‘Kryptonite’ paint is a heavily manipulated, hand-sprayed version with tinted top coat to give it more punch.

Bodywise, the only panel SSX shares with the standard VY Commodore is the bonnet. The front bumper is deeper and more ducted, with projector beams, a lower lip and an exclusive grille. With their wheel arch extensions the guards are wider but accented with trailing gills on the front. They are details which, while good for making an impact, can be cut to reduce production costs.

With the obvious new rear sheetmetal, there’s also a subtle black spoiler and exclusive LED tail lamps. The functional fuel filler cap is also something Simcoe believes could follow through to a final version. Naturally though, expect some shared panels with the Commodore and some cost minimisation for production.

Over 14 months from design to modelling and build, SSX had around 80 people involved including senior exterior designer Max Wolff, interior designer Warwick Leach and colour and trim designer Kirsty Lindsay. So unlike the Coupe, many more inside Holden knew of the project.

“All the new panels [for SSX] were pressed from steel,” says Simcoe. “We wouldn’t have been able to do that by keeping it a secret. But it’s fully engineered as a driver.”

That means computer-designed pressed steel panels with reinforced C-pillars, and internal structuring designed to simplify a shift to production, even revised rear seat mountings. The hatch is also a feature in that it not only features the tilt-up function, but also the fold-down lip with its stainless steel wear strips, which allows for a flat loading area.

SSX is a specialist four seater, with a centre console that runs into the rear, splitting the seats with a storage bin. The red lit gauges and multi function display are also exclusive to the SSX, along with the silver console trim and black leather seats.

It all made the final deadline with about a week to spare: just enough time to get the SSX out to Avalon Airport for some actual driving and the filming of its own promotional video, which ran throughout
the Sydney show.

Being a showcase for performance, there’s the obvious question of its relation to the HSV brand. Holden’s Marketing Director John Elsworth suggested he wouldn’t be surprised if HSV were to use, even debut, the drivetrain combination, at least for a feeling of exclusivity. For now though, if feedback from the Sydney Motor Show is a guide, it shouldn’t be too surprising to see a production version of SSX.

“So far, all the reports and feedback we’ve had has been fantastic,” told Elsworth. “I don’t think you’d get another ‘Coupe’, but we do scour the media and use the public response in terms of letters or dealer inquiries to gauge potential for production.”

With a factory that’s already running at capacity to meet demand, just how could SSX be accommodated? Elsworth: “We’re ramping up production and with vehicles like the Cross8 and the all-wheel drive wagon next year, so we’ll be ready.”

Naturally with the export success of the Monaro, there is consideration for exportation of the hatchback body and/or the all-wheel drive, but typically Holden’s official line is to concentrate on development focusing on the local market first.

For now though, SSX will be returning home for a few of the engineers and development team to drive and experience the all-wheel drive hatch, then it’s onto a tour of shows, dealers and being put out amongst the public to gain feedback and opinion. And as the Coupe has proven, we know how persuasive that can be.

Max Wolff is, in the tradition of all fresh-faced design talent, highly possessive and protective of the SSX. It is, after all, his baby. Externally, at least.

If the SSX gets moved, he moves it. If it needs polishing, Max-approved detailers go to work. It’d be no surprise if the 30-year-old personally mixed the paint with his index finger. He has the sideburns – a design prerequisite in the Simcoe era – and wears his shirts long-tail.

And Max has known his boss for a long time. As an 18-year-old, Wolff dropped in for their first chat.

He wandered off for a while after that (picking fruit, working in factories and pouring beers), before ending up in a design consultancy. That lead to Monash Uni, then a stint at the Millard design house.
He returned every couple of years for another dose of Simcoe’s trademark selfless advice and amiability.

His mentor tipped him off about an upcoming Holden gig and, on May, 1998, Wolff was on the payroll. In the deep end, too, doing the VY with Peter Hughes. When Hughes moved across to do the YGM1 concept, he was on his own.

The SSX, then, was a bit of a relief, allowing for a further exploration of VY ideas. He’s proud of its detailing, with things like the hexagonal mesh inserts, the rear lamps and the reversal of the exhaust tips for the instrument cluster among his favourite highlights. And he even finished it in time to do the HRT 427C.

All Paw - What is hidden underneath that body

The all-wheel drive running gear in the SSX, and as used in the Cross8, is set for production in the wagon next year. While the exact specifics of the running gear are vague, there’s a mysteriously similar GM system used in the USA. The Cadillac SRX, running a Northstar V8, uses a three (open) differential layout with a 50/50 torque split.

While we’re not suggesting it’s the same system, there are some logical reasons that Holden would use at least some of the parts for SSX. The Cadillac’s centre differential is a lightweight aluminium casting, which transfers power coaxially along the principle powertrain centreline, and powers to the front via a chain drive offset on the passenger side.

Naturally, with the need to be on the opposite side for Australia, this is one area of difference. With a 3.23:1 final drive, the front diff housing rigidly attaches to the engine’s oil pan with an intermediate shaft passing through the pan and supported by a bearing on the driver’s side.

This design has flexibility in its plunger movement (the expansion and contraction of the required ideal driveshaft length as the suspension moves). This allows for the low and high ride-height versions.

Instead of using LSDs, the Caddy system uses StabiliTrak, a form of traction control. When one wheel spins excessively, it applies braking force to that wheel so drive is sent to the others. It can vary the amount of allowed wheelspin for aggressive driving or on slippery surfaces like gravel. And it’s switchable. There are, though, already indications that the all-wheel drive Commodores will use a torque-sensing LSD.