A new-look racing Commodore is a rare event. It only happens about every 10 years. The next one is well on the way and it will be the most radical yet.

The Supercars version of next year’s ‘NG’ Commodore is unique. It will be the first not based on the shape of a locally made, rear-wheel drive model and the first without a V8. In appearance, Holden’s 2018 racer is an aggressive version of the imported front- and all-wheel drive next-gen Commodore. Just add aerodynamic accoutrements and war paint. Under the bonnet will be a twin-turbocharged 3.6-litre V6 from Cadillac’s ATS-V.R GT3 weapon in the States, retuned by GM Racing to meet the Gen2 Supercars engine rules to maintain parity with the existing 5.0-litre normally aspirated V8s.

Of course, the new Commodore body will sit on the existing Supercars control chassis, which remains rear-wheel drive. The engine bay will be adapted to fit the all-aluminium twin-turbo V6, which may need to be ballasted to match the weight of the iron-block V8s. Holden is the only manufacturer so far to commit to the Gen2 engine rules, which allow configurations other than V8s. Development of the ‘NG’ Commodore race package is well advanced on both sides of the Pacific.

The program represents a major departure in the way Holden goes racing. First off, it switched the Holden Racing Team title to Triple Eight Race Engineering as the sole factory-backed team. As well as its lead two-car entries of VF Commodores for Shane van Gisbergen and Jamie Whincup becoming the Red Bull Holden Racing Team, Triple Eight is co-ordinating the design and development of the Supercars version of the ‘NG’ Commodore.

Roland Dane’s benchmark group is working with Holden Design boss Peter Hughes to adapt the shape of the five-door ‘fastback’ new Commodore and optimise the aero body kit to the Supercars rules. Triple Eight is also liaising with GM Racing in the States on development of the twin-turbo V6, the first non-V8 in Australian touring car championship racing since 1994. What’s more, having replaced the Clayton enclave in Melbourne – which ran HRT for 26 years – the Banyo band in Brisbane will be the sole supplier of major racing components to all Lion legion teams. 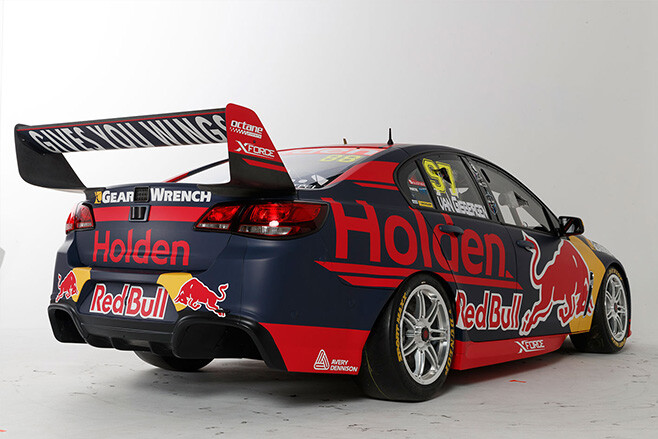 Holden’s move to centralise supply and cut costs to all teams running the ‘NG’ Commodore – Triple Eight among them – includes leasing them standard-spec engines at a fixed price. The motors will be supplied by GM Racing and, initially at least, will be monitored and maintained by visiting American technicians. Triple Eight’s long-time engine guru Ken McNamara – known in the industry as ‘Kenny Mac’ – has a limited local role that should eventually see him servicing the motors.

The Aussie-spec version of the LF4.R GT3 motor, based on the production Cadillac ATS-V’s twin-turbo 3.6-litre V6 (a high-end, blown derivative of the VF Commodore’s base sixes) has been developed at the GM Powertrain Performance and Racing Center in Pontiac, outside Detroit in Michigan.

GM Racing ran the first Holden Supercars iteration on the dyno in the second week of January. A running engine was due at Holden by early February for initial local testing, while Triple Eight was expecting a mock-up motor in early March to begin fitment work with the chassis.

Interestingly, although Dane says the ‘NG’ Commodore body shape fits “like a glove” on the Supercars control chassis, it actually needs to be chopped to retain the proportions of the road car. The VE/VF racers’ roof and rear door panels need 93mm taken out to meet the mandated wheelbase length, which was based on the shorter VY/VZ dimension. Although the road-going ‘NG’ Commodore has a similar wheelbase to the pre-VE generation, its front-wheel drive layout means the race version requires close to 100 mm removed from the middle because the engine is mounted much further back.

Computer renderings revealing the look of the next Supercars Commodore should be shown around mid-year, while it is hoped a first track test of the prototype race car will happen sometime in the third quarter (July-September).