Life with a Tesla Model S P100D: Can it be a performance car?

FEW things are quite as pleasing as sneaking out of the office before knock off time. When you have a Tesla Model S P100D waiting for you with the Old Pacific Highway programmed into its Google-powered Sat-Nav, well then you have a mighty fine afternoon in the ‘office’.

Working from Wheels HQ in Sydney for the first half of my two-week Tesla ownership experience meant I could grant myself an early mark without our Fearless Leader (Sir Inwood) chastising me.

I was planning a trek to the Old Road for an afternoon burn in the bright red Tesla. The twisting turns of the Old Pacific Highway were an old stomping ground for me back when I lived the adrenalin-fuelled two-wheel life, and an entire day could be blasted away drinking milkshakes and burning tanks (plural) of fuel with ease. What better place to test if the P100D had the performance credentials to back up the headline-hogging 0-100km/h figures?

Life with a Tesla Model S P100D: The great Aussie roadtrip, minus the fuel

This wasn’t about straightline speed, it was about how the almost 2.5-tonne beast handled the dictionary definition of a driving road, and to answer an office debate on whether the flagship Tesla could be counted amongst the performance car fraternity.

It was a discussion that had yielded varying results. What are the criteria of a performance car, and what qualities can disqualify a potential nominee? Is there a power output that must be exceeded, a maximum weight, 0-100km/h benchmark, or does it all come down to lap time abilities? There was no solid definition, instead a swirl of grey.

For the most part performance cars are rather black and white; a Mercedes-AMG C63 S is black, where a Volkswagen Golf 92TSI is white. Tesla P100D? As grey as a Melbourne sky. While some marvelled at its speed, others complained there was an absence of real blood-pumping driver engagement. 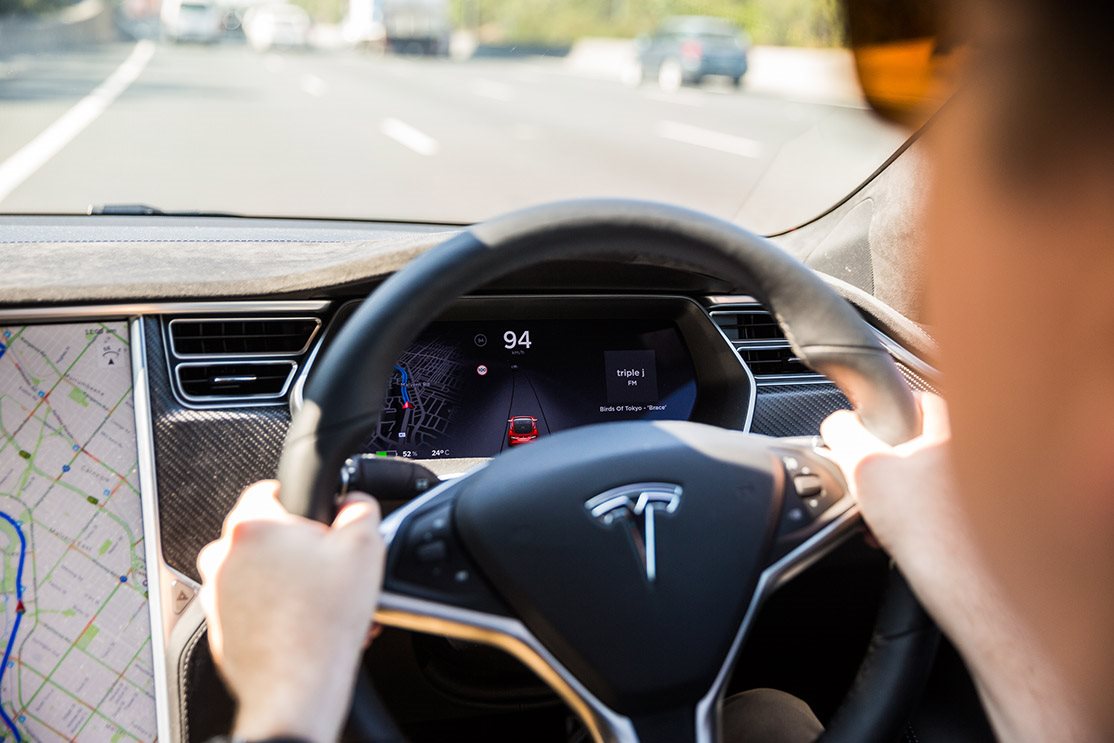 My sneaky departure from the offices was conjured in the hopes of washing away the confusion and finding clarity underneath.

Consider this car costs a gobsmacking $314,161 to get on the road (as tested), and you’d wanna hope the thing could harass some of the quickest cars and motorbikes around. So, how does Tesla’s car of the future handle the Old Road? In one word: quickly.

Life with a Tesla Model S P100D: How we ended up here

From the moment you decide to stick your boot into the Tesla’s right pedal, to when you finally back off from fearing your heart will break your ribcage, the P100D is a thrilling, exhilarating blast. With electric motors on all four wheels the torque vectoring allows the large sedan to pitch into corners with ease, and sits comfortably regardless of mid-corner bumps or big stabs of accelerator.

Steering in sport mode has good weight without being excessively heavy. But there is a serious disconnect in feeling. You’ll be warned you’re approaching the limit by the franticly blinking traction control light well before you get any tactile feedback.

The P100D’s braking is surprisingly forceful and efficient for the car’s size. At full attack stamping on the brake pedal will scrub speed off with haste, while a more ‘casual’ approach (if triple speed digits can be casual) is still attainable thanks to the regenerative braking effect of the batteries. In fact, on a slower downhill pass I was able to charge the batteries simply by allowing regen to control speed and slow the car when heading into bends.

You can be very heavy handed with the Tesla and it’ll take the punishment willingly. The 1400Nm of torque means corner exits will etch a deep grin onto your face.

So, is it a performance car? It depends on your tastes.

For me, yes. It’s just not a great one. If performance vehicles were aquatic animals the Tesla is an Orca to, say, a 911’s Great White Shark. Where the 911 is built for the kill, the Tesla can keep up without too much stress, it just won’t give you that same emotive and visceral joy. But if it’s just speed you are looking for, whether on a straight road or twisty, the P100D is without a doubt amongst the best.