There’s something surreal, almost magical, about being a car fanatic in a proving ground.

It’s the forbidden zone – like Area 51 for motor vehicles – buried deep in the bowels of nowhere, trying to look as inconspicuous as possible, despite the cyclone fencing and barbed wire guarding the perimeter, implying that what’s inside must be important. It is. Beyond the maximum-security gates, the world’s automotive future awaits.

The universal layers of seemingly endless security scanning might be a common denominator, but no two proving grounds are alike. After having spent several days embedded inside Hyundai-Kia’s vast testing facility in Namyang – a two-hour haul by bus from the South Korean capital, Seoul – I’ve never seen an automotive candy store so chock full with cars from around the globe, and still-under-development prototypes, as this one.

‘Benchmarking’ carparks are literally everywhere, brimming with everything from a fleet of ultra-cool Suzuki Hustlers (a tiny, upright 660c Kei-car ‘SUV’) to various Mercedes-AMGs, alongside hordes of BMWs, Audis and Japanese-brand fodder. Then there’s the stuff I can’t talk about, including future generations of quirky coupes, performance hatches, Asian-market sedans and luxury vehicles, almost undisguised except for front and rear car bras. And a dashboard modesty covering if they’re parked … but not always. 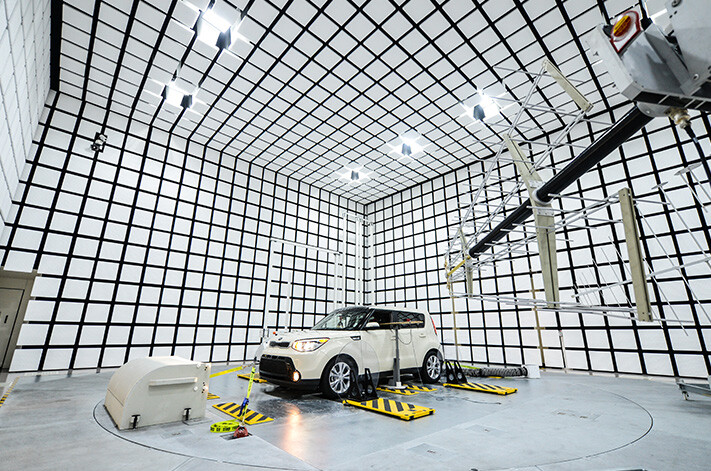 A multitude of very clean workshops, housed in hangar-sized warehouses, protect at least 20 unreleased or soon-to-be-facelifted models from Hyundai and Kia. Upstairs are multiple floors of engineering labs and offices, while down the road sits the cream of the crop, an almost-new design building with a cathedral-like ceiling, cloaked in Modernist-inspired angled glass. Inside, roughly twice a month, big names like design overlord Peter Schreyer influence the next phase in Hyundai-Kia’s bullish ambition to be the biggest car company in the world.

There are so many buildings spread across such a huge area inside Namyang that this facility even has its own bus service. With 20,000 people working on-site every day, it’s like mobilising and organising the population of an Aussie country town.

And feeding them. Massive cafeterias are scattered about the place, each specialising in a certain type of cuisine, prepped to feed the hordes of workers spewing from each building at exactly midday once a quaintly school-like bell chimes loudly. It’s like hearing a ringtone for ‘little lunch’. But the Koreans are Swiss-watch perfect. Within minutes the cafeteria lines are almost out the door. By just after 1pm, the food halls will resemble ghost towns.

‘Western’ day means hot dogs and burgers, but we head to the nearest Korean cafeteria, avoiding the dumb-American stereotype while pretending to look confident that we know what we’re eating. It’s bloody good, whatever it is, once you work out what to mix with what, but the Anglos clearly aren’t quite on the same culinary page as the savvy South Koreans. Out on the multitude of driving roads snaking through the outer area of Namyang, however, it’s a different story. A level of decorum still prevails, but it’s every Korean for themselves on the massive skidpan area. It’s almost liberating watching test drivers do as they please from a starting line – some simply stopping in the middle of the concrete field as others swerve left to right, testing steering feel or ESC intrusion, and some cars perform brake tests. And we’re talking everything from sub-B microcars to performance hatches, SUVs, and twin-turbo V6s. When you have so many new cars to deliver, multi-tasking is mandatory.

The various ride roads grid layers of different surfaces next to each other, trying to replicate everything the world has to offer – from road hits and yumps of increasingly intensity to ‘judder bars’ that feel like they could burst a tyre. The real-road handling circuit, on the other hand, snakes and dives its way through a course that demands familiarity. Get it wrong and you can kiss your prototype or pilot-build steed goodbye. It’s brilliant the way the road drops and dives, then rewards commitment with some serious banking to build lateral force.

Only on the ‘track’ section – where the media hammered the first Kia Stinger prototypes late last year – does Namyang offer some properly smooth, German-type racetrack surfaces. It’s a smallish course, mixing Simmons Plains with an element of Wakefield and a touch of Catalina, but it works for most road speeds, hence why HMC also has a testing facility based at the much-faster Nurburgring.

Out here, you wonder how anyone could spend every day at a desk, even though that’s exactly what the engineers will need to do later on. Crunch numbers. Away from the prying eyes of the general public, even though photographing a prototype on a Korean road is a federal offence that breaches intellectual property. No wonder they get so upset when we photograph them in Australia!