Completing the box set of insanely batty Audi Sport cars coming down the pipe in the next two years is the Audi RS Q8, considered by the Audi Sport team to be the last word in performance SUVs.

It takes the stylised Q8 coupe-slash-SUV to new heights of frankly ridiculous performance, but without spoiling the abilities of the standard car.

“It’s our interpretation of a high-speed SUV coupe,” says Michael Binder, the product manager for the RS Q8. “It opens a new dimension of sporty perception within our RS family. It’s our most expressive, highest performing Q we’ve ever done at Audi.”

Big claims… and there were a few raised eyebrows in the halls of Ingolstadt when the request came down the pipe.

“We are talking about one of the biggest and heaviest cars we make. How could we make an RS model from a 2.3-tonne SUV?” says Michael Barma, the technical project manager.

“In general the Q8 is developed as a luxury SUV, so what we tried to do was increase its overall range to incorporate more sportiness. It’s possible to have the same off-road performance like the Q8, have the same daily driver advantage, and have it that it will still perform on track.” 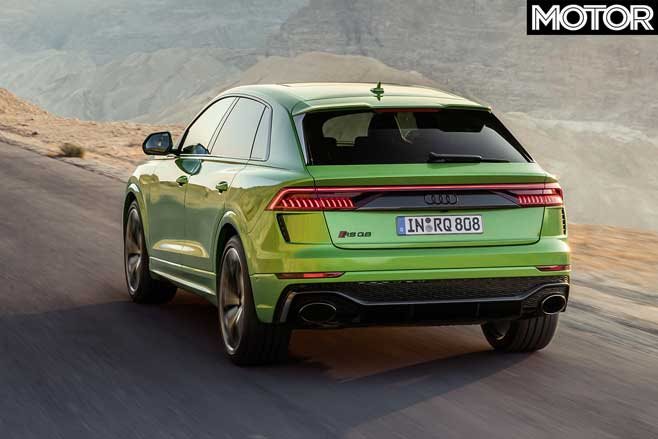 The BMW X6 M and Mercedes-AMG GLE 63 coupe are considered its main competitors, but the Lamborghini Urus – which shares much of the RS Q8’s powertrain – and the Porsche Cayenne Turbo is not.

“Price-wise, the Urus is up here, and we are somewhere down here,” said Binder. “It’s a different brand; it’s more dynamic, more sporty, more extreme, so we tried to stay a little bit below this car. Same story [with the Porsche Cayenne Turbo]; we try not to compete with internal brands, of course. This is why we focus on BMW and Mercedes. [Our bosses] give us an area to play in, and this is the way we go with our RS models.”

The visuals for the honking great SUV follow the same ‘less is more’ and ‘make it blacker’ philosophy used for the other new and updated additions to the RS family, including the RS Q3 Sportback and the menacing RS7.

A massive blacked-out snout, reprofiled over-fenders and a new deeper, wider rear roof spoiler are just some of the elements that give the RS Q8 a whole new level of bad-ass. 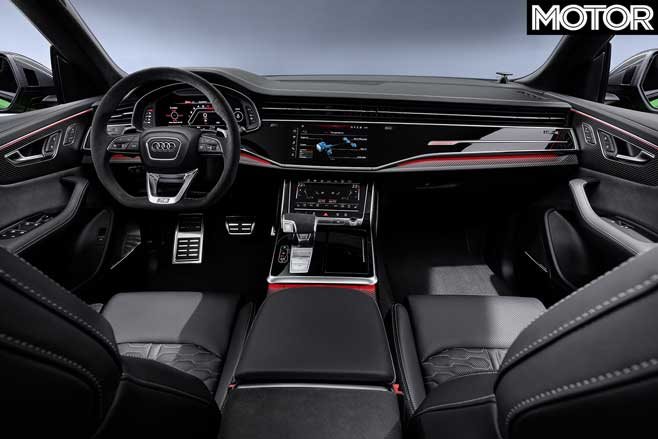 Wheels are a simply nutty 23 inches in diameter and 10.5 inches wide, with 295/35 tyres stretched over them. Arch covers for the fronts are 10mm wider per side at the front and 5mm wider at the rear. The rear spoiler is bespoke to the RS Q8, and is longer and wider.

The 4.0-litre V8 turbocharged engine that graces the RS6 and RS7 is shovelled under the bonnet of the humungous SUV, and produces the same 441kW and 800Nm of torque thanks to its hot-v turbos, its eight pistons and its thoroughly bad attitude.

It pushes this behemoth from 0 to 100km/h in just 3.8 seconds. “It’s something we’re very proud of,” grins Barma. “It’s quite cool.” Top speed is the same as the RS6 and RS7 at 305km/h when combined with the brand’s dynamic package.

It can send 70 percent of that prodigious poke to the front end or up to 85 percent to the fun end, as well. 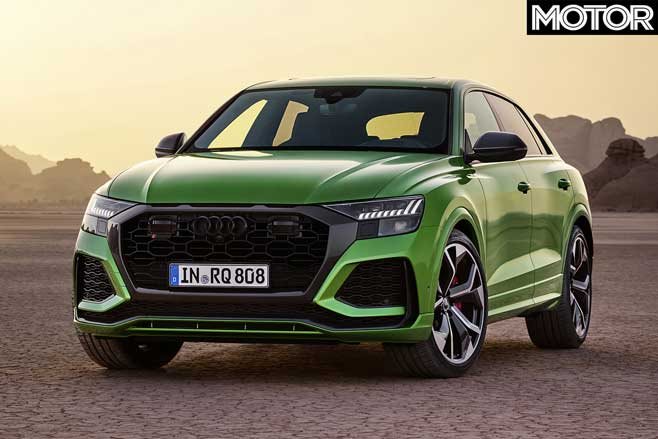 Chassis-wise, the RS Q8 rides on air suspension as standard, in order to keep elements like adjustable ride height – it can drop by up to 40mm when required, or can raise up to provide 200mm of ground clearance – and it also adds electrically activated anti-roll bars that are designed to counter body-roll during hard cornering.

These work via a small electric motor powered by the RS Q8’s onboard 48-volt electrical system, which is mounted in the middle of the two-piece anti-roll bar. When driving in a straight line, the bar is decoupled, which improves ride quality.

When you’re up on the wheel, though, the bars twist in opposite directions to resist roll. It’s clever enough, too, that it can even recuperate electrical energy and feed it into the car’s small onboard battery.

It’s also got all-wheel steering, which tweaks the rears up to five degrees in oppo to the fronts for slow-speed work, and up to 1.5 degrees in the same direction for high-speed stability. 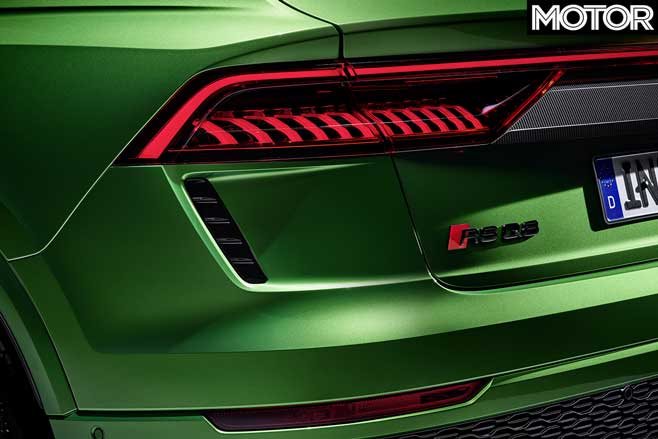 The brakes are monsters, too, with ten-piston front calipers pairing with 440mm carbon-composite front discs (available as an option), with 370mm rears.

Inside, the RS Q8 is futuristic and impossibly stylish, with a large integrated multimedia screen that fades into invisibility when turned off. Top-quality Nappa/Alcantara-clad seats are offset by contrast stitching, extensive use of alloy and brushed metals and LED signature lighting throughout.

And it goes without saying that every driver aid available to Audi finds its way aboard the RS Q8, with more than 30 separate systems combined to keep occupants safe at otherworldy speeds.

Pricing? No indication yet, but figure on it clearing the $200,000 barrier when it touches down here in the third quarter of 2020. 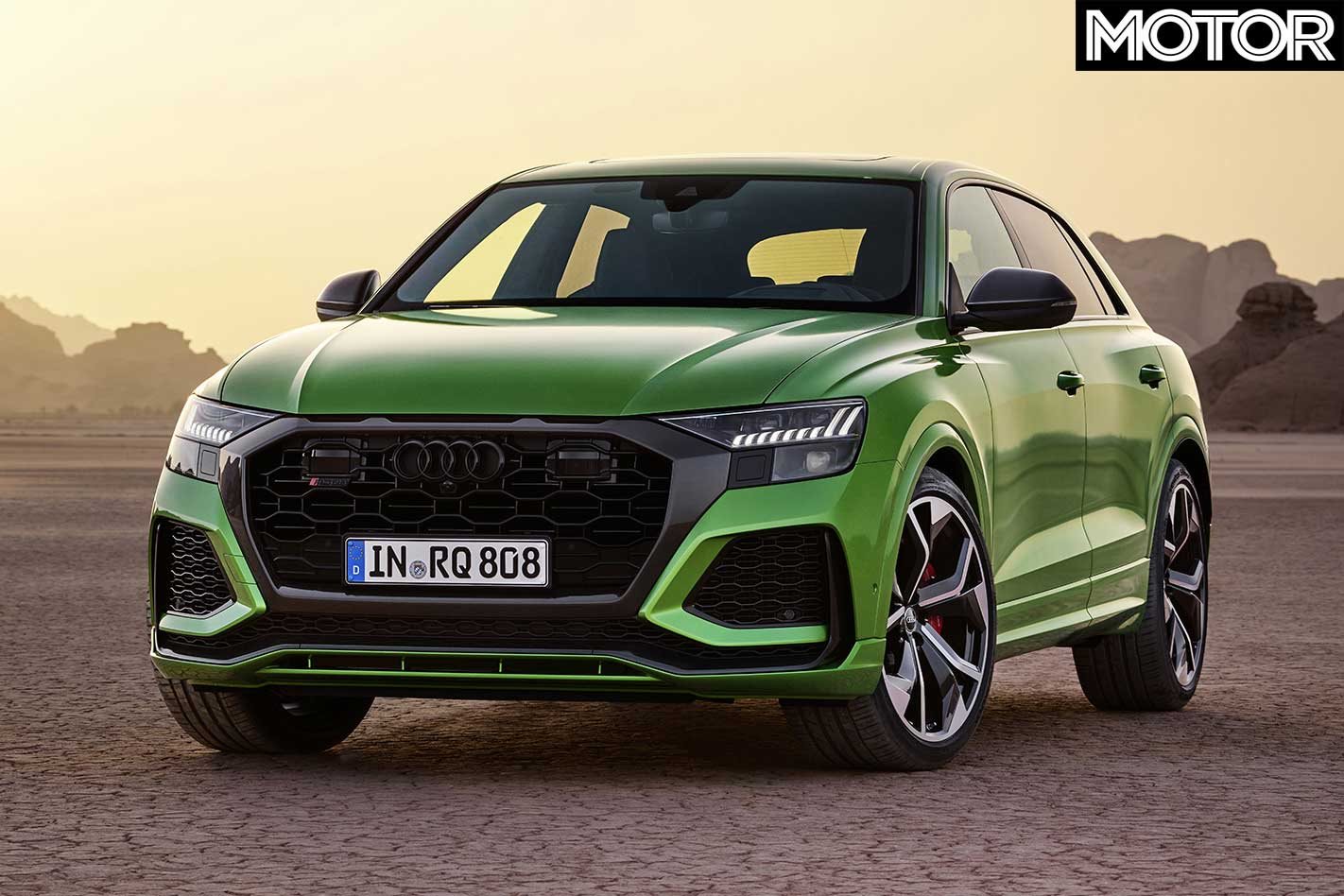 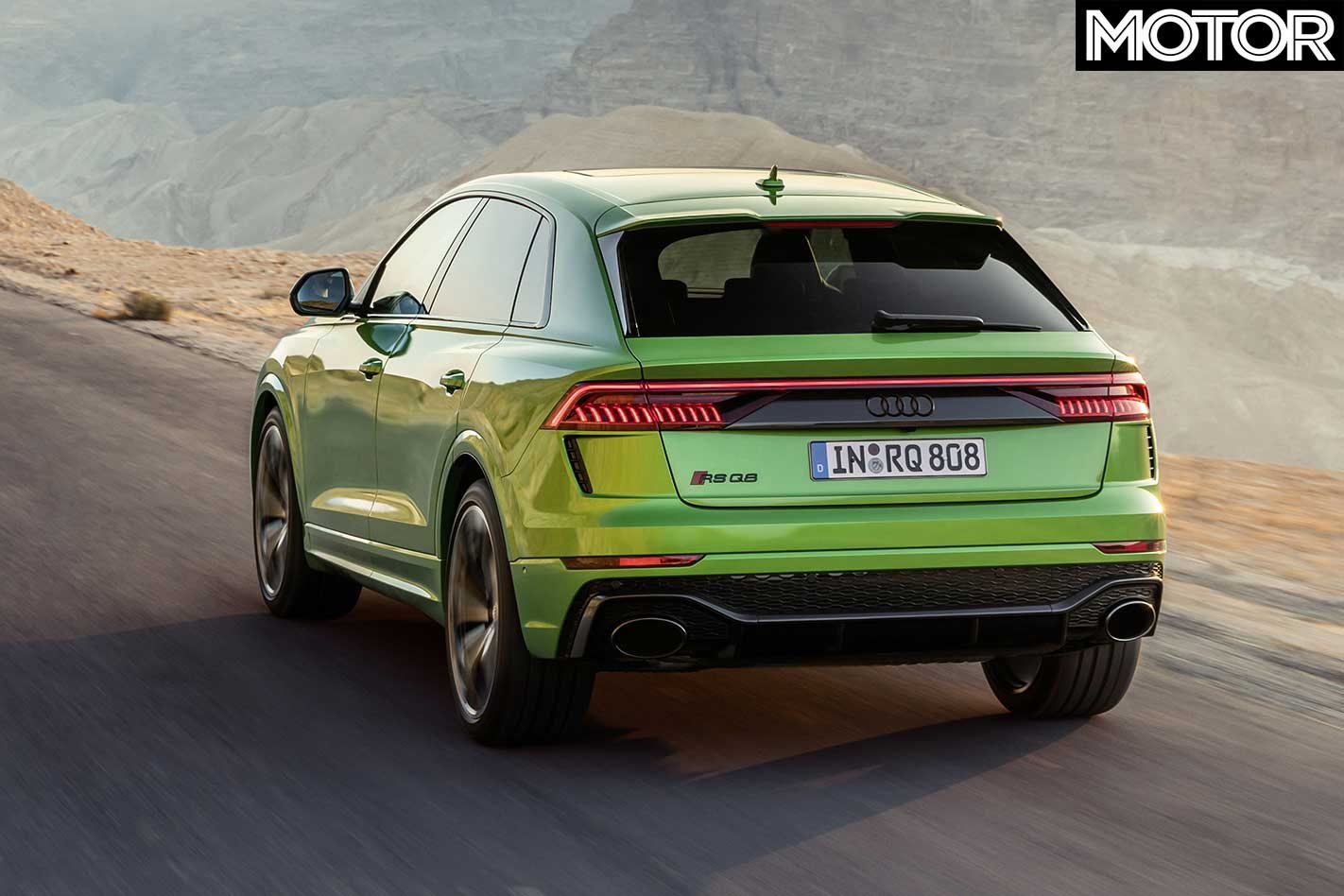 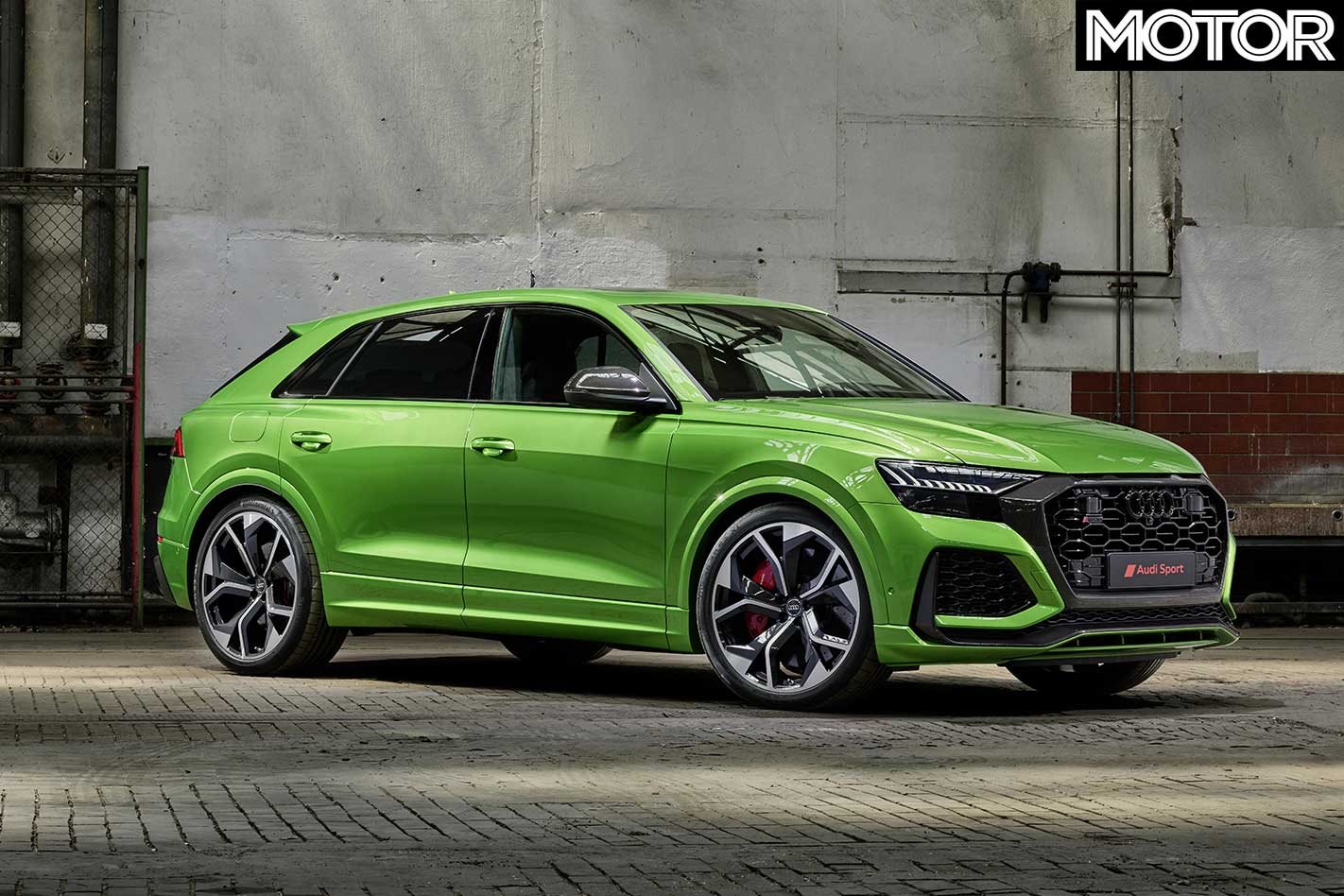 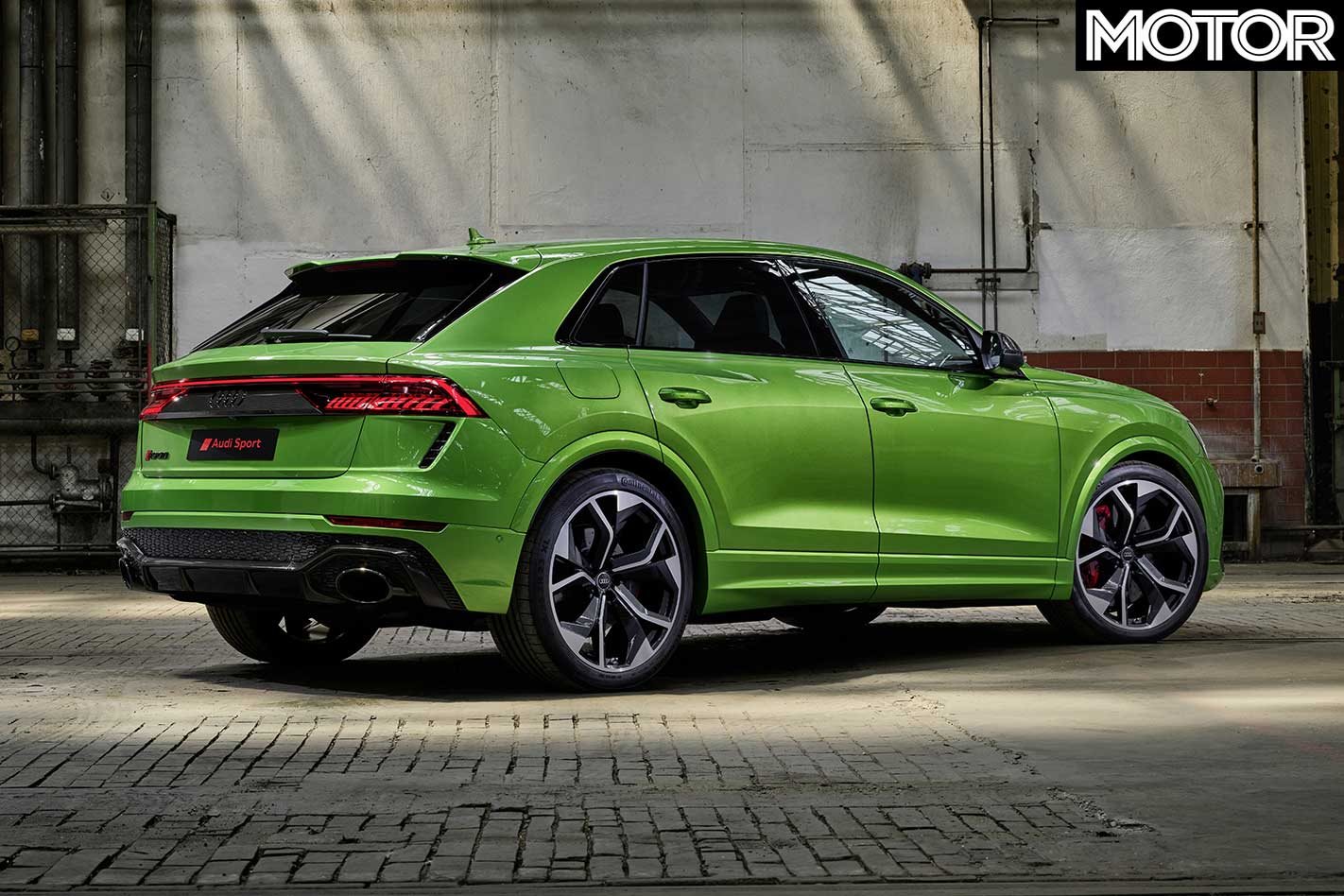 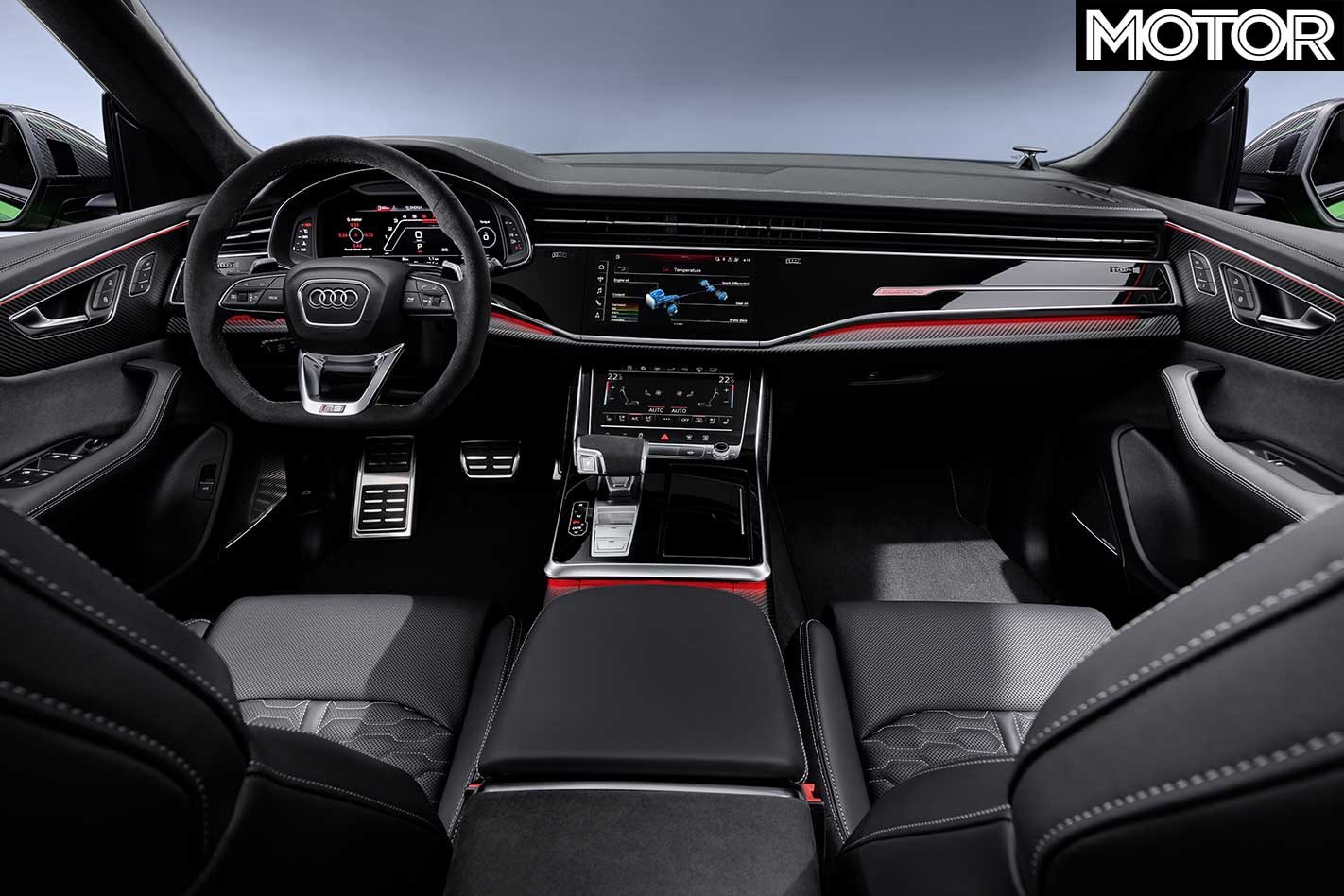 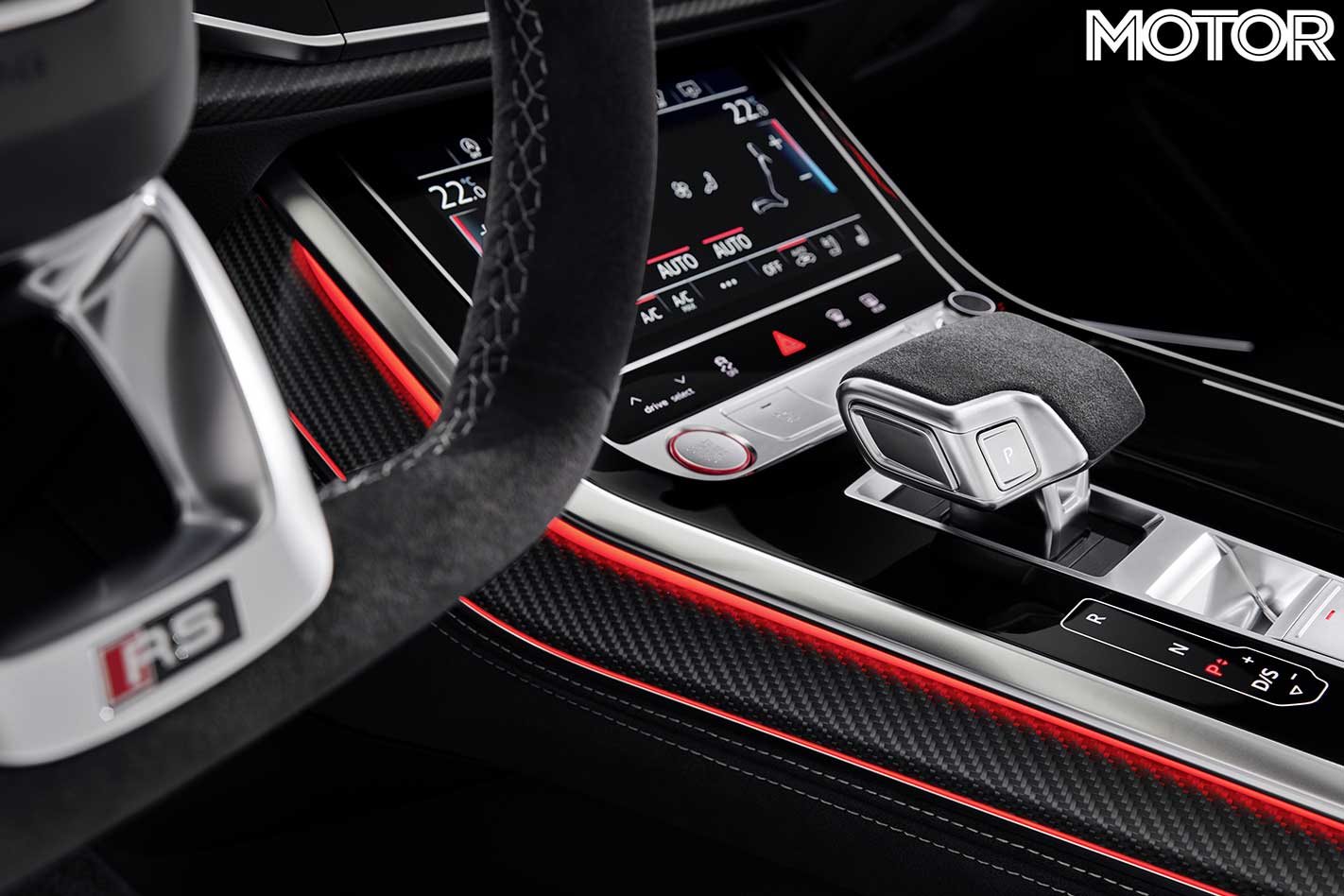 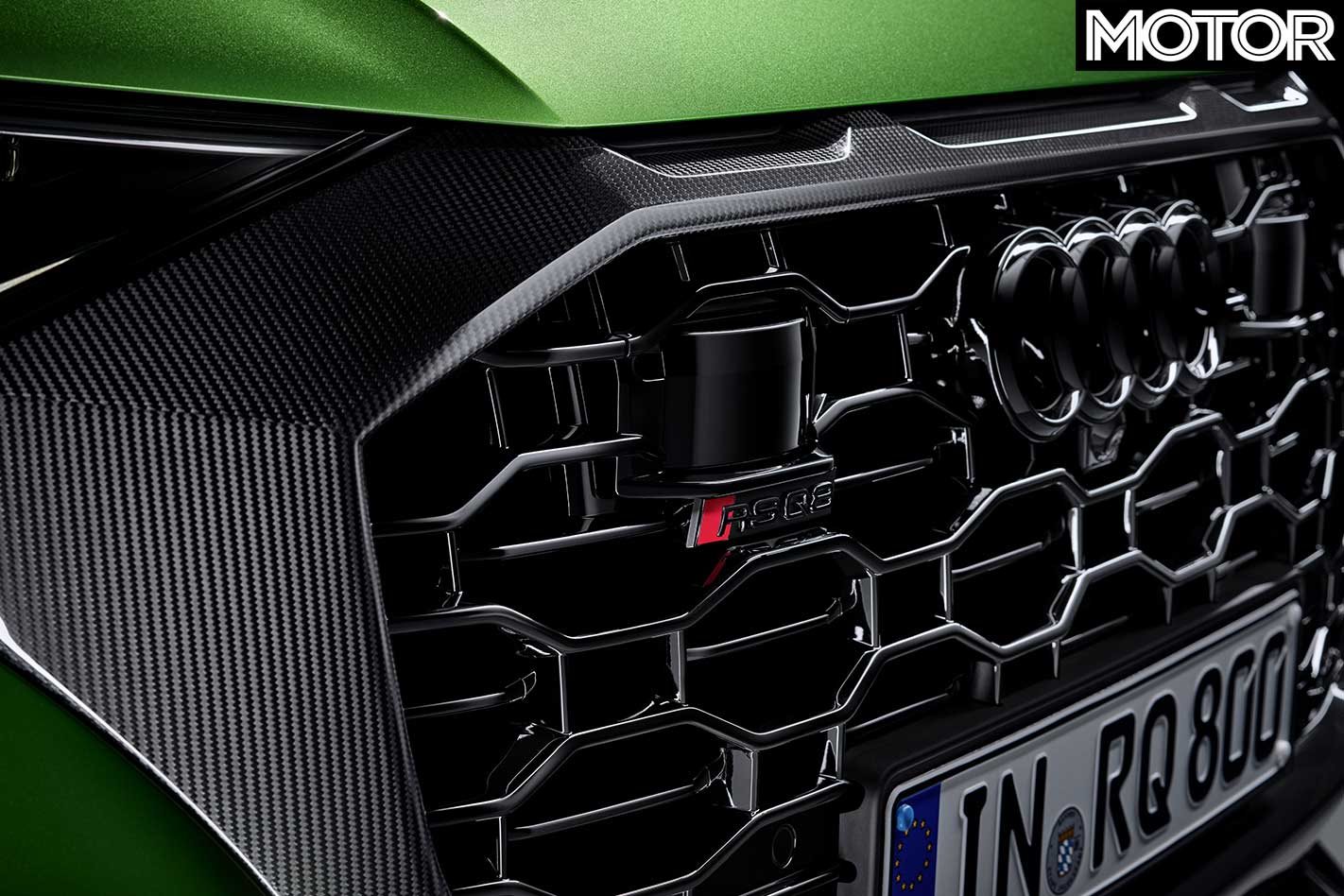 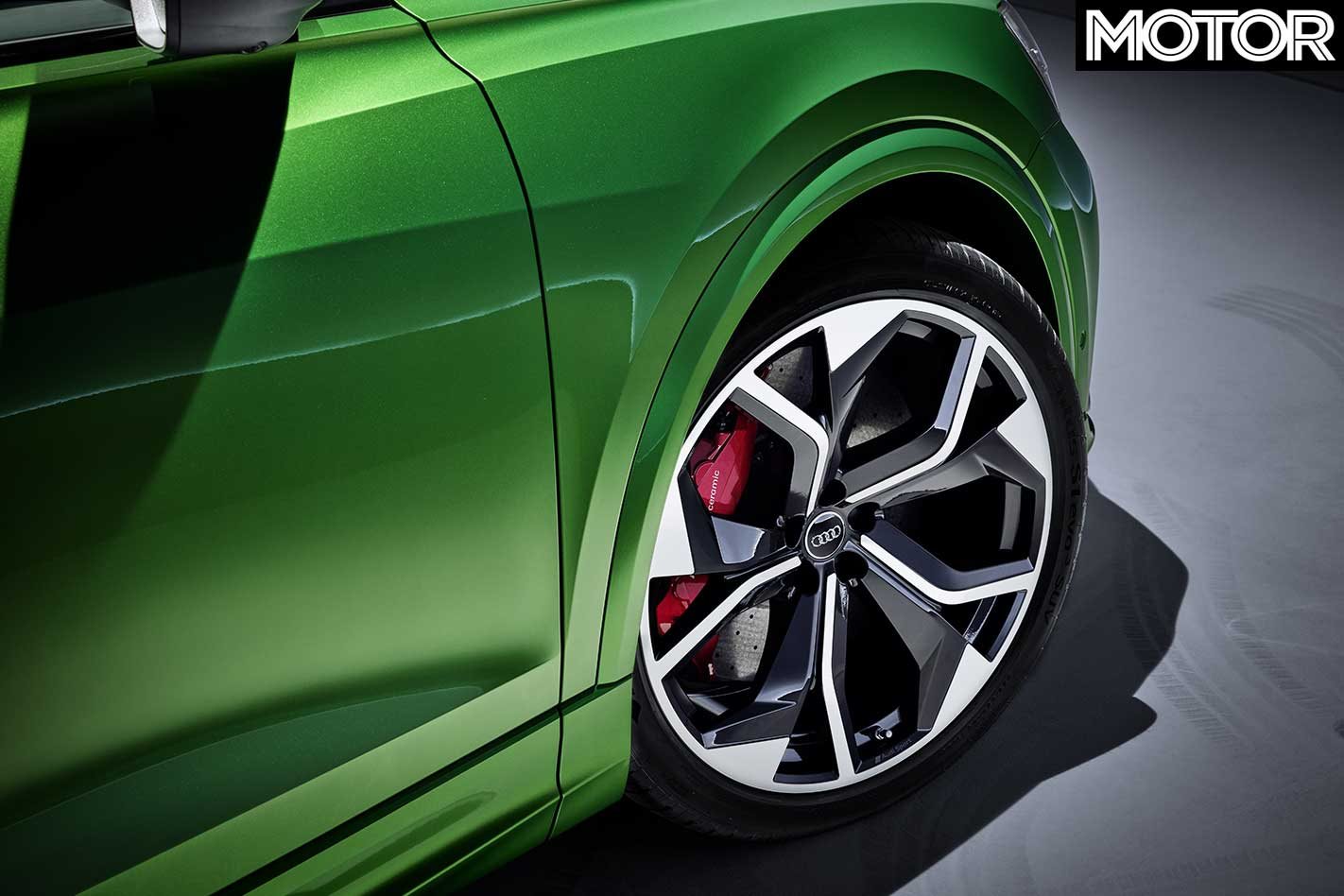 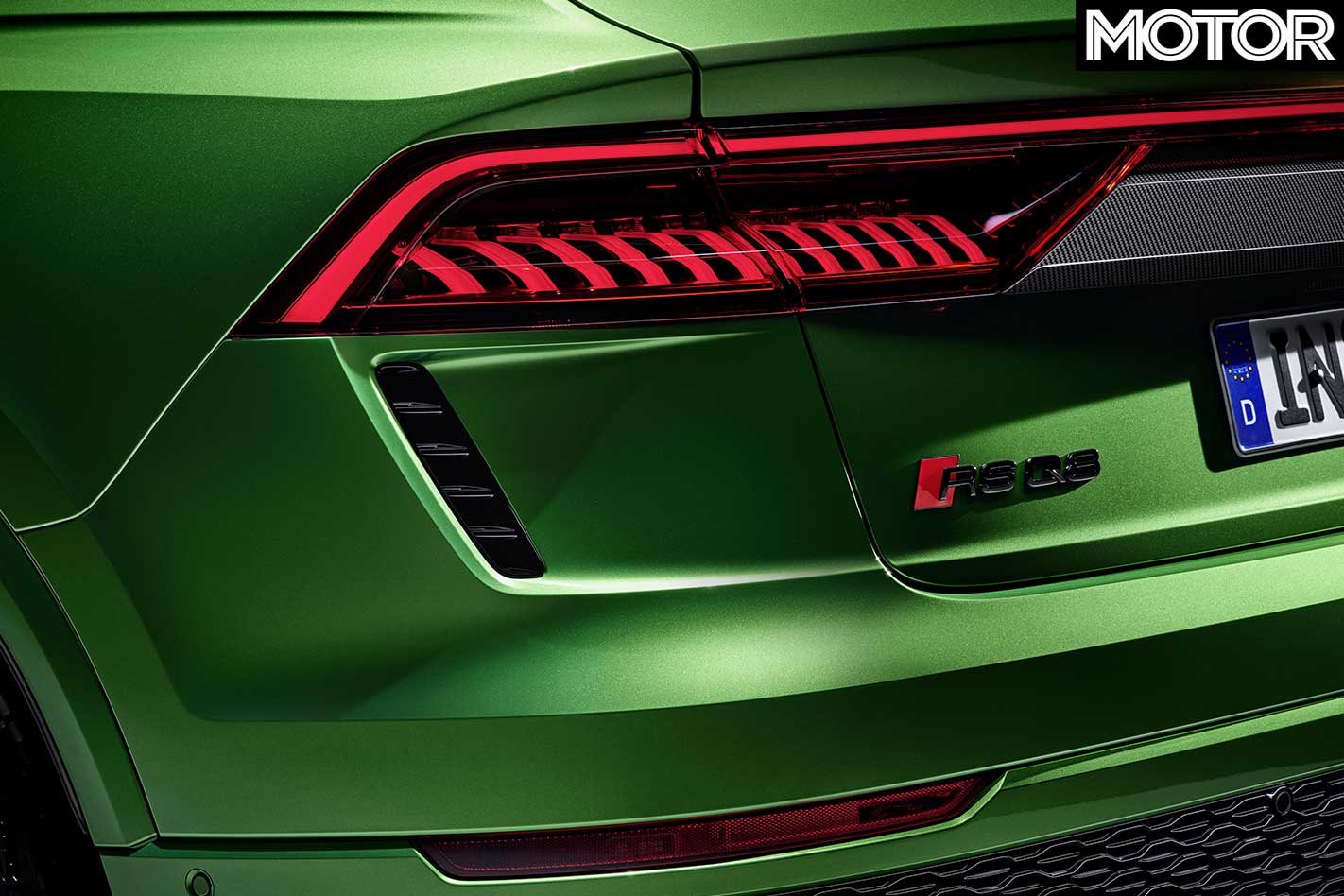