This guy must have been in a real hurry to get to the Flughafen.

Watch this and you’ll be looking up prices for a flight to Germany in no time. How much for a fast rental at the other end?

So you’ve got a ‘lightly modified’ TT RS, and you wanna go really fast. Where can you do it? The autobahn is the answer to that very fun question.

If you want to have a go yourself, we have a few recommendations for you in the form of a handy autobahn guide to 300km/h compiled by MOTOR’s overlord editor, DC.

Here, however, we find one of Germany’s natives, an Audi TT RS (likely circa 2013) soaring flat-out along one of the only places in the world it can (legally) do so.

Behind the wheel is Sandro Ziegler, who we’ve come across before via his Showdown911 YouTube channel. Judging by his past videos, he’s got the skills to pull this off properly.

His weapon of choice is not Audi’s newest TT RS, but the older car is still up to the task of cracking the triple-ton.

If this is a previous-gen TT RS (as far as the interior gives away), it would have originally been 265kW/465Nm and speed limited to 280km/h. This one is not. 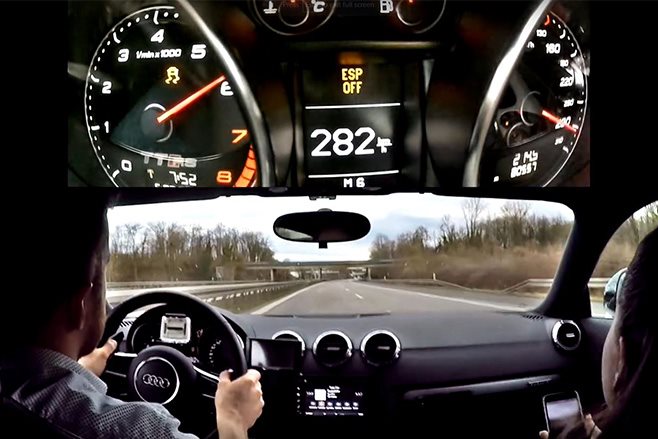 As old mate Ziegler passes 280, he also passes some holidaymakers who look like they’re still motoring along fairly quickly for a car with a roof-mounted carry-case. The autobahn envy is real right now.

Since he has only just shifted into sixth a few seconds earlier, it’s now a case of foot-flat ’til 305. 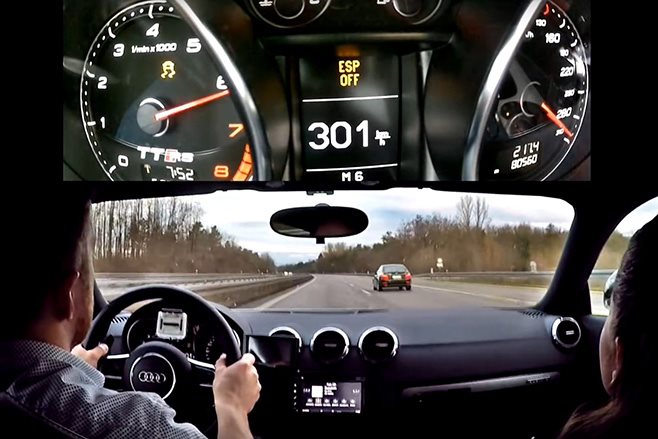 After a very casual 301km/h overtake, the speedo creeps up to 303, before our protagonist encounters a few more cars who probably aren’t expecting a TT RS to fly past on their left at 304… or 305.

A row of travellers (and then another shortly after) witnessed the TT fly past at an astonishing speed of five-over the big three.

But what happens when you realise your exit’s coming up quickly, and you’re still doing 305? You just have to take the exit ramp at 100, apparently. With ESP off. Ziegler’s got this.

Oh, and don’t try this at home. You’ll ruin your driveway.