Tesla founder Elon Musk has finally admitted the ambitious Tesla Roadster has been delayed - and sits at the back of what is now a long product development queue.

Talking on a podcast with US comedian Joe Rogan, Musk confirmed that the Roadster will be prioritised last, after the Cybertruck pick-up and Semi truck, not to mention refreshes for the ageing Model S and Model X range-toppers.

'Roadster is kind of like dessert,' Musk said. 'We gotta get the meat and potatoes and greens and stuff.'

Tipped to be the fastest electric car ever made, the open-topped EV was first revealed in 2017, but apart from a brief concept model shown in Grand Basel, Tesla hasn’t said much about it. Musk has already bragged about its performance, suggesting it’d be able to complete a quarter-mile in around eight seconds. To put that in perspective, most supercars can manage the task in around 10-11 seconds.

The reason for the Roadster’s prestigious speed is partly from its EV powertrain, but mainly from compressed-CO2 thrusters the car will borrow from Tesla’s SpaceX cousin, according to the billionaire. In a tweet, Musk claimed the Roadster would use a, ‘SpaceX cold gas thruster system with ultra high-pressure air in a composite over-wrapped vessel in place of the two rear seats.’

When asked if that meant a sub-8 second quarter-mile time Musk replied ‘no problem,’ adding that, ‘you can basically accelerate at the limit of human endurance.’ 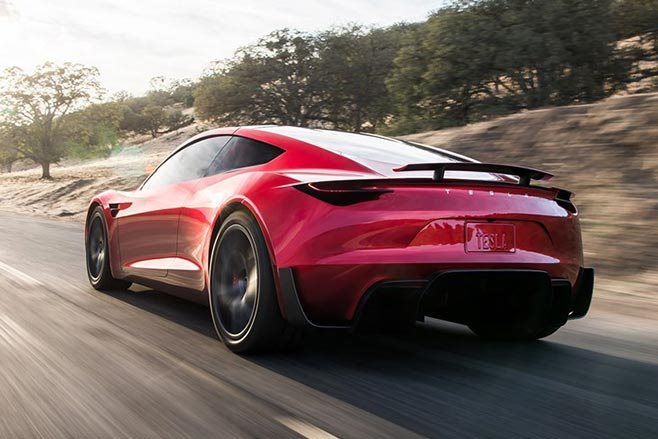 Tesla Roadster: everything else you need to know

For the last few years, Tesla has been building up its own, unique design language, and if the new Roadster is anything to go by, the EV maker has completed its mission. Take one look at the new Tesla Roadster, and you can tell it’s a Tesla - but a faster more aggressive one.

The front end is sharper, with narrow, incisive lights – while the rear is more aggressive, too. Clean lines mimic that of the Model 3, but minimal overhangs and a squat low stance remind you this is an altogether different beast.

The original 2008 Tesla Roadster was based on the Lotus Elise, but this has its own distinct personality.

It looks more like a coupe than a roadster?

It’s really more of a Targa than a Roadster, the roof a removable glass panel that can be stowed in the boot. Unusually for a car of this type it seats four, although the rear seats are small +2 occasional style seats. 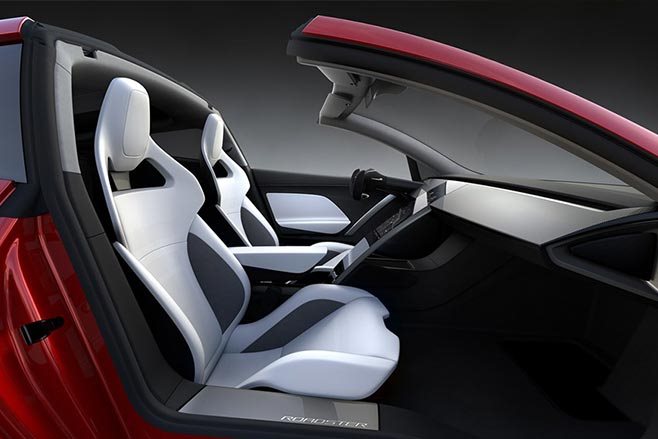 What about the performance?

Tesla claims a top speed in excess of 250mph, an incredibly high speed for an electrically driven car – or a conventionally powered car, for that matter.

Three electric motors, one driving the front wheels and two driving the rears. A 200kWh battery pack provides the juice, and Tesla claims a 620-mile range – presumably at speeds lower than 250mph.

If those figures aren't enough, Elon Musk has floated the idea of using booster jets to increase the car’s 1.9 second acceleration time. In a post on twitter, Musk said Tesla could use COPV thrusters usually found on the SpaceX Falcon 9 jet to help propel the car.

The theory goes that by blowing highly compressed air in different directions, the Roadster will be able to respond even faster – whether it’s slowing, turning or acceleration.

Where is the Tesla Roadster?

‘The air exiting the thrusters would immediately be replenished whenever vehicle pack power draw allowed operation of the air pump, which is most of the time,’ continued Musk in the tweet.

The Tesla CEO also said the boosters will take the place of the two rear seats – which is probably a good idea for both safety and weight distribution reasons. 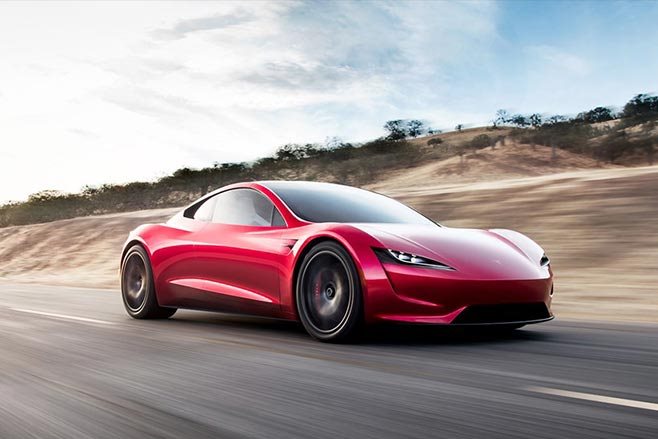 If you fancy a spot on the waiting list, start writing a USD$50,000 deposit cheque now. Full price will be around the USD$200,000 mark, with the first ‘Founder Series’ cars off the production line costing USD$250,000.

Australian pricing is hard to estimate based on US figures, but a direct conversion puts the car north of AUD$300K.

Originally, the plan had been for production to start in 2020, but that is now firmly off the table. No new production date has been forthcoming, so for now the Roadster remains on the wishlist, rather than a definite launch.

One or two have been seen in the wild, though. Tesla chief designer Frankz Von Holzhausen took the new Tesla Roadster out a spin soon after it was first unveiled and he was inevitably photographed by a few members of the public.

As you’d expect from Tesla, a photograph of Von Holzhausen’s test drive of the Roadster prototype was also posted on Twitter.

This story was originally published on CAR Magazine’s website.