MERCEDES-Benz says it is now at the most difficult stage of its development of the autonomous car: working out how to safely hand control back to the driver.

Jochen Haab, an engineer at Mercedes-Benz who is responsible for developing the luxury car brand’s driver assistance systems, says how it will manage the handover from car back to driver is proving more difficult than the carmaker had thought.

“We’re just in the process of working it [transferring driving responsibility from the car to the driver] out,” Haab told Wheels at an introduction to the driver assist technology rolling out in the new E-Class soon due on sale in Australia.

“We’ve had two or three simulators concept tests already, we have a pretty clear picture of how we do it, and our design is coming. And that’s what makes it [moving to the next stage in automated driving development] difficult.

“We’re in the process of the serious development of this thing. It’s not finished yet, and if it was we would sell it, believe me, but it’s a normal development process.” 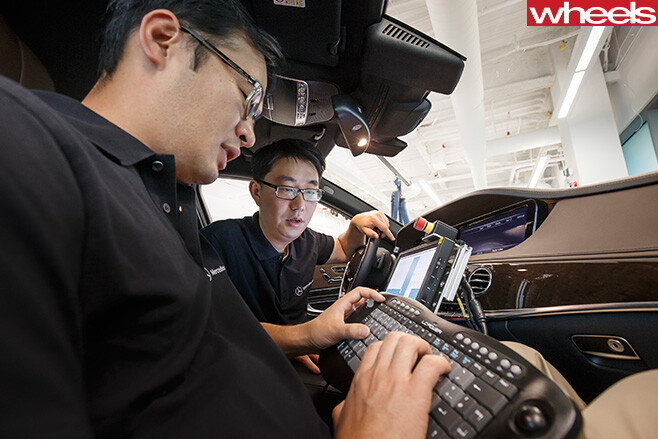 Haab won’t say how Mercedes-Benz plans to signal that the driver needs to take back control of the car, but he is clear that the driver must know in an instant if the car is either driving, or just assisting the driver.

In the e-Class, it uses a green steering wheel that lights up on the dash to show that its suite of technology – which, among other things, will even steer the driver through a lane change – is active.

The carmaker anticipates it will have the next stage of its self-driving car technology ready for the market within two years – the sort of timing that suggests it will coincide with a mid-life refresh of the flagship Mercedes-Benz S-Class as it fights a tit-for-tat battle with the E-Class for techno-supremacy.

According to Haab, the next-gen driver assistance features will allow the driver to perform “limited secondary tasks” behind the wheel. That means working on a laptop, handling a phone or reading a book – but not sleeping.

That would require the development of a system that is able to monitor the driver and ensure that even though he or she is not switched on to the task of driving, they’re still ready to take back control when needed. “We will in the first steps warn you every now and then, and then say ‘Hey, are you still awake?’, and if not stop the car,” Haab said.

“And if you say ‘Yes, I’m here, I’m sitting behind the wheel,’ you’re still there, you’re in the loop, you’re allowed to do other things that you can stop doing, say, inside five to 10 seconds.

“So if we look into the future, we are confident we can deal with the situation for the next five to 10 seconds, let’s say.

“And if something really unexpected happened — let’s say you have a radar failure — you would still be able to drive the car safely for those five seconds, so you would need to have redundant systems, which we don’t have yet.”

That five to 10-second period is an important one, he says, because it gives the driver time to stop what they’re doing, free up their hands, and take back control.

According to Haab, Mercedes-Benz’s technology is already at the stage where a car could drive by itself, but the systems in use today lack redundancy – failsafe back-ups – if anything such as a camera or a radar stopped working – which it would need before the next big step in autonomous driving becomes a showroom reality. “The car itself [Mercedes-Benz’s new E-Class] is capable with its hardware to drive autonomously, we’ve showed that with this car just with different software,’ Haab said.

“But we ignored the necessity of parallel systems or backup systems, and just turned off the hands-off warning and we turned off the thresholds for the steering at higher speeds.

“We showed that this year at the CES [the annual Las Vegas-based Consumer Electronics Show] — the car itself would be capable of [driving autonomously] but we wouldn’t do that because we don’t have the backup system that is necessary for it,” he says.

“That first step — driving autonomous under certain conditions on certain roads at certain times or if there’s enough traffic around and at certain speeds, of course — you’ll see that within at least the next model roll-out, let’s say, so a couple of years down the road.”

That points to the mid-life facelift of the flagship S-Class limousine, which is expected to gain a significant makeover in about 2018. Its rollout to other models in the Benz showroom will follow swiftly, Haab says.

“We’re through with the roll-out of generation three [of Benz’s driver assist technology], and we’ve just started gen four, so the next one to get it — which is just about to be rolled out actually, we’ll see the press release in September I believe, the [E-Class] station wagon — then we’ll have it in the coupe, the cabrio, and then of course next year in the S-Class.

“Gen five is a couple of years down the road.”