I’ve seen gear like this across the online space for a few years now; branded racing harnesses and other parts at prices 50 percent lower than what they should be.

At first glance, the parts appear to be pretty legitimate… but it’s what you can’t see that just might kill you.

A racer in the US has illustrated in the most graphic terms what fake gear – in this case, his racing harness – can result in. After a brake failure, the driver hits a barrier head on in his Mustang, resulting in a catastrophic failure of his harness.

A racing harness is designed to do two jobs; to hold a driver firmly in the seat so as to maximise the connection between driver and car and - more importantly – to secure the driver in the safest position possible in the case of a crash.

Ideally, it should be used as a part of a wider safety system that includes a fixed-back racing seat and a rollover protection structure, and when properly implemented, it should stop the driver from ‘submarining’ out from under the lap belt or ejecting up out of the shoulder belts.

In the case of the Mustang driver, he unfortunately does both, thanks to the failure of at least one of the harness’s retention clips.

The harness in question is branded as a Sabelt, one of the best known seatbelt manufacturers in the industry – but upon closer inspection, the belts themselves are nothing more than a cheap knockoff. 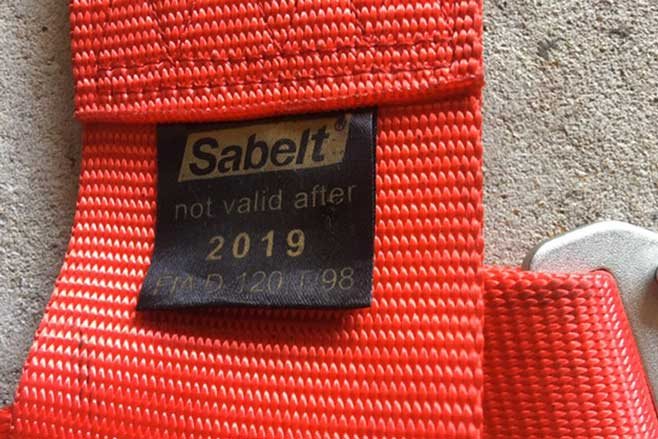 The harness clip that failed is visibly different to a factory item, for example, while other elements including the rotary buckle are also not the same as the factory item.

‘This isn’t a racing car website; why should I care?’ I hear you think. Well, I think education is key, and anyone who has an interest in performance cars should know enough to look after their own safety, or that of others.

You might, for example, blag a passenger ride in a track car, or think about building something of your own… and in both cases, your personal safety should be your absolute top priority.

The old adage of something that looks too good to be true absolutely applies in this instance. A harness is a primary safety device, and it could literally mean the difference between life and death. That people could even think to create a cheap knockoff of such a crucial part is beyond me. 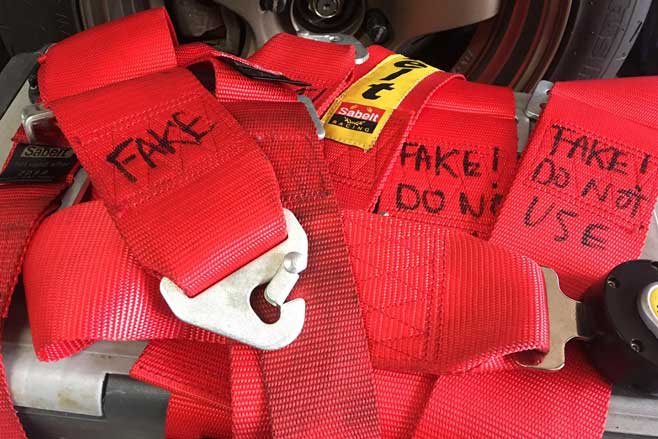 And it’s something that’s directly affected me. After watching the clip and seeing a few belts pass through trading sites online, I thought it would be best to check the passenger side ‘Sabelt’ harness of the little track car that I share with my 17-year-old son.

To my absolute horror, it was the same as the belt shown in the clip. Thankfully, our car has been sidelined for about a year, but the harness – supplied with the car when we bought it – was used by both Max and I over the course of a couple of track days.

I immediately yanked it out of the car. While I’ve labelled it as a fake, I (reluctantly) didn’t chop it all up as Max wants to use it for his racing simulator frame – but rest assured, that harness will be cut into several pieces before it ever leaves our house.

The scary thing is that I consider myself pretty cluey about this stuff – but I had absolutely no idea that our belt was a fake. Upon inspection, it’s easy to spot the differences; no hologram sticker on the label, for example, a much better made buckle and retention clips and much better executed logos and tags.

Racing isn’t cheap at all, and I’m always looking at ways to make our hobby more affordable – but buying fake safety gear is not one. In fact, between the seats, roll cage, helmets, HANS devices and other equipment, our safety has cost more than the actual car.

The best way to protect yourself is to source your gear from reputable suppliers. A good harness, for example, costs no less than $300, which is why a $150 item that looks very similar is so appealing. I don’t know about you, but my life is worth a bit more than $150. 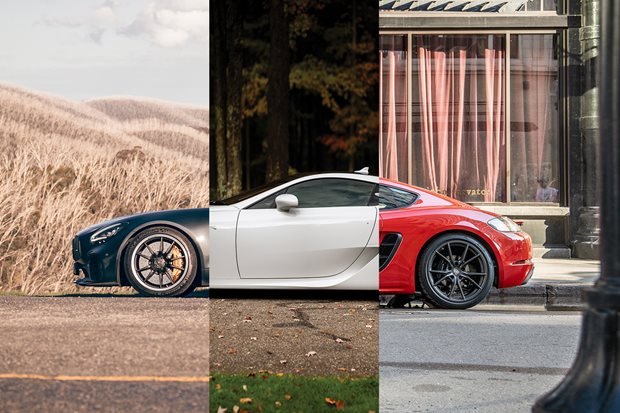