THERE are many ways to squeeze more performance from a vehicle, and a bloke could get lost discussing the pros and cons of everything on offer, from minor performance upgrades to major hot-ups.

Usually your best bet depends on what it will be used for in the end. ‘Short distance’ vehicles – perhaps used for racing or weekend warrior stuff close to home – can be cammed up and hot-rodded to the point of blowing up, because if they do pop, it’s just a short ride home to the workshop.

It doesn’t matter what anybody says – in my experience, most performance modifications (with the exception of high-flow exhausts) come with a price in the reliability and longevity stakes. Squeeze more power out of something and you’re making it work harder than it was designed to.

Eventually that has to shorten its life, but there are plenty of people prepared to put up with that because more power means more fun! So the safest way to get more power is to fit another engine that was designed and built to make more power in the first place. Thanks to companies like Marks Adapters, it’s possible to whack all sorts of high-powered motors into vehicles that came with more mundane lumps under the bonnet. However, once again, decisions like that should be dictated by what the end use will be. Yes, you could go touring with a blown big-block V8 in your GU Patrol, but it might not be the sensible choice.

With Milo, I went for an engine swap using a 13BT, a turbo charged from standard Toyota four cylinder diesels, and from the same family as the 3B diesels fitted to some of the short wheelbase models. By keeping to the same make and engine family, I figured I could minimise the need for ‘special engineering’ the custom bits you have to make to get an engine conversion working.

We got the 13BT donk – which came from a small dump truck imported from Japan – working in its new environment with standard Toyota bits and only a bit of fresh engineering. There was a fair bit of juggling and plenty of trips to see Fester out at Warrego 4x4 Wreckers, but in the end the gearbox was rebuilt using the longer 3B input shaft; a 3B bellhousing was sourced and the 24-volt components on the truck motor were replaced with 12-volt bits from a 3B.

We used standard 3B engine mounts, but had to shift the mounts on the chassis with some cutting and welding. And, once it was all in the fan, it was so far away from the standard radiator we had to lengthen the shroud by about four inches so it’d suck some air.The plan was to get the engine in with the minimum amount of disruption to the factory way of doing things. The thinking here was simple: in the future, when you break something, you can source the parts to fix it without having to get them made. 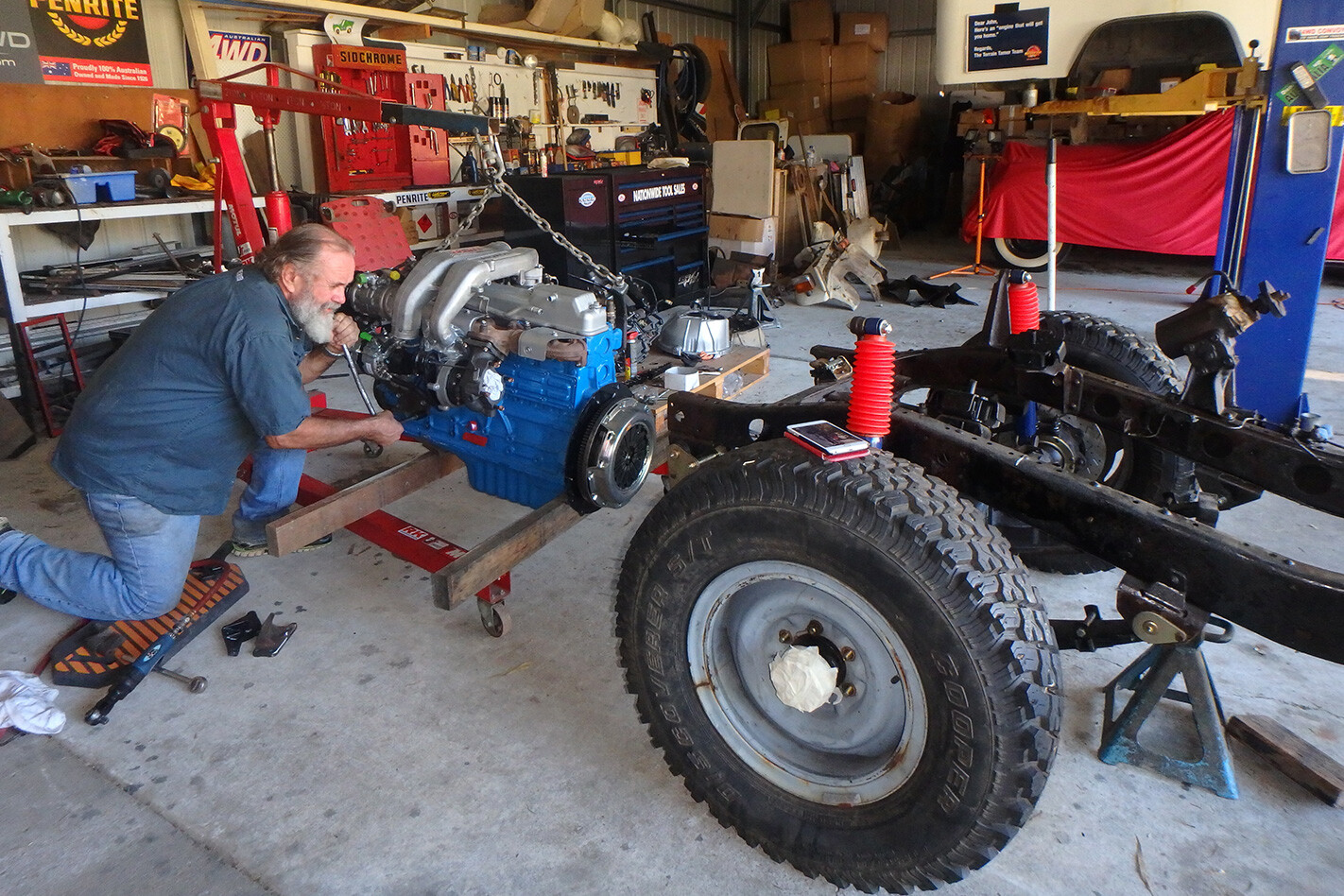 Thanks to Terrain Tamer and a number of old Toyotas all over Australia, there’s no shortage of parts, but it’s not always easy to get something made. Minimise that and you reduce the chance of a trailer-ride home. 750,000km later and the 13BT proved its worth. Being a diesel, it was twice as fuel efficient as the 2F petrol six it replaced, and as a mechanical injection diesel it didn’t depend on electricals. Good thing, too, because there were plenty of return trips where I had to park on hills to start her the next day.

You get that when you do your own wiring. But it wasn’t powerful enough, so I upped the turbo and fitted a non-standard intercooler. It took a while but eventually those big steps away from ‘standard’ wore both the motor and the body out... Err, that and some really lousy tracks.

So, for Milo 2, I learnt enough to choose another Toyota motor that produced a lot more power but still had mechanical injection. That’s the 12HT Terrain Tamer rebuilt while MTQ worked over the pump and turbo. The only problem now was fitting it. Seeing as 60 Series Toyotas used the 12HT, I figured it had to be possible, but a fair bit of research showed people using custom-made engine mounts and all sorts of cutting and welding to get the more powerful motor into the older truck.

Meanwhile, my mate Paul Reid (Mr. Land Cruiser) reckoned he knew a bloke who’d done it using nothing but stock components. We tracked down Chris McConnel, a diesel engineer who works on the big mine machines, and sure enough Chris knew it could be done because he’d done it.

The trick was to find the right combination of mounts and bellhousing. The engine is held in with a mount on each side of the block and one slung under the gearbox. We were also using a 60 Series with the five-speed gearbox instead of the old four, which added another level of complication. 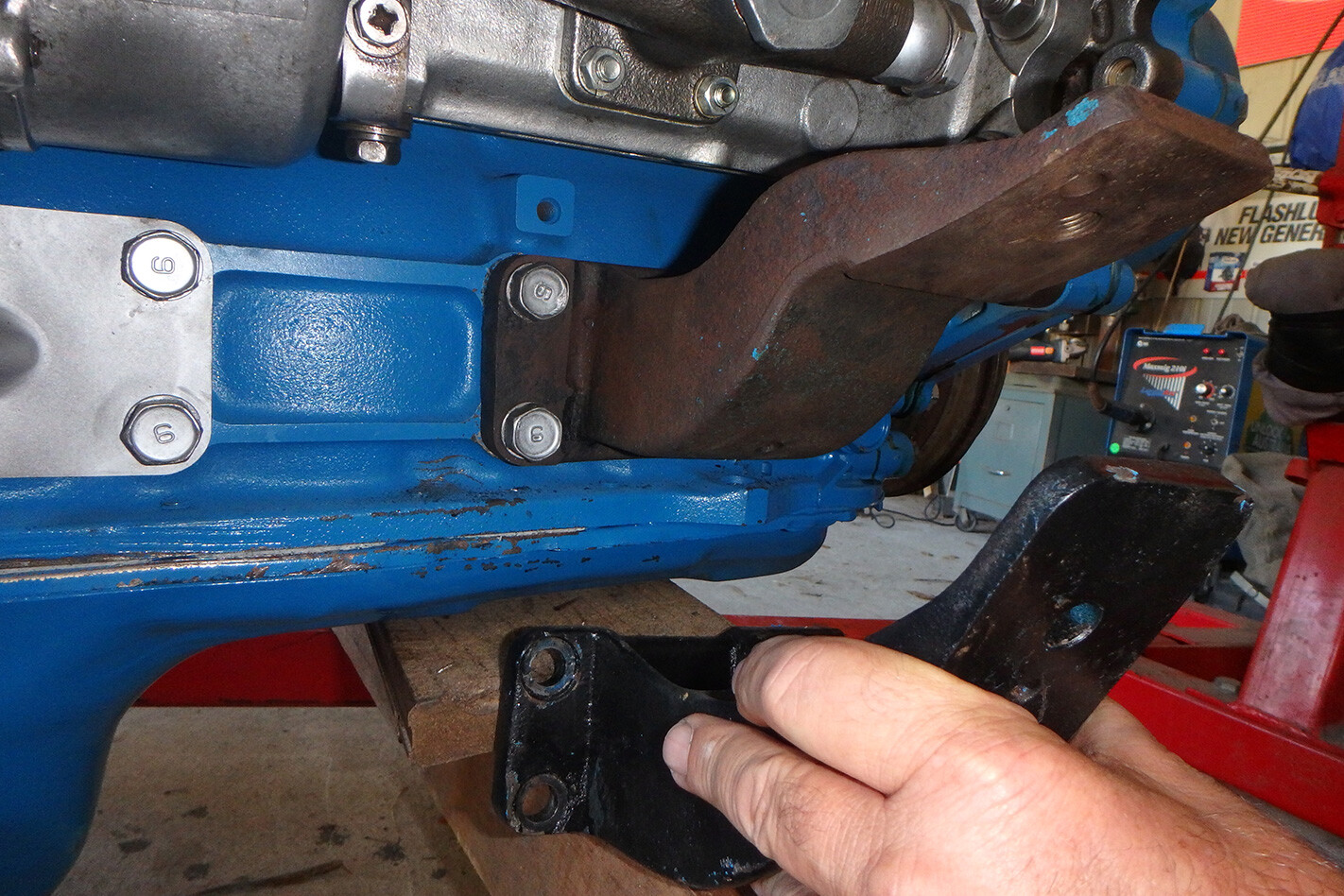 No matter how many messages and photos Chris sent, it still meant assembling heaps of variants and doing some juggling. You see, the biggest trick to any engine swap is to make sure it’s all mounted without any stress. If anything needs bending, twisting or a bit of leverage to get a bolt done up, then that’s going to be a problem down the track. Metal fatigue starts with stress, right?

In the end, I got it in using a standard 2H bellhousing – different to the 12HT job that looks exactly the same by a few degrees of twist – and standard 2H mounts. Then, by taking the three-piece gearbox chassis mount to pieces and rearranging the bits to move the mount backwards, I got that to line up, too. The result? A 12HT from a 61 Series fits a 47 Series chassis with no welding or cutting.

Boy was it a juggle, though. My thanks to Chris who kept sending me texts saying it could be done, and to Paul who managed to find all the parts I needed. Most of all I want to thank Terrain Tamer who, once they knew exactly what year and model bit I was looking for, supplied the usual better-than-original type replacements.

So the motor and gearbox are in. You know what that means? Yep, just add a fruit box and Milo 2 will be out on the tracks before you know it. I can hardly wait. The original Milo was an absolute beauty, but the new girl is copping nothing but the best from the start.