An engine swap gives Roothy a sense of déjà vu.

WHEN it came to choosing an engine for the Milo 2 project, I had to think long and hard. I had to do that for the original Milo, too, but the result was pretty different.

I bought it, but there was no way of knowing other than a compression test which showed the cylinders were reasonably consistent as expected. A few years and 200,000km later it blew the rings off two pistons, but it was such a tough little jigger I made it back from Cameron’s Corner by catching the leaking oil and tipping it back in. 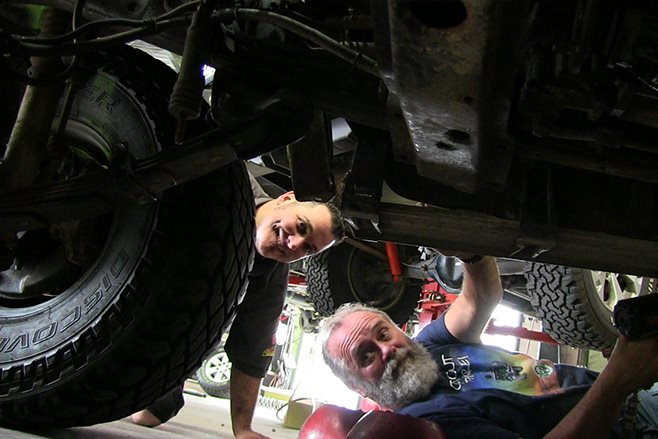 1. If it’s not one thing, it’s another. This time the exhaust is tapping the gearbox, but every time I roll under the car I get trapped. Time to lose some weight.

Terrain Tamer rebuilt it, Alan and I put it back in, and off we went again. It probably needs some work on the injectors now because it idles a tad rough and likes to blow a bit of smoke until warm but, hey, she’s done more than half a million very rough kilometres.

The best insurance to achieve great mileage out of a machine is to use plenty of good oil and filters. I use Penrite HPR 20W-60 diesel oil (blended here in Australia for our conditions) because nobody does oils better than a specialist company. Combine that with Terrain Tamer filters and I reckon I’ll squeeze a few more miles out of that 13BT before it’s rebuild time.

In order to understand the thought processes behind choosing Milo 2’s donk I need to take you through the same processes involved in choosing Milo 1’s 13BT in the first place. First priority, I needed something that’d make reasonable power, because nothing makes touring days longer than a lack of power. Ask someone who remembers the mighty Toyota H motor... yawn.

The old petrol 2F makes about 100kW and 270Nm on a really good day. It would also chew petrol at about 3.0km/L if you worked it hard, making for a range of 200km per tank – not ideal for a touring machine working in isolated regions. That, as well as needing something that’d run underwater, meant it had to be a diesel. But which diesel? 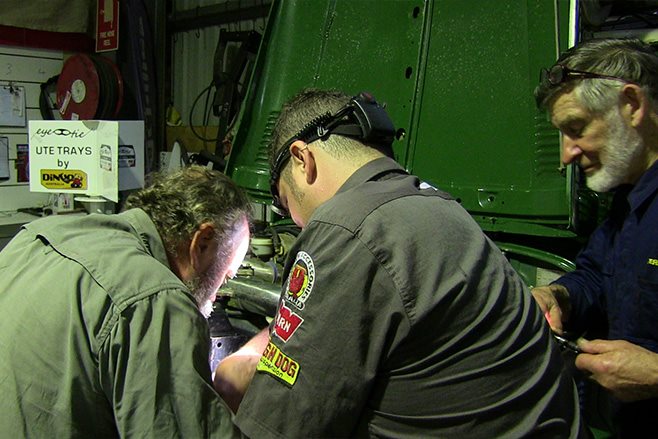 2. All was good until home time, when Milo’s headlights decided not to work. With Nick and Alan to lend a hand we soon sorted it. New lights coming soon!

I’d seen plenty of Chev V8 conversions on Toyotas and, while I love the simplicity and sheer muscle of the big Chevs, I’m not a fan of engine swaps ‘out of the family’. Bunging a diesel V8 into a 40 Series means lengthening the front panels and using adapters on the bell housing – as well as myriad other problems like engine mounts and access to alternators and starter motors. Then if you break down in the middle of nowhere, you’re stuck trying to find that ‘special bit’ that’s not exactly standard.

Here’s another Roothy Lesson learnt early, in this case with a Vauxhall Wyvern on the farm. That Wyvern didn’t make enough power to pull the skin off a pudding, which is why it never broke down. It takes power to break things, ask a drag racer.

So power is nice, but it’s better if it’s gentle. In mining days the most reliable motors we ever had were industrial-type four-cylinder diesels like Perkins J Series motors. Industrial diesels are built tough to work at ten-tenths all day long, with service lives of a half a million kilometres or more. 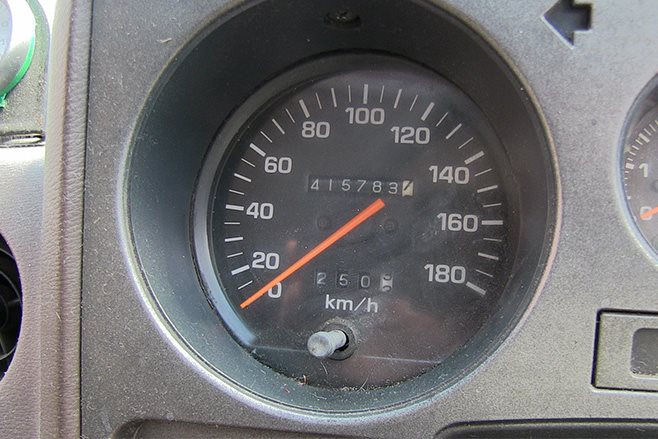 3. The donor 61 Series shows almost 416,000km on her clock, which could be right given the truck’s age and general condition. The motor has only had top-end work, as far as we know.

A bit of mucking around at a wrecking yard and I knew I could swap the old petrol 2H for a 13BT using all Toyota parts, too. The four-speed gearbox would need rebuilding to take the longer input shaft from a 3B and the corresponding bellhousing fitted. Other than that it was just a question of swapping 24-volt truck components for their 12-volt equivalents. There are a few rare Land Cruisers that already run 13BTs, so how hard could it be?

It also required repositioning and welding the engine mounts back into the chassis. So the 13BT won because it ticked all the boxes. In standard turbocharged trim they make 90kW and 217Nm, less than the original 2F but it would only take an intercooler and a jiggle with the turbo to get equivalent power with more than twice the fuel economy.

Fast forward a couple of decades and I’m again looking for a motor to swap Milo 2’s 2F with. Another 13BT would be nice, but Milo’s had some issues: the turbo was almost on the firewall, and industrial direct injection diesels are slightly louder than a heavy metal concert. Ask Editor Matt, (who also owns a 13BT Cruiser), not once have I ever made a successful phone call from Milo while she’s been going. 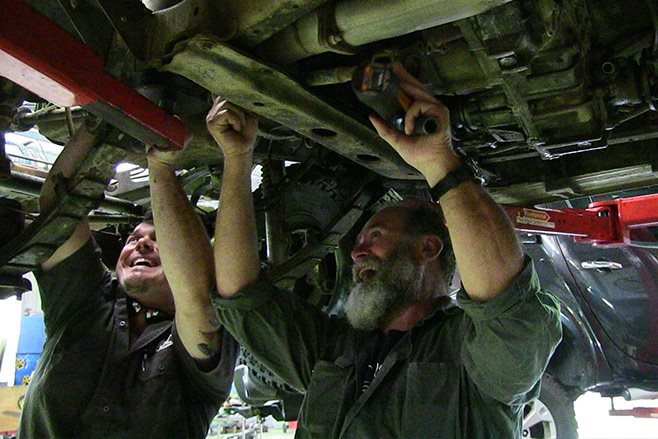 4. There are always a few surprises when you’re shoehorning out an engine, and now it’s the PTO takeoff. At least we’re laughing about it.

For years the big debate in Land Cruiser circles has been which Toyota diesel was the best. Many people reckon it’s the 12HT, an almost industrial derivative of the old 2H that’s a whole lot stronger in construction to suit its standard turbocharger. They’re a straight six cylinder push rod engine with direct mechanical injection running a lower compression – all the good things for longevity. They make a genuine 100kW (even with the stock 7psi boost) and more than 300Nm – specifications that are right up there with that Chev V8, but with nothing tricky needed for fitment. They’re also relatively smooth and quiet, especially compared to a 13BT.

Unfortunately they’re rare – mostly fitted to 61 Series Land Cruisers built between 1986 and 1990 – and in demand because lots of people are looking for non-computerised engines. In the end I found and bought the whole Land Cruiser rather than just an engine. That meant getting the upgraded five-speed gearbox and transfer case. No more four speeds for me.

So all we had to do was pluck it and fit it. We got the plucking done anyway thanks to my mate Nick Flannigan. And I’ve got a feeling we might get it rebuilt, too, before bunging it in Milo 2. Like all good oils, it’d be cheap insurance for a long life. See you on the tracks, I hope.