At Porsche, evolution is typically executed in leaps and bounds.

This review was first published in MOTOR's June 2006 issue

Surprisingly, the new GT3 is every bit as fast, and at approximately $260k it is notably less pricey. The key difference is acceleration. Handicapped by only two driven wheels, by a 48kW deficit and by the vagaries of a conventional clutch, the normally-aspirated batmobile takes 0.6sec longer to catapult itself from 0-100km/h than the Turbo. Although it may be a tad less explosive off the mark, the GT3 is again sharper at the edge and less forgiving overall. 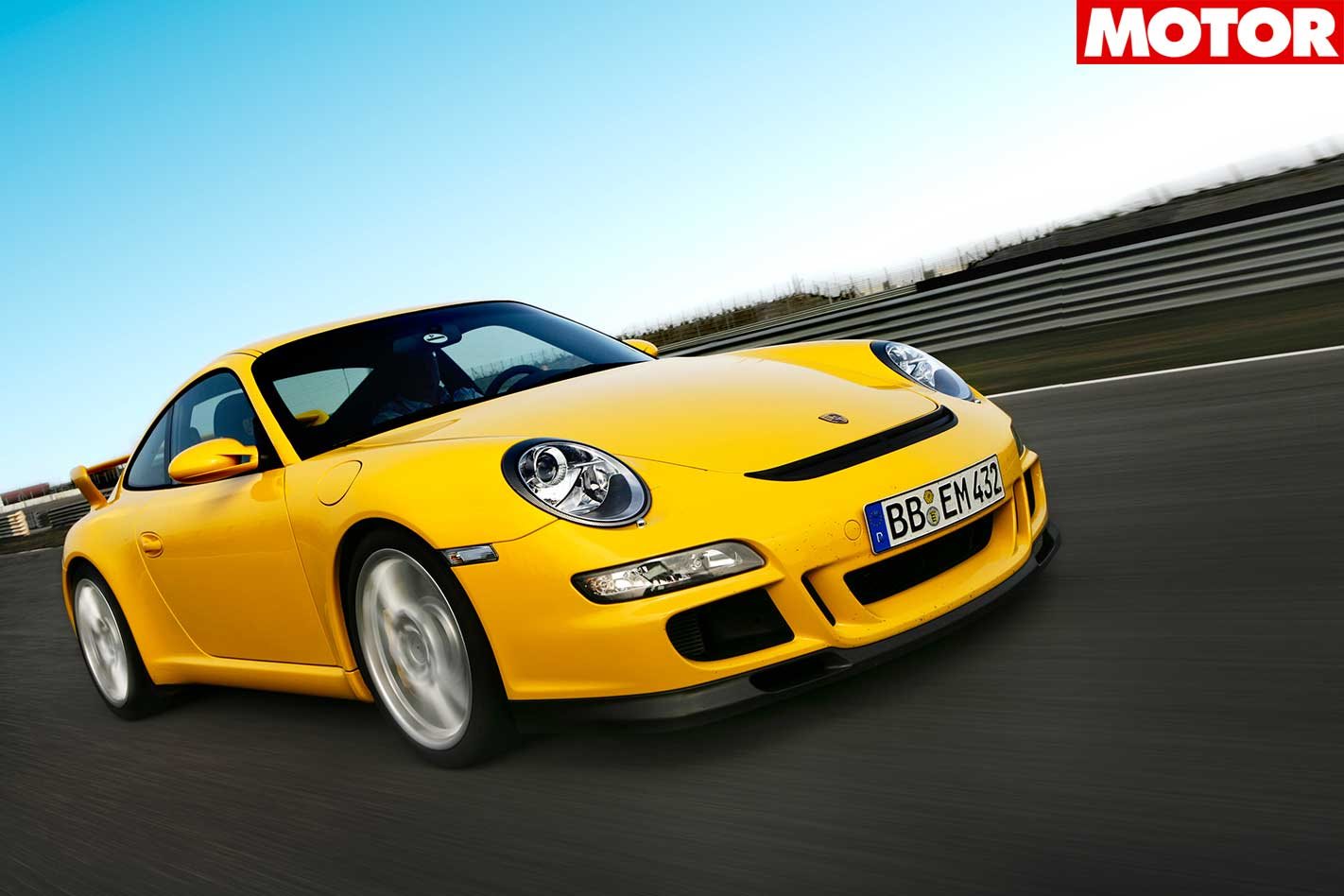 Like its predecessor, it sifts the men from boys. And it does so at a quantifiably higher level, calling for even quicker reflexes, more precise action, and for cohones as big as tennis balls.

The engine sounds louder and clearer than in any other 997. How come? Because there are no rear seats to dampen resonances before they can develop, because sound deadening was not high on the priority list and because the new lightweight flat-six is mounted to the vehicle with a minimum of rubber buffer compliance and a maximum of metal-to-metal rigidity.

As a result, the vibrations at idle speed and the forces of inertia can be sensed through the throttle, the floorpan and the gearlever. “Feels like two spark plug leads have come off…” I theorise. The project engineer Andreas Breuninger does a quick check and shakes his head. “That’s the way they all are. It’s the price you pay for making the moving parts as light as possible,” he says. 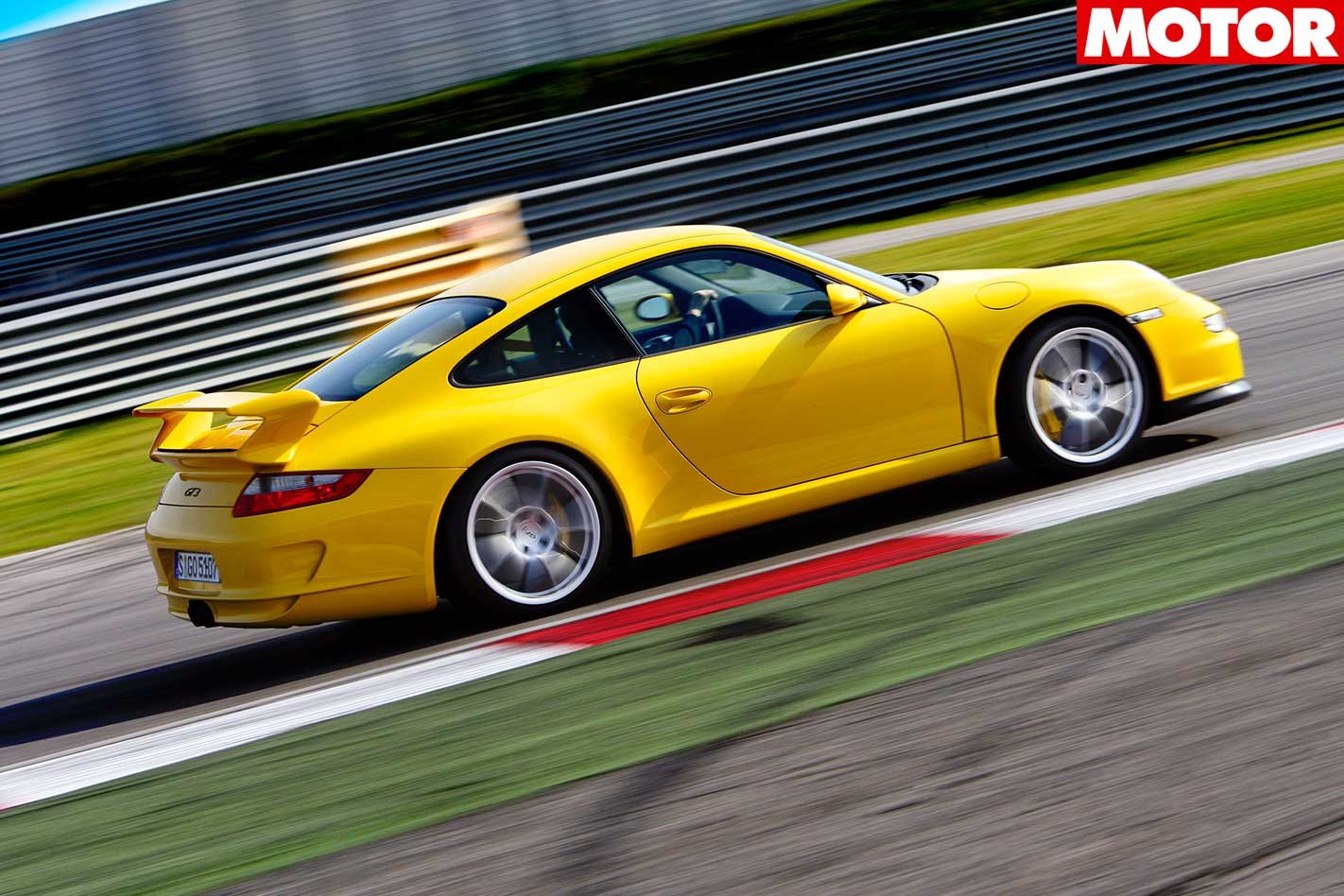 Despite their idiosyncrasies, 911s have become a lot more accessible over the years, and the new GT3 makes no exception. Its variable-rate steering is almost self-active in the way it responds to the most subtle inputs. The throttle has established a telepathic link to the engine. The brakes, even those with ceramic discs, don’t need volcanic temperatures to be in form. The electronics thankfully work as enhancers, not as inhibitors and the chassis is as communicative as things get in a track-day special.

The clutch has abandoned its coal sack spring load in favour of a counterweight which is exactly right for my calf. Only the gearbox does not quite match this give-and-take policy.

Nicely short in throw, it is actually hard work to move the stubby lever from one ratio to the next, and for some reason grinding from second into third is particularly sandy. There’s no alternative to the close-ratio manual, but Porsche is working on a twin clutch arrangement with paddle-shift actuation. The Weissach grapevine suggests that this trick ’box might be available in sync with the 911 GT3 RS, which should put in an appearance in early 2008. 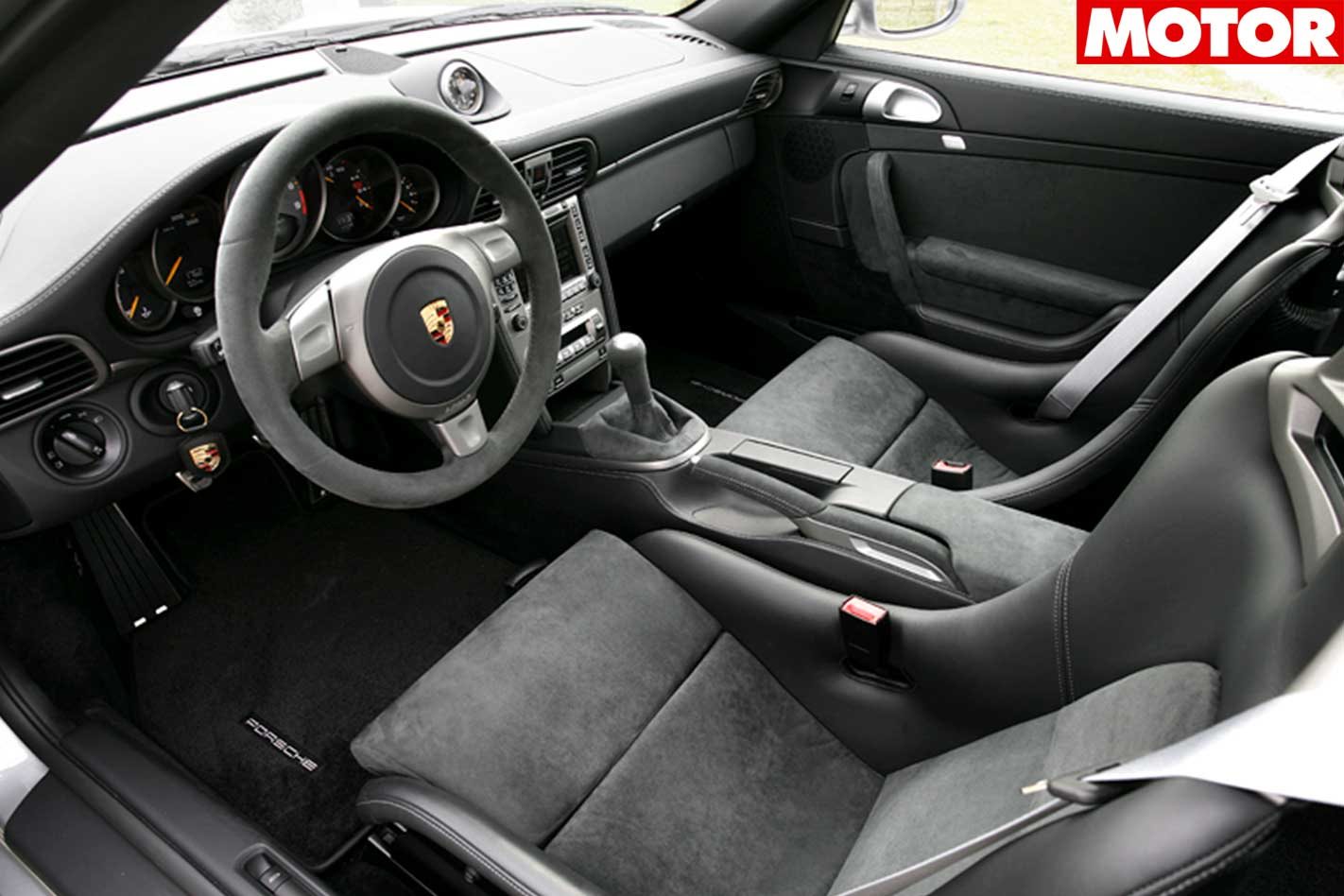 Like every 911, the GT3 is a sports car built around an engine. Installed aft of the rear axle where the law of physics exists only as an appendix, the 3.6-litre unit is an evolution of a very special boxer which started life in the awesome GT1.

By taking weight out of the pistons, the conrods and the crankshaft, the engineers raised the redline from 8200 to 8400rpm. Other measures include an increased compression ratio of 11.0:1, improved cylinder-head cooling, double valve springs, a stepless camshaft adjustment device, a new intake manifold with three resonance chambers and a free-flow exhaust with two-stage silencers.

When fully open, they reduce the back pressure under trailing throttle by eight percent. To feed as much air to the engine as possible, the ram air scoop on the rear lid has been enlarged and enhanced. The intake plenum possesses three lungs. 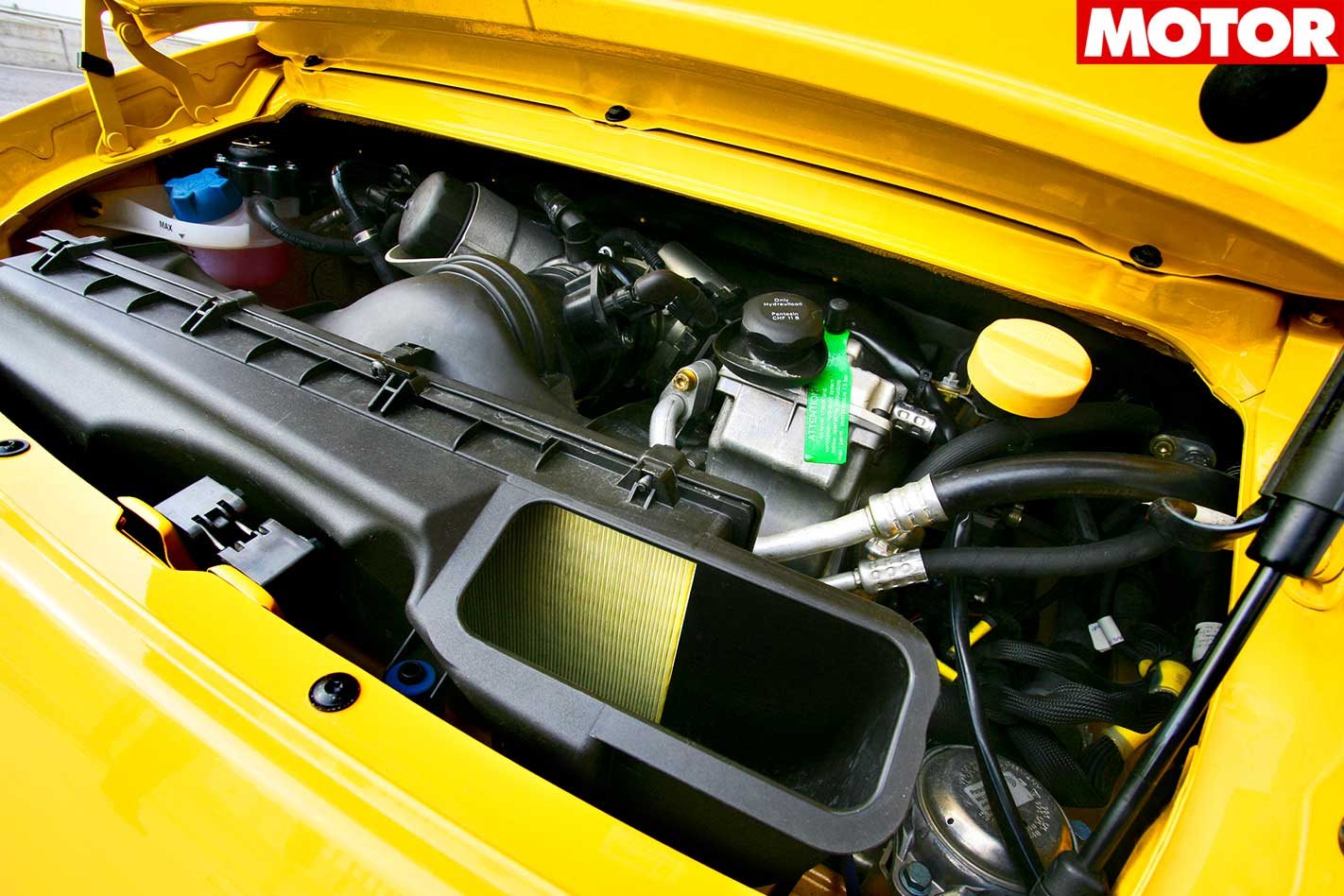 Below 5400rpm, only the smallest breathing apparatus is on duty. Between 5400 and 6350rpm, a flap opens and allows extra air to circulate and to boost the torque flow. Above 6350rpm, the entire manifold takes deep breaths of oxygen, generating maximum twist action and power.

“The GT3 is an emotional sports car that deserves an emotional engine and exhaust note,“ claims Breuninger. Sure, but we were thinking more rumble and roar than boom and drone. “Mid-range, this unit is indeed acoustically quite present, but above 200km/h engine noise is no longer an issue.” Quite. Because by then wind noise and road noise will have joined to form a new band which is more about group performance than about solo artists.

Like the M3, the GT3 sounds positively heavy metal as it approaches its top speed, playing a compact surround-sound tune which only varies in tone and volume but never in melody and rhythm. 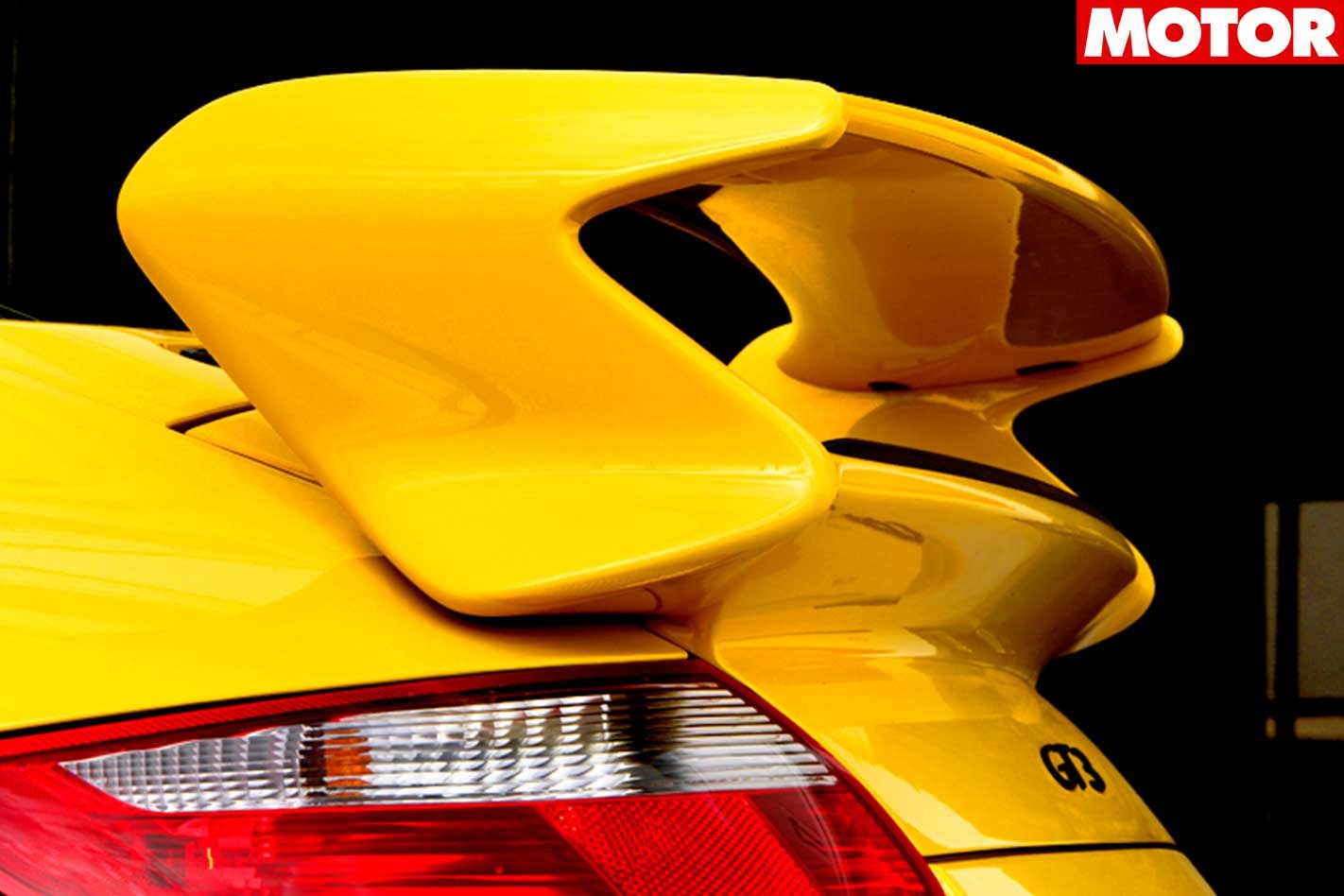 The flick-and-click transmission is 15 percent quicker than in the old GT3, and it also is shorter-legged as far as the top five ratios are concerned. To avoid hitting the rev limiter, an upshift warning light makes you reach for the lever just in time. The zero lift aerodynamics keep the nose firmly planted on the ground, even if that ground happens to be part of a poorly maintained Italian autostrada.

Much more so than in any 996, directional stability is a gentlemen’s agreement between the trusting driver and the trustworthy car. No, the new GT3 is not a white-knuckle experience. Even though its nose does pitch and yaw and wander when conditions force it to do so, corrections at the wheel are the exception to the rule, and this also applies when the 90 litre tank is almost empty. 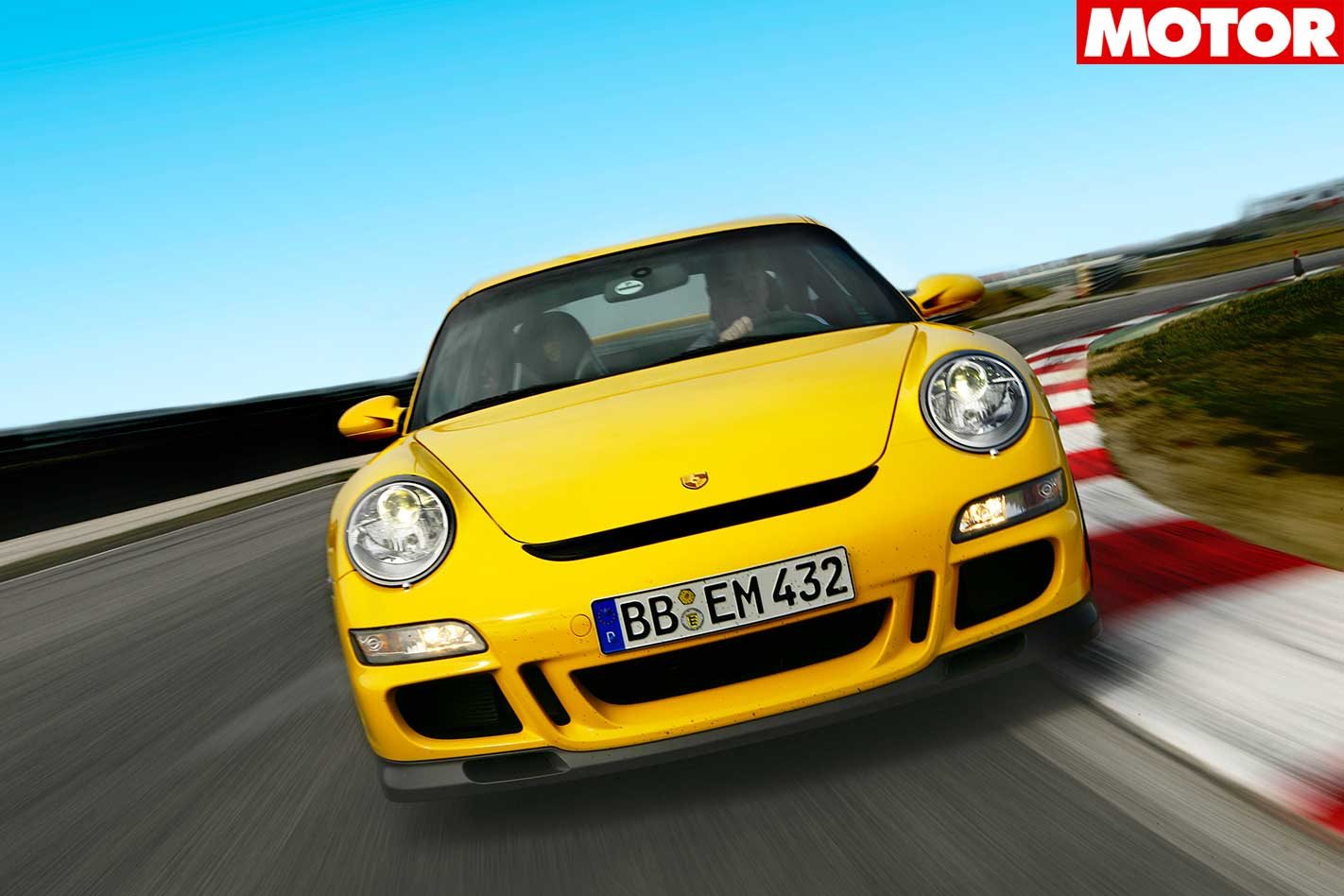 Fitted with the PASM active suspension, this Porsche opens a new window to tactile modulation. This time, the extremes are not labelled ‘comfort’ and ‘sport’, but ‘stiff’ and ‘very stiff’. The standard set-up, taut and precise on the road, switches to totally dedicated zero-tolerance on the track. We drive the car on the Adria Raceway near Venice which is flat as a tack, extremely grippy and an odd mix of fast straights and slow corners. In this competitive environment where poise and accuracy are of paramount importance, the GT3 turns out to be a real eye-opener.

Dial in Sport mode, and brace yourself for a drive along the limit which is both quite safe and totally rewarding. Sport does not only adds a dash of cement to the shock absorber cocktail, it also sharpens the throttle response, delays the interference of stability control and frees an extra 25Nm and 10kW between 3000 and 4250rpm by reducing the exhaust back pressure.

Equipped with newly developed Michelin Pilot Cup tyres (235/35ZR19 in front, 305/30ZR 19 out back), even the basic grip is reminiscent of a magic formula conceived by Velcro, Wrigley’s and Loctite. This superglue performance enters an almost superhuman level once the semi-slicks have reached their working temperature. 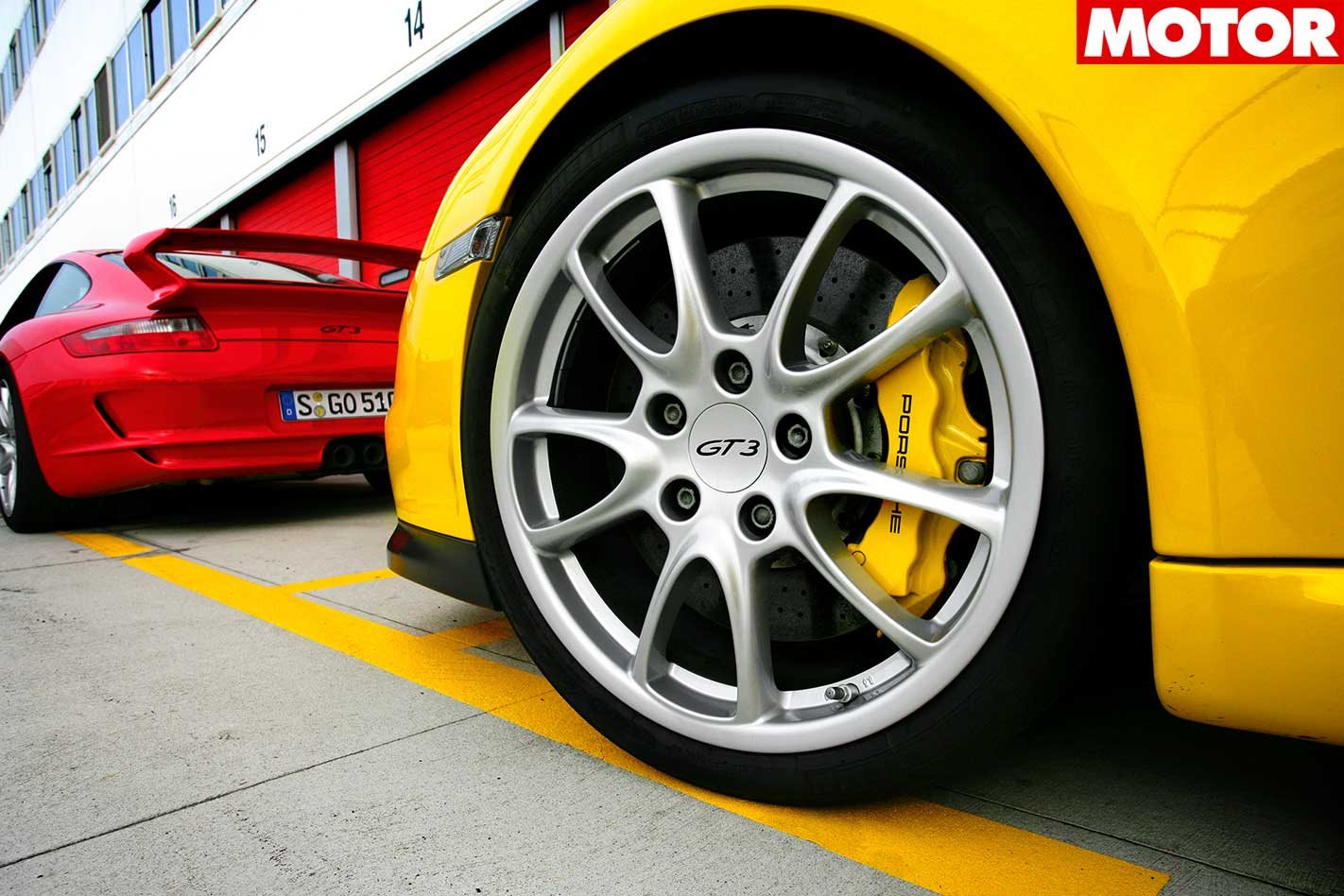 In combination with the riveting ceramic brakes, you could hit the middle pedal beyond the point of no return and still clip the apex. But hot front tyres mean early understeer, so it’s best to make both ends of the car work by maintaining a steady flow and by choosing a line which kisses the kerbs where appropriate and stays clear of them where not.

In Sport, you get all the fun and 90 percent of the speed without running the risk of overcooking it. Switch off TC, and instantly the car will feel a lot more loose. It wags its tail under brakes, ploughs ahead with determination through the tight right-hander, corners with slide-upon-request attitude.

But make no mistake: the turn-in, lift-off, power-on sequence is now even more aggressively staggered than before, so in addition to spot-on dosage and timing, you should make sure you bring along plenty of experience and a sixth sense. 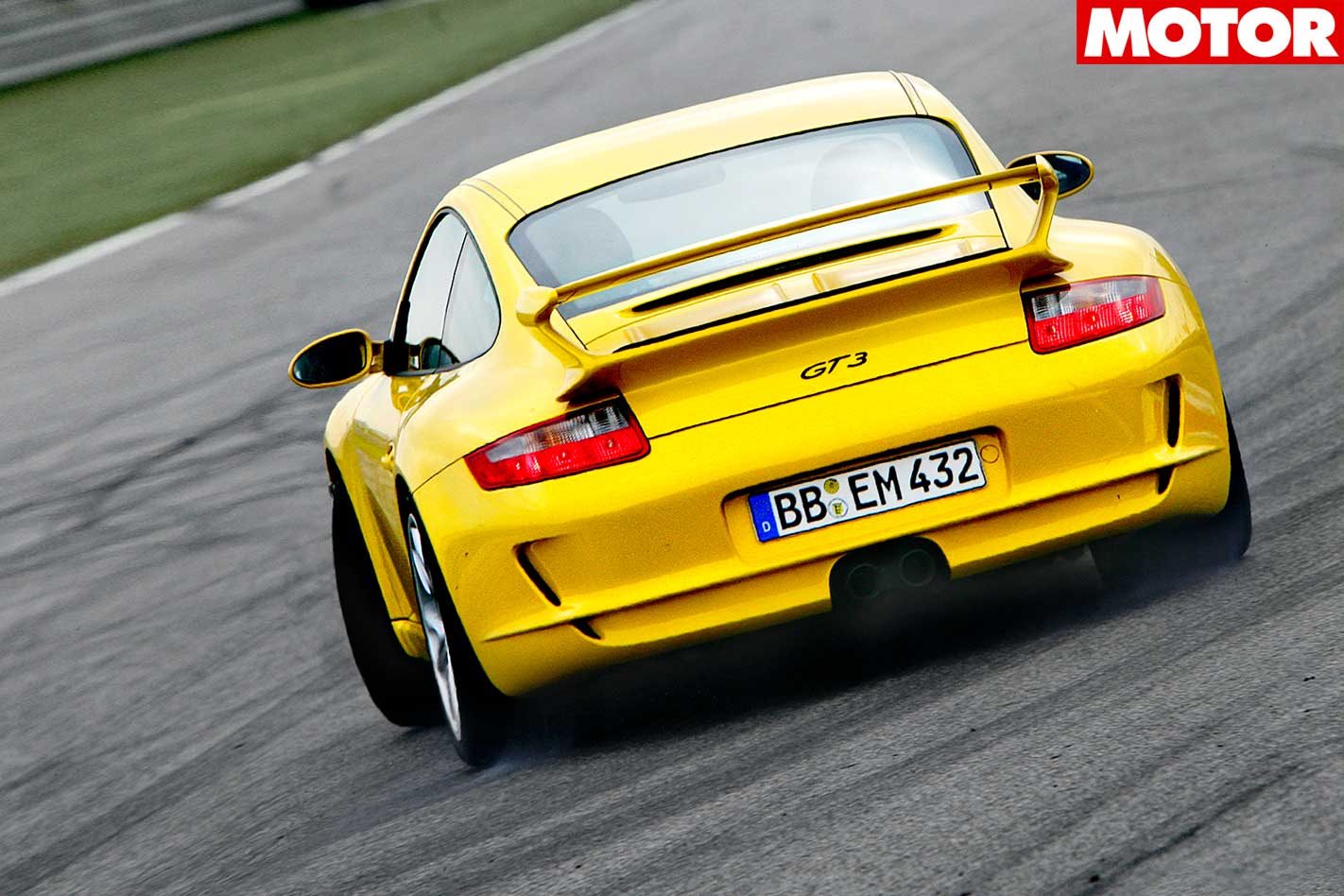 The previous GT3 wasn’t nearly as quick, but it exhibited more brutal manners and provided less margin for error than its replacement. Although this 911 is so much more competent than many drivers it will be paired with, the evolution of the chassis, the drivetrain and the electronics have made the beastliest 997 a lot more manageable. It’s these evolutions which pave the way for the next GT2, the car expected to be the best Porsche GT of all time. After all, what impresses most about the GT3 is the steak, not the sizzle.

The GT3 has further honed its repertoire while at the same time learning a few amazing new tricks. True, it excels primarily on the track. But the commute to and from the circuit isn’t bad at all either. 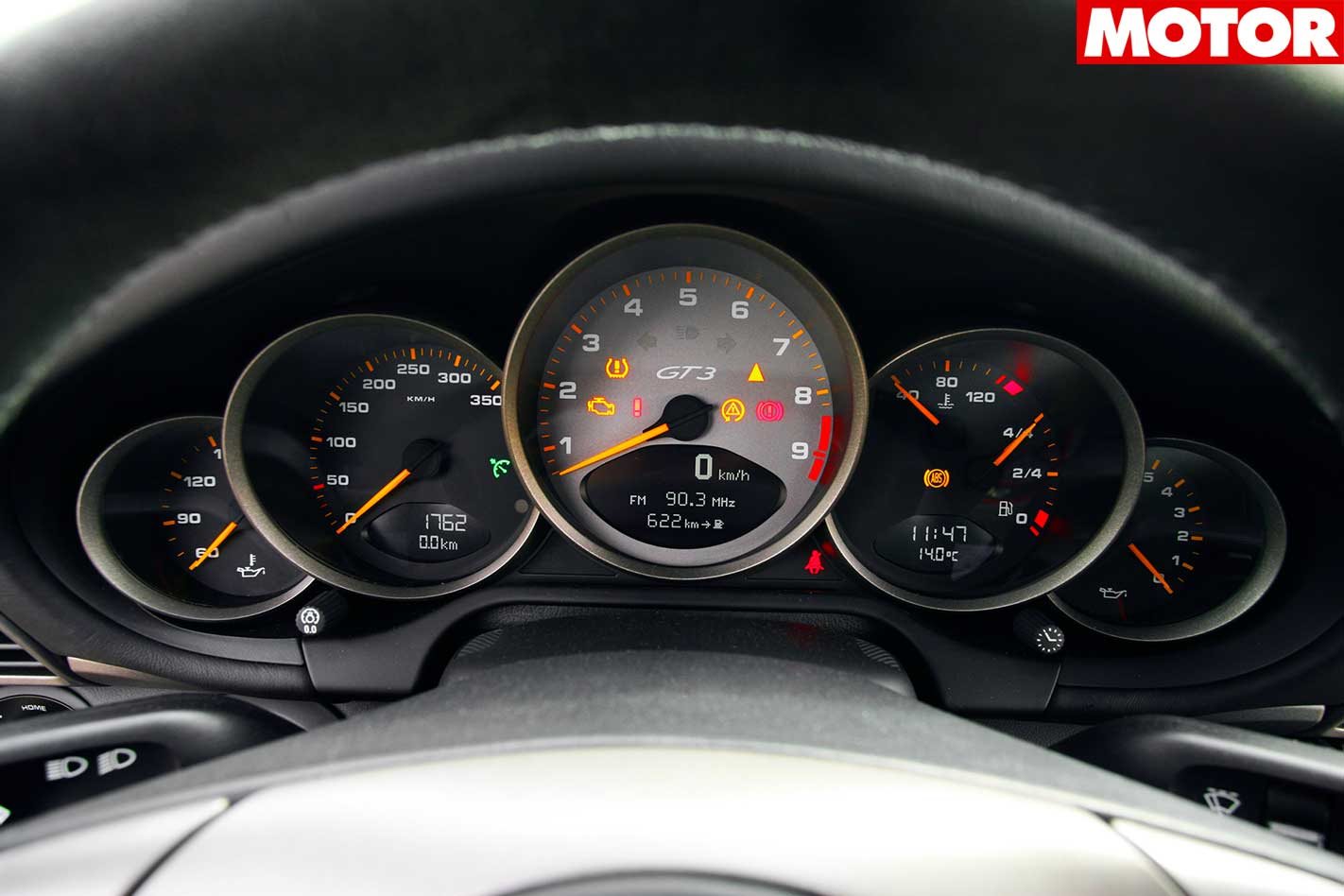 You can choose between two different specs of GT3 – Touring or Clubsport. The Touring (pictured) gets leather seats, sat nav and even a sunroof. The hardcore CS gets cloth-trimmed carbon fibre race buckets, a rear roll cage, six-point belts and a fire extinguisher. All GT3s come with suede-trimmed steering wheels and an instrument cluster inspired by the Carrera GT complete with yellow needles. 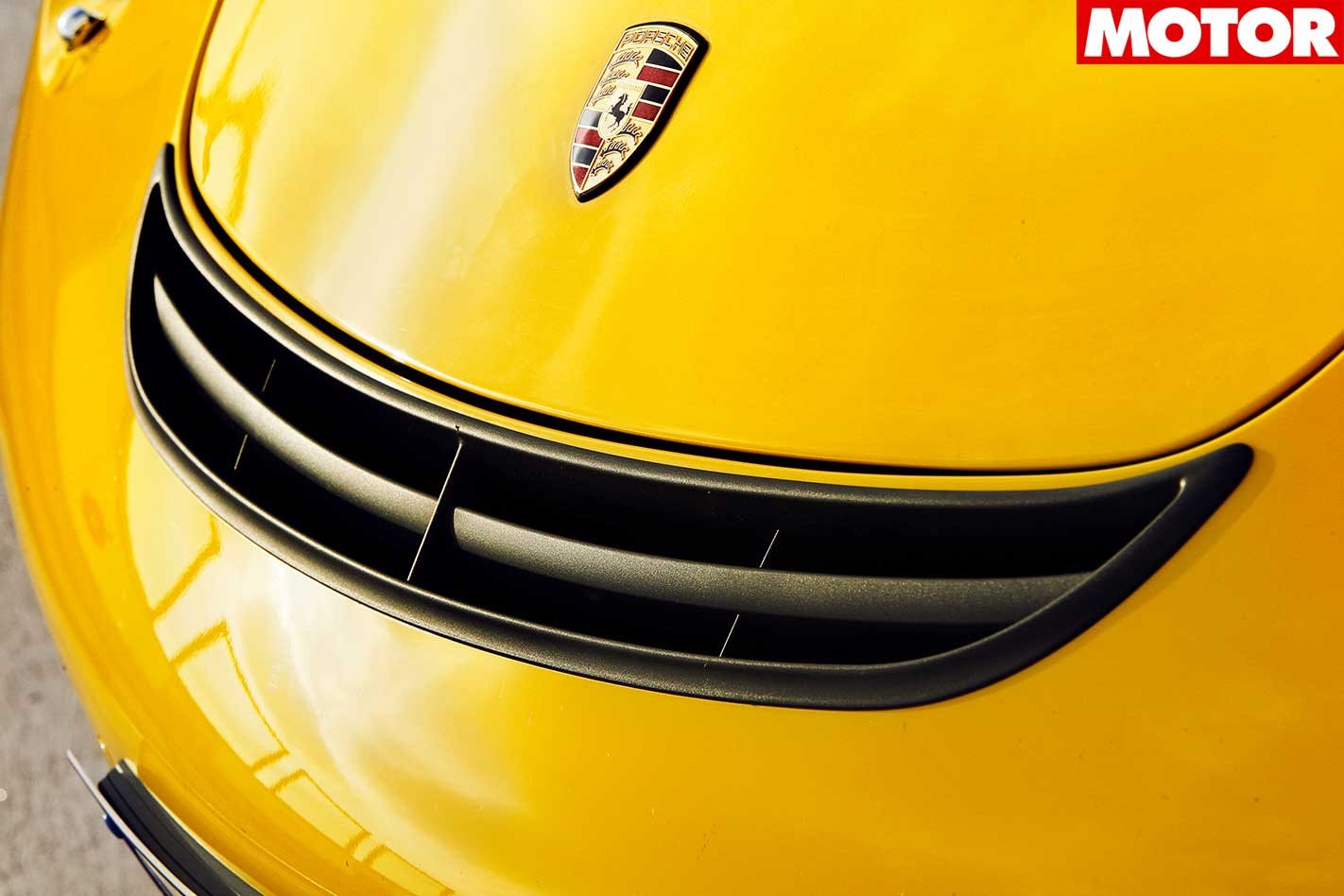 Based on the GT3 Cup racer, the GT3 is more aggressively styled than any other 997 model – although the upcoming GT2 may top it. The redesigned front-end boasts a ground effect vacuum cleaner type spoiler, which looks like it could suck up a Barina. The Coke bottle profile is dominated by flared arches filled with 19-inch alloys while the wide-body rear end features a fixed bi-plane wing and a pair of centre mounted exhaust pipes. 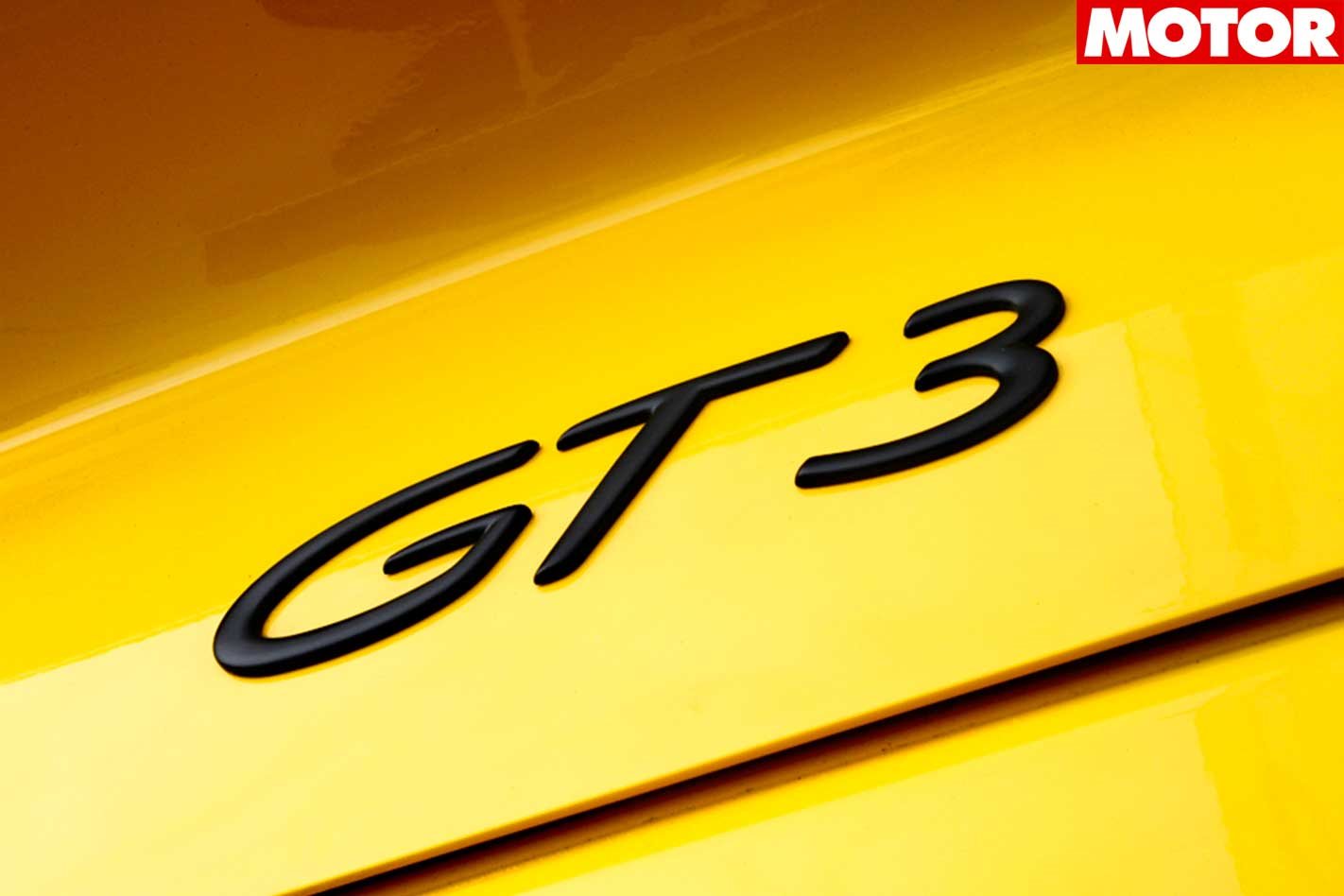