AS much as I appreciate the abilities and sheer speed of the current-model BMW M3, I, for one, will not miss it when it’s gone.

There: I’ve said it. It’s not that I don’t like the M3, just that it doesn’t make me want to sell my family to own one. Shout me down if you want (and I’m sure some will) but the M3 lost me philosophically when it went from a howling straight-six to a V8. And yes, I am aware that it was a 309kW V8 and, yes, I know it revved to 8000rpm and beyond.

And yes I’ll admit it was faster than the old six-cylinder M3. But still it did not move me. I even acknowledge that the original M3 was, in fact, four-cylinder powered, but for mine, a true M3 will always have an inline six-banger with an ear-shredding soundtrack and a redline way up here. And according to that formula, the very last of the six-potter M3s, the E46, is the big kahuna. Oh, the E36 was good. Great even. The original version with three litres and five-speeds was a rocket, but the update model with 3.2 litres and a six-speed manual was even rocketier. And then, when the E46 arrived, it seemed like BMW had chucked everything at the concept.

And when you consider that BMW knew then that it was to be the last of the six-cylinder M3s, maybe that’s exactly what happened. (And, yes, I know the next M3 will revert to six-pot power – see the bottom of this page – I’m speaking historically, okay.) Anyways, the E46 M3 was some kind of sweet ride.

The E46 bodyshell in two-door form looked bigger than the E36 in every direction, but it was also more muscular and better balanced. And for some reason, it didn’t date as quickly as the E36. It had that thing going on, too, where every panel looked stretched tight over the frame. There also seemed to be more differentiation between the M3 and the lesser 3-Series in E46 form, so you didn’t get the hordes of 318is with M3 body-kits and twin tail-pipes cruising the strip on a Saturday night, giving real M3 owners (and anybody else who could spot a ringer) the irrits.

Inside, it was classic BMW restraint with enough clues to let you know you were snuggled up in something special. It was all business, though, and those precise, clear instruments and form-fitting seats were all about going quickly. So were the noisy bits.

With 252kW from its 3.2 litres, the secret to it all looked to be the oversquare bore-stroke relationship (87mm x 91mm respectively) and the ability to rev to 8000rpm and more (power peaked at 7900rpm).

But that would be selling this firecracker way short, because as well as almost 77kW per litre (and remember that the Toyota 86/Subaru BRZ’s claim to fame is 74kW per litre a full decade later) the Beemer six stoked up another milestone; more than 100Nm per litre. Normally aspirated, that’s still a tough target to reach. You can thank the 11.5:1 compression ratio for some of that, but also BM’s clever VANOS variable valve timing system which acted on both the inlet and exhaust cams (Double VANOS, then). But as well as scorching acceleration, the M3 handled like a good ’un, too.

Firm suspension that still rode reasonable well was part of the deal, as were the huge 255/40 18 Michelins on the rear and the clever limited-slip differential. Awesome? Certainly was, and now that it’s a bit older, it’s achieved legend status. And that’s why you want one now.

Unlike a lot of collectible cars, however, you don’t need to don the kid gloves and the rose-tinted driving glasses in order to forgive the thing its weaknesses against modern stuff. No Siree: The M3 will still cut a swathe through the pretenders in modern gear and unless the bloke in even the newer V8-powered M3 knows his onions, a well-driven E46 will still clean him up. Again, this is precisely why you want one. So, if you’re shopping around for an E46 M3 right now, good news. Prices have never been more reasonable and, if the E36 experience is anything to go by, the price might yet still fall a little more, but then it‘ll bottom out as time, kilometres, and preventative maintenance begin to separate the good ones form the mere survivors.

Speaking of preventative maintenance, it’s critical with an M3. This is, after all, almost a race motor. Twenty years ago, it would have been a race motor. Anyway, that means tight tolerances and lots of fine, intricate oilways (especially for the VANOS mechanism).

In turn, that means that the M3 donk will absolutely not tolerate skipped oil changes. So that’s probably where to look first; the service handbook. Beyond a stamped, up-to-date handbook, the dipstick can give you a few clues, too. The oil on the stick should not only be between the full and low marks, it should also be a nice, clean, brown colour. 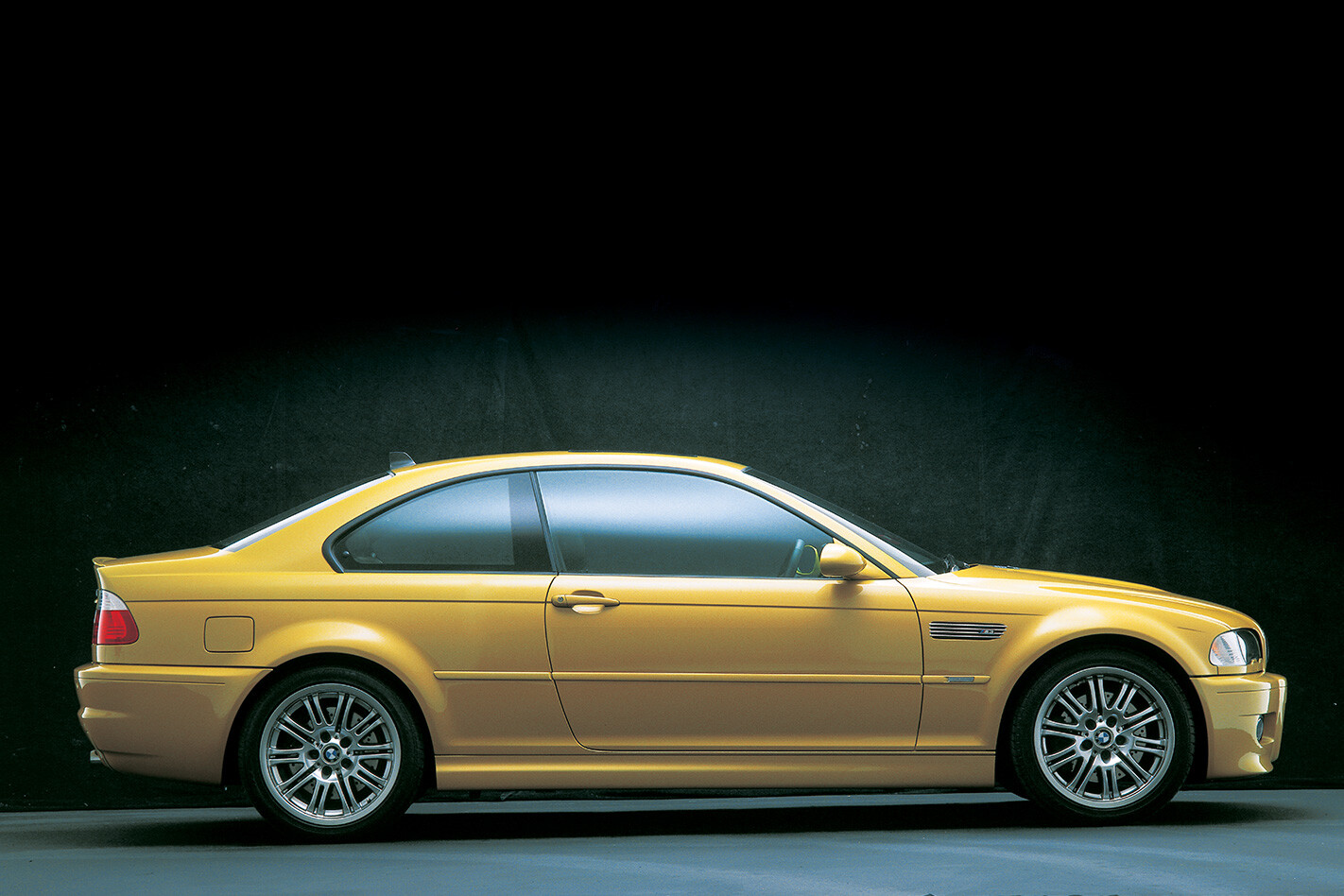 If it’s black and looks like it was just scraped off a fairly deceased penguin, that’s a bad sign. Okay? For the car and for little Happy Feet. The engine should also run pretty quietly. There can be a few buzzes and whirrs as the fuelling sorts itself out during a cold start, but there shouldn’t be any timing chain noise, rattles or dull thuds coming from under the bonnet.

This may prompt a few sellers to warm the car up for you before you test drive it. Don’t fall for it. You want to start the car and listen to the engine from dead cold, so arrange to come back next morning (yes, before work if necessary) to start the thing from scratch.

The VANOS function can fail over time and this is a major expense to put right. If you’re in doubt, then an independent look-see by somebody in the know might be a good idea. Rust isn’t an issue with the E46 and if there’s any sign of corrosion anywhere on an M3, start asking tough questions. 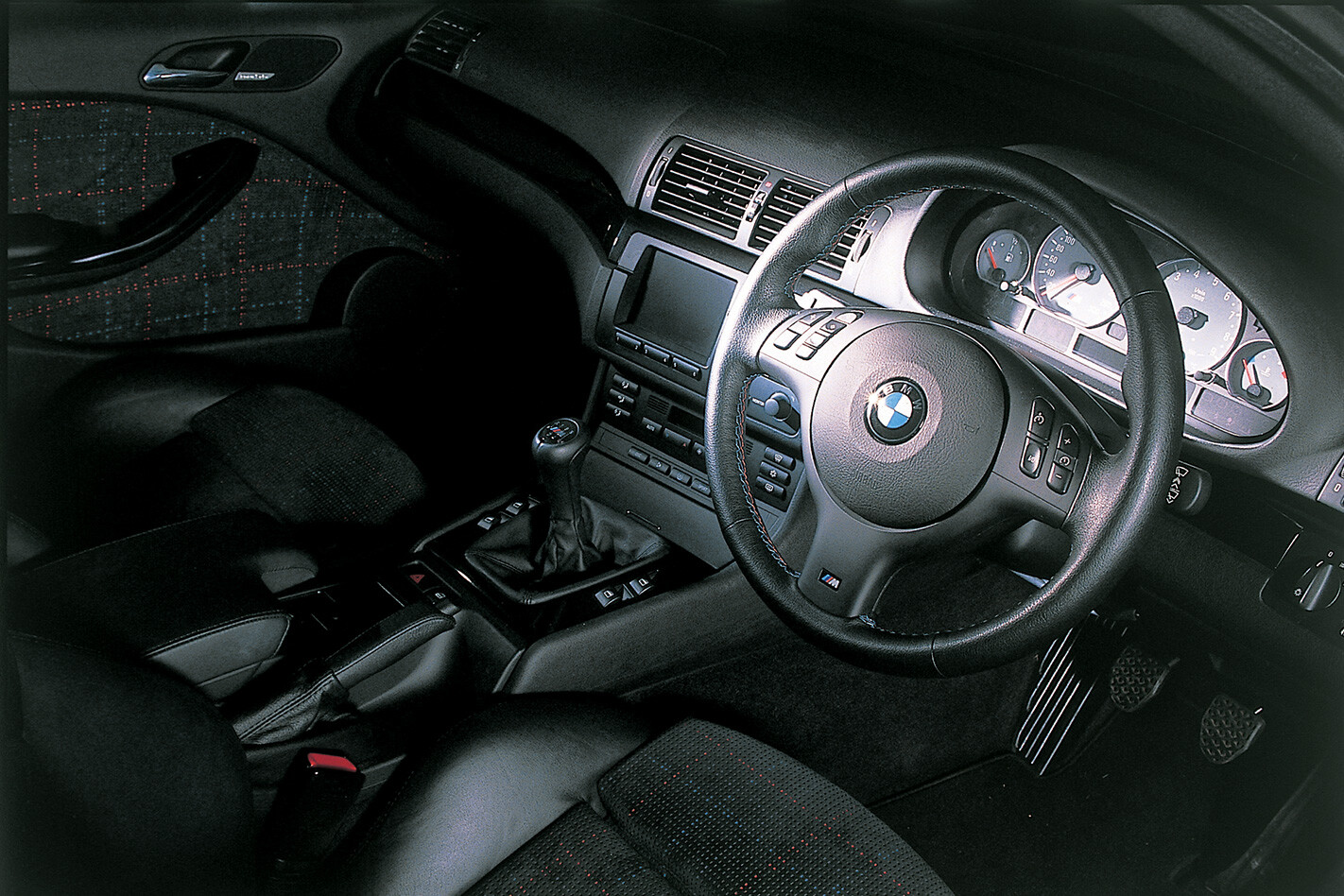 Stuff like, how come a fully galvanised car is rusty? It could be that the bodywork has been repaired poorly which has allowed rust to gain a foothold, or it could be a grey-import from a country where the weather is humid and the traffic appalling. Either way, there’ll be some price-adjusting as a result.

As many high-performance cars get older, subsequent owners who bought them for the badge rather than the actual ownership experience might be tempted to replace tyres and brake pads and such with inferior quality items. Not only will this destroy the feel of the car, it’ll also diminish its outright performance.

Which is why you’re buying an M3 in the first place, right? Exactly. And for Pete’s sake buy a manual and not the six-speed SMG. The current BMW DCT is a great thing and the SMG fitted to the E46 was better than previous attempts, but, and let’s be honest, it still sucked the bag. Aside from a vastly inferior driving experience, the SMG gearbox will also see your M3-cred evaporate into thin air.

THE GOOD
1. SIX APPEAL: The last M3 with a straight six before the V8 era began. The 3.2-litre beauty sings all the way to 8000rpm
2. THE BODY BUILDER: It’s a proper Euro muscle car with looks that can’t be faked by mere mortals such as the regular 3-Series
3. STILL GOT IT: A brilliant performance car in its day and still very capable of annihilating many of today’s wannabes

THE BAD
1. HIGH MAINTENANCE: The E46’s six cylinder engine is sweet, but sophisticated and the needs preventative care. VANOS can fail, too
2. TRANNY TROUBLE: The SMG gearbox doesn’t cut it. You’ll get far more fun and satisfaction from the six-speed manual
3. LOSING FEELING: Owners previous to you may not have replaced parts with high quality ones. This will affect the E46’s famous feel

BACK TO THE FUTURE

There is talk… much talk, that the next M3 will return to the glory days of inline-six power. It isn’t, of course, that simple and the world has moved on. Which is why you can expect the next M3 to be not only a straight-six, but a turbocharged one, too. And if you’ve driven a 1M or the new M135i with their blown sixes, this can only be good news.

And given that BMW has recently cracked the concept of fitting no less than three snails to its latest six-cylinder diesel engines, don’t rule out multiples of turbochargers, either. Who’d have thought two turbos would one day be deemed insufficient? 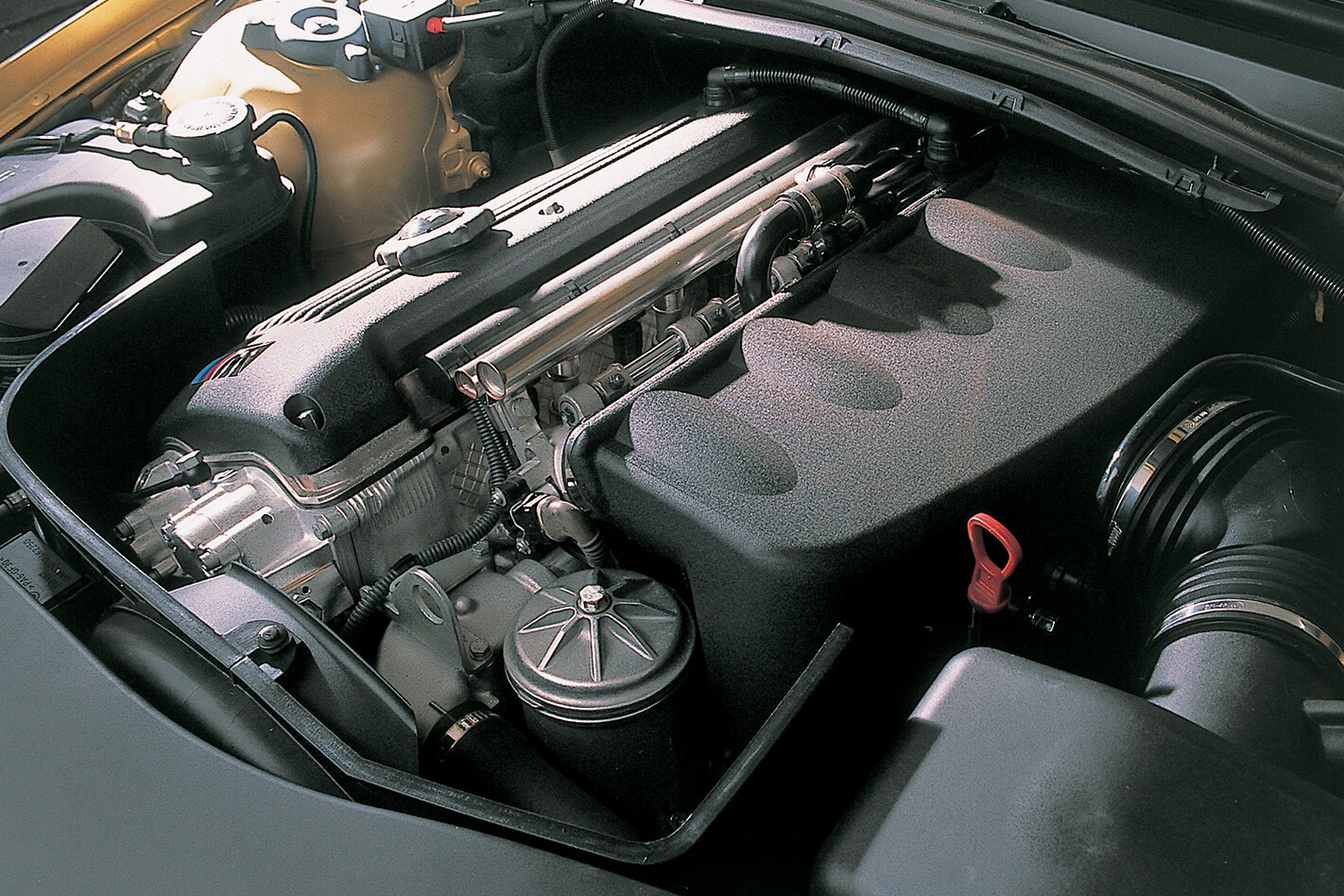 Those in the know reckon the new engine will displace three litres and offer up something like 325kW which is more than the atmo V8 in the current M3 (as well as reducing fuel consumption over the existing model). Bank on a seven-speed DCT clutchless box but pray BMW sees sense and keeps a six-speed manual for those of us clever enough to shuffle our own clutches.

Is that all? Nope, probably not and as well as the sedan version, there’s likely to be a coupe again, this time taking the M4 moniker in line with head office’s new naming policy that sees four-doors stick with odd numbers and coupes take an even number. Look out for it late this year as a 2014 model.