HSV call it an MCE, which stands for a “Mid-Cycle Enhancement”, but there is no mistaking that Holden’s “go-fast arm” put as much work into their new F-Gen range as they would an entire new platform.

Leaving aside the bombastic 430kW GTS (which HSV regard as a separate engineering program) a colossal amount of work has gone into making the new Clubsport, Maloo and Senator platforms genuinely world-class performance cars. 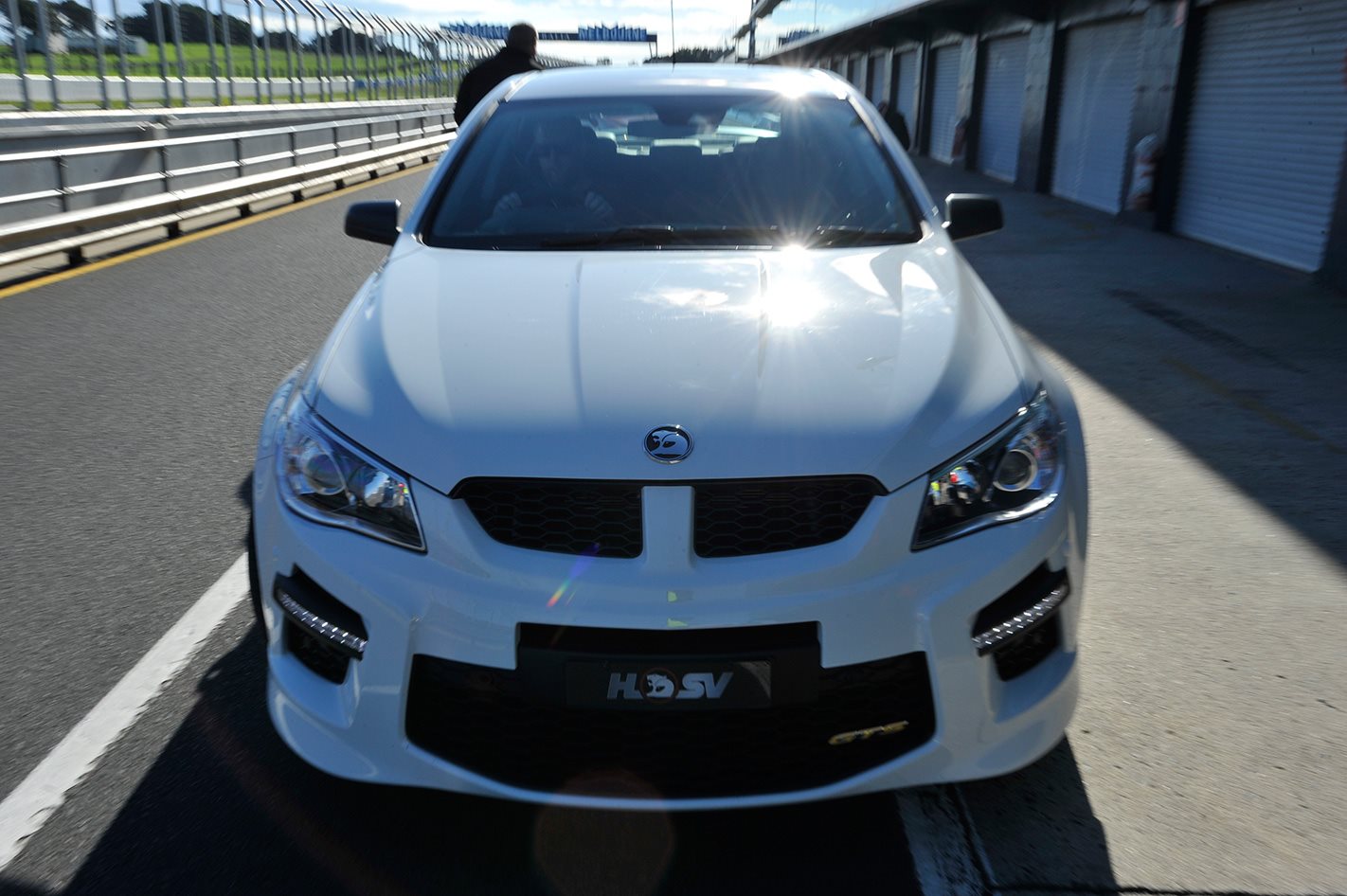 MOTOR was on-hand in Victoria to sample the entire F-Gen range over two days, with one day spent on a road loop that wound the back way from Melbourne’s Tullamarine airport around to Phillip Island.

The second day was spent giving the 6.2-litre monsters their head around the Phillip Island Grand Prix track, and it was here we were able to sample a pre-production 430kW (that’s 580hp in the old money) supercharged GTS. Unfortunately, we’ll have to save the driving impression of the GTS until the embargo is lifted in a few months.

That’s not such a bad thing as it gives the rest of the range its time in the spotlight. It is time these cars deserve as they’ve been overshadowed by the King Kong range-topping GTS since the new-gen cars were revealed in mid-May. 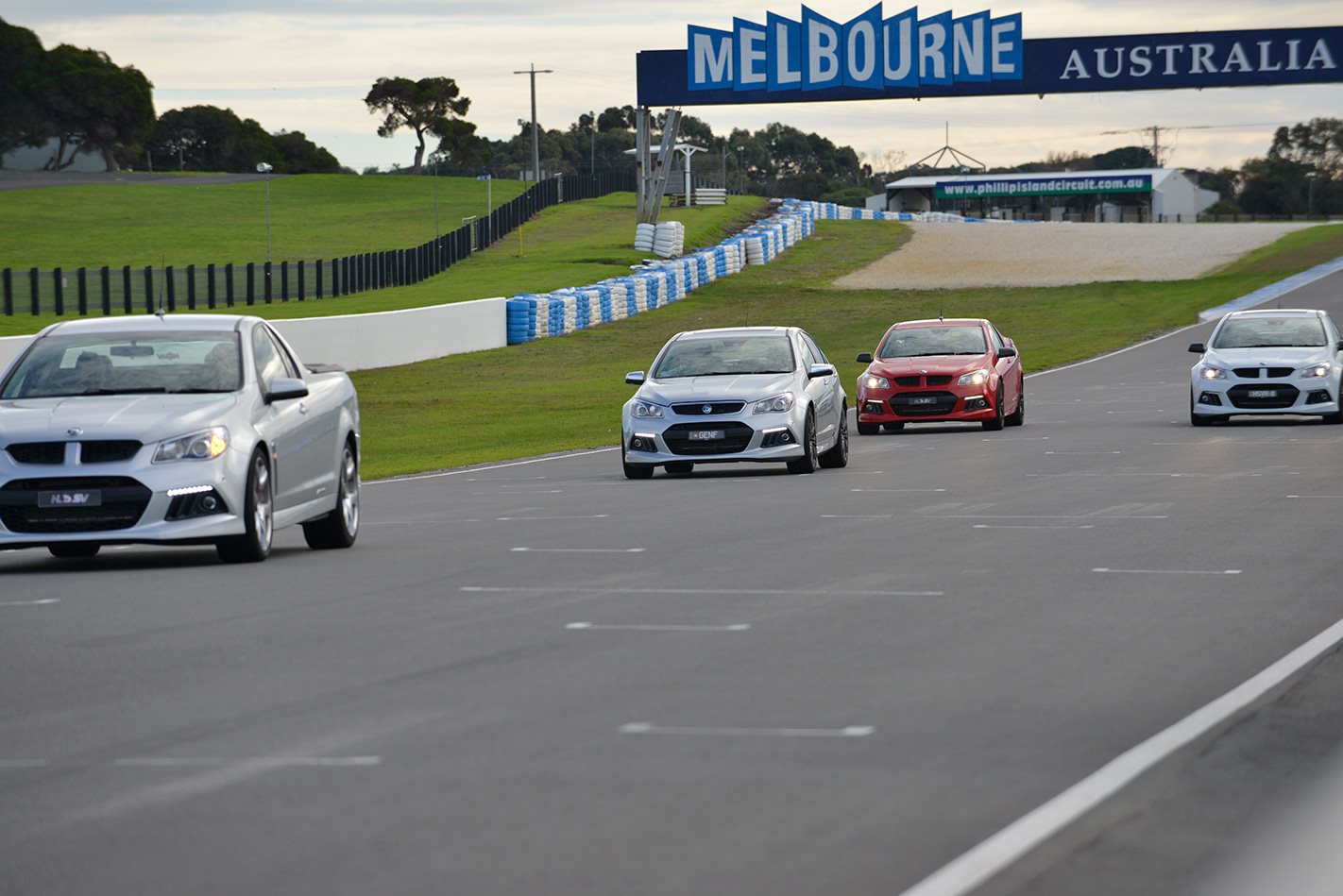 While they don’t score the blown LSA, Electronic Torque Vectoring tech, Track mode or gigantasaurus AP brakes, anyone who buys one of the NA models shouldn’t feel short-changed. The range starts with the 317kW LS3 Maloo and Clubsport, leading to the 325kW Maloo, Clubsport and Tourer R8 and topped by the 340kW/570Nm Senator Signature and Grange.

The R8 models get black/machined-finish wheel treatment on their cast-alloy 20s, plus a bi-modal exhaust and a swag of electronic goodies, while the Senator and Grange score the utterly awesome third-generation iteration of the Magnetic Ride Control (MRC) with two different levels of performance (Sport and Performance) as opposed to the GTS which has three – Sport, Performance and unique-to-GTS Track mode.

For Maloo, Tourer and Clubsport purchasers wanting a bit more than 325kW, they can spend an extra $5000 on the SV enhancement pack. This scores them the 340kW LS3 engine package, plus new 20x8.5 and 20x9.5-inch forged alloy wheels, bi-modal intake and black-accents on their bodykit. 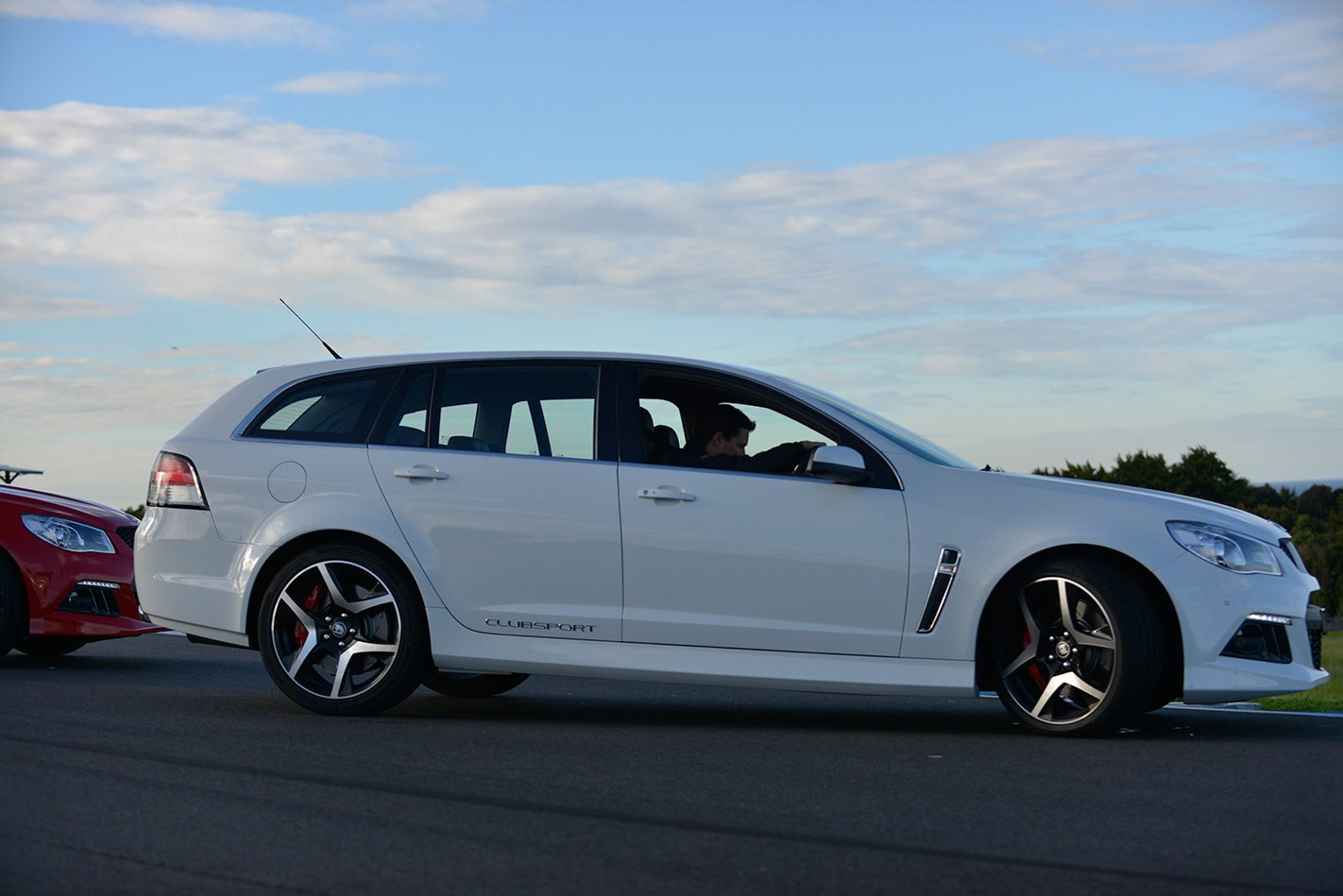 They all get new Continental rubber, spanning 255/35 up front and 275/35 out back. So, you can see they’re pretty well stacked with on-board features and equipment, but how well do they drive? Just between you and I and the wallpaper, bloody well.

We kicked off in the base-model Clubsport on the road loop and the ride quality, fit and finish and levels of Noise, Vibration and Harshness (NVH) are all streets ahead of the E-series range. The new dash layout and buttons feel like they belong in a premium European product and, while the entry-level Clubbie (and Maloo) miss out on a bunch of features, you don’t feel like you’re in a base model stripper edition. 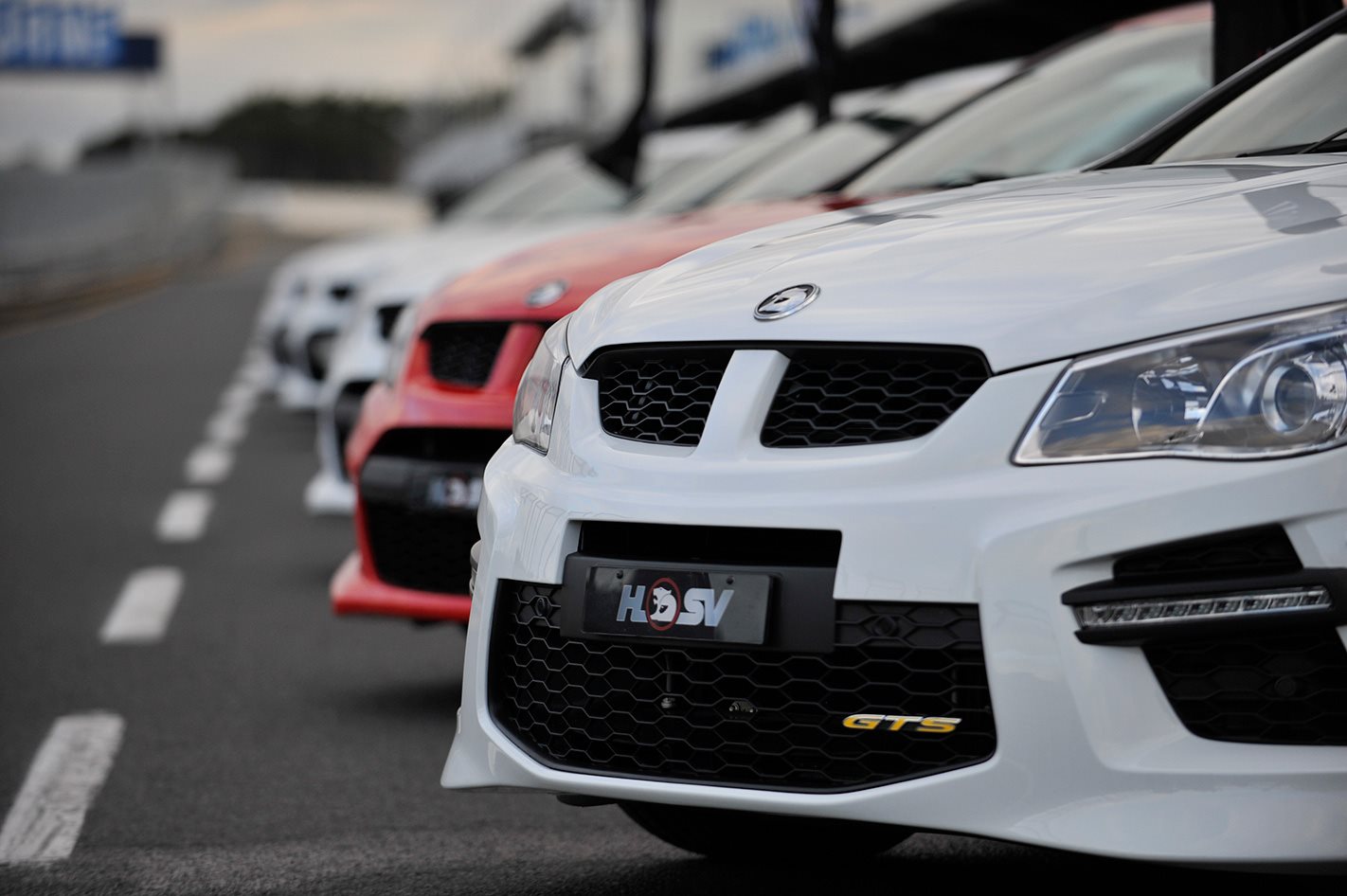 Finally, the person who buys at the bottom of the HSV tree isn’t presented with a cabin full of blanking plates and missing buttons – the F-Gen Clubsport feels like it’s not lacking anything.

The AP Racing brakes are nothing short of brilliant, with excellent pedal feel and great bite, even when pushed on the track.

The pedals aren’t really set-up all that well for heel-toe changes (they’re a bit high), but that is a minor complaint against an otherwise well set-up cabin that has vastly improved ergonomics over the VE range – we’re so glad Holden moved the window switches back to the door, and there’s a button on the door for the boot release!

As electric steering has been fitted to the regular VF Commodore range, all new HSVs score it, and this is a damn good thing. With the software tweaked to suit a more sporting intent, it is a vast improvement over the VE-generation hydraulic steering. There’s still a very, very slight delay just off-centre, but the steering on whole is rich, full of feedback and beautifully weighted. 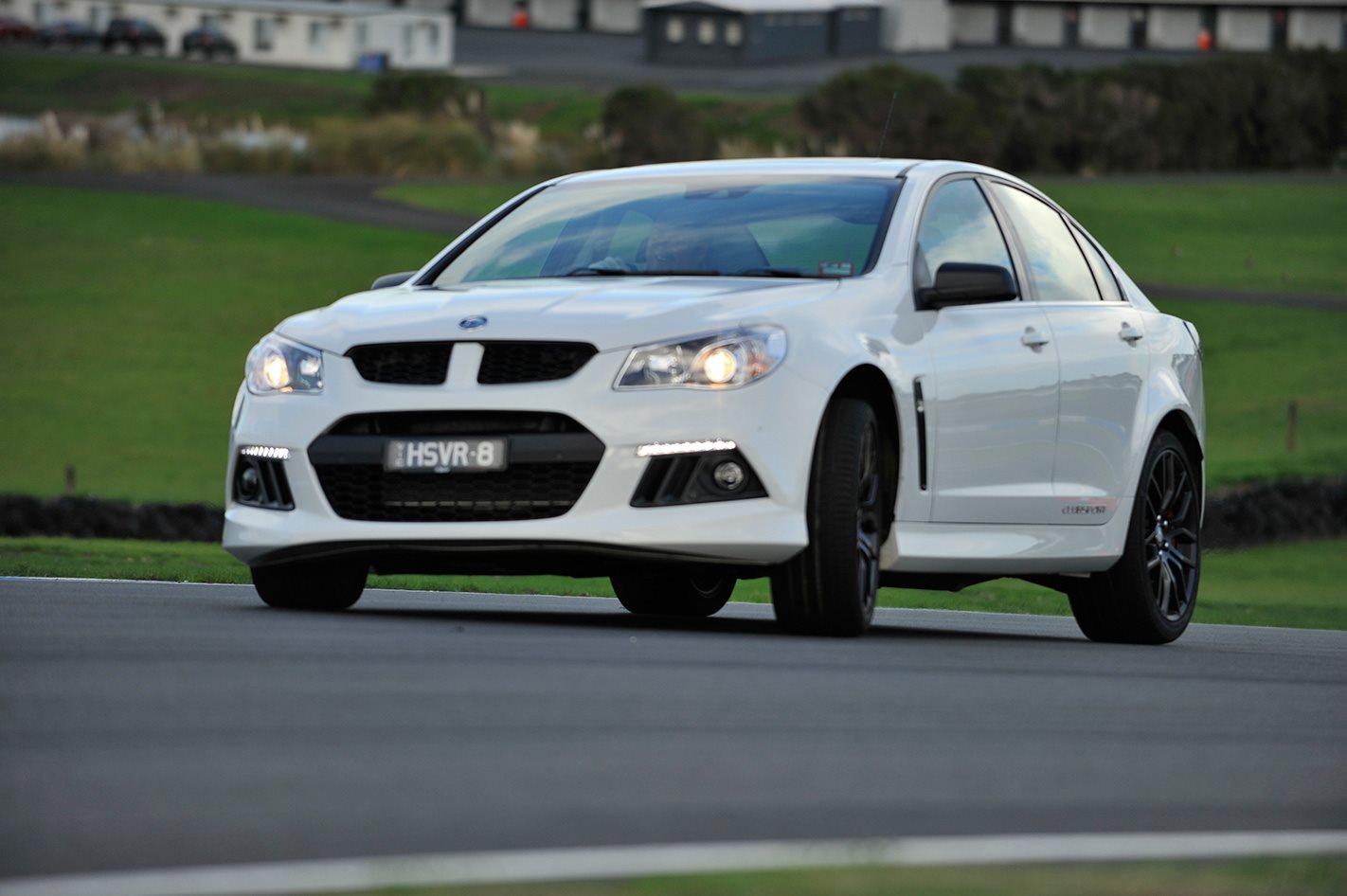 It was wonderful on the track at Phillip Island, even when we had to punt the massive sedans, utes and wagon through motorkhana courses. Playing with the Driver Preference Dial (DPD) on the centre console lets you switch between Tour, Sport and Performance modes.

In the base cars it tweaks the steering, but in the R8 models (Clubsport, Tourer and Maloo) it also opens up the Bi-Modal exhaust for a bit of hooligan bark. For anyone even remotely interested in driving fast, the Performance setting is definitely the way to fly.

The R8s also score the Enhanced Driver Interface (EDI), which is a fancy way to describe the on-board read-outs on the eight-inch touch-screen in the centre of the dash. There are a bunch of different menus to scroll through, including exhaust flow, G-meter, accelerometer, RPM read-out, lap-timer and even track maps. 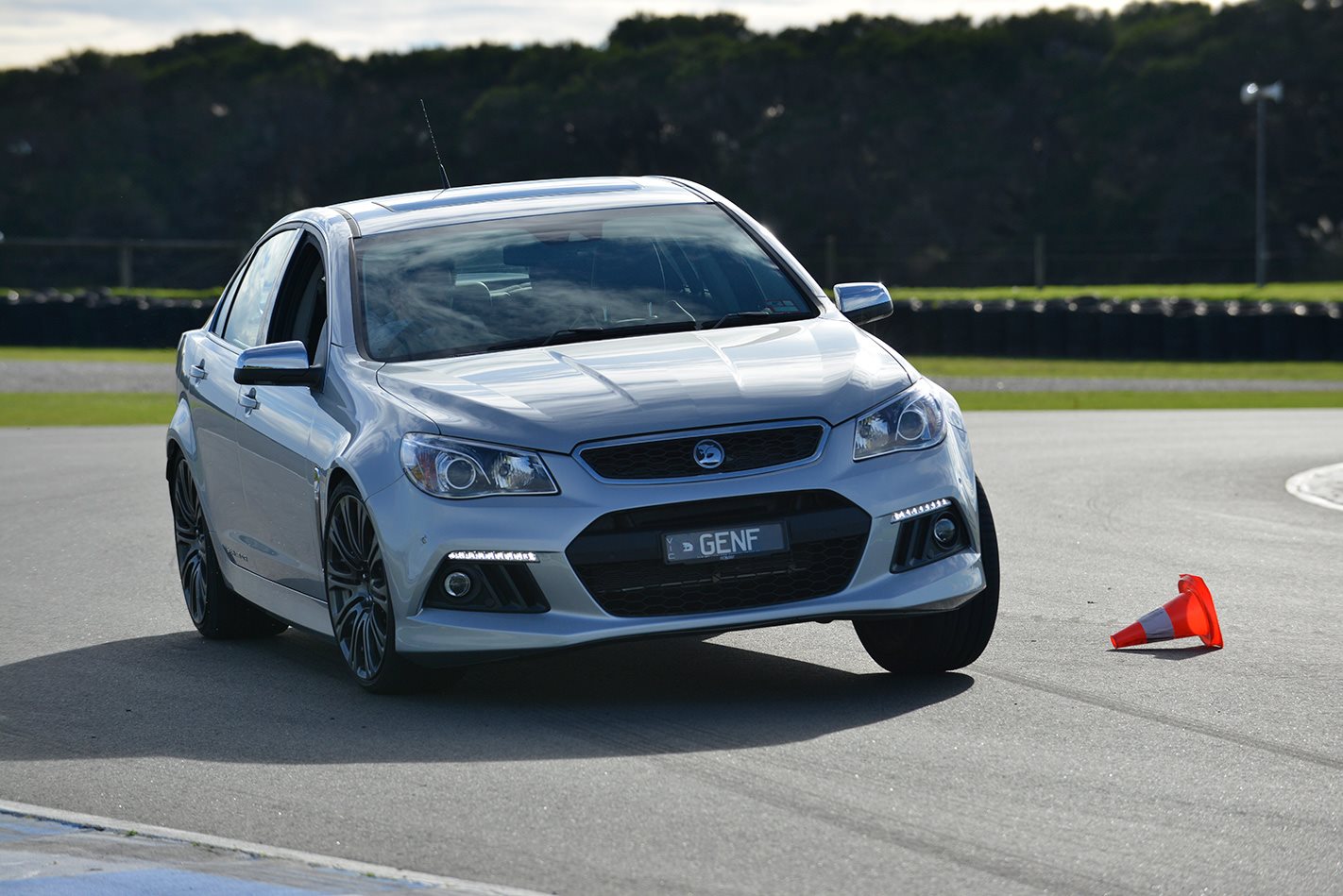 That was one seriously impressive feature – HSV have a map of just about every single race track in Australia, even tiny ones like Broadford and Morgan Park. Or, you can trace your own if you’re out at a skidpan day.

As the base models don’t score the Bi-Modal exhaust some die-hard V8 fans will find them a bit too quiet. However, option up your R8 to SV-spec and you’ll get not only the loud/quiet exhaust, but HSV’s brand new Bi-Modal intake developed especially for the F-Gen range.

We had manual and automatic models to sample in basic 317kW and 325kW R8 specifications. The manual is the pick of the two gearboxes on offer for me. The clutch is far lighter than in previous generations of HSVs and the 6060 ’box shifts better than the old T56 Tremec could ever hope to, slotting through ratios with a firm, secure clunk. 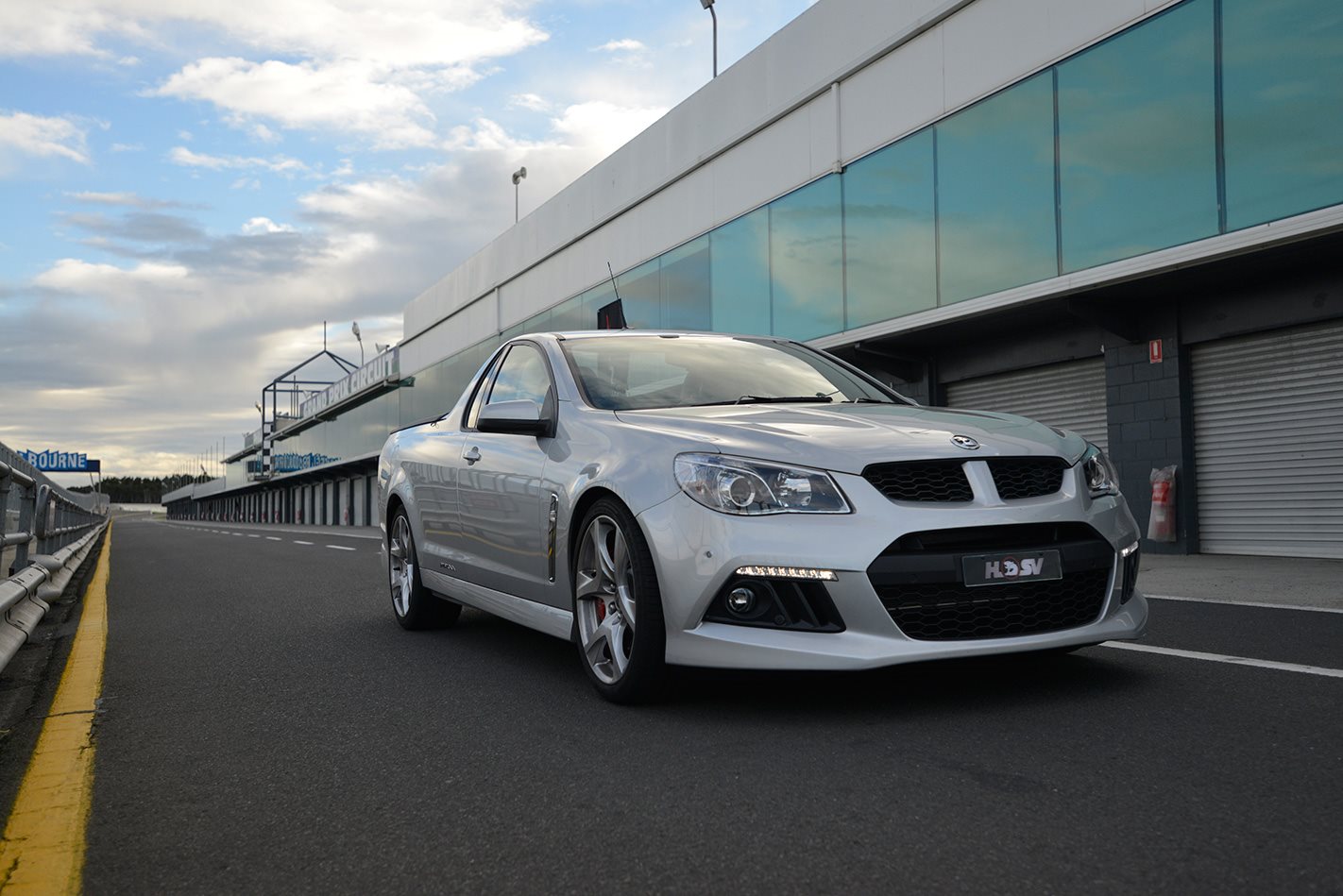 In contrast, while the 6L80E bangs through gears well in the performance mode, in Drive it is slow to drop gears and the lack of steering wheel-mounted paddle shifters really impinges your ability to hustle the car once you’re on a twisting road or track. With the inclusion of hill start assist technology on the manual models there aren’t many reasons to be picking an auto over a DIY-rower, even if you drive in traffic daily.

On the road I couldn’t sense any difference in grunt between the base model and the R8. Both provide a surge of acceleration that swells through the mid-range and builds into a frantic, blaring top-end that’ll have your license sweating bullets.

The pick of the Clubbies, for me, is definitely the manual 340kW SV. With hand-welded headers from the LSA and a Bi-Modal intake system the SV-enhanced Clubsport really felt like it wanted to rev and meant it felt like a much smaller machine from behind the steering wheel. 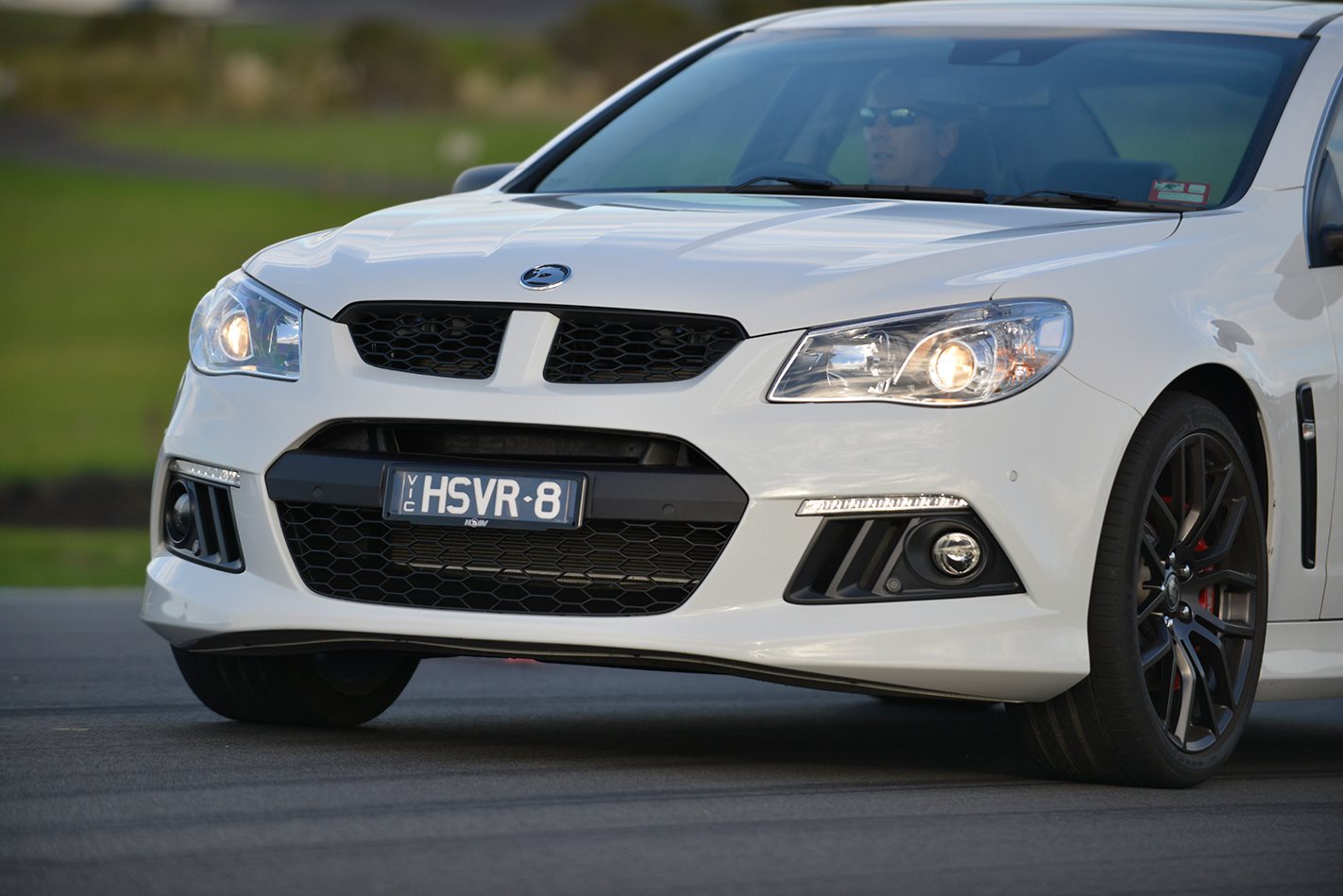 With the six-speed manual it was happy to waft along quietly in Tour mode, or play the archetypal muscle car head-banger in Performance mode – lounge muzak or thrash metal was a twist of the Driver Preference Dial away… and we pretty much left it set to Metallica the whole time.

Across the back of the Yarra ranges the SV ate up corners and dispatched straights with ease, soaking up large and small imperfections in the road surface without ever upsetting the big four-door’s balance or poise. Even on greasy, slimy tree-covered Hotmix the F-Gen range were sure-footed and had to be violently provoked into any kind of under or oversteer.

Even the 340kW Maloo SV we tested felt planted on both road and track. We got a slight wiggle from the tail going over the diabolical Lukey Heights complex at Phillip Island, but you’d expect that from even the most dynamically adept machinery given that section of track is the Aussie equivalent of Laguna Seca’s infamous Corkscrew. 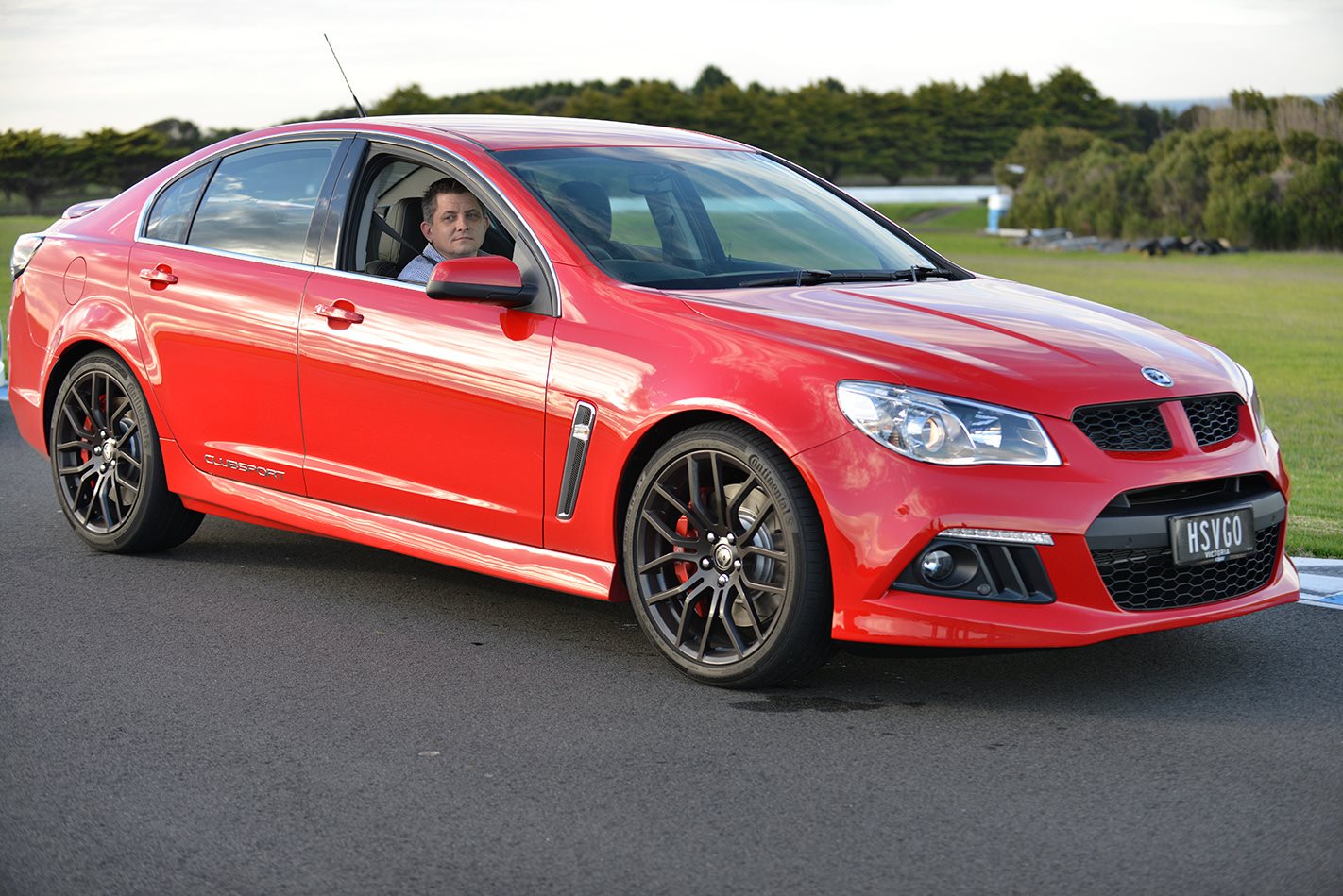 While the Maloo and Clubsport range handle well they pale in comparison to the Senator, which comes fitted with the new-generation Magnetic Ride Control (MRC) suspension. The third revision of the MRC system features faster response to compression and rebound thanks to dual-coils in each damper.

What this means is you can belt down a rough, unpredictable rural road with the car set to the max attack Performance mode and it feels more composed and compliant than the conventionally-suspended models in the range. And yet, tip it into an unexpected corner and it remains flat, stable and predictable.

I tested this thoroughly when another journo and I “borrowed” the Senator for a quick half-hour road loop before dinner on the Wednesday night. We set the suspension to hardcore Performance mode and headed into the ranges behind San Remo in the dark, seeking out a bit of quiet road to test what the other journos had been raving about up to that point. 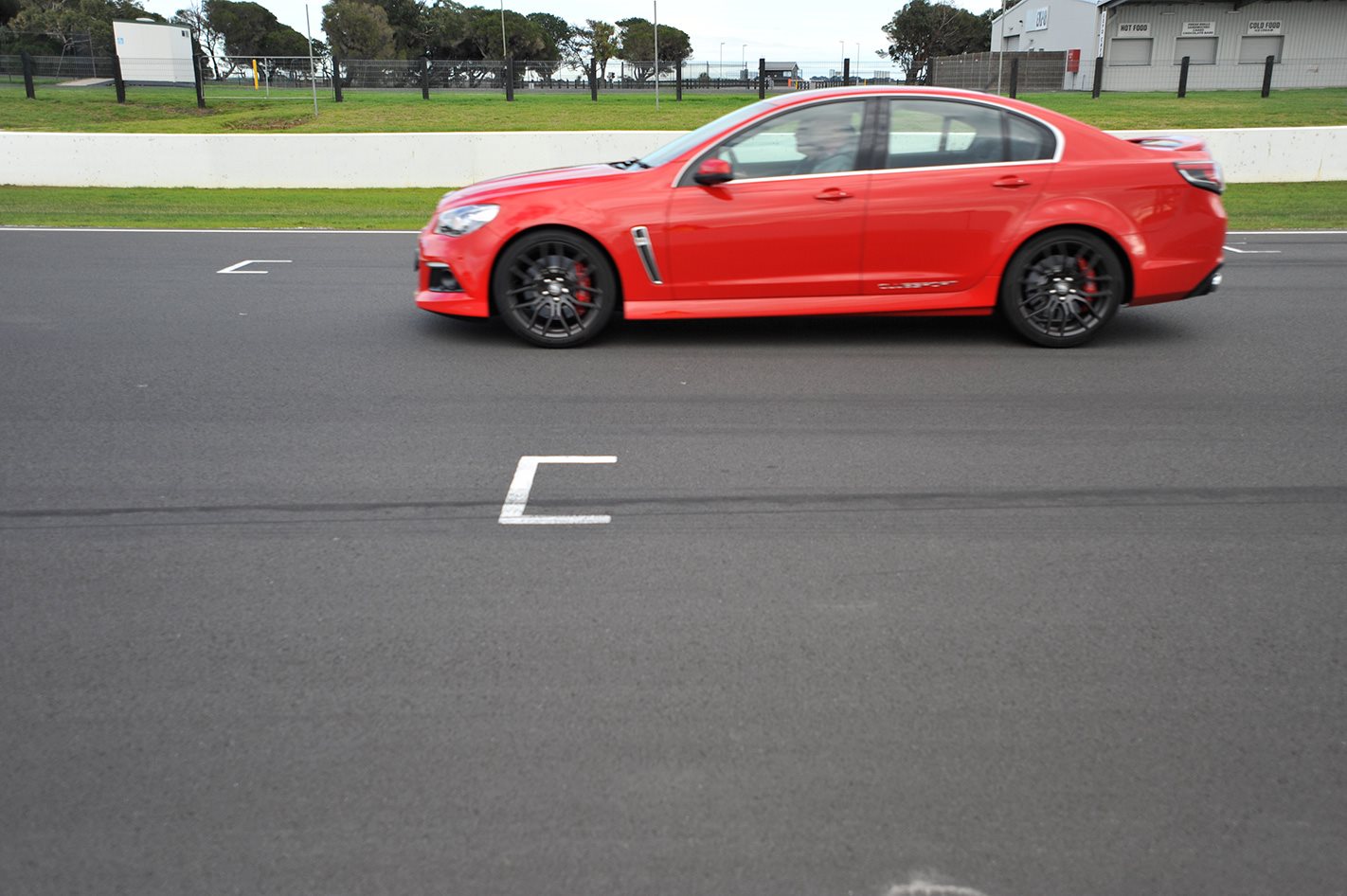 We soon found ourselves on a narrow, winding, diving rural bit of blacktop that would’ve been at home in any WRC or tarmac rally stage. With tightening corners, huge potholes, areas of subsidence and large bumps appearing from the pitch-black night at random it was like a carnival ride as the massive Senator lunged, parried and thrusted around each of the obstacles presented to us, all while maintaining a level of ride compliance that made the rest of the range feel like they had been fitted with cart springs.

As the road unfurled we were presented with corners that would appear like fast sweepers in the distance, but then suddenly and dramatically tighten as we hit them. They required extra stabs of steering input and late, hard stabs of brake, just to get around them. 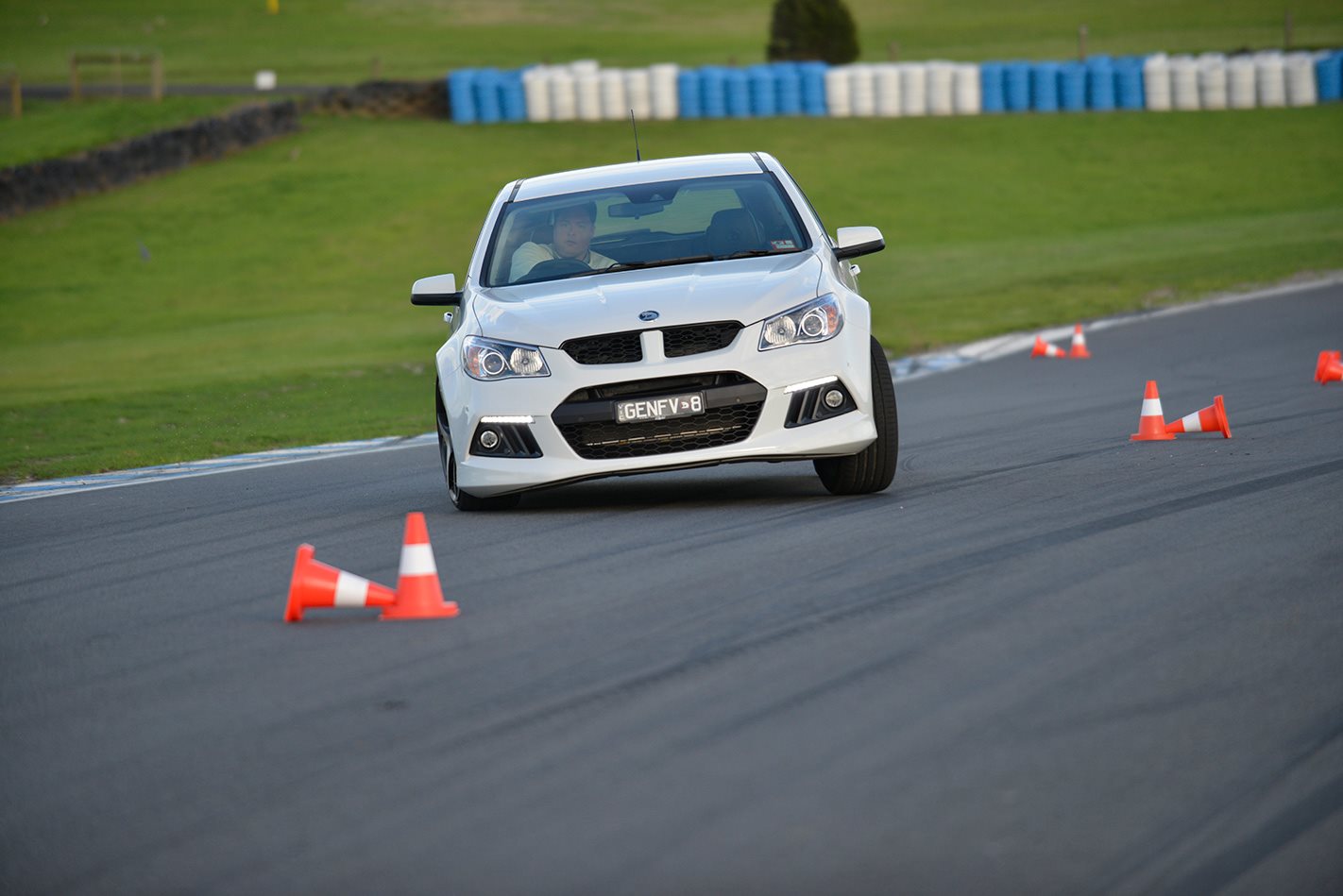 On a conventionally sprung and damped machine as large as the F-Gen Senator this would be a recipe for a huge tank-slapping lose. And yet the Senator just powered through the night with a total lack of fuss or drama in either of the two MRC settings.

Once we got to the track, I couldn’t help but feel the Senator’s edge was blunted by the automatic gearbox. If there had been a manual Senator Signature on the fleet for the launch, I’m pretty sure I’d have just about lived in that car. That MRC suspension with the free-revving 340kW LS3 and the Bi-Modal hooliganism pipes makes for a seriously addictive, seriously practical and seriously well-finished machine.

We just want one.

HSV has benefitted massively from Holden packing the VF range with on-board tech as even their base models have an impressive amount of on-board electronics compared to previous generations of local muscle machinery. And it should perk the interest of Euro buyers. 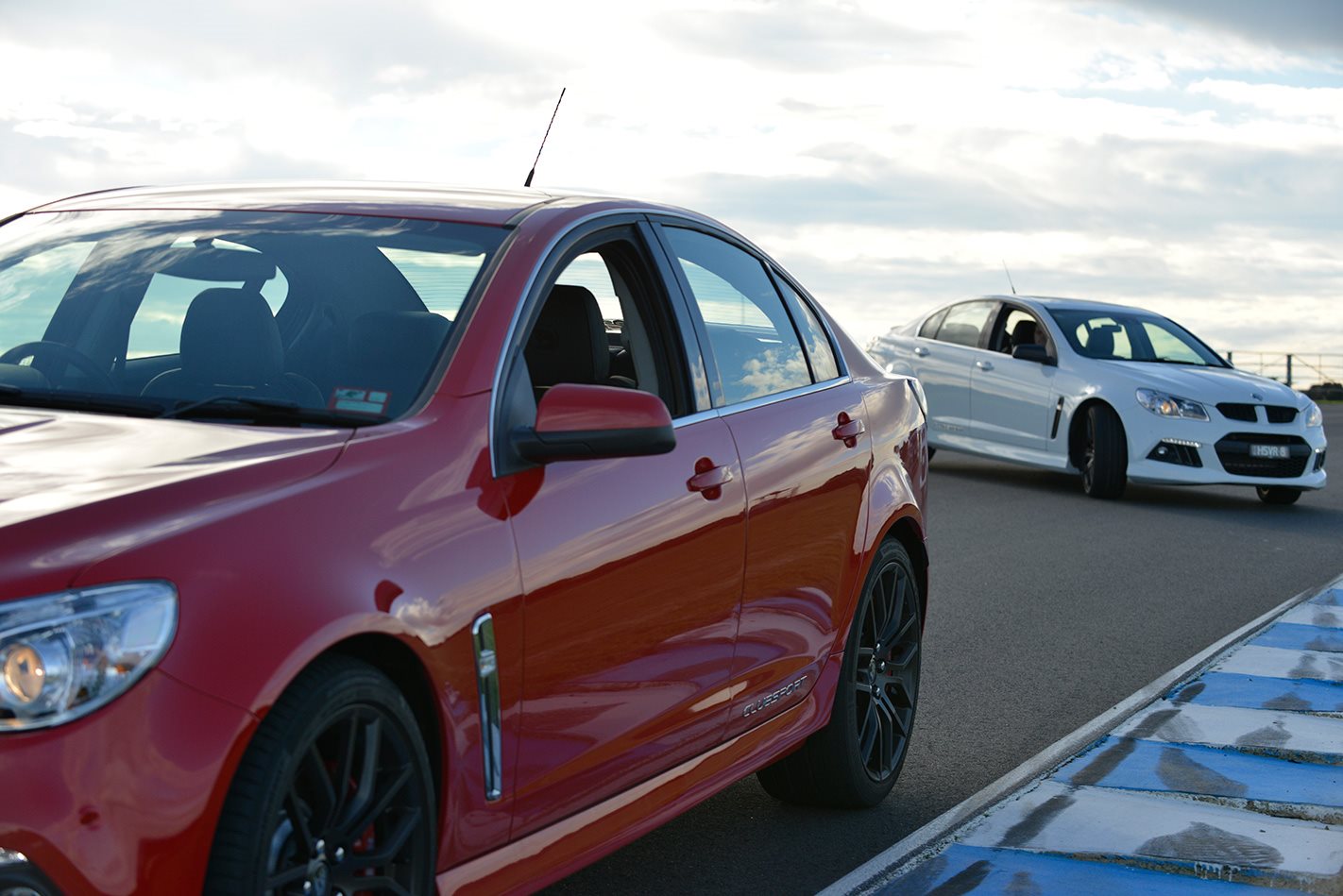 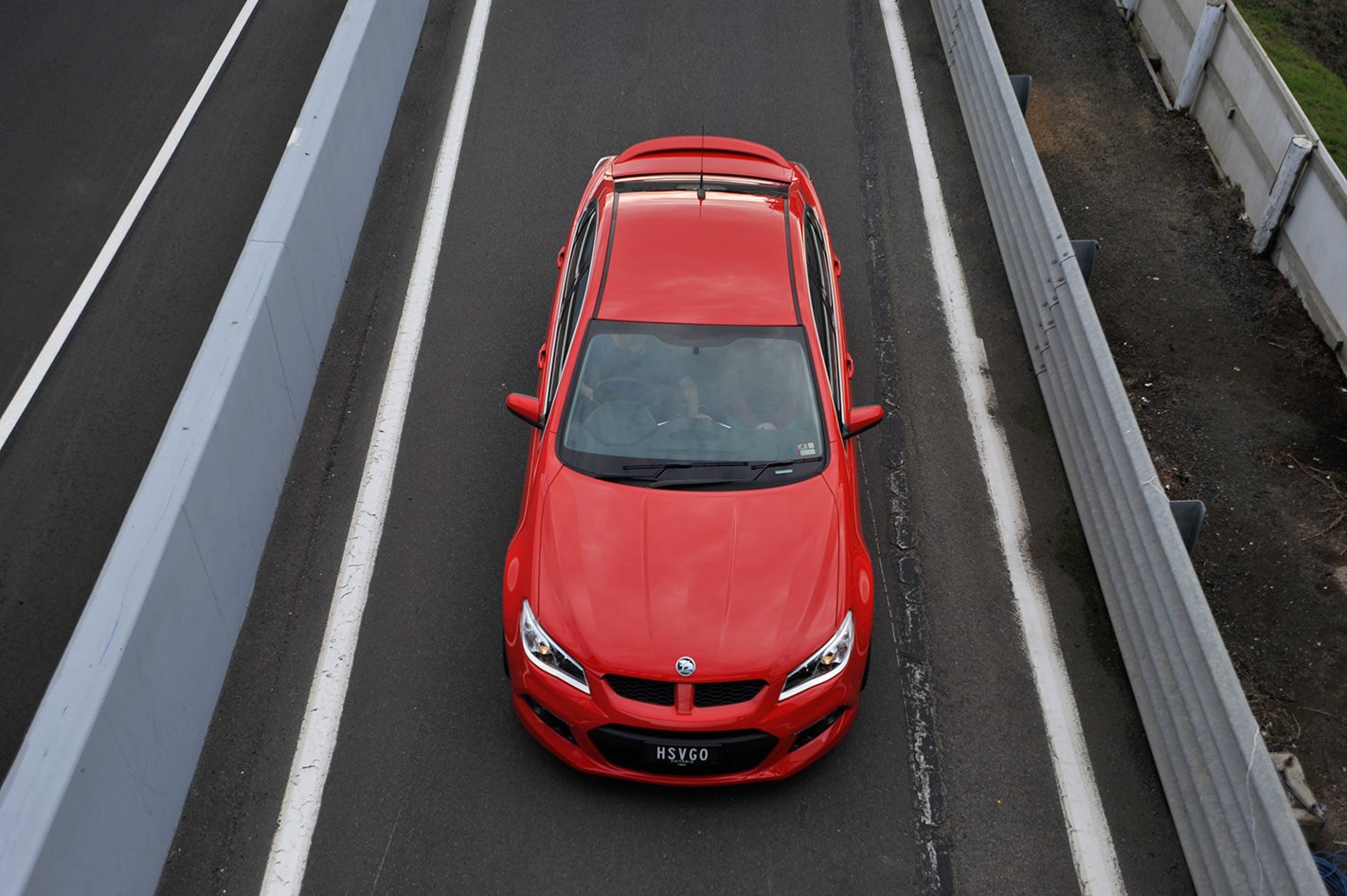 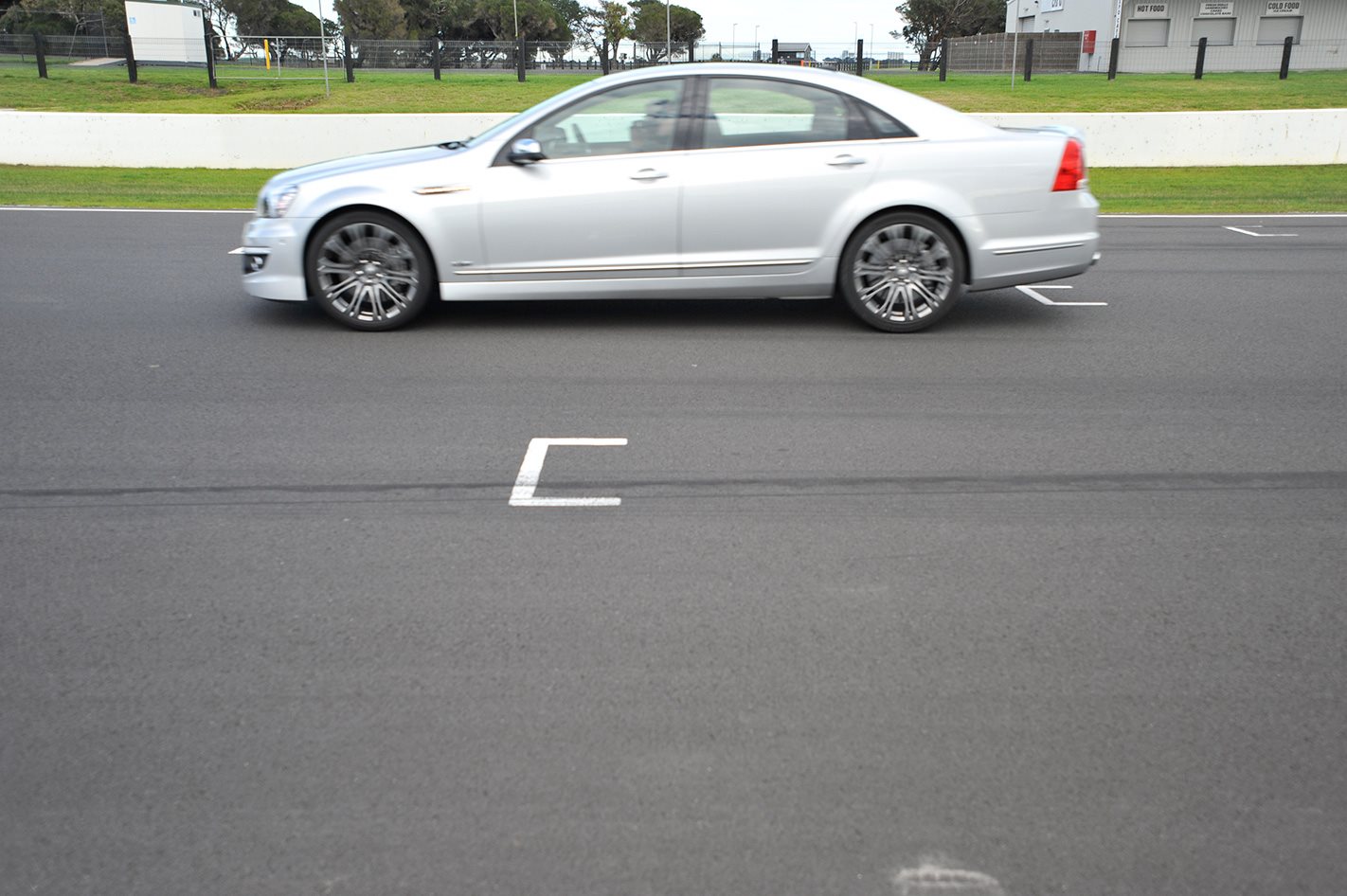 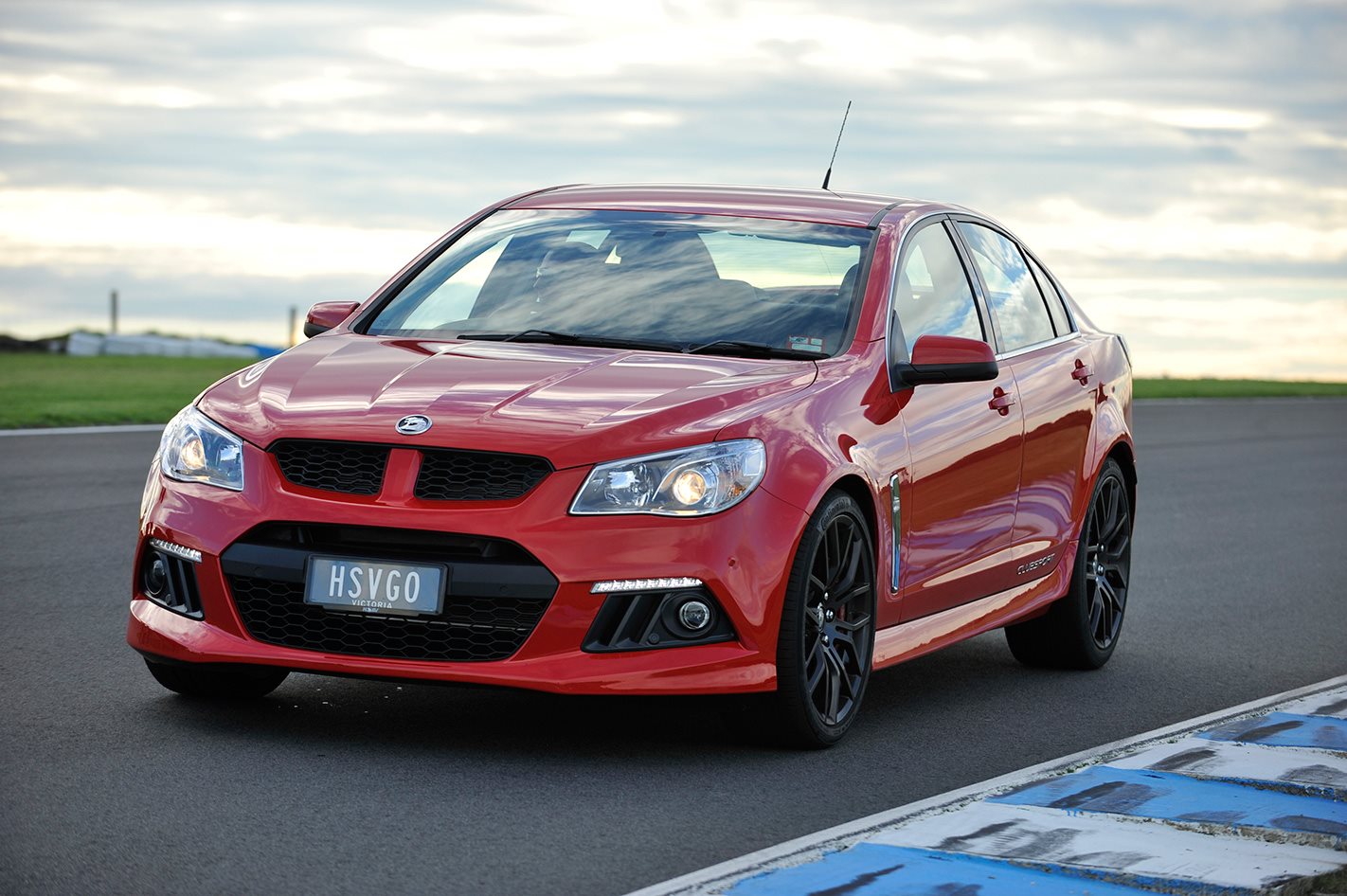 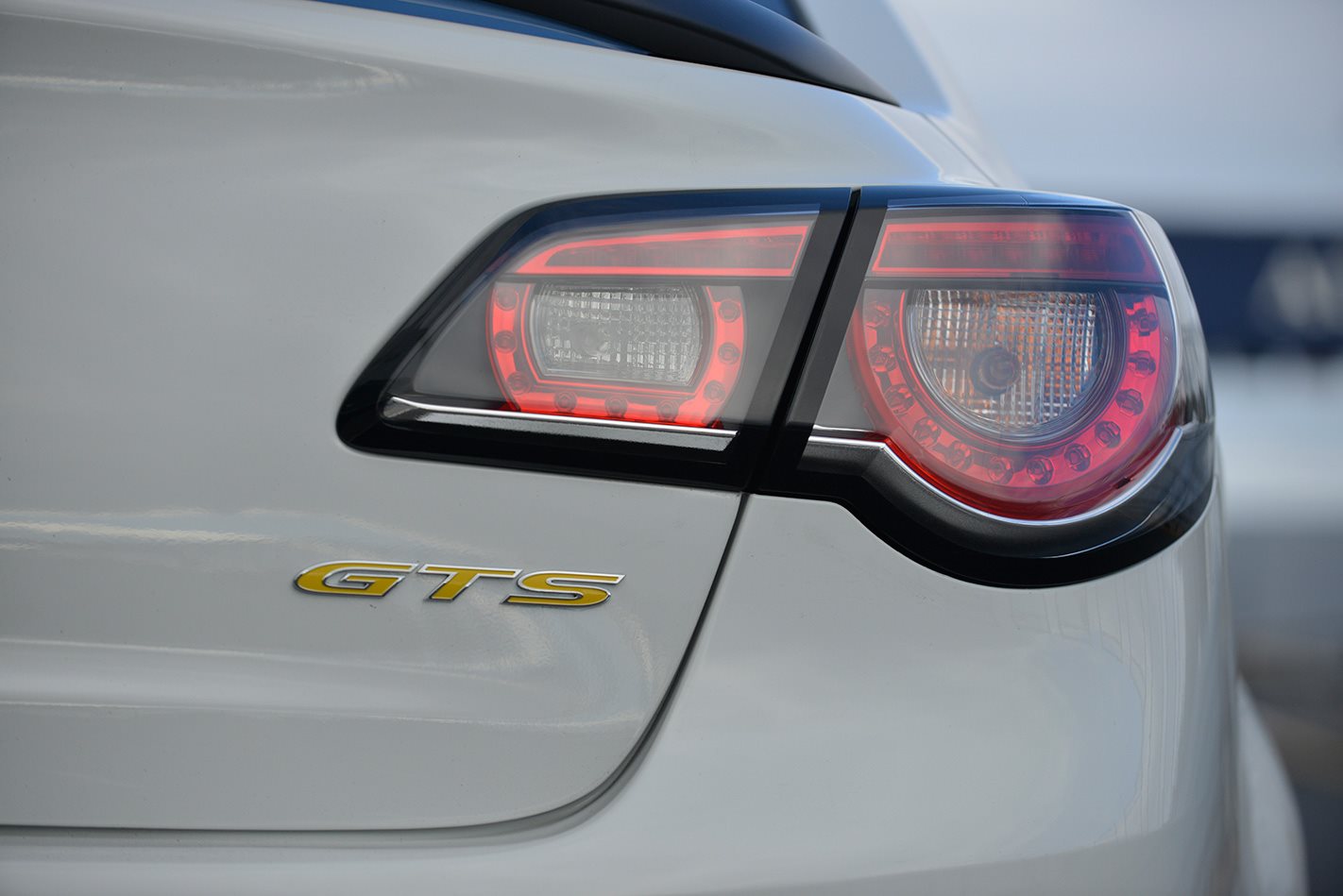 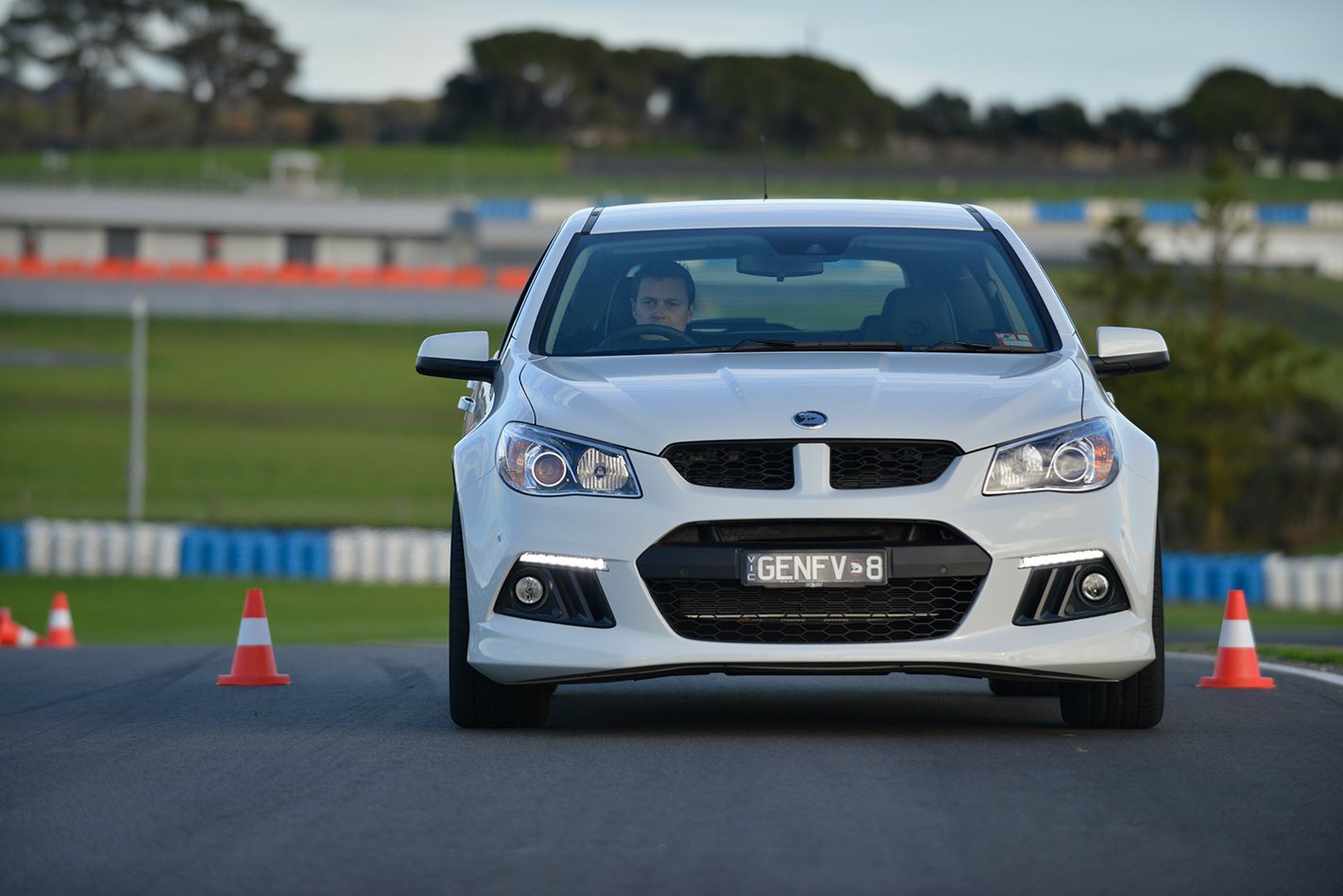 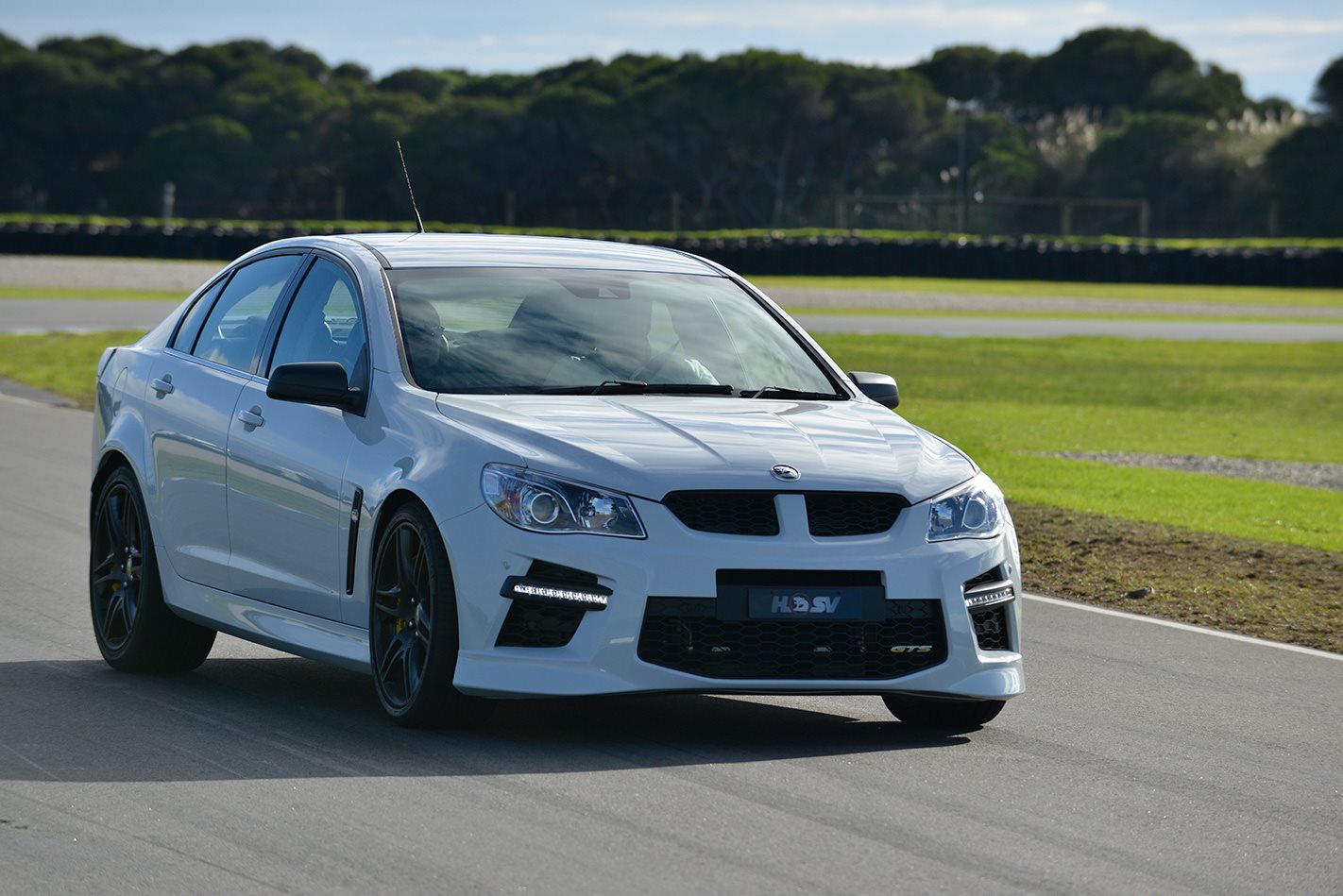 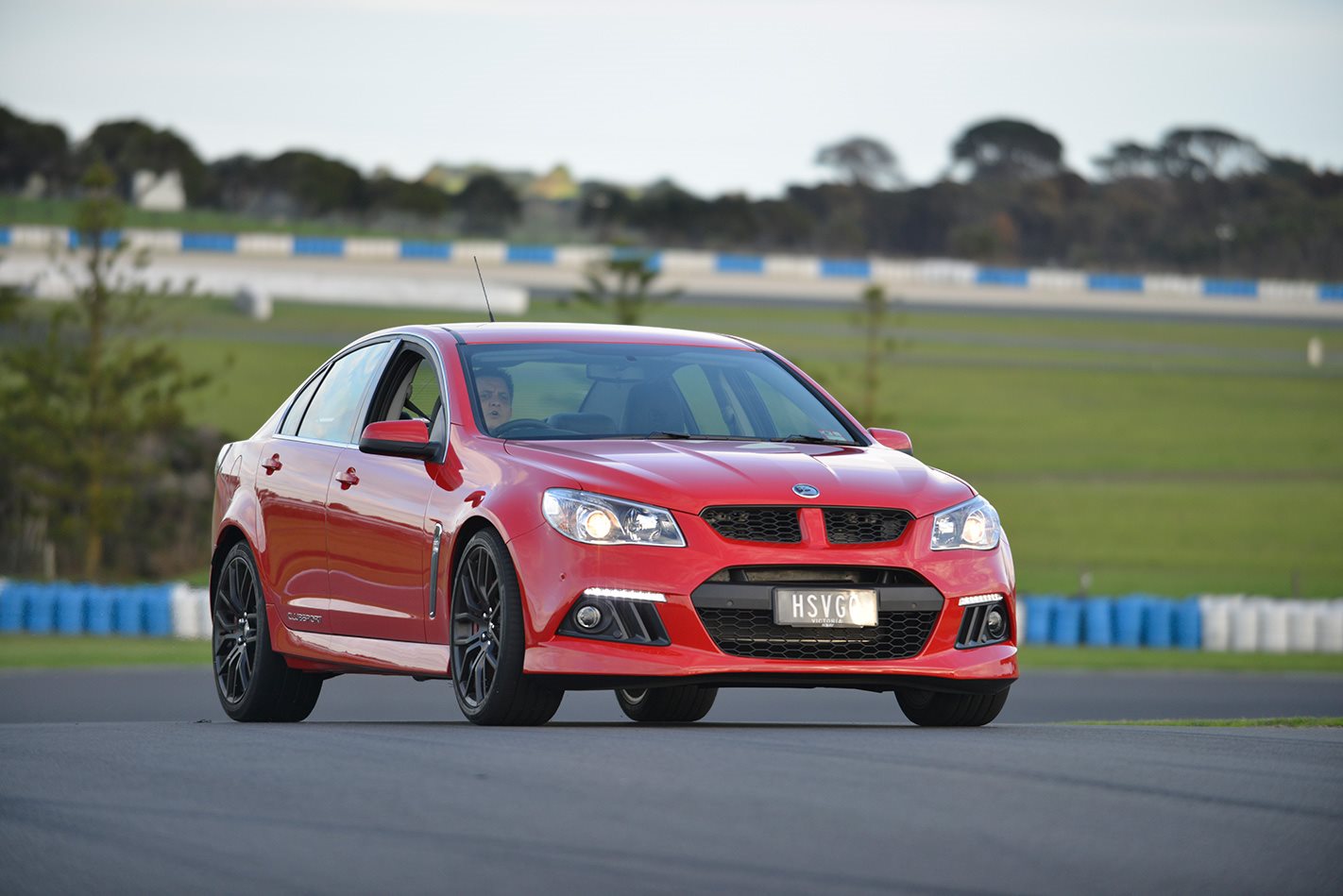 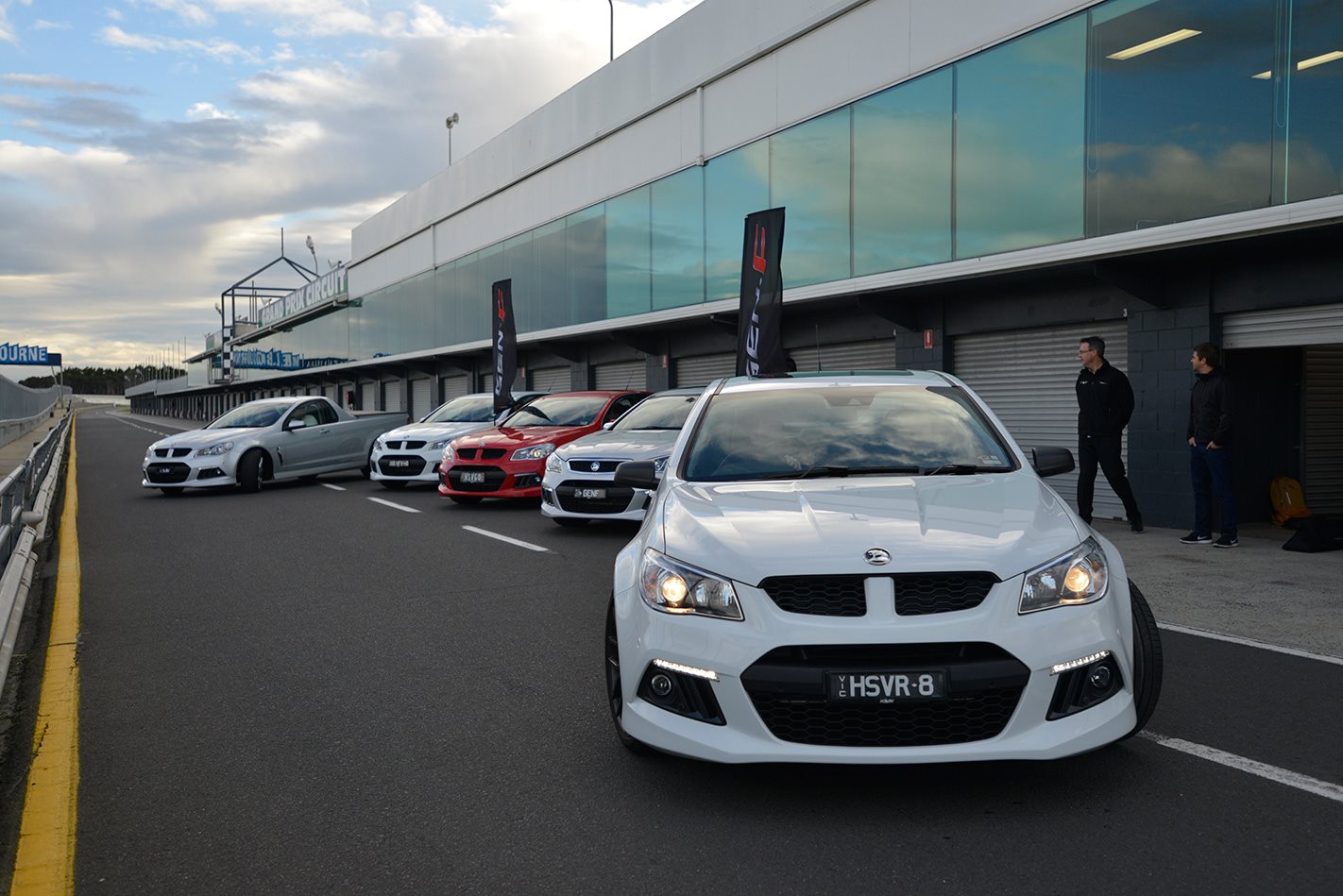 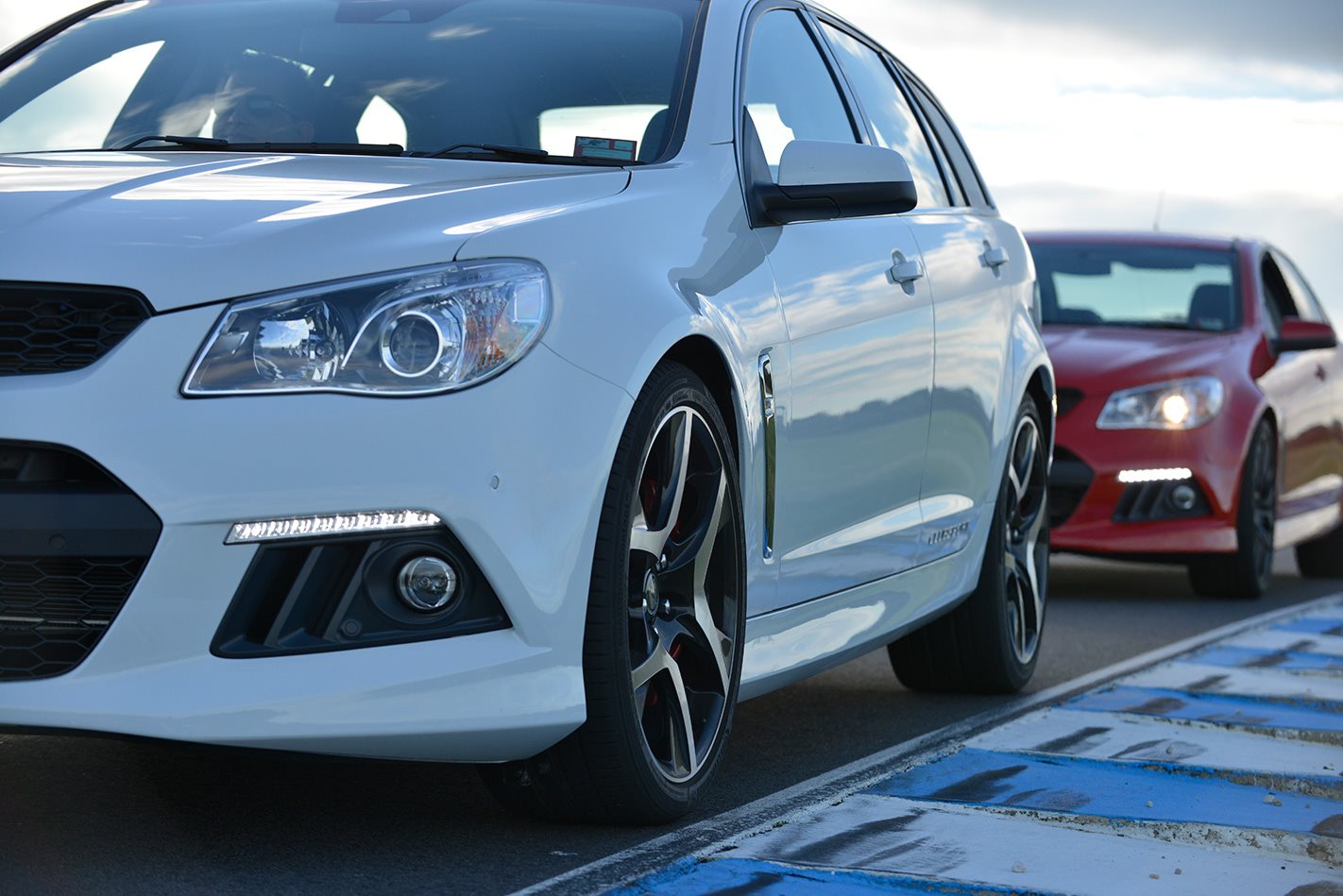 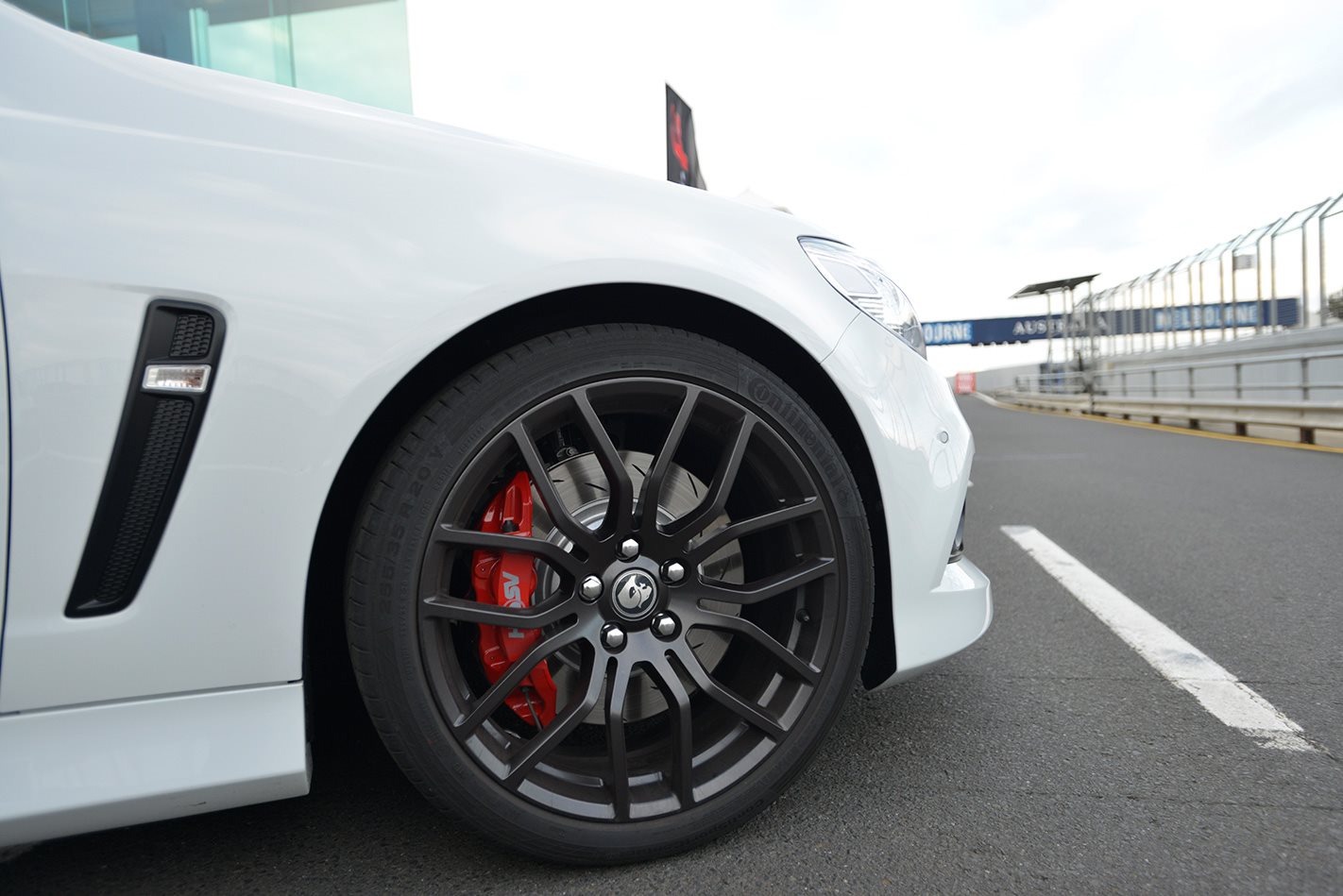 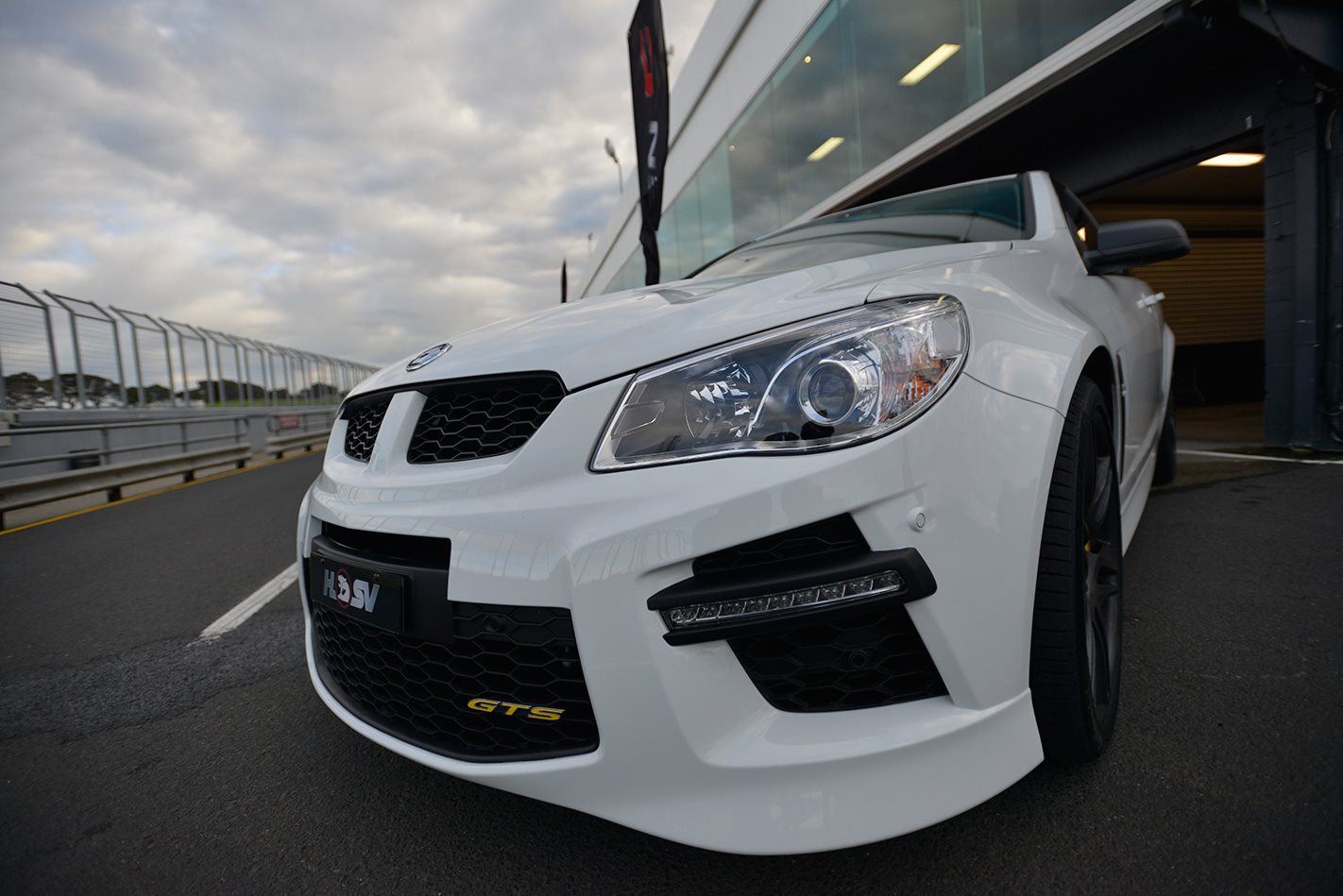 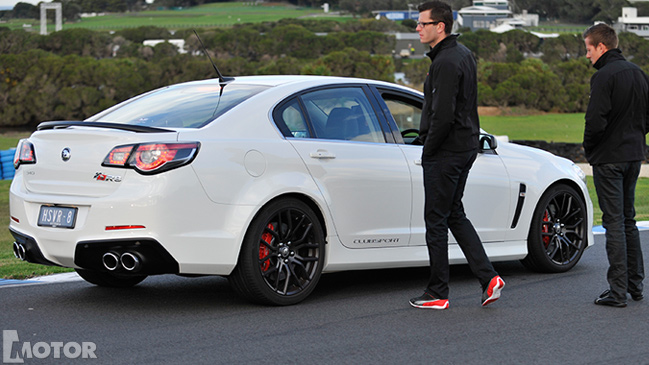 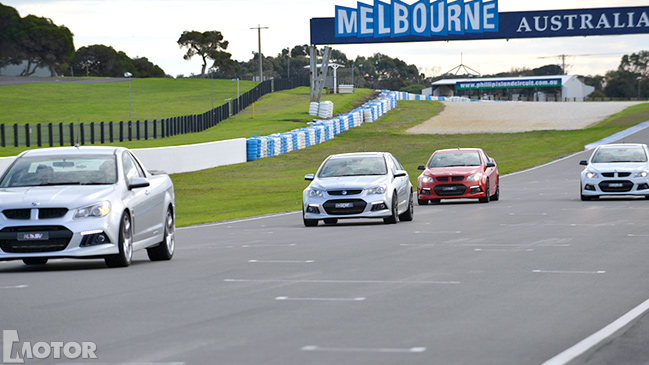 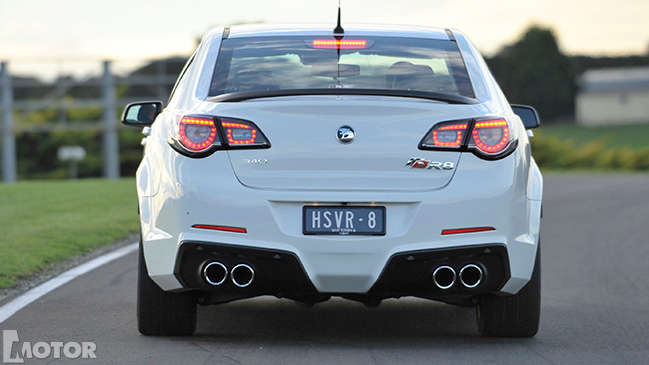