Ever wanted a BMW M4 with more? If the answer is yes, a Melbourne-based BMW dealership thinks it has the answer. And it wears an Alpina badge.

WHAT IS IT?
German motorsport and tuning haus Alpina started life as a small company sticking flyers under the windows of BMW 2002s in railway station car parks, offering aftermarket turbocharger packages. It has since grown to become a carmaker in its own right; something of a BMW sub-brand that gives as much attention to the luxury side of the ledger as it does performance. 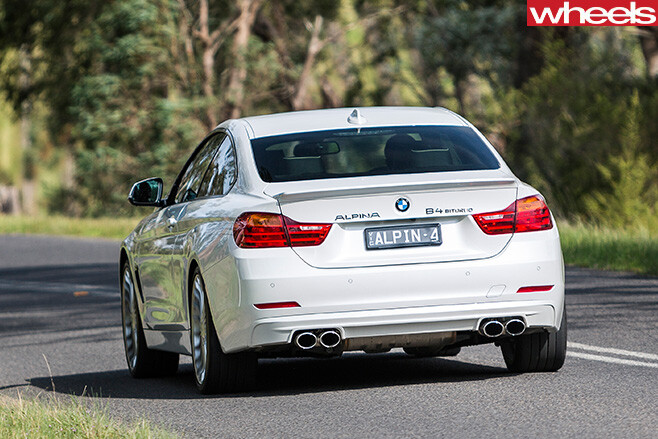 WHY WE'RE TESTING IT
Melbourne-based Doncaster BMW thinks there are enough buyers out there ready to snap up something from what is a very exclusive brand. Alpina only builds up to 1700 vehicles a year for a global audience, so you’re definitely buying something rare. The B4 Coupe tested here, B3 Sedan and Touring, and B4 Cabriolet are the first of up to six models – keep the flagship BMW 7 Series and the box-fresh BMW 5 Series front of mind – that will eventually sell here. Other BMW-based dealers Australia-wide will be added to the Alpina fold over time. THE WHEELS VERDICT
Think of it as an extremely capable and comfortable grand tourer that will easily convince you to drive rather than fly the next time you have an interstate meeting.

PLUS: Exclusivity; individuality; stonking engine; exceptional ride and handling
MINUS: Price; no manual option; would you really walk past an M4 to have one?

Alpina takes extraordinary BMWs and amps them up to extra-extraordinary. The two-door B4 Bi-Turbo, tested here, starts life as a BMW 4 Series but gains a heavily modified 3.0-litre in-line six-cylinder engine with an extra turbo plumbed in, suspension and chassis tweaks, and a more traditional torque converter automatic. Inside, the B4 feels plush. There’s patchworked, monogrammed and extremely supportive front sports seats, leather falls to hand at every touchpoint around the cabin, the steering wheel is finished in parallel-stitched – not cross-stitched like in ordinary BMWs – thread in contrasting Alpina red and blue colours, and the instrument cluster face and kick strips both proudly read “Alpina”.

In the middle of the centre console of our test car is a plaque reading “BMW Alpina B4 Bi-Turbo Coupe 041”, indicating the build number. The B4 looks the business. It also sounds the business, using a modified version of the 2976cc engine block featured under the bonnet of the 331kW/550Nm M4. However, the B4 introduces a twin-turbo set-up to produce less power at 301kW, but a more useable 600Nm of torque.

On paper, the M4 will hustle from rest to 100km/h in 4.1sec; the B4 is only 0.1sec behind it.  It’s the way the B4 delivers its power, though, that’s different. The M4 drives the rear wheels via a seven-speed DCT dual-clutch gearbox, but the B4 uses a ZF-sourced eight-speed automatic. Gear changes in the M4 are raw and visceral, banging through upshifts; in the B4 they seem almost as rapid-fire but slur almost imperceptibly.

Shifting the B4 into its more performance-focussed mode is a little more complicated than in BMW-badged equivalents. There’s still the console-mounted toggle switch for Sport and Sport+ modes, but they only alter the throttle, steering and stability control characteristics. You always need to flick the gearshift into “S” mode to get the auto to hold revs longer. The B4’s forte is rolling acceleration. Stomp the accelerator pedal out of a corner and the Alpina will hunker down slightly, dropping through the gears before unleashing an alarming torrent of torque. This is accompanied by a restrained, edgy, metallic rasp from the quartet of oval Akrapovic exhausts – think six-pot M3 of old – and, if the windows are down to drink in the aural experience, the whistle of turbochargers. Speed builds rapidly, and in a controlled manner rather than a tyre-fryingly explosive one.

Then there’s the ride. The B4 may sit on massive hoops ringed in a thin strip of Michelin 265/30 ZR20 rubber, which you’d think would ride horribly, but even on coarse, lumpy back roads the B4 soaks up perfections with aplomb. Even a section of our road test loop that has found the limit of the bump stops on many a sports car passed by almost unnoticed. The steering is crisp and well-weighted, and points precisely. 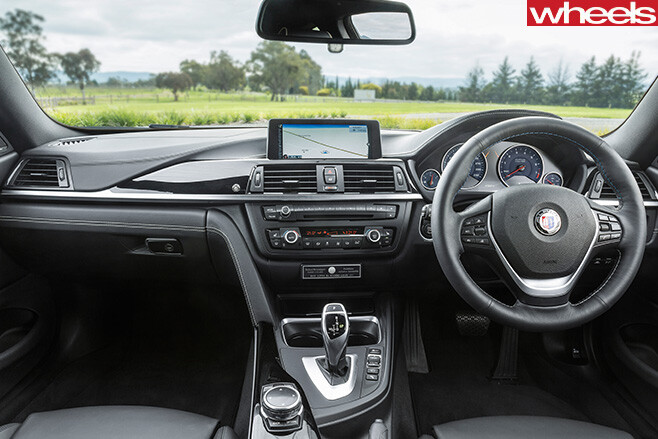 Alpina takes the BMW performance formula of a powerful front-engined, rear-drive coupe and turns it into more of an everyman’s car. But it’s the fact that every man won’t have one that holds the most appeal.