Alfa’s performance flagship finally makes landfall here in Australia. We've been impressed by it on track, but how does the most eagerly anticipated sports sedan of 2017 shape up on our roads?

ALFA'S performance flagship finally makes landfall here in Australia. We've been impressed by it on track, but how does the most eagerly anticipated sports sedan of 2017 shape up on our roads?

WHAT IS IT?
Think of the Alfa Romeo Giulia QV as a Latin BMW M3 or Mercedes-AMG C63 S and you're not in completely the wrong post code. Thing is, Alfa Romeo has a stack of catching up to do in a sector where the Germans have been polishing their wares to a finely burnished sheen in recent years. Even with the best power-to-weight ratio in the division, the chances of the Alfa putting manners on the class benchmarks would appear a very long bet.

WHY WE'RE TESTING IT
The Giulia is the first beneficiary of a €5bn investment in the new ‘Giorgio’ platform that will eventually spin off eight separate Alfa models, so if it’s not up to scratch, Alfa Romeo's future looks bleak. The QV has been developed by a stellar cast of Ferrari's best and brightest, so it should be dynamically on point, but can it bring a broader array of qualities to bear in a market sector where the bar's set in the stratosphere? 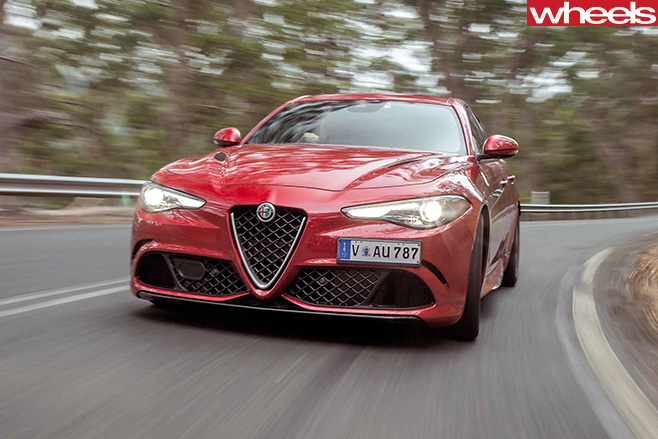 THE WHEELS VERDICT
It lacks the showroom polish of its German rivals, but in terms of its ability to plaster a massive grin across your face, the Alfa Romeo Giulia QV has ’em aced. The most surprising thing about the QV? It articulates the requirements of a modern performance sedan far more eloquently than we could have ever hoped. It won't be for everyone, but even its harshest critic will find it difficult to deny that this is a serious return to form for Alfa Romeo.

PLUS: Searing pace, supple ride, smart drive modes, great driving position, long-distance legs
MINUS: Engine not the most musical, some scratchy interior plastics, we don't get manuals or AWDs 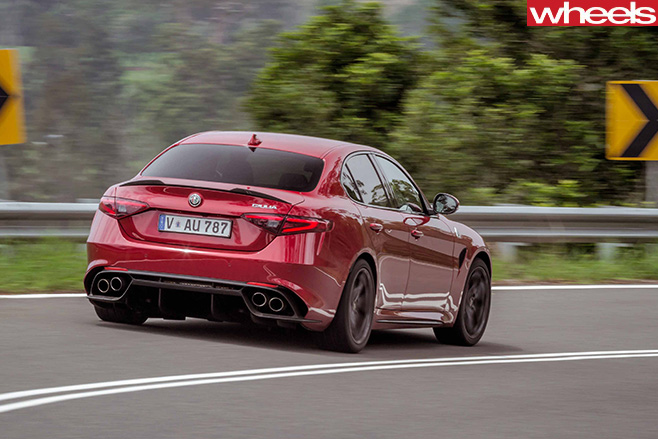 THE WHEELS REVIEW
THIS shouldn't happen. Mash the throttle at the apex of a third-gear corner in a sports sedan with 375kW going to the back wheels and you normally need faster hands than Steve Smith in the slips cordon at the WACA. Yet the Giulia QV digs in, finds grip where none should theoretically exist and catapults away in a melee of bangs and barks. It's but one of the many perplexing qualities of this car; characteristics that time and again leave you shaking your head and wondering how they did it.

Of course, we used to wonder why Alfa had done things. Why their performance flagship was front-wheel drive. Why you'd developed lumbago just leafing through the brochure. Why their dynamics ethos championed an underdamped, out of phase, understeering catastrophe. After so many false dawns we'd all mentally written the Giulia off ahead of time. Safer that way.

You probably know the headline figures already. The 2.9-litre twin-turbo V6 is good for 375kW, sending just 1585kg down the highway. 0-100km/h appears in 3.9 seconds and if you have an autobahn at your disposal, 307km/h is apparently on the cards. There's a carbonfibre roof, bonnet, spoiler, skirts and even prop-shaft. Active aero, a whip-smart ZF eight-speed auto and a fiendishly effective electronic rear diff. A design and engineering team who have the Ferrari LaFerrari, 488GTB and F12 on their resumes have equipped the Giulia QV with a formidable arsenal of hardware. 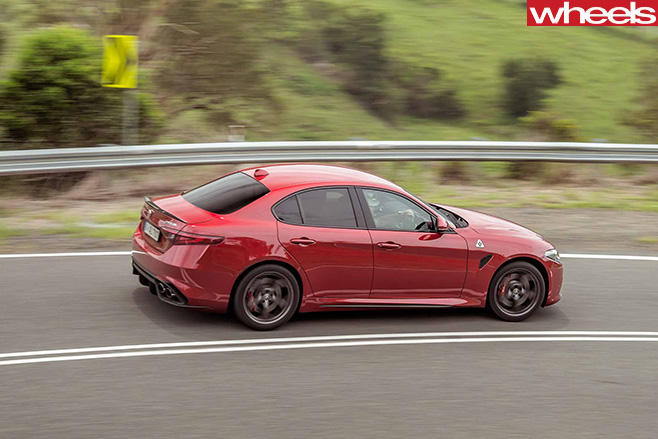 And yet the most impressive thing is the subtlety with which this barrage of new tech is integrated. Rather than dialling everything to 11 and hoping for the best, Alfa's chassis engineers have instead delivered a car that just plain works on Australian roads. There's a refreshing suppleness to the adaptive suspension, and even when it's switched to maximum attack and punted along a heavily cambered and scabrous high-country B-road, it never gets crashy or brittle. The deployment of torque to the rear wheels ramps up as you ascend the gears, Ferrari-style, and there’s Maranello's imprimatur in the steering, which is livewire but never neurotic. A little more heft in Dynamic or Race modes wouldn't have gone amiss; a certain level of trust is required for the work of the front contact patches.

The engine isn't inherently operatic. Some have described it as sounding akin to a pair of BMW i8s at flat chat and there's something in that. The torque band is so broad that meaningful go is rarely hard to find, but it does enjoy being pegged into the upper registers. Knock the lever across into manual and you can ping the limiter without the box changing up for you. The beautiful aluminium paddles are (correctly) column rather than wheel-mounted and in Race mode will crack through upshifts with a real shunt. It's like Lambo Corsa-lite. The QV, like all its turbocharged rivals, injects a bit of street theatre with the fusillade of overrun crackles, but this isn't an engine which will have you searching out tunnels at 3am. 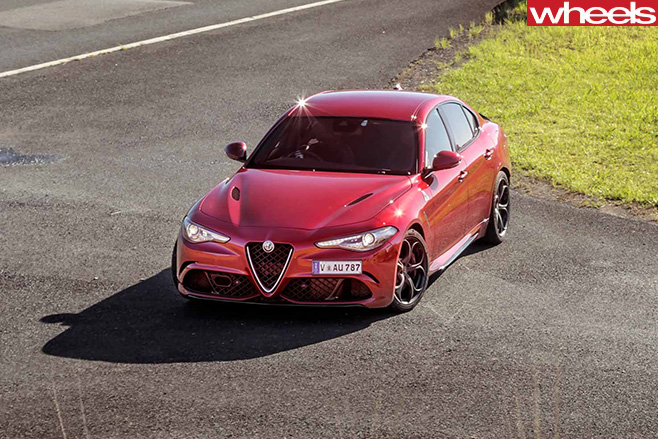 The DNA rotary dial on the centre console switches through four demonstrably different drive modes and you can also select suspension stiffness independently. The steel brakes are more than up to the task, the optional carbon ceramic discs being a little grabby in the first few millimetres of pedal travel. If you're planning on a fair amount of track work, you may consider the 3kg per corner weight saving and $13K pricing to be a reasonable ask. I'd rather direct $7150 at the manually adjustable Sparco carbon-shelled bucket seats which are 8kg lighter but sit you down noticeably lower in the car than the electrically adjustable standard chairs. Alfa claims that the driver's hip point is 13mm lower. It feels more.

The result then, is you asked and Alfa Romeo has clearly listened. The Giulia QV is an astonishing effort, but clearly also a work in progress. And sometimes even astonishing doesn't cut it. We're already shaping to put it up against the heaviest hitters in its class, and that should be one hell of a showdown. One thing we do know, though is that in isolation, the QV is a triumph. 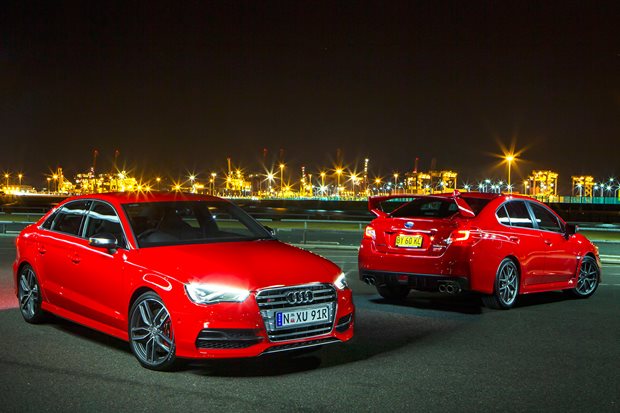