THE Infiniti Q60 S makes for a refreshing alternative to the European set. However, it doesn’t quite supersede them.

WHAT IS IT?
This is Infiniti’s flagship coupe, complete with the brand’s newly developed twin-turbocharged V6 engine and controversial pure electric steering system. It’s a handsome two-door with strong design, a well finished cabin and generous standard equipment. It will come to Australia as the more senior partner to the 2.0-litre turbocharged version.

WHY WE’RE TESTING IT
To see if Infiniti has finally made a car that stands a chance of winning a fair fight against the established players in the premium segment. With 298kW the Q60 S outguns all of its obvious rivals, although performance is blunted by its near 2.0-tonne kerb weight. But with looks and generous equipment levels on its side, it could be the breakthrough Infiniti has been waiting so long for. Despite its space-age steering the Infiniti Q60S is an old-fashioned car at heart – a coupe that delivers both comfort and performance effortlessly rather than aggressively. Infiniti’s minimal presence in Australia ensures it will be of minor interest, but it’s definitely good enough to be viewed as a serious alternative to more mainstream rivals.

THE WHEELS REVIEW
IF THERE’S one thing in the automotive world worse than being talked about, it’s probably being Infiniti. It’s more than 25 years since Nissan launched its premium sub-brand, but it remains the most minor of minority tastes across most of the world, and especially in Australia. That’s where the new Q60 S could help, as a halo performance model. 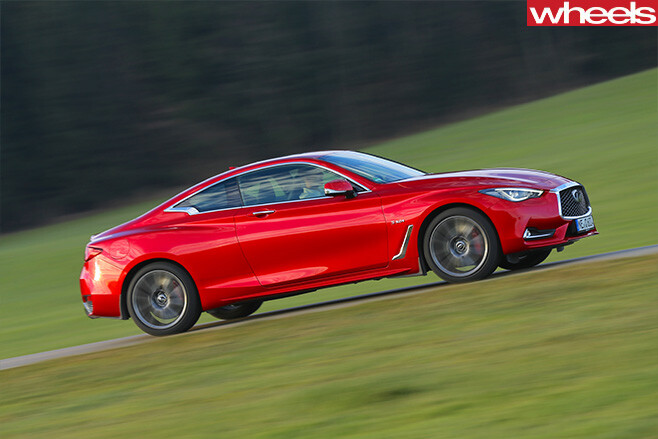 In essence it’s the bigger sister to the 2.0-litre turbocharged Q60 that we’ve already driven, with power coming from a twin-turbocharged V6 that produces 298kW in the full-on guise we tested. (A less powerful 224kW version of the same engine is also being considered for Oz.) With impressive performance and generous standard kit, the Q60 S is aimed squarely at rivals such as the Mercedes C-Class Coupe and BMW 4 Series. In a part of the market where exclusivity matters, the Infiniti’s handsome styling should give it a sporting chance.

The new V6, a heavily developed version of Nissan’s long-serving VQ motor, is an absolute stormer. We’ve already driven it in the Infiniti Q50 Red Sport and most of the same comments apply – some low-down lag turns into serious mid-range punch and keeps pulling to the limiter, which doesn’t call time until 6800rpm. It’s short on top-end aural appeal, and doesn’t feel quite as fast as its raw output numbers suggest it should, because of what’s happening on the other side of the power-to-weight ratio. On EU DIN figures, which include a 90 percent full fuel tank, a 68kg driver and 7kg of luggage, the Q60 S weighs 1892kg – a chunky 250kg more than the BMW 440i. The seven-speed automatic isn’t the sharpest of gearboxes either; there’s no chance of confusing its leisurely shifts for a double clutcher and its manual mode feels particularly dull-witted. 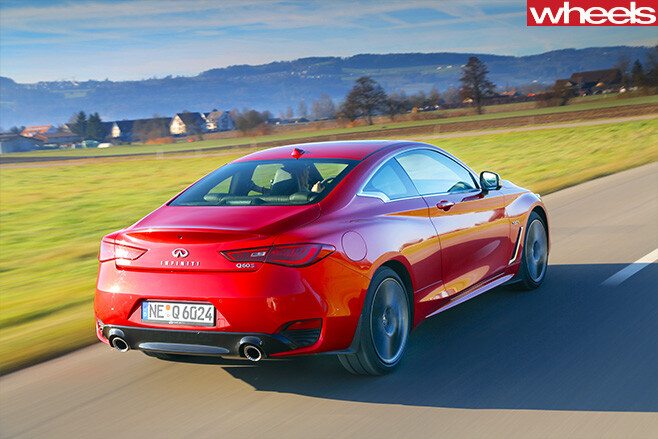 The chassis is decent, but keener on an easy life than a bout of extreme sports. The Q60 S rides on switchable dampers that firm up noticeably when the dynamic mode is switched to Sport or Sport Plus, but that allow reasonable compliance in Comfort. My drive in Switzerland took place on winter-spec Pirelli Sottozeros, which kicked up a fair bit of road noise and struggled to deliver much lateral grip on the cold, greasy surface. The car was also a European all-driver (Australia will get rear-drive only) – but the tyres’ modest limits prevented any on-the-limit assessment anyway.

The slippery conditions didn’t stop me from struggling with the all-electric Direct Adaptive Steering. Software modifications have earned this a ‘2.0’ suffix over the underwhelming system fitted to the original Q50, and although it’s definitely better it’s still not very good, especially when compared with the best conventional EPS systems on rival cars. The Infiniti’s shtick is that there’s no direct connection between steering wheel and front axle except in an emergency (when a clutch closes to create a mechanical link); all instructions (and feedback) are done by flowing electrons that allow reactions to sharpen up in Sport or Sport Plus modes. The weighting is more consistent than the early Q50 and doesn’t change mid-corner, but it still feels artificial, and with feedback akin to being delivered by a video game rig. But, steering aside, there’s still plenty to like about the Q60S. Design is handsome and distinctive, building on the Q50 sedan without sticking too closely to it. The cabin is well finished and stacked with standard kit, including dual touchscreens, and although it’s not as cutting edge as European rivals (and there’s still a 1980s-style foot-operated parking brake) it does feel like a very good place to spend serious time. The very fact the Q60 S will be such a rare beast gives it strong appeal in a segment that often seems to offer nothing beyond default choices.