Infiniti year of consolidation has culminated with the release of its BMW 4 Series Coupe-rivalling Q60.

WHAT IS IT?
Essentially the Q60 is the two-door coupe version of the Infiniti Q50 – think Audi A5 to the A4 sedan – so it’s nothing we’ve not seen before thematically from Infiniti. We’re talking premium medium, then, with lots of gear and a fresh design direction to stamp some authority on the sports/luxury coupe map.

WHY WE'RE TESTING IT
The old Infiniti V36-series G37 Coupe (renamed Q60 in 2013) was one of the more understated and undervalued medium sports/luxury two-door contenders, lurking in the long shadows cast by the more glamorous Audi A5, BMW 4 Series, and Mercedes C-Class coupes. That’s all changing now, thanks to the completely redesigned and re-engineered V37 Q60, bringing some much-needed visual pizzazz. Whether it’s enough to really put Infiniti on buyers’ shortlists remains to be seen. 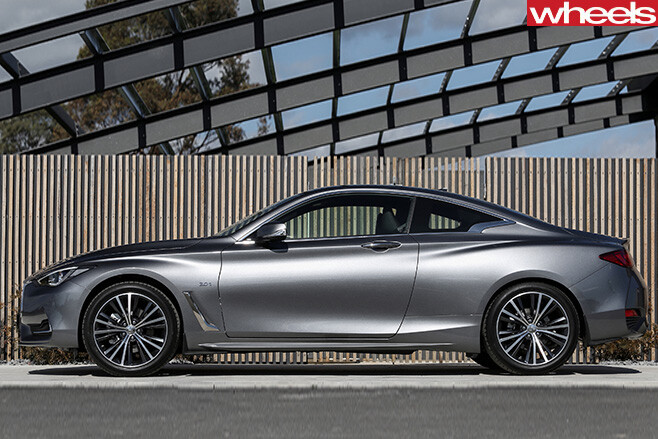 THE WHEELS VERDICT
IF you know your Japanese car history, then it’s impossible not to admire and respect the impact of the Prince Motor Company’s Skyline – an enduring sports sedan/coupe range that has – in its ultimate state – morphed into the giant-slaying GT-R. The less extreme but more mainstream Q50 (sedan) and Q60 (coupe) models, then, are true bluebloods. In the case of the latest Q60 in lower-spec 2.0t guise, Infiniti’s quest to make it look more contemporary inside and out is laudable, but it may have come at the cost of dynamics, since its predecessors’ sound performance, steering and ride qualities just aren’t in the same league as before – never mind fierce foes like the Audi A5, BMW 4 Series, and Mercedes C-Class coupes. Great for posing and feeling rich, not so good if driving is your thing. 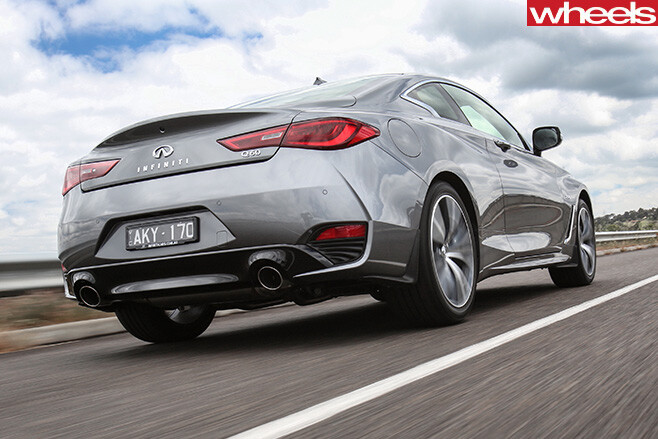 THE WHEELS REVIEW
EVERY brand has its icons. Volkswagen’s is Golf. Mazda has the Mazda MX-5. Even SsangYong has the… umm Tivoli? (that’s our prediction anyway). And Infiniti? Well, clearly it’s six decades of front-engined, rear-drive, high-performance sports/luxury coupes, right?

Since (re) launching in Australia in 2012 with the G37, that’s what Japan’s BMW has been all about, bridging an important line (that included earlier Nissan GT-Rs) dating back to the 1962 Prince Skyline Sports Coupe. 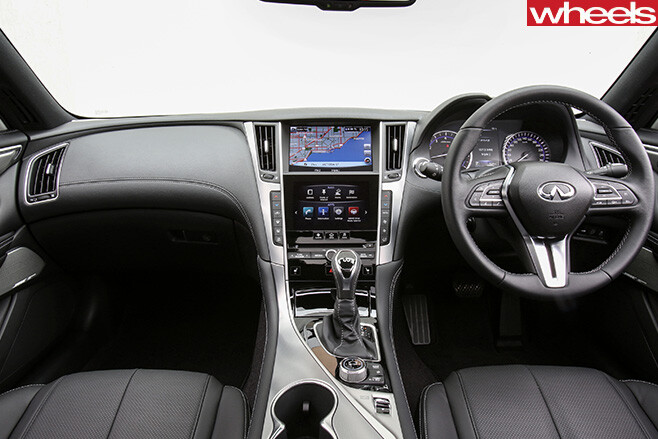 However, some switchgear placement is messy, rear-seat headroom is limited, and we fear the audacious dash designs in the latest Audi A5 and Mercedes C-Class competitors make the Q60’s look like the outgoing Hyundai i30.

Frustratingly, the Infiniti’s status remains complicated on the move too. The sweet 2.0t might spin out a healthy 155kW, but a hefty 1700kg mass, combined with interminable off-the-line lag, seems to blunt whatever sparkle it might possess. And that’s in Sport mode.

Only past 3000rpm does the four-pot turbo find its stride. That said, on the move, the seven-speed torque-converter auto stops behaving like an indecisive dual-clutcher, at last delivering decent mid-range urge. We miss the old atmo VQ37VHR V6 sledgehammer.

More power can’t help the oddly slow and remote steering, though, which, along with the lumpy ride on 255/45R19 rubber, is probably the most profound disappointment. While the weighting is right, the helm feels artificial except on the straight ahead, and reluctant to change direction. Again, even in Sport. There is none of the handling litheness or finesse of the Infiniti’s German rivals. Are the Americans responsible for the dreary dynamic tuning? A rethink is in order, and pronto.

There’s plenty that’s right in the Q60 2.0t, but the driver-focused attributes that made its Nissan, Datsun, and Prince ancestors sports coupe icons appear to have been forsaken at the alter of style.

Despite the lineage, this is no Skyline.