What were the Lexus product planners thinking when they conceived the 2012 LF-LC concept car?

Was it a luxury coupe, or a sports car successor to the mighty V10 LFA, or entirely something else?

Created as a styling concept with no production ambitions, so positive was the Detroit show reception to the dramatically styled LF-LC that at the time Wheels’ position was, “Just build it.” 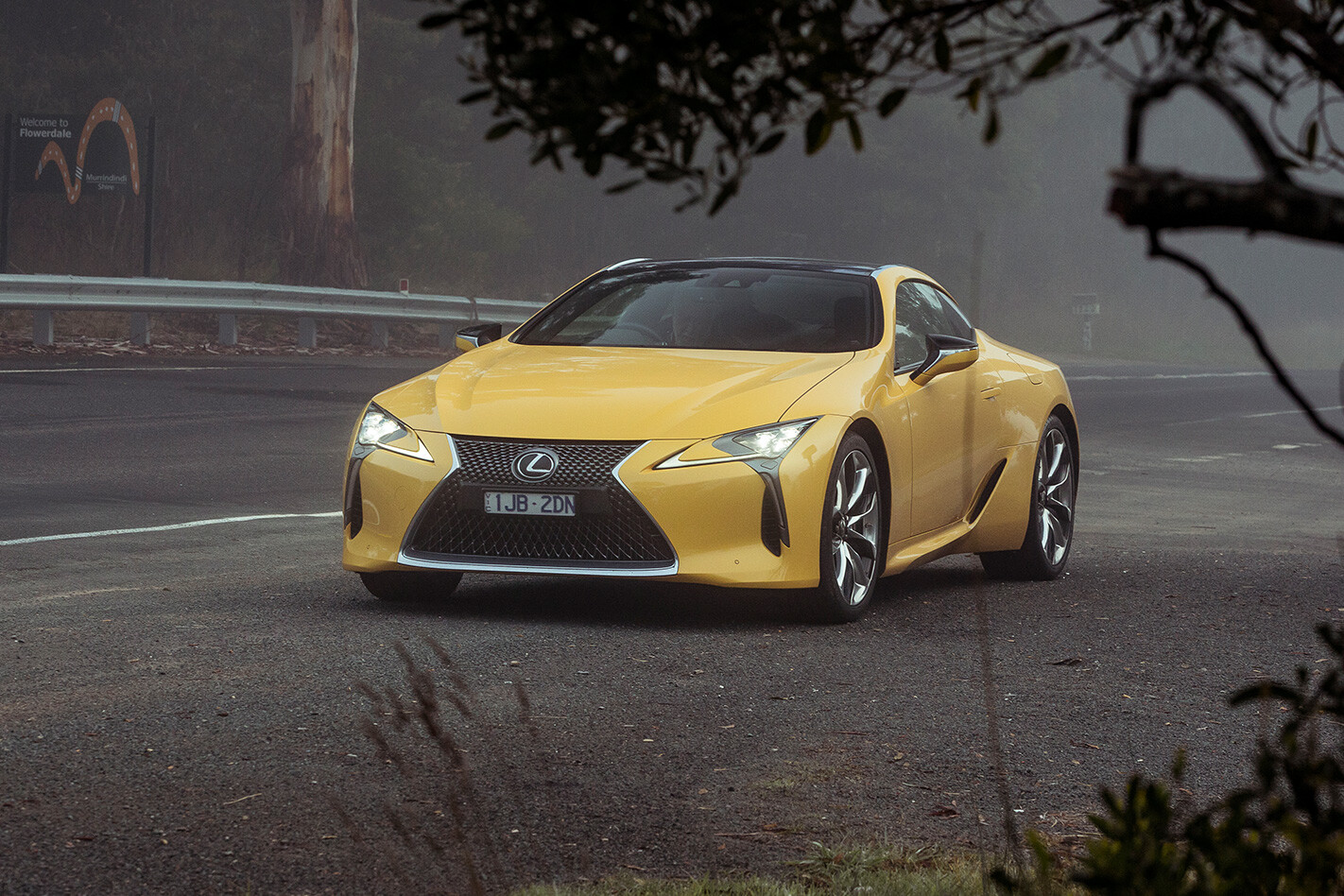 Four years later, looking virtually unchanged from the concept car (though we’re told no panels are common) the now plain ‘LC’ is a production reality and at $190,000, priced well below the competition.

With classic proportions, a forcefully wide stance and a relatively simple shape decorated with lashings of Nike-like swooshes, the LC’s styling remains edgy and distinctive. Aside from the overly large spindle grille, that still resembles an old electric razor and continues to use two totally different cross-hatch patterns, I love the outrageous way this Lexus looks. Confident, proud and truly individual.

Like the car itself. Just don’t expect the most significant numbers to help define its role: the 5.0-litre quad-cam V8 (slightly modified from the GS F and RC F) makes 351kW at 7100rpm and accelerates the coupe from 0-100km/h in 4.7 seconds. Quick, but not supercar-quick and slower than its rivals. The explanation is in another number. The LC 500 is onerously heavy at 1970kg. My subconscious plays with the figures as I point the LC out of Melbourne before turning right at Broadford, our destination some of the great roads that link the Hume Freeway with Mansfield and beyond to Whitfield.

Slowly, while absorbing the ride comfort, the excellence of the seats and driving position, the effortless power and incredibly tall gearing from the 10-speed automatic, and appreciating the need to stir the normally aspirated engine beyond 4500rpm for real grunt, it comes to me. This is no rival for the BMW 650i Coupe or, at the other character extreme, the Porsche 911 Carrera. 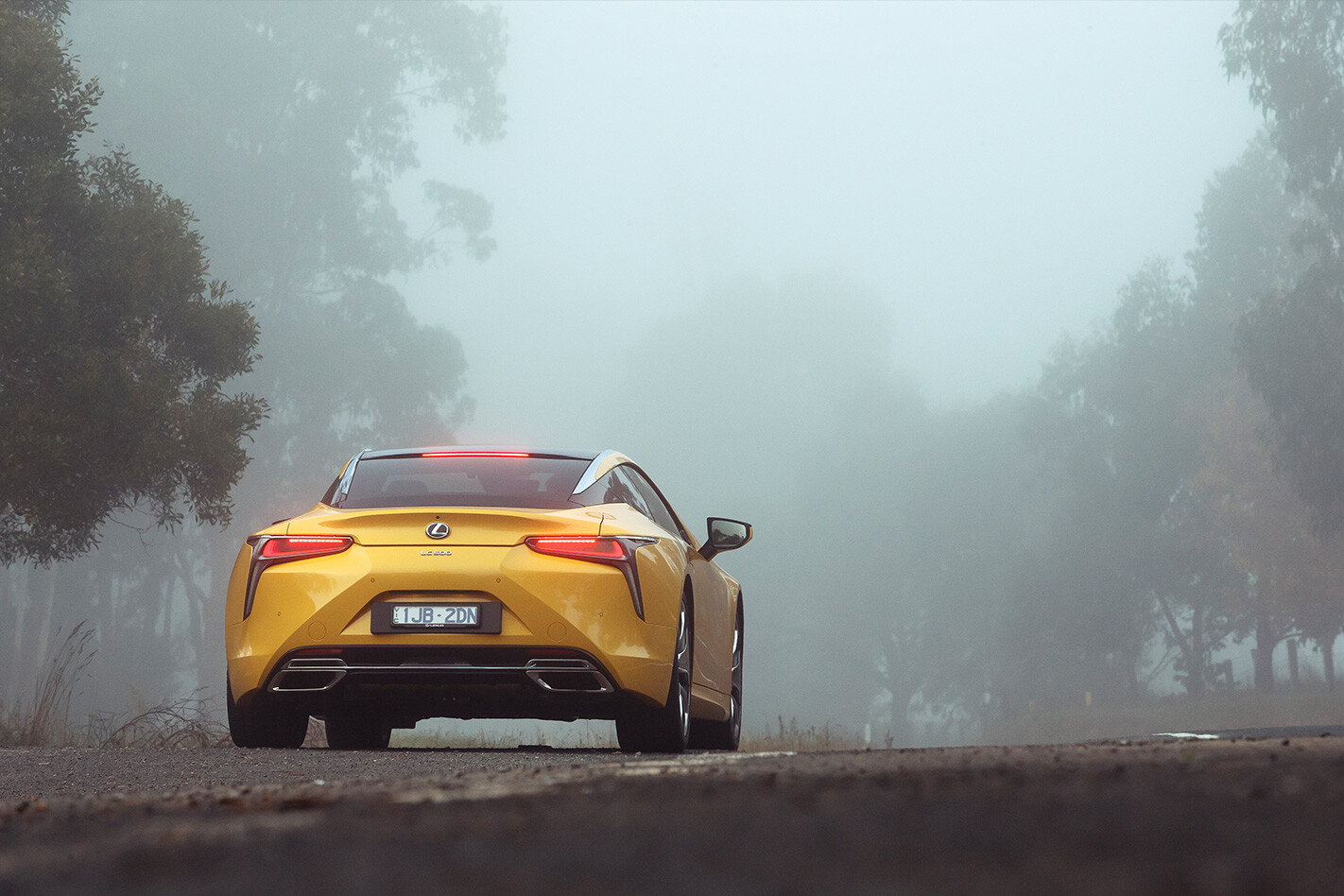 No, in the best possible way, this is an old-fashioned, hushed grand touring car. Nothing less than a contemporary 928, the front-engine V8 coupe Porsche produced, initially as a 911 replacement, from 1977-95. This perception grows as day turns to night and the LC’s qualities (and flaws) emerge.

Not for the LC (at least, not yet), is the all new Lexus twin-turbo, 310kW 3.5-litre V6 that arrives in next year’s fifth-generation LS, the only model to share the LC’s new GA-L (Global Architecture – Luxury) platform that utilises steel, aluminium, and some carbonfibre. For the same money, buyers are also offered the LC 500h, a V6-powered hybrid, though take up is expected to be insignificant. Lexus says the philosophy behind the new platform was to create a more dynamic identity with a lower centre of gravity and, by improving the front/rear balance (52/48 weight distribution), enhanced agility. Massive rigidity and no compromises on equipment were obviously more important to Lexus than lowering the weight. The big, muscular V8 is one of the last of its kind, an engine to be savoured and enjoyed for its glorious sounds, long-legged power and insatiable desire for revs.

No surprise when peak torque of 540Nm arrives at 4800rpm, and it continues to spin freely to the 7250rpm cutout, when the tacho lights up red. As well as being heavy, the LC lacks a dedicated launch program and the lower gears in the 10-speed automatic could be stacked more closely to help acceleration. Seventh is 1:1 and the gears eight to 10 are fuel-saving overdrives.

At an indicated 110km/h the V8 is spinning at only 1400rpm in 10th. A little experimentation reveals that at 110km/h we could choose any ratio from five to 10. The transmission is super-smooth in any up or down situation with only the movement of the tacho needle denoting gearshifts at town speeds. In reality, though, who needs 10 gears? Critically, unless you’re on a motorway, it’s second to sixth that do most of the work. It takes time to learn the fiddly gear selector and most drivers will simply deposit it in Drive and forget it. Certainly that’s what produces the fastest acceleration, the drivetrain up-shifting as the deep-bellowing V8 crests 7000rpm.

Punting hard, now shifting via the tactile paddles, concentrating on the next corner, the driver has little idea which gear is selected, though eventually you realise such knowledge is irrelevant to the driving experience. Compounding the pleasure, the LC sounds fabulous, especially from the outside, and that V8 burble-to-rumble is delivered to the cabin too, via a resonance tube connecting the intake to the firewall.

Despite the 21-inch wheels with 245/40 front and 275/35 rear Michelin Pilot Super Sport run-flat tyres, the LC’s aluminium-intensive, adaptive-damper-equipped suspension soaks up bumps and thumps like a supple, luxury sedan. Road noise is remarkably low, one differentiator from the 928. The electric steering system offers a comfortable, relaxed if slightly distant, feel of the road, though with just 2.6 turns from the linear rack (a variable ratio is part of the optional $15,000 enhancement pack that also includes rear-wheel steering and a carbonfibre roof), it’s quick and, just off centre, also becomes truly accurate. There’s abundant grip and the suspension handles odd cambers, big, mid-corner bumps and heavy throttle applications with remarkable composure, soaking everything up and slinging you onwards.

The LC feels crisp, alive and it’s wonderfully easy to find a flowing driving rhythm, with the result that it’s delectable at pace and capable of playing either a laid back grand tourer or a hunkered-down sports coupe, depending on which of the six modes you’ve selected (Eco, Comfort, Normal, Custom, Sport, and Sport+). This is one of those high-performance cars that’s more at home on a smoothly winding road, than scrabbling its way around a race track. There’s a confidence-inspiring sense that the back of the car is moving in harmony with the front, refreshing when so many big-engined German rivals determinedly let the front end do all the work. 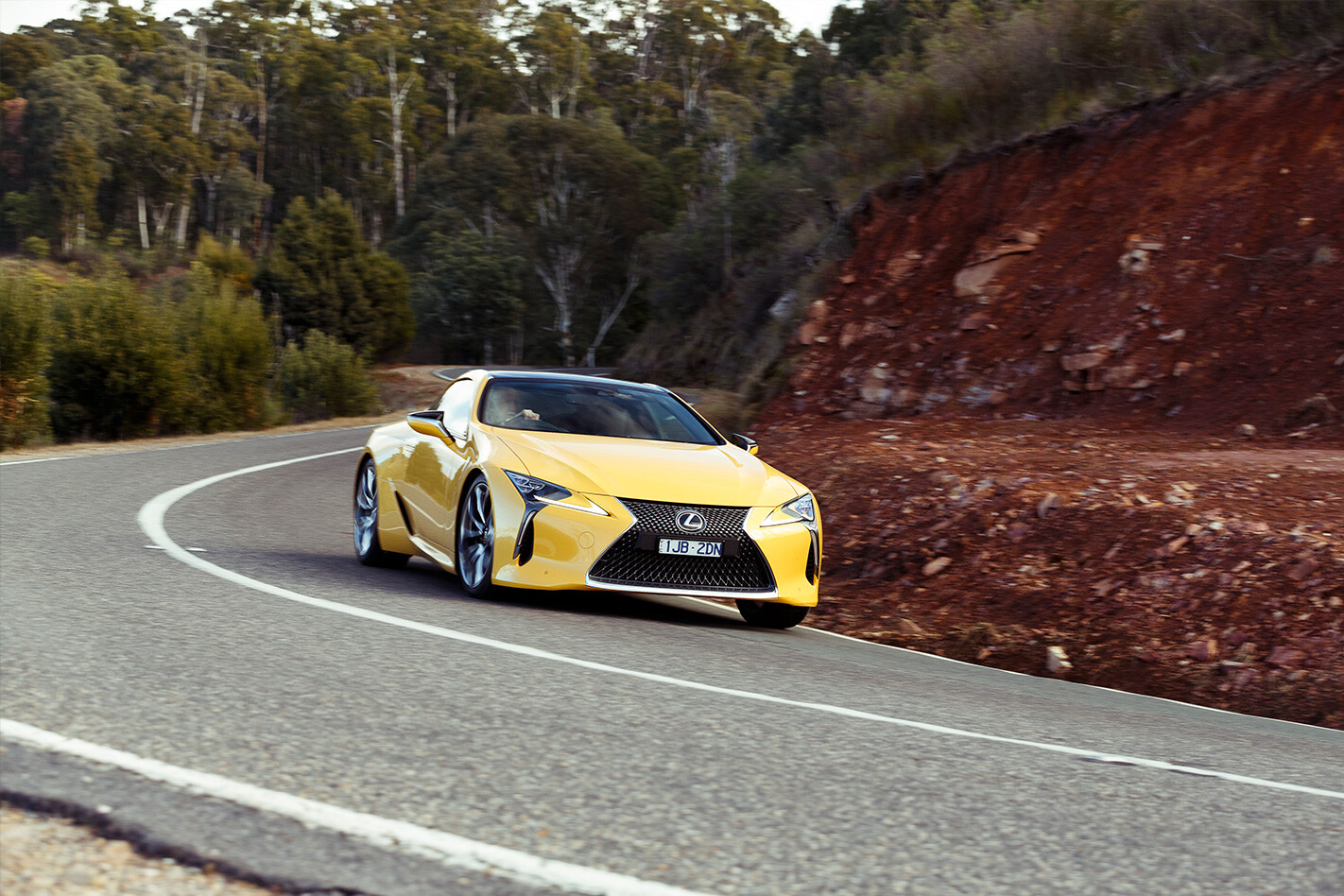 It brakes quickly and confidently, too, though eventually the weight starts to tell and, after a series of savage stops, the pedal becomes a little soft and travel increases.

It’s obvious that the LC is not a white-knuckle driver’s car, but one that cossets you, whatever your talent level, by always openly declaring what’s about to happen. You understand that the engineers wanted ultra-stiff underpinnings, and also for the driver to be enveloped with predictably linear, rather than sudden, responses to chassis and suspension movements.

The interior – with a couple of exceptions – is a fabulous place to spend time, either behind the wheel or as a passenger. Sight lines through the huge windscreen and across the low bonnet are terrific and the near-silent running at a relaxed clip make this a great grand tourer, though the boot is only just big enough for two and the 82-litre fuel tank only allows for a 650km range. We averaged 11.9L/100km on a day of mixed driving, half of which was highway cruising.

The interior is magnificently finished and looks gorgeous, exuding luxury with swathes of high-quality leather and titanium-toned metal elements. The instrument panel’s latest version of thin film transistor (TFT) display technology – introduced in the Lexus LFA supercar – includes a moving and wonderfully exotic central ring dial that houses a tacho, and changes colour depending upon the driving mode.

The instruments in various menus offer an almost bewildering choice of information. The sweeping lines of the dashboard blend beautifully into the contoured door trims. By coincidence or not, that’s a design idea that first appeared on the 928. The leather-wrapped cocoon feeling is exceptional and highlights the design element of having unique driver and passenger door trims that are not mirror images of each other. The passenger’s has an extra grab handle that mimics the one on the centre console, giving the passenger the potential for two-handed bracing. Not that it’s needed, for the seats are exceptionally supportive and operated by near-silent electric motors. The rear seats may be fine for small children, but headroom is tight and there’s literally no leg room behind a tall driver. It’s better used as additional luggage space.

Where the LC fails is with the controller for all things electronic.

Fortunately, basic climate controls are adjusted by actual buttons. Lexus, however, insists on employing something it calls a ‘Remote Touch Interface’ touchpad controller for everything else. The joystick is gone, replaced with a mouse pad.

The pad is flanked by a few shortcut buttons, plus two roller/rockers. All other functions must be accessed with the infuriating touchpad, which blocks access while the car is in motion. 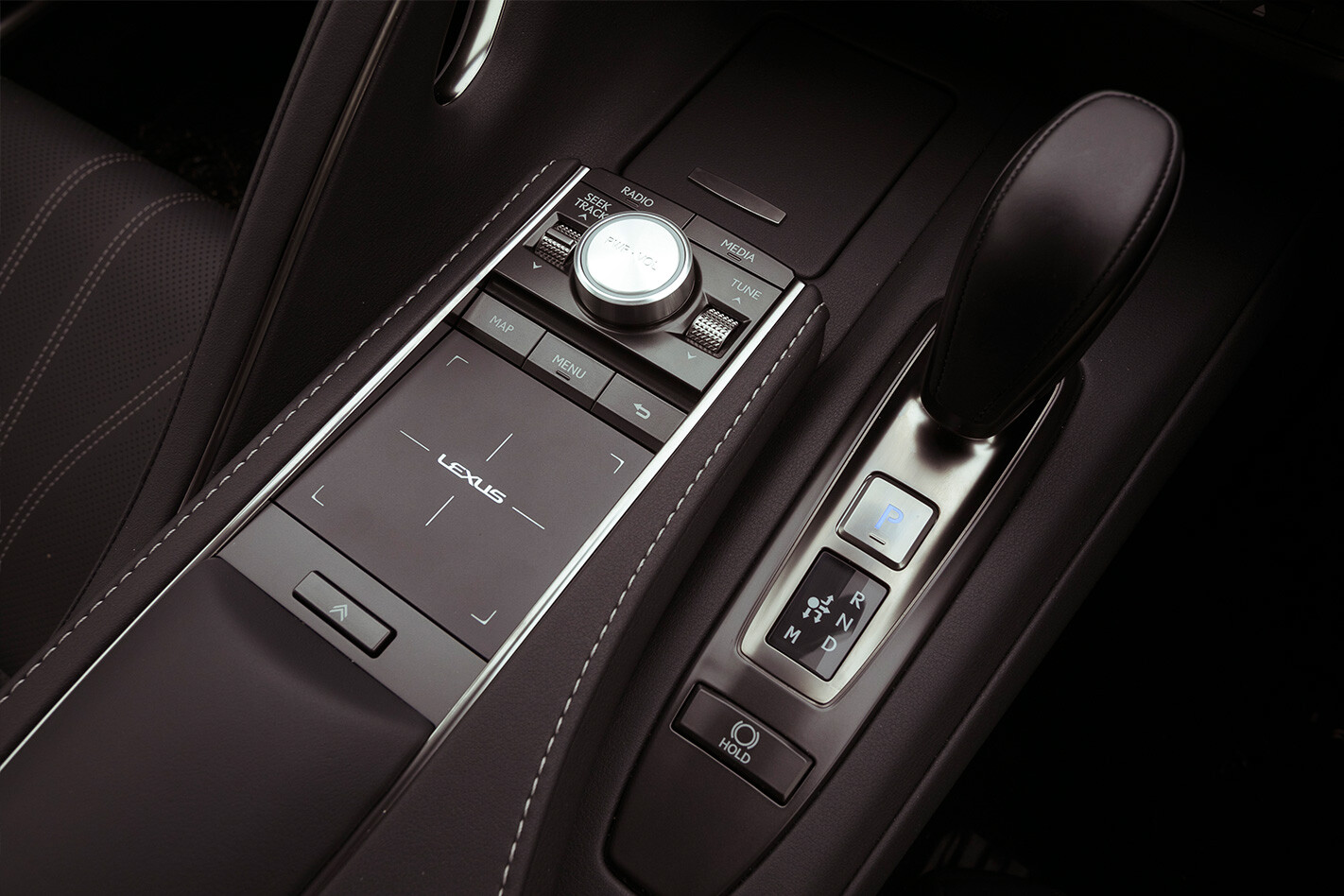 Attempting to tune a radio station or feed in a navigation address feels like a hand-eye dexterity video game. The cursor jumps across the screen unpredictably, half the time unintentionally landing on and selecting boxes you don’t want. This is one of the most distracting systems we’ve ever tried. Fortunately, there is voice recognition.

LC stands for Luxury Coupe, which is an entirely accurate description.

Be in no doubt that Lexus has built a car for the wealthy traveller who would rather drive and enjoy the hundreds of kilometres to a posh hotel or chalet, than suffer the tribulations of airports and rental car queues.

I get this car, though Lexus expects not many people will.

The numbers are small: Lexus predicts around 120 local sales annually from a total global production of just 5500 cars a year. Just ignore the comparative performance numbers and instead delight in the serene GT refinement and the car’s rarity, all qualities that rather remind of the Porsche 928.