More tech! More tech! It’s the catch-cry of both the iPhone generation looking for the next techno-jolly and the world’s governments, hell bent on seeing cars hug dolphins.

Fair enough, provided there’s a tangible benefit. Not to mention a resulting product that doesn’t abandon the essence of the heritage upon which it inevitably trades. Which is, of course, a thinly veiled attempt at casting into philosophical doubt AMG’s decision to equip the latest E63 S with a host of new technology.

And doubts there are aplenty. For a start, the new E63 S is all-wheel-drive, traditionally the wooden stake through the heart of, er, flamboyant driving. The knock-on effect is more weight; now just a couple of fat puppies shy of two tonnes. And what about the engine? Oh yeah, instead of 6.2 litres of pure German schmaltz, the fuel-consumption police have caught up with the E63 S, forcing a move to a tuned-up version of the four-litre, twin-turbo V8.

Doesn’t look good, does it? I mean, weren’t AMG sedans always all about Newton-metres triumphing over grip? Wasn’t the hooligan element in an otherwise red-carpet sophisticate like an AMG kind of the thing we loved most about them?

And can the E63 be made all-paw without turning it into a safe-for-children, nanny-state-approved understeerer? The answer to the first of those question is easy – yes, yes it was always thus. But the third is a bit harder to quantify.

Until you drive it. Then the answer is simple. And also yes: This is still very much an AMG E-Class. Hallelujah.

The point is that the move to an all-wheel-drive platform for Aussie E63s has made a fundamental change to the way the car behaves. But it’s change in a good way. Okay, it won’t inadvertently smoke the rear bags leaving Red Rooster any longer, but should you wish to paste chalkies all over the road, a switch to ‘Drift’ mode will sort that out for you. Enabling drift mode tells the centre diff to send all 100 per cent of this, the S version’s 850Nm (at just 2500rpm) to the rear bags. From there, it’s the job of the mechanical LSD to sort the rest out – which it won’t entirely, but that’s the point – and, before you know it, you’ll be frying P-Zeros. Literally.

The other big change has been the move to the new nine-speed automatic. And, like some previous AMG gearboxes, this one uses planetary gear-sets like any other conventional auto, but ditches the torque converter in favour of a computer-controlled clutch-pack like a DSG or DCT tranny.

It kind of sounds like having two-bob each way, but the multi-plate clutch eliminates the slip of a torque converter and, provided the software and the actuators are sophisticated enough (and they are in this case) the clutch can engage ultra-smoothly (and it is flawless in this regard) to the point where you’d swear it was a torque converter.

Meanwhile, having nine gears has meant the car can still have a low first for getting that bulk moving as well as an ultra-tall top gear (ninth sees 1400rpm at 100km/h) while still retaining the perfect gears for any other speed or throttle position. And let’s not forget, with 850Nm, a two-speed auto would also probably work okay. 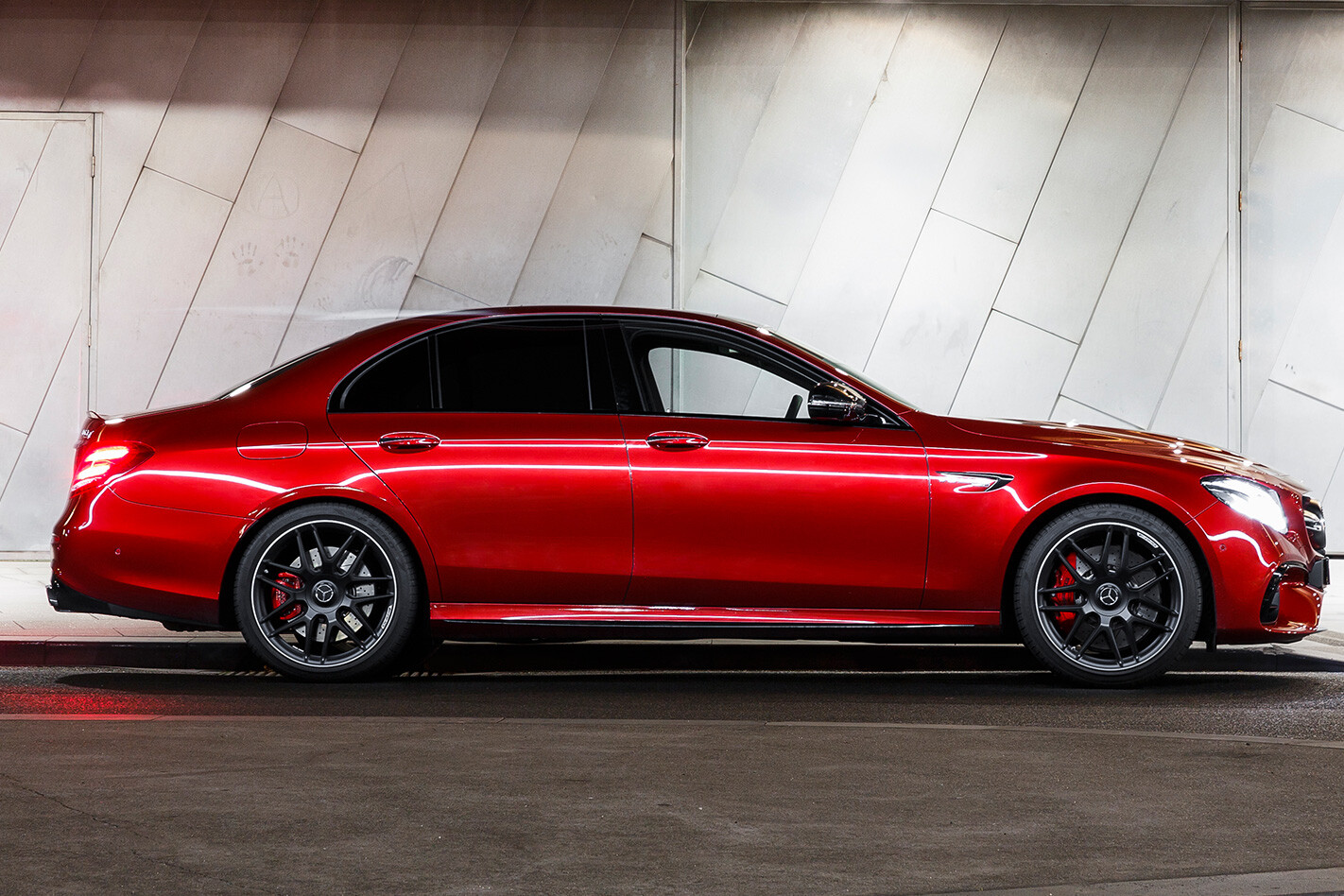 One thing that hasn’t changed is that the E63 S is still a darn big car. There’s plenty of stretching room front and rear and stuff like the double sunroof is  lovely.

The front chairs are equally gorgeous; heavily sculpted buckets that manage to look classy and sporty at the same time and though firm, prove to be super-comfy for long stints in the saddle. AMG offers a more conventional, barge-ass front perch as a no-cost option, and they might yet be the way to go (we’ll get to that in a minute).

The E-Class dashboard is carried over to the E63 S, which means a giant screen spread out before you, rather than actual gauges or gizmos of any sort. It allows for a huge range of views and options as well as conveying the eye-watering amount of info and interface that is part of a car like this.

Our only gripe is that the display itself is a bit two-dimensional and obviously a virtual creation when some other brands do it with a bit more finesse. The other thing that grates a bit in such a sporty machine is the column-mounted gearshift wand which just seems a bit pedestrian. That said, once you’ve got used to it, it allows for super simple (and fast) moves through P, R, N and D. 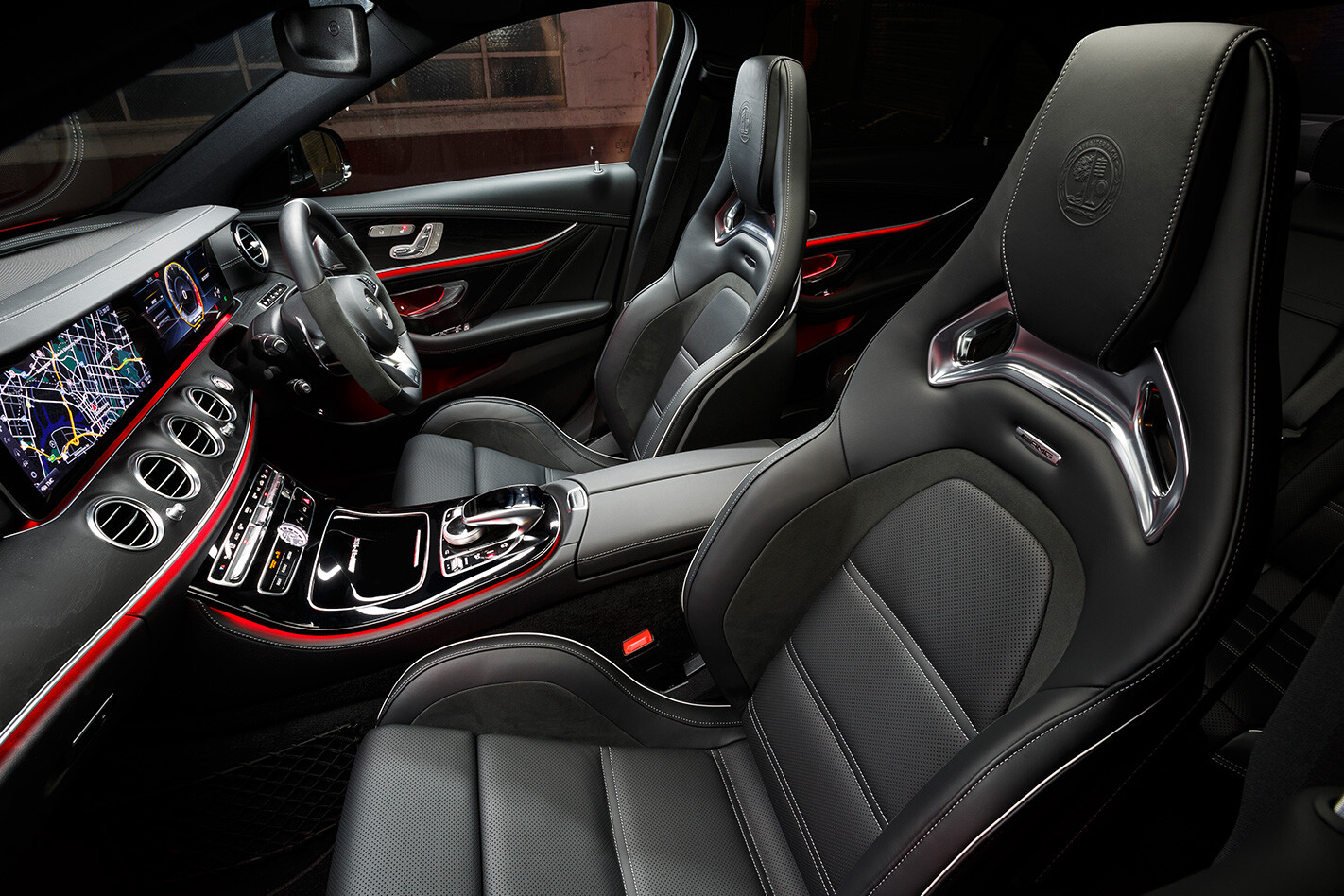 Meanwhile, you’ve  gotta love the attention to detail in the displays and the sort of info they convey. For instance, there’s a part of the screen dedicated to the tyre inflation pressures (in real time, of course) which also gives a readout on the temperature of each tyre. Not sure why I’d need to know that at a glance, but it’s there anyway.

One-upmanship at the pub has never been easier. And while that sort of stuff could cloud the issue on the move, once you are up and running, you tend to rely on the head-up display for the vital stats anyway.

Certainly, if you’re a-wailing on the gas pedal at the time, you won’t want to be looking at anything but the horizon which, as a result of 600 horsepower, is a fair chance to be rushing up to greet you.

Not that there’s any fuss or hysterics at the time; the engine remains calm and smooth (even with the active exhaust flaps open) and just creates more urge the further you push the graph on that head-up tach readout. The other useful piece of new tech this time around is a launch-control system that actually works.

Previous AMGs have offered such software, but it usually only seemed to help fry the bags, not the other way round.

Now, with the super-slinky action of the tranny’s clutch packs, walking the car off the line (which was the fast way previously) is no longer the way to go. Nope, what you do now is select either Race or Sport Plus from the drive mode selection, stand on the brakes, hop on the noise with your other foot and, when you’re ready to enter orbit, let the brake pedal loose. 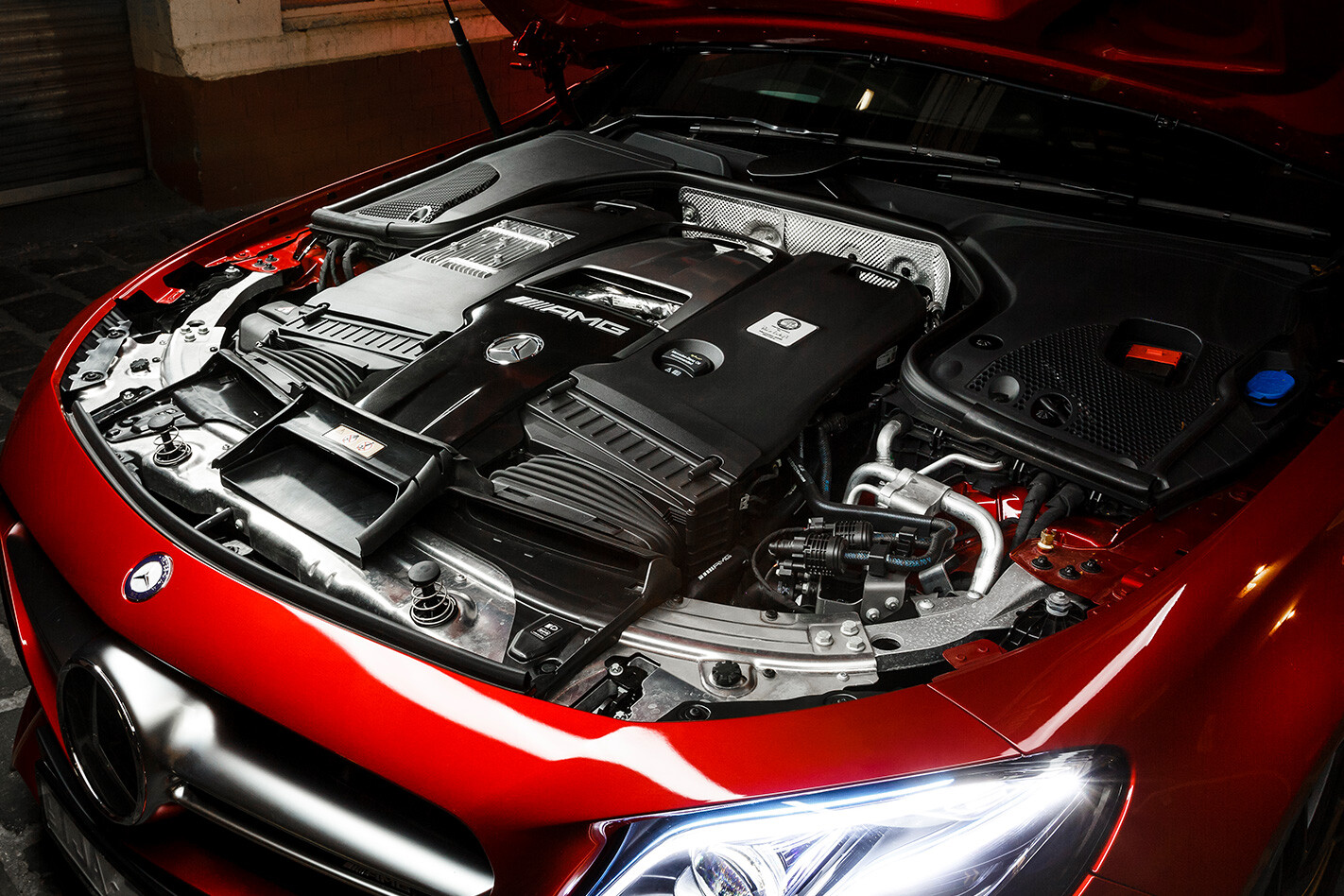 Like the AMG A45 (which is the other of the brand’s products to feature effective launch control) the Race Start (as AMG calls it) shaves nearly half a second off the 400m time and similar amount from the 0-100 interval. And it fairly bolts off into the distance.

The only catch is the Race Start function was a bit elusive in our test car, with the on-board diagnostics determining that the oil level was first too low, and then too high (once we’d topped it up) for us to be trusted with Race Start. So we got but one run with it. Regardless, the results speak for themselves, and the system doesn’t feel like you’re murdering the car in the process.

Experience of another E63 S says the low-oil warning is a theme, but also that the factory 0-100 claim is absolutely fair dinkum and maybe even a tad pessimistic.

In the real world, that sort of shunt translates to a car that is ridiculously easy to punt fast. In fact, too easy in Speed-Camera Land, and that damn head-up speedo is of the creepin’ Jesus variety. In fact, even with the gearbox in Park, the handbrake on and the car locked in a concrete bunker, the E63 could still be doing 20 or 30km/h. Which brings us to our major gripe with the E63 S. Given that this is an E-Class, after all, and not a C63 or an AMG GT, there’s a sense that the E63 is just a bit too keen for a punch-up. It’s always on the balls of its feet; always looking for a chance to slip its moorings and head for open water.

The diff is tight to the point of being cranky in car parks, the ride is too firm regardless of what setting the air suspension has been set to. The gearbox is overly eager to interpret a shove of the throttle as a bank-job getaway and the whole thing just needs to take a chill-pill and wind itself back a notch or two.

The Comfort setting is a misnomer in this case, and we can’t help but think most E63s will be used for the school run or to transport business clients at some point, and that’s when the non-existent Comfort Plus (or even Comfort Plus Plus) setting would be most appreciated.

It’s a noisy bugger, too. Most surprising is a small amount of dump-valve action that you weren’t expecting, although it’s never more than a politely muffled sneeze. But those tyres on any sort of coarse-chip surface will have you yelling at each other inside the car.

I can appreciate that this is an AMG after all, and you should, by now, know what you’re buying into. And I also recognise that AMG needed to differentiate the E63 S from the new E43. I’m also aware that Mercedes’ market research is vastly more likely to pan out than my based-on-not-much observations.

Which is to say, I’m not calling the end result a mistake because I honestly believe this is how AMG always intended the car to be. I’m just not quite sure I’d be immune from tiring of it after a while which, given the overall impact of the thing, seems an odd thing to say.

It’s also where those Beyonce-spec front chairs might come into their own. Let us also not forget that AMG cars have been criticised for their ride quality – or lack of it – pretty much from day one, so I’m hardly starting a new thread here.

It’s also true that the faster you drive the AMG, the better it gets. Up the ante to 140 or so and the dampers and springs suddenly start to communicate. The already-sharp steering gets better and the gearbox calibration starts to make sense.

Trouble is, in Australia, those are hand-in-your-licence velocities. So while you can’t, in normal circumstances, ignore the sheer brutality of the E63 S, neither can you sidestep the fact that this is a four-door, five-seat sedan with performance that will hold its own against bona fide supercars.

And like I said, provided you know what you’re getting into, you won’t be disappointed.