Ford has not yet fully met the raging demand for the 2017 Mustang in Australia – the second largest market for the pony car after the US. But it’s already time to focus on the new 2018 model.

Due to arrive in the second half of this year, the next iteration of the 54-year old muscle-car brand doesn’t mess unnecessarily with the successful, tyre-shredding formula. It just makes it even better.

There’s more power, more noise, more grip, better handling, greater comfort and a stack of new technology to keep it all under some kind of control. Sound good? It is. Better than the 2017? No question. The good news starts with the drivetrains. The 5.0-litre Coyote V8 now has 37kW and 39Nm more than the ’17 car, bringing the total up to 343kW. Those gains were achieved by, among other details, the use of new higher compression heads plus dual high and low-pressure fuel injection.

The EcoBoost 2.3-litre lump retains the same max power output of 233kW but gets another 41Nm of torque. This has been wrought from the engine using an overboost code refined from the Focus RS.

The really big news, though, is in the gearboxes. Both the V8 and the turbo-four can now be specced with a 10-speed auto ’box – a relative of the 10-speeder fitted in the all-conquering F-150 Raptor. This allows both engines, but especially the smaller unit, to remain smack in the middle of peak performance. There is also a six-speed manual option on both cars that’s been reworked to handle the extra torque.

On the V8 cars, it now includes a twin-disc clutch and dual-mass flywheel. Both help smooth the clutch action. Ford looked at, but resisted, the idea to add auto rev-matching to the manual. It isn’t ruling it out for later models. 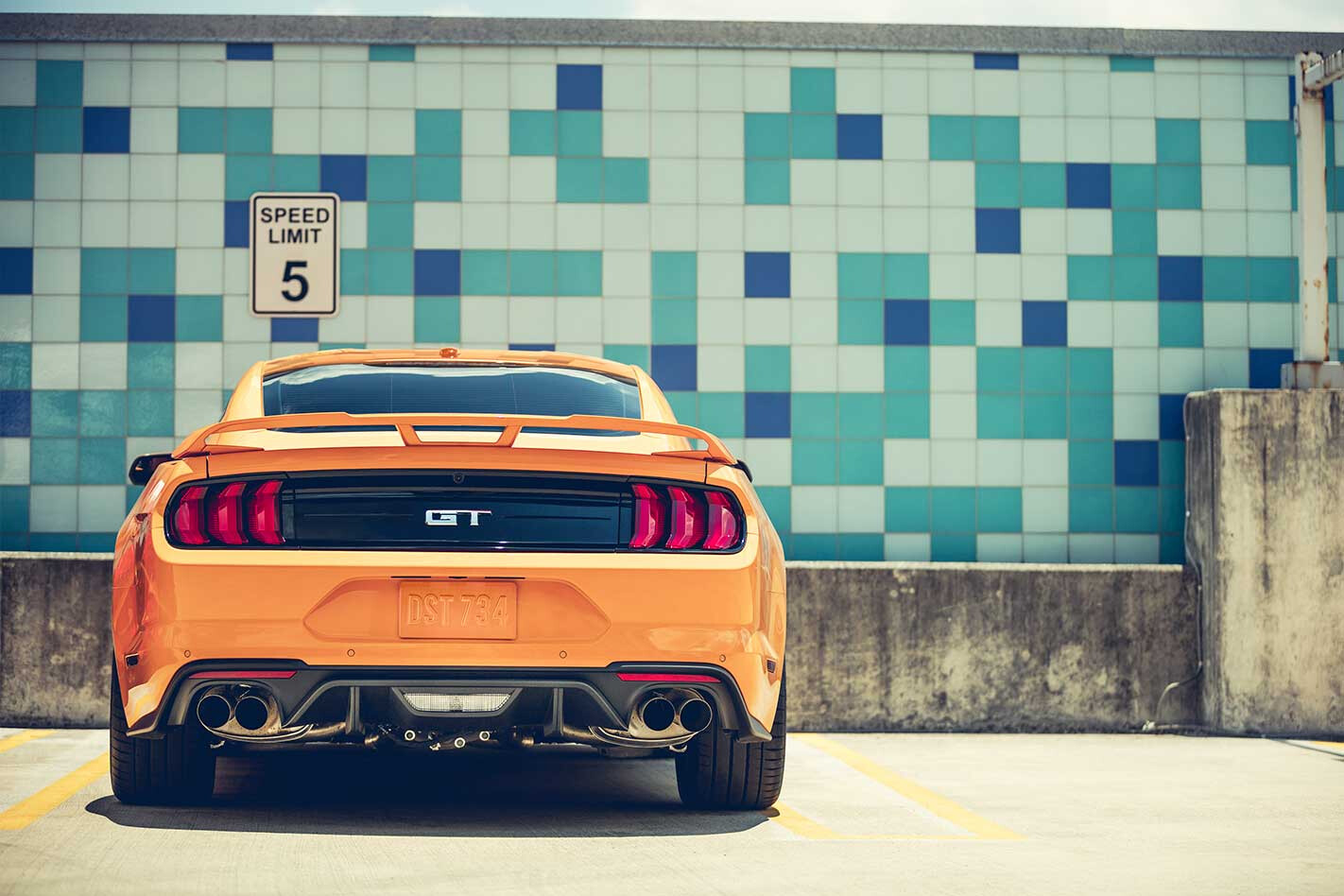 In the chassis department the across-the-range headlines are revised shocks for better ride quality and stiffer rear stabiliser bars and suspension to sharpen up the steering and handling response. But there is special interest in the optional Performance Pack cars, which now ride on Shelby GT350-style MagneRide active suspension. As all Australian Mustangs currently have the Performance Pack features fitted as standard, it’s worth having a closer look at what else is in this offering.

There is also a Performance Pack 2 version, which will be available in the US later in 2018, which features more aggressive front and rear aero aids, plus wider wheels shod with the performance tyre of choice, Michelin Cup 2s. That package, which we have not yet driven, is claimed to be a couple of seconds faster per lap than the PP1-equipped cars. 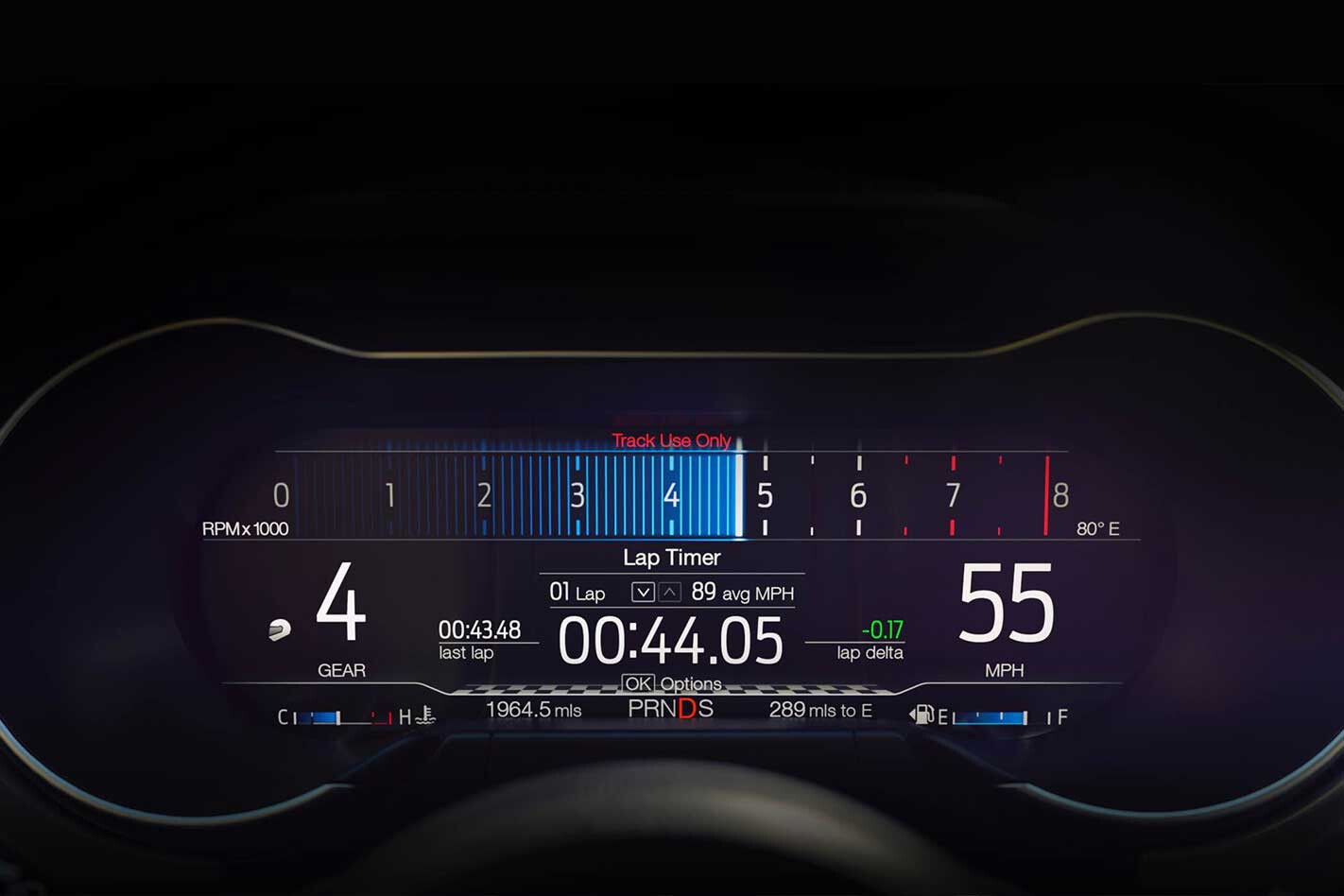 Showing that Ford hasn’t forgotten the Mustang’s street racing heritage, the ’Stang is fitted with a Drag Strip mode on cars fitted with the auto ’box and Performance Pack.

The software softens the rear active shocks to transfer the weight to the rear for max grip and keeps the engine at peak torque even while changing gears. The result is a 0-100km/h time of 4.1sec – although it’s unclear if the mode will make it to Aus-spec cars.

The quality of the interior is subtly improved, but the basic architecture and quality is unchanged. New for 2018 models is a pile of anti-crash tech from adaptive cruise control to lane-departure warnings and automatic emergency braking. 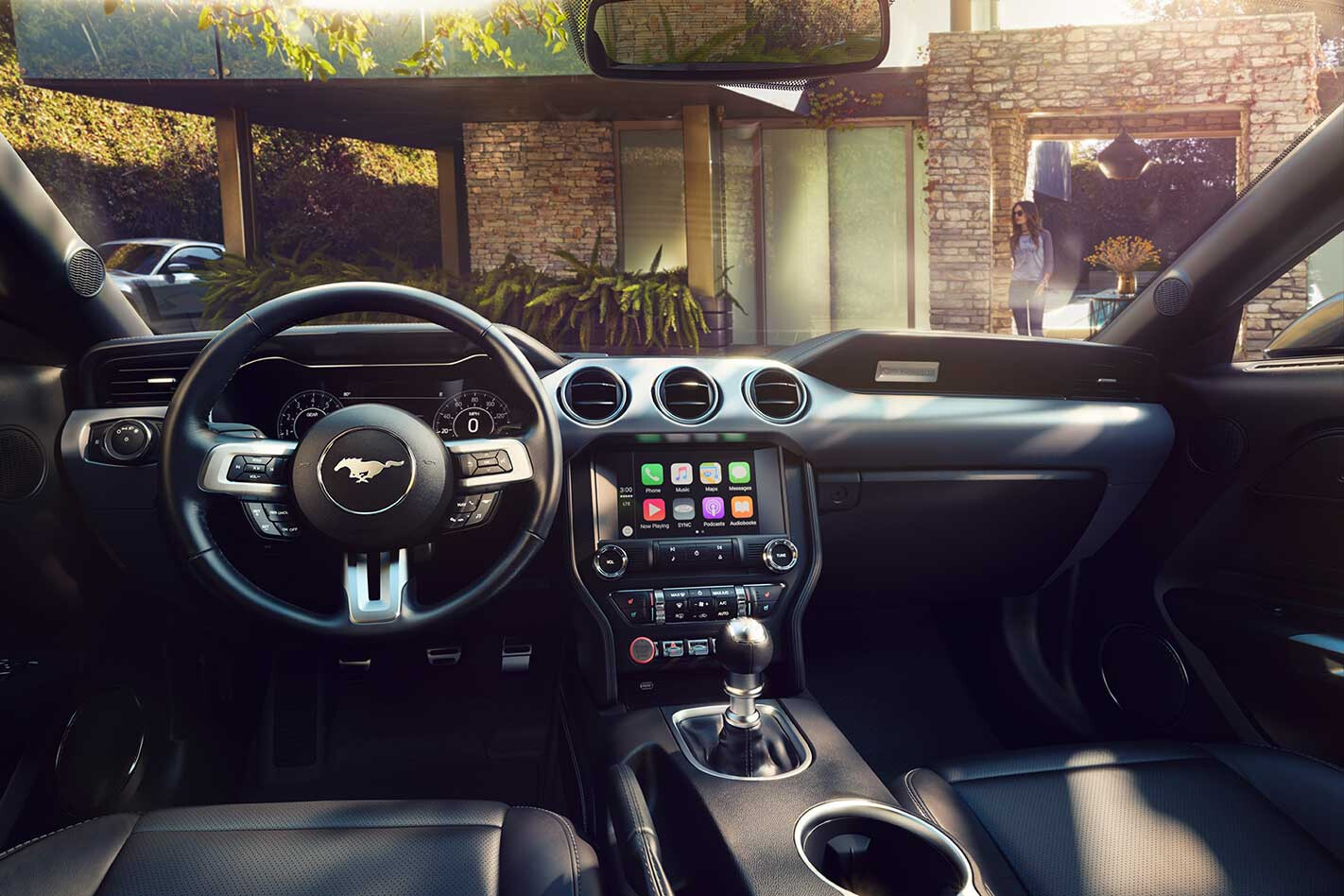 Starting the V8 with the new active valve control exhaust open, it just doesn’t sound legal. As fun as this is, Ford has fitted a timer system, so you can set it to stay shut when leaving or arriving home, and then stay wide-open elsewhere. Clever.

Out on the road in an actively damped car, the first impressions are how composed the car feels and how much sharper it handles. Steering response is appreciably more direct. The manual gearbox is slicker and more positive in action, too.

Pushing on a bit on Malibu’s tight and broken canyon roads, there is more performance on tap, but higher up the rev range. Allied to the gears, which feel wider spaced, you often find yourself swapping between second and third hunting for the sweet spot. Not a problem if you like swapping gears, but not ideal unless you are flat-out. You don’t have this issue in the 10-speed auto, which is a huge improvement over the previous six-cog ’box. It doesn’t take instructions from the paddle shifters quite as crisply as you’d want – a small delay happening a couple of times. But just left in auto it works well, changing just about when you’d want it to.

At higher speeds and cornering loads, the handling remains nicely neutral. Understeer is its natural tendency but, in true muscle-car fashion, you can remedy that swiftly and surprisingly precisely with your right foot. But as per the engine output, all this is now happening at appreciably higher speeds. Which is why, on many tighter roads like the ones we drove on, the EcoBoost-equipped car, with its skinnier tyres, lighter front end and better weight balance, was the more fun car to throw around. Bung in the auto ’box to keep the engine fizzing and it was the one we all got out of with the biggest grin.

Like 80 per cent of Australians, go for the V8, though. Because when you’ve waited this long to get your hands on a Mustang, only the noise, fury and interaction of a manual V8 will do. But you can understand why the remaining 20 per centers went for the EcoBoost. Final specs/prices of ’18 Mustangs heading to Australia – they will arrive in the second half of this year – have yet to be confirmed. But given they arrive with the Performance Pack as standard plus a handful of useful options, it looks like the cars will be equipped to do battle when they land. A pity that there aren’t RHD Camaros until 2020 (although there will be converted Camaros from HSV by mid-year).

This revised ’Stang will keep you going until then – if Ford can keep up with demand.