ALL new (mostly) for 2018, the new-look Kia Cerato sedan prepares the ground for the arrival of the hatchback later this year, and offers significant boosts to design, space, equipment and on-road manners – though there are fewer advances under the bonnet.

Kia’s unassuming Cerato is the fly-under-the-radar high achiever of the company’s local range, consistently providing a full third of the company’s sales volume in both sedan and hatch form. An all-new, third-generation Cerato sedan is now here, and though a more broadly-appealing hatchback bodystyle won’t join it until later this year (or early next), Kia’s latest C-segment four-door should give the company a solid push forward in the small car market. 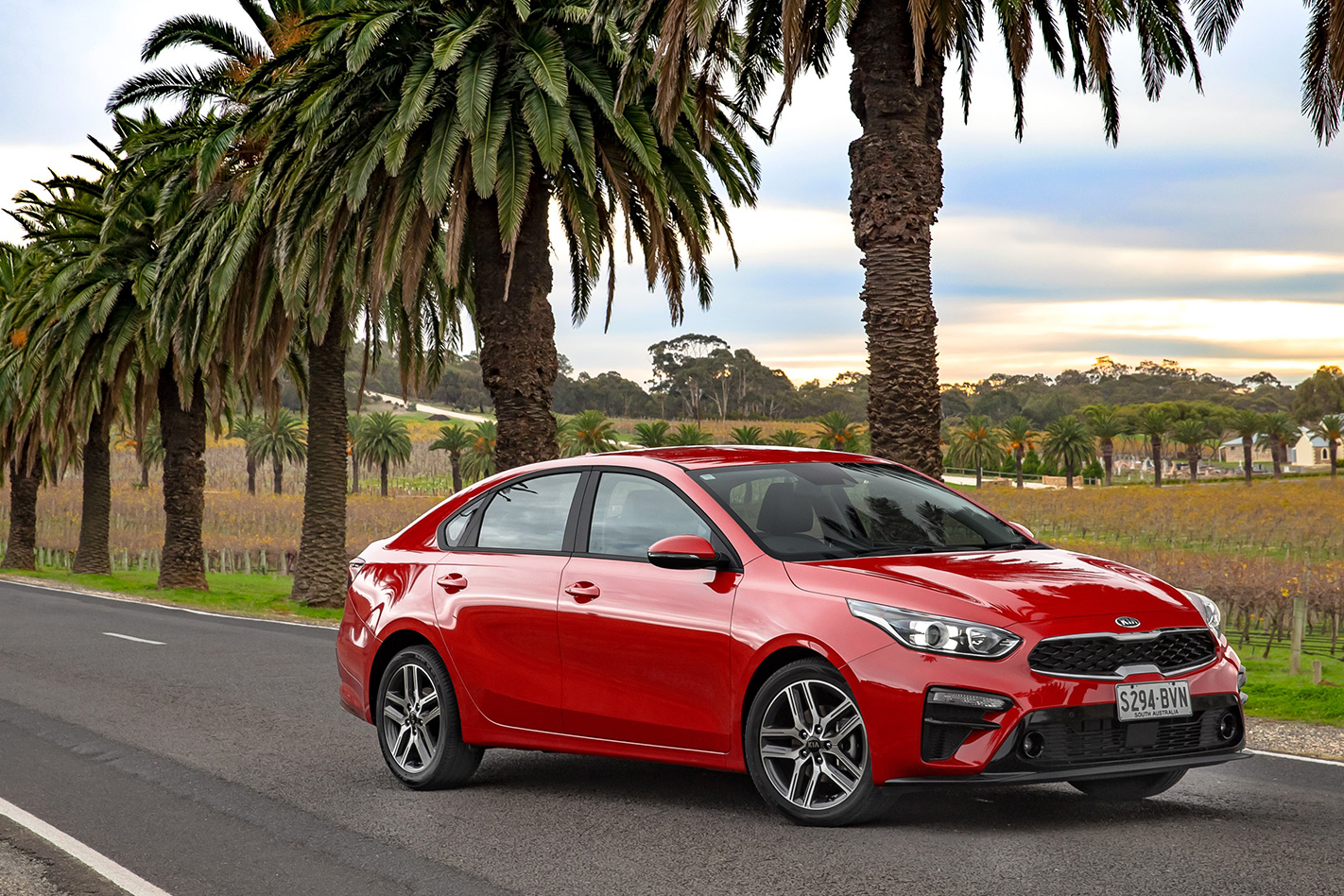 As an all-new replacement for a mainstay of the Kia lineup, the new Cerato sedan needs to impress. Although SUVs continue to chip away at passenger car market share, the small car market is still a crucial battleground in Australia and one that’s populated by a huge array of contenders. Not counting premium marques, there’s a total of 24 different small cars all vying for the attention – and wallets – of Australian new car buyers. Success here isn’t just determined by having the right price tag, the product itself has to be good enough as well.

The new breed of Cerato has the right interior, the right feature set and, perhaps most importantly, the right price, however it’s hard to overlook its increased thirst and mediocre carry-over engine. Will punters care more about the latter than the former, however? It seems unlikely. 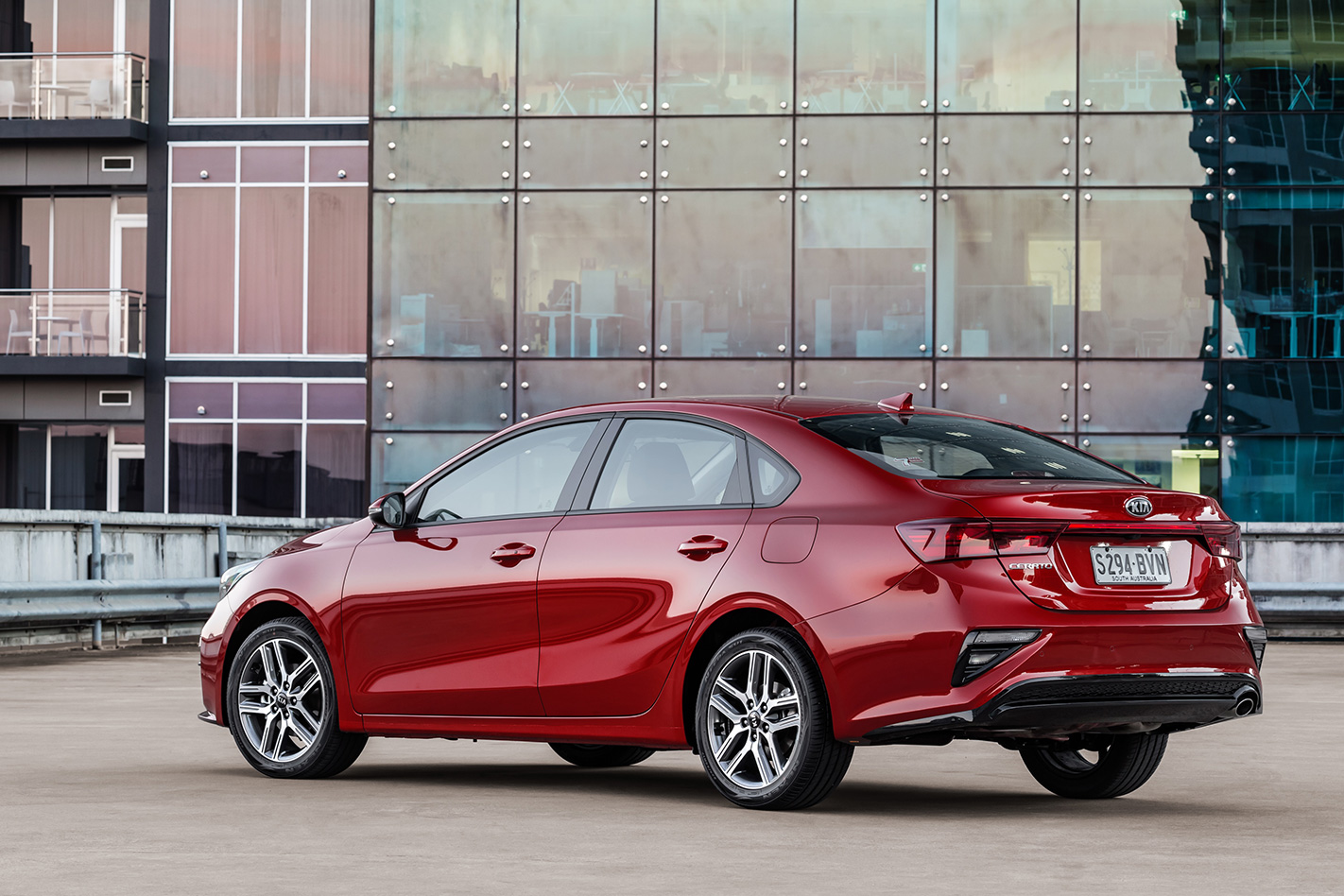 CONSIDER this: the Kia Cerato, as ordinary and unassuming as it is, is responsible for a solid third of Kia Australia’s sales volume. And those numbers are for the second-generation model, a vehicle right at the end of its lifespan – and one that’s remarkably average in most measurable criteria.

Furthermore, the demure Cerato is also a stout performer in the new car sales race – currently sitting in fifth place in one of the most competitive segments in Australia. Pricing has a big part to play, of course, and for the new-gen sedan Kia has retained an ultra-compelling $19,990 retail sticker for the entry-level Cerato S manual.

However, with a mere 5 percent sales split it’s not the Cerato variant that most punters will go for – rather, it’s the mid-strength Cerato Sport automatic, with an anticipated 40 percent split, that will be doing much of the heavy lifting in Kia showrooms. The top-shelf Sport+, meanwhile, is the value-rich flagship that loads up on gear for a modest $2500 premium over the Sport 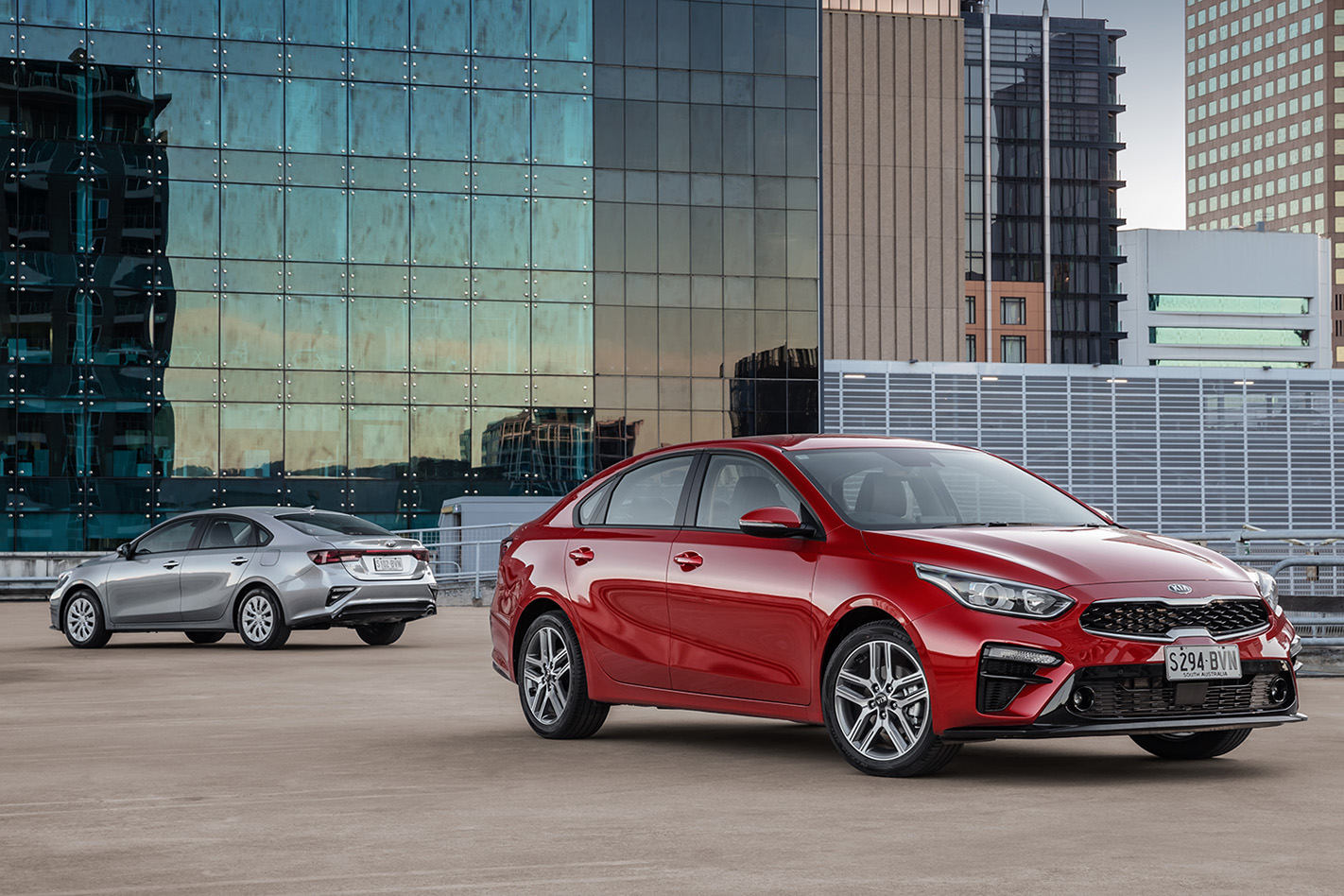 However, no matter which grade you select, you’ll find a small sedan that departs significantly from its predecessor in many ways – bar one crucial aspect.

Styled to mimic the broad-shouldered and confident stance of the Stinger, the new Cerato sedan sits astride the same 2700mm wheelbase, but is fractionally bigger in height, length and width. The front and rear overhangs have grown with the rear stretching by 60mm, a change which boosts boot space by 20 litres to a large-car-rivalling 502 litres, with the rear seats-up.

The new Cerato’s dash also lifts the cabin ambience markedly. More upright and putting a large tombstone-style infotainment screen front and centre, the blobby aesthetic of the old Cerato’s dash has been banished in favour of a more visually satisfying design. 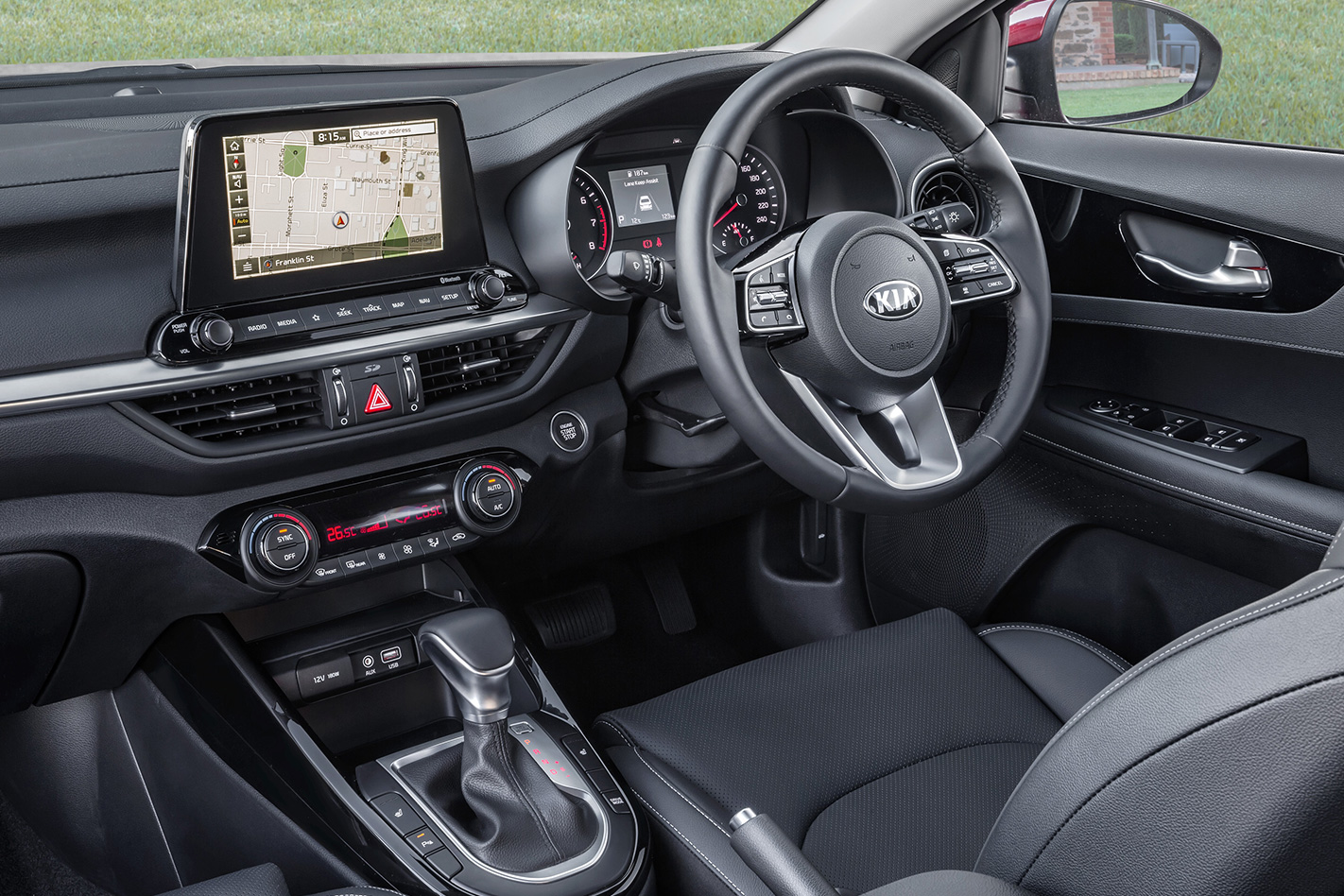 Hard seatbacks shells, so long a staple of C-segment Korean cars, also give the rear seat space a bit of a taxi vibe however – as do the rock-hard door card uppers and lack of rear air vents on all but the range-topping Sport+ grade.

That said, the rear seat is spacious with generous leg and foot room, plus a rear window that’s low enough for kids to see out of due to Kia’s conscious move to avoid an upswept beltline. Headroom is also decent, and a fold-down centre armrest houses two cupholders. 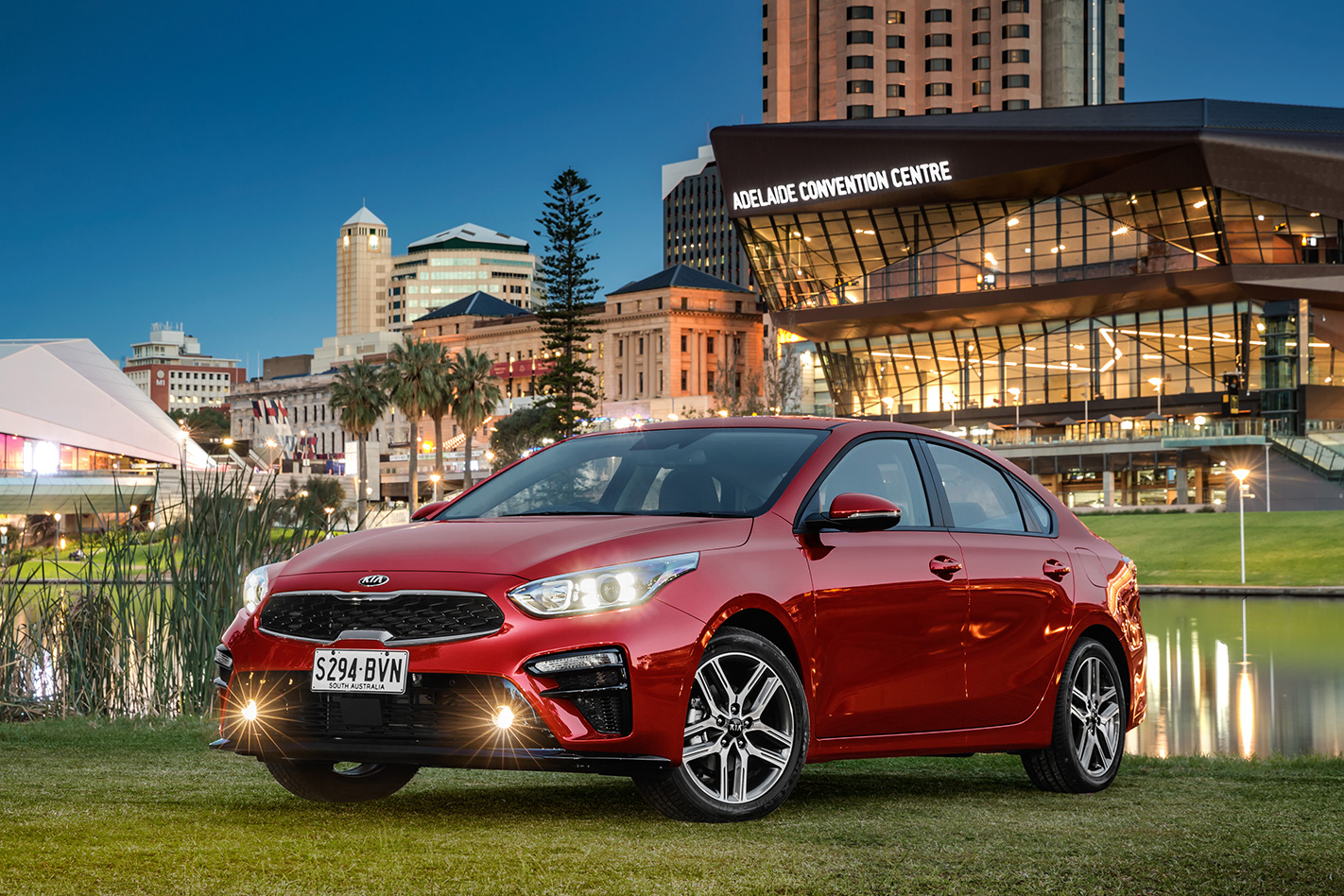 Up front, a digital radio tuner is standard on all models, and, from the mid-grade Sport and up, there’s integrated sat-nav via that clear and intuitive 8.0-inch touchscreen, which boasts smartphone-like responsiveness to inputs that’s not often found at this end of the market. Android Auto and Apple CarPlay are also standard-issue, should you prefer an internet-enhanced experience.

All Cerato sedans are fitted with AEB now, but the Sport+ grade goes a step further with a more intelligent system that can detect pedestrians and cyclists, rather than just other cars. It’s optional on the base S and mid-spec Sport, but at a cost of $1000, and putting it on the options list for those grades seems like a missed opportunity for Kia to take a position of leadership on safety. 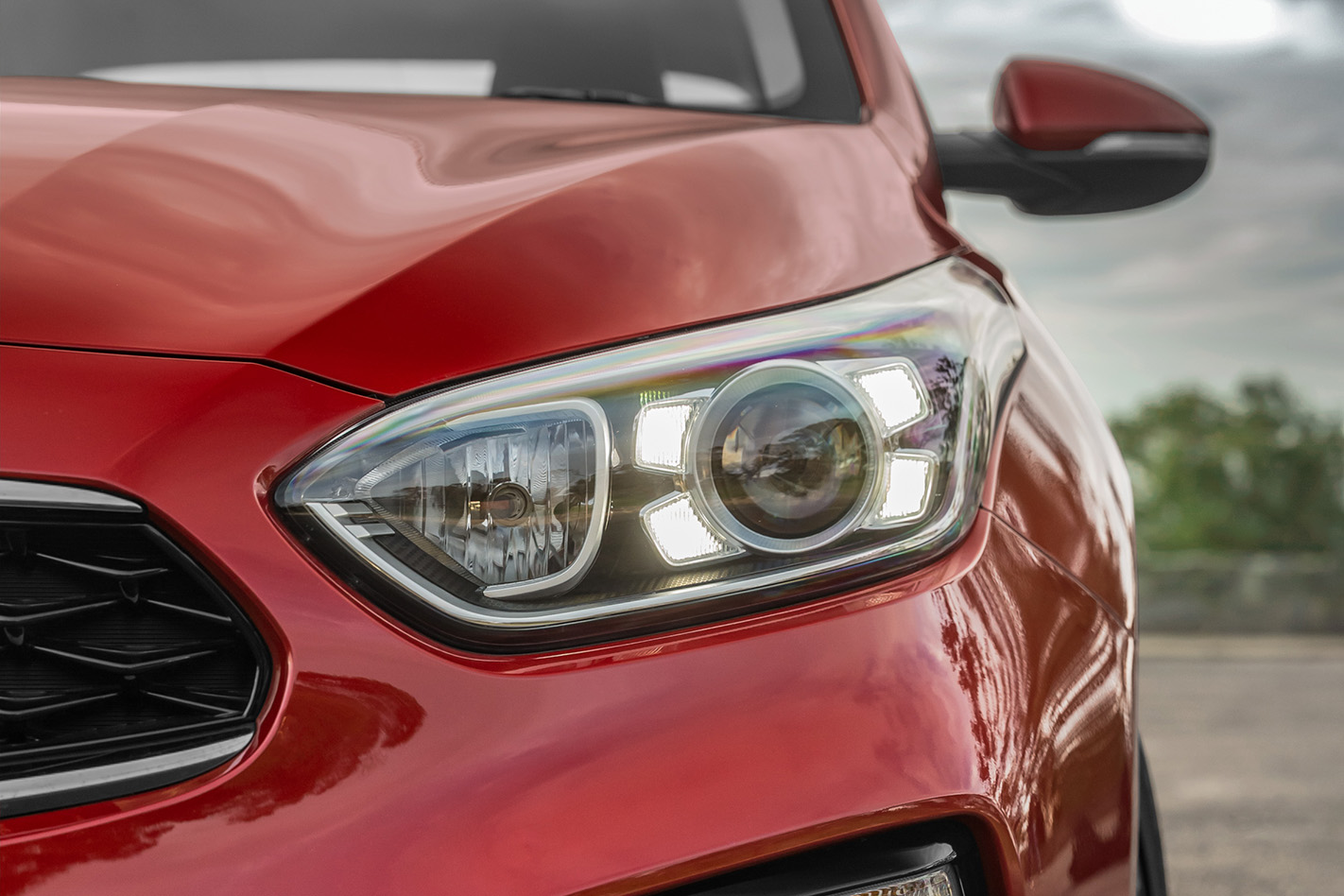 Another missed opportunity can be found – or rather not found – in the engine bay. Lifting the bonnet reveals a carry-over 2.0-litre petrol four-cylinder that makes 112kW and 192Nm – identical numbers to the outgoing car. However, thanks to a kerb weight that’s 19kg heftier than before and a bigger body, fuel economy worsens to 7.4L/100km. That’s a 0.2L/100km penalty relative to the car it replaces, making the Cerato sedan’s powertrain story not just a case of “nothing to see here”, but one that actually hurts buyers in the hip pocket over time.

It’s clear that Kia has tried to compensate by making the multi-mode driveline electronics preference high gears if left in self-adjusting ‘Smart’ or ‘Eco’ settings, but the end result is a car that feels dozy and sluggish until you really sink the right pedal. In Sport mode it actually feels reasonably perky, but that penalises fuel efficiency even further. 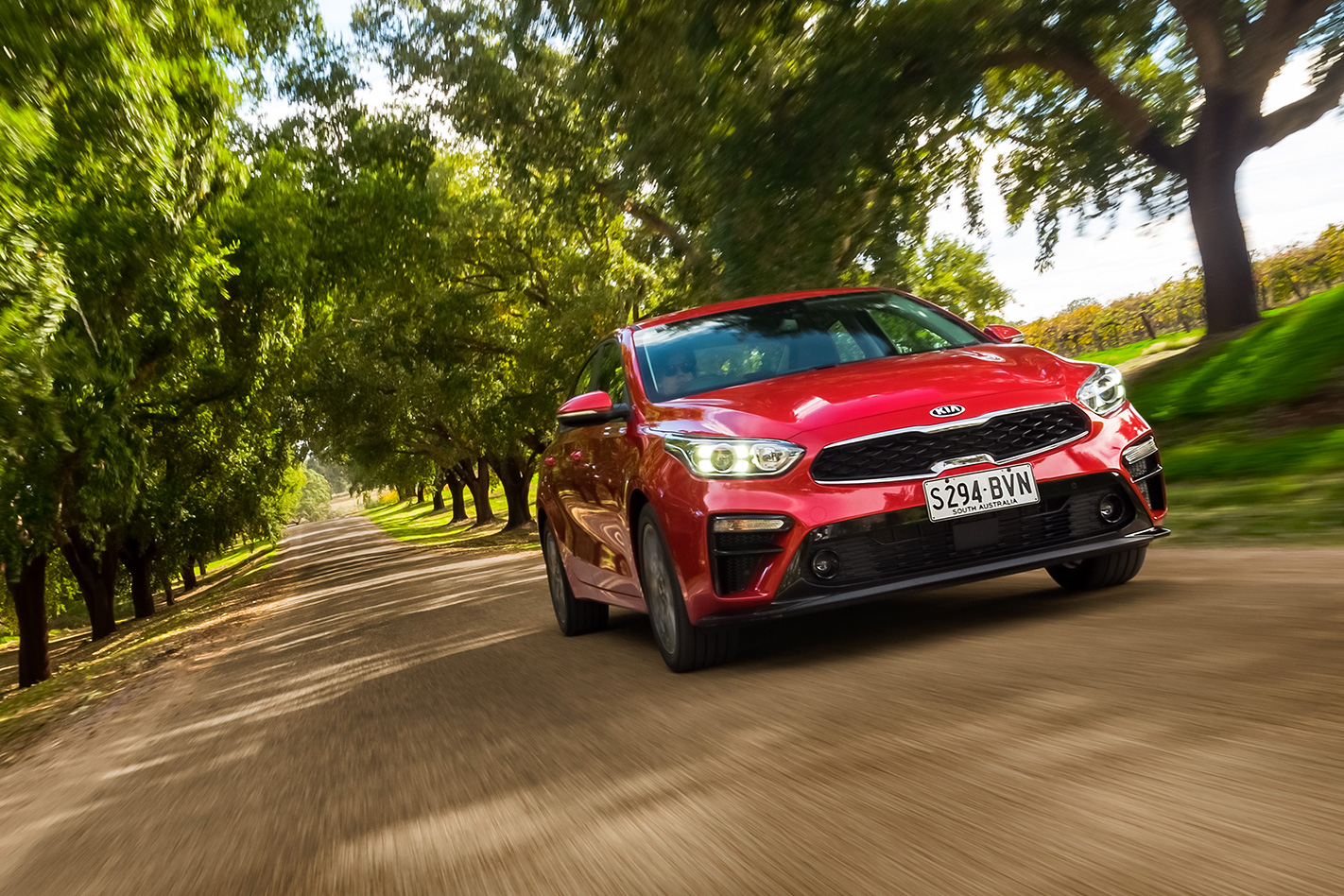 Fortunately, the driving experience is a solid one. A stiffer bodyshell combined with Kia Australia’s policy of honing the handling of all of its vehicles gifts the new Cerato sedan with direct steering (albeit devoid of feel or feedback) and a ride that feels stable and tied-down in most regular driving conditions. It grips fairly well, but its cornering performance is typical FWD Korean – safe, but unexciting.

Ride comfort is good too. Besides some thumping on rough-edged asphalt, the Cerato’s suspension is fairly well contained, though can border on floaty when the speed gets up and big compressions are encountered.

There are some great leaps forward with the new Cerato sedan, and arguably they’re the ones that are most important to the average small car buyer – cabin comfort, features and design.

It’s just a shame that the big improvements contained within its well-kitted interior haven’t been matched on the other side of the firewall. 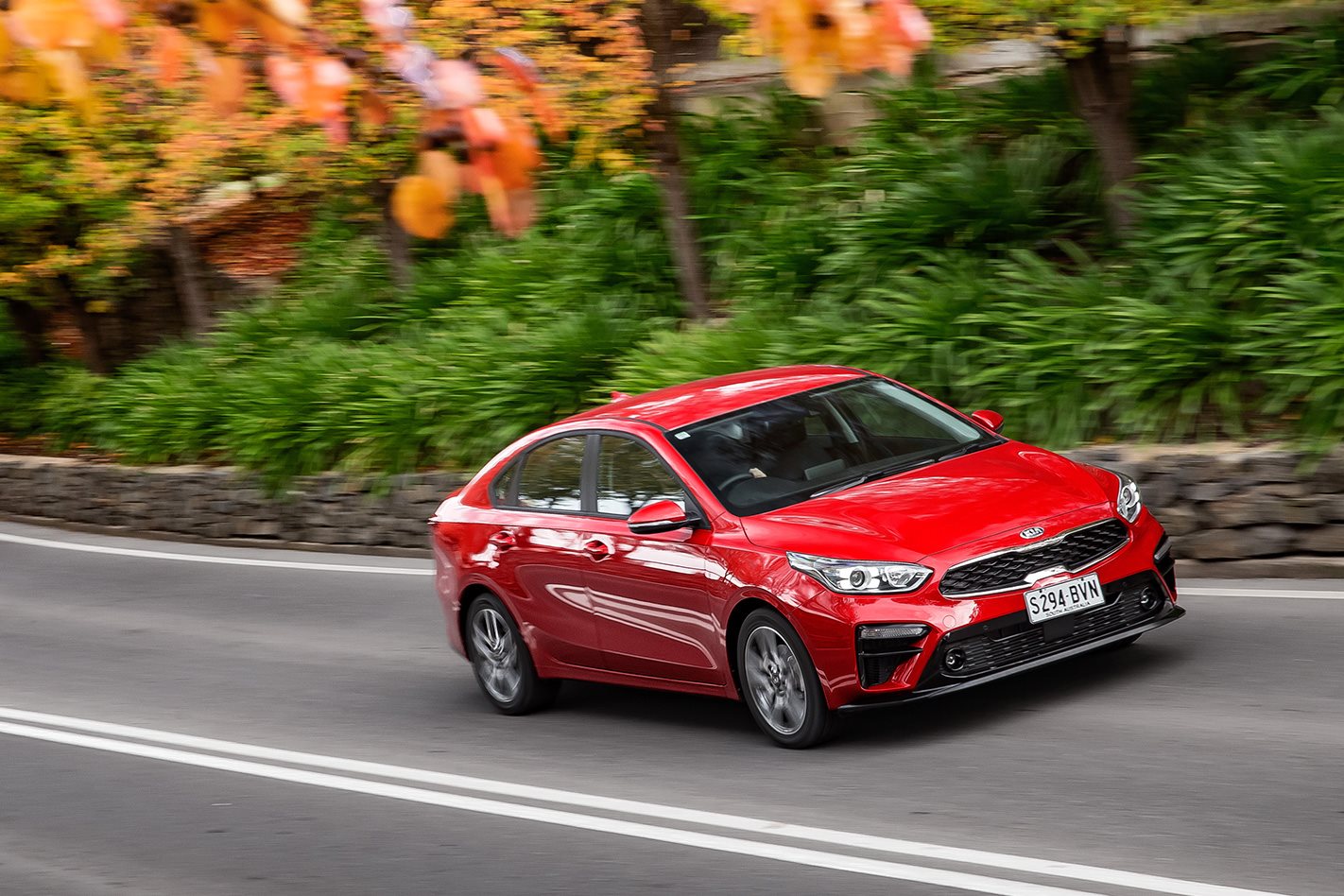 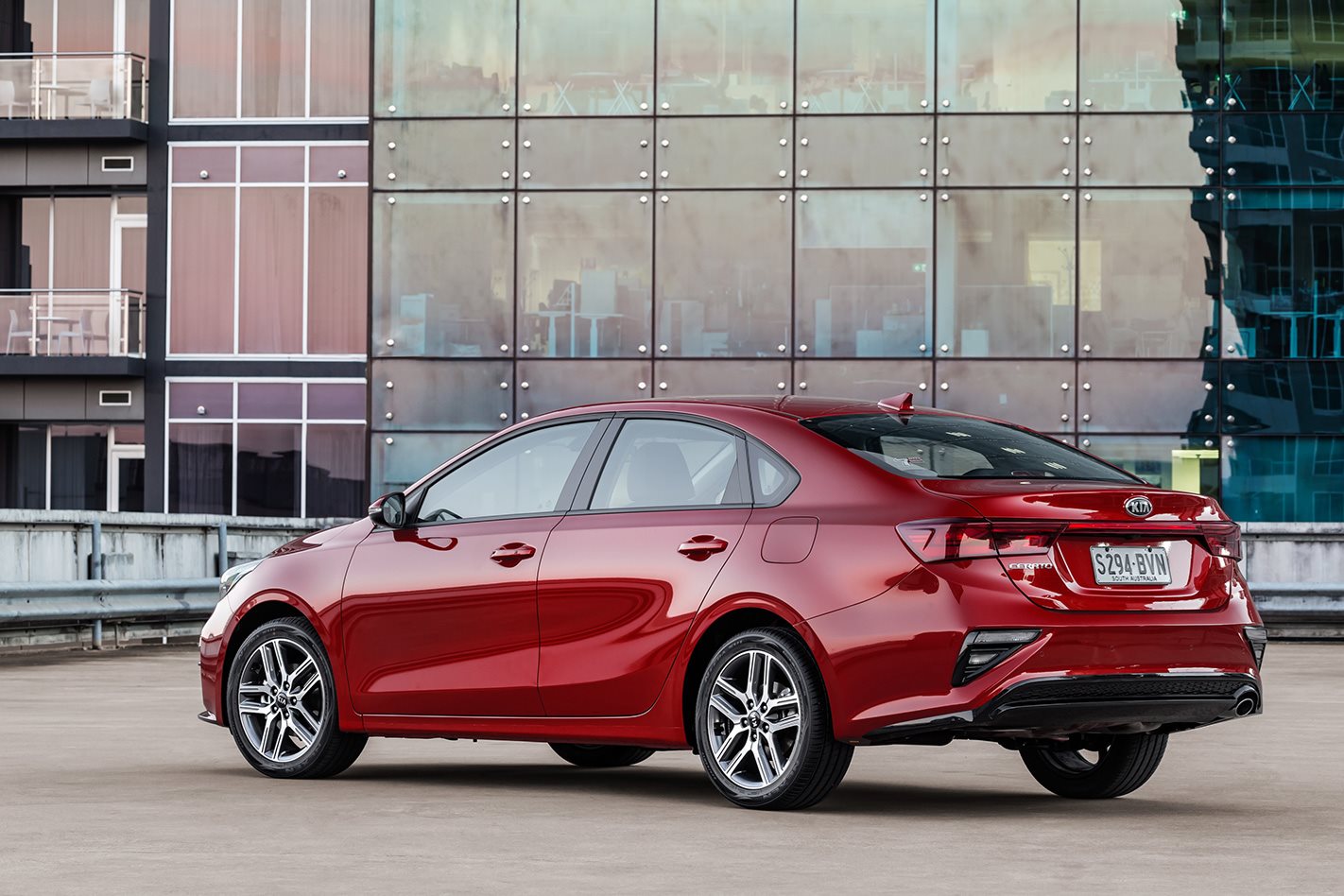 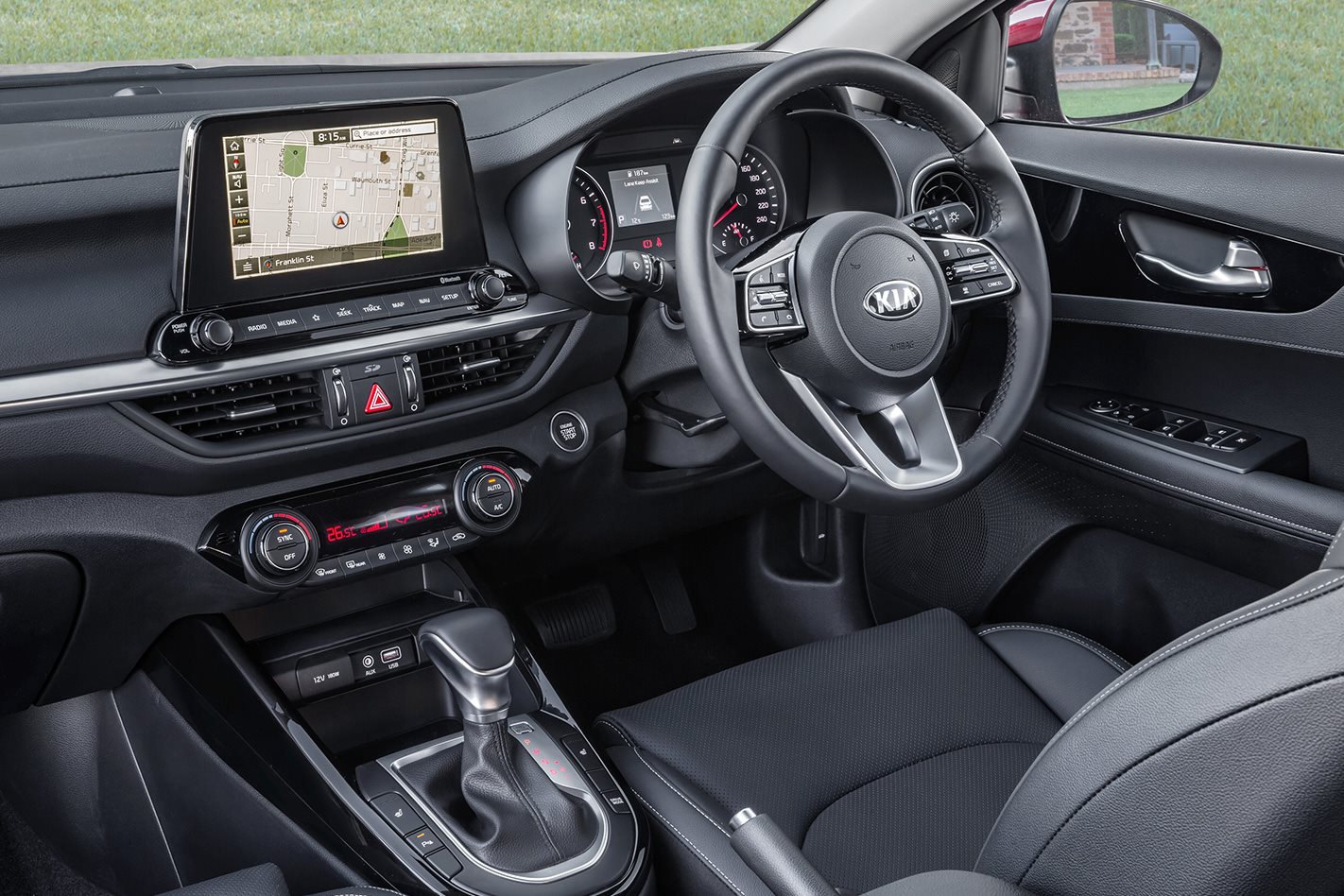 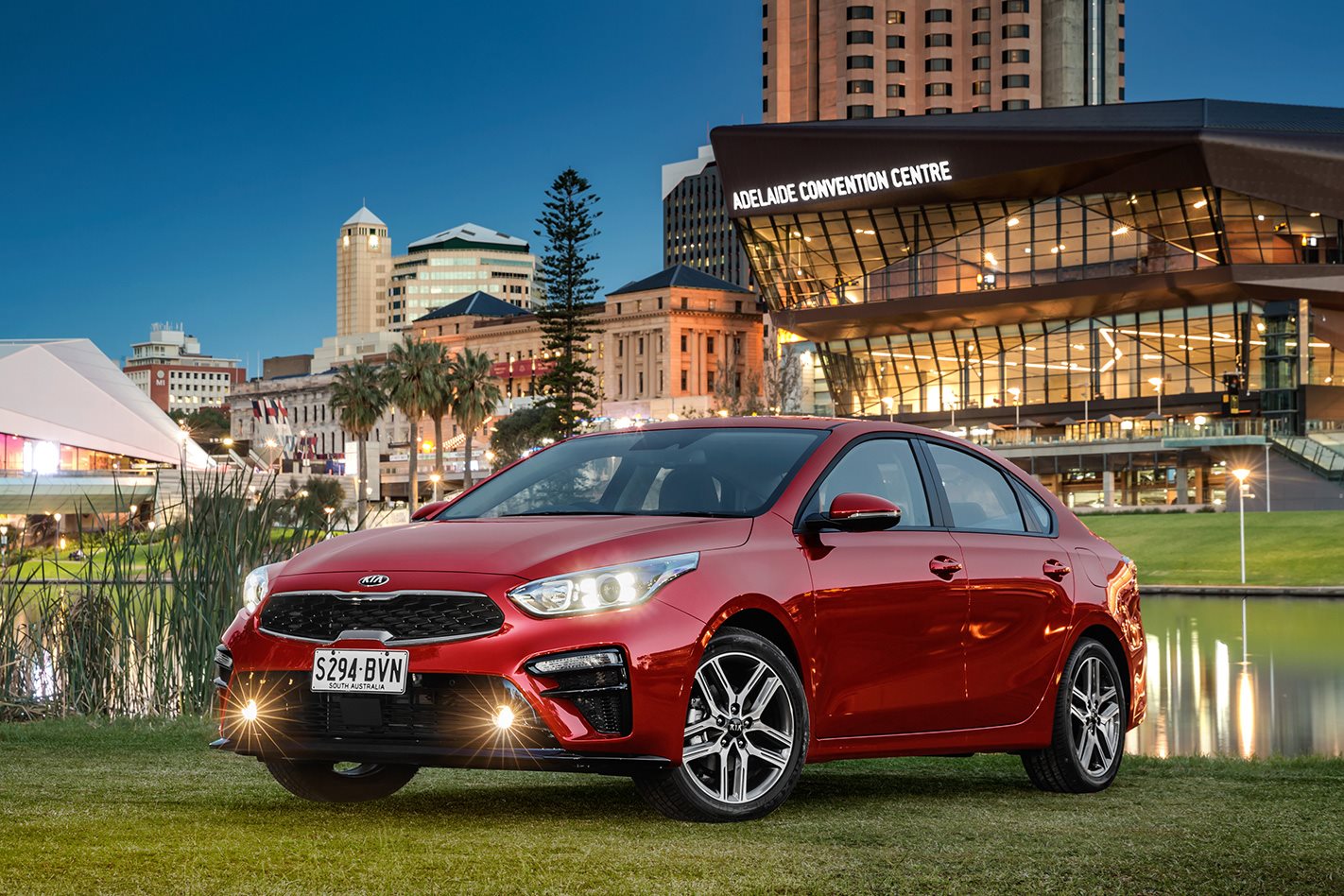 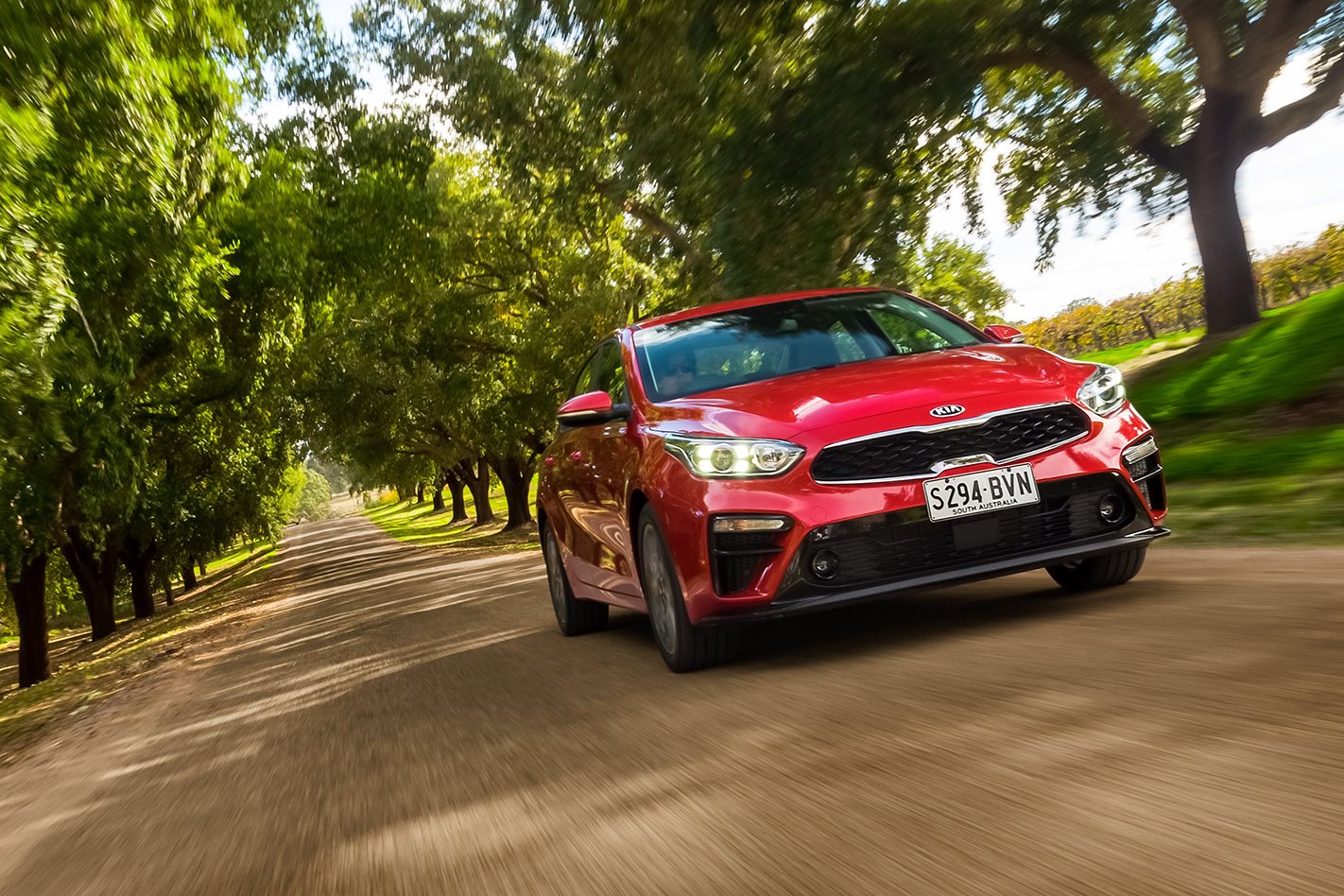 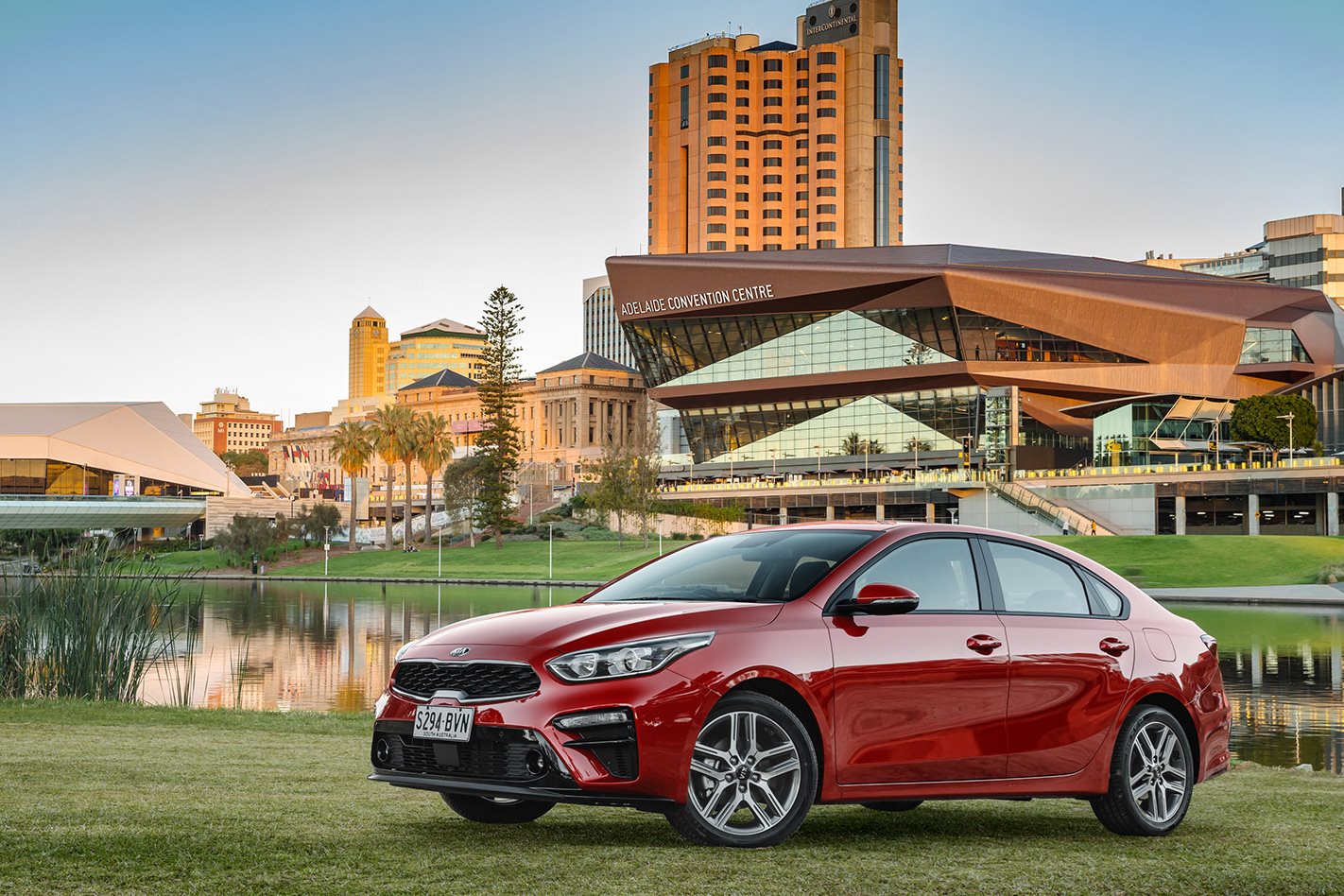 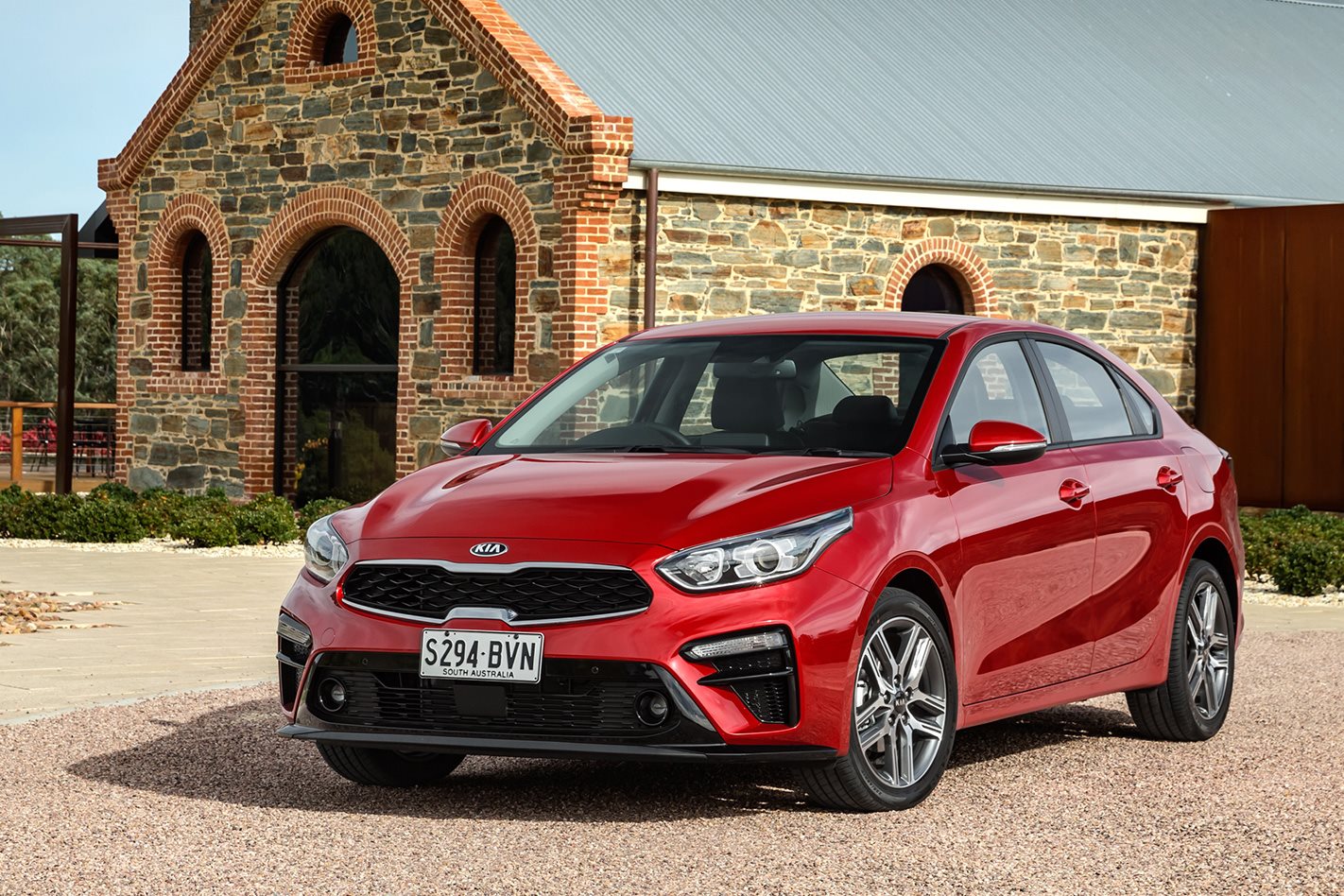 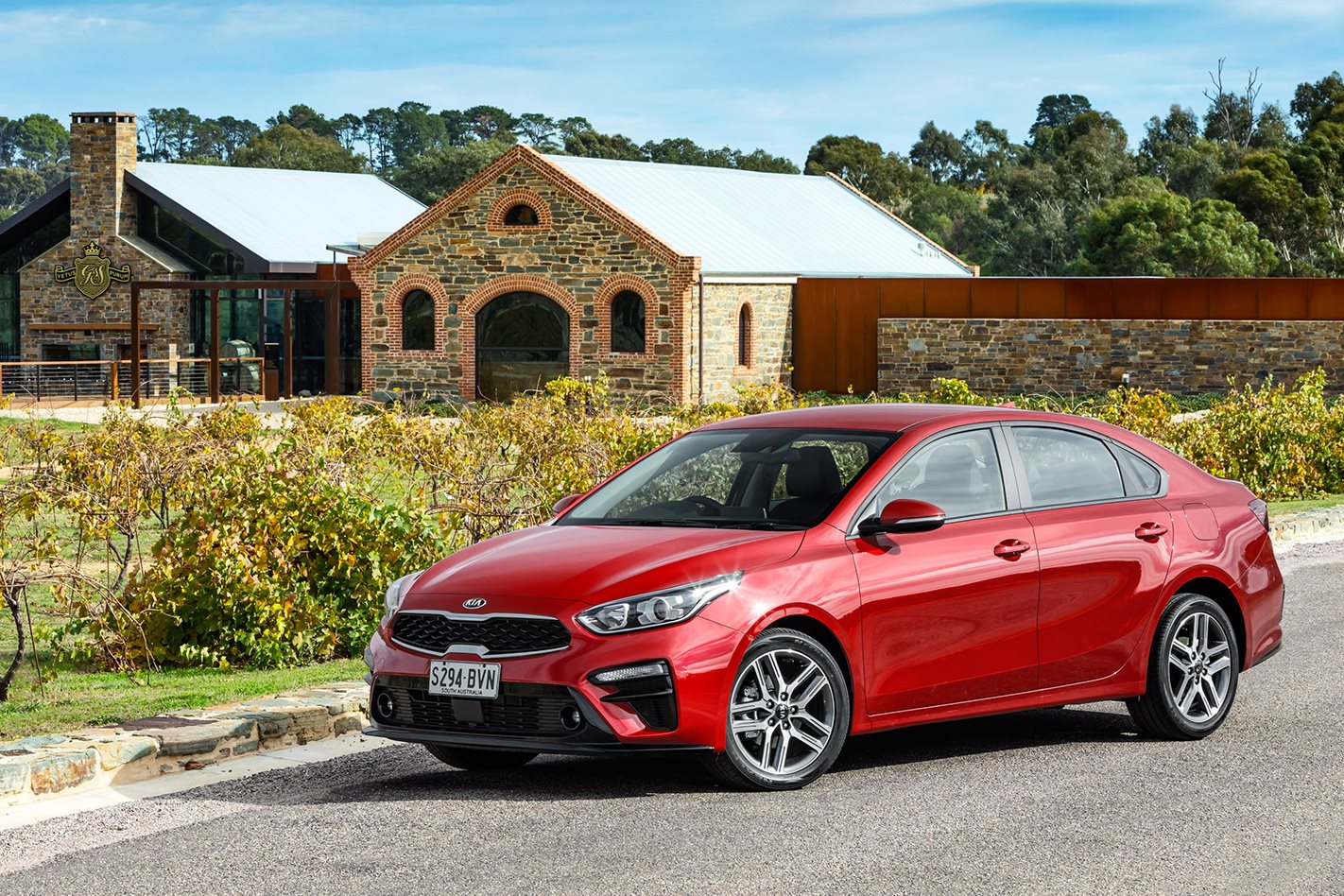 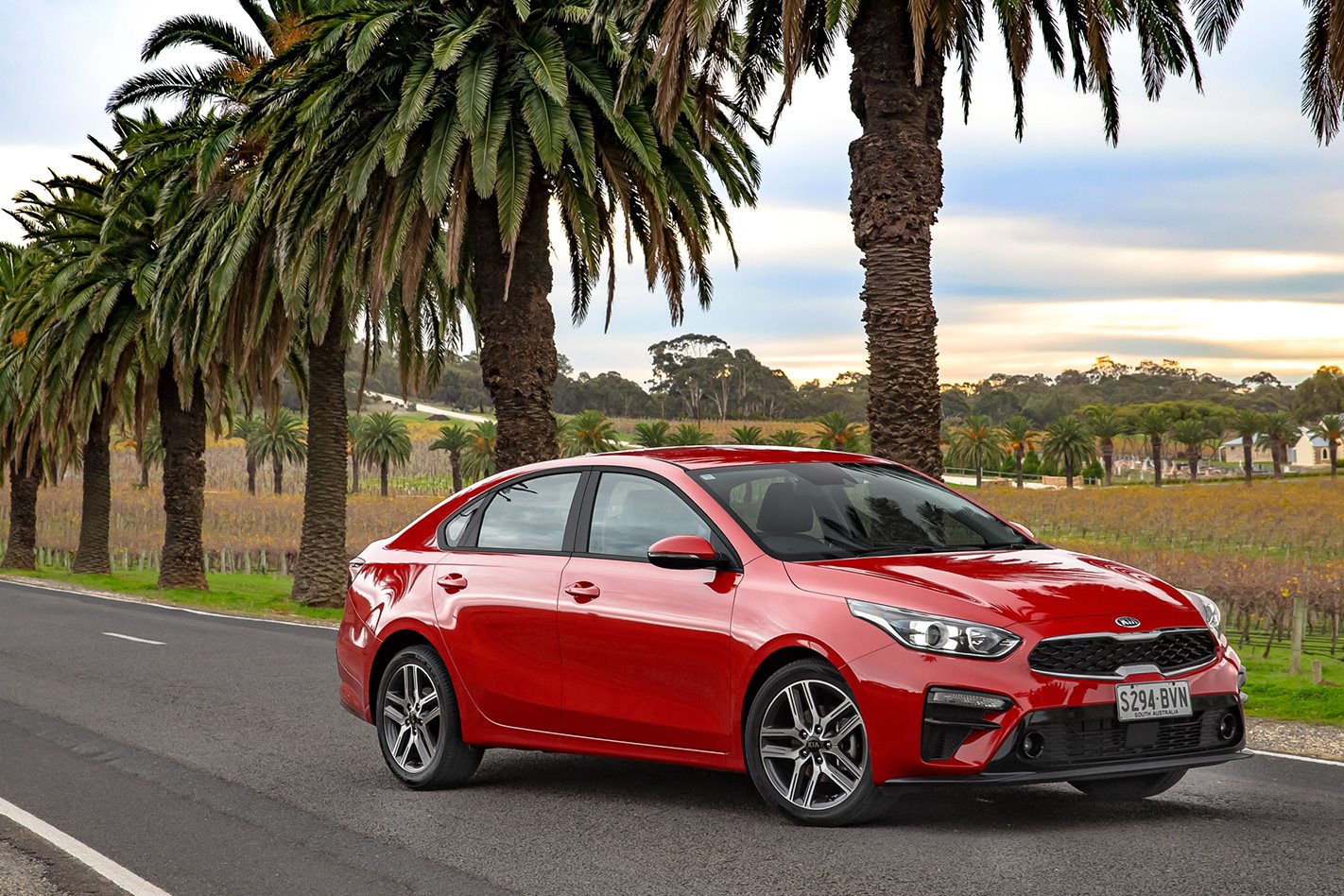