RANGE Rover has joined the plug-in hybrid set with a four-cylinder version of the Vogue luxury off-roader.

This new PHEV drivetrain headlines a range of MY 18 changes for the "Rangie" that are intended to keep the big Pommie off-roader "Above it All"… or at least ahead of its prestige rivals. This new Range Rover model treads far more lightly with a parsimonious thirst, courtesy of a cleverly integrated and well executed petrol-electric drivetrain that delivers performance second only to the top-shelf supercharged V8. 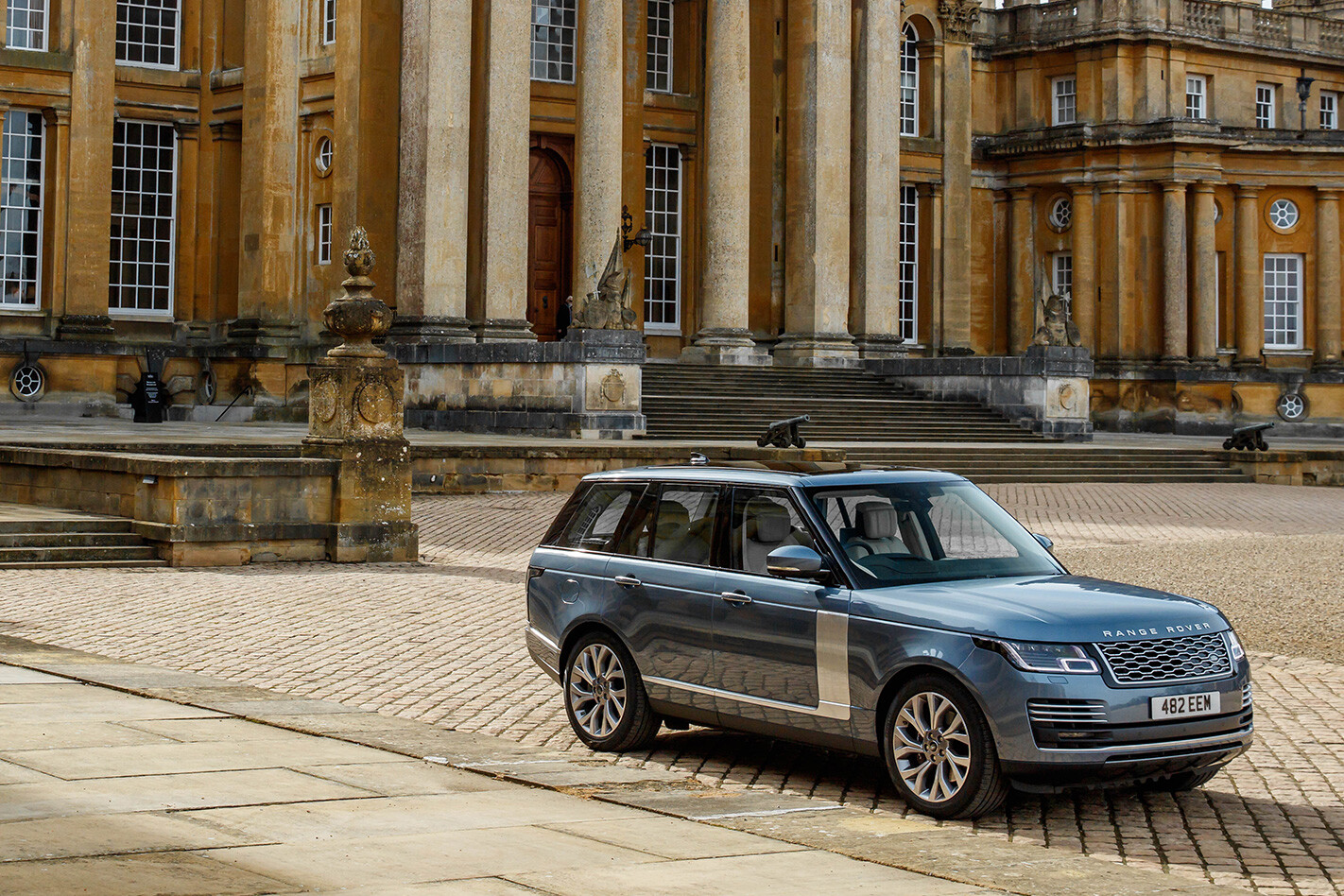 Despite ever more competitors gunning for its mantle, the Range Rover remains unique among off-roaders thanks to its combination of luxury, performance, off-road ability, and cachet. The impressive efficiency of its new plug-in hybrid powertrain neatly sidesteps the criticisms often levelled at big 4x4s — that they’re planet-wrecking gas guzzlers — while giving up none of the comfort, performance, off-road capability or luxury that the Rangie is renowned for. 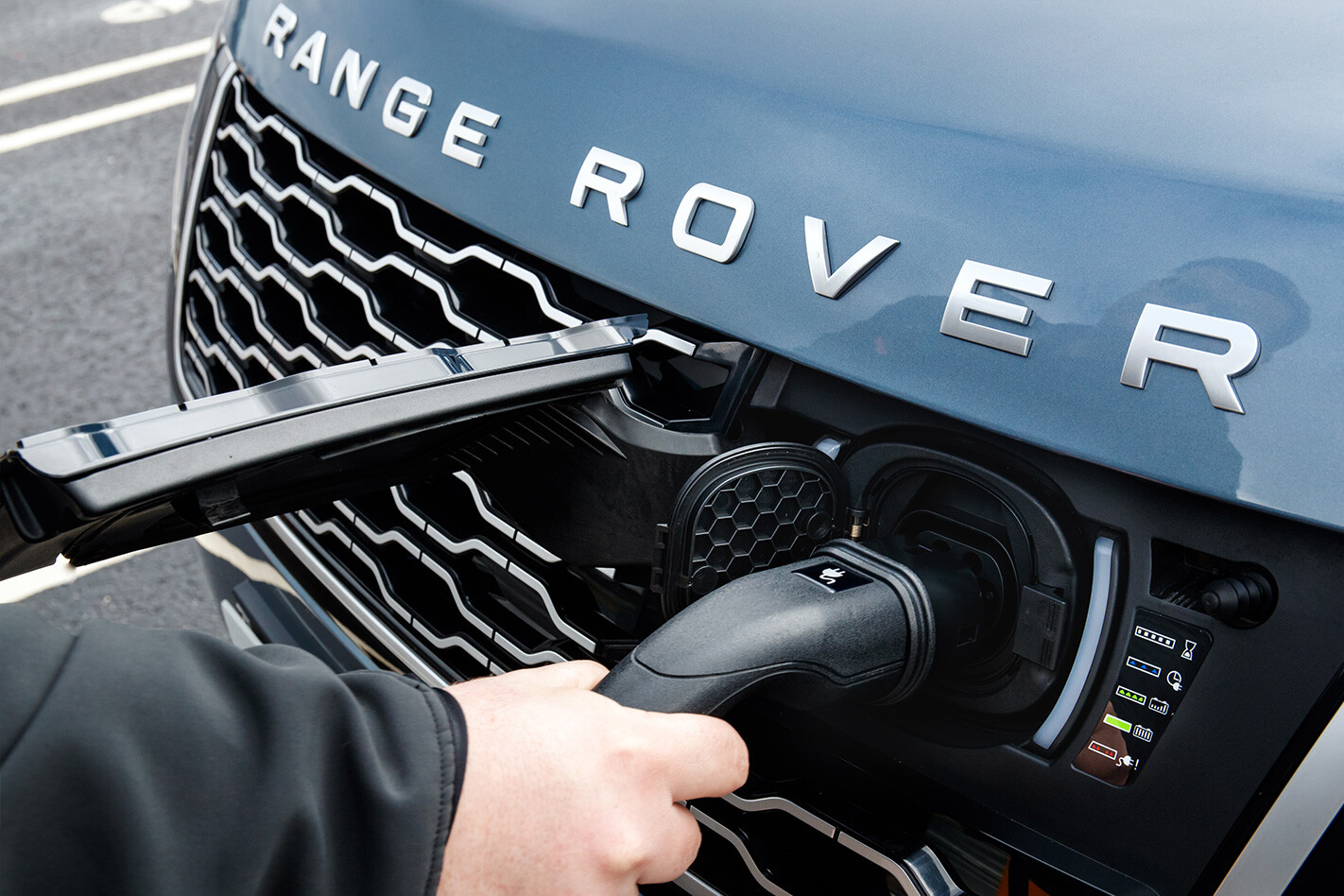 DESPITE their unbridled popularity with the masses, 4x4s and SUVs have been copping it in the neck from Greenies for years.

Variously critiqued as being too big, too heavy, too thirsty, or just too stupid, these ‘lumbering behemoths’ have been an easy whipping boy for anyone and everyone with an axe to grind about the fragility of our blue planet.

But while the new Range Rover PHEV is no less physically imposing than its established stablemates, the electrification of its drivetrain and associated cleaning up of its environmental act will surely leave critics clutching at straws when trying to find new reasons to damn the big Brit and its ilk. 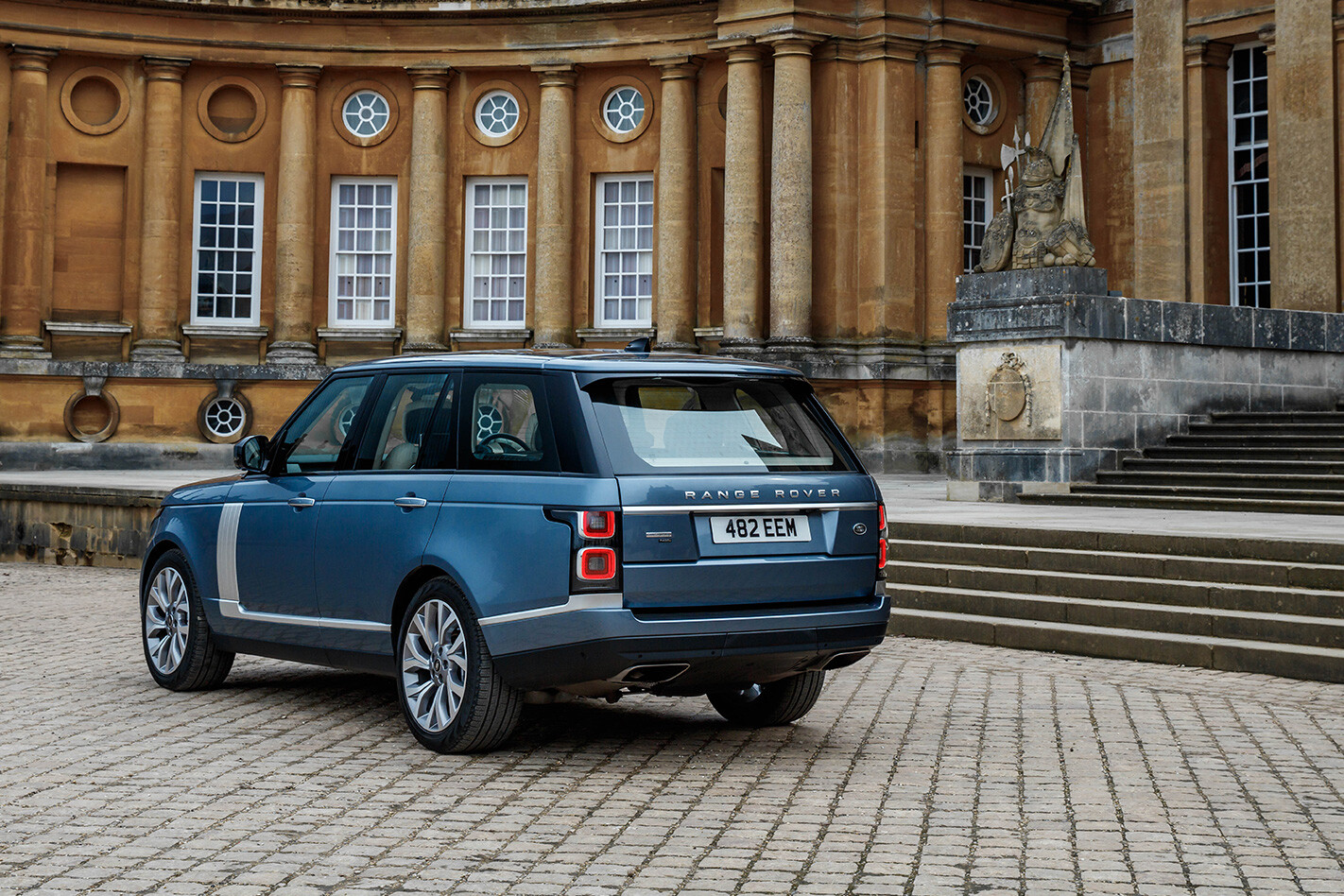 Drawing on the technology and lessons discovered through the recent electrification of its associated Jaguar passenger car range, en route to its goal of having all new models electrified from 2020, Jaguar Land Rover has transplanted the idea of an efficient plug-in hybrid electric system into its most luxurious offroader with impressive results.

With peak outputs of 297kW and 640Nm seamlessly channelled through its updated eight-speed ZF automatic and permanent all-wheel-drive system, the 2.5-tonne PHEV Rangie can sprint to 100km/h in just 6.8 seconds — performance bettered only by its more expensive 5.0-litre supercharged V8 siblings — yet still delivers combined-cycle fuel economy of just 2.8L/100km, and an enviable C02 rating of 64g/km.

What’s more, the plug-in hybrid system means the Rangie PHEV has an electric-only range of 51km, which Land Rover says will allow drivers to complete most journeys without even engaging the petrol engine. Take that, Bob Brown! Citing a 2016 British Department of Transport report that found 56 per cent of car trips in the UK were under eight kilometres, Land Rover claims the car’s respectable EV-only range will allow many drivers to regularly enjoy zero-emissions journeys.

On a half-day UK test drive that included a wheel arch-depth river crossing, slippery low-range driving across boggy farm tracks, and B-road cruising through the narrow stone-walled farmlands and villages of the scenic Cotswolds, the Range Rover PHEV proved it had all the capability and versatility customers will expect from this luxury marque, and few evident drawbacks.

The complex drivetrain is integrated effectively so that the car simply feels smooth and responsive, with no particular evidence of the internal combustion engine and electric motor working together. In default mode the system operates as a parallel hybrid, combining the two drive systems effortlessly to deliver smooth and impressively brisk off-the-mark acceleration, and equally effortless overtaking performance at the posted limit and beyond.

As well as enabling electric-only driving, the PHEV system also allows the driver to save battery charge for use at a time of their choosing, ensuring that there is always pure EV power available for when you want it, such as when coming off a freeway run and entering a congested urban area. 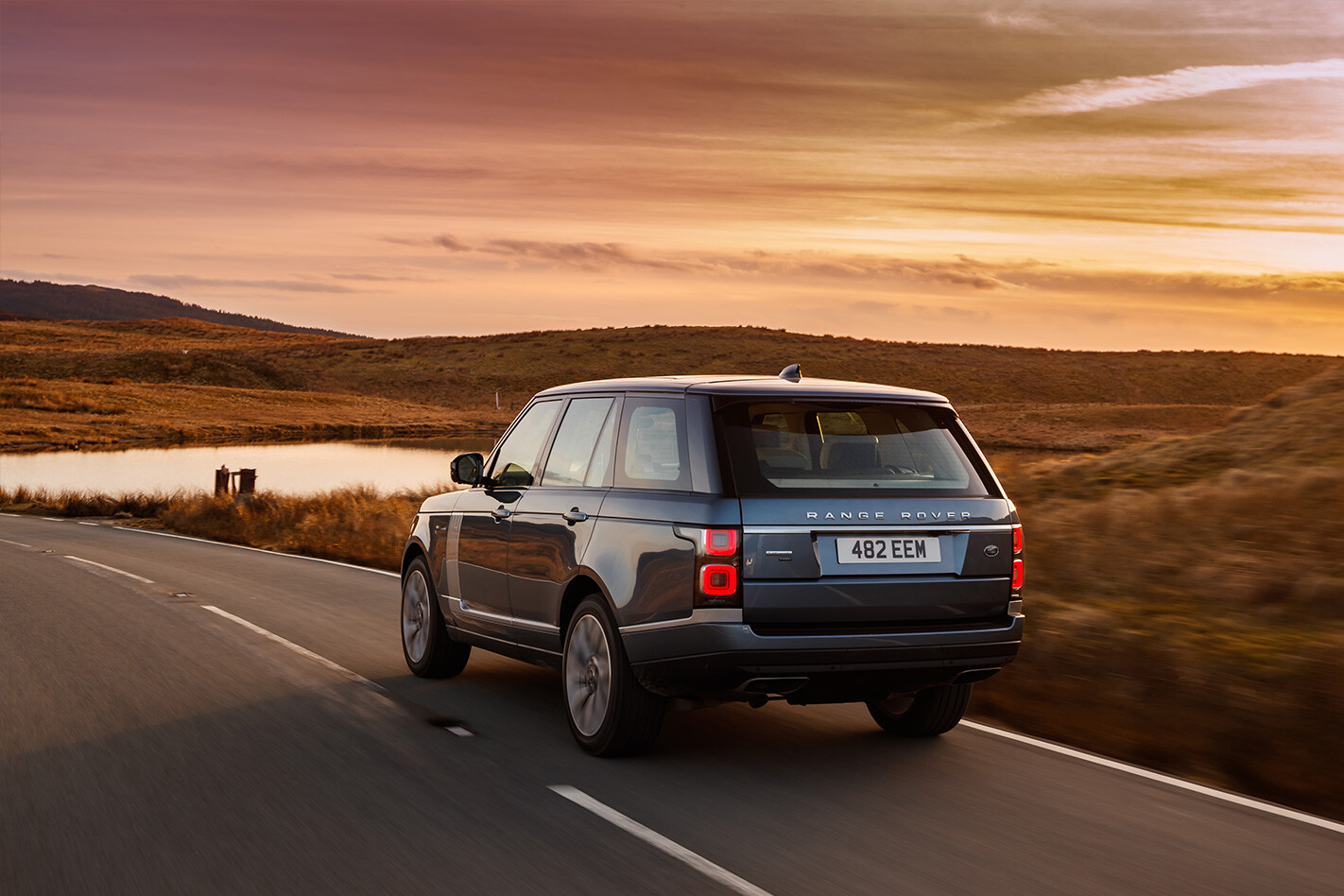 Charging time for the battery is 2 hours 45 minutes on a rapid charge system using a 32-amp wall box, or 7.5 hours if using a 10-amp home charger. The access point for the charging cable is behind a discreet flap on the grille, while the electric motor's battery is mounted beneath the boot floor where the spare would usually go.

In pure EV mode the throttle pedal feels less responsive than in parallel mode, requiring more pedal pressure for similarly rapid acceleration. Other than this, and the range of EV-related information displayed on the digital dash and centre screens, you wouldn’t know it was anything other than another smoothly responsive and rapid Range Rover. Badging has been kept unusually modest, with just a tiny, black P400e badge on the left-hand side of the tailgate.

The quietness of the PHEV drivetrain adds to the Range Rover’s already impressively high levels of refinement and comfort, the latter accentuated by its long-legged air-sprung suspension that delivers a superbly plush ride. This new Range Rover has lost none of the marque’s ability to waft its occupants along in unparalleled comfort and style.

It wouldn’t be a Range Rover if it couldn’t also handle the rough stuff, so Land Rover has ensured the PHEV can tackle everything its conventionally powered stablemates can, updating its "Terrain Response 2" four-wheel-drive system to distribute the instantaneous torque of the electric motor to all four wheels, and ensuring the car’s 900mm wading depths and other off-road markers are not compromised. 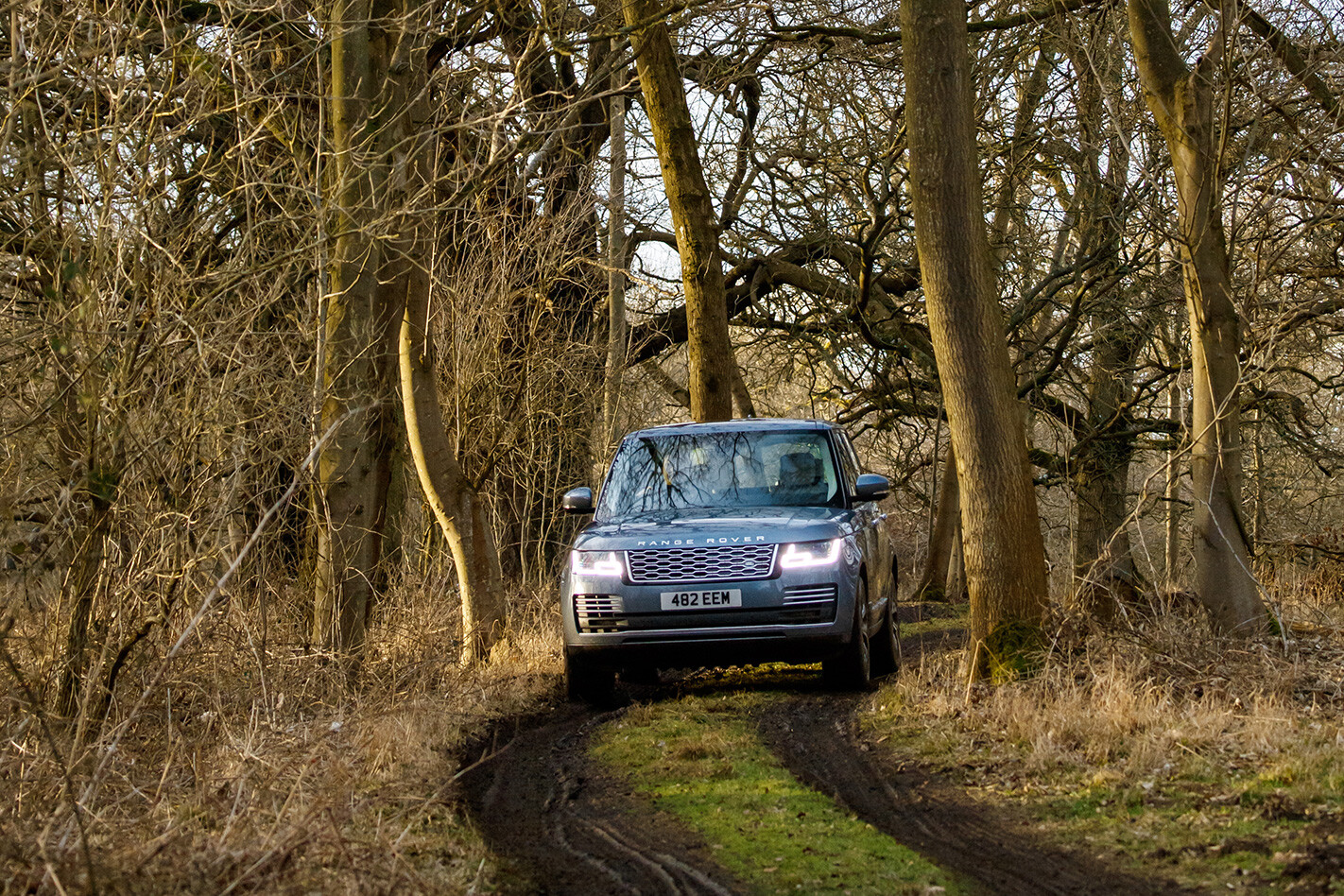 As with on-road, the car can be driven in EV-only mode off-road, although we mainly drove it in the default parallel-hybrid mode where we found that if the driver struggled to effectively modulate the car’s prodigious torque in deep mud, it’d easily prompt excessive wheel spin. That said, these were admittedly diabolically greasy conditions.

The PHEV never bogged, though, despite its obviously road-oriented tyres, easily tackling the muddy paddocks and fields that would have stopped plenty of lesser 4x4s. Despite its batteries and other sensitive electric running gear, it showed it also wasn’t scared of water, fording a river that brought a bow wave briefly to almost headlight height and crossing the 20m stretch with water lapping over its bumpers. Land Rover cautions drivers to not run the car in EV-only mode in such conditions, to prevent water running up the exhaust pipe.

Inside, the PHEV arrives with the same updated cabin that’s also been rolled out across the wider Range Rover lineup. Featuring a double-decker arrangement of 10-inch high-definition touchscreens on the centre stack, the new layout significantly declutters the dash layout and adds a futuristic and high-tech sheen, along with tablet-style ease of use. Achieving a basic level of competence with the various systems and screens is relatively easy, but it is a complex system that can control all manner of features, including the car’s sophisticated Terrain Response off-road settings, so will take some familiarisation before drivers are totally comfortable and not stumbling into various unsolicited menus. They’re also touchy, and it’s easy to select something you're not looking for, stabbing at the screen while bouncing down a rough track or road.

In Australia, the PHEV drivetrain will be available only on Range Rover’s entry level Vogue specification, where its $210,000 recommended retail price will make it one of the more affordable options in a lineup that ranges from the entry-level TDV6 at $190,000, to the stratospherically priced V8 Supercharged SV Autobiography Dynamic at $341,400.

The latter might have a beastly 416kW supercharged V8 under its bonnet and a soundtrack that its four-pot hybrid sibling could never match, but right now the PHEV is one of the most intriguing powertrains on offer in Range Rover’s top-tier SUV family. The performance stats are respectable, there’s still more than a modicum of off-road nous and, if juiced up on renewable power, it offers a guilt-free SUV experience. It’s a Range Rover that even a Greenie could love.