The Hennessey Heritage Edition Ford Mustang isn’t solely about numbers, although it has plenty of big figures if you want them. Let’s begin with power. 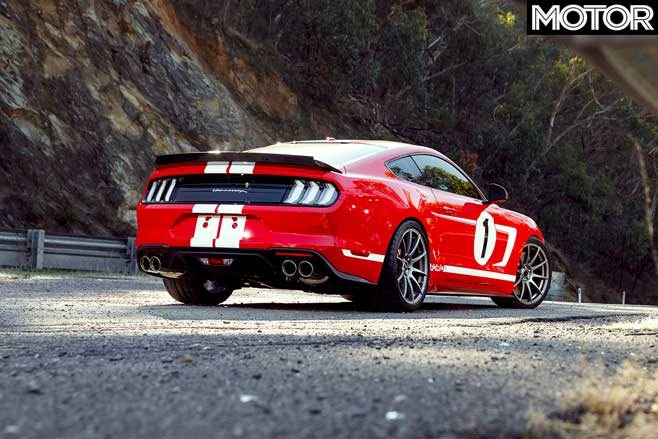 Then there’s its price. Only 19 will be built to celebrate the American brand surpassing 10,000 sales. Four have gone to Adelaide’s KPM Motorsport, the only agent outside the US licensed to sell complete Hennessey vehicles. You can order one for around $190,000, depending on the donor Mustang’s specification.

On these pages it might look like a giant hot wheels car, but in person those stickers and carbonfibre exterior package give it serious head-turning appeal. The wing, side skirts and splitter add a hint of NASCAR racer to the new Mustang’s aggressive surfaces. 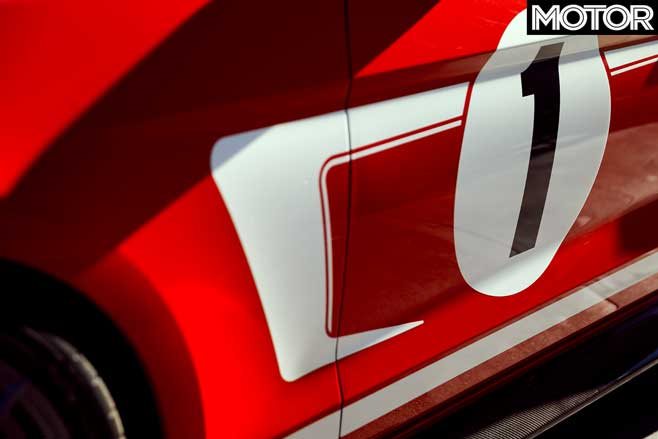 The Hennessey’s lowered stance sports a touch of rake and it hunkers over massive 20-inch wheels that stretch tyre sizes to 275mm at the front and 305mm at the rear. Crucially, that’s 20mm and 30mm wider than the Mustang GT’s stock rubber.

We’ve flown to KPM in Adelaide to unleash an automatic Heritage Edition in the surrounding hills. But with only 50km to gain an impression, and out of respect to its new owner, it’ll be more of a speed date than in-depth road test.

Early attempts at wide-open throttle running are interrupted by harsh interventions from traction control, jolting the car violently as the massive 20-inch Michelin Pilot Sport Cup 2 tyres try to warm up in the cool morning air. So we tread softly for a while. 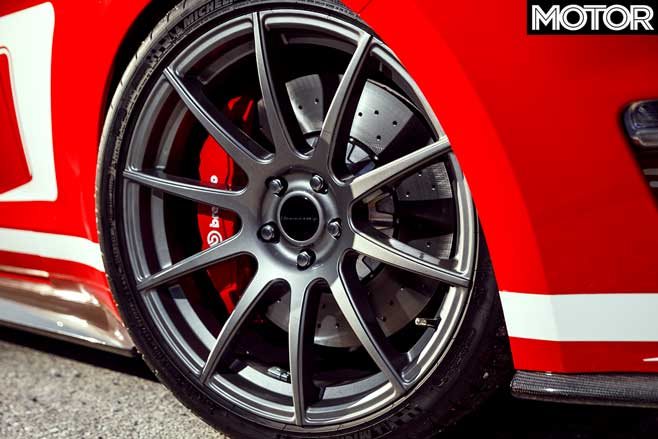 Soon enough we stumble upon a sun-drenched straight where the tarmac is smooth and climbs uphill for a couple of hundred metres. Sensing the opportunity, we stomp the throttle.

The supercharger whine intensifies and the nose lifts slightly. Grip is good, because we explode forward and suddenly all those big numbers come to life. Your organs compress, like you’re in an A380 about to ‘rotate’ and the next bend rushes at you.

But the fun is short lived when the revs hit an invisible soft-cut at 6500rpm. That then falls to 6200rpm. Soon, it’s 6000rpm. A ‘check engine’ light appears on the dash so we park to investigate.

Popping the bonnet to vent some heat we notice the supercharger coolant system’s surge tank bubbling away. Suspecting an unhappy engine, we call KPM Motorsport owner David Roscio for assistance. 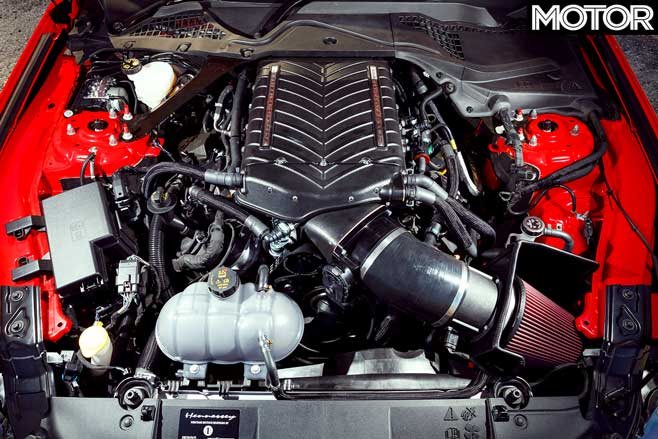 He arrives and is perplexed but also not surprised. He says right-hand drive Mustangs use an Aussie-specific header manifold on the driver’s side. To accommodate the steering shaft, two exhaust pipes downsize to 40mm in diameter where they snake around the shaft. They’re also crimped, impeding exhaust gas flow, and placed right near the cylinder head temperature sensor.

Compounding this, he says the car’s stock cooling fans switch on at only 20 per cent speed when cylinder head temperatures reach 95-degrees. But as we’ve found with stock automatic MY18 Mustangs at Performance Car of the Year, this simply isn’t enough to save them from cutting power.

Taking this on board, Roscio admits future supercharged packages should be equipped with oil coolers. As for us, here and now, he re-flashes the car’s ECU to switch on the fans at 40 per cent speed when temps reach 88-degrees. We set off in the car to salvage an impression with what precious kilometres we have left. 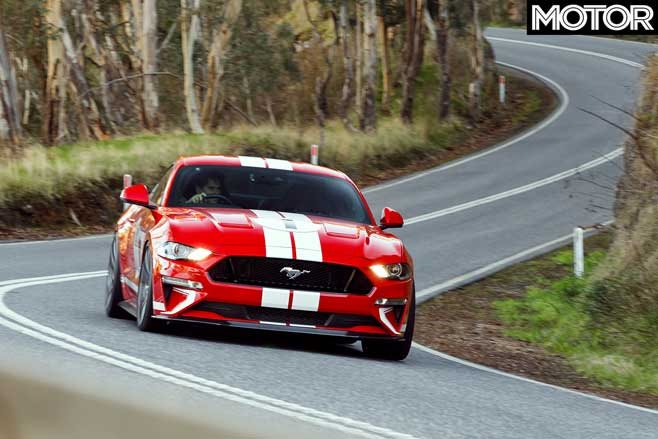 Thanks to a lower centre of gravity and wider tyres the Hennessey has enormous grip which also improves its behaviour through corners. Where a stock car’s rear end would feel nervous into corners, it settles earlier, feels more planted, and the heavier steering weight helps you slow your inputs.

The brakes need a couple stops to reach temperature, but they are full of feel. The stock GT’s brakes bite aggressively in the first few millimetres of pressure, but these offer better control of deceleration.
On the other pedal, that big blower delays throttle response ever so slightly, but retains the car’s stock delivery behaviour. Torque builds early, holds into the mid-range before a heady power peak rushes you to the top-end. But to enjoy it you’ll need to disable all driver aids.

Even in Sport Plus, traction control cuts power to gain grip and then adds it to restart acceleration. It’s a vicious cycle exaggerated by the mode’s harsher shifts. It’s unsettling and a symptom of a traction control system designed to handle 258kW/362Nm less. 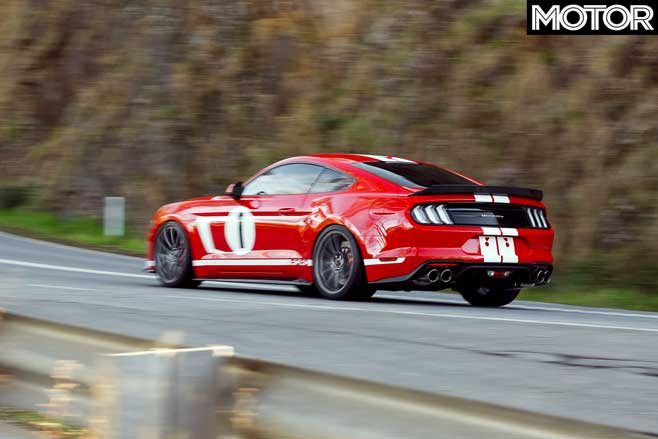 Lowering springs penalise the ride, cut damper travel, and the big 20-inchers thud into potholes. Luckily the stock Magneride dampers have kept some welcome compliance. Put it this way, it’ll be okay on long drives, but we’d only explore all its performance potential on smooth, reliable surfaces.

What is surprising is how placid it is at a more relaxed pace. That 10-speed automatic (it’s also available with a six-speed manual) has no trouble handling the grunt. In normal mode it shifts through gears without a hitch. And although the cat-back exhaust booms at low-revs, it sounds great on overrun and is integrated with the drive modes.

The interior is largely unchanged from an original Mustang GT. It also has Ford’s brilliant Recaro seats. The only visual clue that it’s packing an engine that could power a Texas city grid are those Hennessey floor mats. 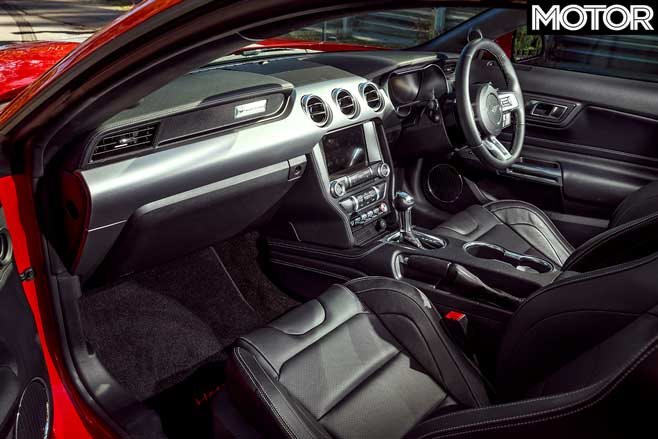 So, should you get one? There are cheaper ways to get an adrenalin fix if you’re simply a power junkie. For example, KPM offers a supercharger package that lifts power to an eye-watering 694kW for $65K.

The Heritage Edition Mustang’s appeal is it’s a well-rounded package. Sure, you need to unshackle it from driver aids to use all the power, leaving you to handle this monster alone, but the grip and brakes match its prodigious outputs in dry, cool conditions. At least for the very short drive we had.

When you consider it costs as much as a BMW M4 CS did new, and matches the Shelby GT500’s exclusivity and power, you can see why you’d put up the big numbers to buy one. Just ask for an extra cooler. 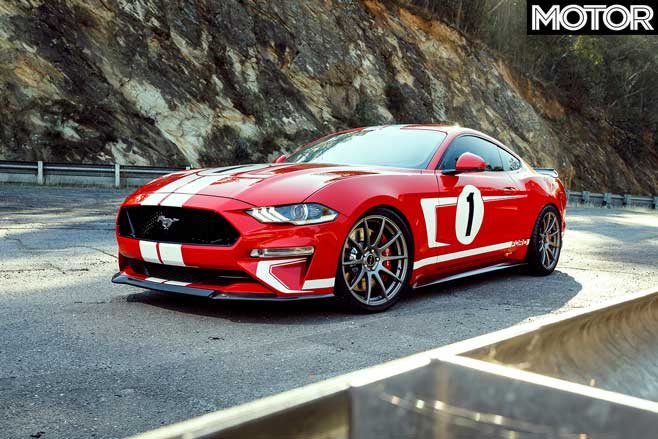 Get the latest performance car news and reviews. Subscribe to MOTOR's newsletter 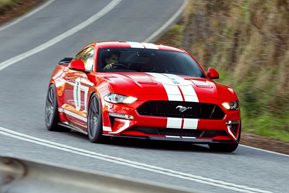 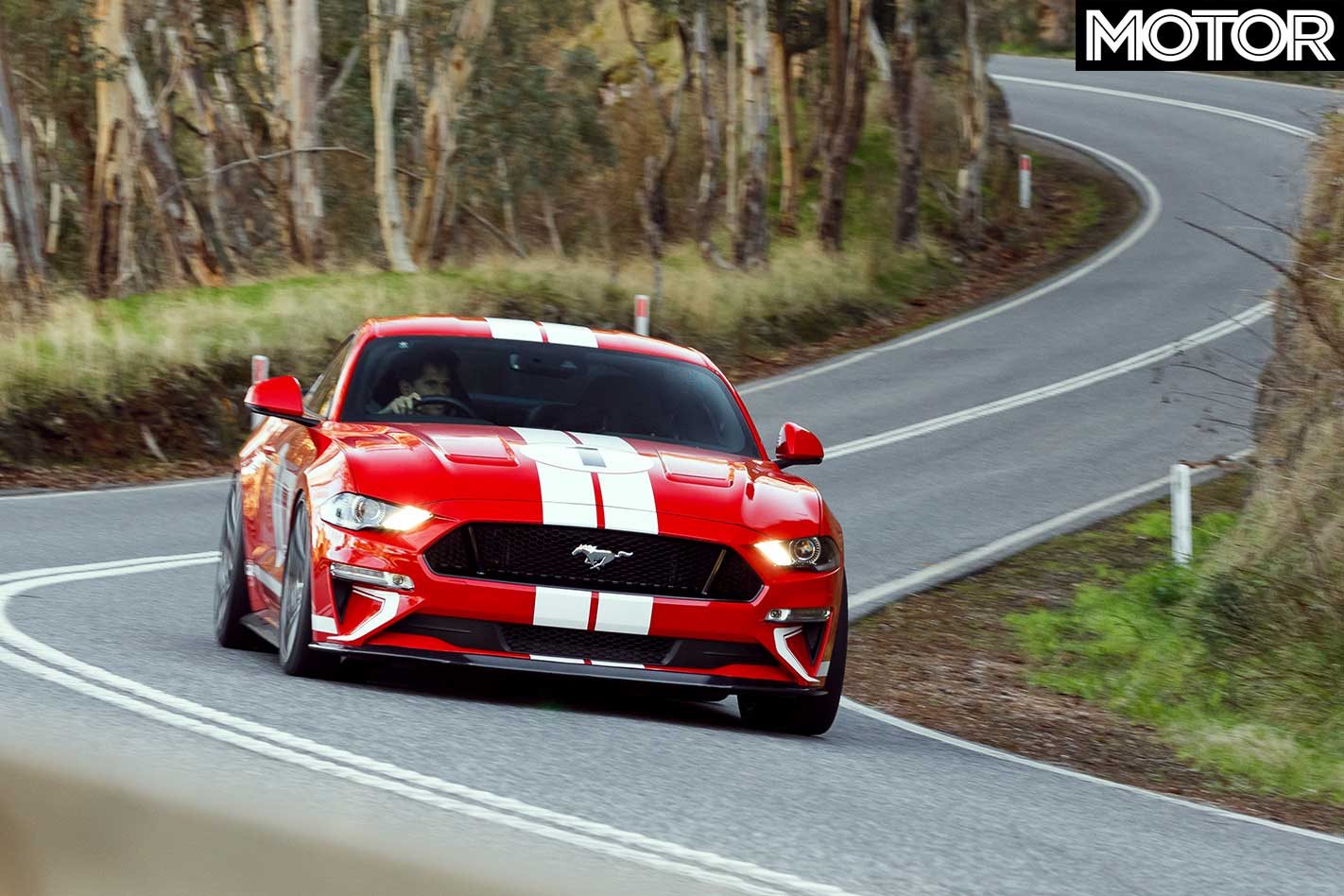 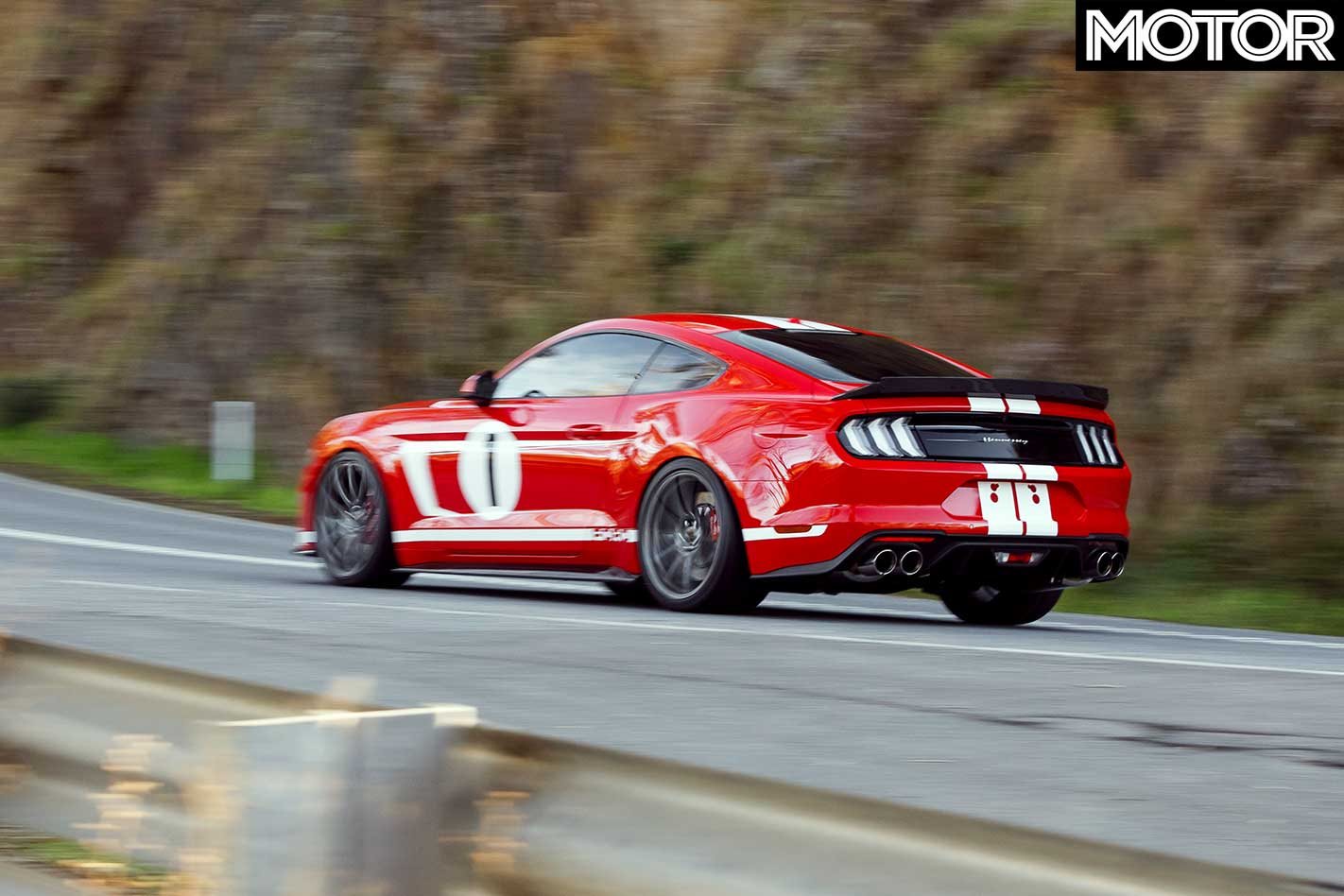 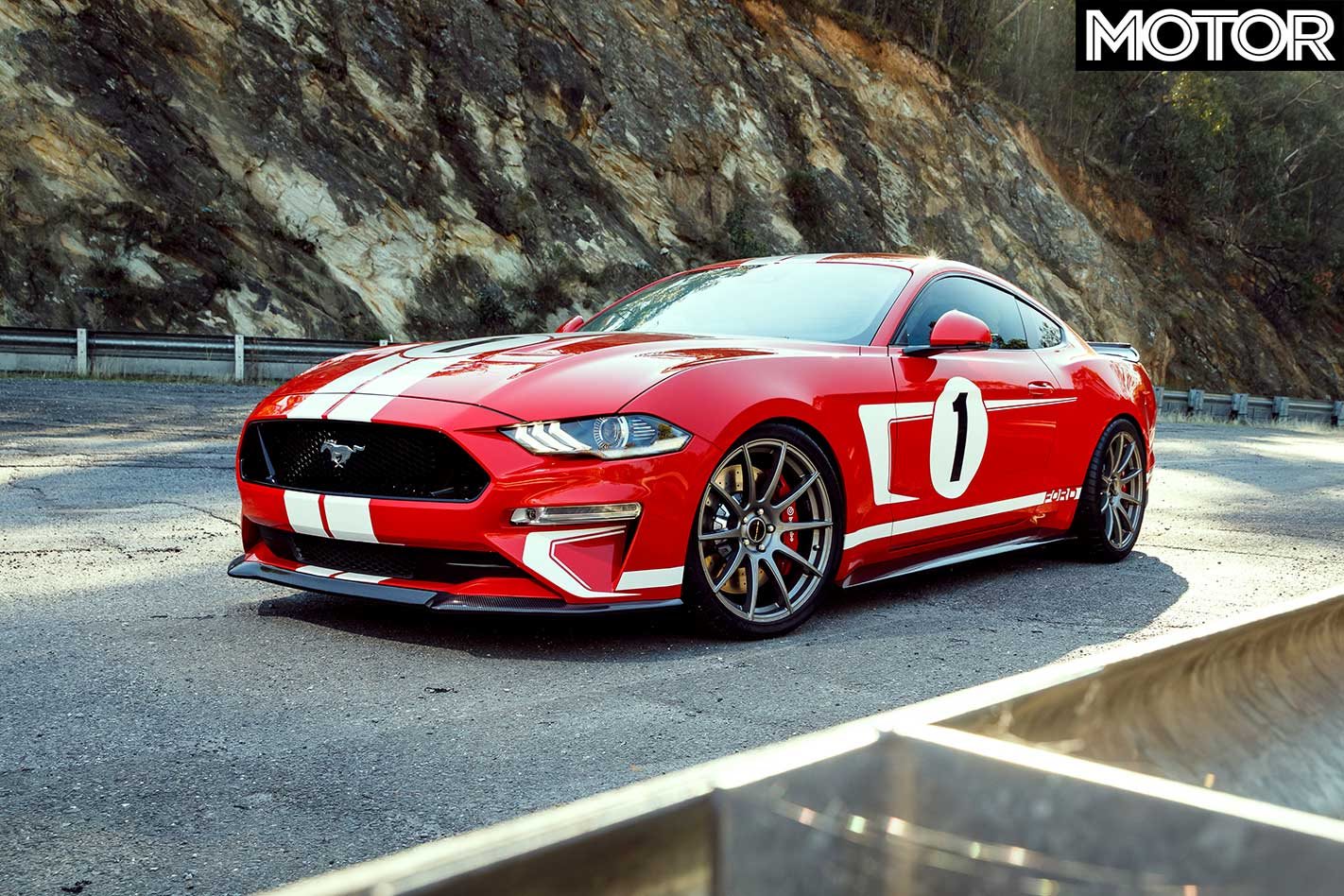 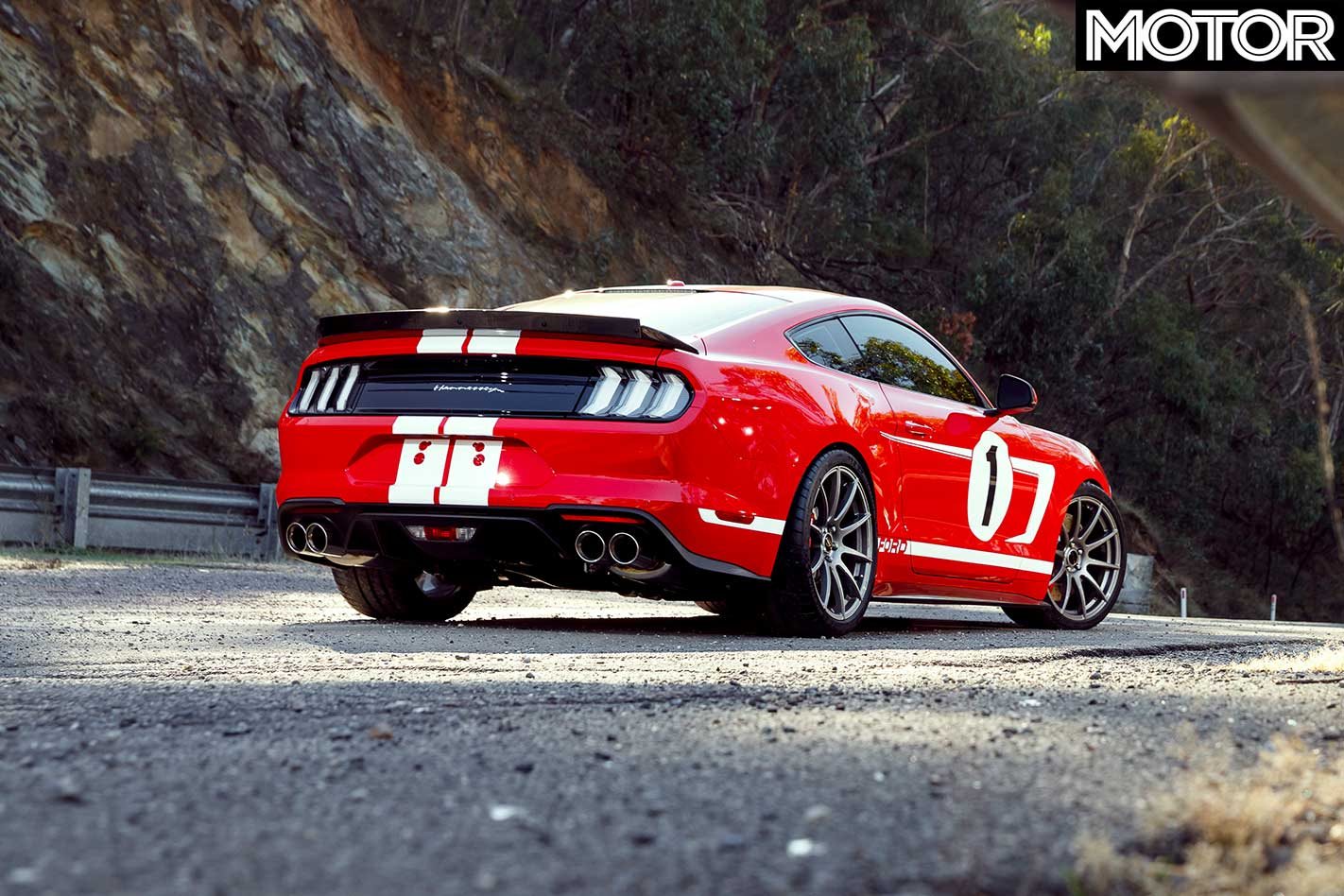 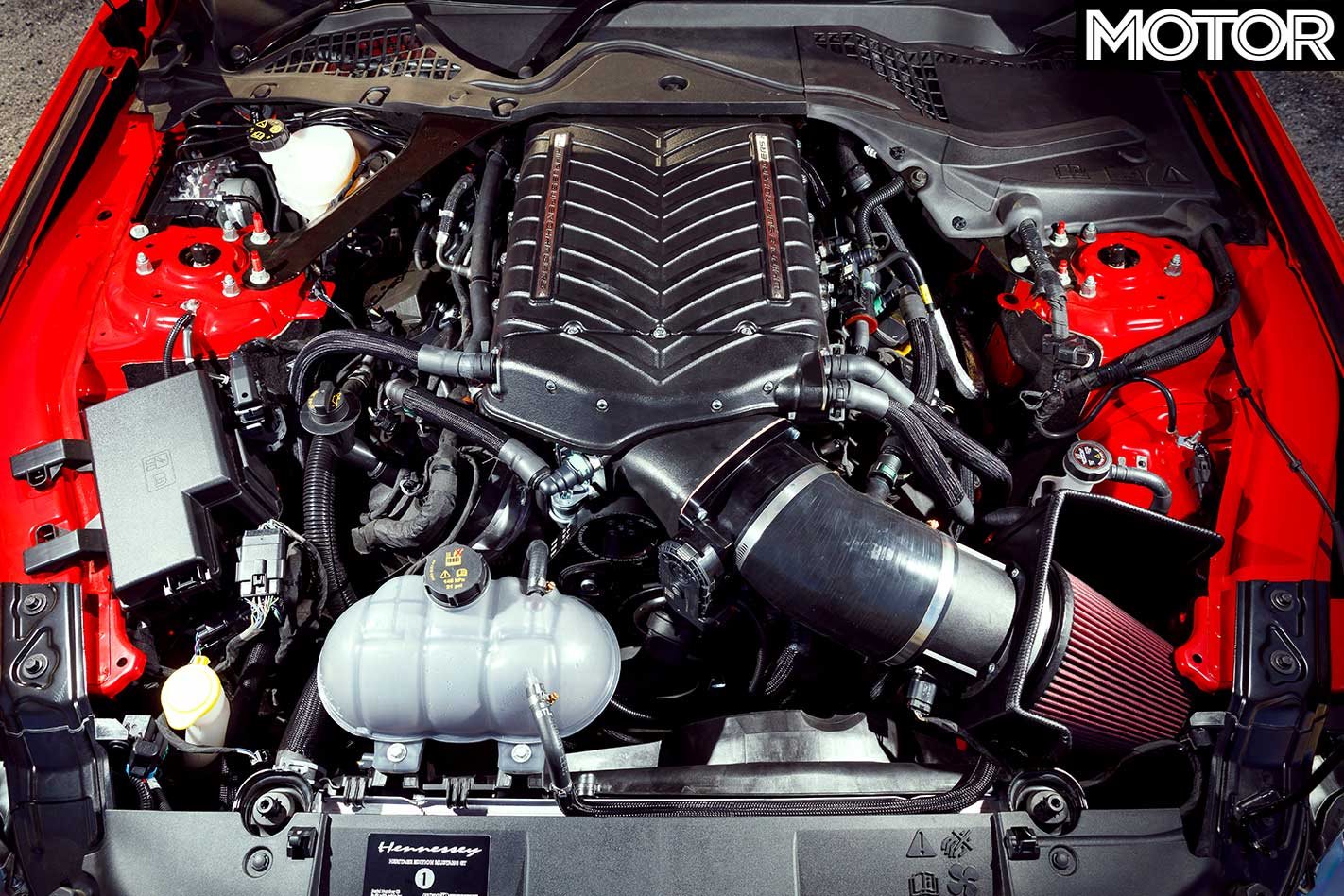 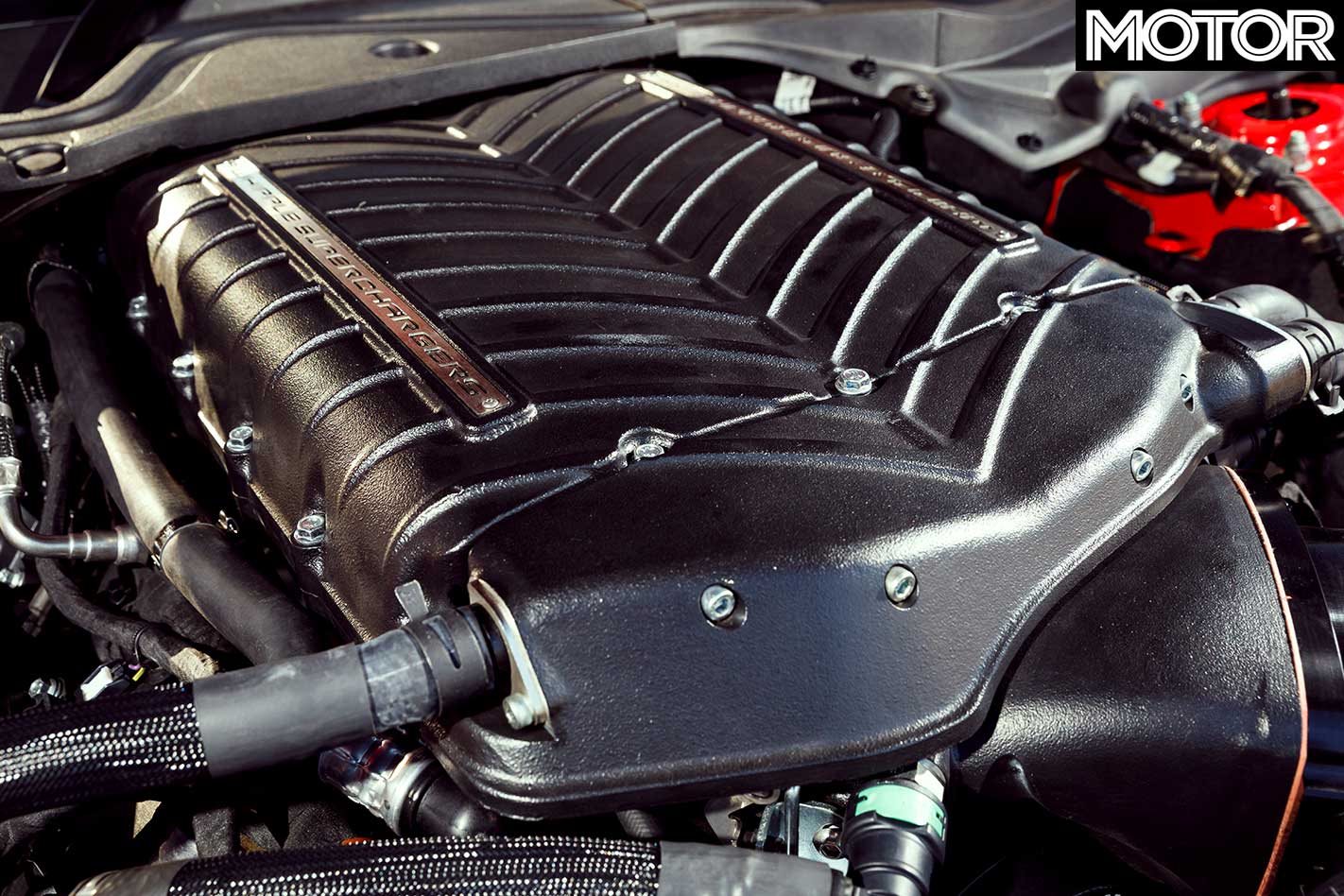 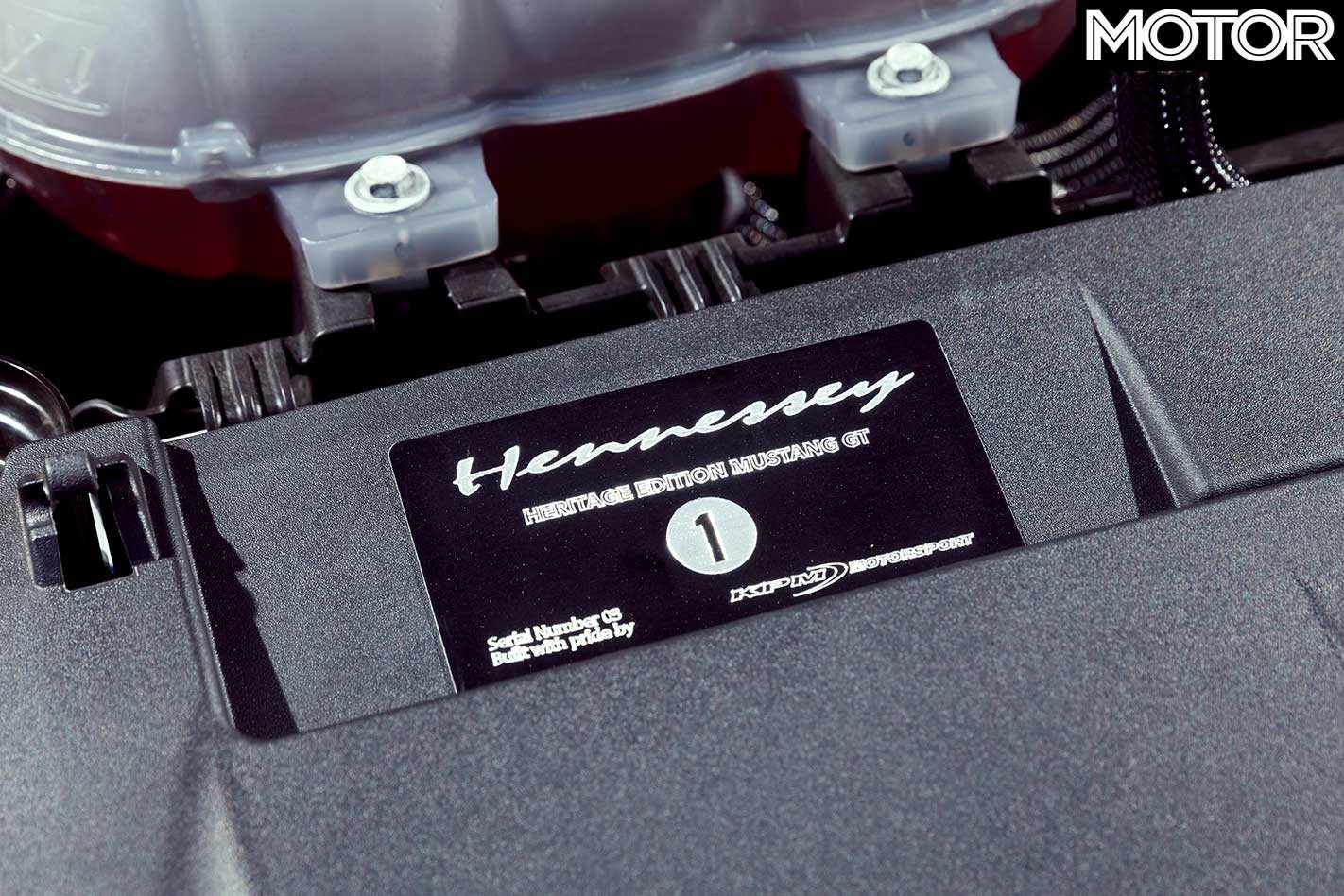 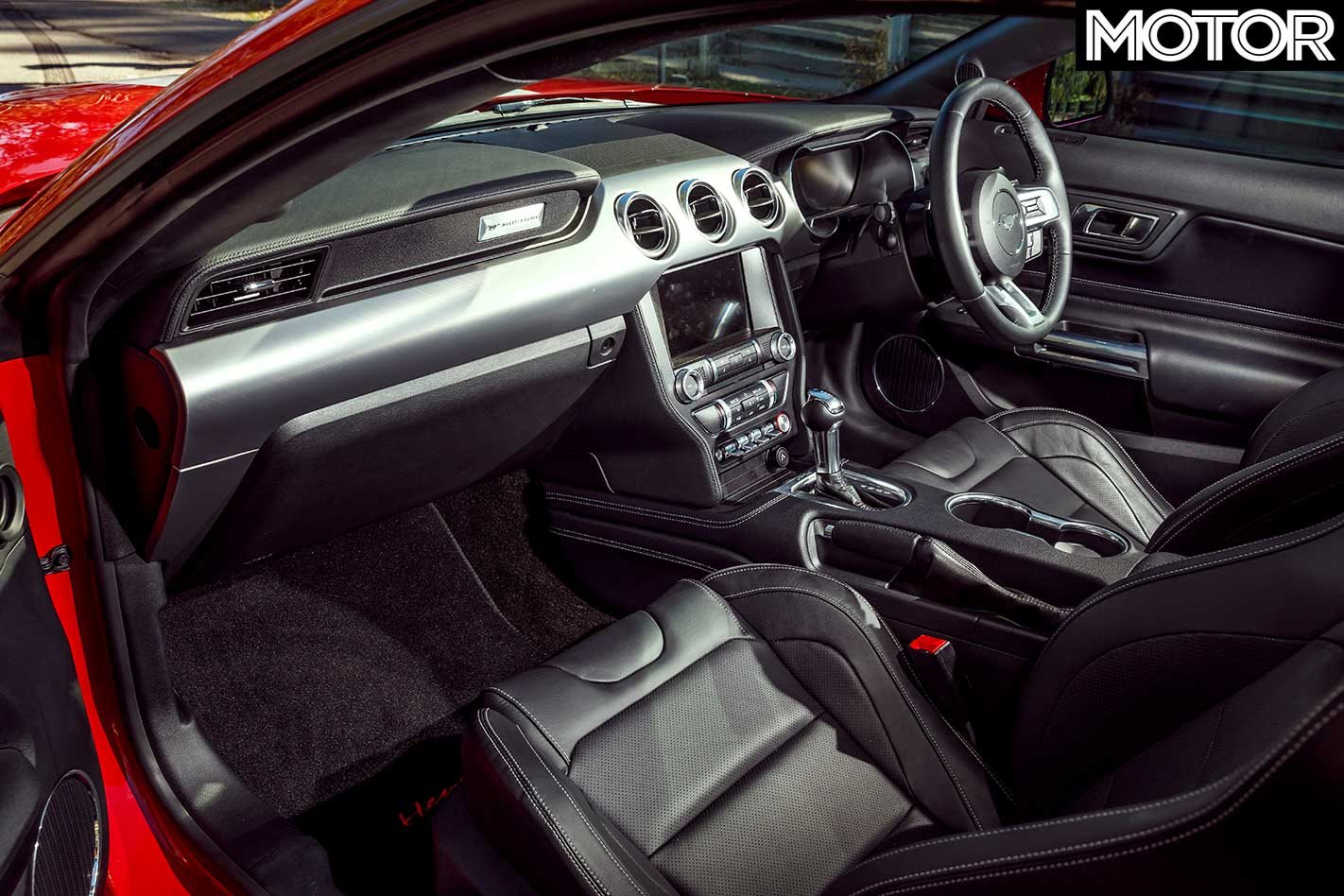 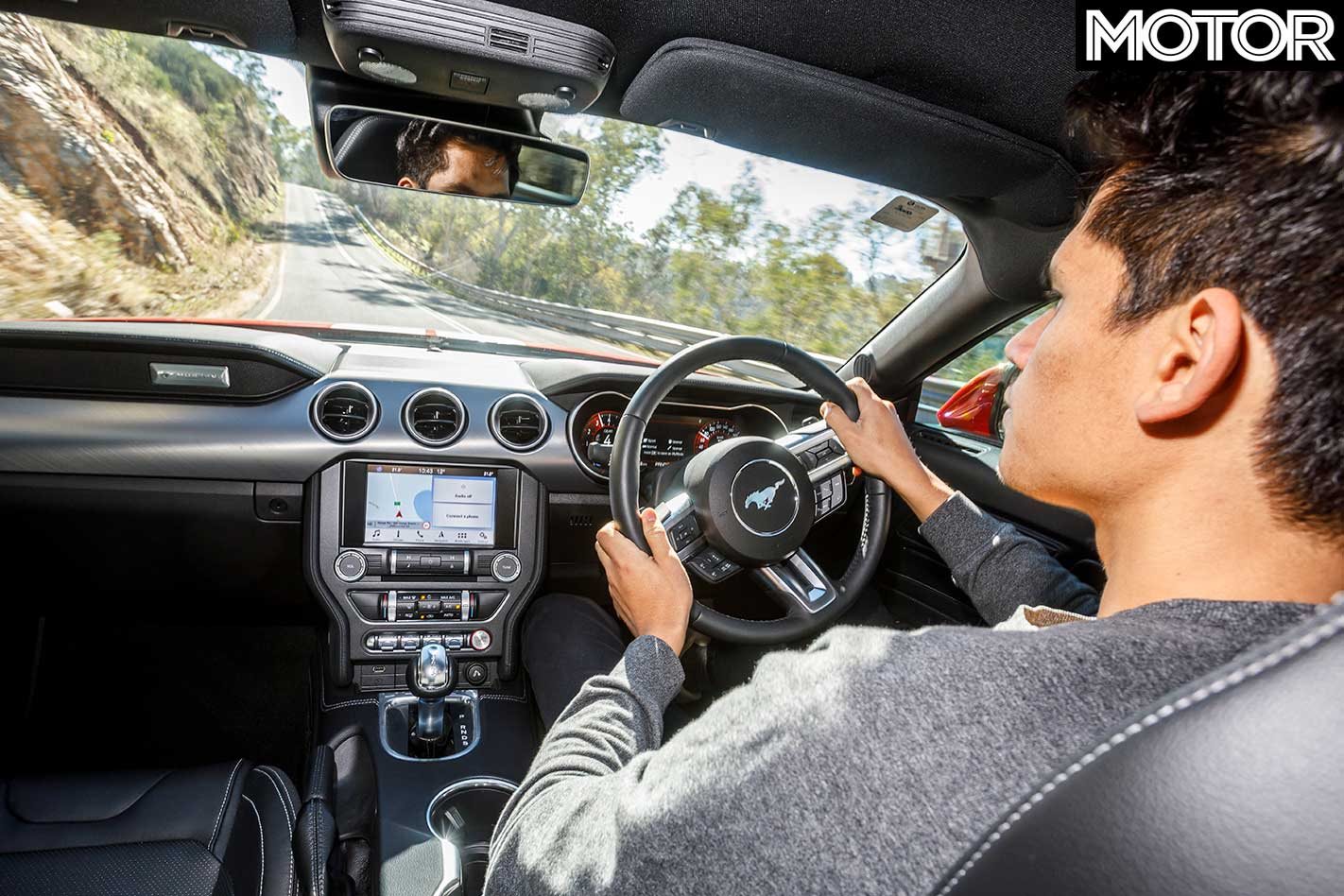 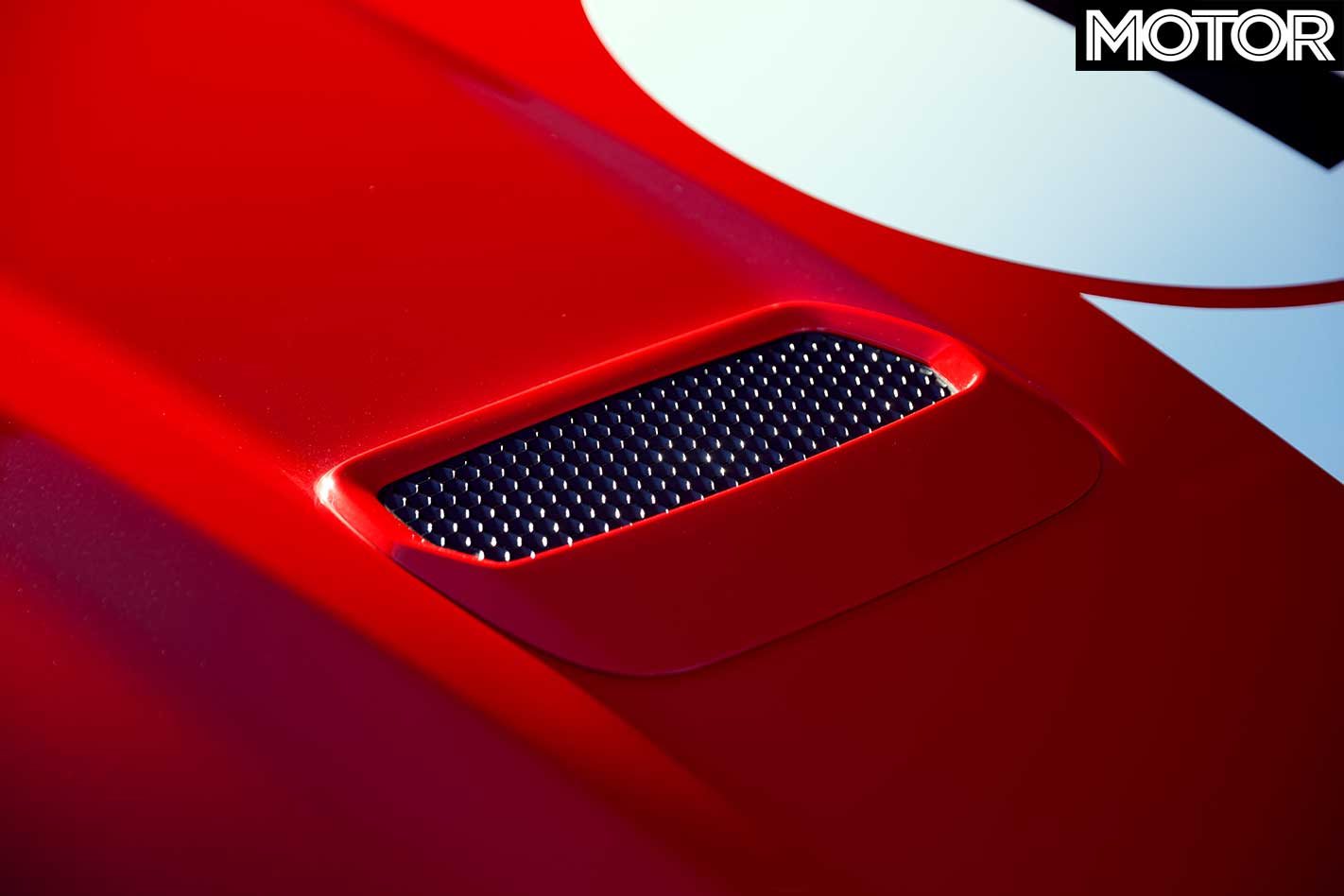 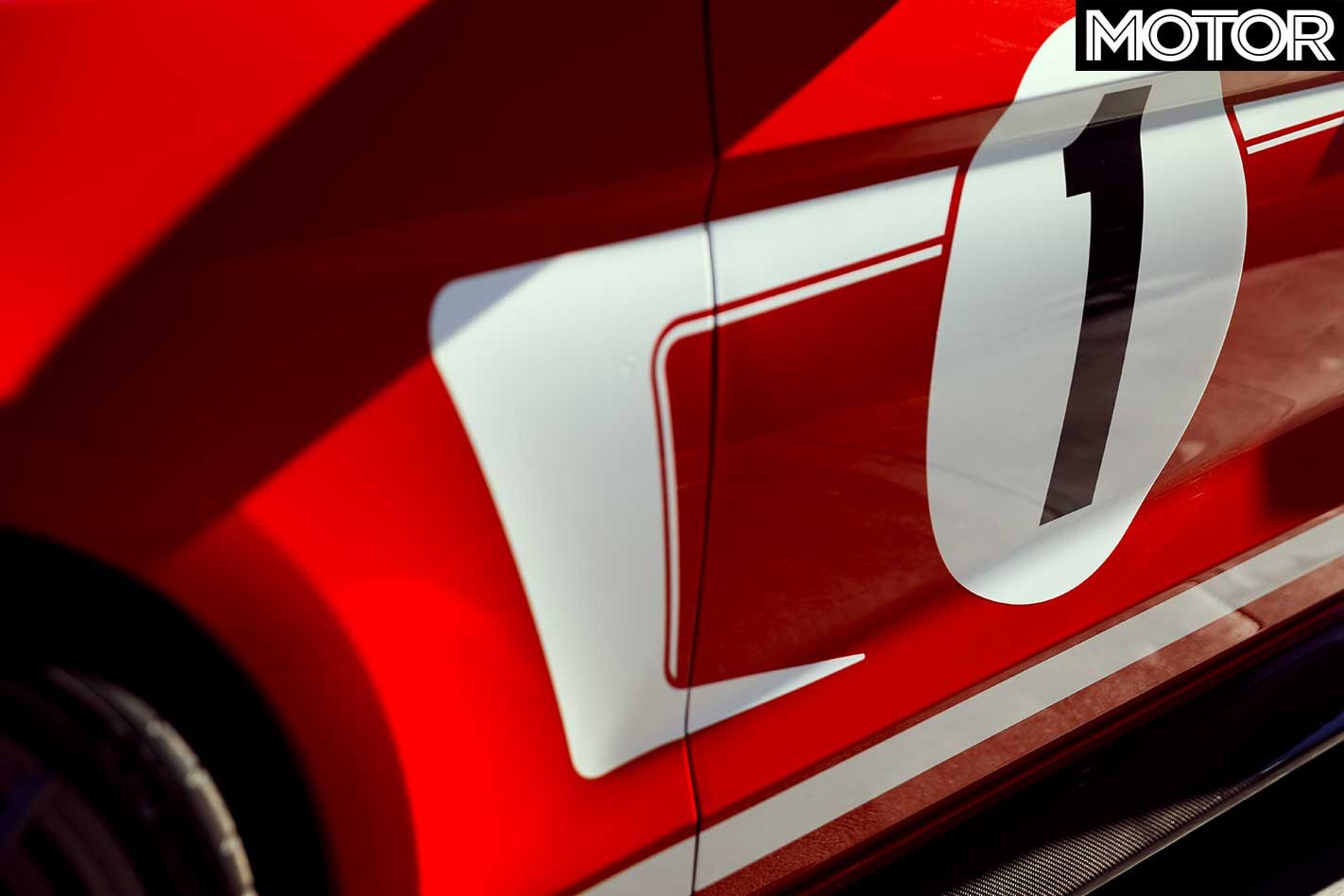 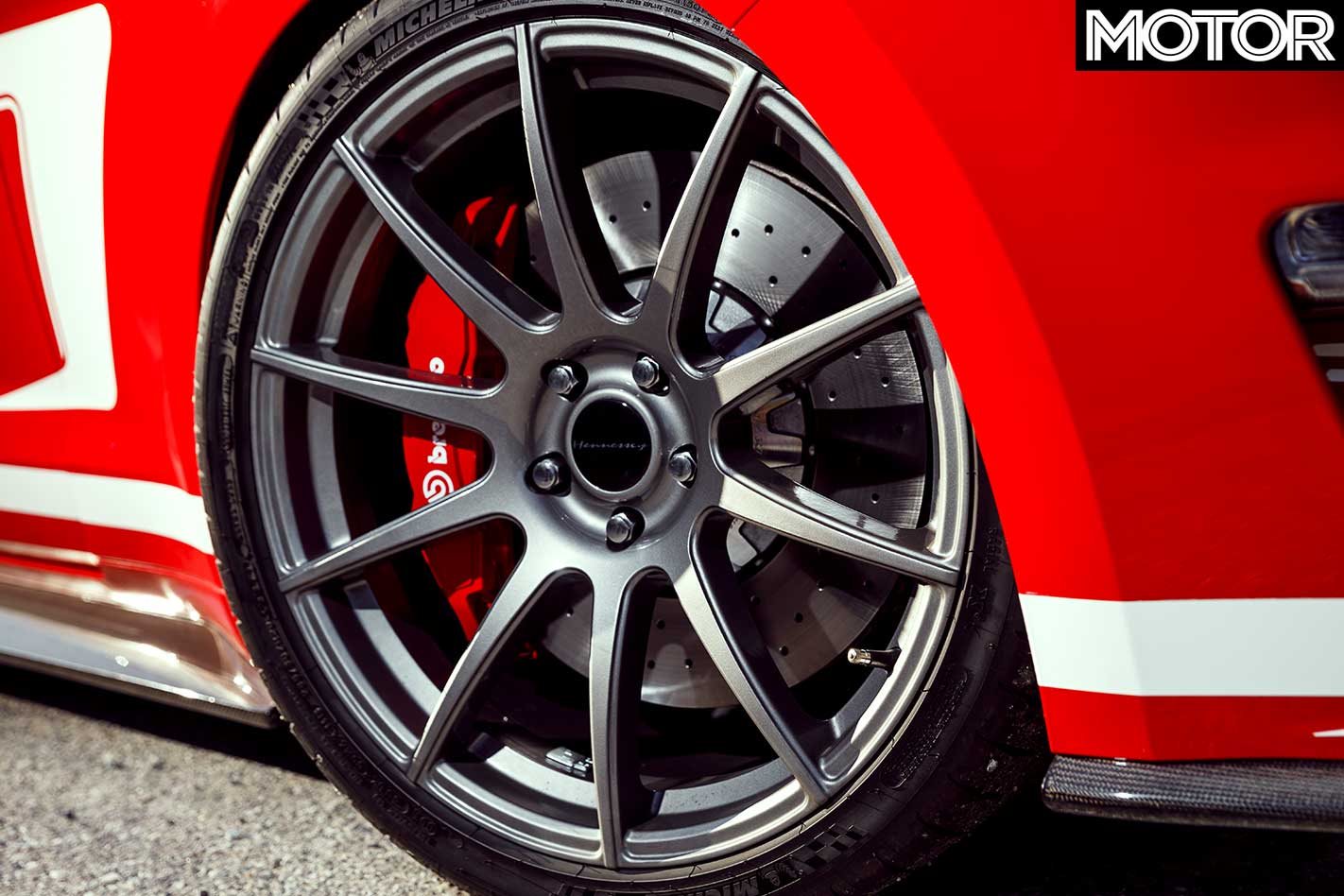 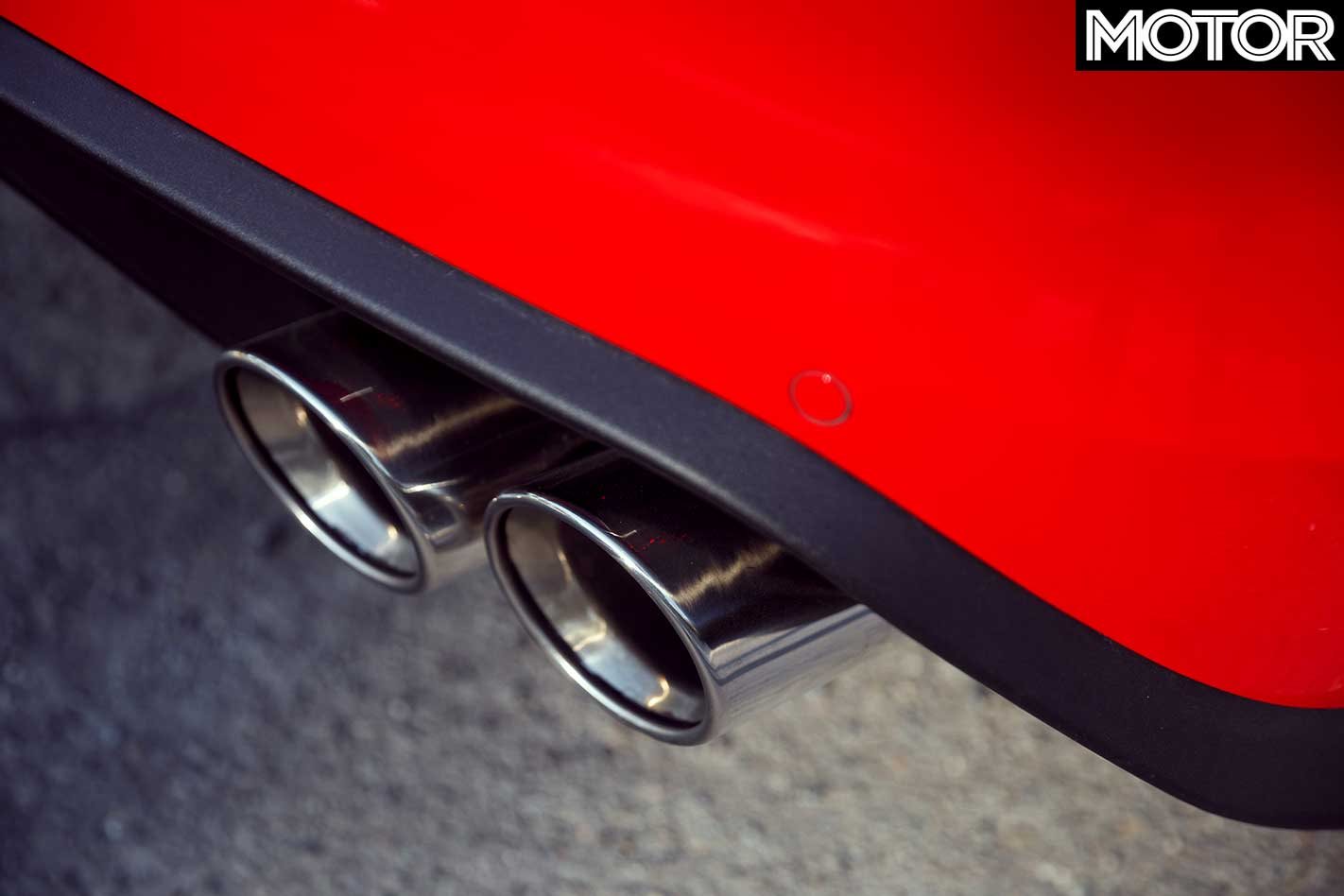 1 / 13 With a lower ride height, the Mustang corners with an aggressive stance