Is this the Swiss army knife of small Mercs?

Comparisons can be odious. I’d rolled in to pick up my new long-termer in a Mercedes-AMG A 45 S. I’m going to nail my colours to the mast in quite spectacular/foolhardy fashion here and declare this the most talented hot hatch that’s ever been built. Not going to say best, but without a doubt the most capable. What’s more the A45 was retina-melting yellow with black contrast alloys. Punchy.

And there, sitting in a forlorn corner of the car park was the vehicle I was due to pick up, an AMG GLA 35 in resale silver. Still very agreeable, but I’d be lying if I didn’t feel that I was arriving with Kim and leaving with Khloe. The A45’s taut focus was replaced by something a bit suburban and, well, adipose. Couple that with a black and red interior that looked as if someone had just flayed a Wiggle and I was left wondering if this was going to be a relationship I’d gel with at all. 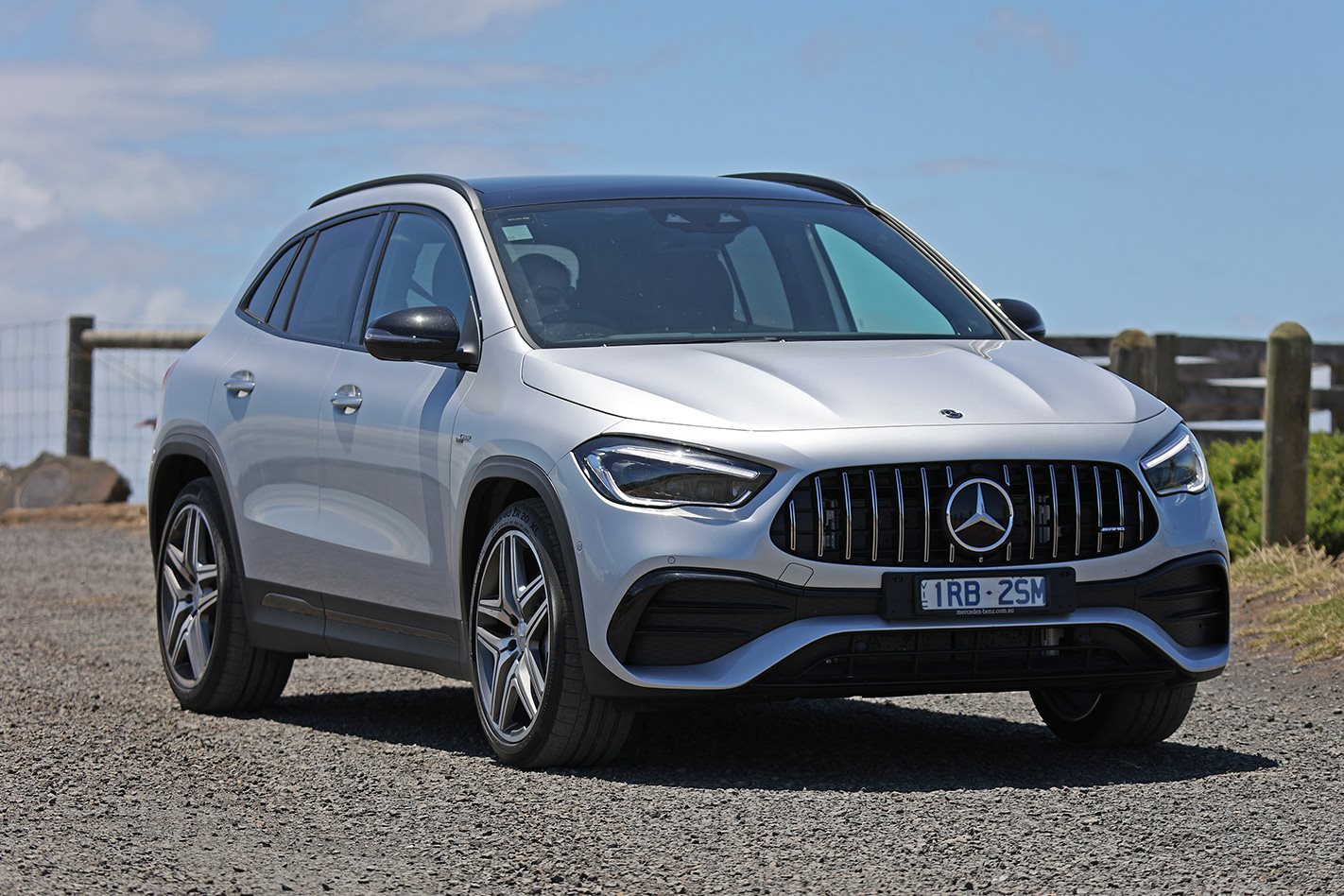 Things picked up rapidly. The seats offered a good deal more padding than the A 45’s cushions and squabs, which aren’t too far off park bench spec. There’s also a stack more headroom, which prevents the cultivation of an Oakley-shaped dent in my scalp on bumpy roads. Finally, there’s a bit more in the way of ride height which, given that plenty of roads from the back of my property are still dirt, certainly gets a tick of approval from me.

I did note that the glitzy piano black transmission surround from the A 45 had been replaced by a more proletarian black plastic, but that’s perhaps no bad thing as it won’t show up fingerprints quite so readily. This being a 35 rather than a 45, there’s no race mode in the manettino dial underslung from the right-hand steering wheel spoke either, but Sport Plus delivers enough whoomphs and bangs from the exhaust to earn the stink-eye from the next door neighbour when he’s working nights.

About the biggest compliment I can give the GLA 35 is that even after stepping out of the hellion A45 S, it didn’t feel slow. A sprint to 100km/h of 5.1 seconds is entry-level Boxster/Cayman quick and I’d bet on the all-wheel drive Merc’s easy repeatability of those numbers every time. I haven’t yet tuned into the optimum permutation of the drive modes, so did the usual and set the Individual mode to comfort suspension and angry everything else. This resulted in a measure of heave, queasiness and generally lax body control on lumpy roads. 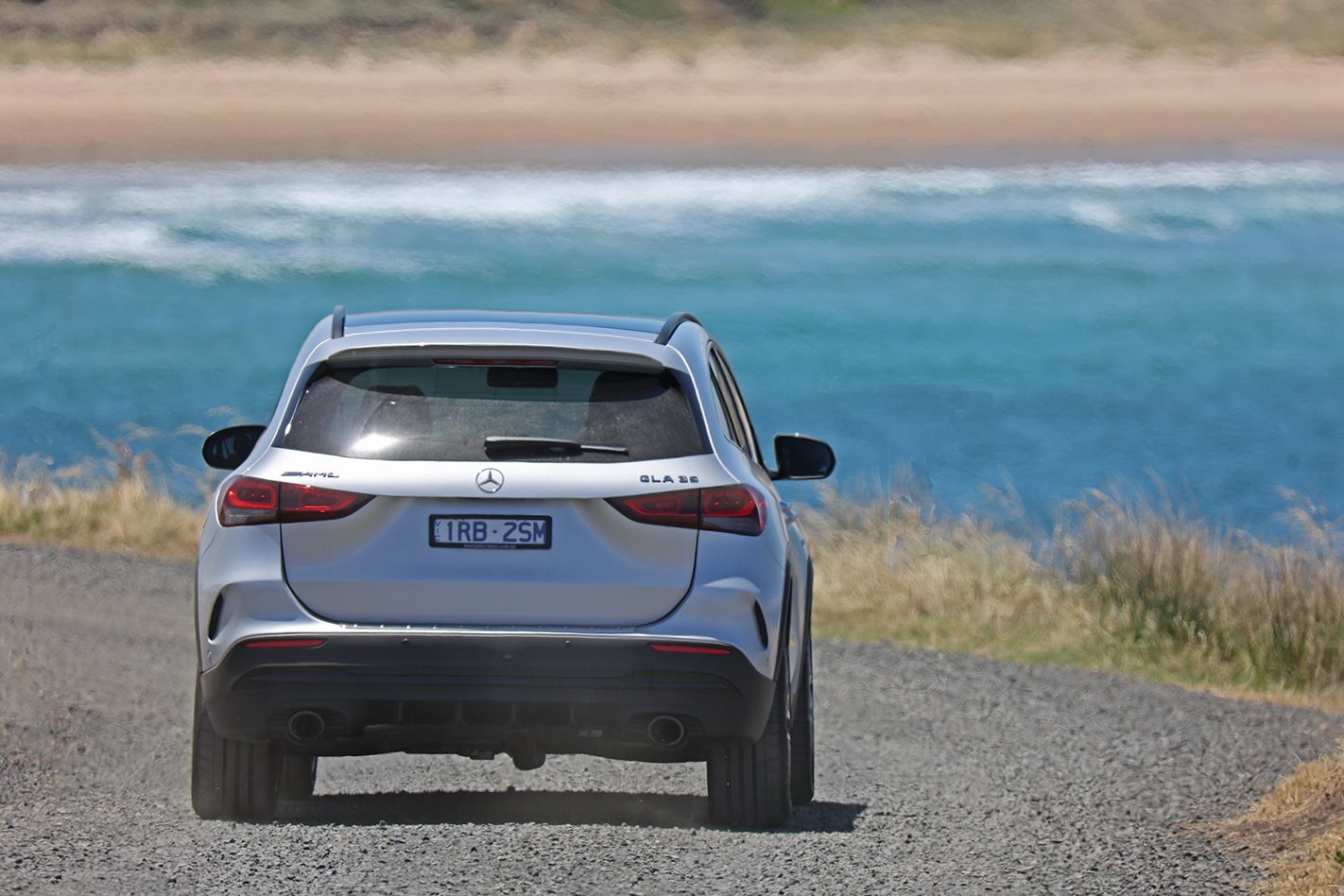 Lashing it down a bit more firmly cuts out the bilious float, but also introduces a measure of nerviness into the secondary response. The ContiSport Contact 6 tyres also resonate a little on coarse chip, but certainly not to the extent of the lower-profile Pilot Sport 4S rubber fitted to the A 45 S.

One curious quirk I’ve encountered is that the GLA 35 is entirely intolerant of the sort of casual tickling of revs at a red light to prevent the idle-stop actuating. Even with a faint breath of revs and the right clog on the brake, it can actuate the launch control system, which then gets itself into a pickle if you pull away gently, jerking inelegantly. I’ll probably just get used to killing idle-stop altogether, as the button is conveniently located adjacent to the starter button. 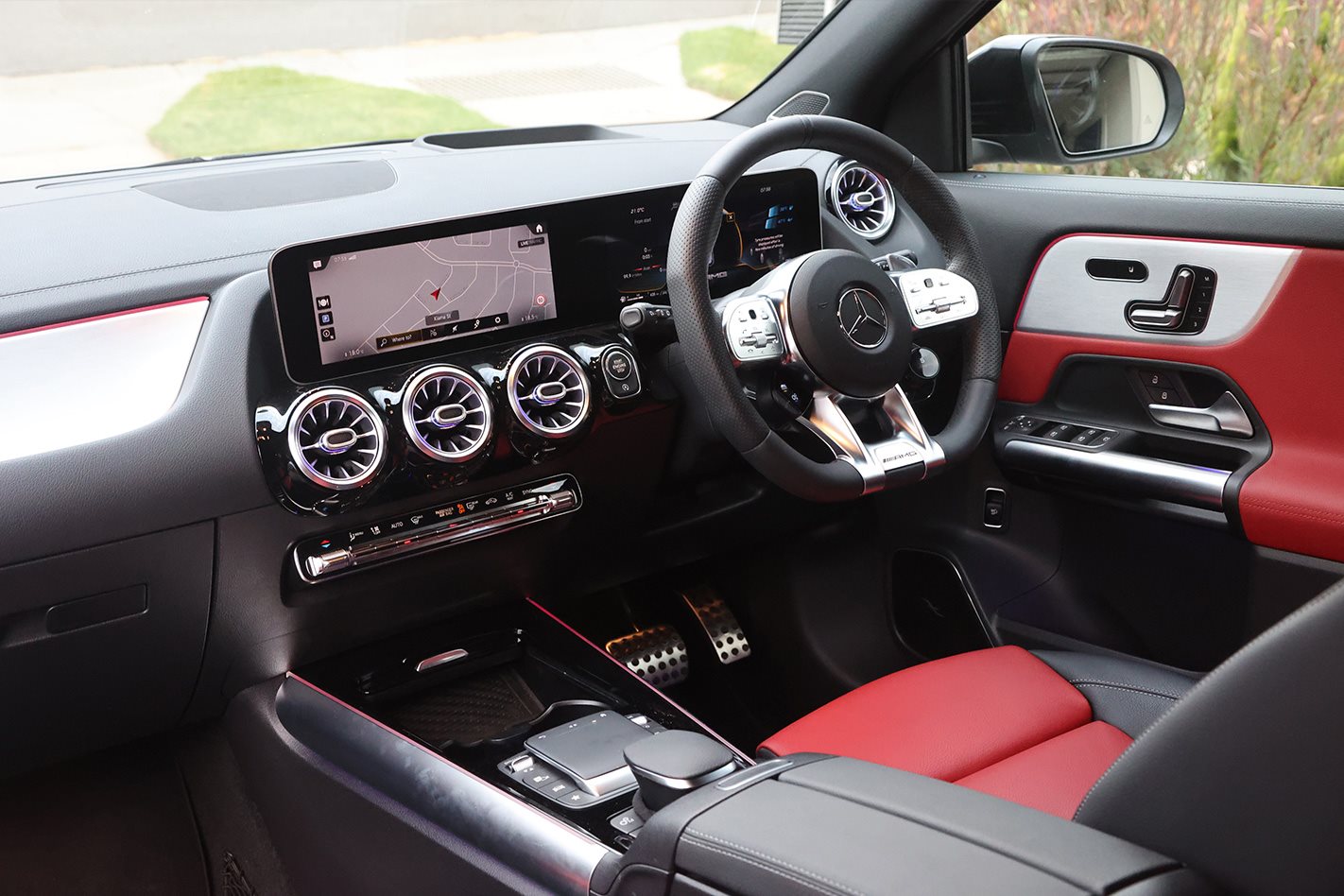 I’ve never run a Mercedes with the MBUX infotainment system as a long termer, so will probably need to pick ex-Wheels editor Alex Inwood’s brain on how to get the best from it. The voice assistant chimes in with annoying frequency if you so much as mention the word ‘Mercedes’ in the vehicle and it’s now referred to as ‘the M word’. I’m already starting to have nightmares about sitting in an automated car wash and having somebody shout, “Hey Mercedes, open sunroof” at me through a megaphone. I’m putting off the inevitable with the easy familiarity of the car’s excellent wired Android Auto connection.

There’s certainly a steep learning curve involved with the AMG GLA 35 but that often bodes well for a good long-termer, the vehicle revealing itself little by little over the course of an extended tenure. I’m already loving how easy it is to flick the eight-speed dual-clutch into manual mode, or firm up the dampers for a particular set of corners. I get the impression that the complexity of this car means that no two users will ever interact with it in quite the same way. Every time I drive it, I discover a new function. This could continue for quite some time. Some buyers will love that, while others might find such depths unnerving.

While I’m still trying to get under this GLA 35’s skin, there’s something grin-inducing about running a car that’s as quick as a VFII SS-V in a straight line, which can clamber up my Lhotse Face of a driveway, easily seat four grown-ups, yet drink fuel at a modest 7.4L/100km. In theory. More on that later. - AE 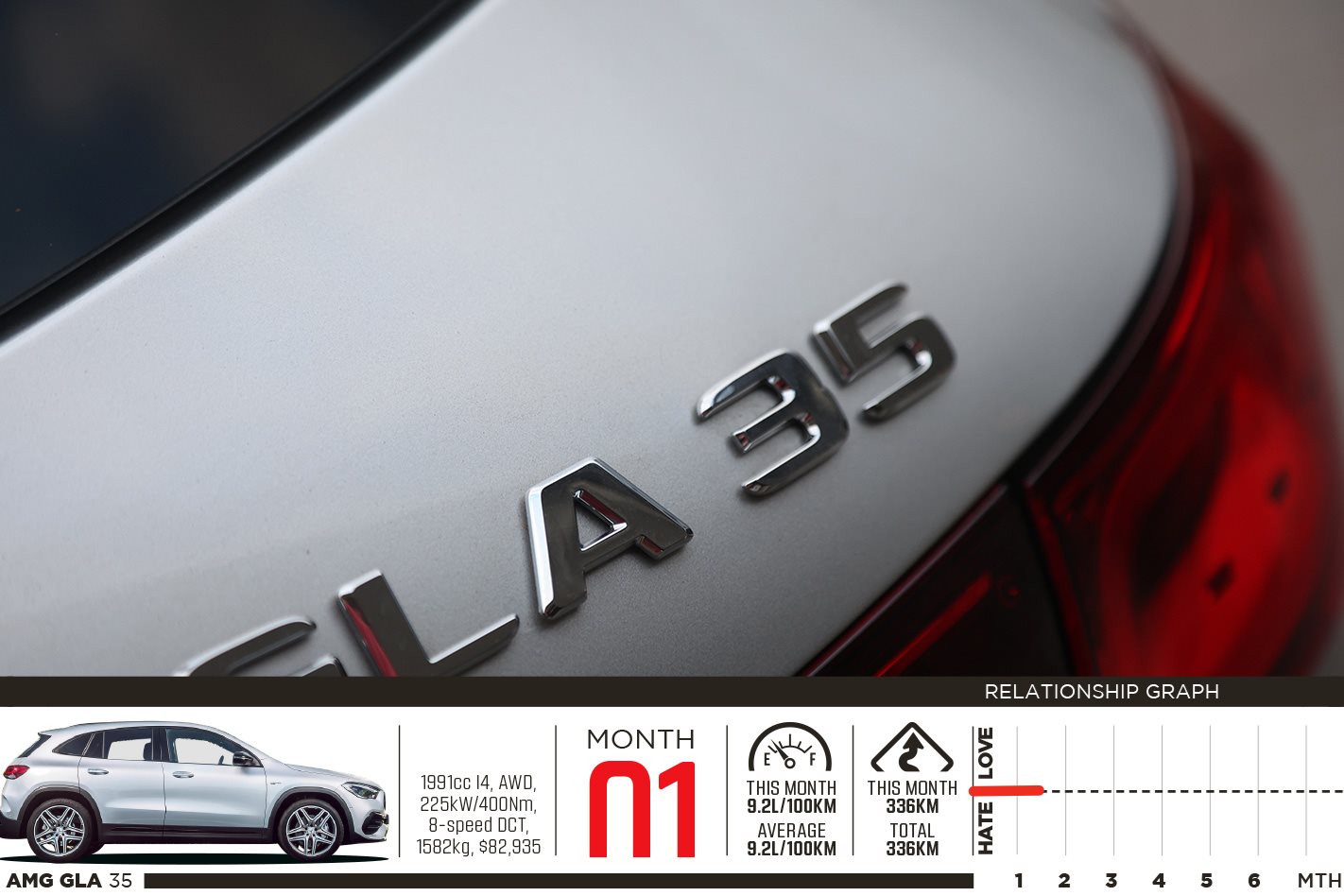 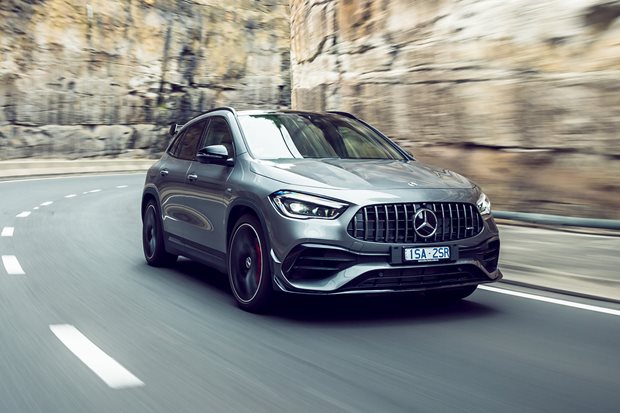 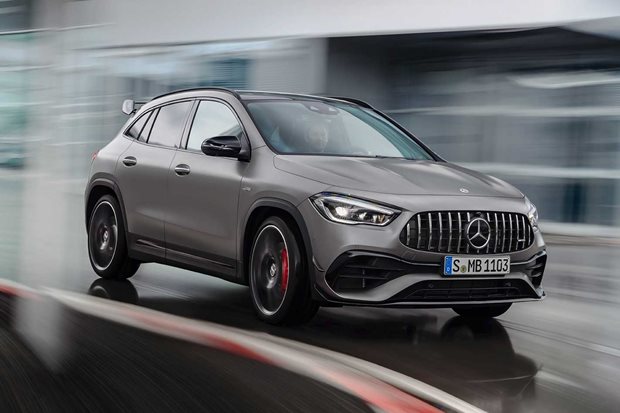 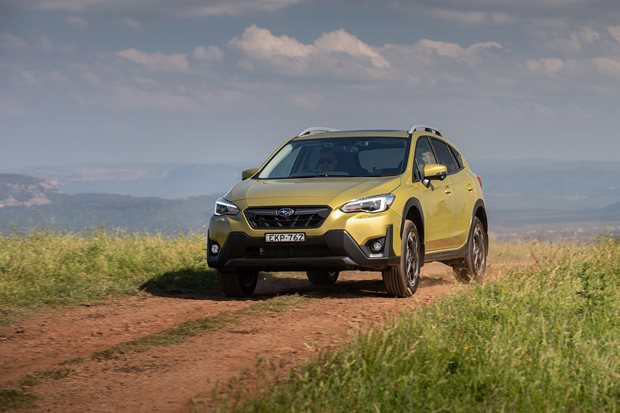