TWO of the most popular budget luxury small hatches go head-to-head to determine which gives the most for the least amount of dollars. Audi’s A3 1.0TFSI has long held the title of “most affordable” in the segment, but Mercedes-Benz Australia reckons the newly-arrived and smartly-priced A180 City Edition can challenge it.

Audi introduced its three-pot A3 at the end of 2016 as a new entry-level variant to its popular small hatch family, stripping a cylinder from the previous inline-four powered base and turfing the independent multi-link rear suspension for a simpler (and less costly to manufacture) torsion beam rear instead.

Priced at $36,200 it easily undercuts every segment rival, however the Mercedes-Benz A180 City Edition, a limited-run special that will stoke sales until the arrival of the all-new fourth-generation A-Class in the middle of 2018, challenges the Audi with a $39,990 driveaway price that’s available until the end of February. After that point, it’ll become a $1925 option on top of the regular A180’s retail price of $38,700. And it’s certainly got an edge in features. While the A3 rolls on 16-inch alloys, the A180 gets glitzier 18-inch AMG items. The A3 illuminates the road ahead with xenon bulbs, the A180 City Edition uses more efficient LEDs. The A3 has cloth seats, the A180 wraps them partially in leather instead. You get the idea.

The A180 also packs keyless ignition, shift paddles, privacy glass and blind spot monitoring as standard, features missed out on by the A3. Both cars have AEB, but the Benz’s nine-airbag count puts more cushioning around occupants than the Audi’s seven ‘bags. The Audi might retail for less however that’s not enough to offset the A180 City Edition’s substantial lead in value-for-money – especially if you buy the latter before the end of February. 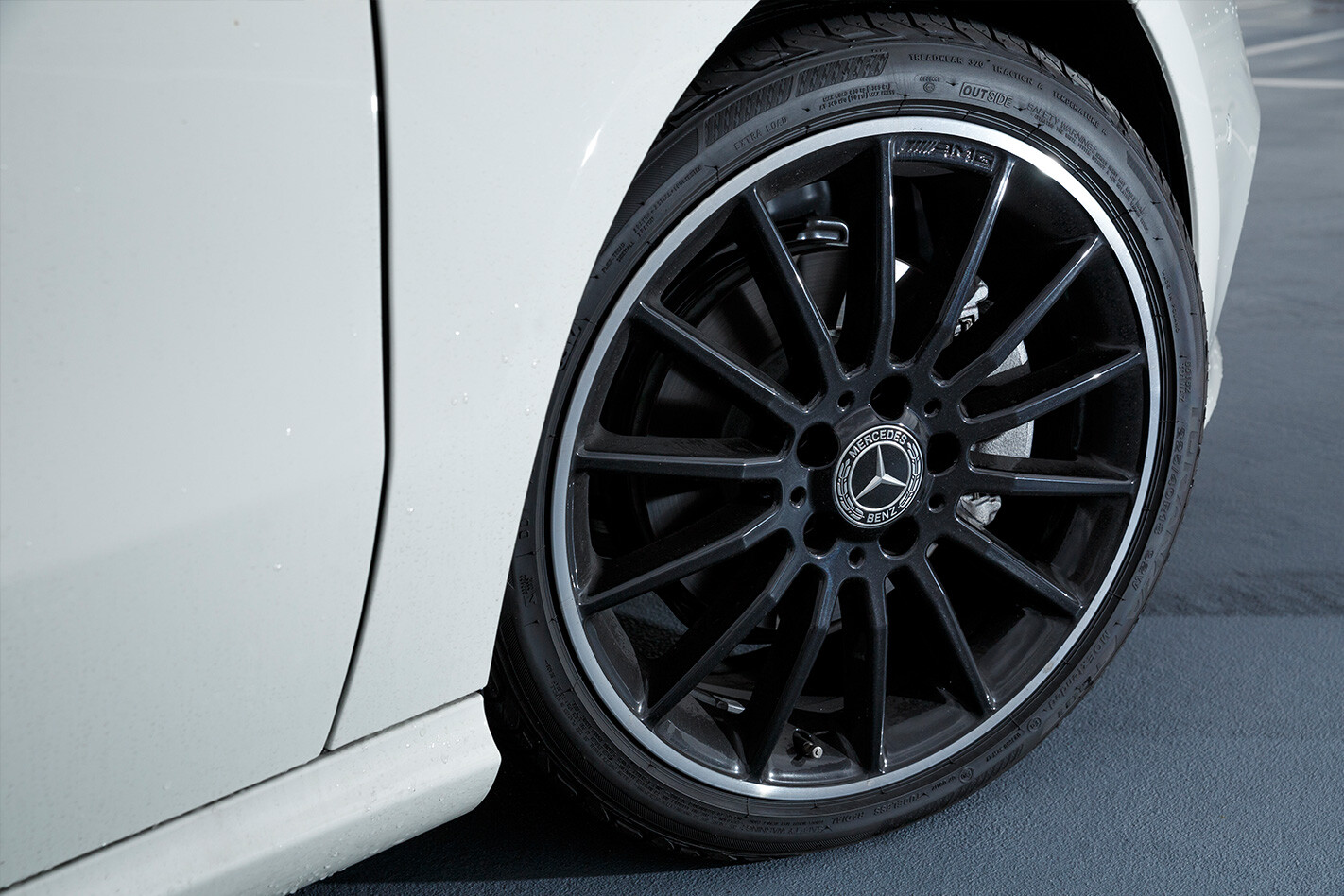 The Benz’s Garmin Map Pilot system looks quaint, with graphics that would have been cutting-edge ten years ago, but are terribly outdated today. The A180 may have a digital radio tuner as standard (a cost option on the Audi), yet the A3’s MMI infotainment setup shows it the way forward with a much slicker interface and more intuitive controls. Side-by-side, we prefer the Audi’s screen even though at 7.0-inches it’s smaller than the A180’s 8.0-inch unit.

But that’s all thrown upside-down by the Benz’s standard inclusion of Apple CarPlay/Android Auto smartphone mirroring, which brings a more sophisticated interface and web-enabled features just by plugging in your phone. It’s enough to have us looking on the A-Class’s infotainment in a more favourable light, even though the Audi’s has more polish straight out of the box. 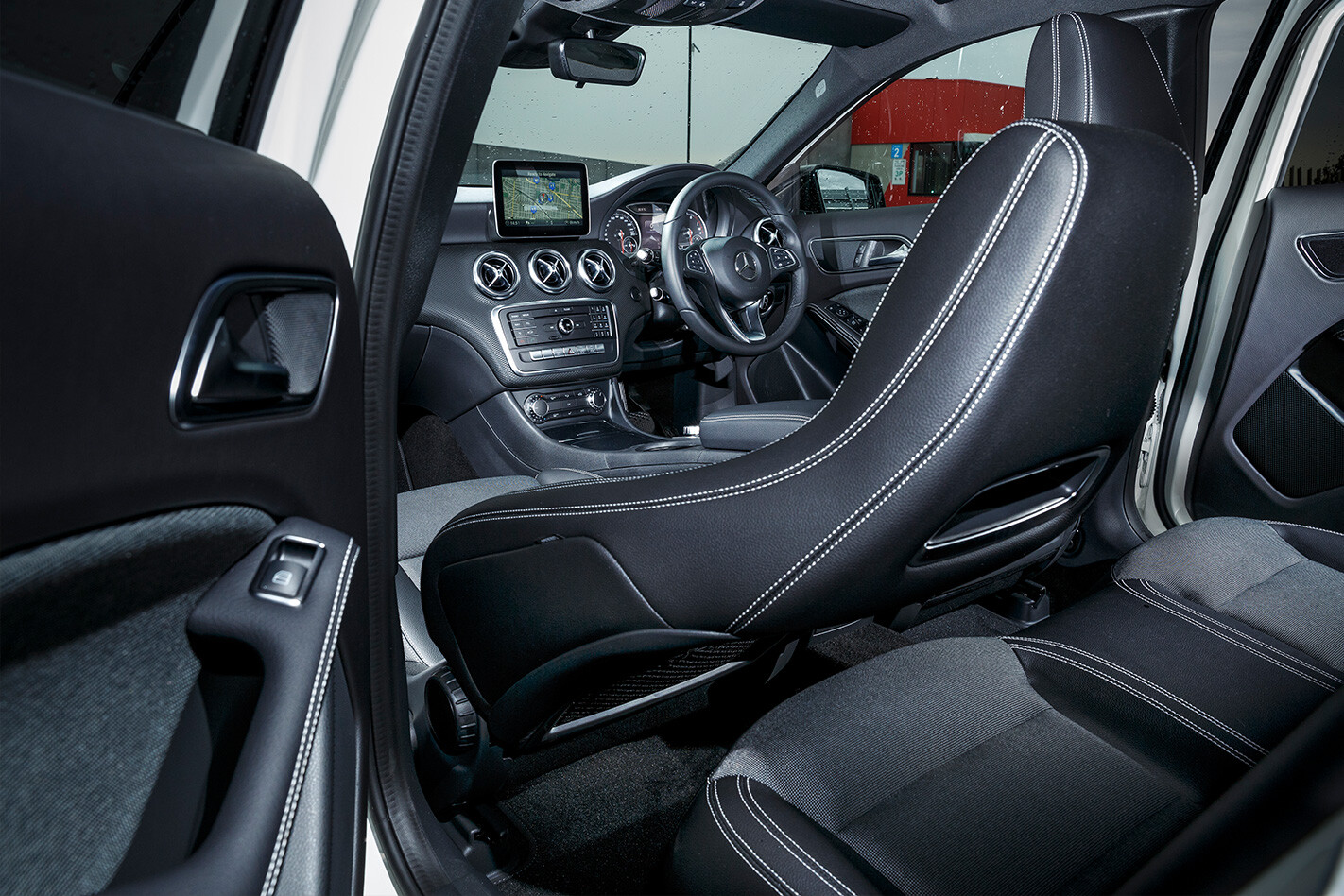 Ignore the screens, however, and the Audi is the car that is more appealing. Despite front seats that aren’t as enveloping or supportive as the A180 City Edition’s sports seats, the Audi’s interior design is more cohesive and timeless than the A-Class’s somewhat heavy-handed cabin, which suffers from the tacked-on appearance of its infotainment screen, and the dated layout of its centre stack buttons.

The A-Class also suffers from a claustrophobic rear seat thanks to its high beltline and low roof – things the notably roomier and brighter A3 isn’t burdened by.  The A3’s glasshouse simply lets in more light thanks to an extra pane of glass behind the rear doors (which technically puts the A3 halfway between a wagon and a traditional hatchback).  Audi wins the boot space competition too with its 380 litre seats-up capacity, versus the A-Class’ 341 litres.

The A3’s 1.0-litre triple-cylinder turbo is a tiny engine compared to the bigger-lunged A180’s 1.6 turbo, but the Audi’s ace-up-the-sleeve is its 150kg weight advantage over the 1425kg Merc. Extensive use of lightweight materials and a less complex rear suspension help the A3 1.0 TFSI pare back the kilos, and though the 85kW/200Nm three-pot is 5kW behind the Benz’s motor, it’s the Audi that has more straight line zip.

Meanwhile, the Audi’s transmission also has more talent. Both cars take power to the front wheels via seven-speed dual-clutch automatics, but the A3’s cog-swapper has smoother take-off from standstill, crisper gearchanges, swifter kickdown and more intelligent shift mapping that rarely leaves the engine outside of its torque band. 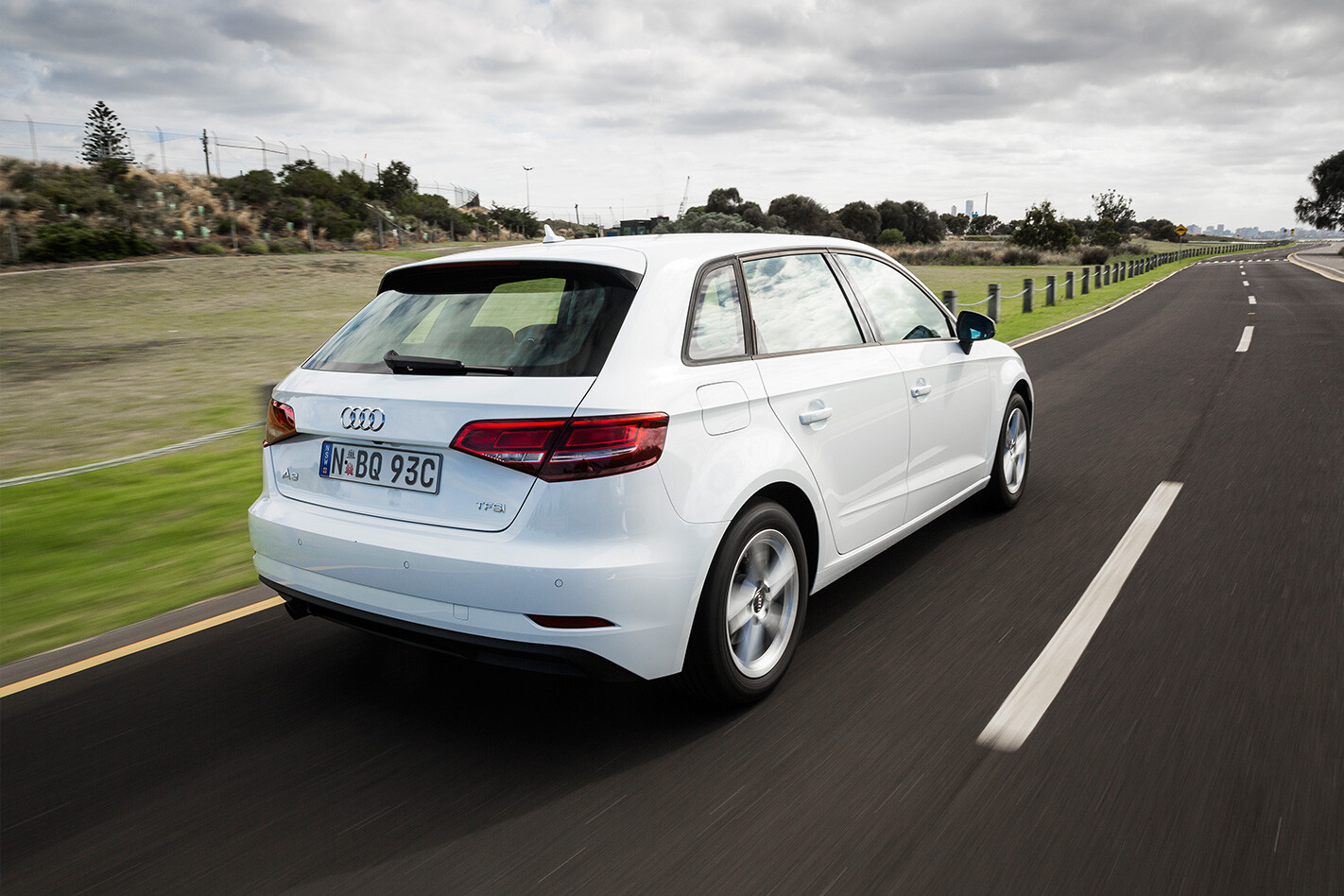 The A3’s three-cylinder has to work harder for its numbers, naturally, but it doesn’t feels as boost-heavy as you might expect a highly-strung, low-capacity, forced-induction engine to feel. If anything its power delivery is surprising in its linearity, and the offbeat three-cylinder note it generates is, though muted, a characterful sound.

When rolling the Benz’s engine feels perky and lively, with a bit more meat in the middle of its torque band that allows it to shrug off modest inclines that would have the A3 downshifting, but it’s the low-speed performance of its dual-clutch drivetrain that subtracts some marks. Sometime snatchy, sometimes sluggish to respond, the calibration could use some finessing.

With 18-inch alloys and low-profile rubber at each corner the A180 is far from cushy, but it’s got go kart dynamics courtesy of its focused MacPherson strut front and multi-link rear suspension.

Firm and tied-down, the A180 City Edition has a warm-hatch flavour in the way it hunkers down in corners and pivots. Its steering is also nicely weighted and reasonably fast in its gearing, further bolstering that sporty aura. Who knew that a base model could boogie like this? It kicks you in the bum over bigger bumps, such is its firmness, and the ride can be restless if the road has more than a few crinkles in its surface. It’s the trade-off for bling wheels and sharp handling, Higher-than-average road noise is also another blot on the A180’s scoresheet.

So the A3 is the more comfortable car then? Not quite. By fitting a penny-pinching torsion beam axle to the back of the entry-level A3 Sportback, Audi has spoiled the pliancy and ride quality found in regular multi-link-equipped A3 variants. It’s indisputably softer-sprung than the A-Class, but has a jittery response to corrugations while being a touch too reactive over high-amplitude bumps – even on the balloon sidewalls of its 16-inch tyres.

Overall, though the A-Class sacrifices some comfort for crisp handling, it nevertheless comes out ahead of the A3 thanks to its more secure and competent suspension.

Both cars are covered by three-year, unlimited-kilometre factory warranties, but only the Mercedes has a capped-price servicing scheme for scheduled maintenance. Applicable to the first three services, which are scheduled at intervals of 12 months or 25,000km, the A180’s first visit back to the dealership will cost $396, while the following two cost $792 apiece.

That tallies to a $1980 bill for the first three years or 75,000km of scheduled servicing on the Benz. However, while the Audi isn’t offered with capped-price servicing straight out of the box, Audi Australia does offer fixed-cost maintenance packages on its new cars. The Audi’s service intervals are set for 12 months or 15,000km, with the service package covering the first three of these at an overall cost of $1680. 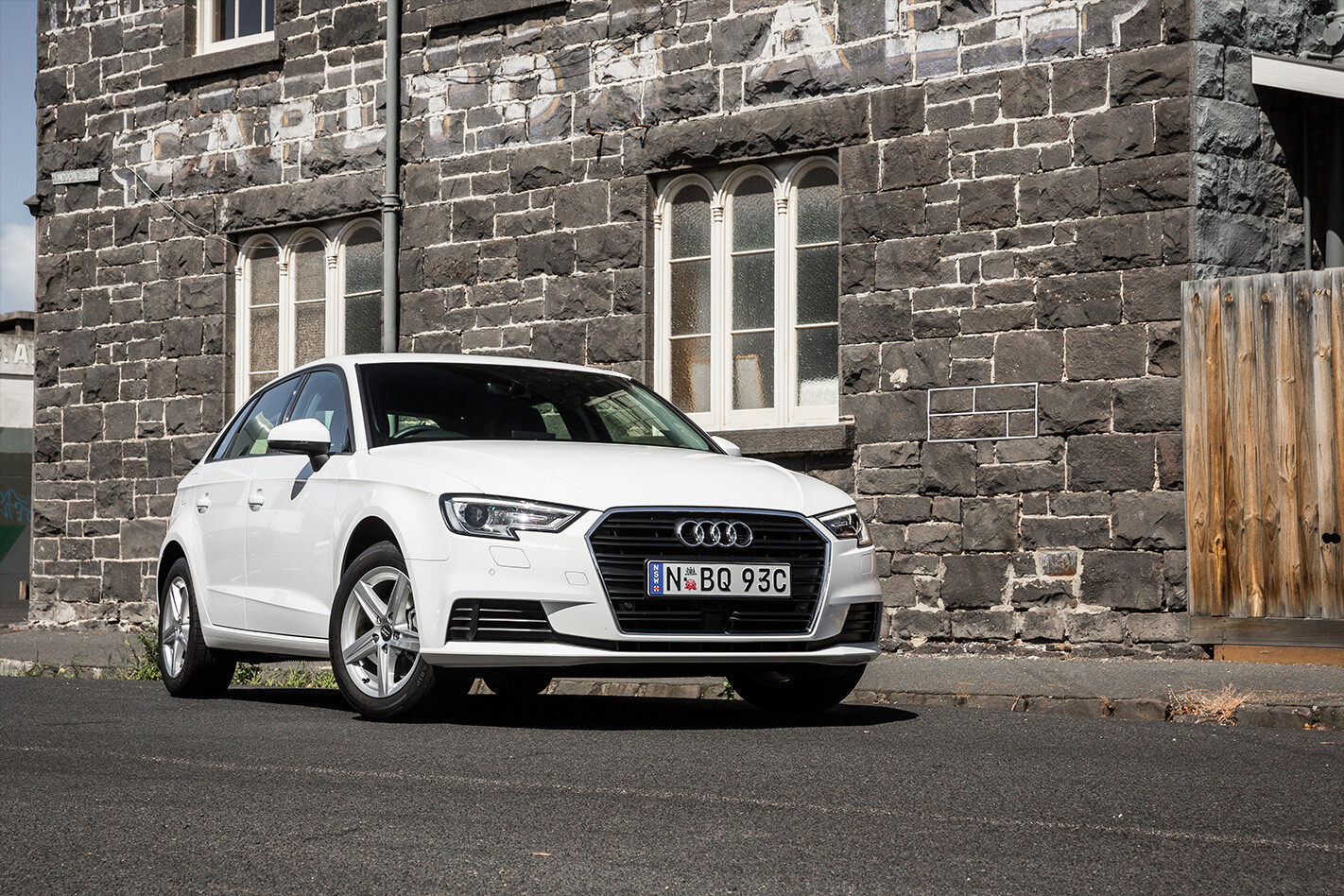 The Mercedes edges ahead of its Ingolstadt rival by virtue of its more sophisticated suspension and compelling value-for-money proposition. That’s not to say the A3 is without virtues – far from it, for its more welcoming cabin is a nice place to be even with boggo-grade cloth seats. However, its significant mechanical differences to the rest of the A3 range give it a down-at-heel character that very much lets you know that you’ve gone for the cheapest model in the range. The A180 City Edition is the very opposite. If getting an Audi badge in your driveway is all that matters to you then by all means go for the 1.0 TFSI, but if you want a solid sub-$40K small hatch with a little bit of luxe, the Mercedes does a better job.