One foot after the other, modified Jeeps are changing the 4X4 game.

From the very first time a cylinder fired, sending drive to a wheel, the world of off-road transportation has been slowly but steadily evolving. Each new model takes what was built by the last generation and adds to it. The worst aspects are removed; the best amplified and expanded – all with a clear lineage, if you look hard enough.

No brand flaunts its heritage more than Jeep, and this is evident in every inch of the two wild American rigs seen here. There’s perhaps no greater example of continuous, albeit slow, vehicle evolution than this pigeon pair of black, newer than new and tougher than tough Wranglers: one JL, one JT, and both a direct result of what came before them. 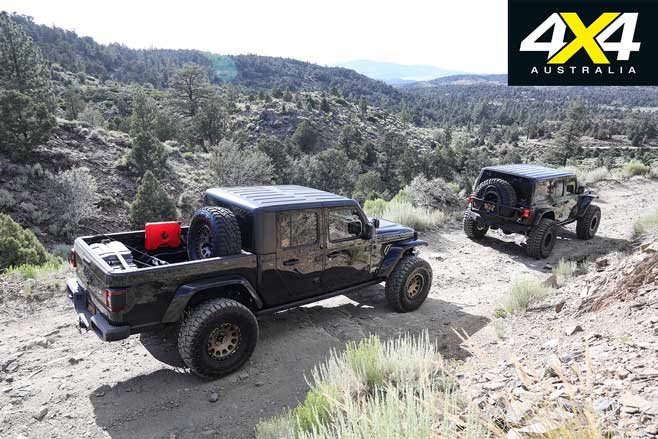 Alfred is the owner of the JL Wrangler, a five-door wagon evolved from the game-changing JK Wrangler Unlimited. Evelyn is the woman behind the wheel of what is undoubtedly the most capable off-road ute on the market, the recently released JT Gladiator, which in turn is the next step in the Wrangler platform’s progression. Of course, evolution doesn’t just happen on the production line, and both of these Jeeps have progressed far beyond the factory versions of themselves.

Starting underneath (because that’s what really counts on a Jeep) both rigs have had a comprehensive overhaul. The JT Gladiator now sits closer to the heavens thanks to a levelling kit from iconic aftermarket Jeep manufacturer EVO MFG.

The Stage 1 kit gives the long-wheelbase ute a full 2.5-inch ride-height increase thanks to in-house developed springs. To help make the most of the newfound ride height and travel, extended brake lines have been included in the kit, with bump-stop spacers front and rear keeping a healthy distance between tyre and fender, and adjustable trackbars getting things back in line. 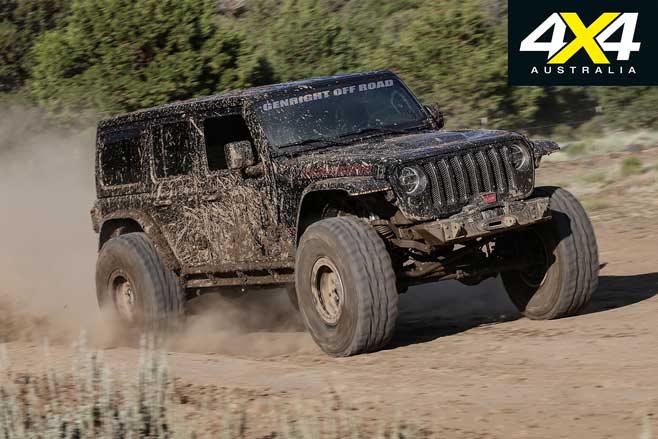 Alfred’s JL Wrangler takes things to a whole new level. On each corner externally adjustable King 2.5-inch shocks not only allow Alfred to dial in his ride height, but to change suspension stiffness depending on whether he’s hitting slow-speed rocks for a night run, or bombing across the desert.

Sitting 3.5 inches higher than stock thanks to dual-rate Metal Cloak coil springs, EVO MFG adjustable control arms were needed to help dial the caster and pinion angles back to acceptable limits, while Currie Anti-Rock swaybars have been fitted front and rear to help keep the body stable without eating into valuable articulation.

Due to the height increase, both front and rear trackbars pulled the axles out of alignment, so adjustable units from Rock Krawler have been installed to give Alfred the ability to push them back into location while providing a solid strength upgrade in the process. 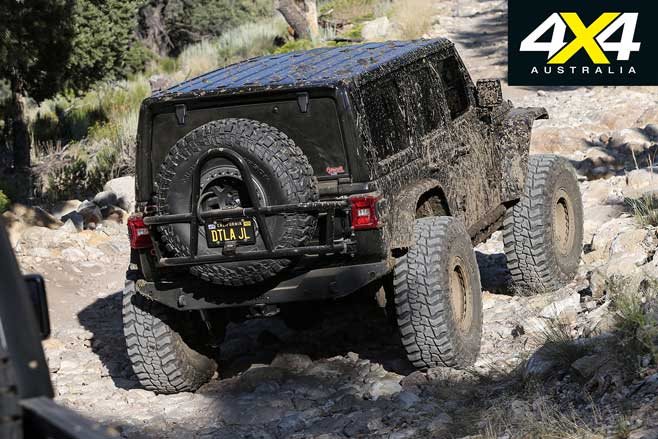 Eagle-eyed readers may notice hydraulic bump stops from DV8 Offroad peeking through the mud-covered undercarriage. An evolution of off-road race products, these are a seriously high-end piece of kit, smoothing out any big hits the Jeep comes across at speed, and giving it a silky-smooth ride no matter how rough the terrain.

Of course, all that work isn’t done just for bragging rights. Both rigs are now sporting ‘straight to gaol’ tyres … at least in Australia they would be. Evelyn’s JT Gladiator wears a set of Toyo Open Country R/Ts punching in at 37x13.5R17. They’re wrapped around bronze Method ‘105’ beadlock alloy wheels, the mechanical locking ring allowing her to drop down to single-digit pressures for an absolutely monstrous footprint.

Not to be outdone, Alfred’s JL Wrangler is packing serious heat in the rubber department too. The brand-new Mickey Thompson Baja Boss hoops punch in at an eye-watering 40x13.5R17, which is a full
15 per cent taller than a typical 35-inch tyre. Alfred’s also sporting beadlocked alloys on each corner, this time KMC’s renowned Machete XD229, but in this case their usual machine finish is covered in a heavy-duty STEEL-IT black and grey coating. 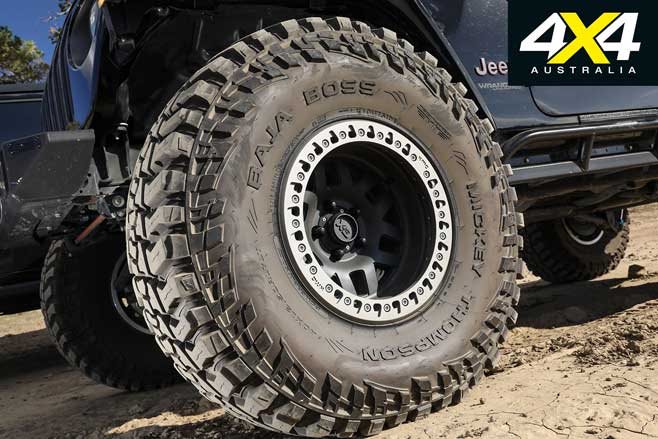 Moving onto the armour, both rigs have split paths again, with the Wrangler focussed on hardcore wheeling while the Gladiator is a seriously capable do-it-all rig for the trail or the weekend hardware store run.

Evelyn’s rig features a steel bumper from Artec Industries up front. Pieced together from solid chunks of ¼-inch plate, the bumper and stinger combo not only provides serious frontal protection, but also provides a little extra protection in the event of a front rollover, as the stinger is designed to catch a forward tilt, or help slide the nose up steep rock steps. 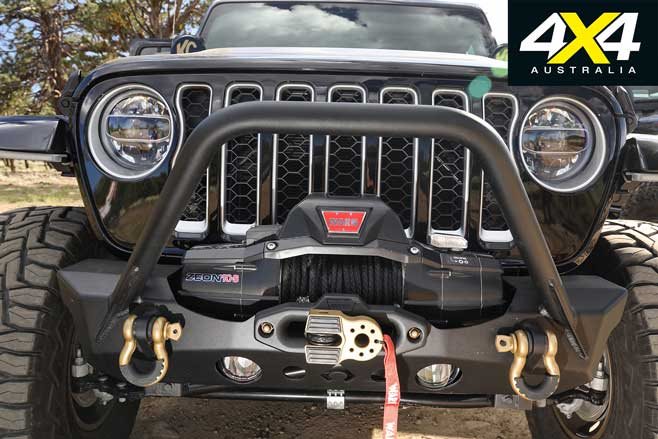 Moving down the flanks, Evelyn’s Gladiator has been gifted a considerable boost in approach angle; an American Adventure Fab Lab high-fender kit has replaced the distinct JL/JT fender indicators with slimline LED versions giving a higher fender approach, and the front tyres a straight shoot at obstacles.

The Gladiator’s aesthetics package is rounded out with a pair of KC highlights 6 Pro ditch lights mounted at the bottom of the A-pillars, and a Wilco off-road tyre carrier at the back of the cab.

Alfred’s JL Wrangler has a similar package, although a little less everyday and a little more rock crawler. Up front a Genright ultra clearance stubby bumper teams up with another American Fab Labs high-fender kit for maximum approach angle. 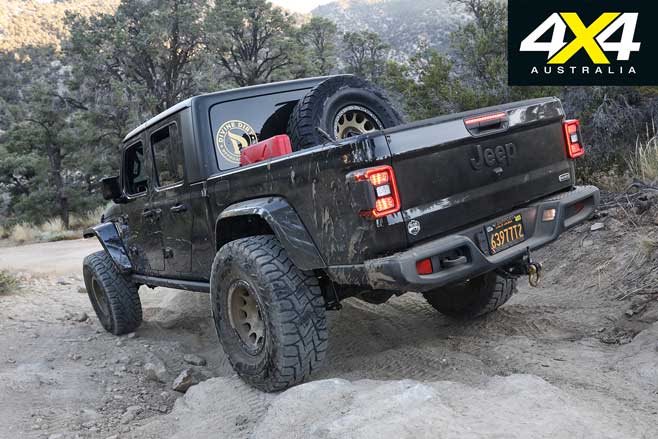 Housed within is Warn’s top-tier Zeon 10S Platinum winch with a pair of integrated recovery points on either side. Matching Genright rock sliders sit high and tight to the body for all-out clearance without sacrificing strength, while a Genright alloy rear bumper helps keep weight down and clearance up. It’s topped off with a heavy-duty swing-out tyre carrier mounted to the body and holding the massive 40-inch spare.

On the mechanical front both Jeeps remain fairly simple, the Gladiator running a full Borla exhaust system, the Wrangler running an oil catch-can to help with side angles. That’s about it for the V6 petrol engines.

It might seem strange that such modified vehicles underneath are reasonably stock in the engine bay, but it’s fitting for the evolution of Jeep. When you’re climbing endless rock ledges and exploring the back country of America’s West Coast, suspension and tyres are what’ll get you home, while the engine’s really just needed to turn it all. 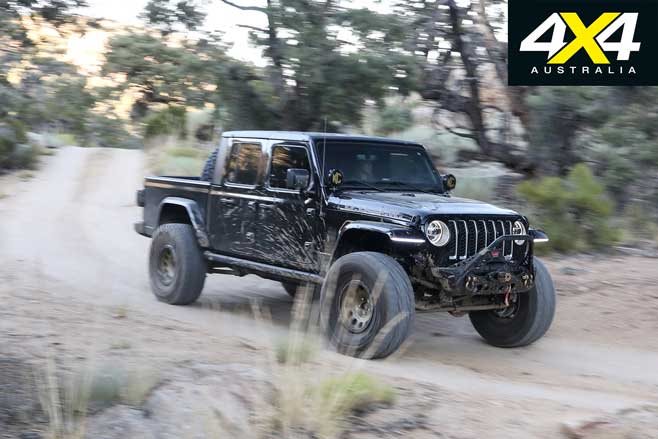 That said, evolution never really ends. It’s something Jeep has proved time and time again, and so have their owners. If you come across either of these rigs out on the trails they’ll have no doubt evolved again. After all, it’s just a part of four-wheeling. 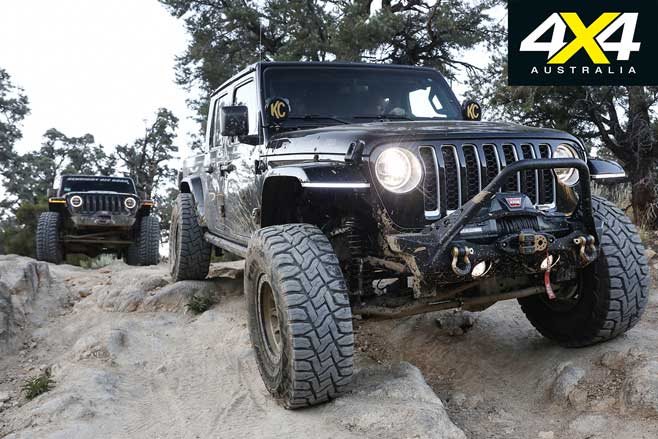 Jeep has never shied away from its heritage. In fact, it flaunts its history and its progress at every possible moment. While you probably wouldn’t have noticed much more than the iconic seven-slot grille in these two rigs, Jeep has hidden countless throwbacks to its past deep inside.

The most obvious is the Wrangler silhouette in the windscreen’s edge, but there’s also a seven-slot grille behind the rear view mirror, as well as numerous Xs throughout the interior and exterior of most 4x4s in the Jeep line-up, a throwback to the military jerry cans strapped to the side of early generation Jeeps.

That military history comes up again with the JL Wrangler sporting a Morse code printout of JL under the rear auxiliary power outlet. There are plenty more Easter eggs throughout these rigs, from thongs on the windscreen wipers to a Yeti trekking up a mountain, but Jeep’s heritage is always front and centre. 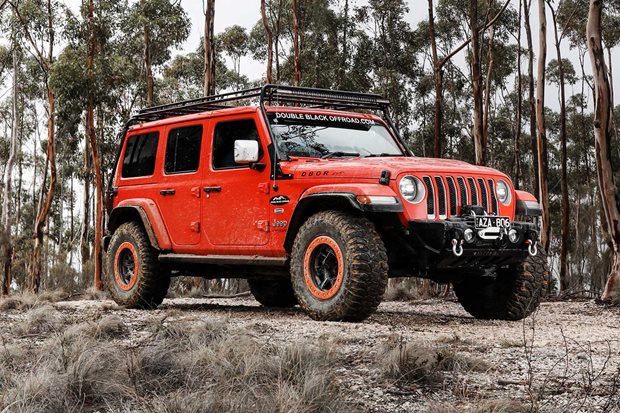 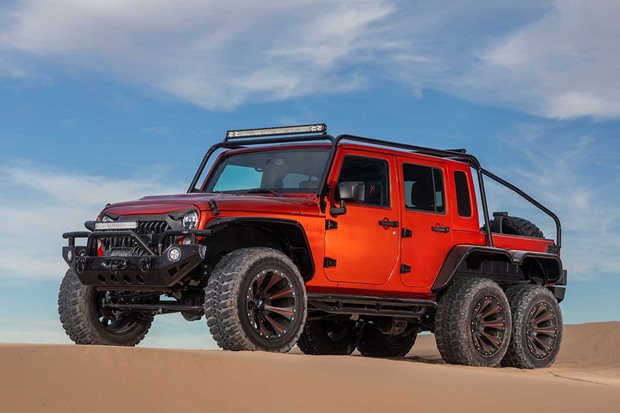 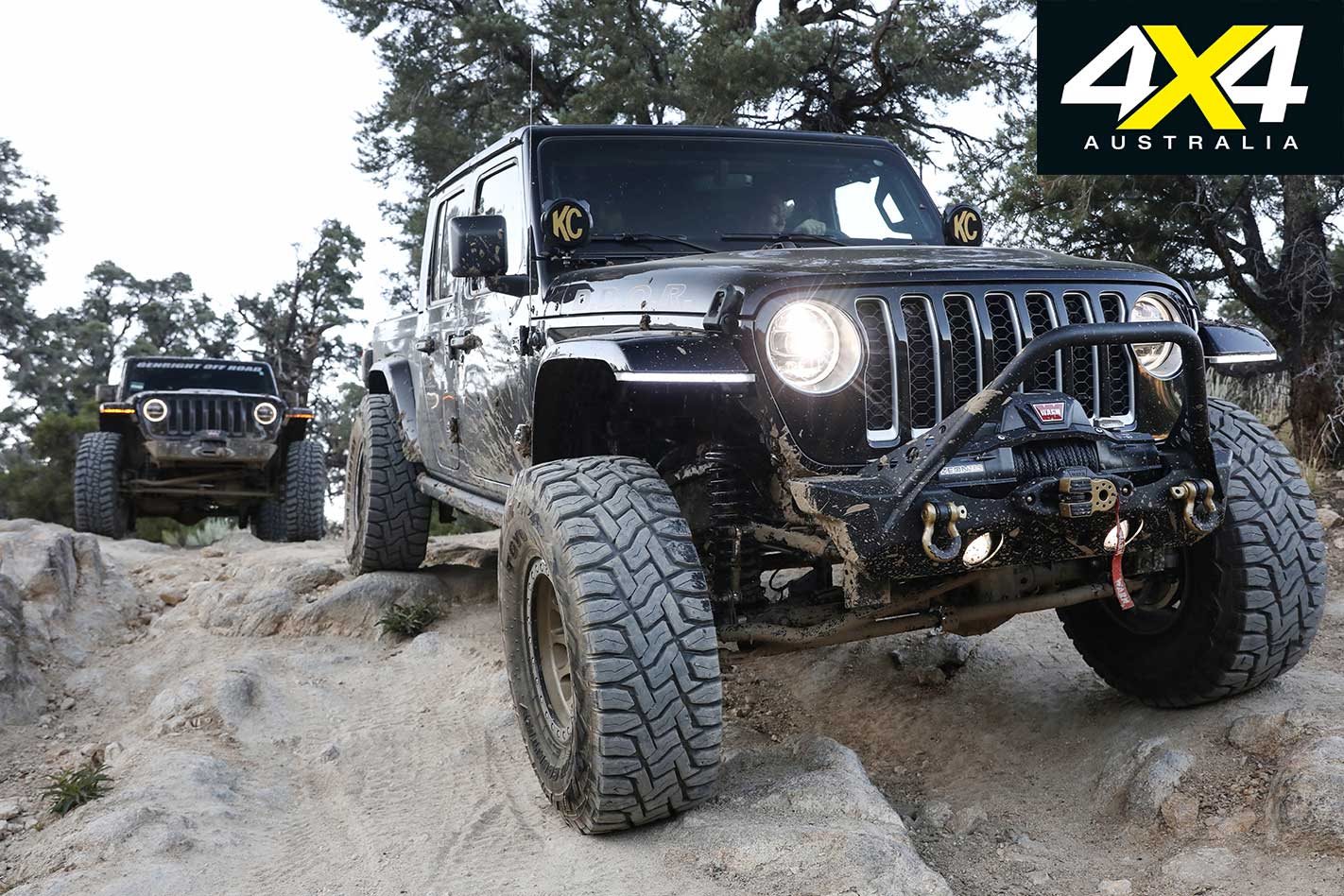 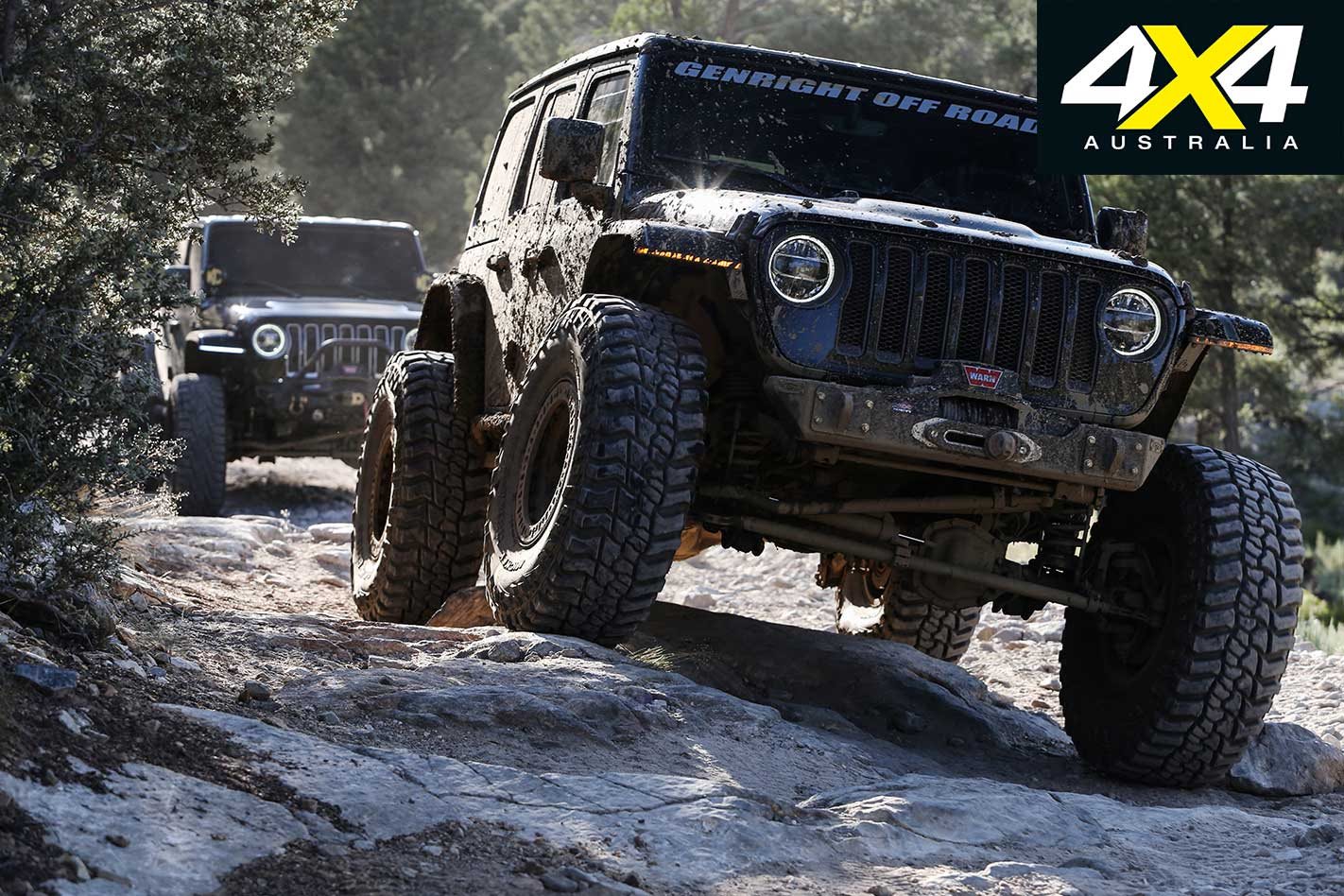 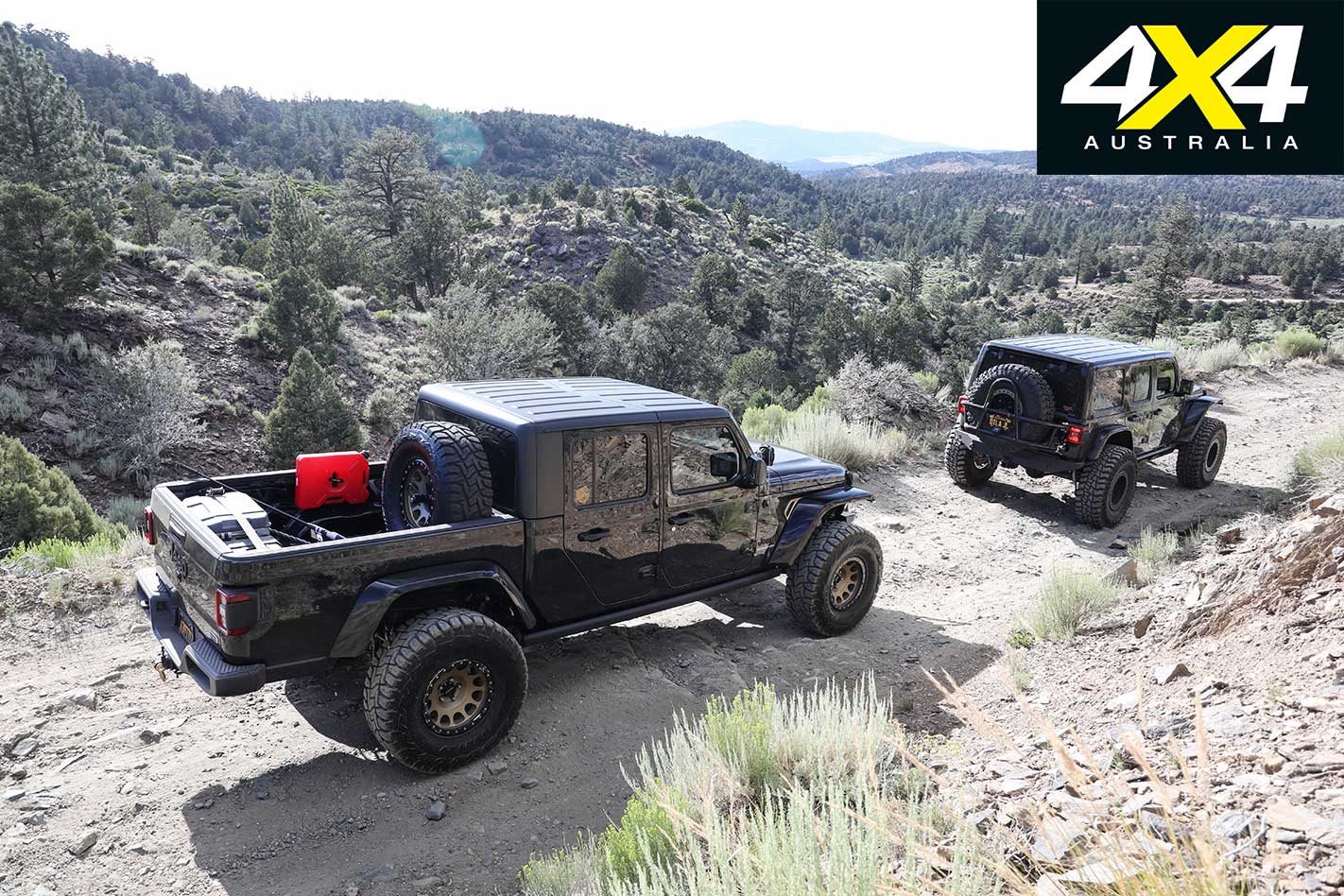 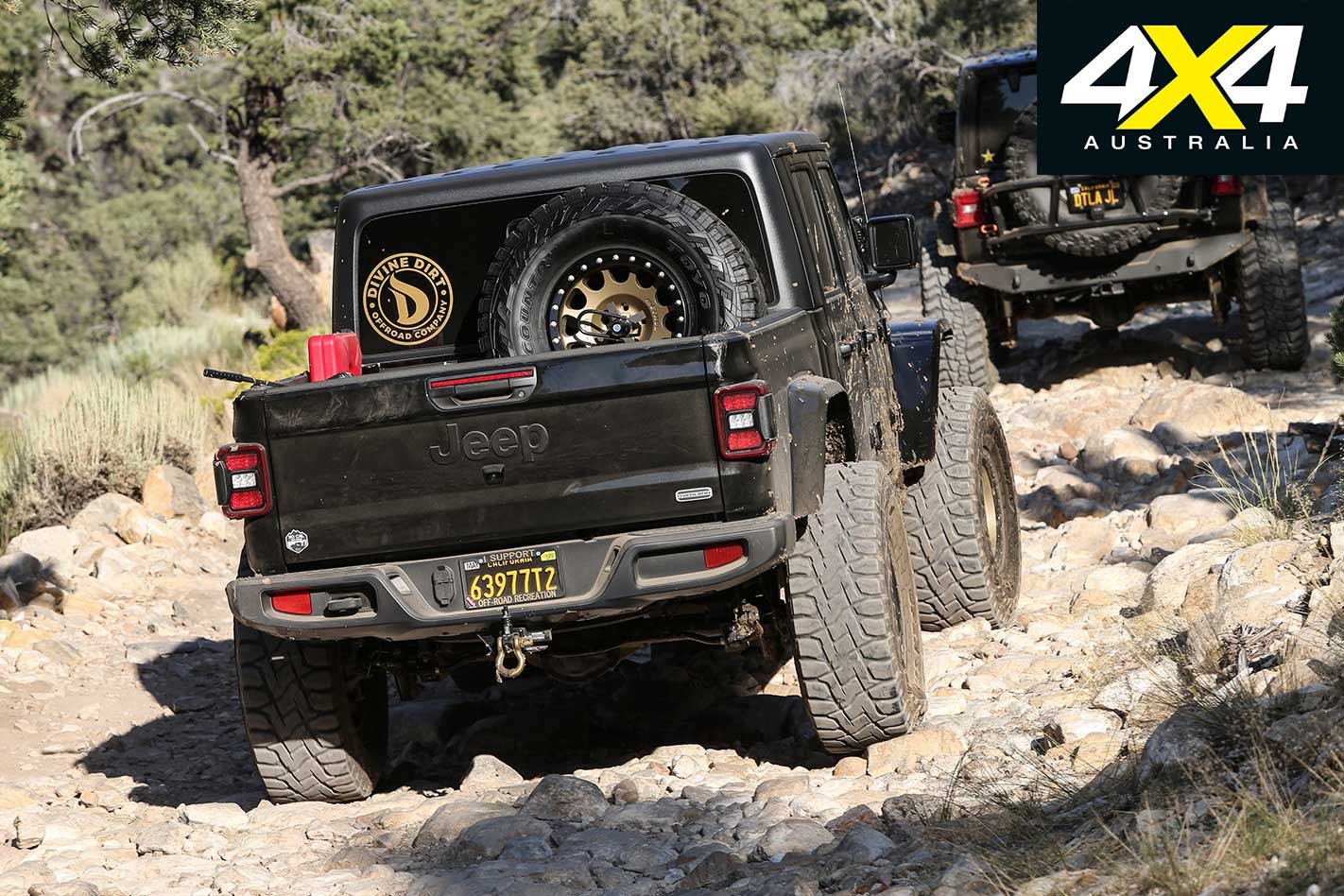 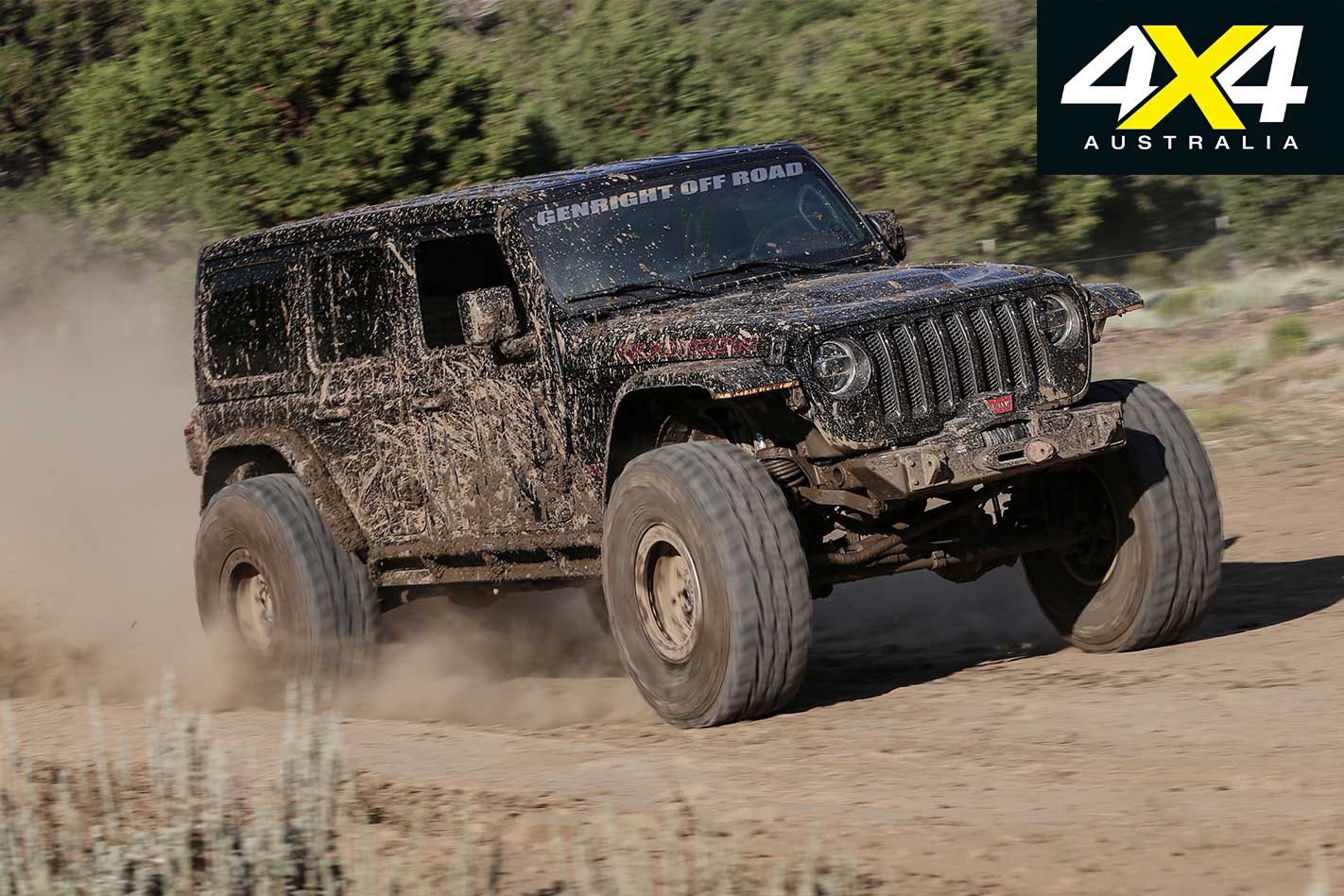 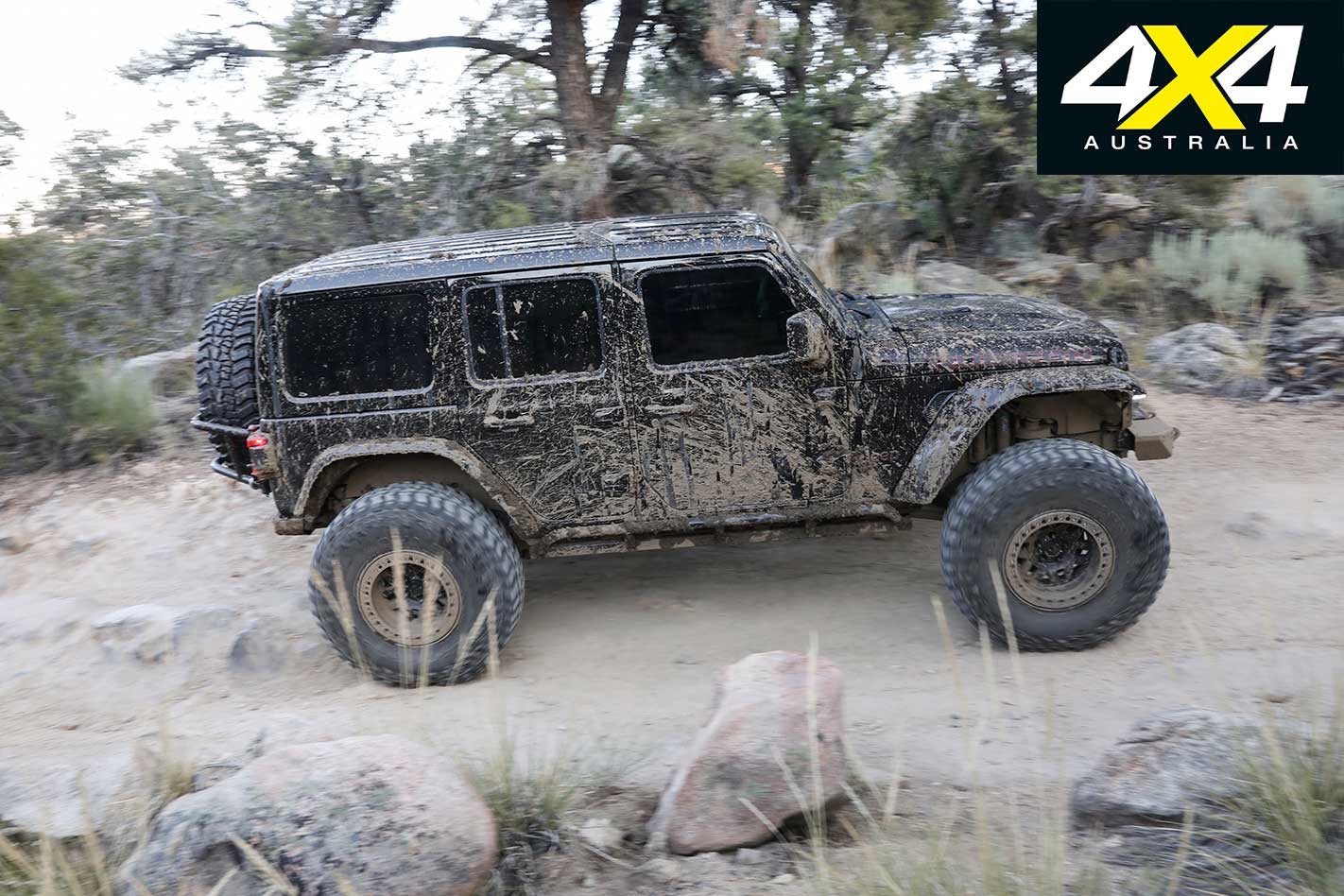 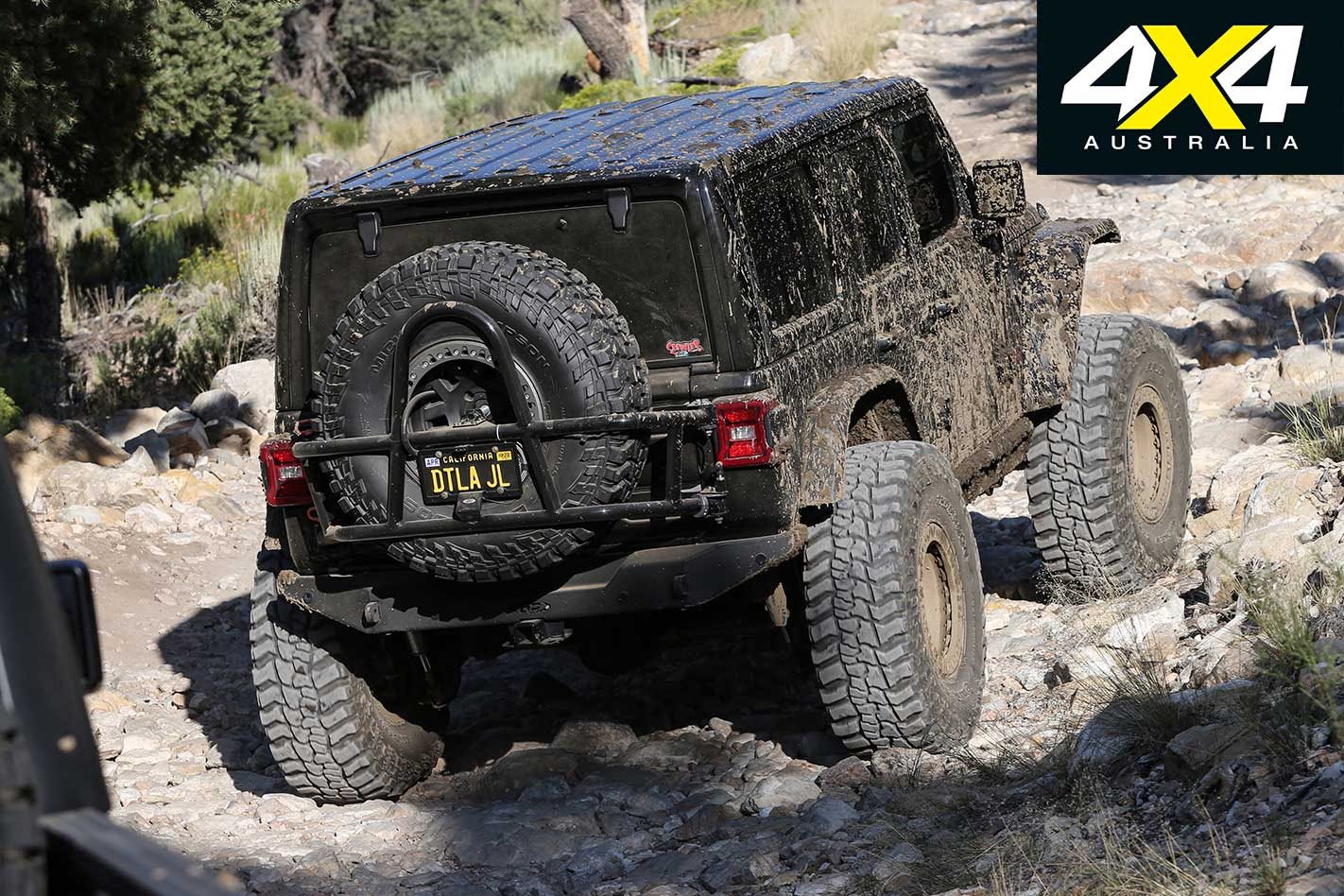 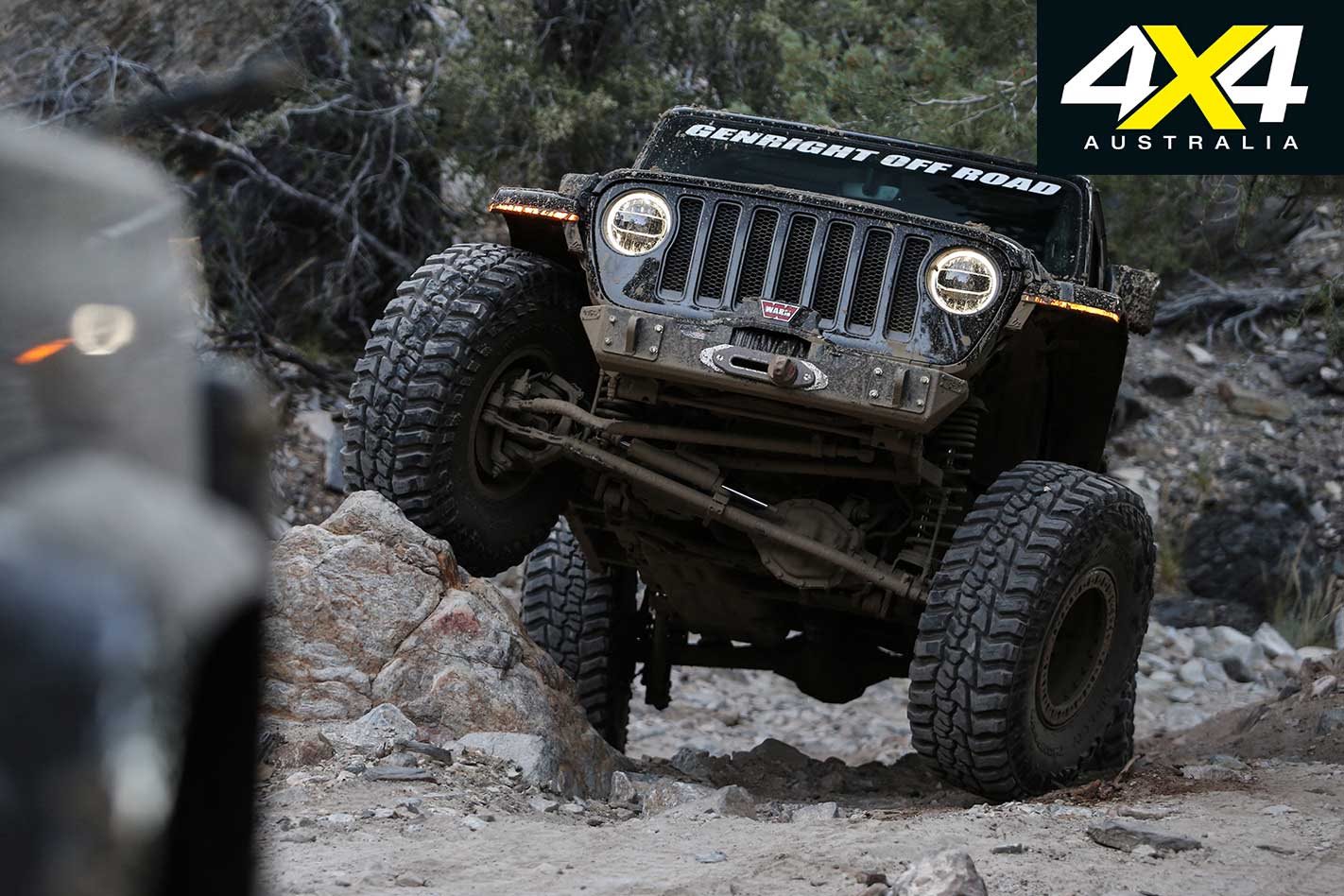 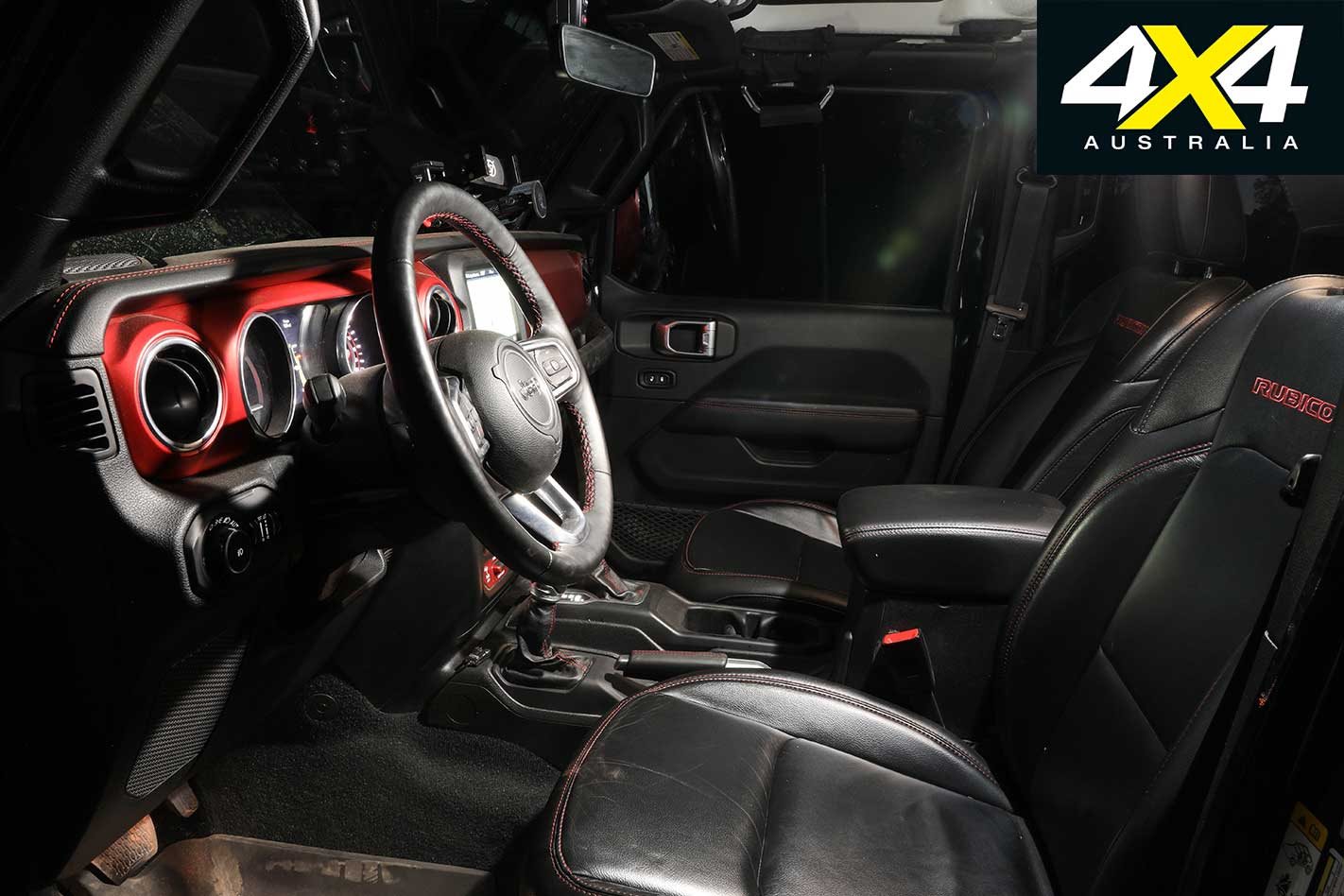 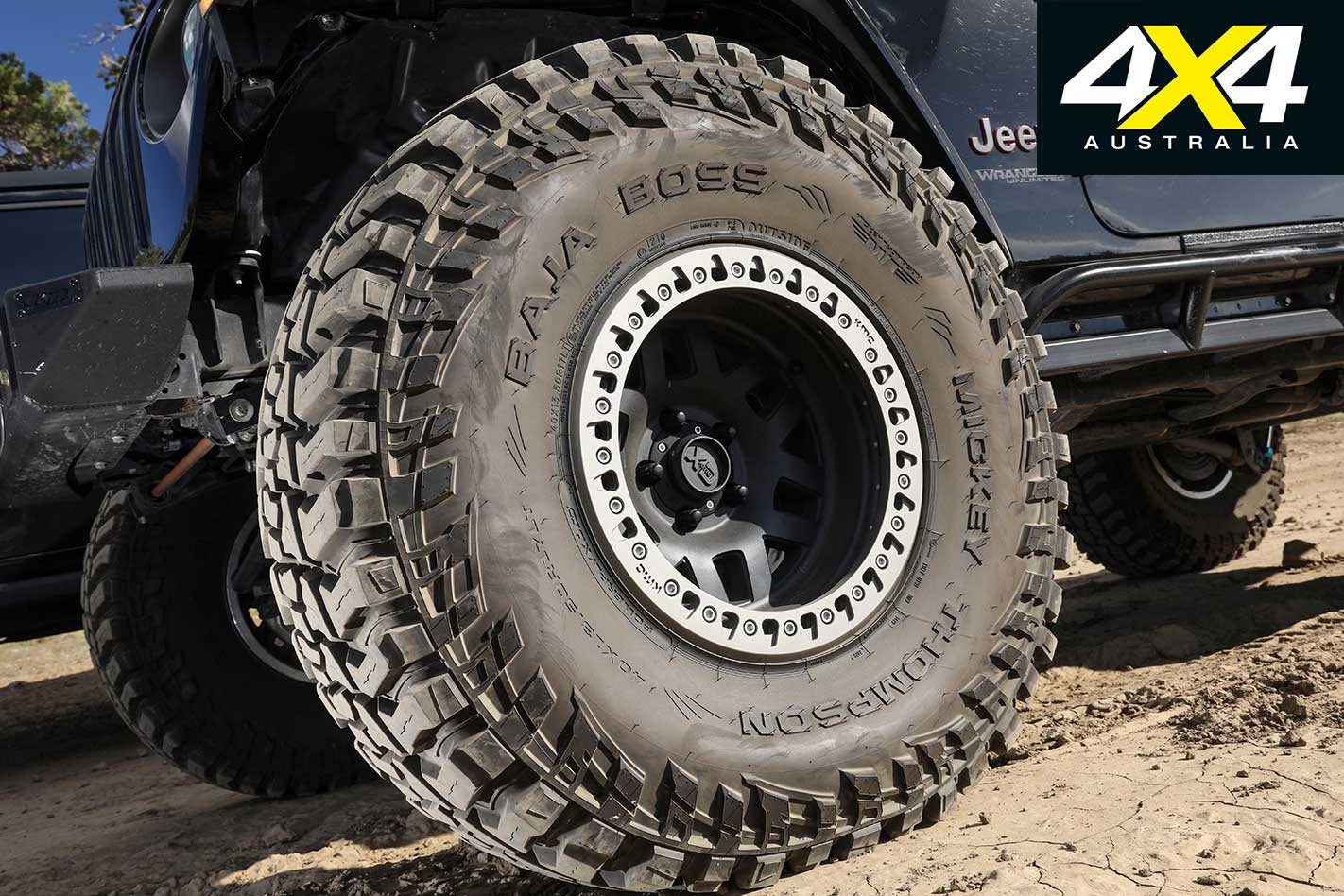 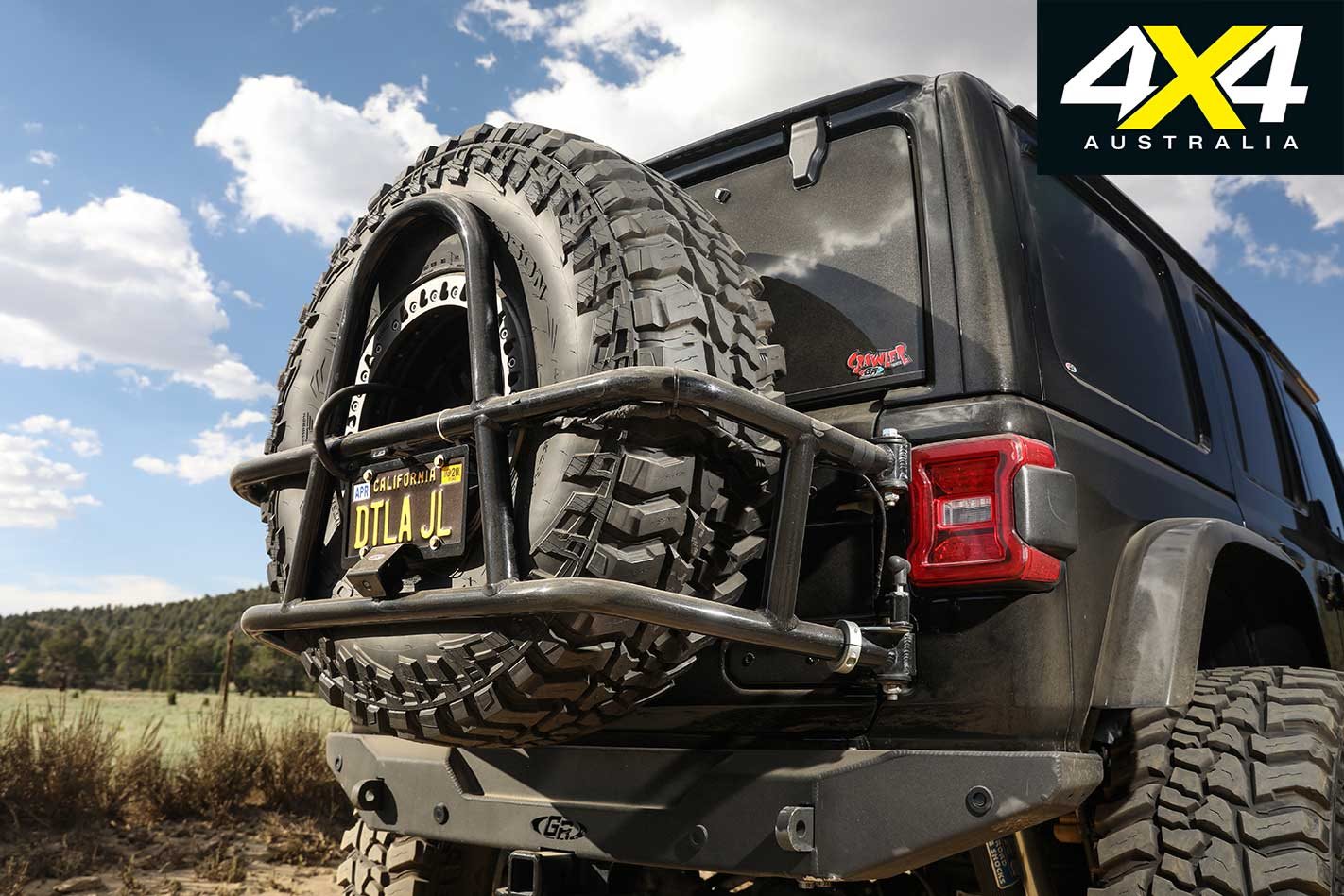 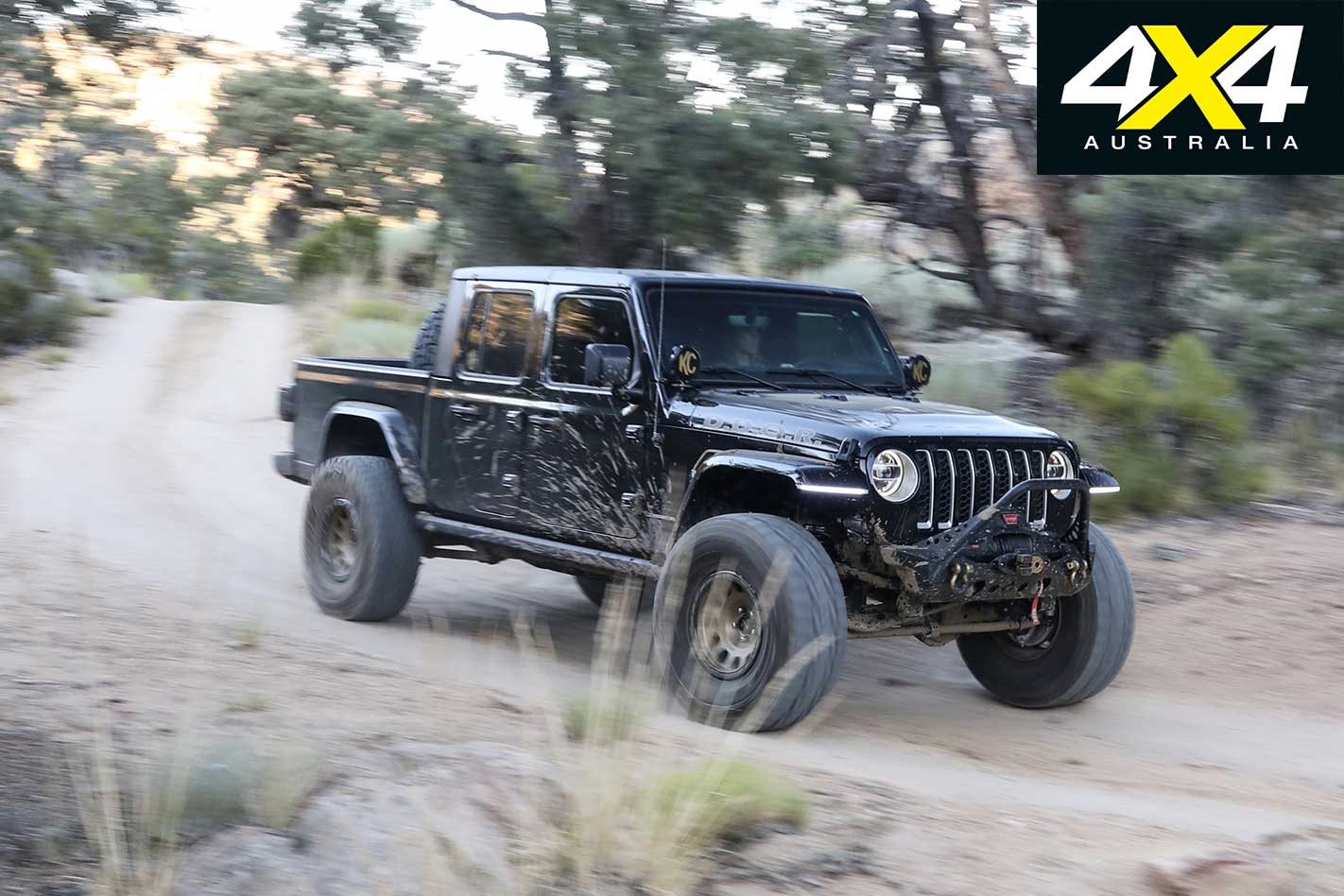 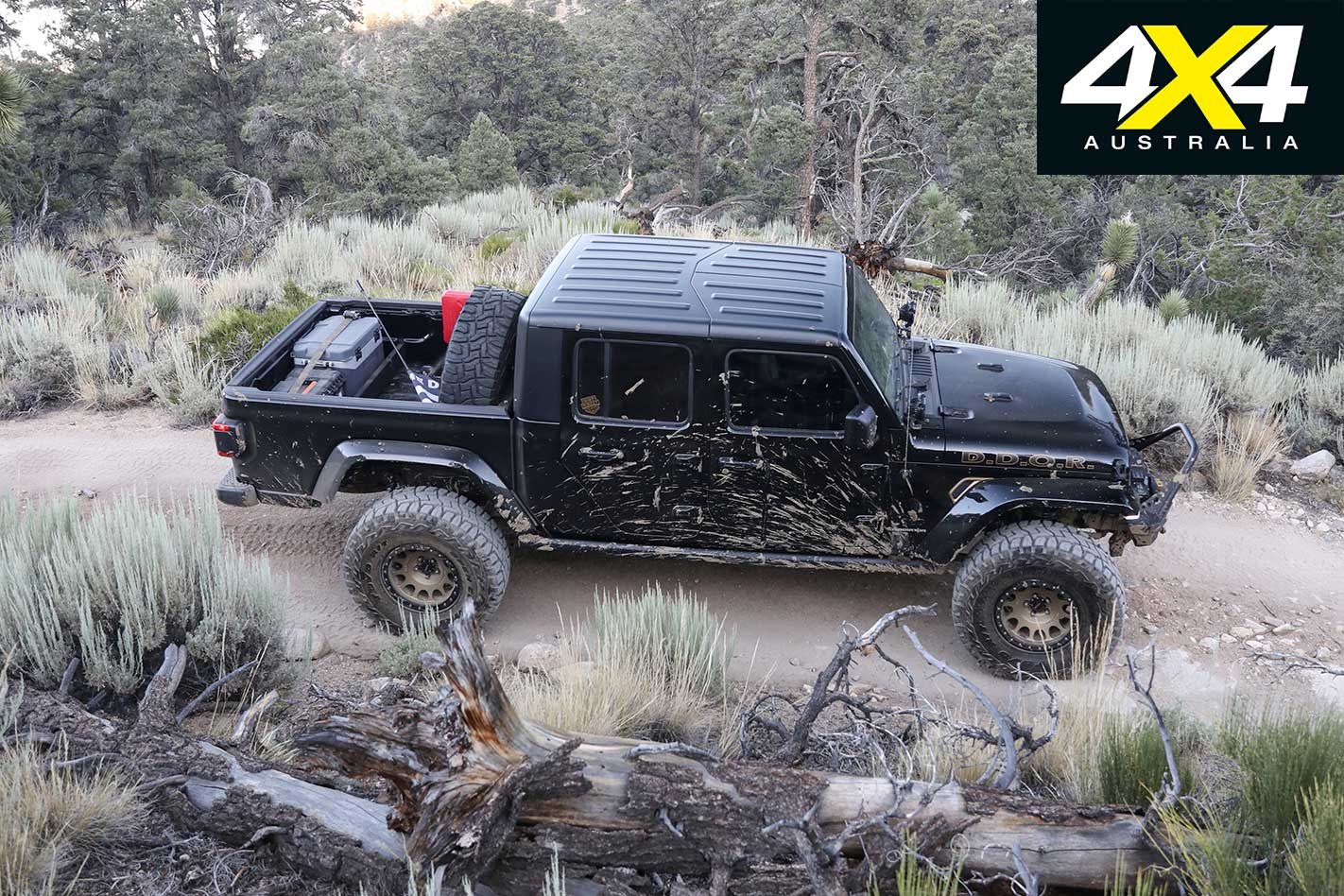 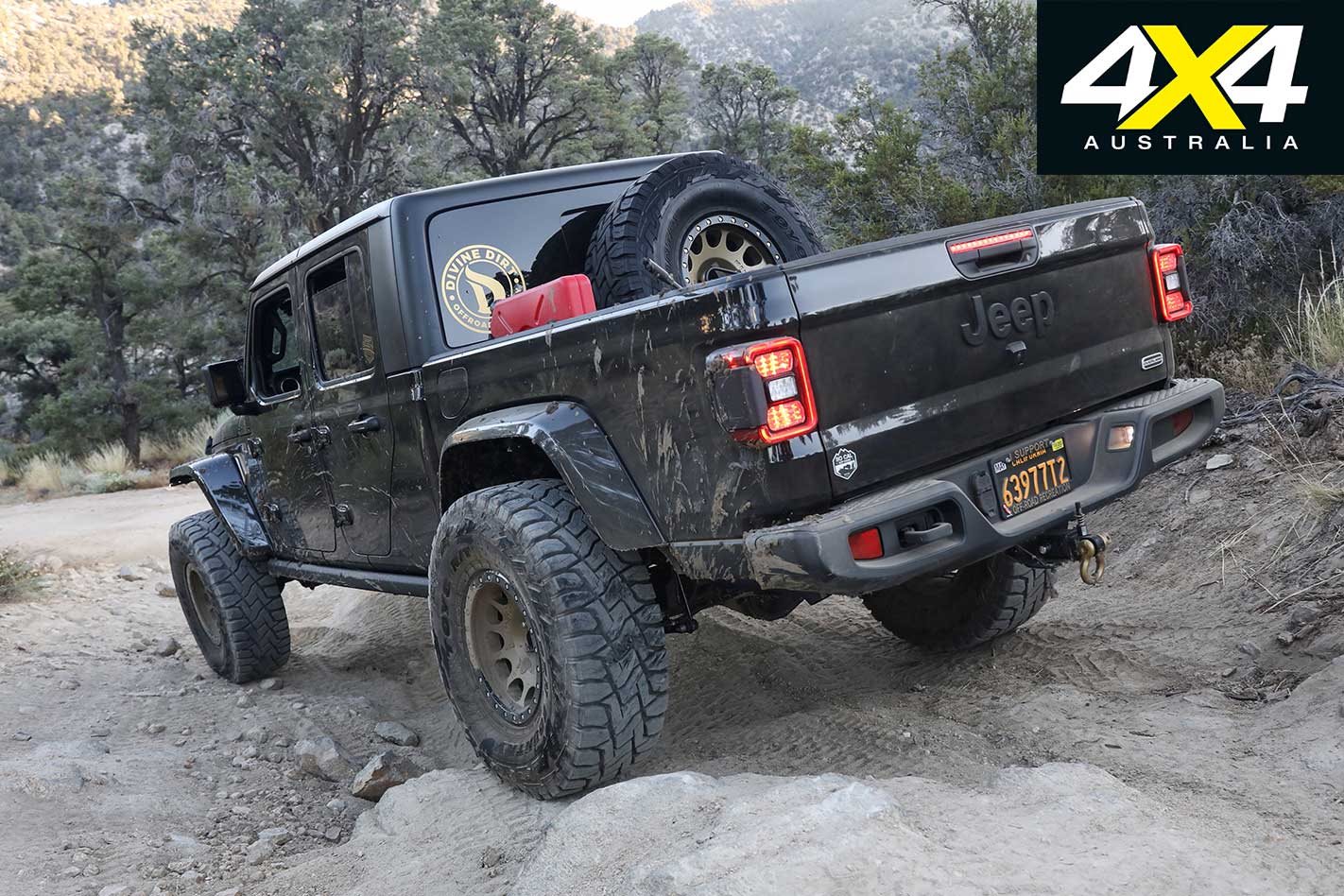 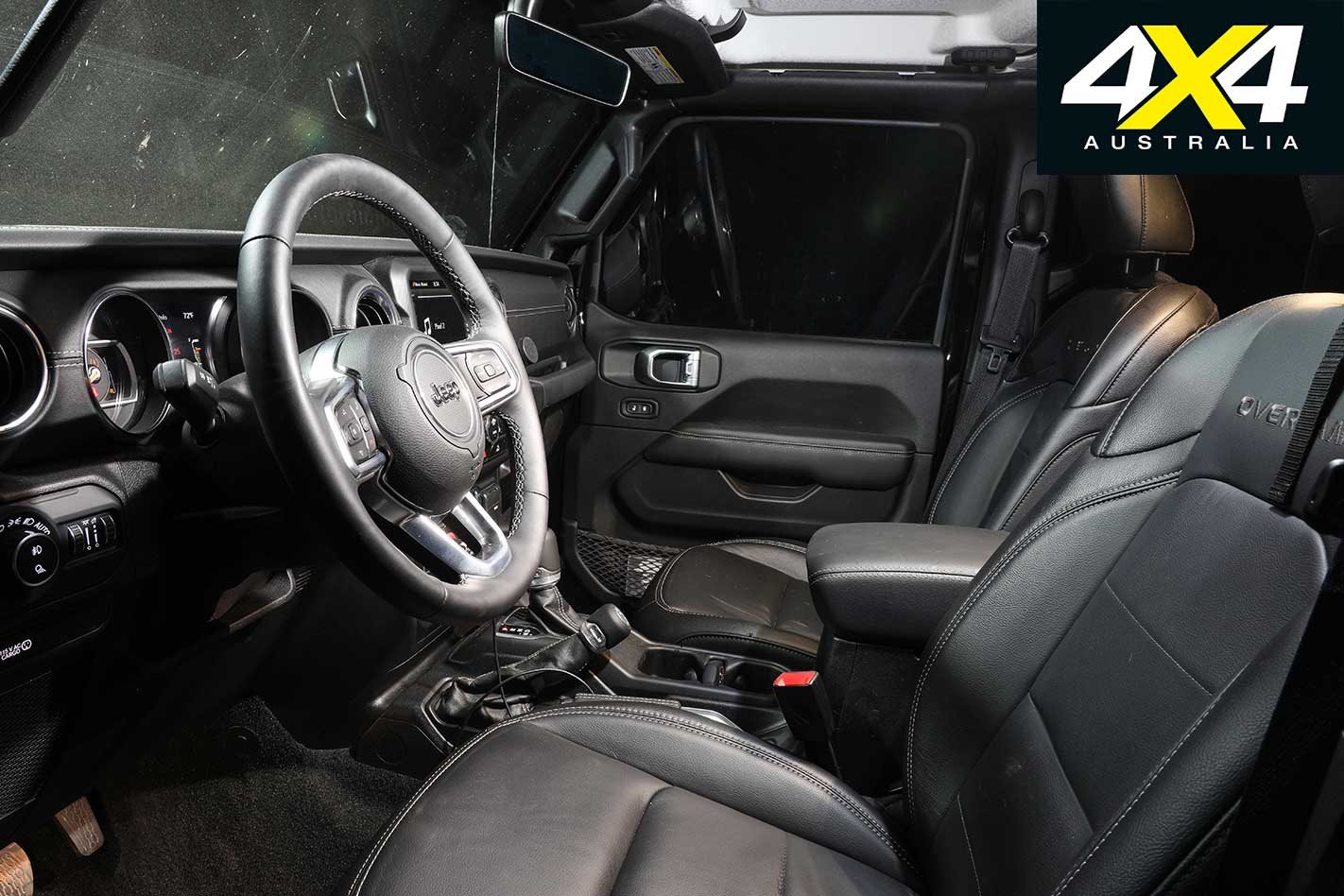 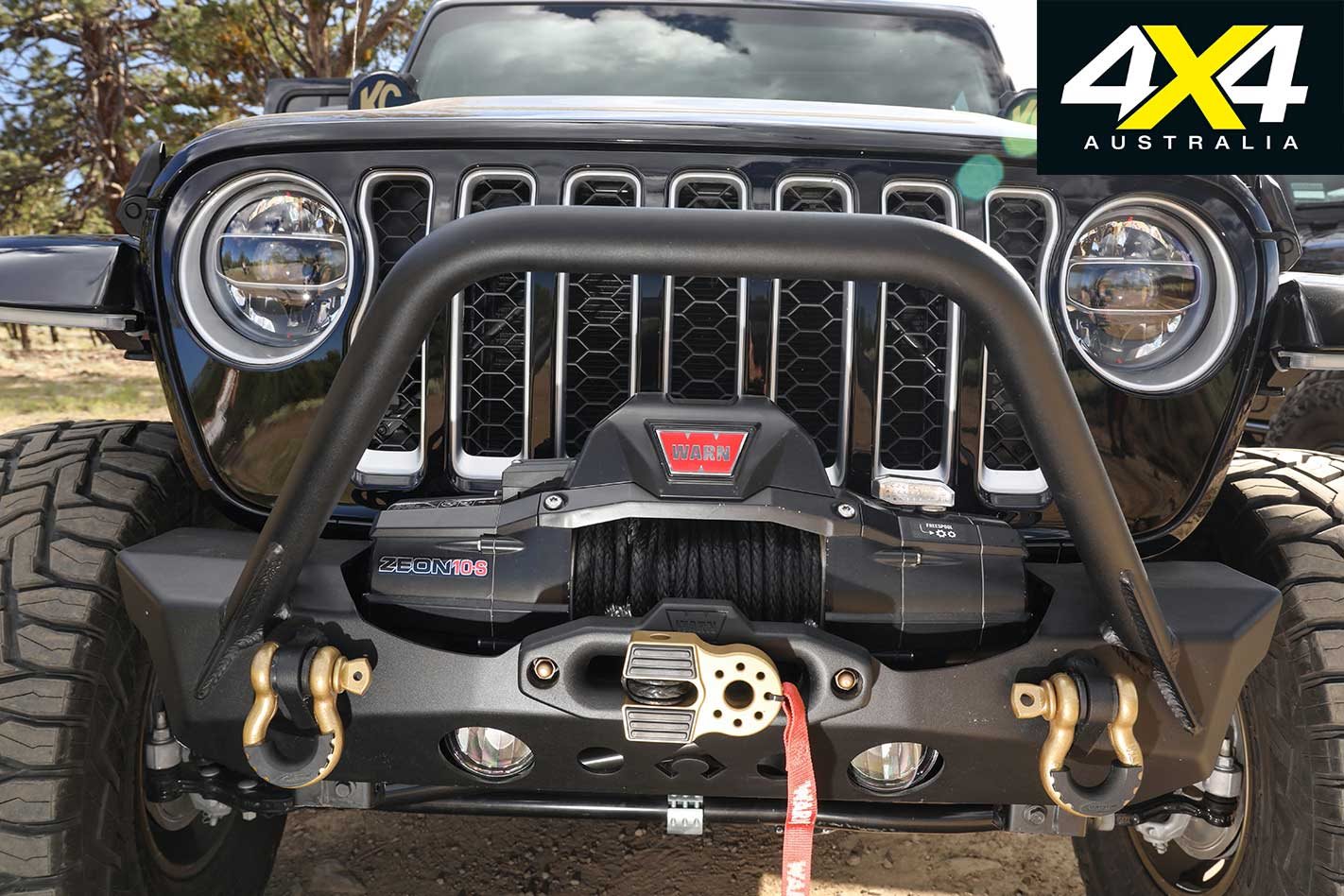 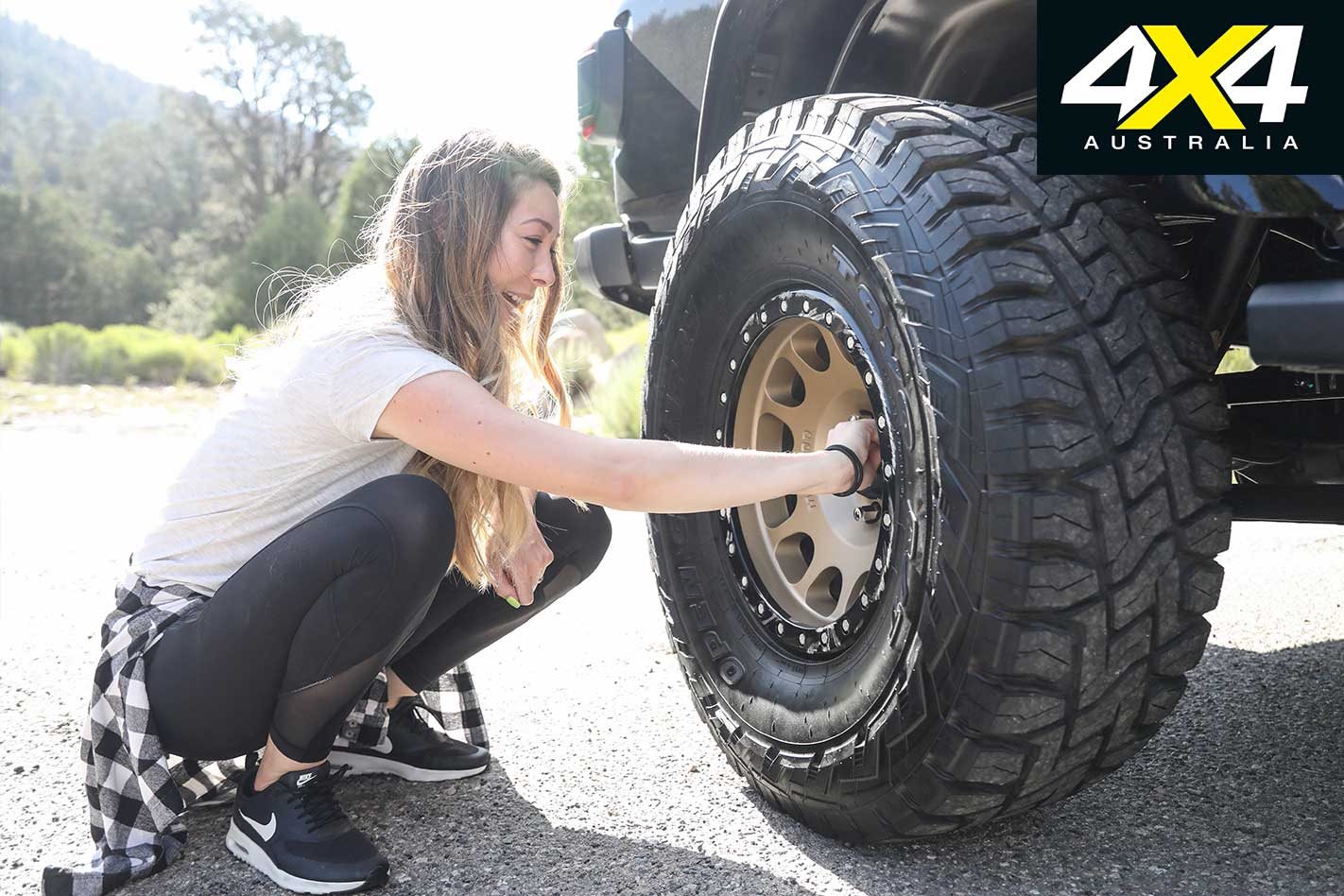 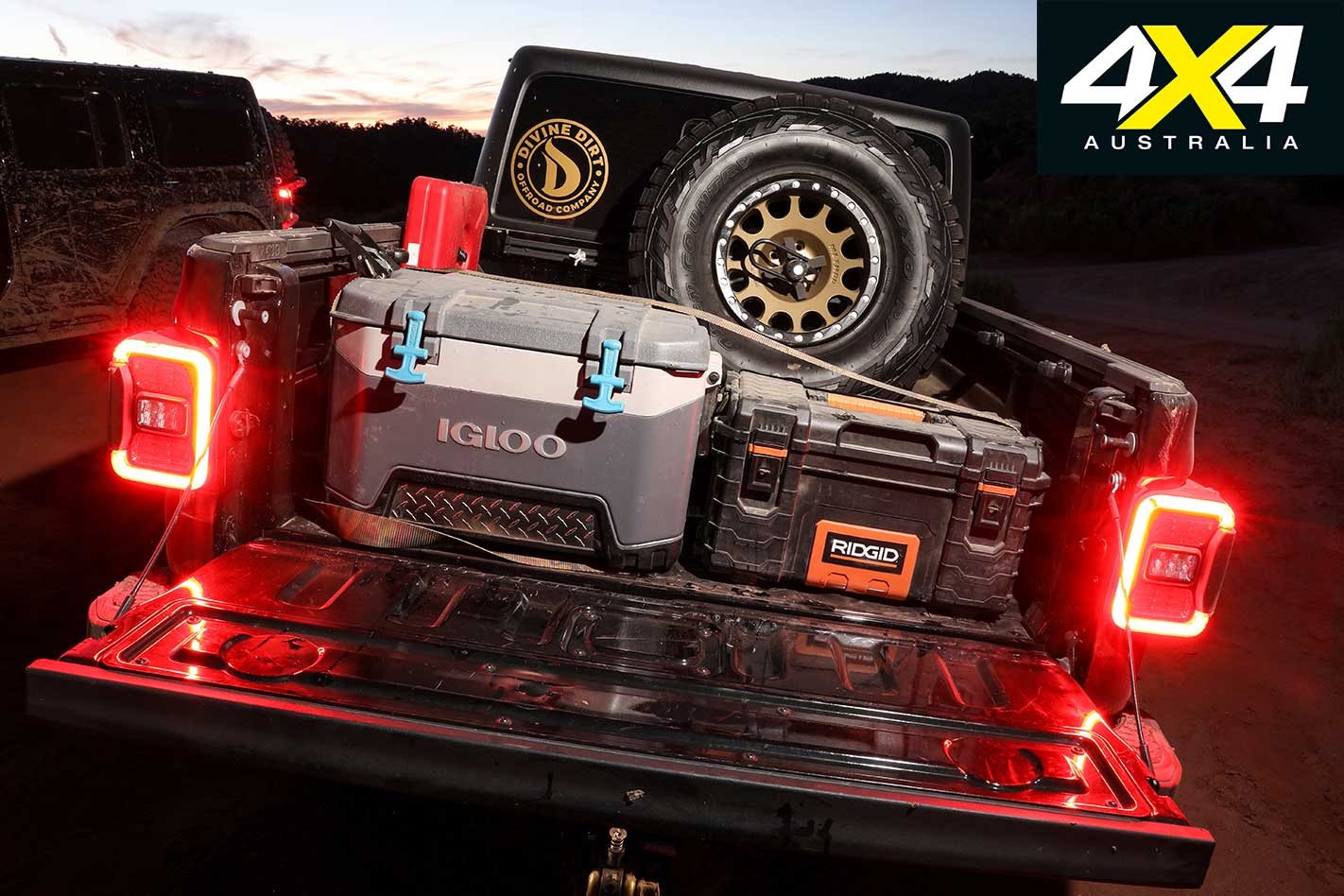